Rolex’s Yacht-Master series emerged in the early nineties, touted as a nautically-themed luxury lifestyle offering, against the all-out professional tools of the brand’s dive trio.

Although quite clearly cut from the same mold as the Submariner (and there were even rumors it was originally dreamt up back in the eighties as a possible replacement for the legendary Sub), it has always set itself apart with its softer, more graceful lines and choice of materials. The closest you’ll find to the utility of steel here is when it’s being gentrified by the presence of Rolex’s own 18K gold in their Rolesor models or their platinum in the Rolesium versions, a combination that actually made its debut with the first wave of Rolex Yacht-Master watches.

Precious metals don’t come cheap and the YM has consequently not had the same universal mass appeal as some others in the Oyster Professional range, and it has always purposely avoided going too sporty, aiming itself instead at an altogether more elite audience. Those who, for example, may own luxury yachts. 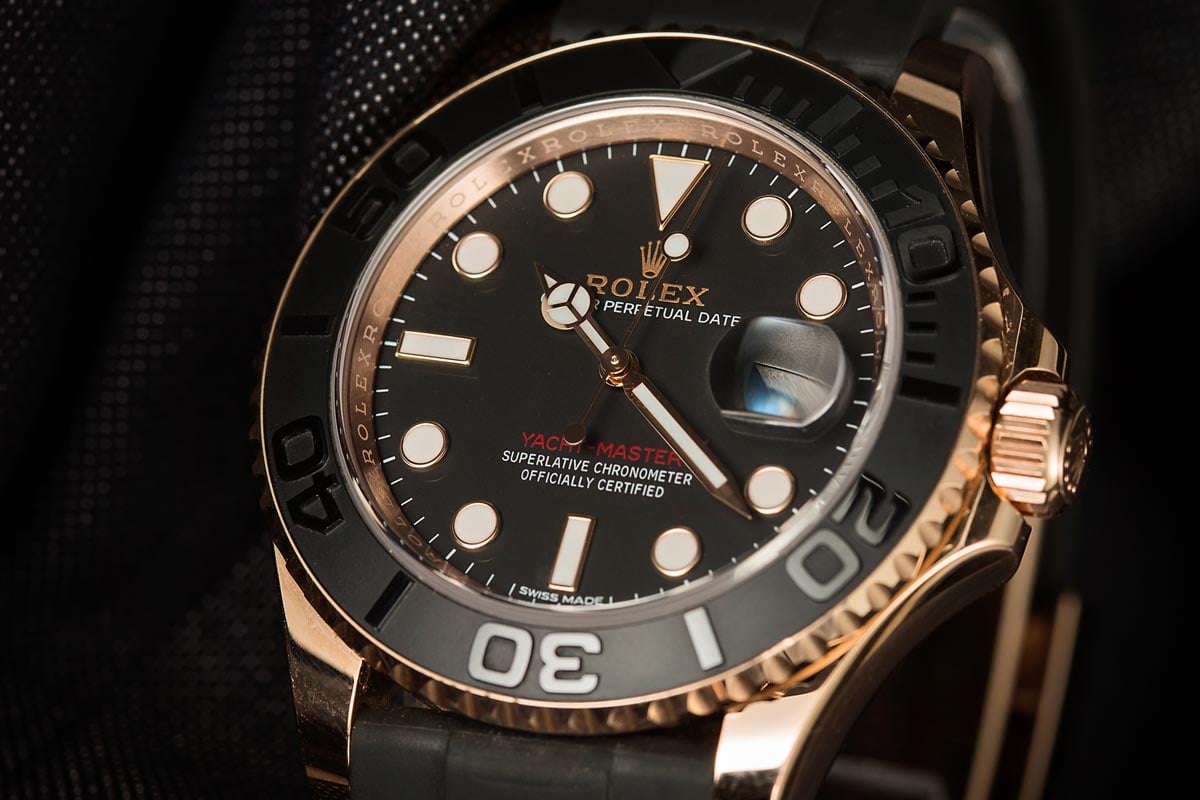 Then, in 2015, a new model with a whole host of surprises up its sleeve made its grand entrance. The Yacht-Master reference 116655 brought with it a number of firsts, not just for the Yacht-Master range, but for Rolex itself.

Taking the series as a whole in a completely new direction, this latest addition seemed to be looking to bridge the gap between opulence and activity, sitting comfortably in the mix amid the dressiness of the Datejust on one side and the functionality of the Submariner on the other.

As a result, it arrived with a look unlike anything else in the lineup and quickly developed into one of the most talked about watches of the year. Replacing the conspicuous gleam of gold and platinum bezels for the low-key, let’s just say it, sexiness of matte black Cerachrom, together with Rolex’s first ever rubber strap (yes, you read that right) it became the brand’s poster child for stealth wealth.

Let’s take a look at one of Rolex’s most interesting and beautifully balanced masterpieces. 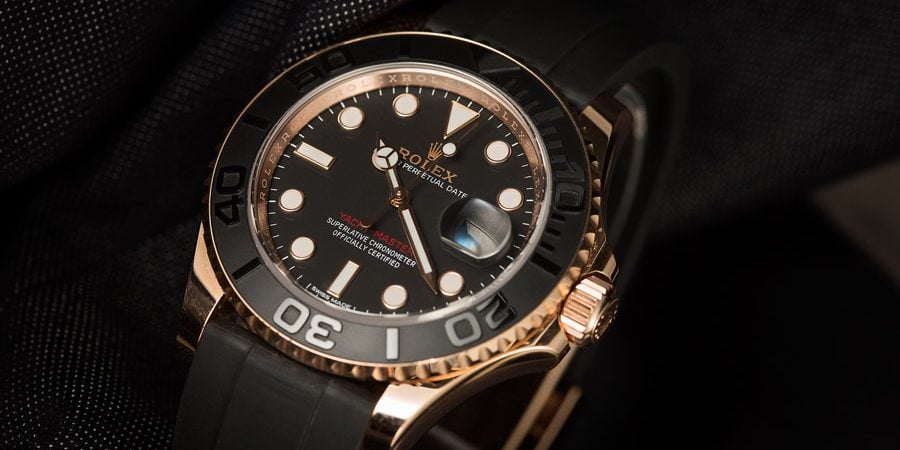 With a number of unique variables this watch becomes high on our list.

Set it down next to any of the other models in the Yacht-Master family and you’d be forgiven for thinking you were looking at an entirely different range of watches altogether.

While their bezels have always featured embossed numerals, as opposed to the engraved ones favored by the rest of the brand’s catalog, the contrast between the high polish of the three-dimensional markings against that gloriously muted, sandblasted ceramic gives an altogether more dramatic effect. It’s a look that has been echoed across onto the face, the first Yacht-Master to feature a black dial, again replacing what is typically a glossy element on other similarly colored Rolex watches.

Juxtaposing against the luscious glow of the elegantly curved 18k Everose case, Rolex’s own blend of gold and copper with a dash of platinum to seal it all in, it underlines the ref. 116655’s status as the best of both worlds. Dressy enough for the yacht club; sporty enough for the yacht race. 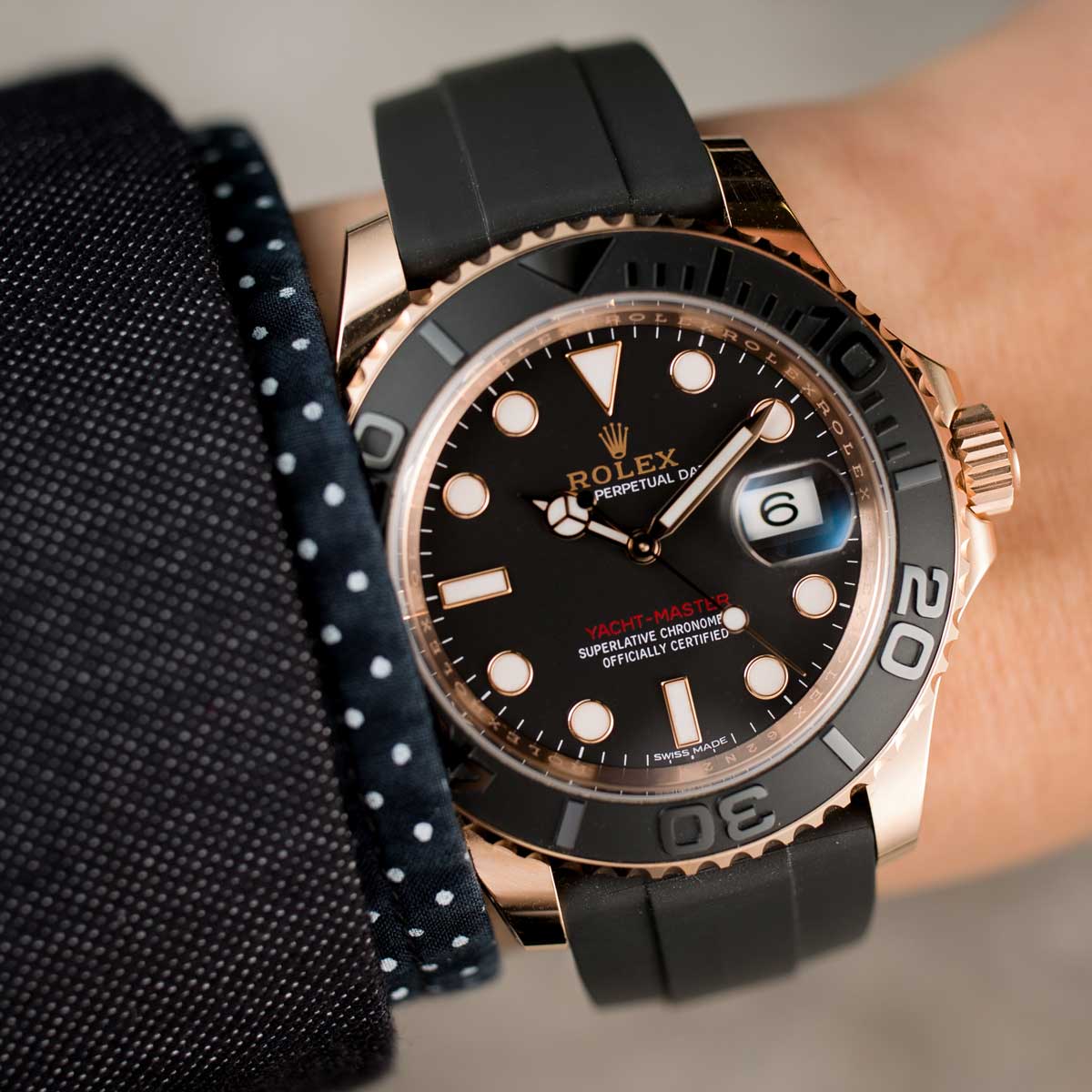 The Yacht-Master 40 on the wrist is very comfortable.

As you would expect from the Swiss colossus, calling their Oysterflex bracelet a rubber strap is a bit like calling a Rolls Royce a car. Yes, technically, but there’s a little more to it than that.

At its core is a blade forged from an alloy of titanium and nickel, around which is molded a high performance, hypoallergenic elastomer. It means, not only is the bracelet exceptionally resistant to environmental rigors, it’s free to form itself to the shape of the wearer’s wrist, while retaining all the strength of any of the brand’s metal bands.

It is an extremely comfortable wear, made even more so by the addition of a pair of ‘fins’ underneath that both cushion and support the watch while also providing a vent to allow air in, cooling the wrist on warm days. All secured by the same Oysterlock clasp as you’ll find in the majority of Rolex’s sports models, it comes with the 5mm Easylink extension system for a spot of fine-tuning.

The only drawback compared to, say, the traditional Oyster bracelet is obviously in making larger adjustments. There are no links to add or remove and, unlike other rubber straps, cutting it to size isn’t an option thanks to the metal core. Rolex offer a choice of bracelet size at the time of purchase, but it does mean you won’t be able to lend your watch to anyone with significantly bigger or smaller wrists than you. Oh well! 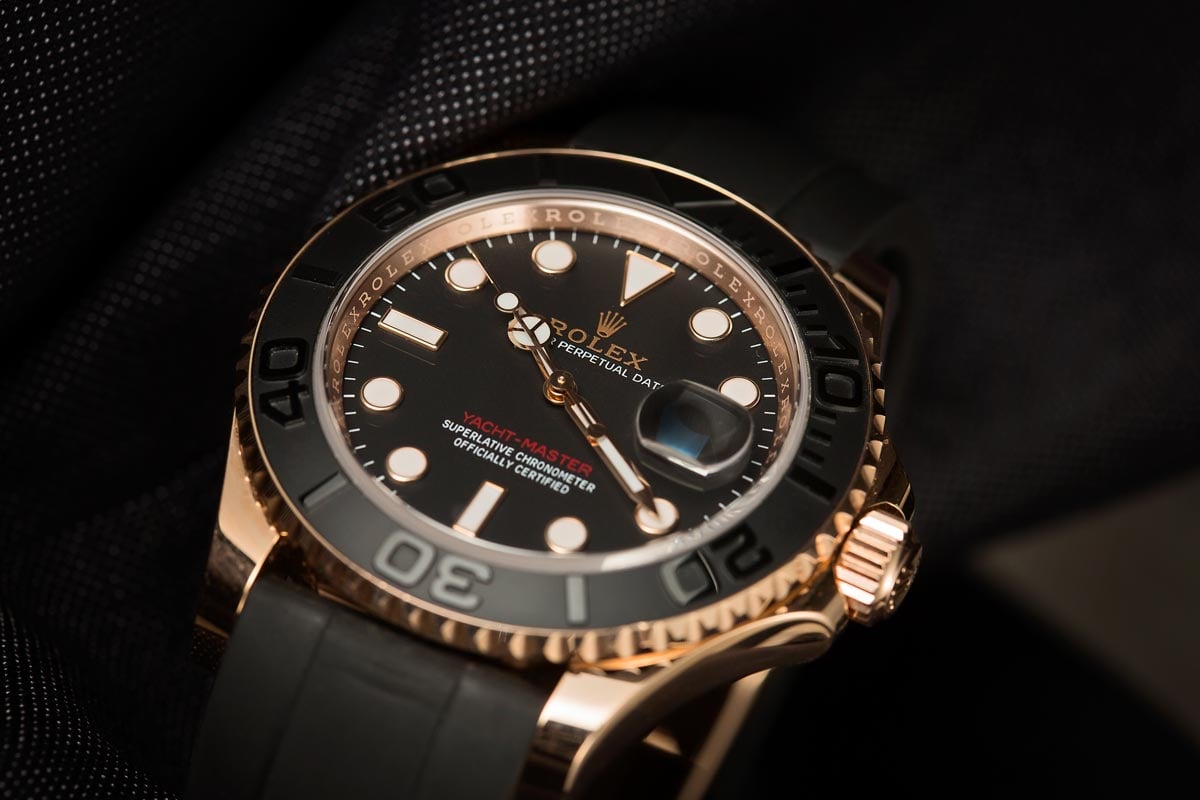 The Oysterflex is a combination of elastomer and steel.

When it was released in 1992, the Yacht-Master became the first in the Oyster Professional range to be offered in a 35mm mid-size, alongside the ladies and full-size men’s models.

Today, only a 40mm and 37mm version are available and, interestingly, they have two different movements. The smaller of the pair, marketed as both a men’s and women’s watch, is powered by the new generation Cal. 2236, containing the Syloxi hairspring that represents Rolex’s first venture into silicon components.

Inside the 40mm ref. 116655 is the battle-hardened and utterly reliable Cal. 3135. By far their most widely-used caliber, it has been proving its worth as Rolex’s main engine since 1988. Performing way beyond the standards set down by the COSC, it’s accurate to within +2/-2 seconds a day. 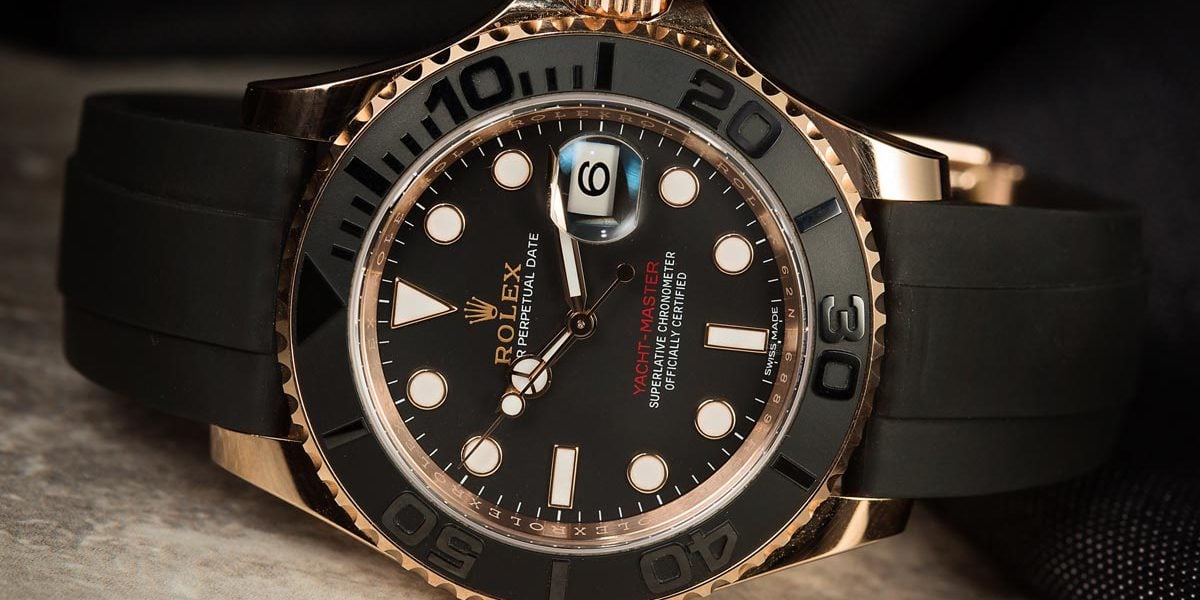 What are your thoughts on the Yacht-Master 40? Comment below.

A radical departure from the norm and the debut for a number of never-before-seen features, the Yacht-Master ref. 116655 has all the hallmarks of a classic in the making.

Its matte dial with the red text give it a healthy vintage feel too, and its hefty buy-in price will grant it an invaluable degree of exclusivity.

If I was a gambler, I certainly wouldn’t bet against it becoming a highly sought-after piece in years to come, but that isn’t the best reason to add one to the collection if the budget allows.

This is simply one of the most strikingly good-looking and capable watches ever produced by a brand that sets the standard other manufacturers try to live up to. A model welcomed anywhere, whether on deck or on the beach, the Everose gold Yacht-Master 40 is Rolex at their formidable best. 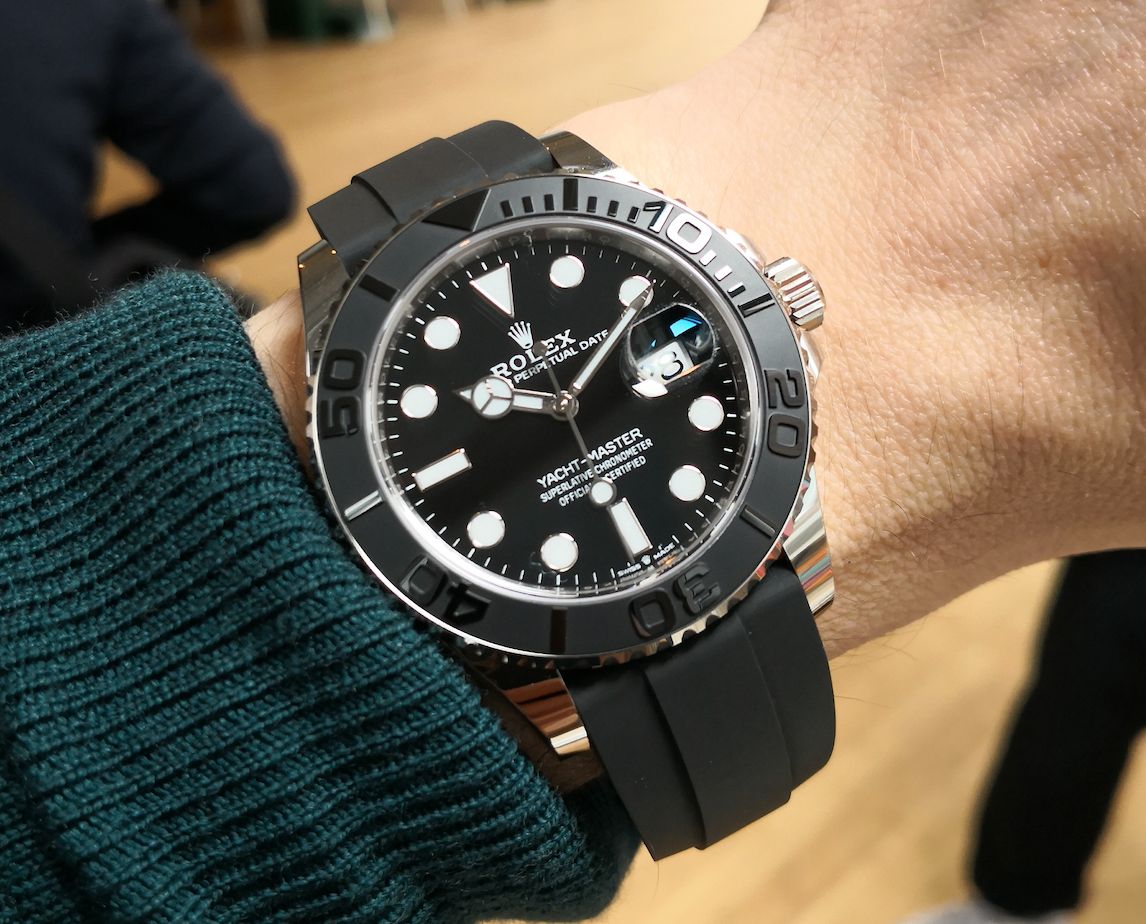 At Baselworld 2019, Rolex unveiled an all-new addition to their Yacht-Master collection: the reference 226659. Featuring a 42mm case in solid 18k white gold, the new ref. 226659 is the largest Yacht-Master ever produced (not including Yacht-Master II watches), and is currently the only standard Yacht-Master available with a case size larger than 40mm.