The luxury watch industry prides itself on tradition. Companies such as Rolex and Patek Philippe have watch lines that have existed for decades, with some that have endured for nearly a century. As a result, customers have come to expect certain things from these manufacturers, and their classic designs only change slightly over the years.

Generally speaking, this is a good thing. Iconic watches such as the Rolex Submariner, or the Calatrava from Patek Philippe are true classics. Their designs are timeless, and they look just as good now, as they did when they have first conceived decades ago. However, in an industry that prides its self on timeless designs and long-standing traditions, sometimes innovation loses out to history, and truly inspired creations never make it into production.

It is difficult to create a beautiful and truly unique watch design.

It is difficult to create a beautiful and truly unique watch design that still adheres to the history and essence of the brand behind it. However, Cartier seems to have done so with their Ballon Bleu line of watches.
Currently available in five different metal options, with sizes ranging from 28mm to 46mm, Cartier produces many different variations of the Ballon Bleu watch. With that in mind, the standard men’s model measures 42mm in diameter, and is powered by Cartier’s caliber 049 automatic movement.

Possibly the most striking feature of the watch is its crown. Fitted with a large blue cabochon and recessed into the case, the fluted crown almost appears to float within the watch. A smooth arch extends out of the case near the 3-o’clock position, surrounding the crown and making for a very fluid design. As a result of this unique aesthetic, the guilloche dial – protected by a domed, sapphire crystal – takes on a subtle C-shape, creating a highly original appearance, and visually distinguishing it from other watches. A modern unisex watch with a distinguished look. 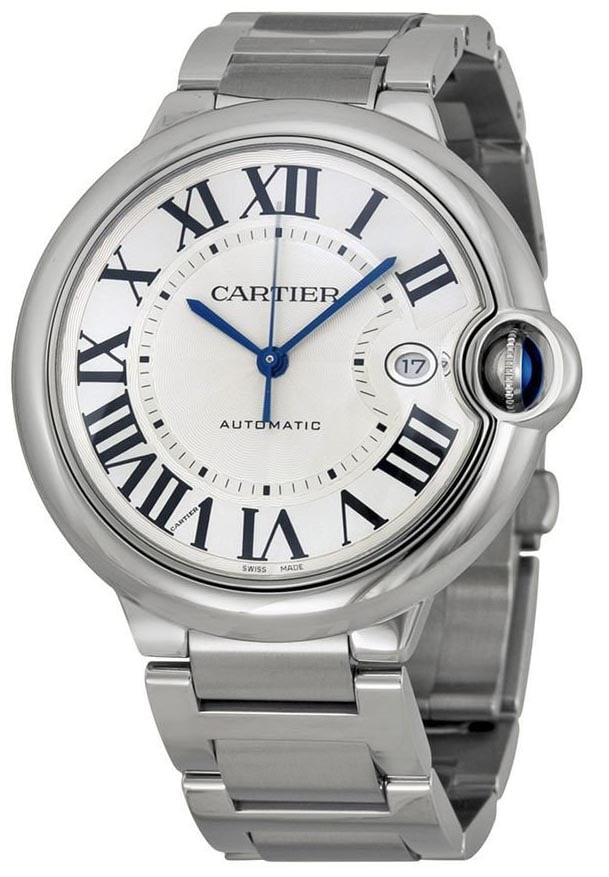 Although the Ballon Bleu is truly unique, it also seems strangely familiar – almost classically Cartier – in its design. The large Roman numerals on the dial and the sword-shaped hands make this watch very reminiscent of early Cartier timepieces; however its design is unlike anything they have ever previously produced.

It is possible then, that this Cartier is a classic in the making. Every watch that is now considered a classic – regardless of manufacturer, was once a new design. Adhering too tightly to tradition stifles progress and creativitallon Bleu will endure and become their next iconic watch. However, it has all the necessary boxes checked for a future classic, and it has already been a hit with watch lovers and collectors alike.