In the run-up to Baselworld 2019, German luxury watch manufacturer, NOMOS Glashütte teased the market by releasing a pair of new Tangente neomatik watches for Doctors Without Borders. 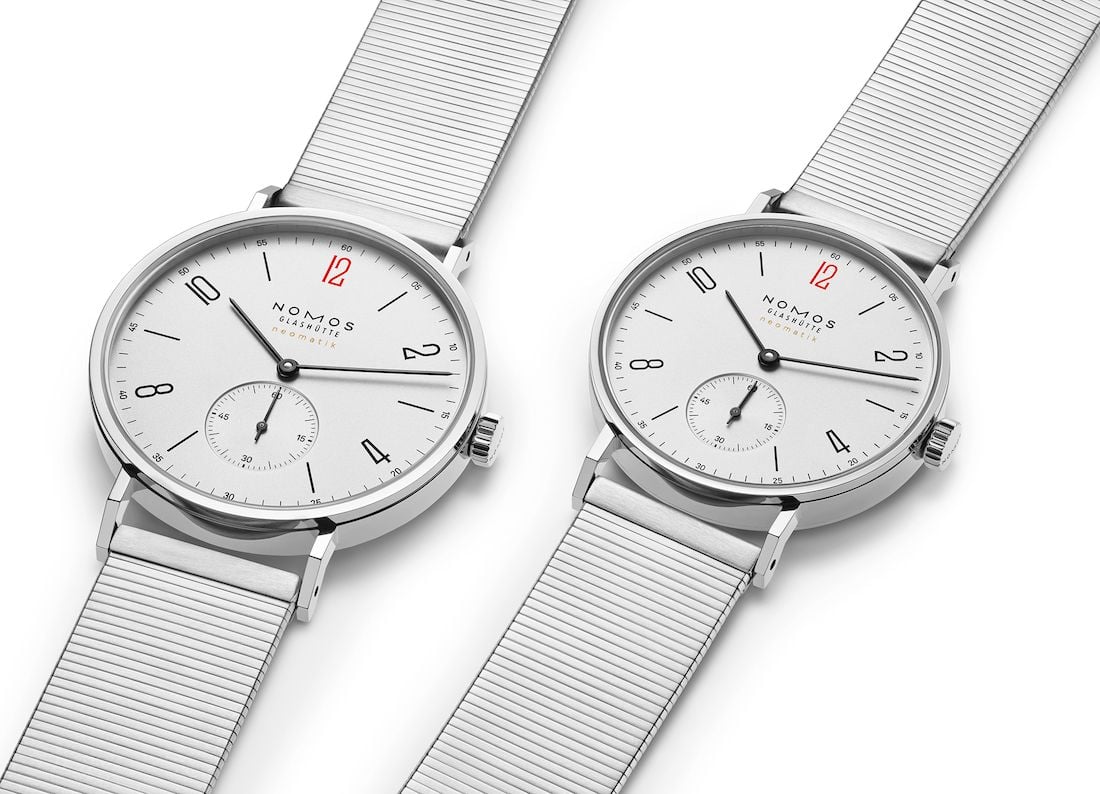 The partnership with Doctors Without Borders (Ärtze ohne Grenzen in the brand’s native tongue) is nothing new, but it is a welcome reinvigoration of a cooperative endeavor that gifted the watch industry with one of the most popular and sought after Tangente models ever. And make no mistake, there have been plenty to choose from (just check out the NOMOS Encyclopedia if you don’t believe me).

With two special editions for the German market, two for the UK, and two for the USA, the original run extended to 6,000 pieces. An additional pair was released to help those affected by the typhoon in the Philippines in 2013. That brought the total to 8,000 timepieces. Given the popularity of these models, it was a wise move not to call time on this collaboration, despite the fact that it had been scheduled to end this year. 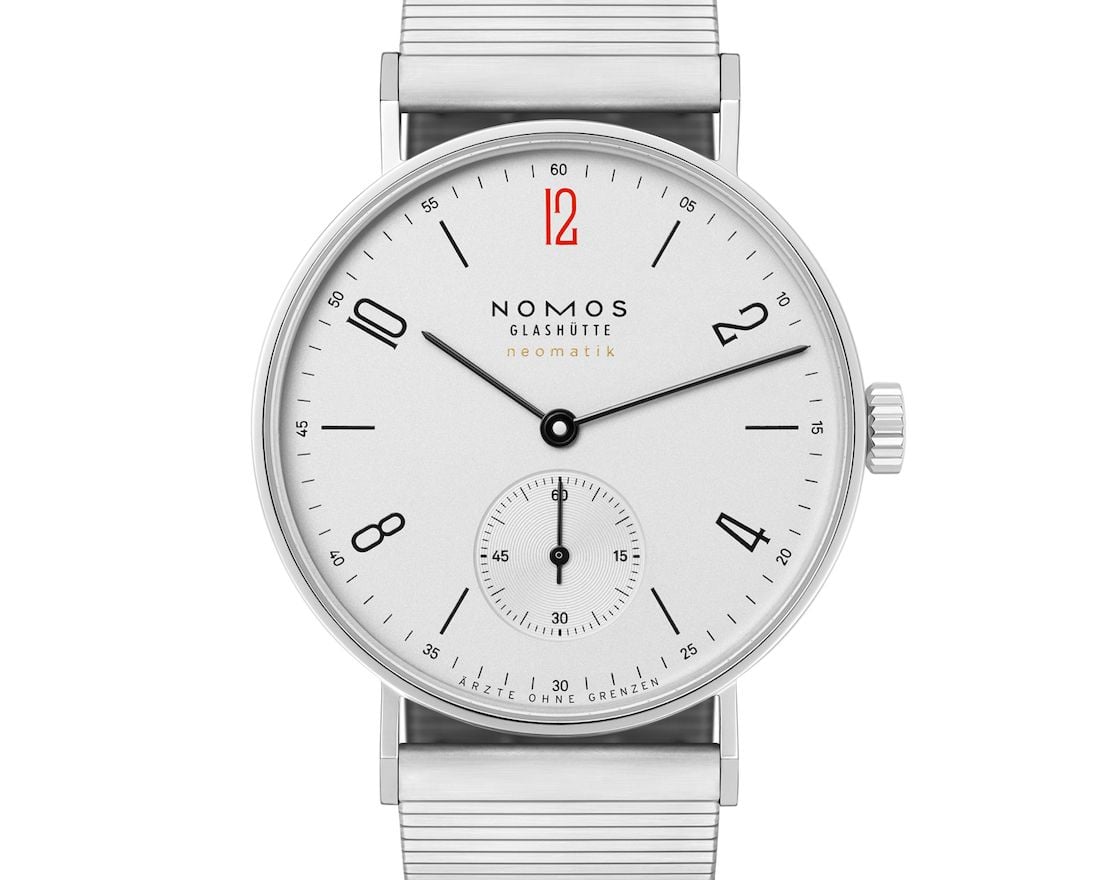 Instantly recognizable, the red twelve, black oxidized hands, and the Ärtze ohne Grenzen text at six o’clock distinguish this special edition from the core models. The changes are not huge, but they are effective. This subtle flash of color was all that was needed to drive the ‘Nomies’ (an unofficial nickname for fans of the brand) wild with excitement.

Pleasingly, little has changed about the set-up of the relationship, although given the higher MSRP of the new models, the donation – which had been €100 per piece – has also risen to €250. Perhaps the most exciting thing for many is the fact that these watches will be available all around the world. Without territorial restrictions, anyone who wants one will be able to buy one without boarding a plane.

But that means you’ll need to act fast. This time around, NOMOS Glashütte is only releasing 250 of each reference! By dropping the total offering from 8,000 units to just 500, the brand has created a huge spike in exclusivity. And if past demand is any indicator of how quickly these 500 examples will sell out, those who want to purchase one had better do so sooner than later. 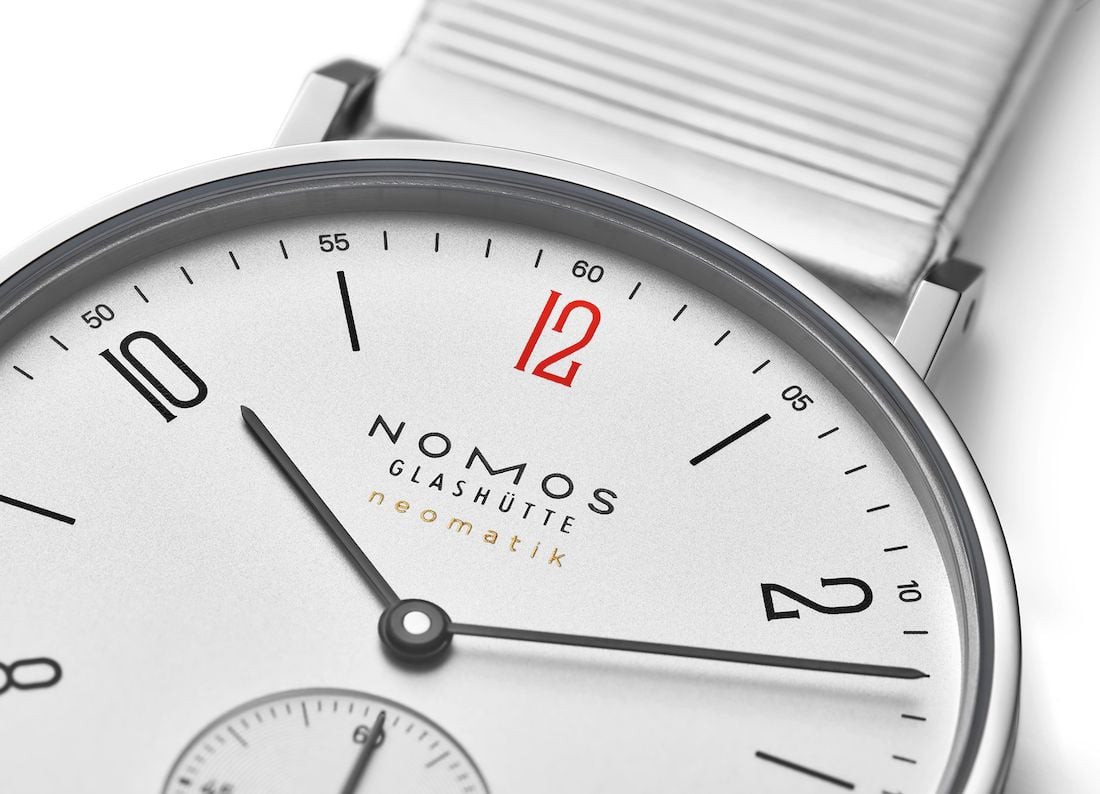 The Case and Dial

NOMOS Glashütte has kept things simple by just releasing two sizes – a classic 35mm case, and the more contemporary 39mm case (which actually measures 38.5mm but wears a lot larger). The dials of these new Tangente neomatik watches are immediately reminiscent of the original Doctors Without Borders collaboration, with the only additions being the tiny numerals every five minutes and the neomatik text beneath the word marque. The text at six o’clock is in German for these pieces, which I think is a nice touch.

A couple of years ago, NOMOS made the divisive decision to anglicize their nomenclature. The intention was to globalize the brand and make the catalogs easier to understand, but there was a predictable backlash from long-time brand followers. I’m glad to see the brand has reversed this decision for these models at least. 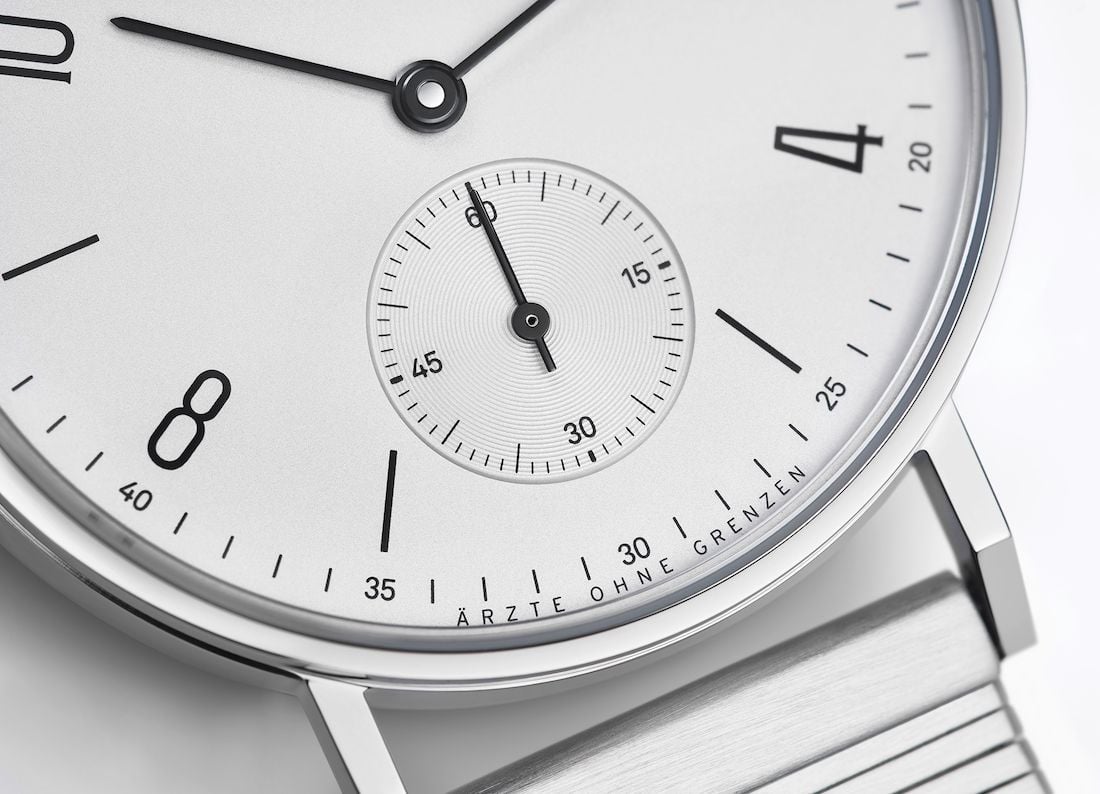 Powered by the multi-award winning DUW3001, both NOMOS Glashütte Tangente neomatik Doctors Without Borders watches are super slim as a result. The movement itself measures just 3.2mm thick. Despite such a slim mainspring, it is able to eke out a power reserve of 42 hours, thanks to a reduced operating speed of 21,600vph.

One of the things that has always impressed me most about the DUW3001 is the fact that it is wound by a centrally-mounted rotor weight. Central rotors are often eschewed in favor of the eccentric weight to save height. I prefer them visually and also like the fact they are technically more efficient at actually winding the watch. One quirk of the DUW3001 that purchasers should be aware of is that it does have a rather loud bearing system. This is down to a couple of factors. 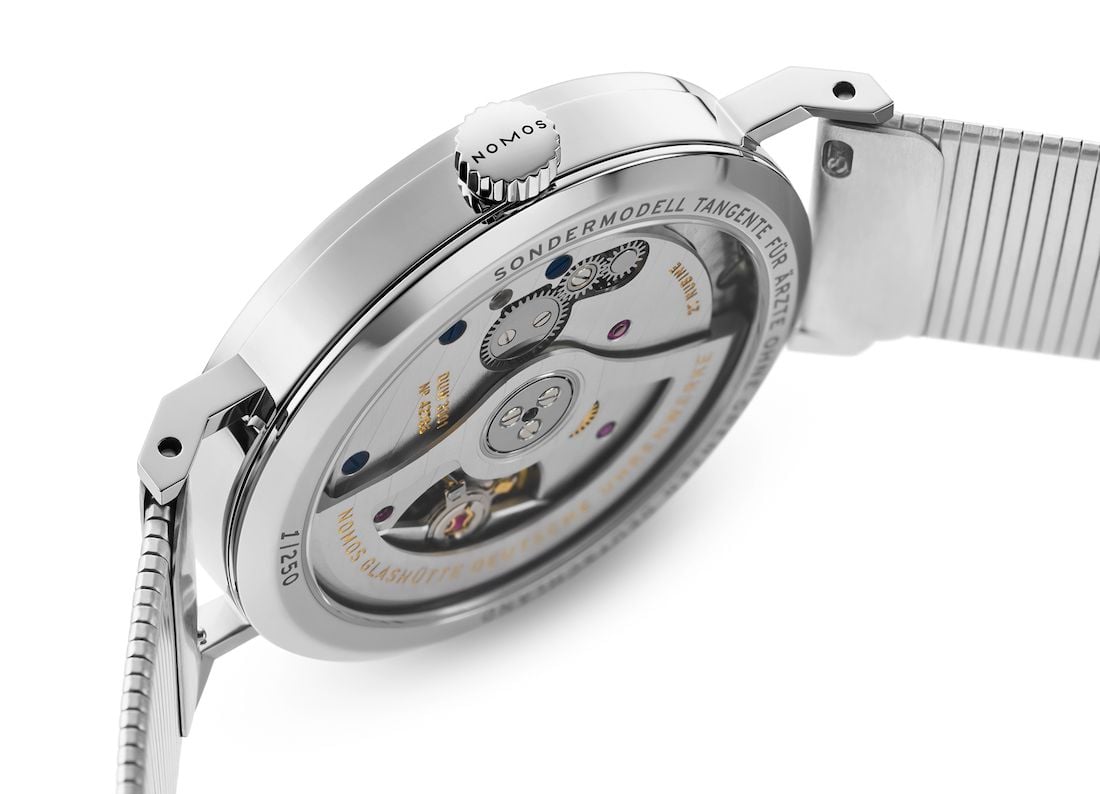 Firstly, the case walls are very thin (hence the 30m water resistance). It is therefore natural that they are less soundproof than larger housings. Secondly, the DUW3001 and DUW6101 feature a braking system that limits the movement of the winding weight once the mainspring is fully wound. The purpose of this is to extend the lifespan of the movement. This is beneficial to the company, which despite its international ambitions, is only around 300 people strong (and less than 20 of those employees are after sales watchmakers). The benefit for the consumer is simple: the watch should sustain less wear-and-tear and, over the duration of the consumer’s ownership, should require servicing less often. 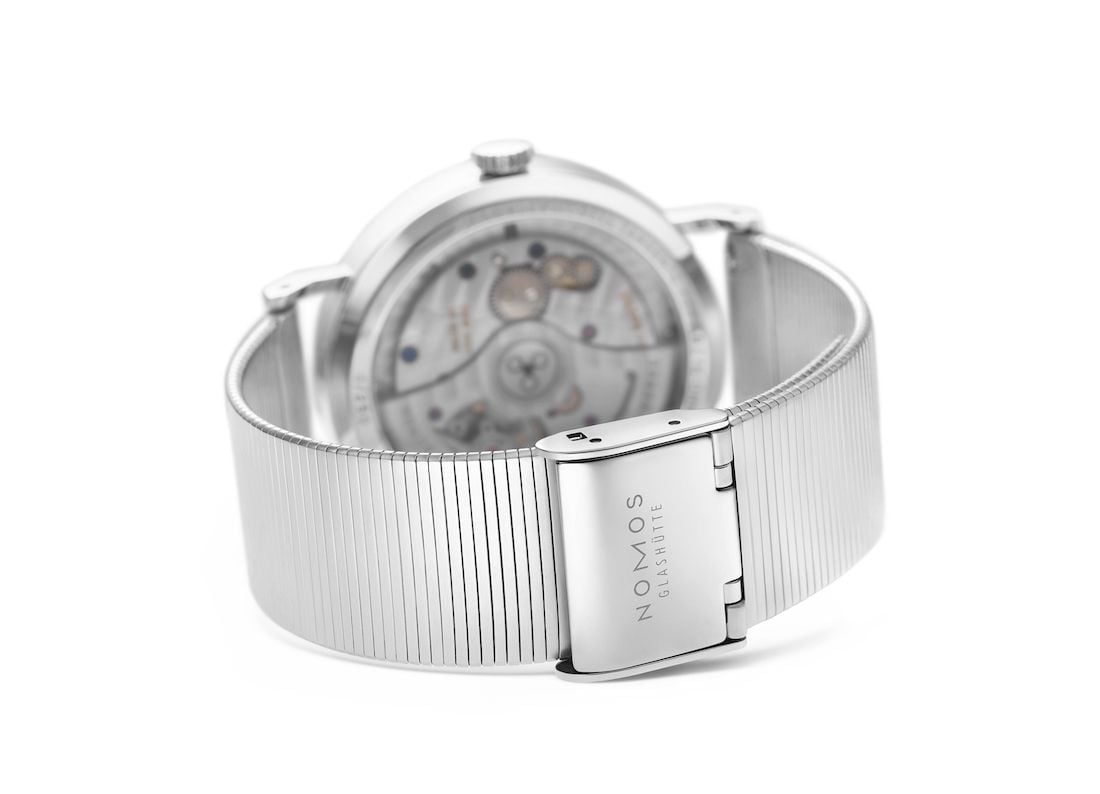 All in all, this is a very strong release by NOMOS Glashütte. It’s great to see the new bracelet on the Tangente – a model whose angular lines are far better suited to this straight-linked bracelet than the more curvaceous Club Campus on which it debuted earlier this year.

The Tangente neomatik is one of the most desirable NOMOS watches ever created based on the Doctors Without Borders’ track record. Crucial too, is the fact that this special edition is based on NOMOS’s most iconic piece. The brand does not have a logo nor does it have an ambassador; the Tangente has always been both. The neat alterations from the core piece make these models special without being extravagant. 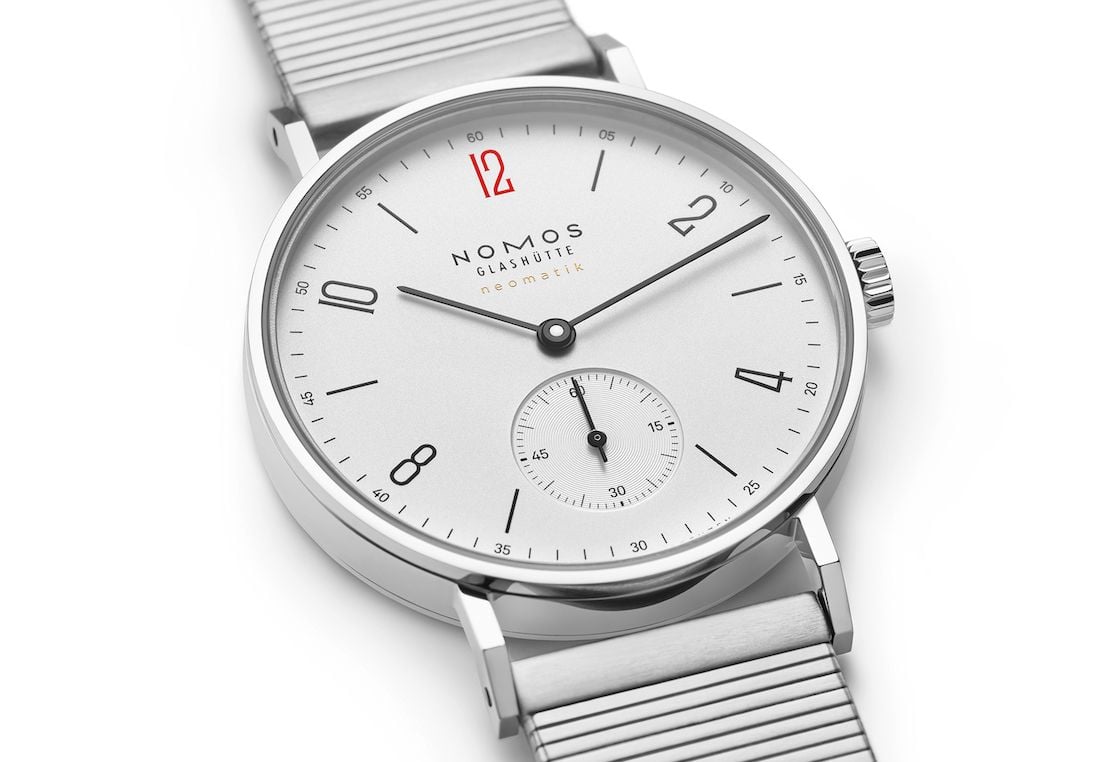 The 39mm (38.5mm) case is perfect for modern tastes, while the 35mm version of the provides a classic size for traditionalists and those with smaller wrists. The bracelet has been at the top of the Nomies’ wish list for years, and it is finally here. I don’t think it’s perfect, but it significantly broadens the brand’s appeal.

Thankfully, this release presents all that is good about the brand in a neat and tidy package. Limited to 250 pieces per reference, the NOMOS Glashütte Tangente neomatik Doctors without Borders watches will retail for $3,780 for the 39mm version, and $3,460 for the model with the 35mm case. 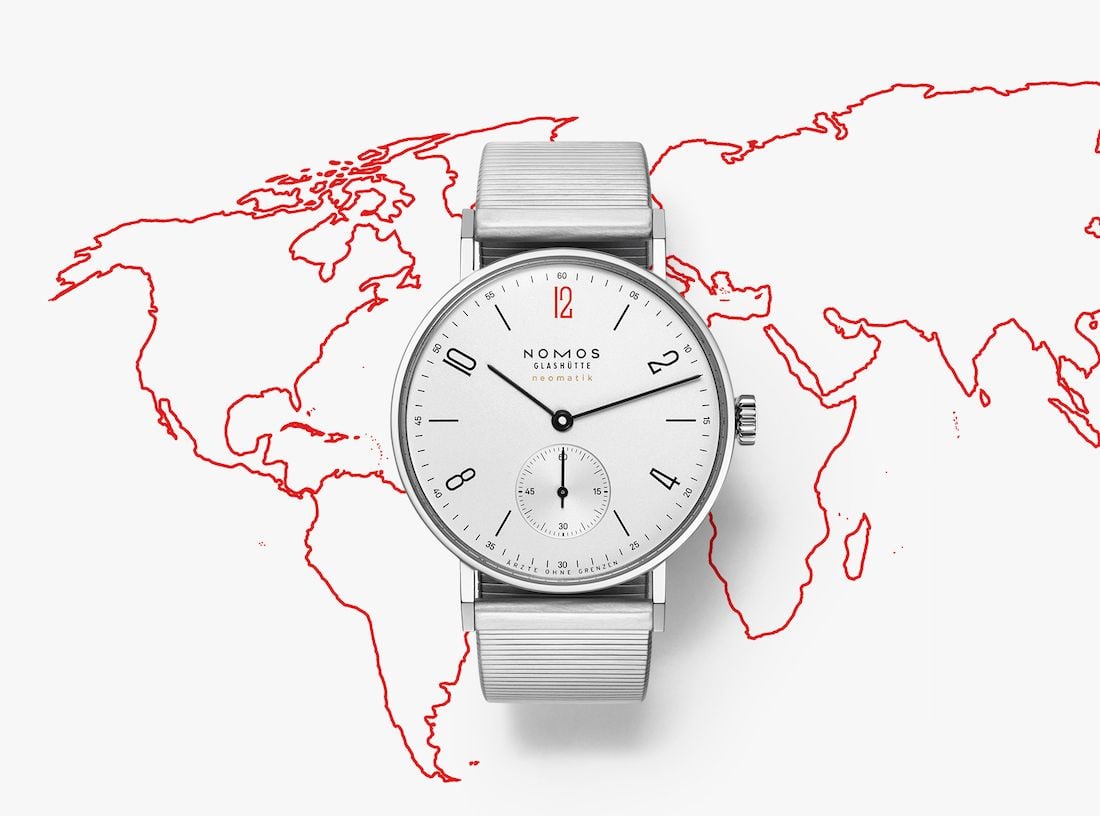 All images courtesy of NOMOS Glashütte