First introduced in 1992, the Rolex Yacht-Master is one of the newer addition to the brand’s catalog and was developed to be a somewhat flashier and more luxurious cousin to the iconic Submariner dive watch. While the Submariner is better suited for adventures below the surface of the ocean, the Yacht-Master excels when worn on the decks of a boat or even on land. Over the past several decades, the Rolex Yacht-Master has maintained its notoriously luxurious aesthetic, which we will examine further with this review of the two-tone Everose Rolesor Rolex 116621.

The Rolex Yacht-Master 116621 was introduced at Baselworld 2016 – the same year that Rolex unveiled the Oystersteel and ceramic Daytona. At the time of its release, the reference 116621 was the first Everose Rolesor edition of the Yacht-Master, which pairs Oystersteel with the brand’s proprietary 18kt rose gold alloy. Its release was overshadowed by the buzz surrounding the new Daytona, and now that the dust has settled, the ref. 116621 garnering a bit more attention among collectors in-the-know. 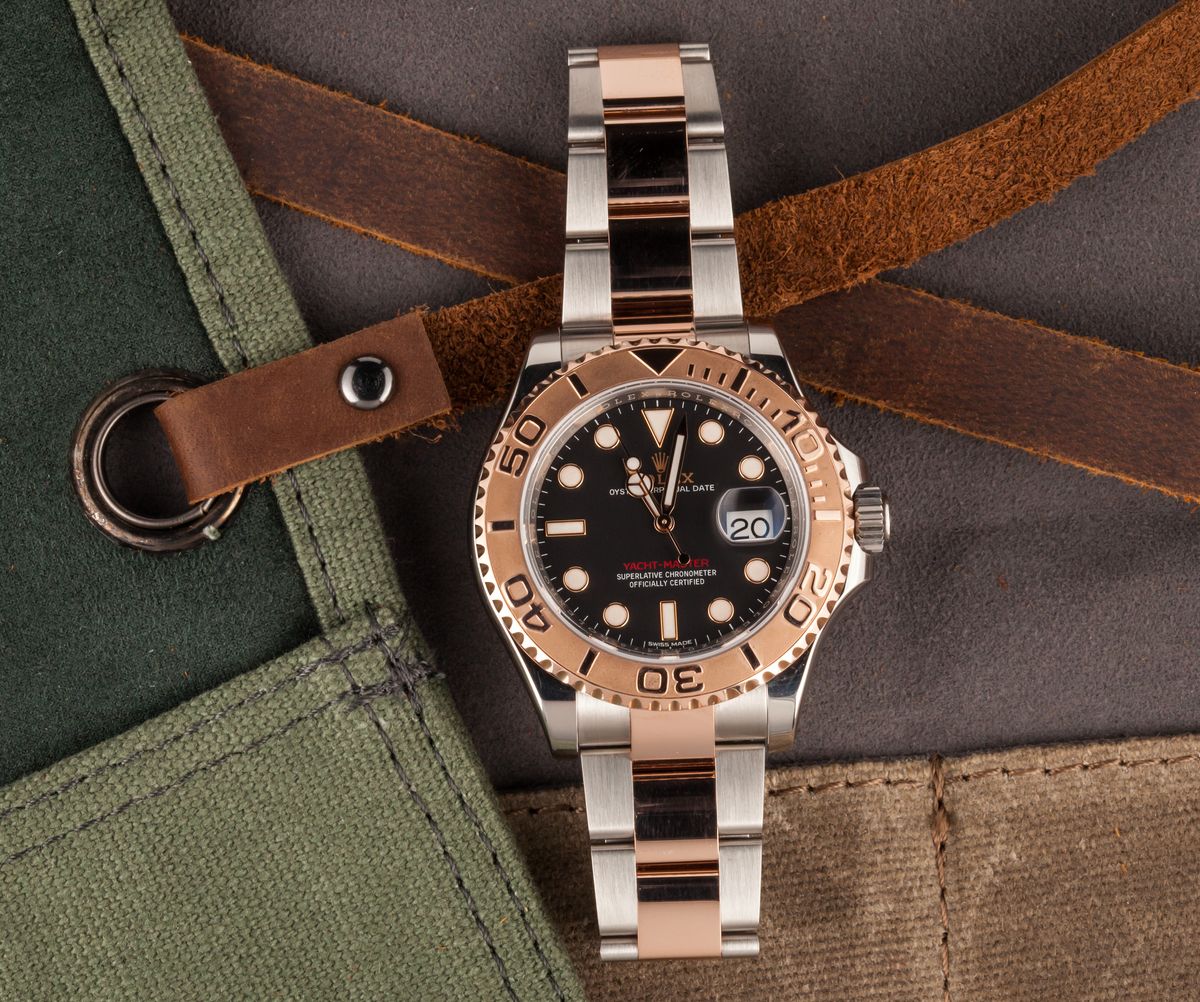 Powering the Yacht-Master 116621 is Rolex’s in-house Caliber 3135 movement. Rolex has used the Cal 3135 in many of its date-displaying watches for decades now due to its precision, reliability, and ease of use. In addition to being self-winding and beating at a standard frequency of 28,800bph, the Cal. 3135 also features an automatically changing date mechanism and a 48-hour power reserve. Newer editions of the movement are also equipped with Rolex’s patented paramagnetic blue Parachrom hairspring, which allows the Yacht-Master 116621 to be accurate to within -2/+2 seconds per day.

In addition to being COSC-certified, which means that the movement meets the strict standards set by the Official Swiss Chronometer Testing Institute, the Cal. 3135 in the Yacht-Master ref. 116621 also features Rolex’s Superlative Chronometer certification, which adheres to even more stringent timekeeping and performance standards than what is required for traditional chronometer-rated movements. 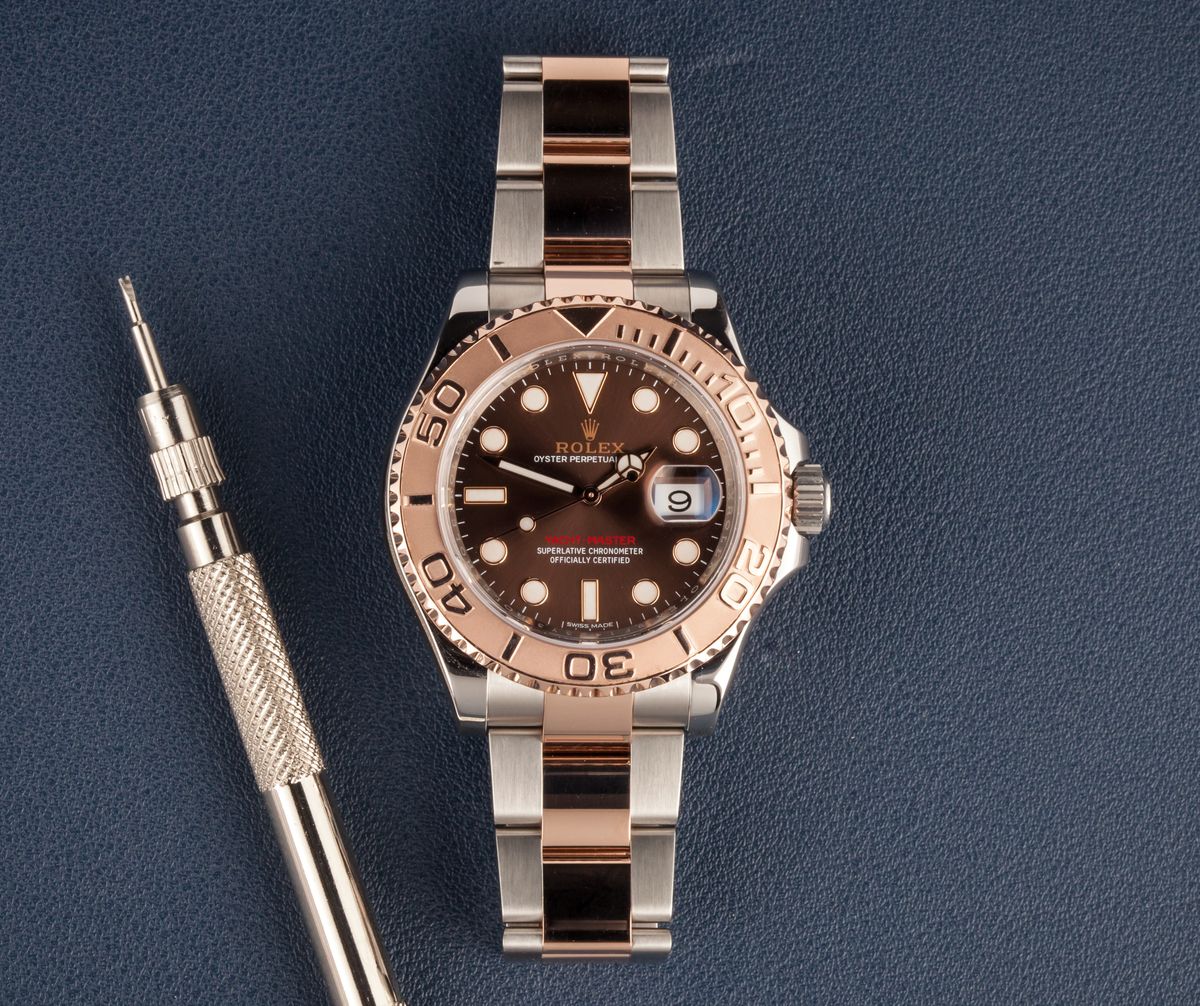 The Case and Bracelet

Regarding size, the Rolex Yacht-Master 116621 remains the same as its predecessors with a 40mm Oyster case. The case is equipped with the collection’s signature sand-blasted rotating 60-minute timing bezel (which is crafted from solid 18k Everose gold on the ref. 116621) and Rolex’s Triplock crown, which is screwed into the Monobloc middle case and promises water-resistance up to 100 meters. The Rolex Yacht-Master also notably features lugs that are more curved and tapered than other sports models currently in production, which makes for a more dressy and refined appearance on the wrist.

The original ref. 116621 paired the warm hue of the Everose Rolesor finish with a stunning chocolate sunburst dial, which included matching rose gold accents on the hour markers, hands, and Rolex logo. The option of a black dial was added later; however, both brown and black dial versions remain incredibly popular among collectors on the pre-owned market. 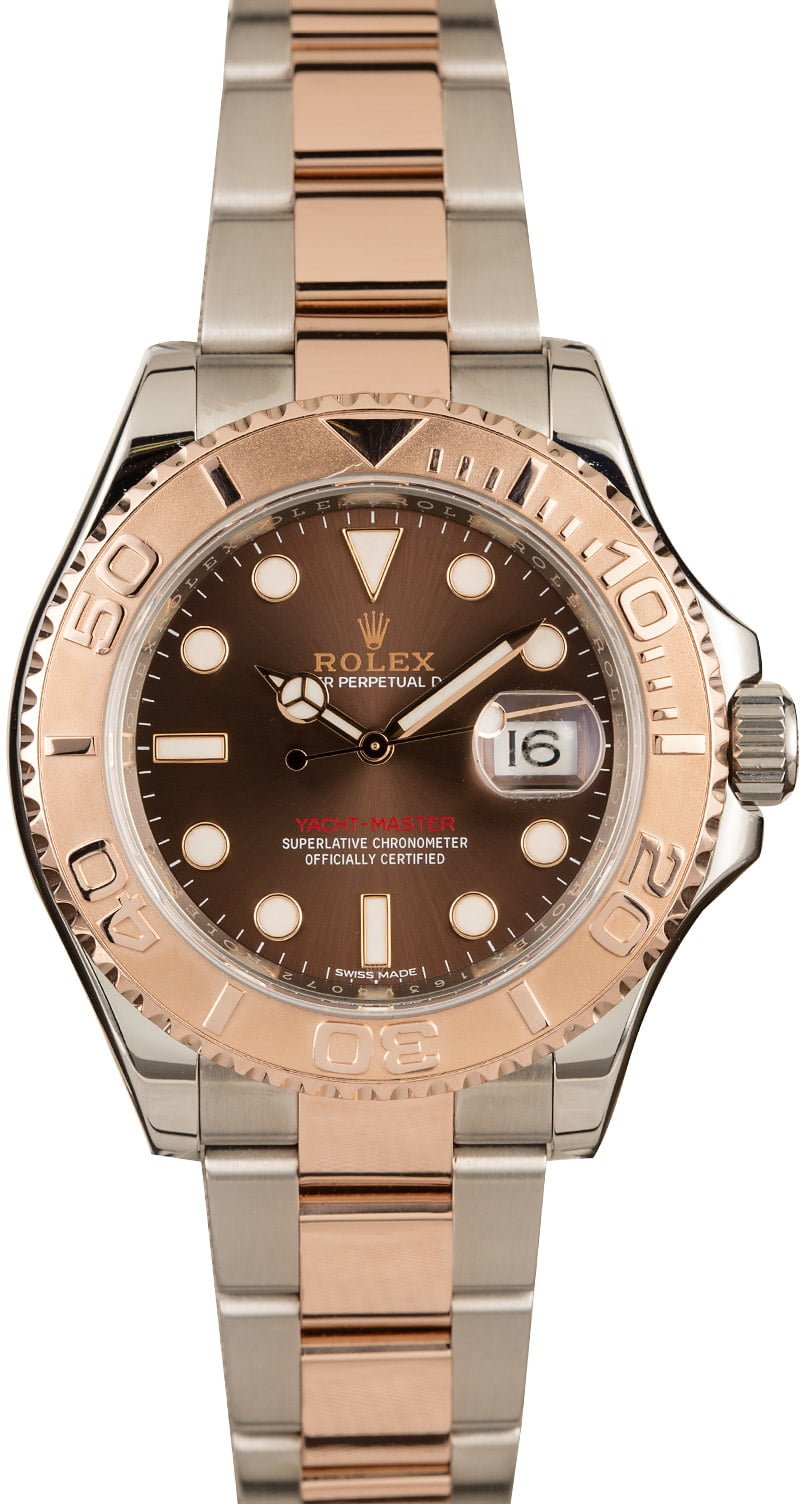 As a reference to Rolex’s original professional tool watches, the ‘Yacht-Master’ name on the ref. 116621 is presented in a sporty red hue. The mesmerizing sunburst finish of the brown dial mirrors the luster of the bezel, creating a cohesive design that is more than deserving of the prestigious Yacht-Master name. It’s also worth noting that the Yacht-Master was the first Rolex sports watches to feature the brand’s modern Maxi dial, which would later make appearances on the beloved Kermit Submariner 16610LV and then the rest of the 6-digit series Rolex watches.

Rolex currently produces the Yacht-Master 40 on both a three-link Oyster and a rubber Oysterflex bracelet. However, the ref. 116621 was only ever offered with an Oyster bracelet, while the Oysterflex bracelet remains reserved for the full gold references. Solid end-links, a sturdy machined clasp, and solid center links in Everose gold give the bracelet substantial weight on the wrist while mirroring the elevated two-tone style of the case, making this edition of the Yacht-Master an intriguing watch to wear. The clasp also includes Rolex’s convenient Easylink extension that allows users to increase or decrease the length of the bracelet by 5mm without the use of tools, allowing for a perfect fit as an individual’s wrist fluctuates throughout the day. 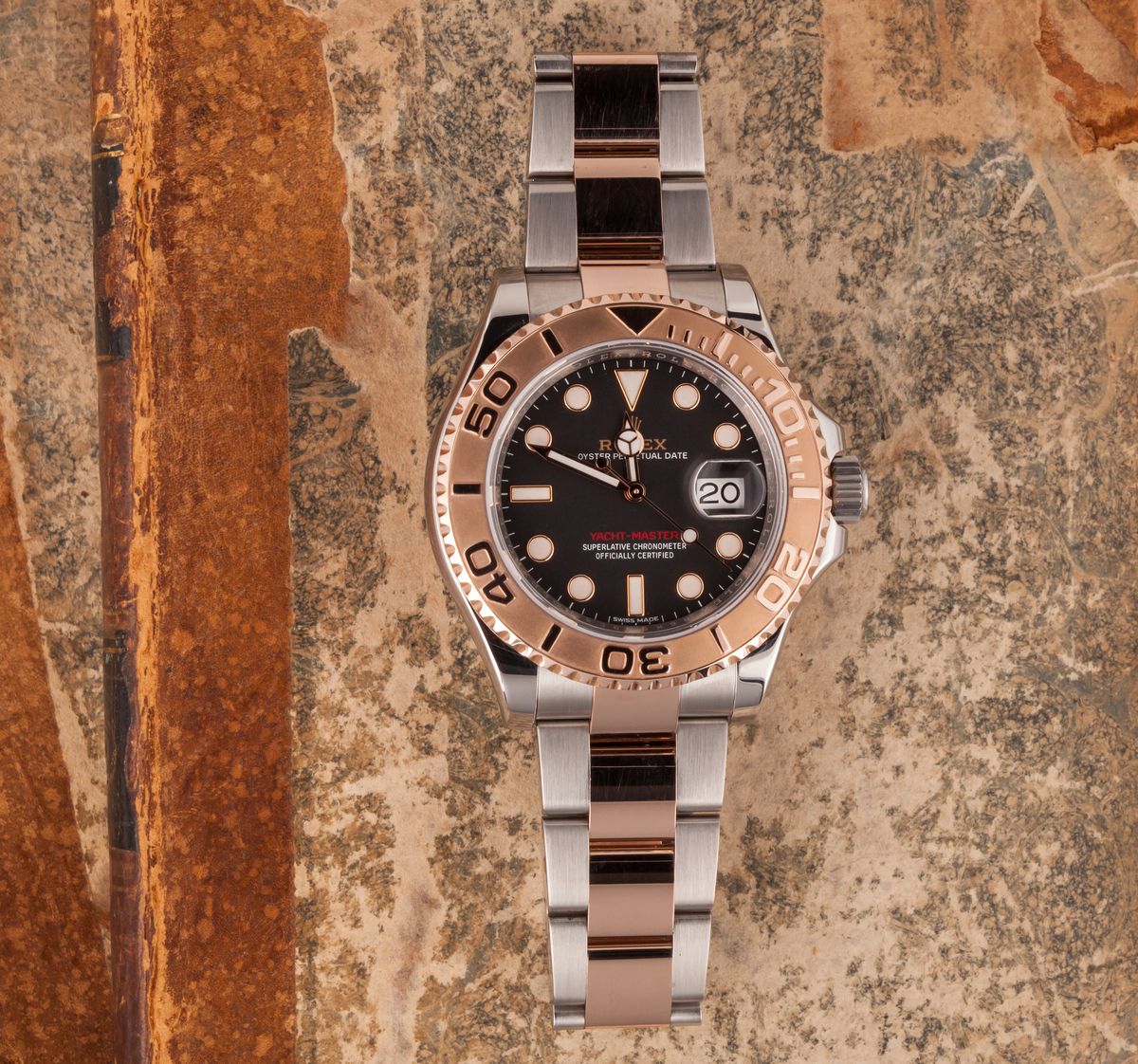 The Yacht-Master Origin Story and its Resemblance to the Submariner

Some consider the Rolex Yacht-Master to be a fancier edition of the iconic Submariner dive watch. It features a similar overall design with a 60-minute rotating timing bezel, a 40mm case diameter, and a sporty luminous display on the dial, complete with the same Mercedes hands. However, what sets the Yacht-Master apart from the Submariner, and what makes it a bit more luxurious, is the addition of a sand-blasted bezel crafted entirely from either solid gold or platinum along with more refined and curved lugs.

While the Yacht-Master and the Submariner are similar in appearance and both feature Rolex’s Triplock winding crown, the two watches offer significantly different water resistance ratings. As it was not designed for scuba diving, the Rolex Yacht-Master doesn’t offer the same water-resistance as the Submariner, with an official depth rating of 100 meters, compared to the 300 meters offered by the Submariner. 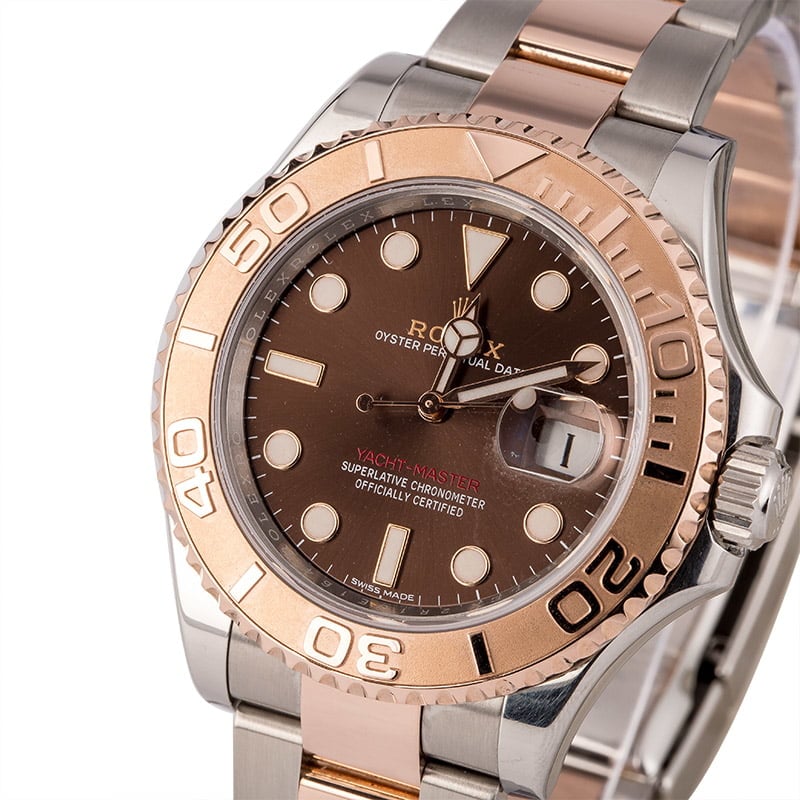 It’s rumored that the design for the Rolex Yacht-Master was initially developed as the evolution of the Submariner, embracing a more luxurious and refined overall aesthetic. According to the rumors, the actual design of the Yacht-Master was created many years before its release, but Rolex supposedly decided that it was too much of an aesthetic departure and shelved the design for years before releasing it under its own model name in 1992. 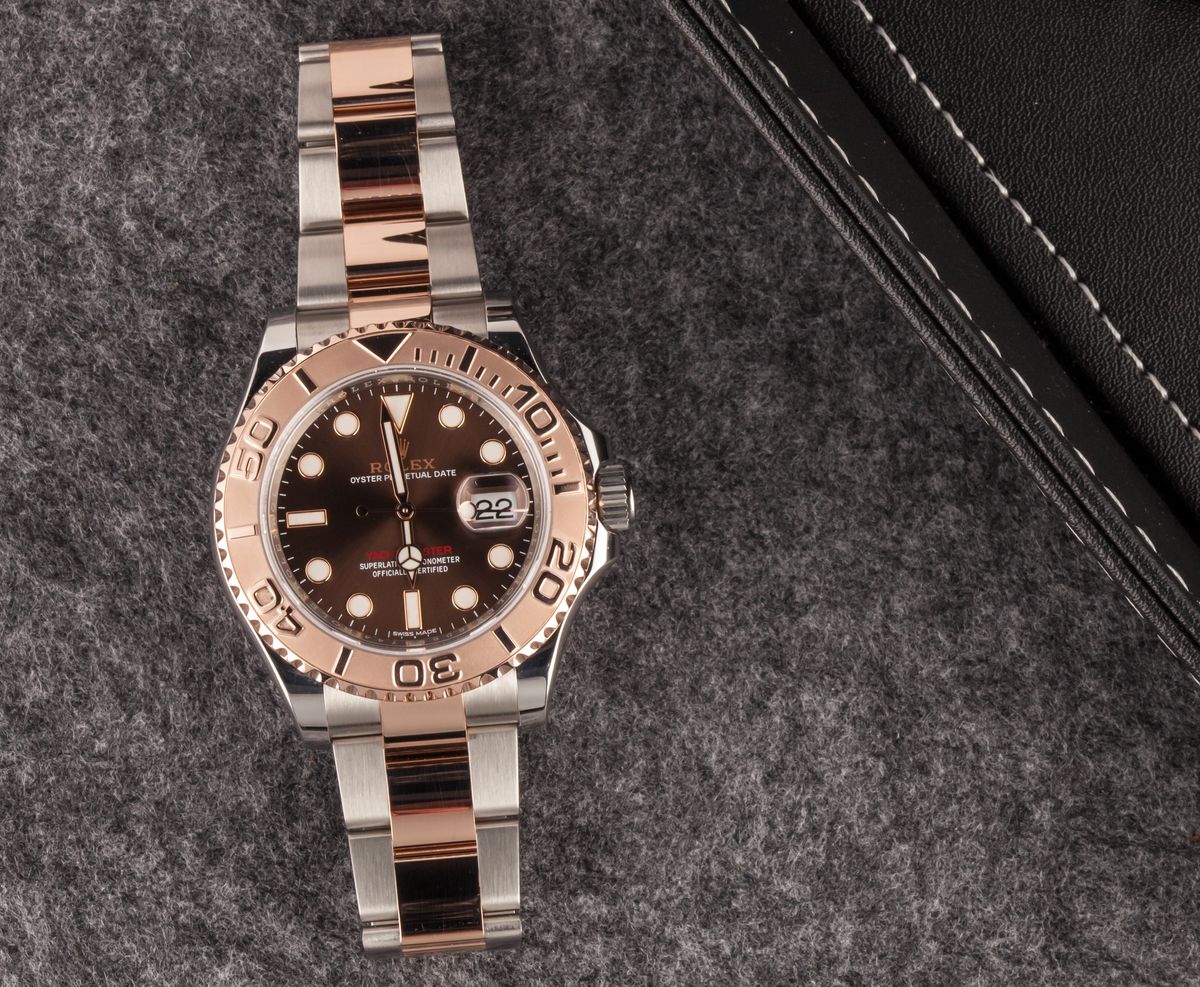 The Rolex Yacht-Master ref. 116621 is no longer in production. The model was discontinued last year at Baselworld 2019 in favor of the current Everose Rolesor ref. 126621, which boasts a brand new Caliber 3235 movement. If you’re interested in adding the ref. 116621 to your watch box, your best bet is to shop the used Rolex market, where examples in good condition are still relatively attainable.

Thanks to the use of precious metal and its association with the Rolex brand itself, the Yacht-Master 116621 stands to hold its value quite well. Additionally, its Everose Rolesor construction helps set it apart from the various other two-tone Rolex watches that have been produced over the years, which primarily feature stainless steel paired with a more traditional yellow gold. 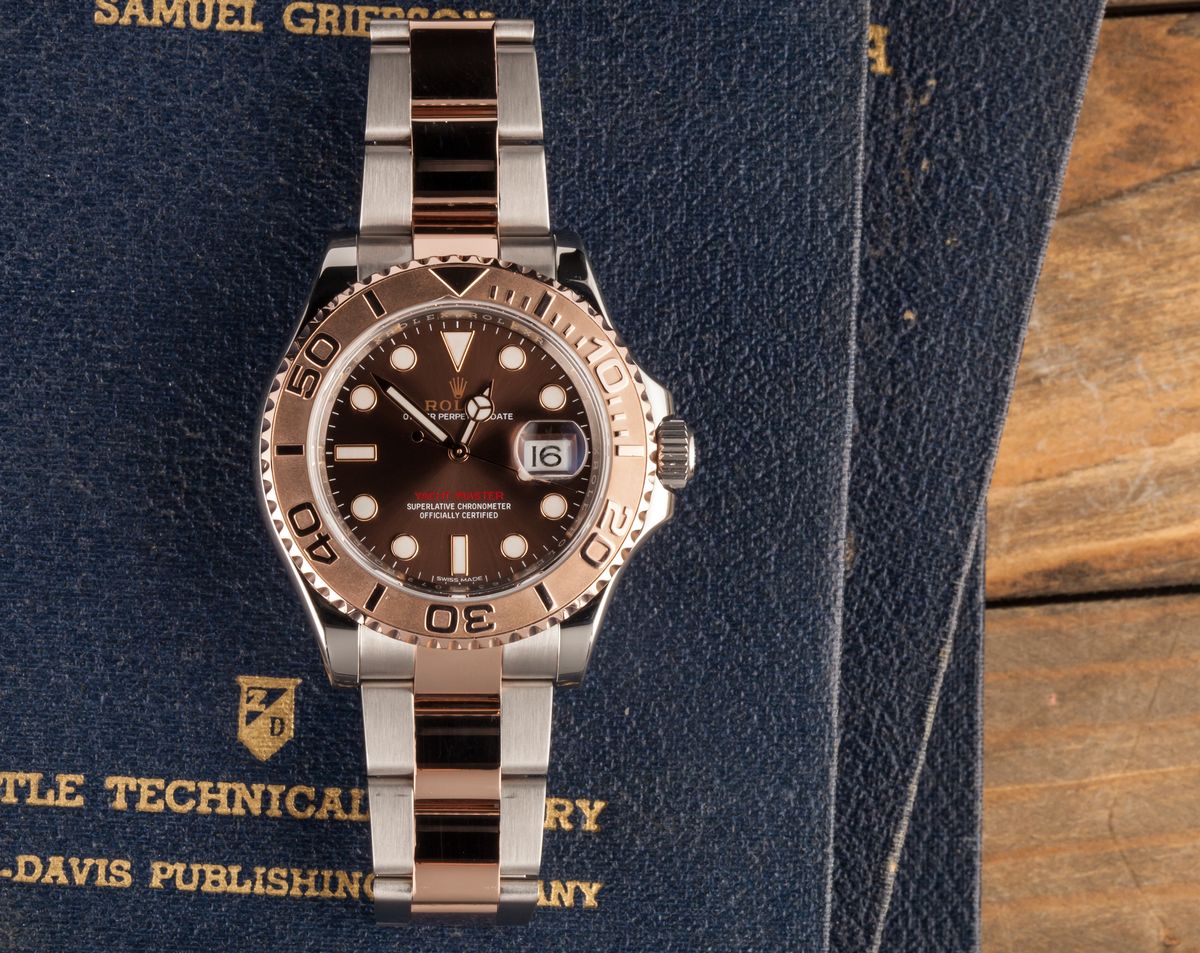