It’s impossible to judge just how much of its abiding fame the Rolex Oyster Perpetual Submariner owes to James Bond.

There’s no doubt it would still be the world’s favorite dive watch even without the superspy’s patronage, but would it have reached that status as quickly as it did had it not appeared on Connery’s wrist so prominently throughout all six of his official outings?

We’ll never know, but I’d imagine there’s a very large Christmas card from the brand above the Eon Production Studios fireplace every year, right next to the one from Aston Martin. 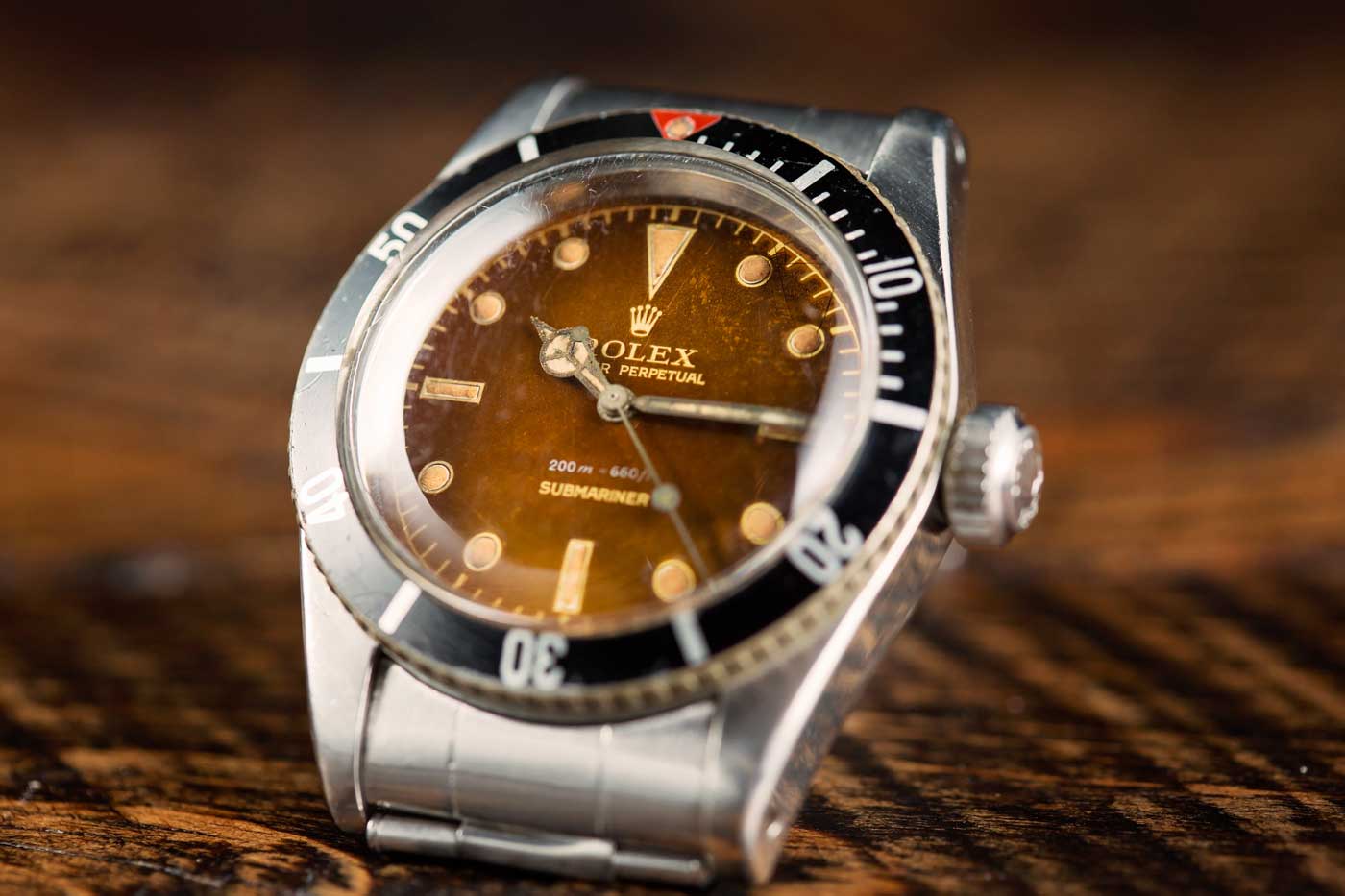 The Submariner 6538 is a rare watch with very limited quantities.

Both Connery and Roger Moore sported a number of different Sub references during their respective tenures, but it’s the first model 007 wore as he set about ruining Dr. No’s plans for world domination that will be forever known as the Bond Submariner, a vintage Rolex Submariner that is incredibly hard to find.

By the time the ref. 6538 emerged in 1955, the watch was already into its sixth iteration in just two years, with several of its predecessors appearing and disappearing in the relative blink of an eye and in minute quantities. However, each new model built on the work of the last, and by the time the 6538 debuted, most of the elements we have come to expect from the Submariner name were in place, with one or two notable exceptions. 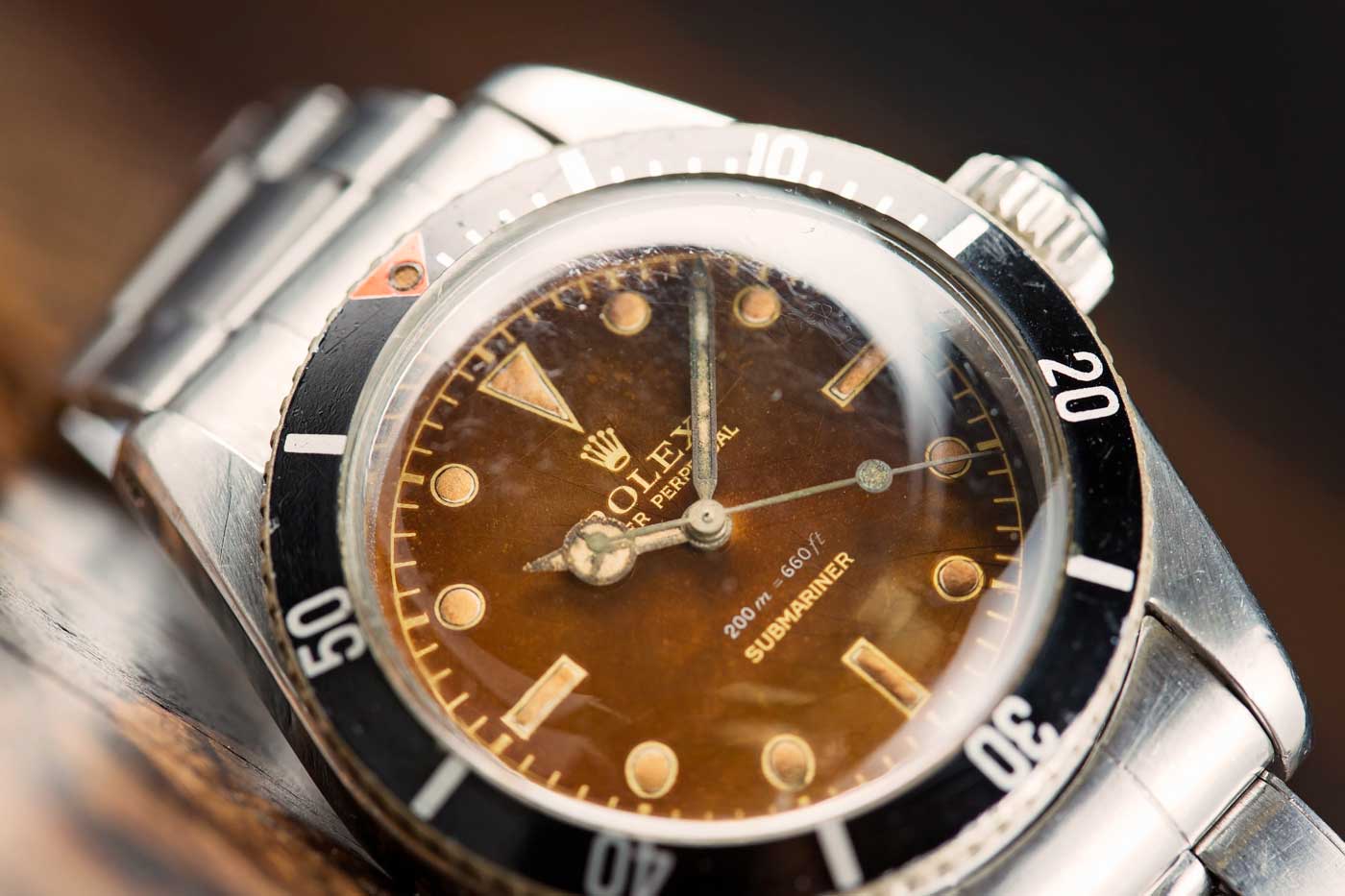 The Submariner 6538 garnered a lot of attention for being seen in the media.

The black, rotating bezel had been a permanent presence since the watch’s inception, borrowing the concept from Rolex’s own Turn-O-Graph ref. 6202. Graduated to 60 minutes, with the first 15 marked individually to more accurately measure a diver’s underwater decompression times, it is perhaps the Sub’s most identifiable feature from across a crowded room.

The dial too, had evolved to its now customary form, with its lume-filled mixture of dot and baton indexes, and the inverted triangle at 12 o’clock. The Mercedes hour hand and sweeping, lollipop-style seconds hand have also remained unchanged for the last 60 years.

Where the ref. 6538 starts to show its age, in a charmingly charismatic way of course, is in its crown. Notoriously the weakest aspect of any watch design, the Submariner range was still four years away from adopting protective crown guards, when the ref. 5512 became the first in the series to do so. 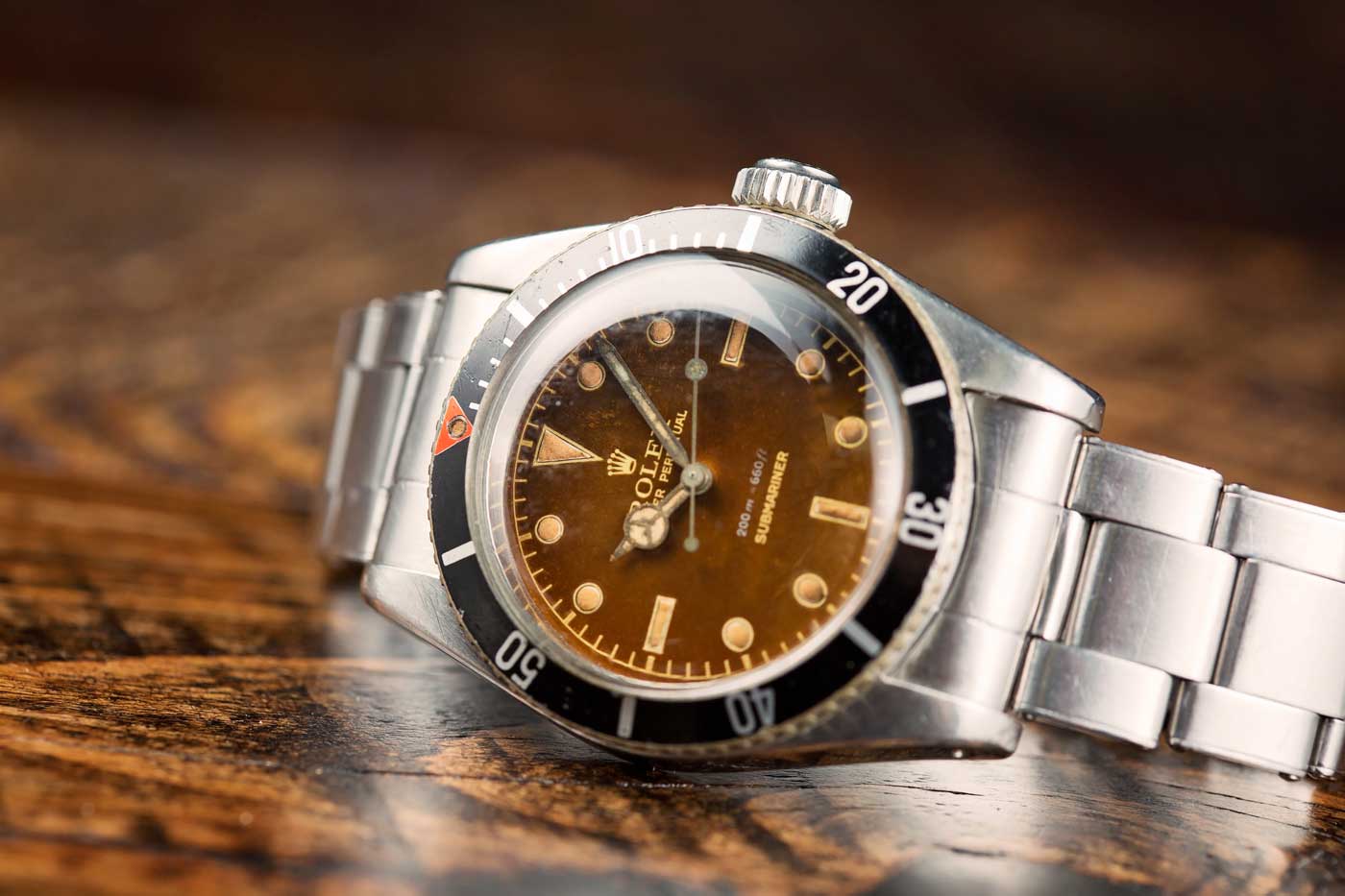 In addition to the watch’s fame, this reference is highly valued.

While obsessively-controlled uniformity is at the heart of the modern Rolex infrastructure, things were very different for the brand in the 1950s. Although it had a meager four year production run, the ref. 6538 was issued with a huge number of different dial variations, with tiny changes to the color or amount of text being made seemingly at random.

Among the most immediately noticeable differences between certain types of the watch is whether they have what is known as 2-line or 4-line dials.

The ref. 6538 was powered by the Cal. 1030 throughout its life, Rolex’s first bi-directionally winding automatic movement. Partway through the 6538’s run, the Cal. 1030 also became the first of the brand’s calibers to gain official chronometer status, winning certification after enduring the rigorous testing from the COSC. 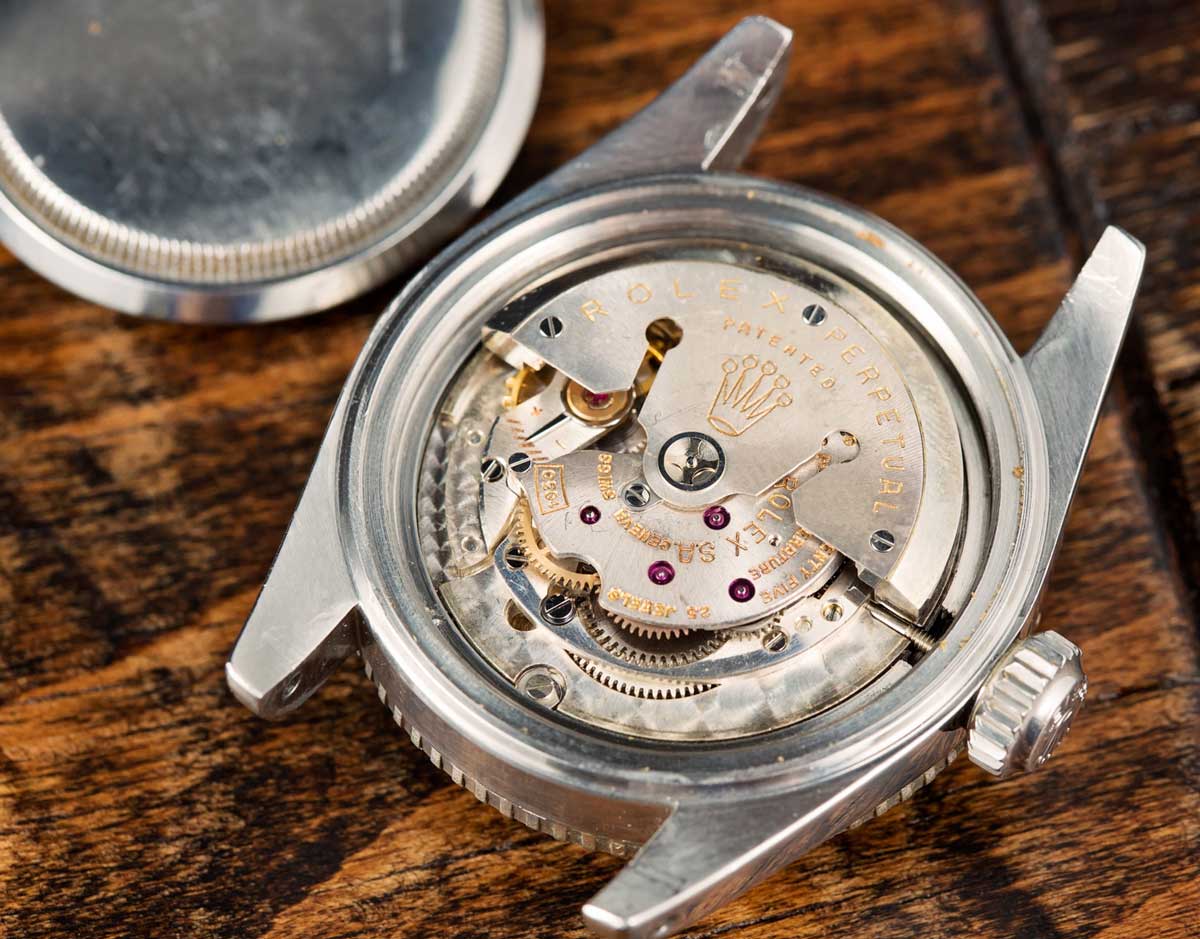 From that point on, the Sub could wear the ‘Officially Certified Chronometer’ tag on its dial beneath the ‘Submariner’ and ‘200m—660ft’ waterproof rating, making those pieces the so-called 4-line dials, alternatively known as the OCC models.

The watches released before the Cal. 1030 achieved chronometer status were not permitted to include the extra text, making them the 2-line dials.

Other disparities, such as missing units on the depth rating or various lines of text picked out in red, represent particularly rare versions of an already scarce watch. There are even Explorer-style dials with their 3/6/9 hour markers, or co-branded Tiffany & Co. models, surviving examples of which number barely into double figures. 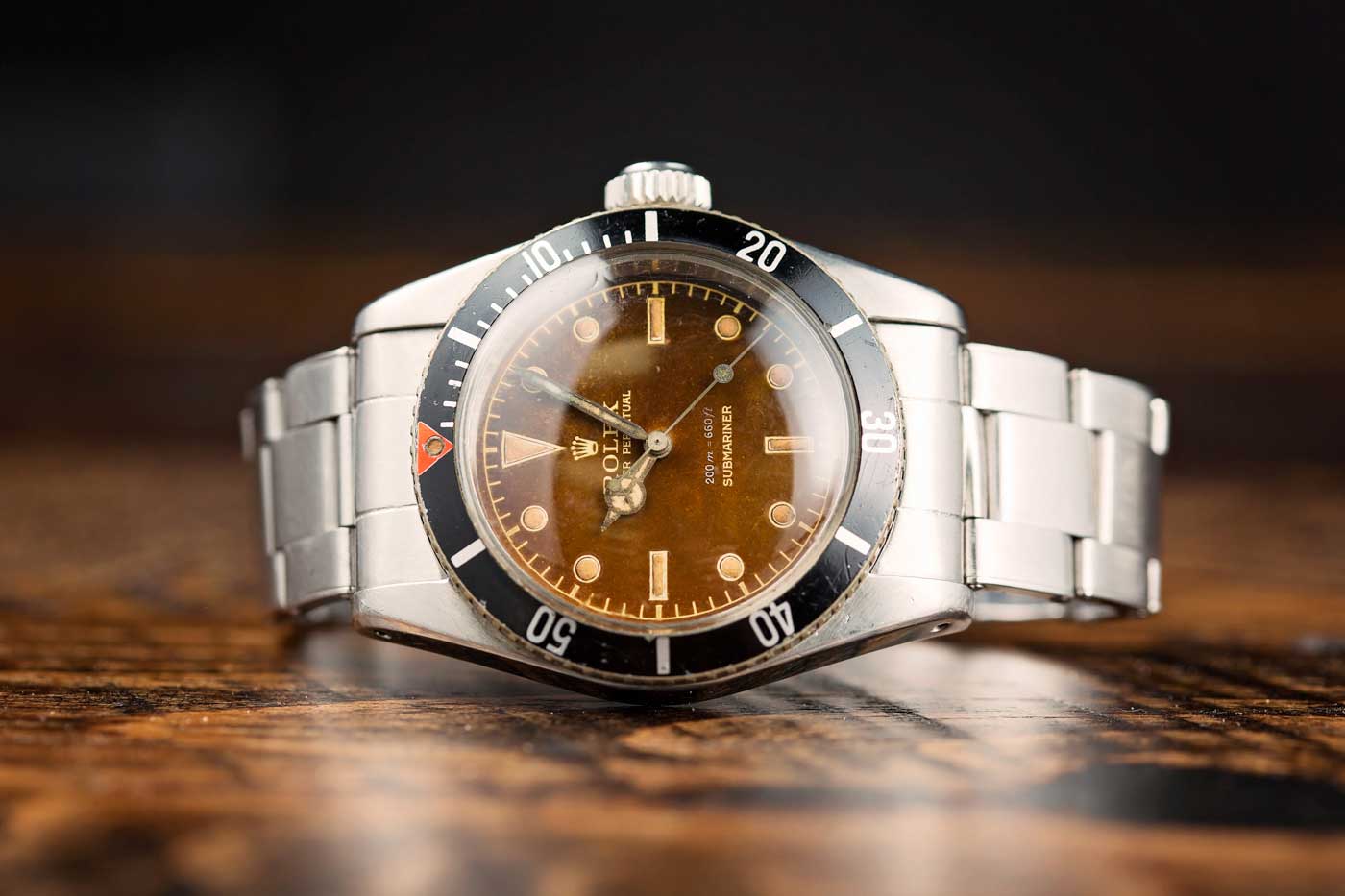 As you might expect, a watch with the ref. 6538’s pedigree, timelessness and direct link to pop culture’s most enduring hero, does not come cheap. Finding one costing less than six figures can be described as either a real bargain or something you should do a great deal of research on before pulling the trigger.

Generally speaking, the rarer the model the higher the price, but a watch’s condition also plays a huge part in its value, or lack of. When the ref. 6538 was released, Rolex’s reputation as a manufacturer was still more about the extremely tough tool watches they created rather than their aspirational quality, and they were worn by those engaged in all sorts of extreme situations. 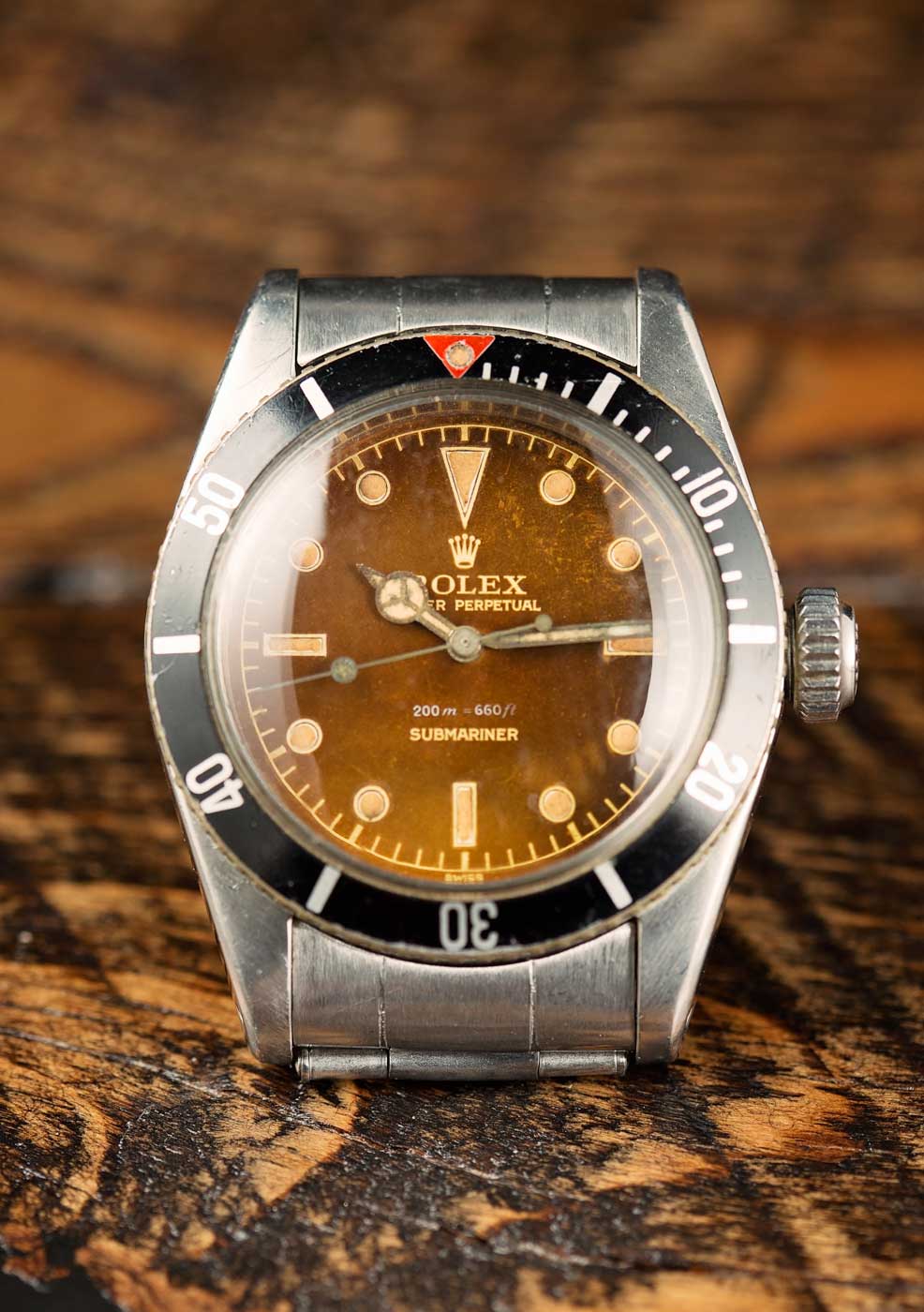 What are your thoughts on the Submariner 6538?

But robust or not, damage to certain elements of the watch worn under these conditions was inevitable. While things like a tropical dial or hands and indexes with an attractive patina can actually add enormously to both the personality and the price of the watch, a mangled case is a mangled case. A less rare example in good shape will still fetch more than an ultra limited piece which has been badly knocked about.

In all, the ref. 6538 Submariner, or the Bond Sub, or the Big Crown Sub if you prefer, is a grail watch in the eyes of most Rolex collectors. A fascinating step in the range’s long and winding road, it has all the visible early genetics of the horology world’s greatest thoroughbred.

One Response to “The 2 Year Wonder: A Rolex Submariner 6538”