Strange Fruit: Some of the Weirdest Watches Ever Made

Watchmaking, at its finest, is an art form, and enjoys the same freedom of expression as any other. There are really no rules as to what a timepiece must look like, nothing to dictate what shape it should be, save that it needs to realistically be able to fit on a wrist.

That sense of unrestrained inventiveness has brought us a number of wonderfully bizarre models over the years, pieces that go far beyond telling the time and are light years away from the established rounded curves of the accepted form.

Below, we’ll take a look at a few of the most extreme departures from convention with a handful of horology’s weirdest watches.

Maximilian Büsser and Friends are less a watchmaking brand than they are a collective of conceptual artists. As such, they don’t produce anything as run-of-the-mill as mere watches, but rather “three-dimensional kinetic sculptures” referred to simply as ‘machines’. 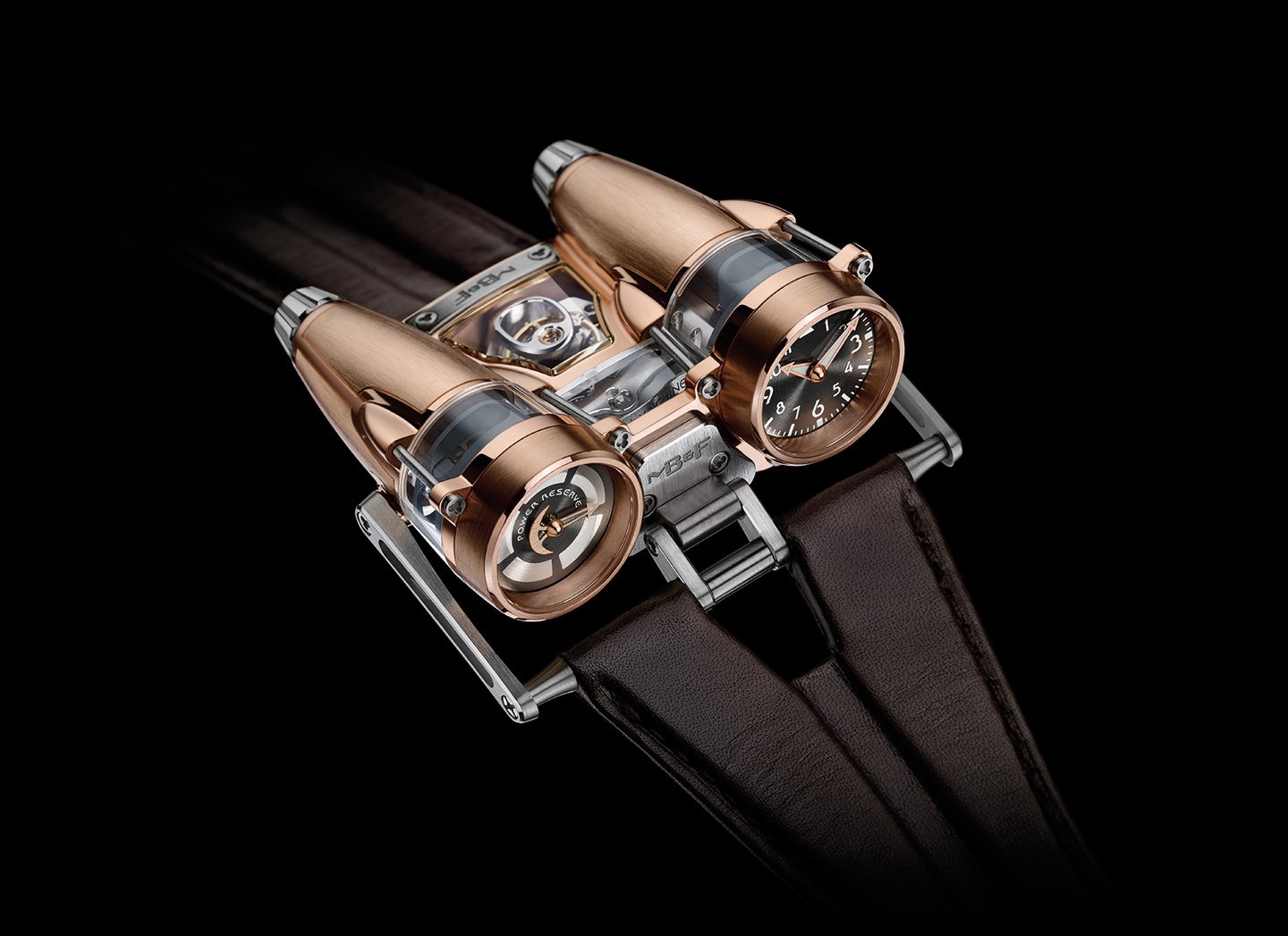 MB&F Machine No. 4 is one of the weirdest watches we’ve ever seen

Futuristic, avant-garde and anarchic, they are, nevertheless, crafted with one eye on age-old traditions, but radicalized for a look that is truly unique.

The best way to describe the design of their first aviator’s ‘machine’, the HM4 Thunderbolt, is to get you to imagine an A-10 Warthog ground-attack aircraft, but reimagined for the steampunk era.

Its architecture consists of two pods lying parallel to each other, bearing a striking resemblance to the A-10’s massive engines, on the end of which are a pilot’s watch dial on one side and a power reserve indicator for the manually-wound movement on the other. 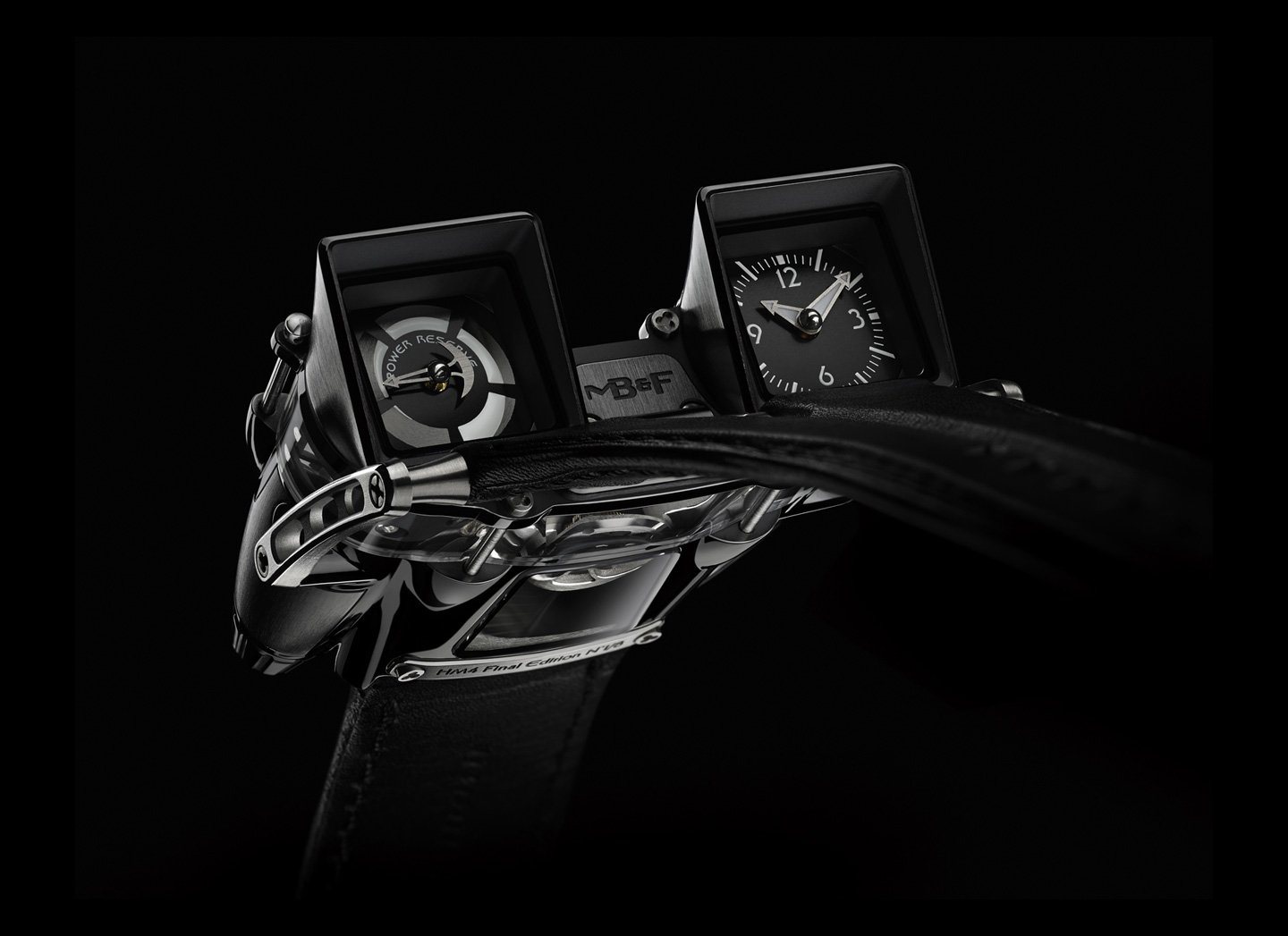 The styling is at once ultramodern and strangely retro—something that would have blended right in as a prop in the movies Flash Gordon or League of Extraordinary Gentlemen.

As a workable timepiece, it is actually one of the most legible creations ever to emerge from MB&F, in that it has something as conformist as a dial and, rather than building in hyper functionality, it remains a time-only piece.

The caliber, an entirely in-house engine taking three years and 311 specifically developed components to complete, lies in-between the two pods and is visible from both above and below through some painstakingly engineered sapphire. Its dual mainspring barrels drive two vertical gear trains, powering the hour and minute hands as well as the power reserve. The dials themselves are angled so that the wearer doesn’t need to move their wrist to see them—ideal for pilots not wanting to take their hands off the controls. 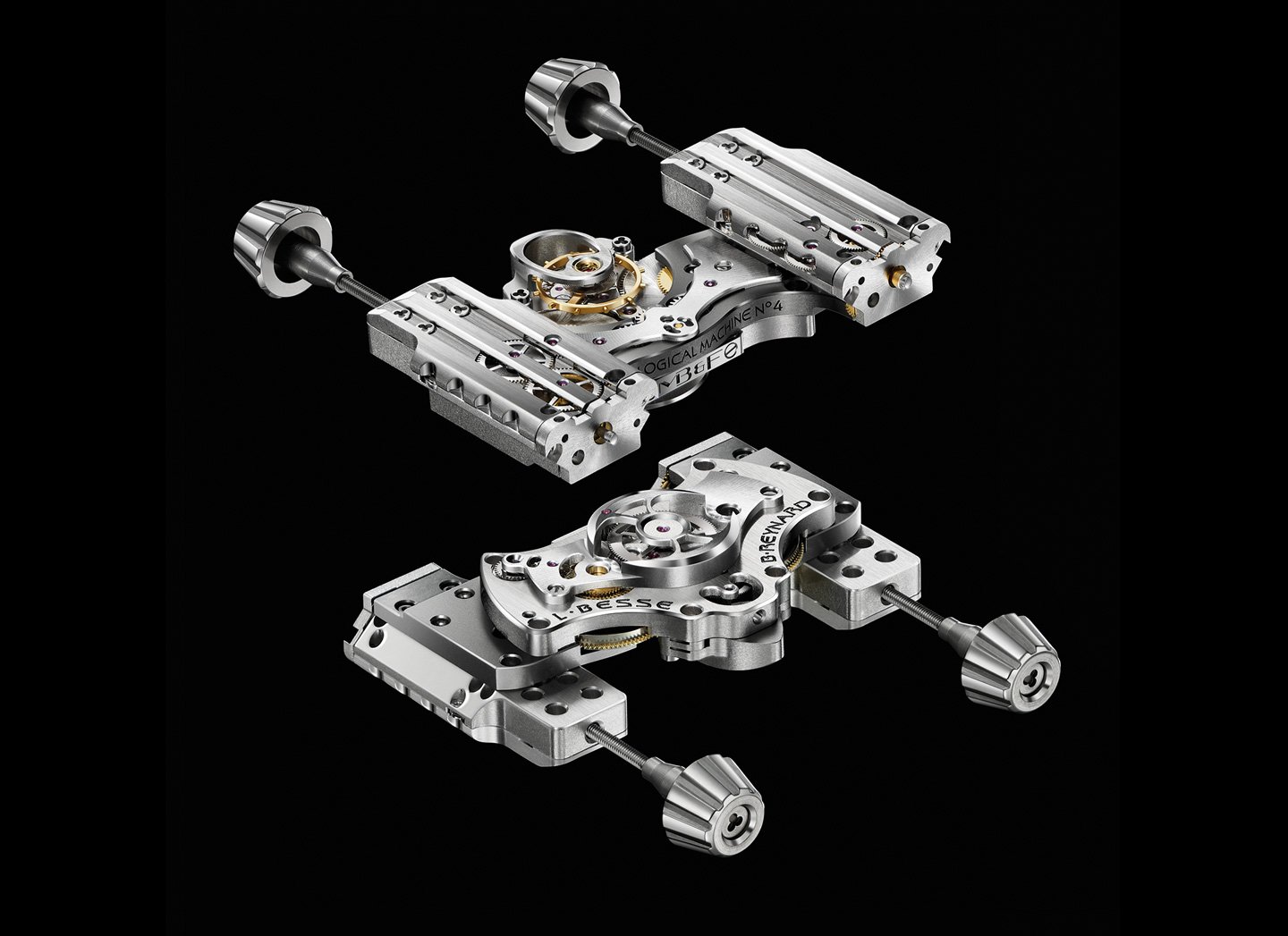 The far out styling is certainly not for everyone, and at around $158,000 each, only a few of those it does appeal to will be able to afford one. But there can be no denying that the MB&F Thunderbolt is a breathtaking achievement. As a rebellious take on the whole concept of the timepiece, you won’t find many to equal it.

Really ramping up the steampunk vibe, LA-based manufacture Devon Works is another concern reworking the traditional model of displaying time, by bringing in a more industrial edge.

The Tread 1 bears practically no similarities to the image you get in your head when you hear the word ‘watch’. It is easier to think of it as a battery-powered, belt-driven electronic gadget that happens to tell the time while simultaneously turning every head in the room.

It is a huge contraption but, thanks to some well thought out lug structuring, it still fits comfortably on the wrist. Inside, the thermo-compensated quartz movement controls the four tiny micro step motors that power each of the patented TimeBelts, and it is these treads that present the time.

The rectangular and insanely tough polycarbonate crystal case and system of interweaving belts earned the Tread 1 a finalist’s spot in the 2010 Geneva Grand Prix—losing out in the ‘Design and Concept’ category to, strangely enough, the Thunderbolt, above. Many believe the presence of the rechargeable lithium polymer battery in the Devon Works machine was the deciding factor against the all-mechanical engine in the HM4, but then the Tread 1 is a tenth of the price of the MB&F piece. 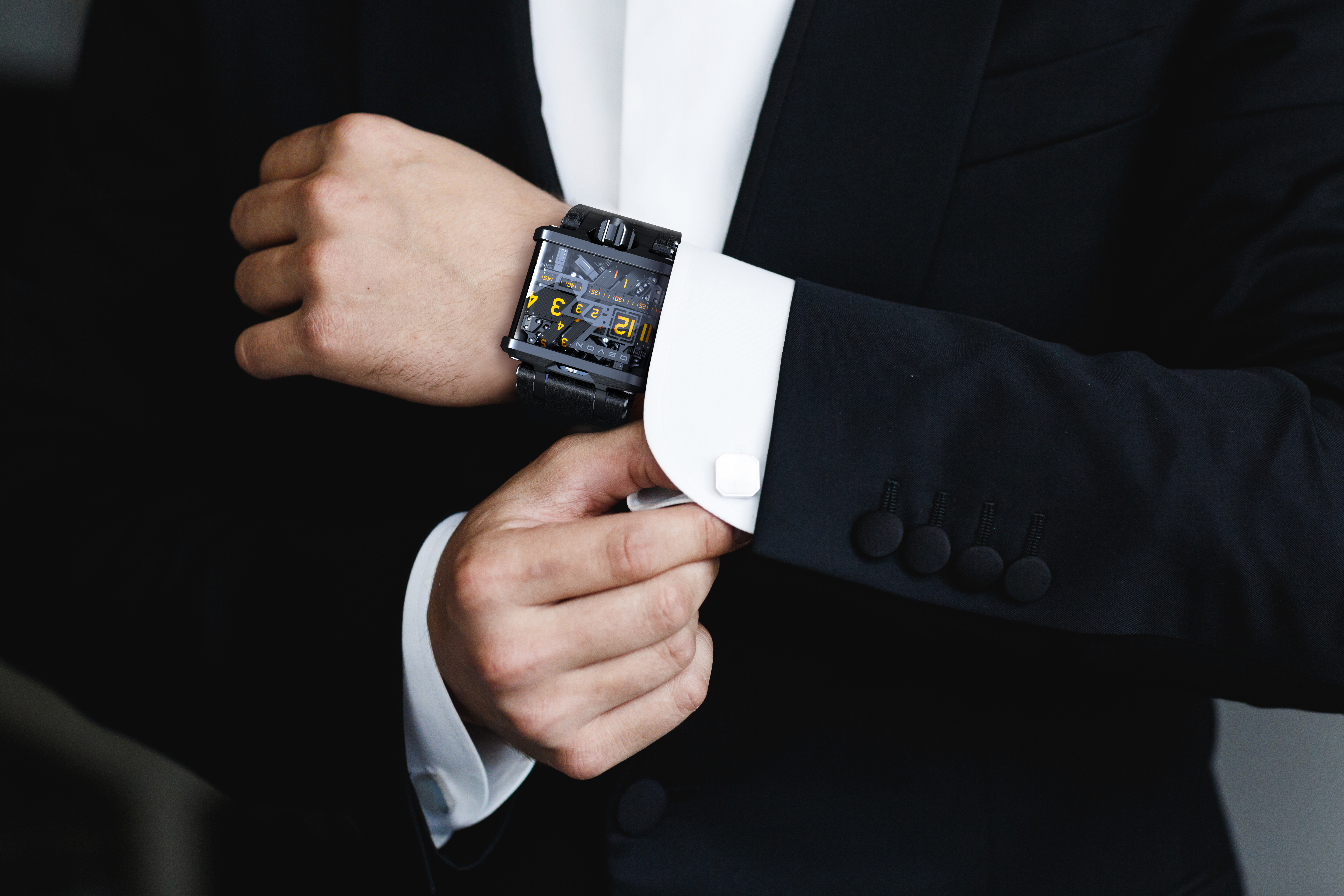 As hard as it is to believe, this watch actually can fit on your wrist

Regardless, it is an extremely impressive instrument and a definite breath of fresh air in the sometimes too conservative horology world.

As well as doing away with the traditional dial, it also replaces the winding crown with an enormous controller which looks and acts, well, like a really big winding crown. Mounted to the bottom of the case, it is used to set and adjust the time which remains accurate to within half a second a day, according to Devon Works.

Retailing for around $17,500, the Tread 1 is still no give-away, but it is an extraordinary piece of engineering that actually borders on the graceful, in a mechanized, cyber-future kind of way. Not one for the shy and retiring, it is a dream purchase for the well-heeled uber-nerd.

No list of weirdest watches is complete without at least one entry from Swiss mentalists Urwerk.

The UR-CC1 King Cobra features a linear readout that looks not unlike the speedometer in a vintage Mustang, that reportedly took the company three years to perfect. It features two horizontal gauges on retrograde cylinders for the hours and minutes, while a third on the top indicates the seconds as both an analogue and a digital display. (Why wearers would need to see the seconds twice is not explained, but it remains a world first). 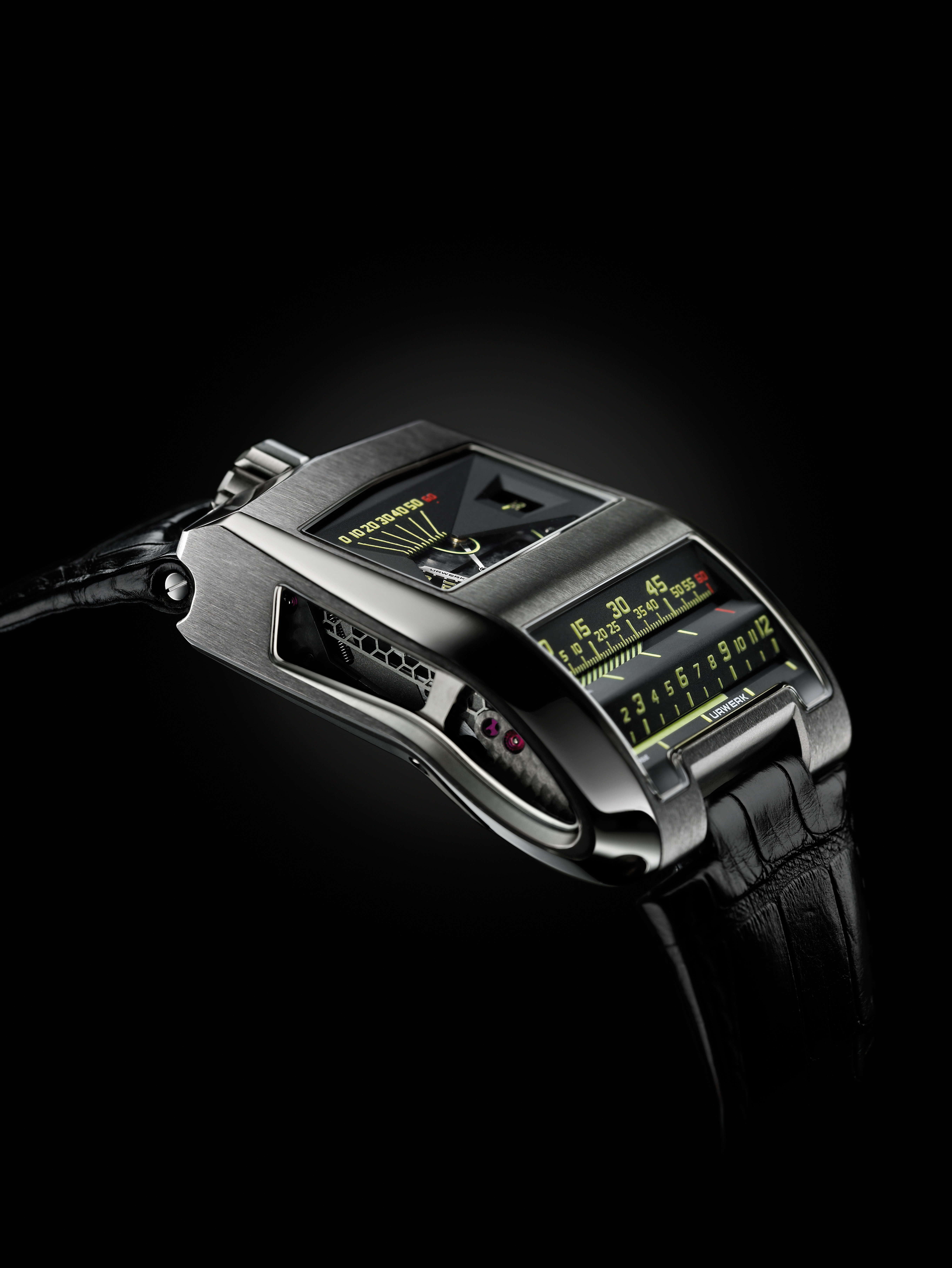 One of the weirdest watches we have seen: The Urwerk UR-CC1 King Cobra

The time is shown by progressive bars advancing along the scales; the minutes moving steadily and the hours jumping, all controlled by an automatically winding caliber visible through the uppermost dial and along the sides of the watch.

With the weight of the movement’s cylinders being considerably heavier than traditional elements in a standard watch mechanism, Urwerk’s photolithography cohort Mimotec have crafted most of the components out of lightweight but incredibly tough silicon, fabricated in a honeycomb pattern.

Protecting it all, and at around $250,000 a pop you are probably going to want to take care of it, is the ‘Rotor Fly Brake’, a patented pneumatic shock absorbing system that reduces wear to the movement and guards it from vibration and sudden impact. 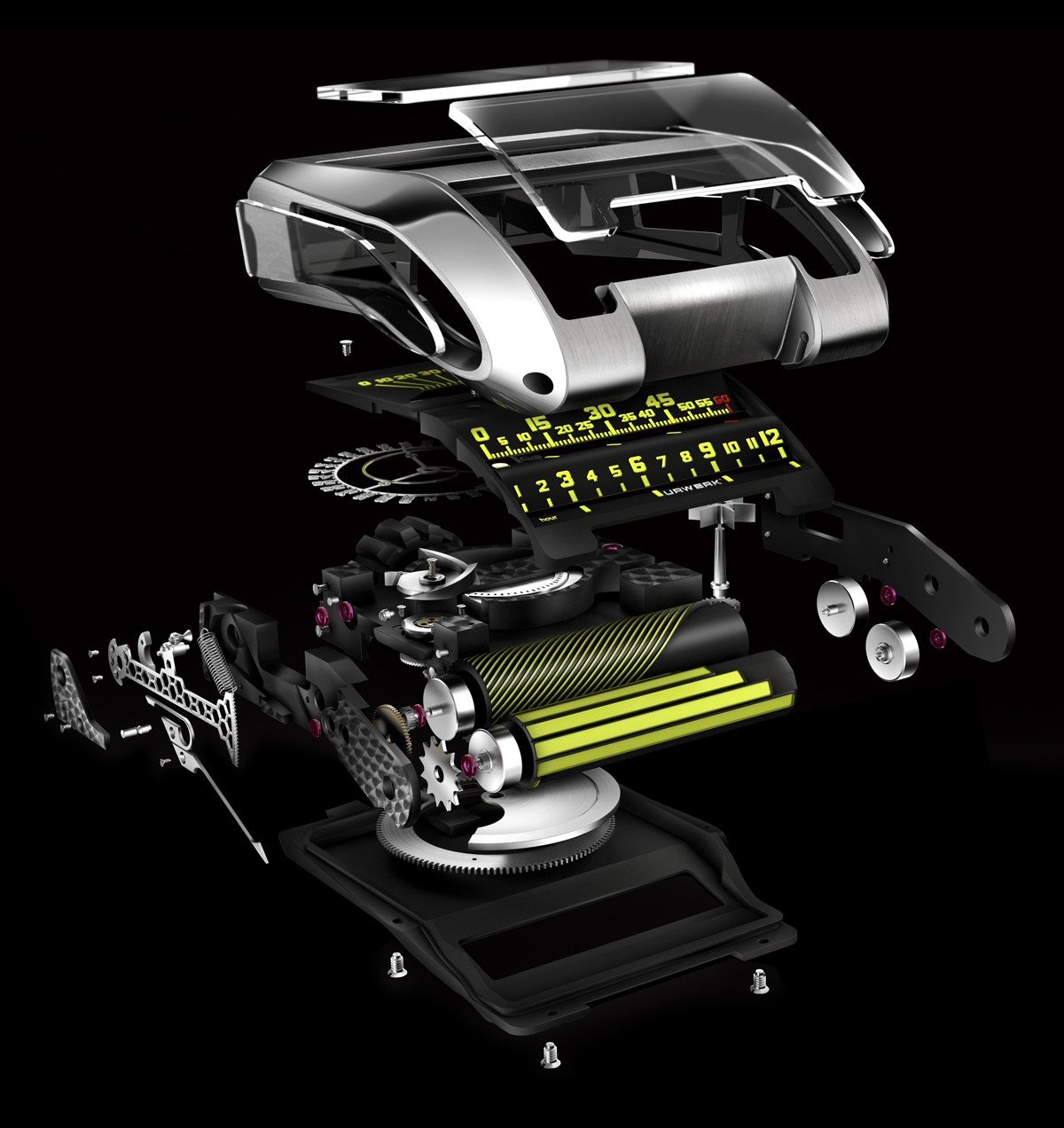 An inside look at the Urwerk UR-CC1 King Cobra

As with the other weirdest watches on this list, the UR-CC1 is an intriguing mix of the highest of the high tech, wrapped up in a body with a definite retro feel.

Available as one of two limited editions, in either white gold or black gold, both with a titanium case back, each model is restricted to just 25 examples apiece.