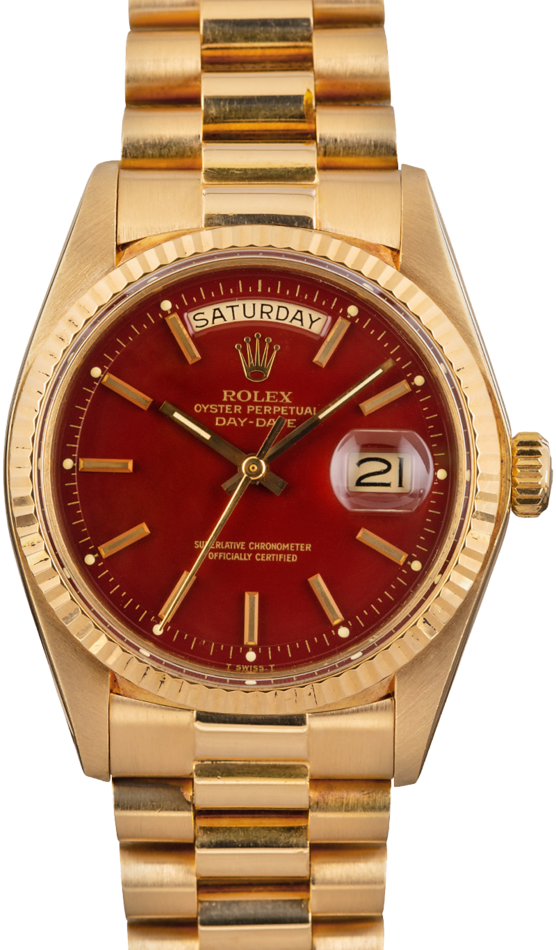 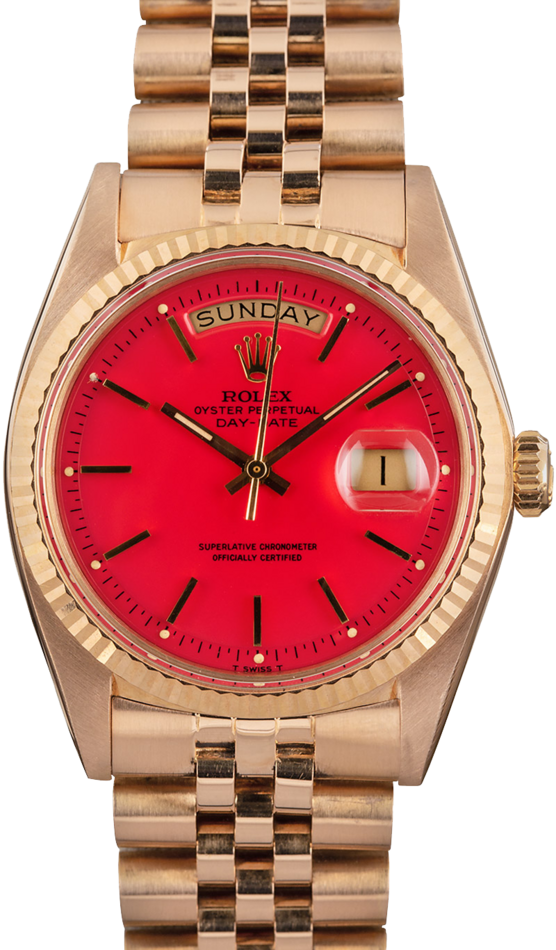 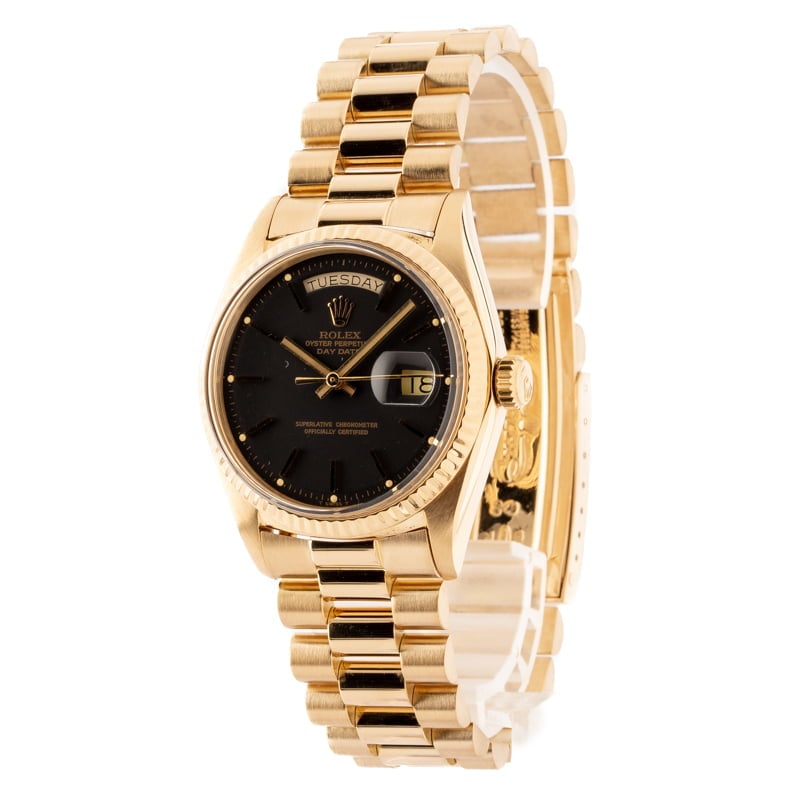 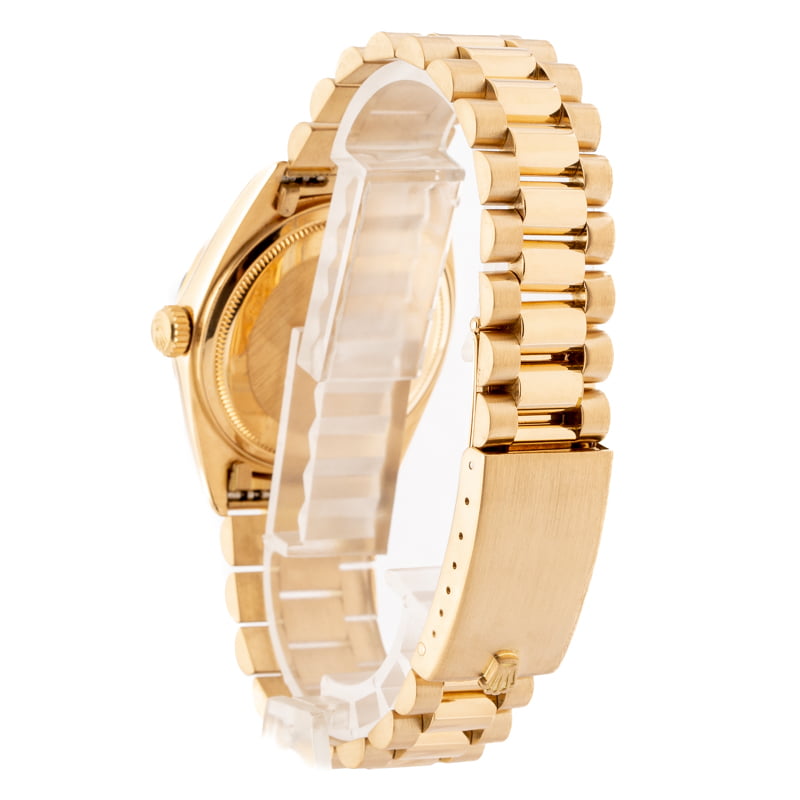 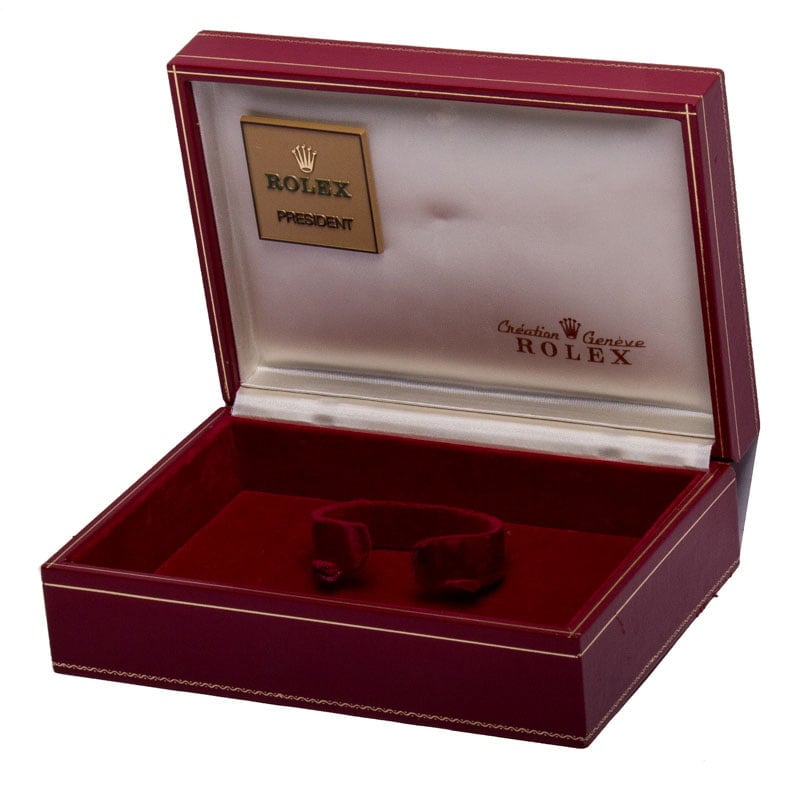 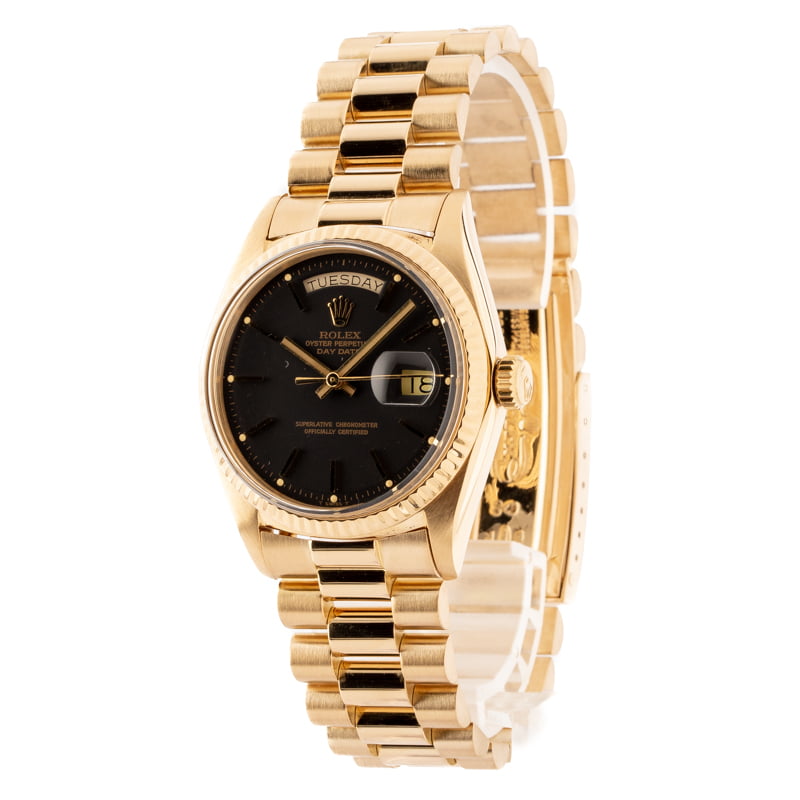 This Rolex watch is in vintage condition with light surface wear to the bracelet, case and bezel.

The Rolex Day-Date was released in 1956. The pre-owned ref. 1803 has a caliber 1556 automatic movement and a black dial which displays the day of the week in addition to the date.  "President" was originally the term for the bracelet, but became the well-known nickname for this piece. Many US presidents are known to have worn the Day-Date. Many other influential men also wore this watch, Winston Churchill, Martin Luther King Jr, BB King, Tiger Woods, Eric Clapton, Jay Z, and Brad Pitt, to name just a few.

In 1972, Rolex added a new feature to the President Day-Date. It is commonly referred to as the "hack" feature and allowed for wearers to stop the second hand if he or she wanted to reset the time to fit another more accurate source. This vintage Day-Date is among the first to be released with this feature. A true part of Rolex history.

I was very satisfied with my purchase, an absolutely beautiful piece; I wanted to add that the staff had been phenomenal and helpful. Larry knew his stuff and recommended me getting the 1963/64 model of the Day Date as it has a little out of the ordinary "door stopper" markers and the sword hands, slightly more collectable and different. The Sales team Alex and Tanya was superbly helpful and patient with me.

Perfect condition as advertised. I got great help from Sarah discussing the watch and the process which was easy made me feel safe and secure. I'm happy with my purchase and I will buy another watch from Bob's. This thing is beautiful! It was a good realistic and competitive price without having to go overseas to get it. It arrived at my front door noon the next day And have not taken it off yet!

The watch is beautiful, for it's age it's been taken care of with an amazing attention to detail. Bob's was easy to work with and quick with shipment.

Arrived exactly as described less than 24 hours after ordering. This was my second purchase of the same Rolex model in about a month. The first purchase did not go well on multiple levels. Bob’s had the best inventory of this particular model, so I gave it another shot.

No marks or scratches noticeable on a 1970 model. Arrived super fast, and customer service is superb.

This watch is in absolutely incredible condition! I was amazed to see that it came with the (or an) original box! If the watch has ever been polished, it was done extremely well because I could not tell.

WAS A GIFT FOR OUR DAD WHO HAD LOST HIS ORIGINAL ROLEX. THIS ONE PUT A SMILE ON HIS FACE AND IS CLOSE TO THE ONE LOST.

The service was excellent ,The watch itself was in excellent condition... I highly recommend , Bob Watches..

Seems to be the real deal and beautiful watch Quick shipping

Have purchased from you before … ALWAYS satisfied. Also, have dealt with Laura before. Extremely knowledgeable, personable and professional.

I love it. My first Rolex. I would start collecting. And the shipping and delivery was super fast.