Released in the midst of World War II, the Rolex Air-King is the only remaining watch in production from the original “Air Series.” Released in 1945, the Air-King joined the ranks of the Air-Lion, Air-Giant, and Air-Tiger, all created to honor the RAF pilots of the Battle of Britain. As with many of their other models, the Air-King was designed with a particular type of person in mind. In this instance, it is pilots. Over the years, pilots have adopted the Air-King, with some companies, like Pan Am, giving them as gifts to retired pilots. The Air-King look is well known, and has become a highly prized collector’s piece. 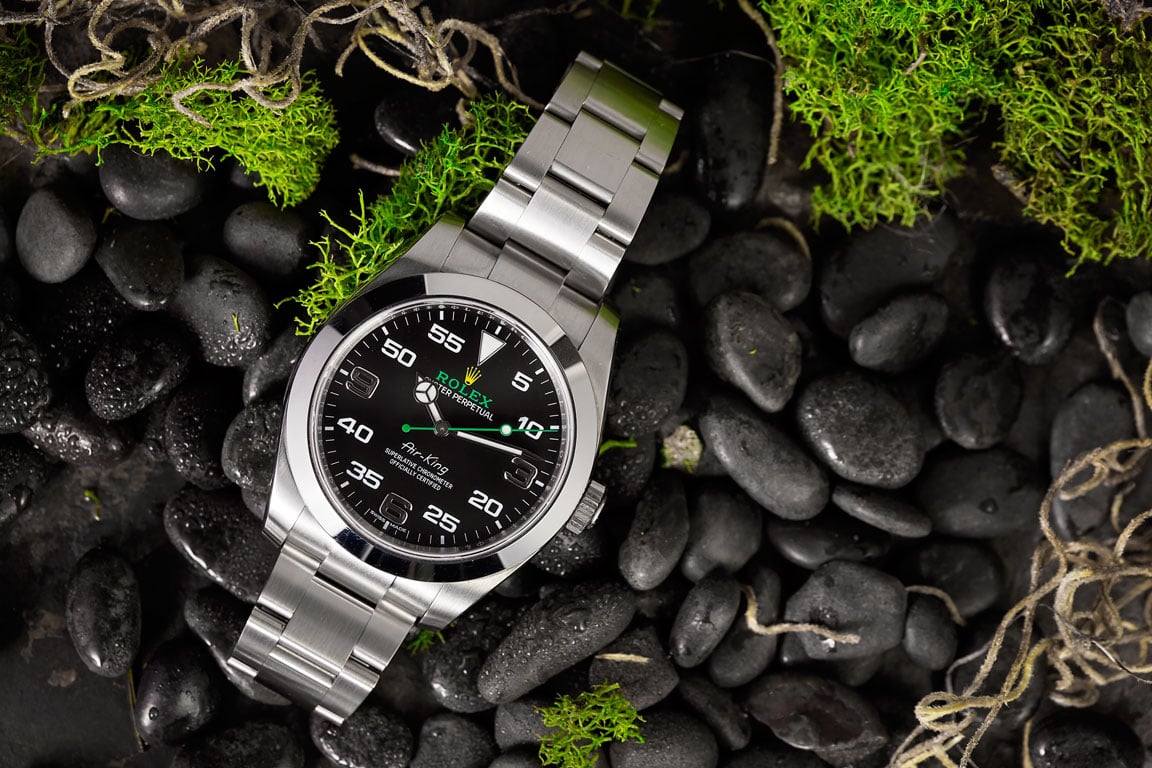 The Air-King was modified a series of times, introducing ref. numbers 4499, 6552, 5500, 14000, 14000m, and 114200. The transitional Air-King ref. 6552 does not utilize the Hunter movements, as several of the other early models do. Rather, it features caliber 1030. The 5500, introduced in 1958, also took advantage of another movement, using a caliber 1520 or 1530 movement. However, importation laws restricted the 1520 movement, resulting in a reduction of jewels. Many variations of dials were used during the production run, including the extremely rare double red dial, featuring the words Air-King and Super Precision in red. 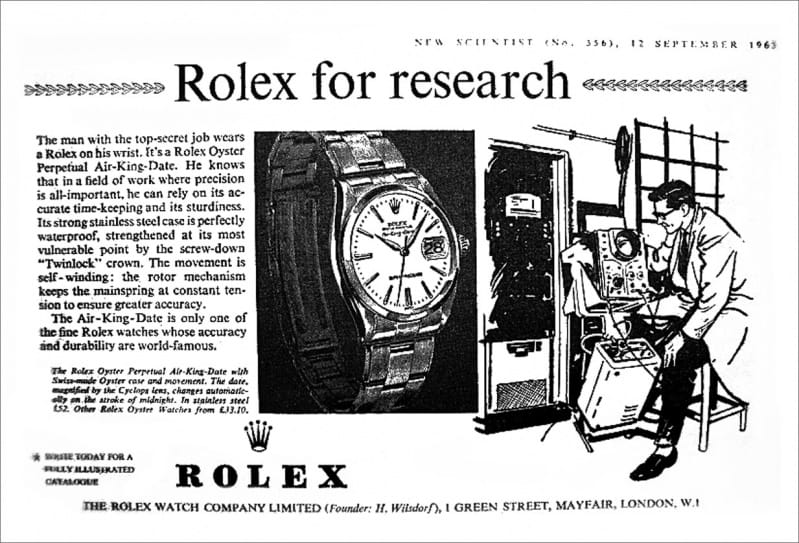 Despite the early years of new references and advances, in 1958 a separate Air-King line was developed featuring the Air-King Date and 550X models. Utilizing advances made on the Explorer, the 5500 case measured 34mm and served as the foundation for what would become the longest-running generation of Air-King watches. While the 5500 reference number was also used for certain 34mm Explorer and Oyster Perpetual models, it is most frequently associated with the Air-King, and is often considered to be the quintessential Rolex Air-King reference.

Through The Years:
The Rolex Air-King Reference 14000

For nearly 37 years, the Air-King line remained fairly unchanged. It was eventually upgraded to feature a sapphire crystal and new caliber 3000 movement with the release of ref. 14000 (pictured below). The following ref 14010 introduced the engine turned bezel. In 2000, both were updated to feature the caliber 3130 movement. 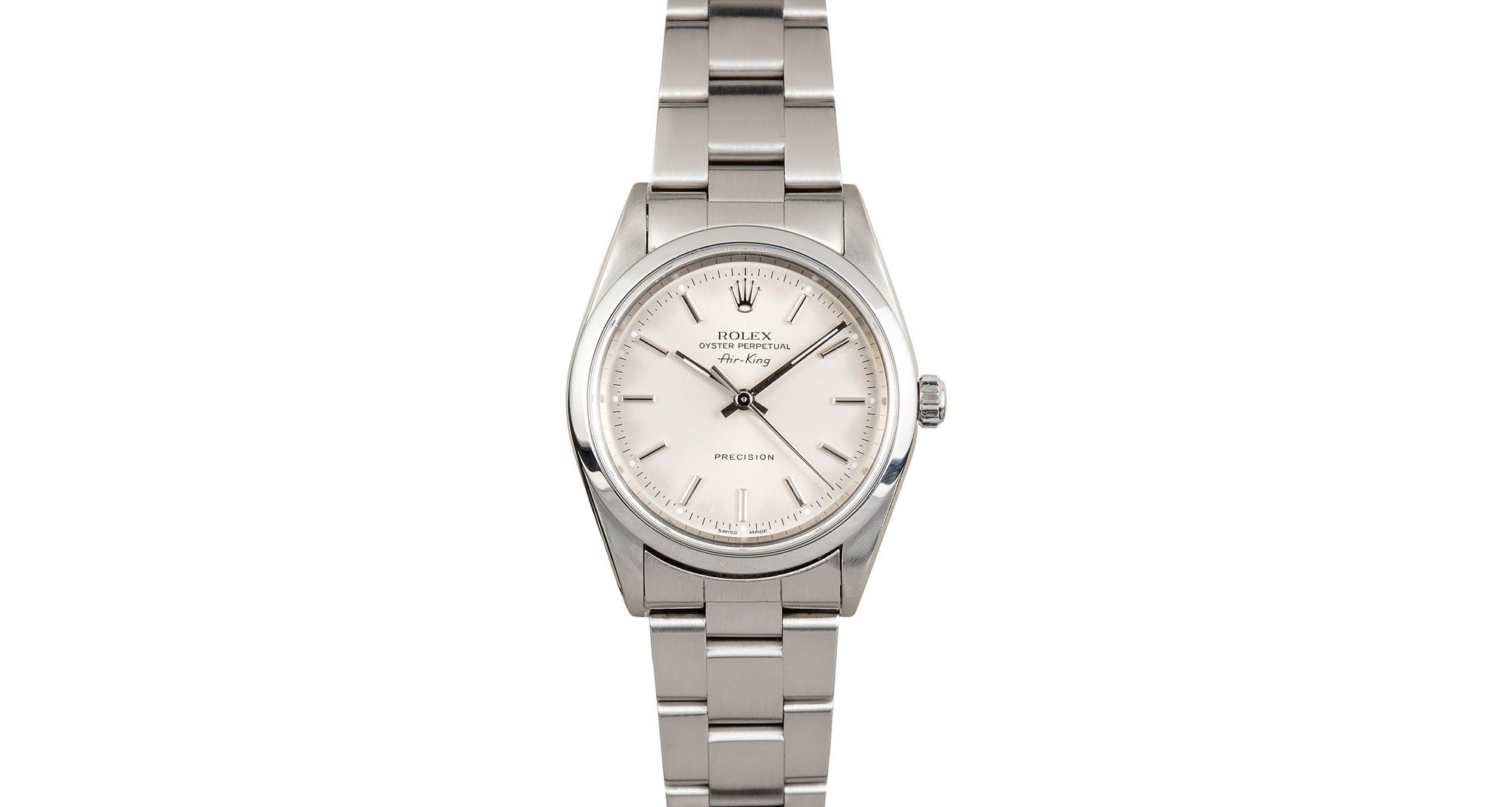 In 2007, the 14000 series was replaced by the new and improved 1142XX. This reference series changed the look of the Air-King. Featuring a thicker case, the new Air-King was slightly larger. It was topped with a concentric dial and sported a brand new machined Oyster bracelet. Though the original reference had an engine turned bezel, it was later removed, though Rolex did offer the the option to add a white gold fluted bezel. With this reference, the Air-King become officially COSC certified, even before its popular kinswatch, the Submariner. 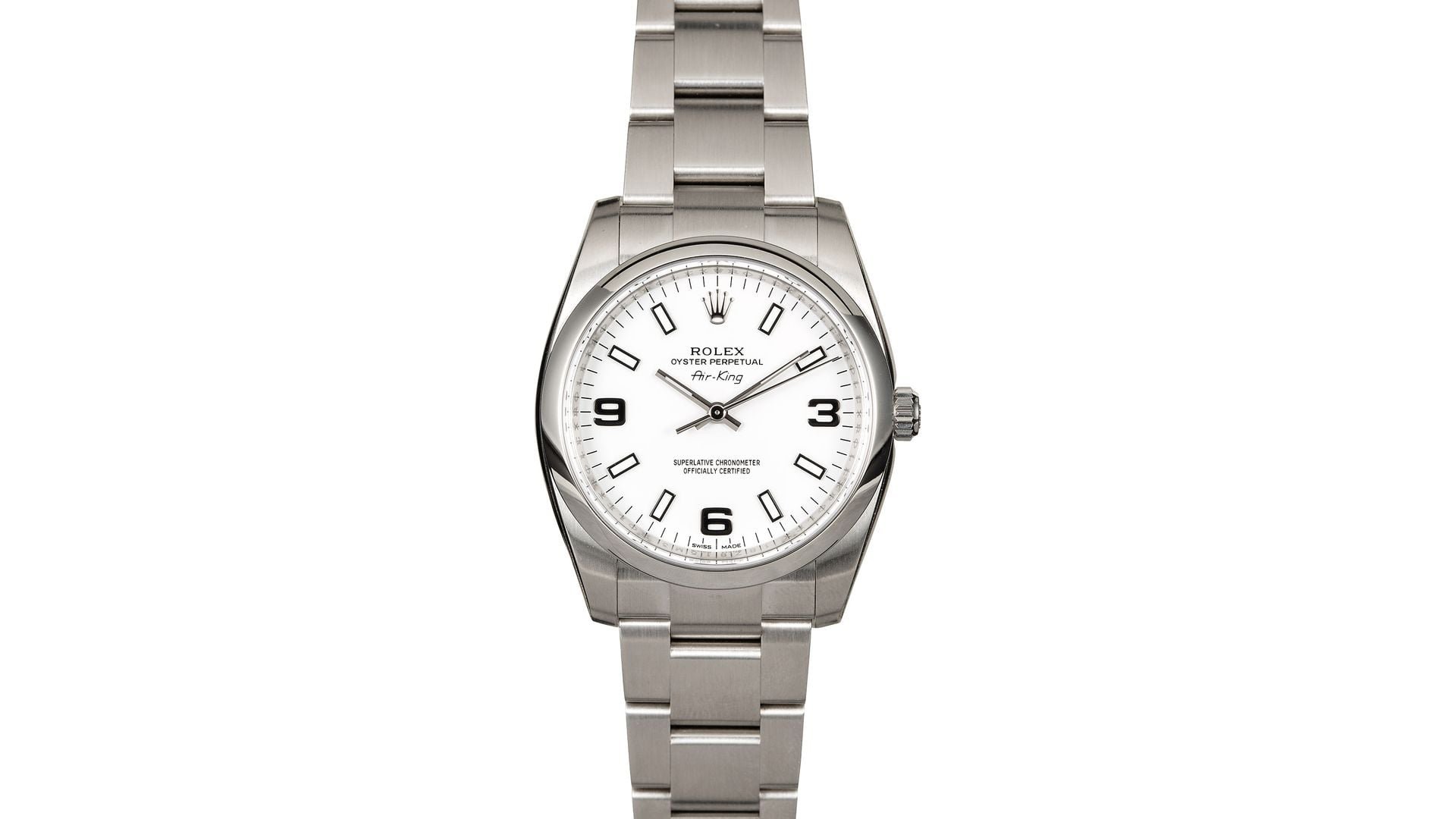 Though water resistance is not necessarily a cause for concern for most airmen, pressure can be. With the Rolex Oyster case, however, many of these concerns can be put to rest. Invented by Rolex in 1936, the Oyster case was the first waterproof watch case, utilizing Rolex’s patented Twinlock system. The Twinlock system utilizes two sealed zones: one inside the tube of the crown, the other inside the winding crown itself. By screwing the bezel and crown tightly, the wearer can ensure water resistance. The “oyster” name is derived from the clamped shut look and action of the case, greatly resembling an oyster. The clamped case provides a safe, dry, and pressure resistant environment for the watch’s delicate interior components up to 100 meters (330 feet). The watch case undergoes a rigorous three part test including a vacuum test, a compression test, and a condensation test, to ensure it meets pressure-resistance requirements.

The current Oyster case does not only protect the watch through its use of screws, but also from the material it is made from. Utilizing the super alloy 904L stainless steel, the case ensures strength and durability. Other uses for this super alloy include high technology, aerospace and chemical industries. Extremely resistant to corrosion and scratches while retaining its aesthetic, highly polishable appearance, 904L stainless steel is the perfect material for Rolex’s tool-style watches.

This version of the Rolex Air-King also takes advantage of another of Rolex’s great technological developments: the perpetual, mechanical, self-winding movement. This particular model is equipped with calibre 3130. As with most of Rolex’s movements, caliber 3130 is entirely developed and manufactured by Rolex, and is a certified Swiss chronometer. The movement is designed to harnesses the energy of natural wrist movements to provide a reliable and clean source of power for the watch movement. If moved at least once every 48 hours, the watch will continue to run without the need to be wound. The movement utilizes a half-moon shaped oscillating weight, which pivots freely in both directions on its axle. As it rotates, the rotor continuously winds the Perpetual movement’s mainspring. Rolex takes it a step further with two distinctive red reversing wheels, which ensure efficient winding of the movement regardless of the direction in which the oscillating weight rotates. Thus, any simply movement of the wrist will produce enough energy to keep the watch running.

While the Air-King ref. 116900 may look like a completely different watch, it stays true to its humble beginnings as a pilot’s watch.  The case is still equipped with a screw-down crown that can withstand depths of up to 330 feet as well as higher altitudes.  This newer reference, however, takes advantage of a Twinlock screw-down crown for extra waterproofness, a scratch-resistant sapphire crystal, and 904L stainless steel.  While the “Air-King” logo has been moved lower on the dial, avid Rolex collectors will be pleased that it is still present on the dial, just like the original Air-King. 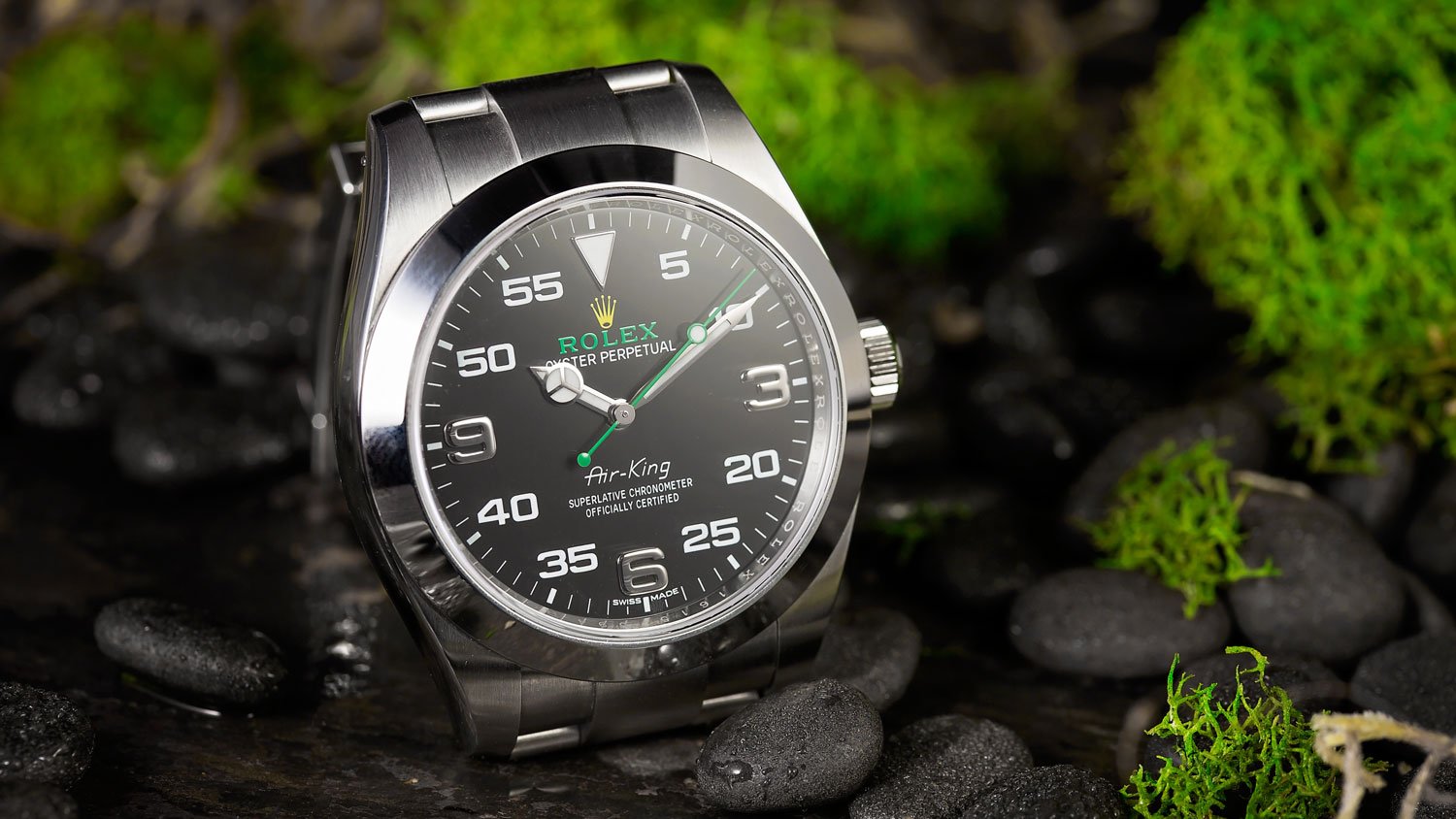 Originally part of an entire Air themed series, the Rolex Air-King is the only watch from the series to remain in production. With its aesthetic appeal and fine, precise construction, it is no wonder the Air-King has had such a long production run, and is still produced today.