Just as Rolex created watches specifically for sportsmen and adventurers, like the Submariner for deep sea divers, Rolex also created watches for professionals, such as scientists. In 1956 Rolex introduced a new model named the Rolex Oyster Perpetual Milgauss, ref. 6451. The Milgauss was designed as an antimagnetic watch specifically for those who worked in power plants, medical facilities, and research labs. Before Rolex released the Milgauss, scientists and other like professionals had a serious problem; an electromagnetic field greater than 50 to 100 gauss would greatly disrupt the timing of a watch. Therefore, they either had to deal with a dysfunctional timepiece, or simply not wear a watch. However, the release of the Milgauss changed that. Tested in the 1950s by the European Organization for Nuclear Research (CERN), the world's pre-eminent particle physics laboratory, it was determined that the Milgauss resisted magnetic fields up to 1,000 gauss. This was a huge technological advancement, not only for Rolex, but for the scientific community. CERN was one of the first scientific institutions to test the Milgauss, however other scientists and institutions soon followed. 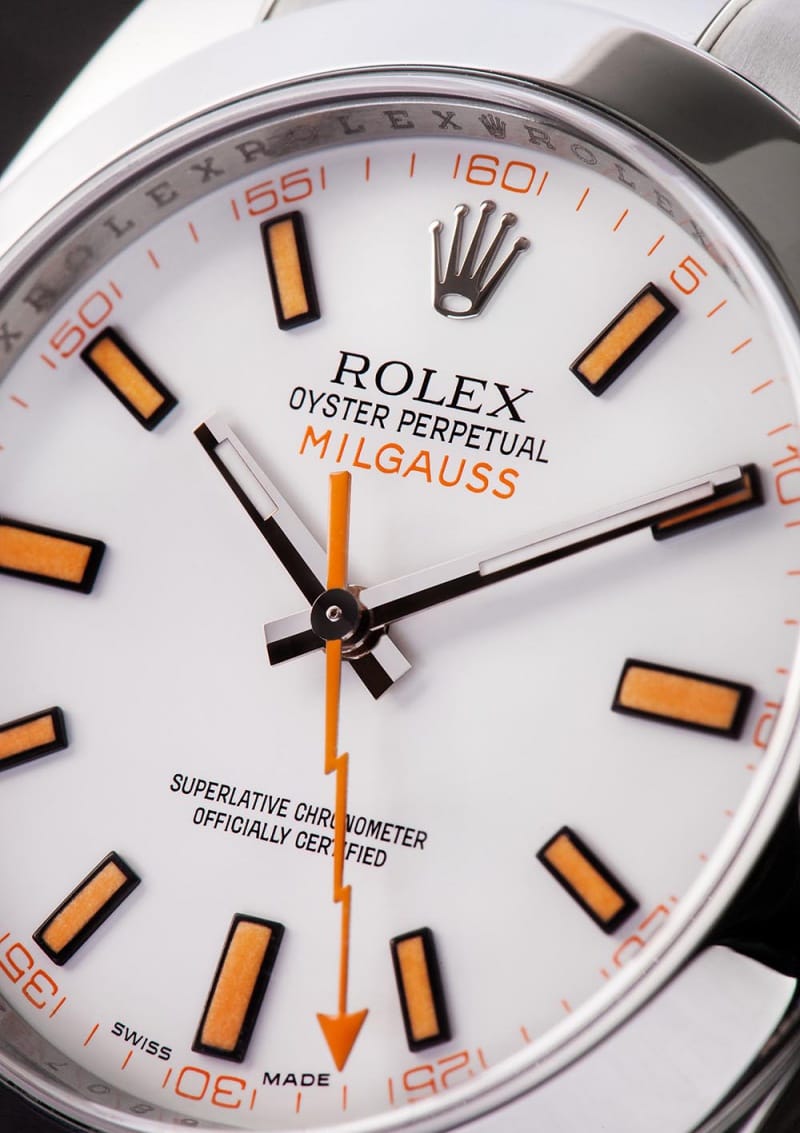 Capitalizing on the scientific theme, the name Milgauss was derived from the Latin mille, which means one-thousand, and gauss, the unit of a magnetic field. Thus, the name reflect how high of a magnetic field the watch can resist. The scientific theme was cemented when the Milgauss watch was worn by scientists at the European Organization for Nuclear Research (CERN) in Geneva. If some of the premier scientists in the world utilized Rolex watches, why shouldn’t the rest? The Oyster Perpetual Milgauss, with its many features, is a perfect tool for those with a passion for the worlds of science and discovery. 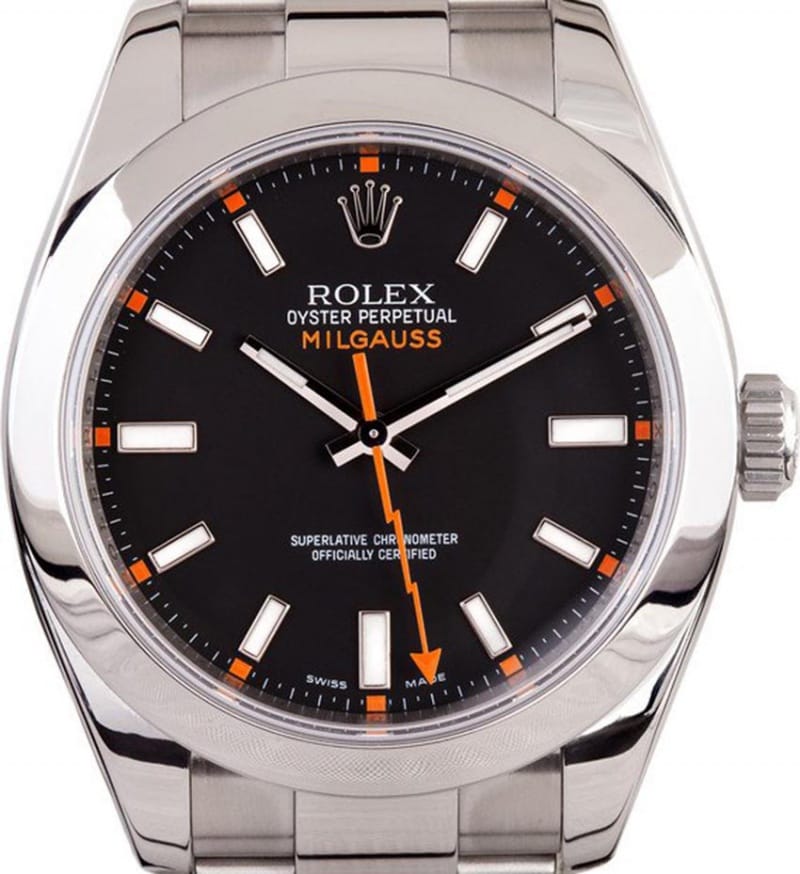 The original Milgauss was very similar in appearance to the Rolex Submariner, a very popular style for the brand. The original Milgauss features an oversized case and bezel, complete with the patented Twinlock crown, and a riveted Oyster bracelet. A special orange lightning bolt second hand has come to be one of the most recognizable features of the Milgauss. Combined with the watch’s bezel, the second hand can be stopped when setting time to ensure precise time setting. It is still featured on current models.

The Milgauss has a fairly short history, compared to that of many of Rolex’s models. Rolex only released two models of the Milgauss, with ref. numbers 6541 (the originaly) and a modified 1019. Ref. 1019 was released in the 1960s and 1970s, and was little changed from the original model. Unlike the original Milgauss, the 1019 offered two dial options; black and silver. Some 1019s were also released without the lightning bolt second hand, though many had it added later. 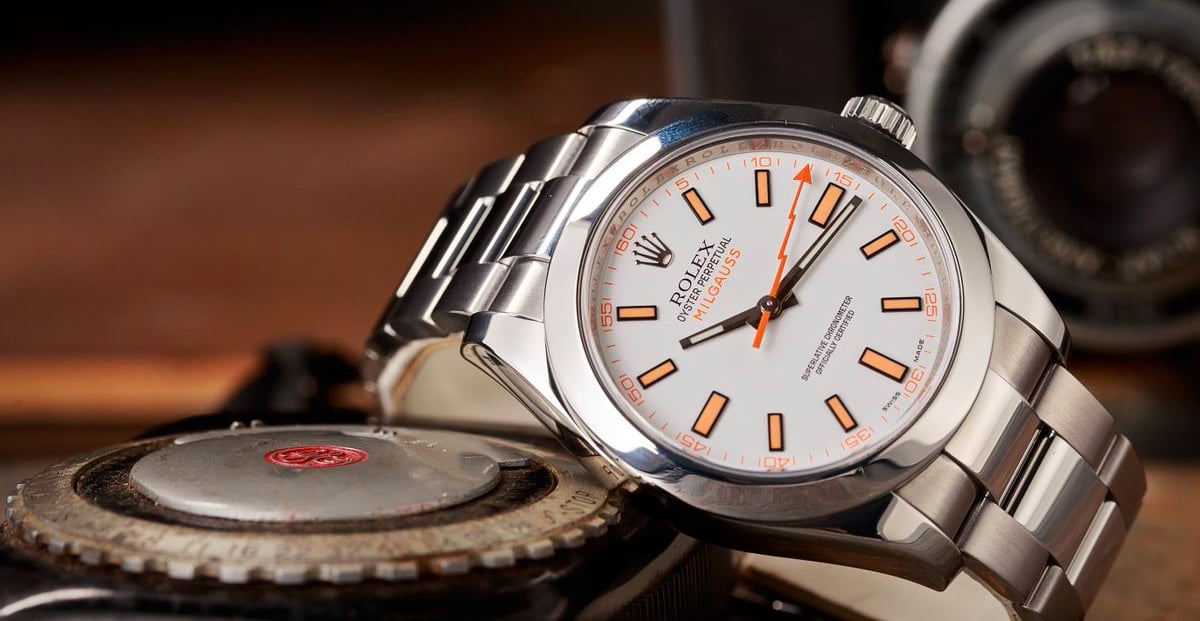 Despite its special features, the Milgauss line was discontinued in 1988. For nearly 20 years, the Milgauss was nearly forgotten. Then, in 2007, Rolex revisited their "scientist's watch," releasing three new versions of the new model ref. 116400, which is pictured above. The three versions vary slightly. The first two feature either a black or white dial with a standard colorless sapphire crystal. The special Glace Verte (GC) or "Anniversary" model features a black dial with a slight design difference, highlighted by a green-tinted sapphire crystal. The Glace Verte is named for this tinted glass insert, and is the only Rolex to feature this special edition.

The newly released Milgauss features several new technological advances. To increase the Milgauss’s resistance to magnetic fields, the new model includes a shield inside the Oyster case made of ferromagnetic alloys specifically chosen by Rolex watchmakers. The shield surrounds and protects the movement, ensuring it runs precisely. The current model is also equipped with a magnetic alloy Parachrom-Blu hairspring, which is finer than a human hair, yet resistant to magnetic fields and up to 10 times more resistant to shocks, such as from dropping the watch. Continuing the scientific theme, Rolex includes the symbol for magnetic flux density (the capital letter 'B' with an arrow) engraved in the magnetic shield. Though it is there, only a Rolex-certified watchmaker will ever be able to access and see it. 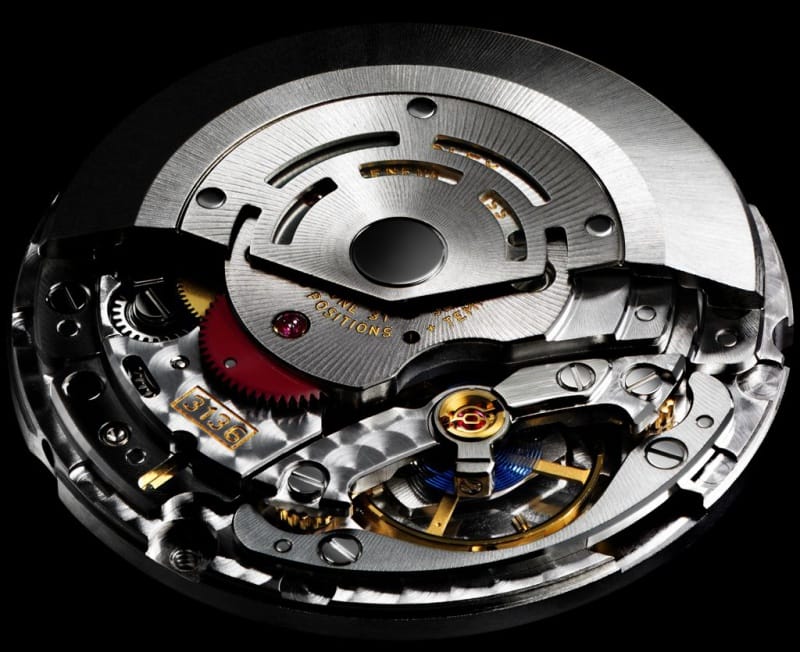 Due to its internal magnetic shield, the Milgauss is thicker than many other Rolex watches, including the similarly designed Submariner. However, it does maintain the same width and weight of 157 grams. The case is made of 904L polished stainless steel. This super alloy is generally used in the technology, aerospace, and chemical industries, where maximum resistance to corrosion is essential. Aside from its resistance to magnetic fields, its strength and corrosion resistance can be greatly appreciated from those working in scientific fields, where one might come into contact with highly corrosive materials. As with all Rolex Oyster cases, the Milgauss case is also water resistant up to 100 meters (330 feet).

Inside, the Milgauss is equipped with calibre 3131, a self-winding mechanical movement entirely developed and manufactured by Rolex. Protected by its magnetic shield, the movement also incorporates technologies to ensure exceptional resistance to magnetic fields. Like all Rolex Perpetual movements, the 3131 is a certified Swiss chronometer. This designation is reserved for high-precision watches that have successfully passed the strenuous Swiss Official Chronometer Testing Institute (COSC) tests.

The Oyster bracelet is a final aesthetic touch, which also offers many functional elements. Robust, yet comfortable, the Oyster metal bracelet offers a perfect blend of aesthetics and technology, blending the strength of the materials with the polished touch of Rolex. 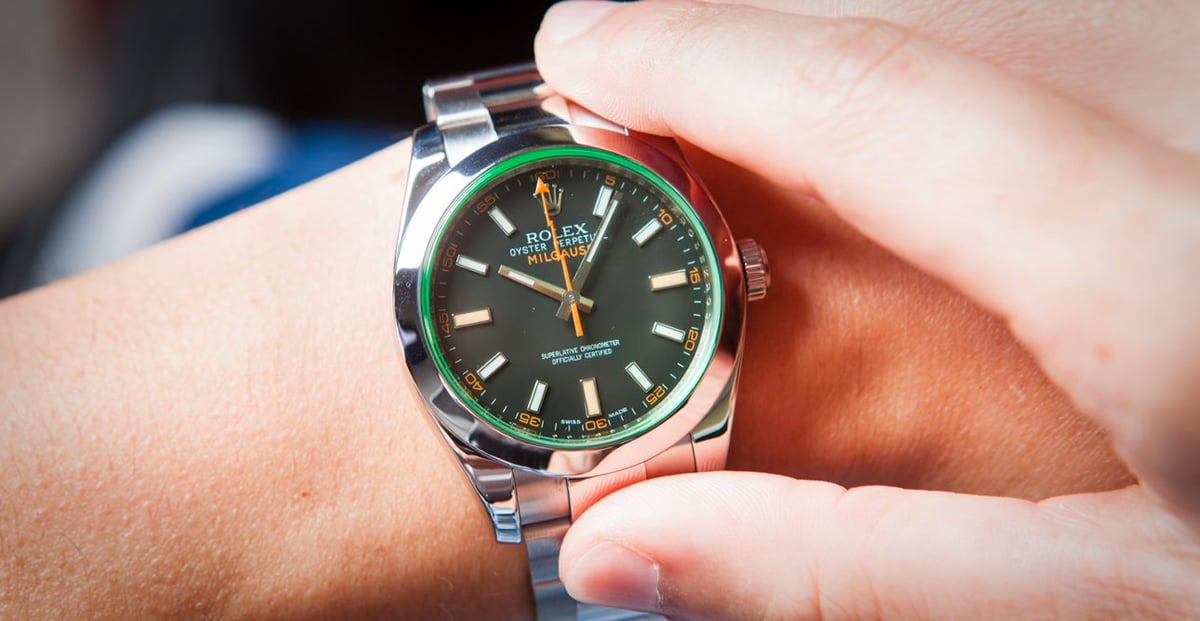 Whether the dial is black or white, the new Milgauss features an orange second hand, shaped like a lightning bolt to echo the original model. Despite its few variations and nearly 20 year hiatus, the Milgauss has remained faithful to its scientific heritage with its clean lines and highly innovative resistance to magnetic fields.

Several other factors contribute to the Milgauss remaining a highly sought after and prized model amongst Rolex collectors. These factors include its low sales and popularity during the 1960s and 70s, which has made the original Milgauss very rare with special models selling for high prices, such as the signed Tiffany & Co. model which recently sold for over $32,000. Others, such as the newly released Glace Verte, initially sold for $6,575, though some sold for much more. Other factors, such as its technological innovation, highlighted by its antimagnetic properties, have made this particular Rolex very unique, rare, and valuable. 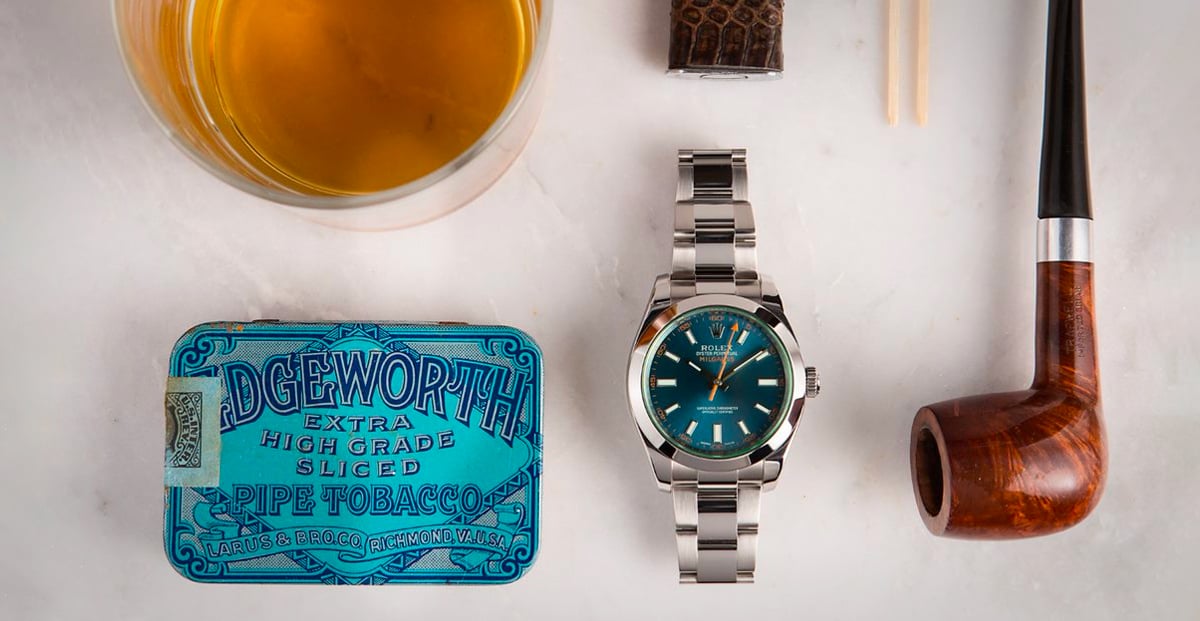