The Yacht-Master was not the first of Rolex’s watches to be designed with sea adventurers in mind. However, rather than focusing on the usability of the watch as a tool, as they did with the Submariner, Rolex seems to have set out to create a tool for boating, while focusing on the luxury and aesthetic look of the watch.

When the Yacht-Master was first introduced in 1992, it seemed to capitalize on the success of Rolex’s first nautical inspired watch, the Submariner. The original Yacht-Master may have been a redesign of the Submariner, though it looks like early Rolex Daytona models. There were many changes, including the size, which was slightly bigger than the Dayton’s 36mm, at 39.5mm. Other changes included an etched bezel insert that was permanently soldered to the bezel, larger hands and maxi-markers, and smooth, rounded edges. 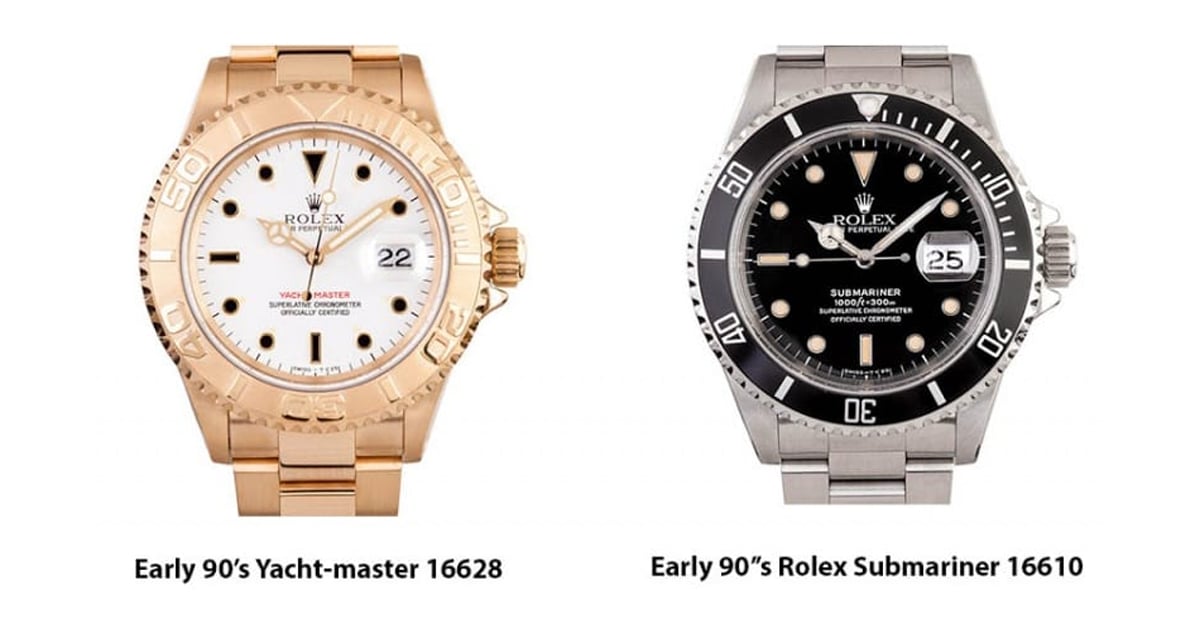 Though it was created in the 1960’s, it was not initially released. Some think that Rolex thought the changes to the Submariner were too drastic, thus created an entirely new model: the Yacht-Master. Rolex originally introduced the new Yacht-Master in 1992 with Reference 16628. As with all Rolex watched, the Yacht-Master focused on strength and durability, thus it had a triple-lock crown and resisted water up to 100 meters (330 feet). While maintaining strength and durability, the watch also features luxurious materials and design, as has come to be expected from Rolex. Made from 18kt gold, the watch is topped with a white dial and is 40mm in size. Inside, the watch features a 3135 movement, which is the same movement used in the Rolex Submariner. With its gold features and impeccable style, the Yacht-Master was initially intended as a more luxurious version of the Submariner. 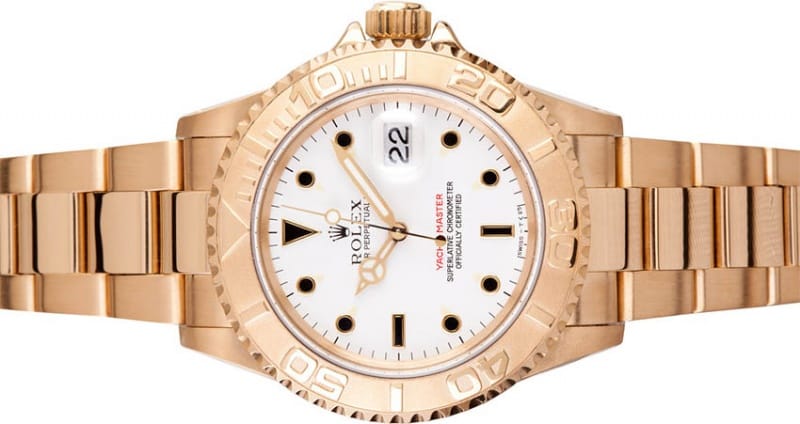 In 1994, Rolex introduced a 35mm mid-sized edition of the Yacht-Master with Reference 69628. This particular reference was geared toward the Asian market, or more specifically for men with smaller wrists. That same year Rolex introduced the women's 29mm version of the Yacht-Master with Reference 69628. Continuing to improve the model, Rolex also issued a new version of the 40mm men’s Yacht-Master in 1994 as well. The 18K gold watch features a beautiful blue sunray dial. Again, in 1999, Rolex improved upon the Yacht-Master design, introduction a stainless steel version of the 40mm at the Basel Fair. This mix of steel and platinum has been termed Rolesium. A unique feature of this reference is its platinum dial. This version was also the first modern Yacht-Master to bring back the timeless maxi-markers and larger hands of the original. The rare and expensive materials, size, and precision design make the Yacht-Master one of Rolex’s most luxurious watches. 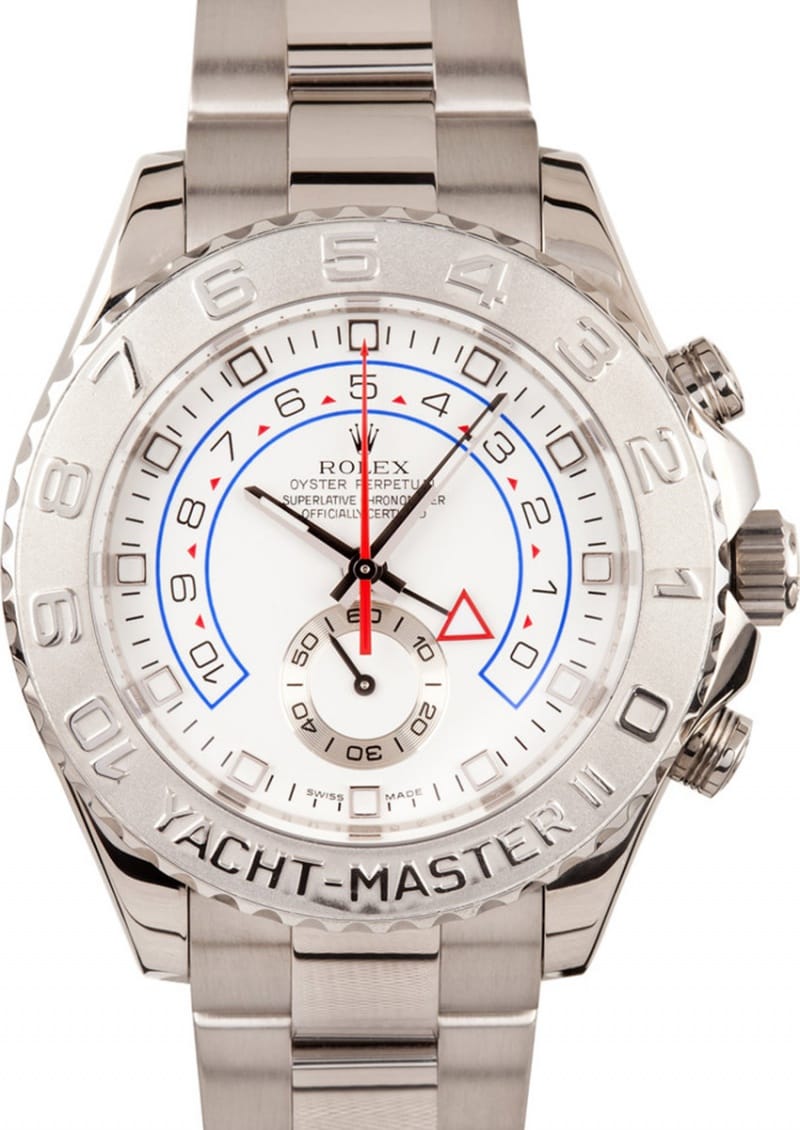 Over the next few years and on into the 2000s, Rolex continued to improve upon the design. Aesthetically, some versions of the Yacht-Master pushed the limits of luxury, adding a beautiful mother of pearl dial, as well as two-tone metal versions, mixing steel and gold. 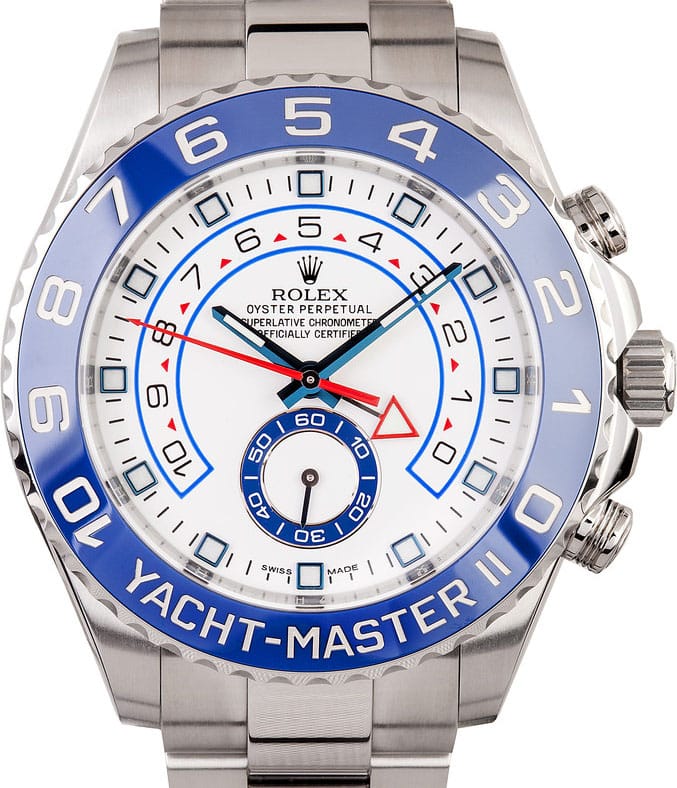 The latest in the Yacht-Master line is Reference 116622. The sleek and sporty Oyster Perpetual Yacht-Master is meant to epitomize the tie between Rolex and sailing. For variety, Rolex offers it in three sizes: 40mm, 35mm and 29mm. The mother-of-pearl blue dials continue to add a beautiful pop of color to the sleek and modern stainless steel and platinum combination. Large hour markers and broad hands, in combination with the raised and polished numerals and graduations which clearly stand out against the contrasting matt of the dial, make the watch easily readable. Made of 18K yellow gold of 950 platinum, the Yacht-Master’s bidirectional rotatable, 60-minute graduated bezel allows the wearer to calculate sailing time.

To ensure safety, especially on the water, Rolex ensures waterproofness in their design up to 300 meters (1,000 feet). Utilizing Rolex’s Triplock winding crown, the watch is specially designed to resist water pressure, as the winding crown screws down against the Oyster case as tightly and completely as an oyster’s shell. First invented by Rolex in 1926, the Oyster case and waterproof features continue to be used to this day. Another safety feature added by Rolex is the Oyster bracelet. As the link between the wearer and the watch, the Oyster bracelet has been designed to not only be aesthetically pleasing and comfortable, but also strong and innovative. Featuring a special clasp designed to prevent accidental opening, the Oyster bracelet is not only aesthetic pleasing but safe and strong, giving the wearer a peace of mind.

Inside, the new Yacht-Master features many important innovations, including the blue Parachrom hairspring. One of the most important components of a watch is its oscillator. Conventional oscillator hairsprings are made of ferromagnetic alloys, leaving them vulnerable to magnetic fields, temperature variations, and shocks (i.e. the watch is dropped), that interfere with their precision. To combat these issues, Rolex created the blue Parachrom hairspring. Finer than a human hair, the Parachrom hairspring is crafted from a highly stable paramagnetic alloy that includes niobium and zirconium. Unaffected by magnetic fields, it is up to 10 times more resistant to shocks. The Yacht-Master is also equipped with caliber 3135, a self-winding mechanical movement entirely developed and manufactured by Rolex and certified as an official Swiss chronometer.

Rarely does Rolex introduce a completely new model. In its long history, one of the last new models to be introduced was the Rolex Daytona, in 1964. 28 years later in 1992, another new model was released carrying the name Yacht-Master. This new design was the second Rolex watch, after the Submariner, to be developed around the Nautical theme. The latest new model, the Sky-Dweller, was introduced in 2012. Thus, historically Rolex makes new references, or versions, of models often, but it seems to take at least 20 years for Rolex to release a completely new model. However, when new models, like the Yacht-Master, are released, it is soon clear that their look, feel, and features were worth the wait.