Bugatti Partners With Jacob & Co. On a New Collection of Hypercar-Worthy Watches

In the space of a few days, French ultra-luxury automaker, Bugatti just announced the end of its longstanding watch partnership with Parmigiani Fleurier and the start of a new one with jeweler-to-the-stars Jacob & Co. Bugatti CEO, Stephan Winkelmann and Jacob & Co. founder Jacob Arabo made the new venture official at Baselworld, along with two limited-edition luxury watches customized from the Jacob & Co. catalog. 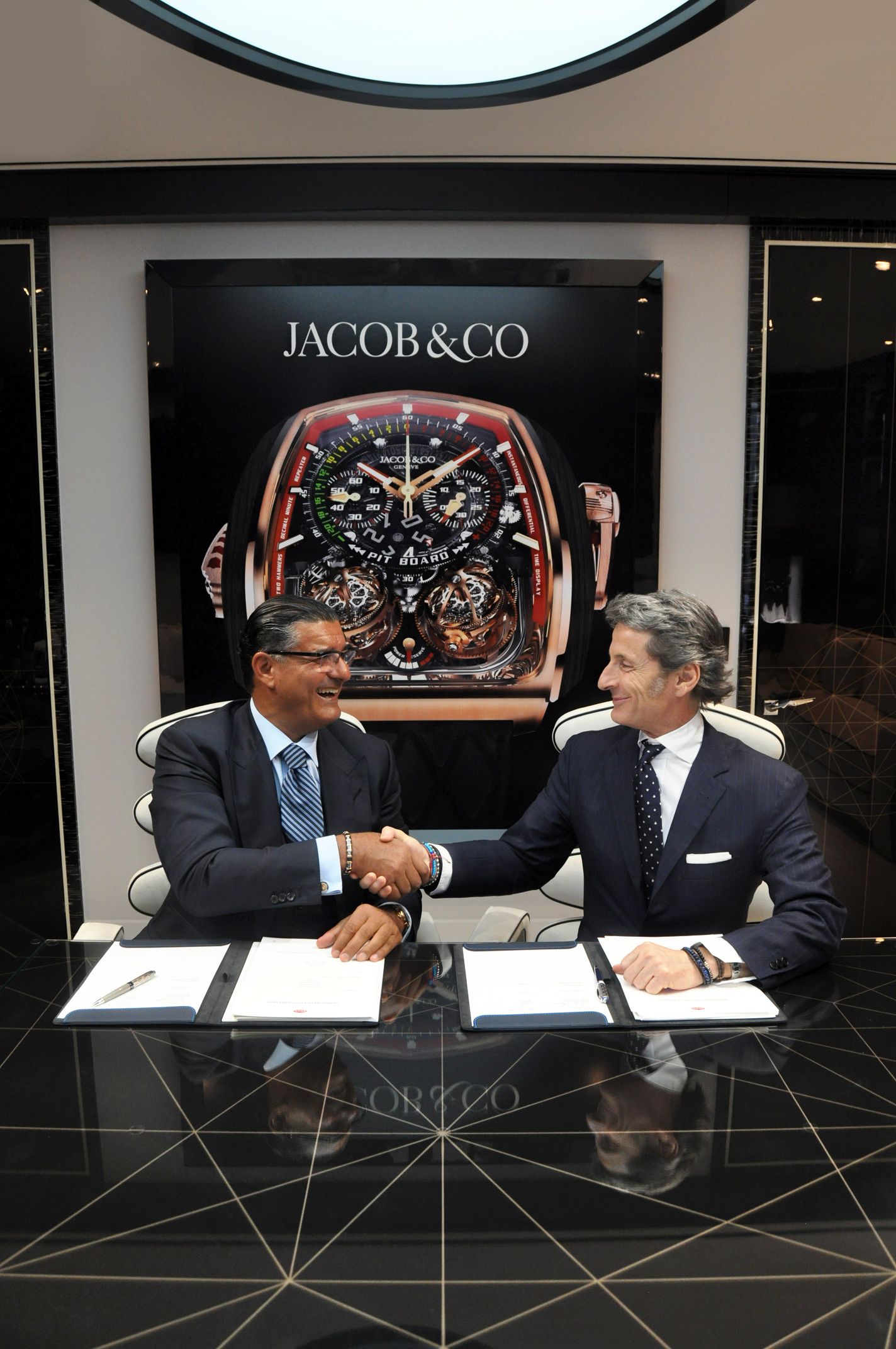 Jacob & Co. and Bugatti announce a new partnership along with a pair of Bugatti Chiron inspired watches (Image: Bugatti).

Founded in New York in 1986, Jacob & Co. is known for over-the-top timepieces, including an $18 million “Billionaire’s Watch,” so it’s a suitably big-ticket partner for a brand making customized cars that cost millions of dollars. The two new watches marking the beginning of the partnership are the Twin Turbo Furious Bugatti Edition, limited to just 39 pieces, and the Bugatti Chrono Edition Limitée 110 Ans, which will be limited to 110 pieces.

Both blacked-out watches take inspiration from Bugatti’s latest production vehicle, the Chiron, which has a base price of about $3 million. The Twin Turbo Furious Bugatti Edition is an evolution of Twin Turbo Furious, Jacob & Co.’s impressive combination of a twin triple-axis tourbillon and a minute repeater which it debuted at Baselworld in 2018. The new version features Bugatti blue highlights as well as a Bugatti logo on the center of the dial, while the power reserve indicator is now marked “Fuel” and bears the colors of the French flag. 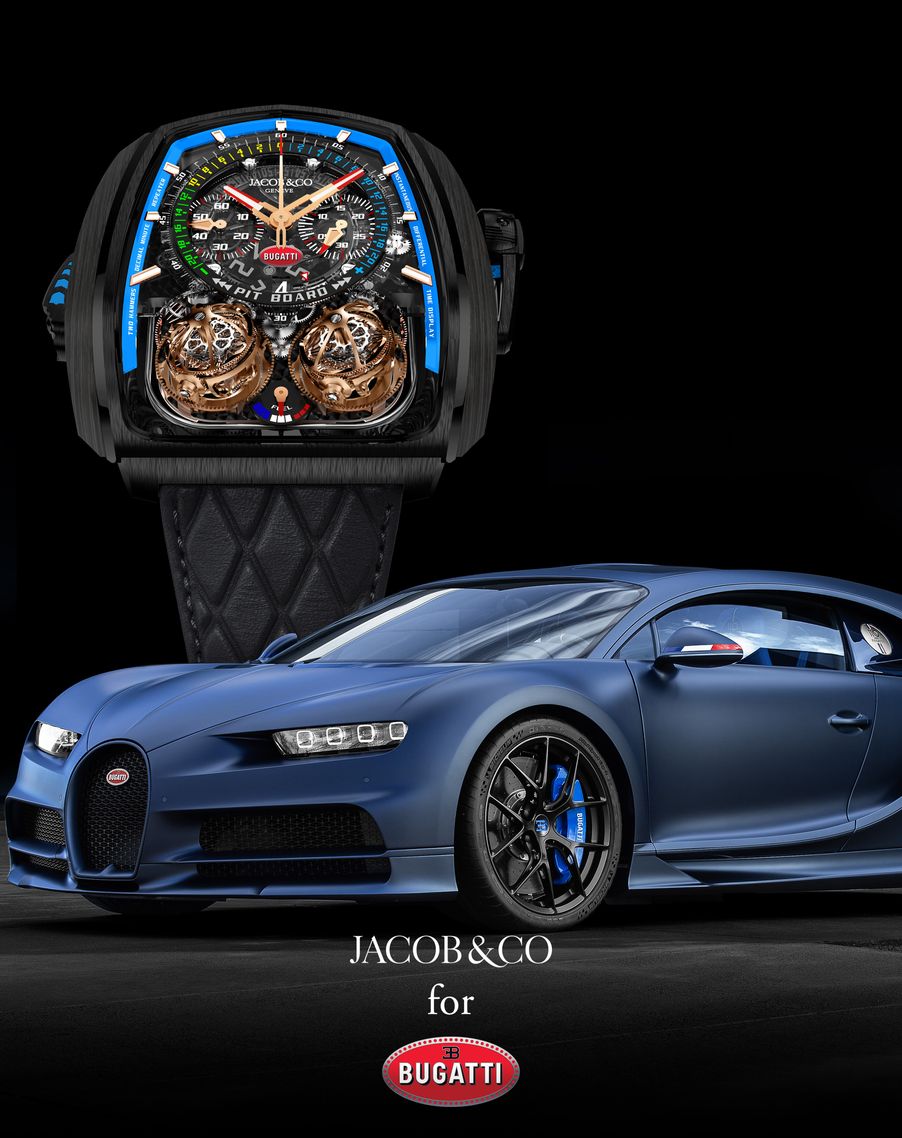 Production of the Twin Turbo Furious Bugatti Edition will be limited to just 39 pieces (Image: Bugatti).

Inspired by the Bugatti Chiron

Of the 39 examples being made, 18 will be executed in carbon fiber, 18 in rose gold, and 3 will be adorned with diamonds. The Bugatti Chrono Edition Limitée 110 Ans meanwhile marks Bugatti’s 110th anniversary dating from its founding in 1909, and is powered by Jacob & Co. JCAA05 skeletonized self-winding chronograph movement.

The chrono’s counters are arranged in a bi-compax format, with the small running seconds on the left and the elapsed minutes counter on the right, with elapsed seconds displayed via the central French Flag Red chronograph seconds hand. In homage to Bugatti, the watch features a special forged carbon case and has a striking racing stripe in the colors of the French flag running vertically across its dial. It comes on a custom rubber strap inspired by the rear bonnet of the Chiron, featuring the iconic EB logo on the buckle.

“For this project we found the right partner in Jacob & Co., because we are both absolutely dedicated to innovation with superb technology, absolute beauty, craftsmanship and the highest quality of the materials,” Winkelmann says. “When I look at a Bugatti Chiron, the perfectly refined engineering is so powerful that sometimes the car appears to be moving even when it is standing still”, Arabo adds. “That’s the same feeling I get when I wear our high complication timepieces: a rush, a sense of energy, movement and power that can barely be contained.” 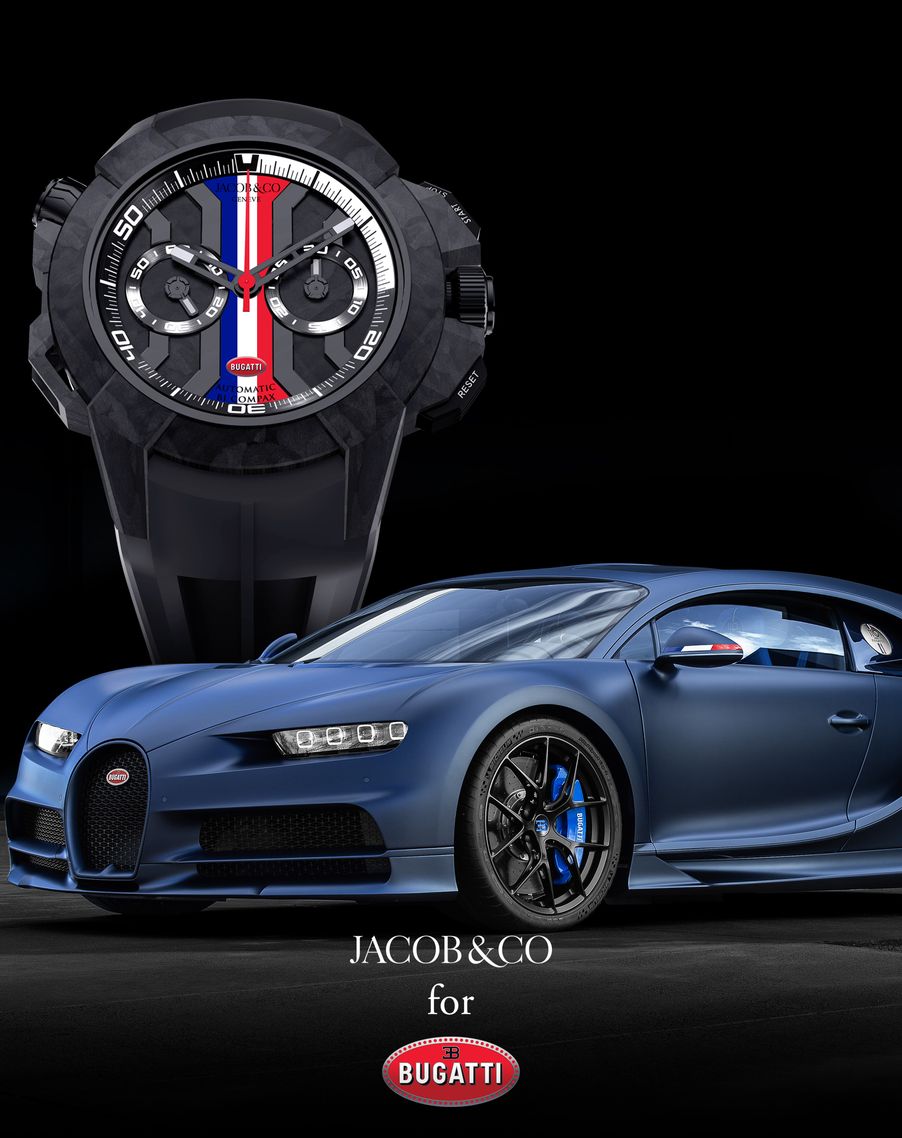 Production of the Bugatti Chrono Edition Limitée 110 Ans will be limited to just 110 pieces (Image: Bugatti).