We are already a decent part of the way through 2021, yet (somehow) we are now just less than 100 days away from the start of the Tokyo 2020 Olympic Games. Originally set to take place last summer, the event was postponed due to COVID-19 (like just about everything else from last year). However, as vaccines continue to roll out, the Tokyo Olympics are back on the calendar and to celebrate the 100-day countdown, the Official Timekeeper of the games has unveiled a new Omega Seamaster that draws its inspiration from the colors of the Tokyo 2020 Olympic Games emblem. 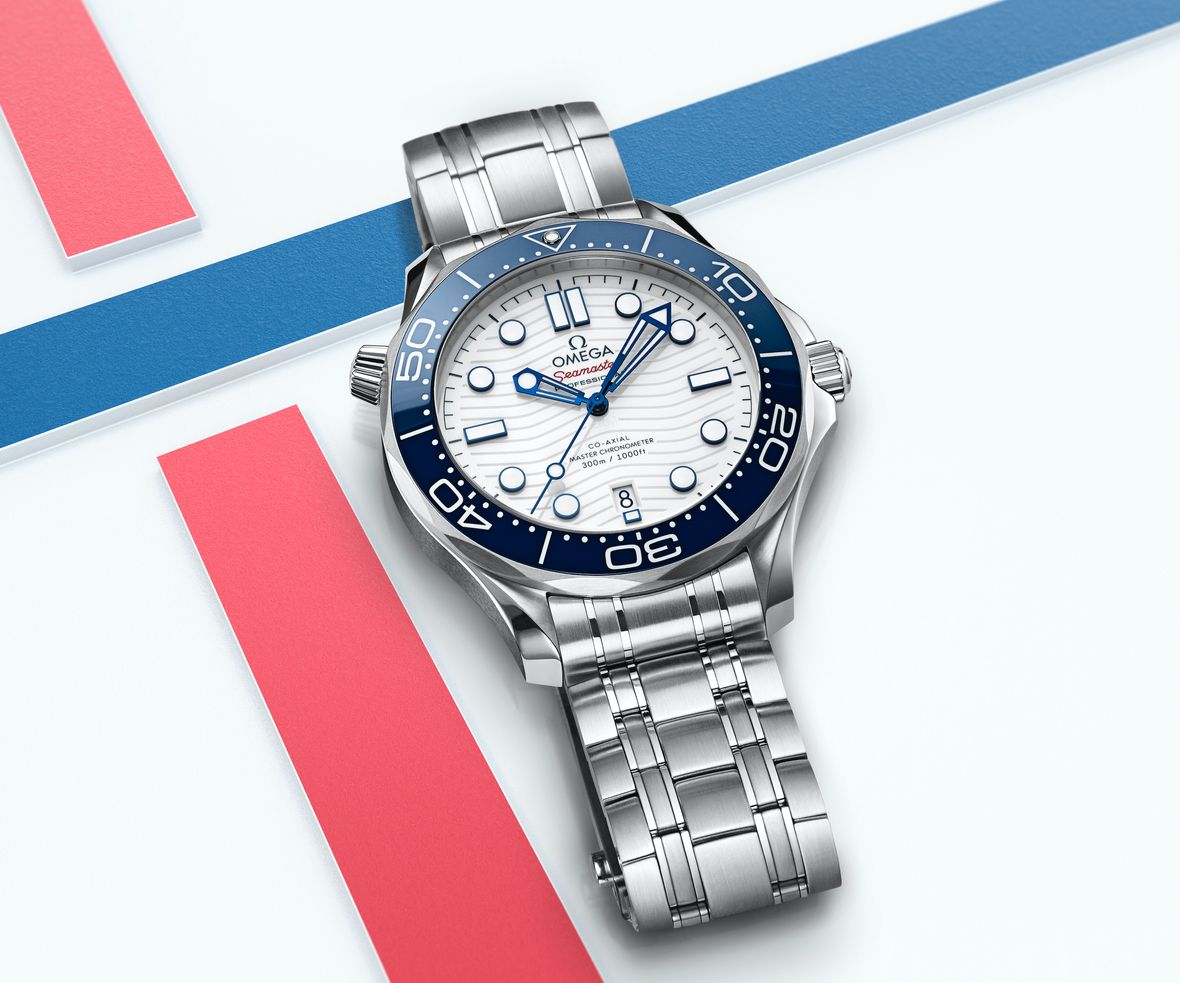 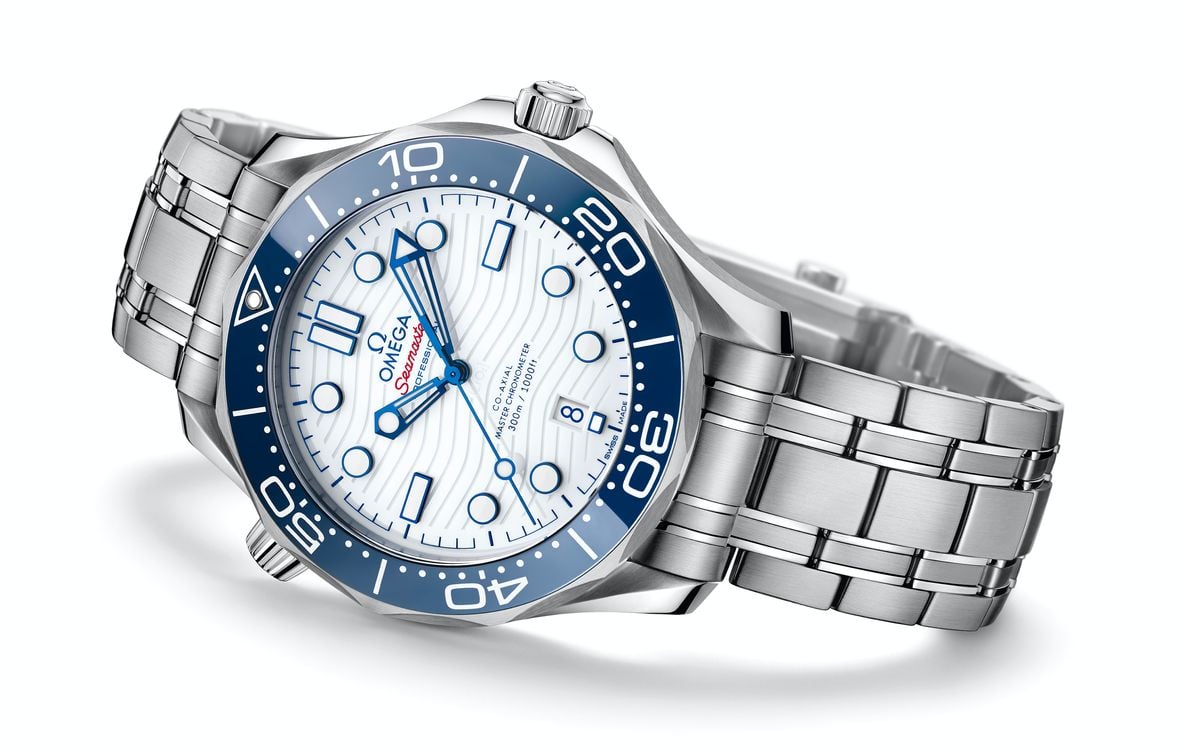 Tokyo 2020 marks the 29th time that Omega has been the Official Timekeeper of the Olympic Games, and the historic Swiss watch manufacturer has a relationship with the event that stretches all the way back to 1932. Over the years, Omega has produced a number of different special-edition watches to celebrate its role as Official Timekeeper, and the new Seamaster Diver 300M Tokyo 2020 Edition is the newest member of a series of Olympics-themed models.

In addition to some special-edition Speedmaster watches that were launched back in 2018 to mark the initial kick-off to the countdown of the Tokyo 2020 Summer Olympic Games, Omega also launched a pair of Seamaster watches in 2019 that were both dedicated to the 2020 Tokyo Olympics. That duo consisted of an Aqua Terra with a blue checkered dial that was inspired by the logo of the 2020 Olympic Games and a Planet Ocean with a white dial and bezel accented with red that drew its inspiration from the flag of Japan (the hosting country).

Like 2019’s releases, this new watch is also a Seamaster; however, it is one of the Diver 300M models, rather than one of the other sub-collections that make up the greater Seamaster lineup. Most frequently, the Seamaster Diver 300M range is known for its associations with the James Bond film franchise, but it also occasionally serves as the platform for various special-edition timepieces, such as the America’s Cup edition of the chronograph model that was released just earlier this year. 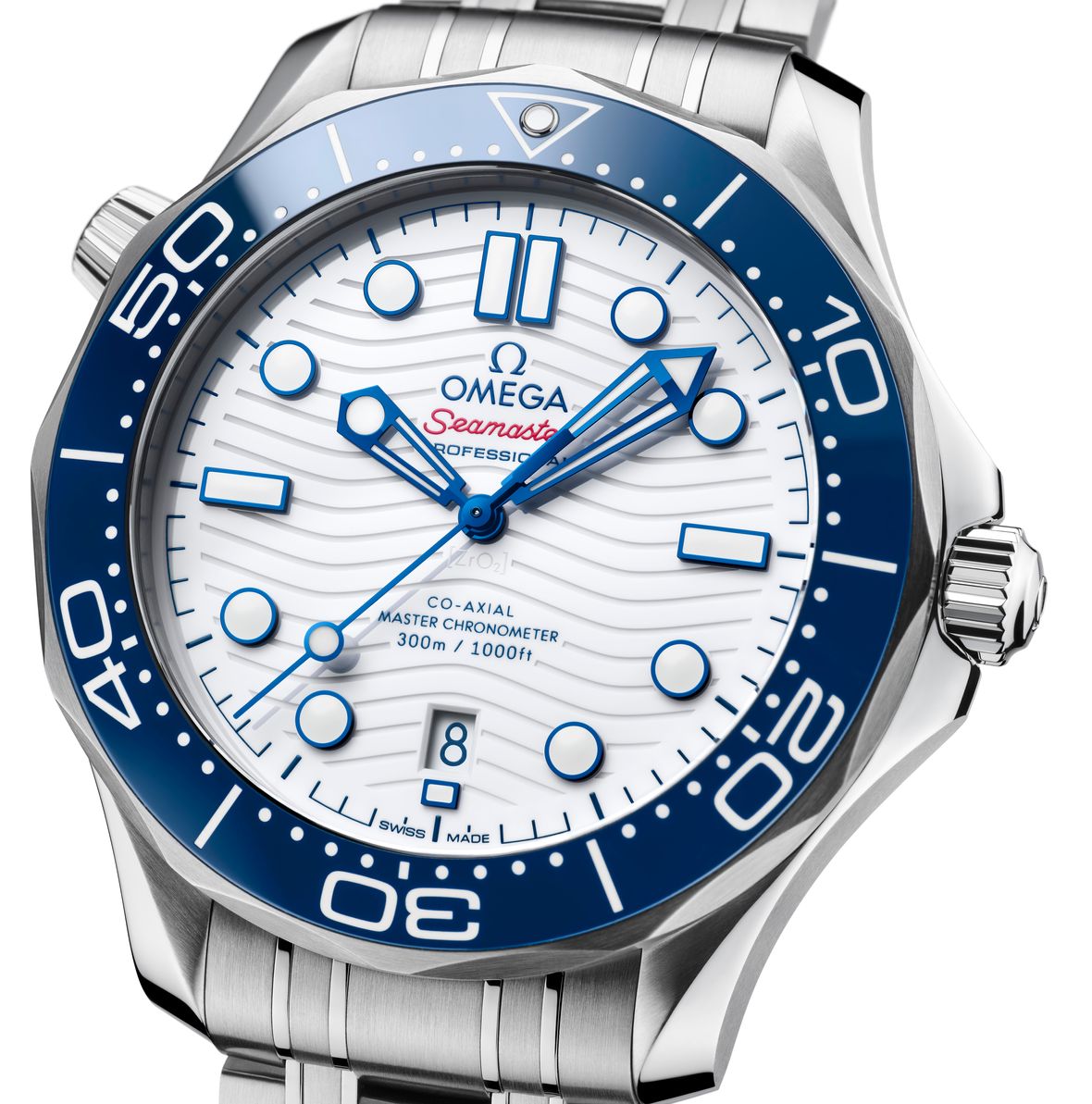 Inspired by the Colors of the Tokyo 2020 Olympic Games Emblem

Unlike the commemorative Aqua Terra model from 2019, which drew inspiration for its dial from the actual design of the Tokyo 2020 Olympics emblem, the new Omega Seamaster Diver 300M Tokyo 2020 Edition is inspired by just the colors of the emblem. In many instances, commemorative-edition watches receive criticism for being too on-the-nose in terms of their aesthetics. Rather than simply alluding to their intended theme or design inspiration, they often include obvious logos, bright colors, and various features that all too often come off as forced and contrived rather than organic and thoughtfully integrated.

However, by taking its design cues from just the colors of the 2020 Olympic Games emblem, the new Omega Seamaster Diver 300M Tokyo 2020 Edition does not come off as an obvious attempt at being a commemorative watch. In fact, when just looking at the dial side of it, there is no indication that the new model is a special Olympics edition whatsoever, as it lacks any form of additional logos or branding that are typically found on commemorative-edition timepieces. Instead, the new Seamaster Diver 300M Tokyo 2020 Edition simply presents itself as a special rendition of a classic and successful core model from Omega’s catalog, rather than one that screams about its intended design inspiration. 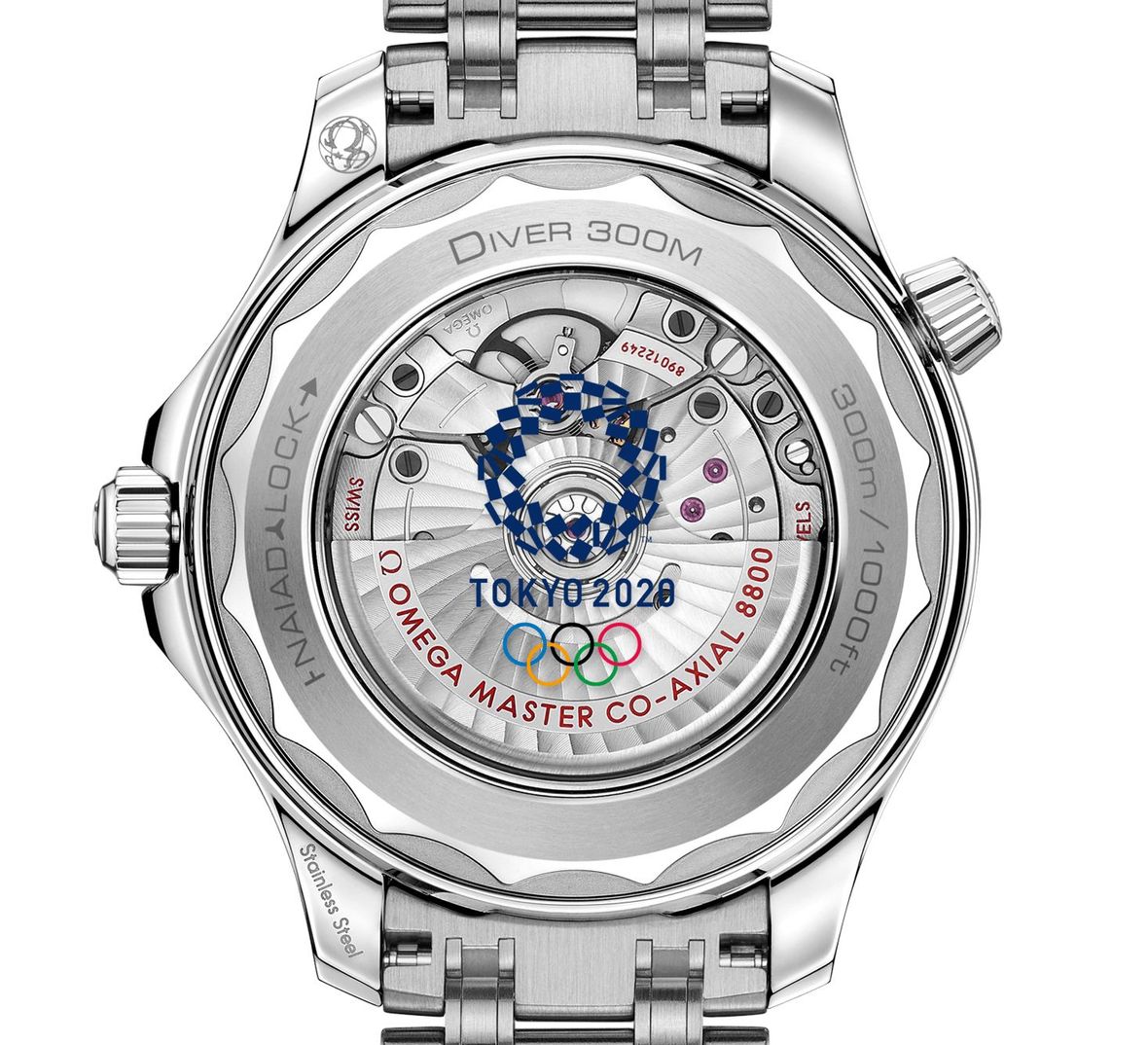 A Classic Omega Seamaster Diver 300M for the 2020 Tokyo Olympics

At a glance, the new Omega Seamaster Diver 300M Tokyo 2020 Edition looks very similar to the standard white dial model from the current Diver 300M lineup. However, while the standard white dial version features a black ceramic bezel and matching black accents, the new Tokyo 2020 edition features these same details in blue. Both versions include white ceramic dials with the collection’s signature laser-engraved wave pattern, and both even feature the “Seamaster” name in red letters.

Like the other time-and-date models from the standard Seamaster Diver 300M range, the new Tokyo 2020 edition is powered by Omega’s Co-Axial Caliber 8800 movement, which features the brand’s ‘Master Chronometer’ designation and has been officially certified by the Swiss Federal Institute of Metrology (METAS). While the standard models feature unadorned sapphire display case-backs, the new Omega Seamaster Diver 300M Tokyo 2020 Edition includes a transferred Tokyo 2020 Olympic Games emblem, which serves as the watch’s only obvious Olympics-branded design element.

As a whole, the new Tokyo 2020 edition is very much the same Seamaster Diver 300M that we all know and love – which is an excellent thing since the current generation of the watch is absolutely fantastic. The new Omega Seamaster Diver 300M Tokyo 2020 Edition reference 522.30.42.20.04.001 has an official retail price of $5,600 USD and although production will not be limited to a specific number, this new model is a special release and will not be a permanent addition to the brand’s catalog. Each of the new Omega Seamaster Diver 300M Tokyo 2020 Edition watches comes fitted on a 5-link stainless steel bracelet and will come with a special commemorative Olympics Games presentation box.

* All images courtesy of OMEGA. 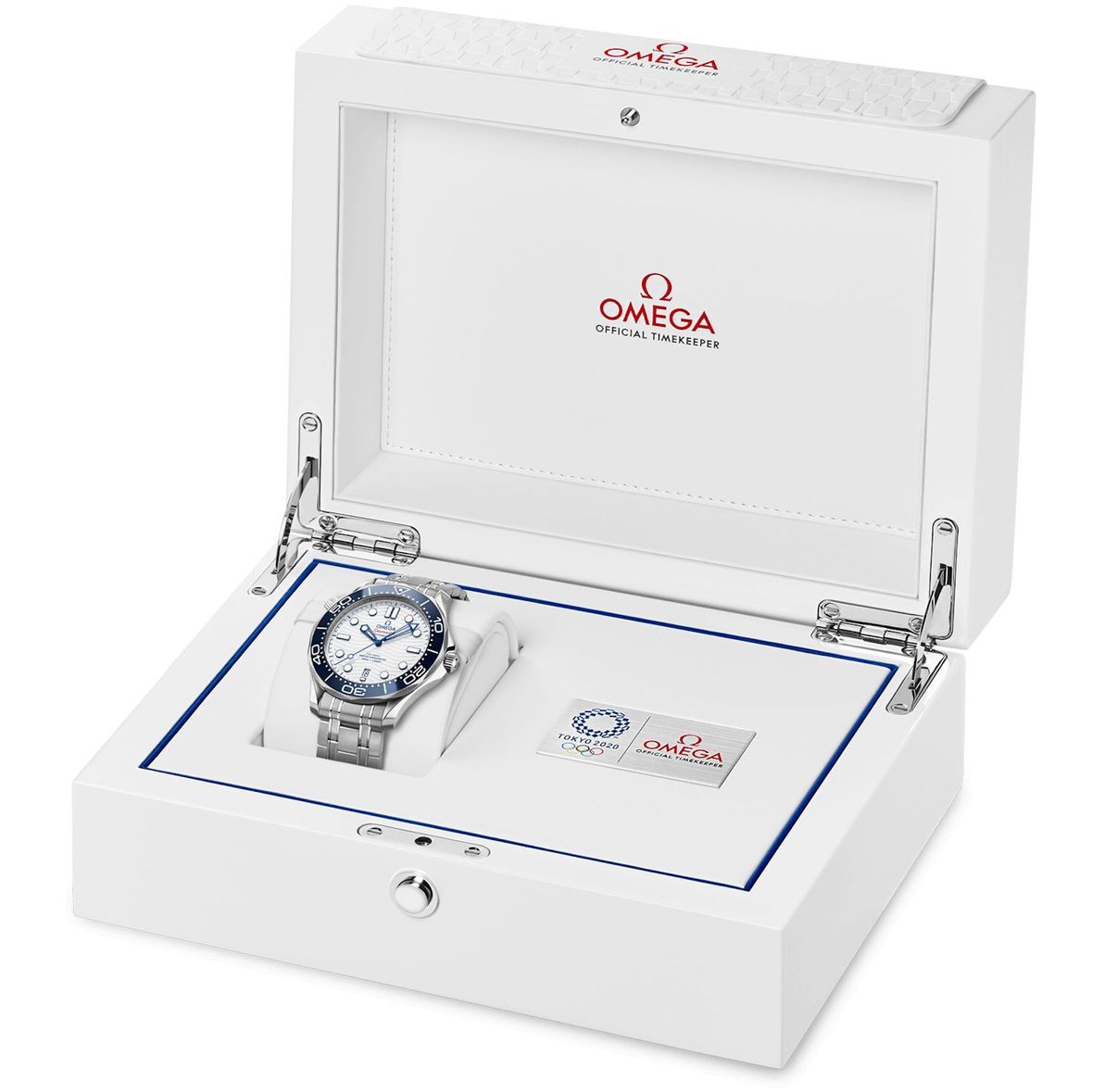