The king of precious metals has not had it easy over the last decade or two. A victim of its own success, yellow gold’s image has taken some major tarnishing in recent years through its association with a number of assorted groups with far more money than restraint. From the heavy jewelry dripping from gangsters and wannabes, to the gauche watches and tasteless accessories sported by everyone from Gordon Gekko, Patrick Bateman and the worst of the Wall Street yuppies, to the Rich Kids of Instagram and various nefarious oligarchs, yellow gold luxury watches started to seem like the metal that subtlety forgot. 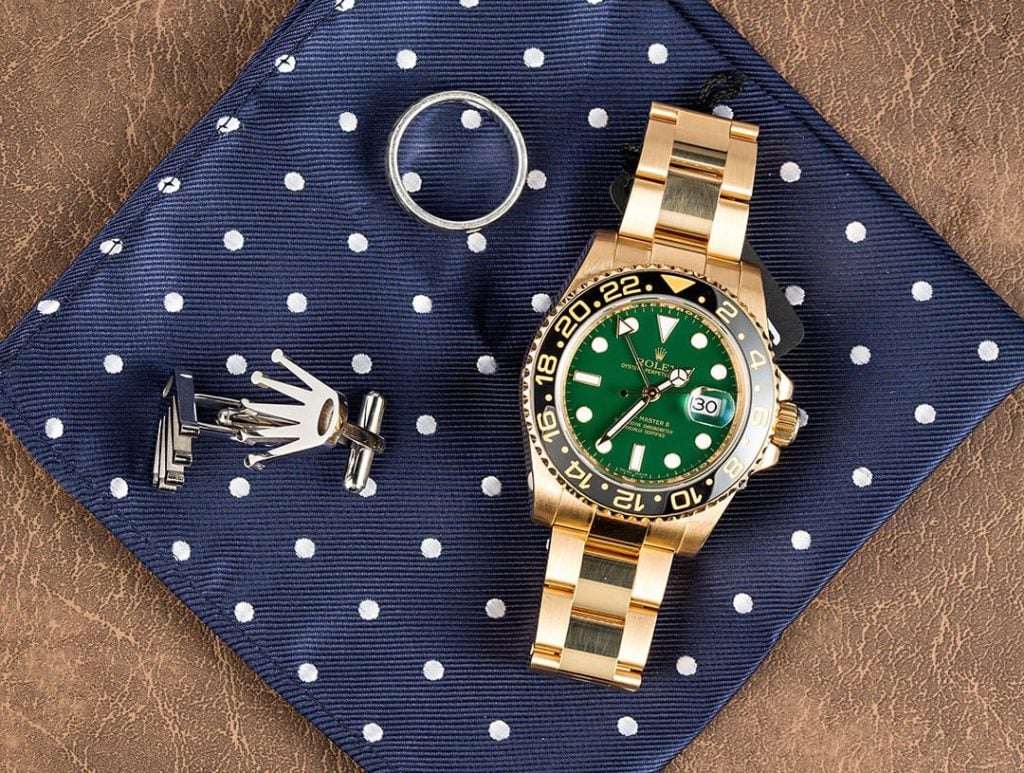 Much like Clark Gable obliterating the undershirt market in 1934 when he appeared bare-chested in It Happened One Night, style experts sometimes point to a scene in Martin Scorsese’s Casino as signaling the death knell for yellow gold.

We see the debatable characters played by De Niro and Sharon Stone lounging on a bed in a Las Vegas penthouse, surrounded by seemingly acres of the heftiest, and yellowest, gold jewelry, with the moll trying on ever more bangles and rings until she can barely lift her arms. It is the epitome of pure 80s excess; all show, no substance. 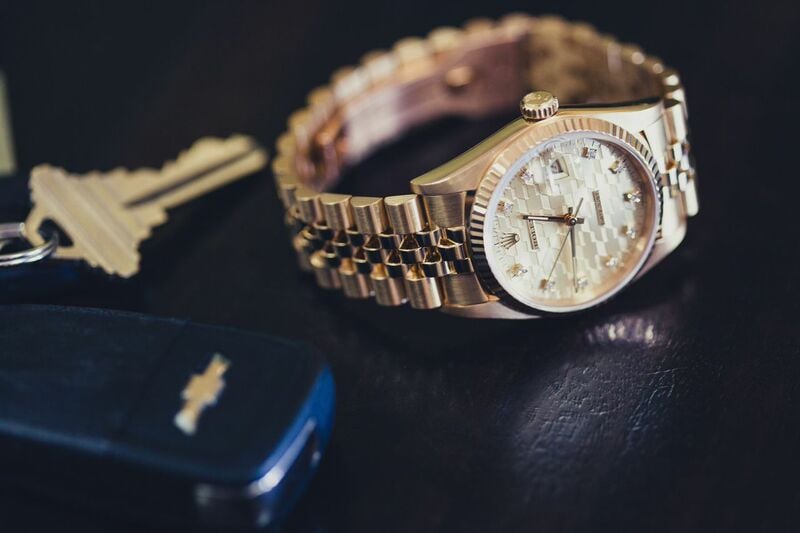 However, in the last year or so, the cyclical nature of fashion trends has come into effect. We have started to see yellow gold being used more and more in jewelry and watch designs, replacing the cooler shades of white gold which seems to have had the market almost to itself for years now.

Crucially, it is also attracting a younger audience. Increasing numbers of people in their twenties are choosing yellow gold for wedding bands; a new generation emulating the look of their parents’ rings when they come to get married.

It is all part of the current popularity of vintage design. In the 1930s and 40s, the vast majority of jewelry was yellow gold, at least in color. That sort of classic styling has become incredibly sought-after recently, and the warm tones are a welcome relief from the coldness of the white metals, either gold or platinum. 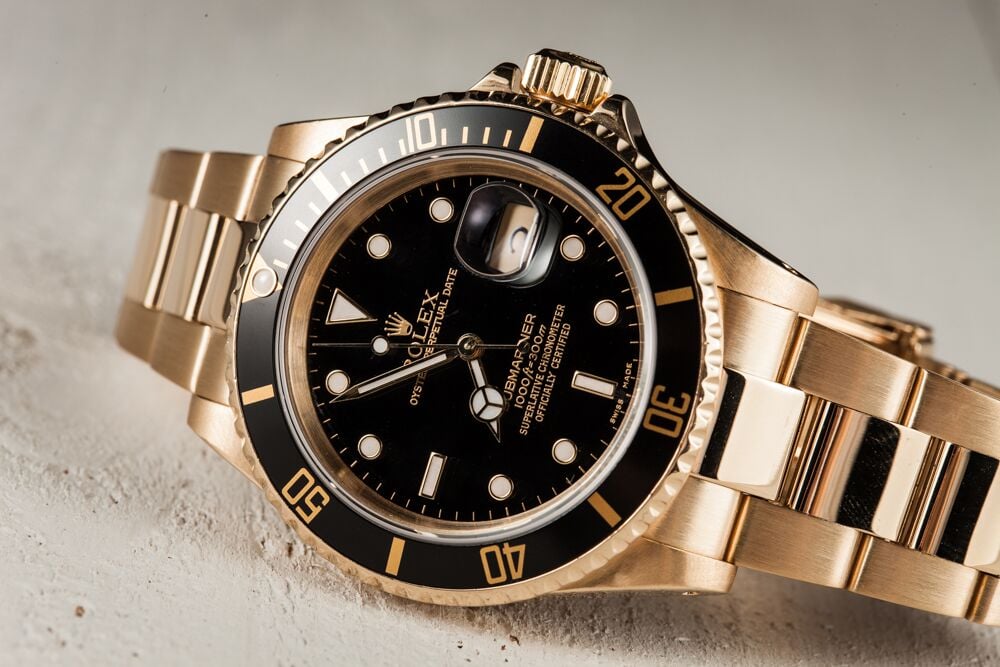 The resurgence of yellow gold probably shouldn’t take anyone by surprise. It is, after all, the oldest of the precious metals—its use as a decorative item dating back, ironically, to the Bronze Age. The earliest documented example of yellow gold jewelry in Europe, for instance, is more than 6,600 years old.

Over those millennia, its popularity has ebbed and flowed, but it has always been here and always will be.

Along with its ancient aesthetic appeal, yellow gold also has a couple of other benefits.

It is the metal in its purest form, and as such is more hypoallergenic. To achieve the different tones of white or rose gold, the base metal has to be mixed with others, nickel or copper for instance, both of which can irritate the skin in some people.

Compared to other colors, yellow gold is also easier to clean. And especially now, and particularly with watches, it is generally lower priced than other precious metals.

With vintage timepieces, a model’s worth is based more on the demand for it rather than the market value of the metal it’s made from. The beating its reputation has taken in recent years means you will often find examples of classic watches in yellow gold cheaper than even their steel equivalents. How long that situation will last though isn’t clear. 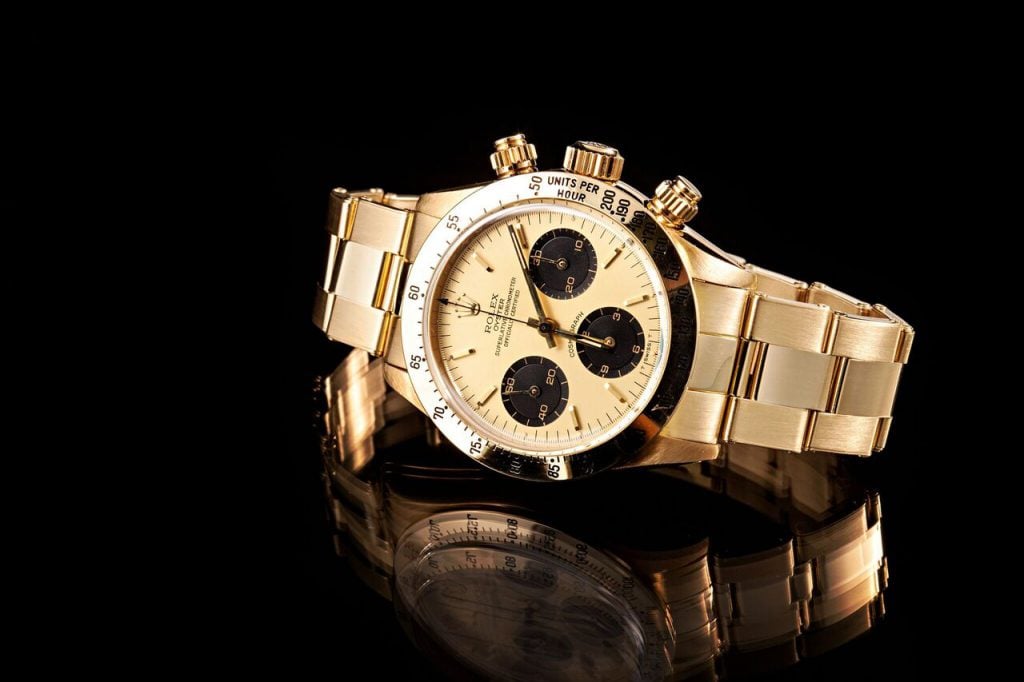 Proof about yellow gold’s tentative first steps back into the limelight seemed to be made at this year’s Baselworld, when several high end houses unveiled creations glowing to a greater or lesser degree.

But whether you want to go the brand new route or prefer your wrist attire on the vintage side, below I’ve picked out a few models that are definitely worth a look. 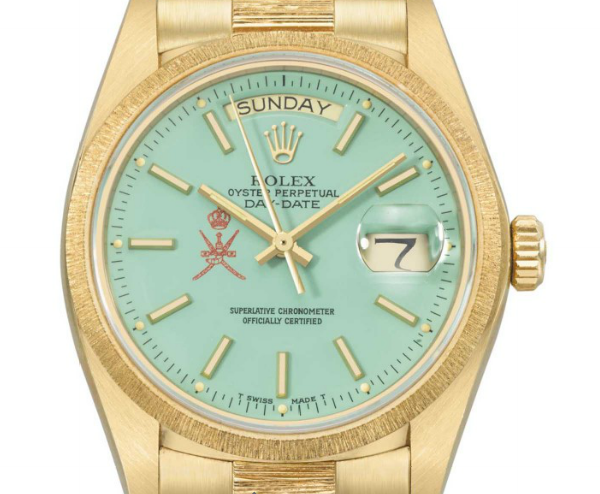 A very special Yellow Gold Day-Date with the Saudi dial

Really the only place to start when we talk about yellow gold timepieces, Rolex’s President has long set the standard for discreet status symbol.

At the top of the crown’s tree since its launch in the 1950s, it has been worn by some of history’s most famous and notorious characters.

It is the brand flagship and as such has only ever been cast in precious metals, but while the overall design has barely altered during its 60+ years in production, the character of its yellow gold has.

Hold up a classic model from the Day-Date’s earliest iterations next to one fresh out of the box today, and you will see the modern version has a paler quality to its tone. The vintage pieces are richer in color, and both reflect the trends of their respective times.

But the major discrepancy between old and young is reflected in price. While a new example in yellow gold will set you back somewhere north of $30,000, there are plenty of examples on the pre-owned market right now for far less than $10,000. 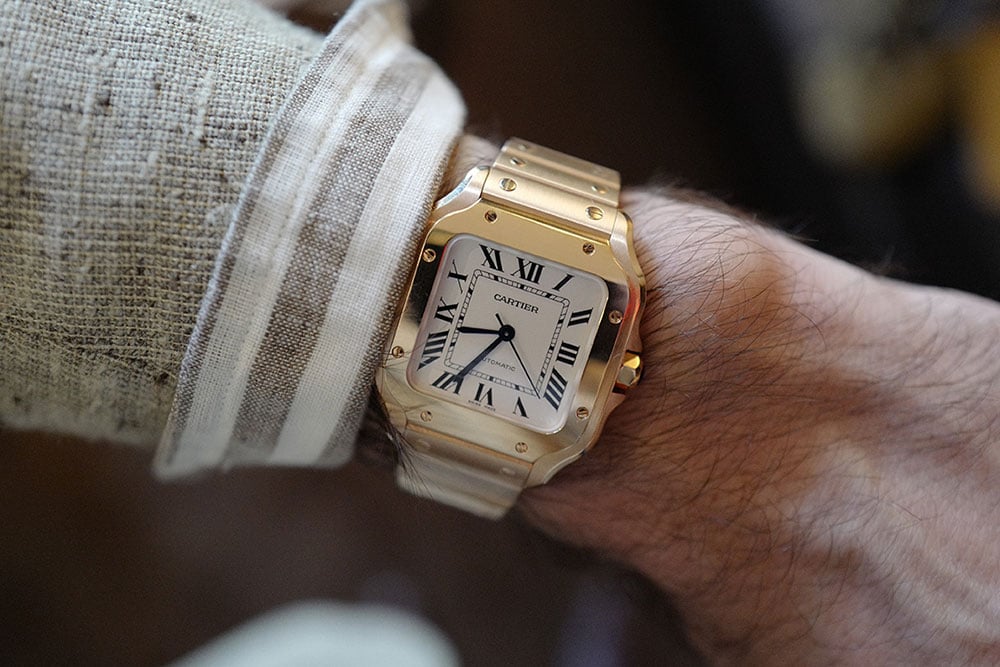 The world’s first pilot’s watch, and one of horology’s landmark creations whatever metal it’s cast in, the Cartier Santos dates back to 1904.

In production ever since, this year’s Basel event saw the release of a slew of new models, in two different sizes, all unmistakably taking their DNA from that early original.

So alongside the pink gold and two-tone versions is an all yellow gold beauty; the ideal color for such a longstanding classic.

Available with a matching metal bracelet or a fine leather strap, it is a watch that can either shout or whisper to great effect.

But whether a vintage piece or one of the newest variations, the Cartier Santos is a milestone addition to any collector’s wish list. 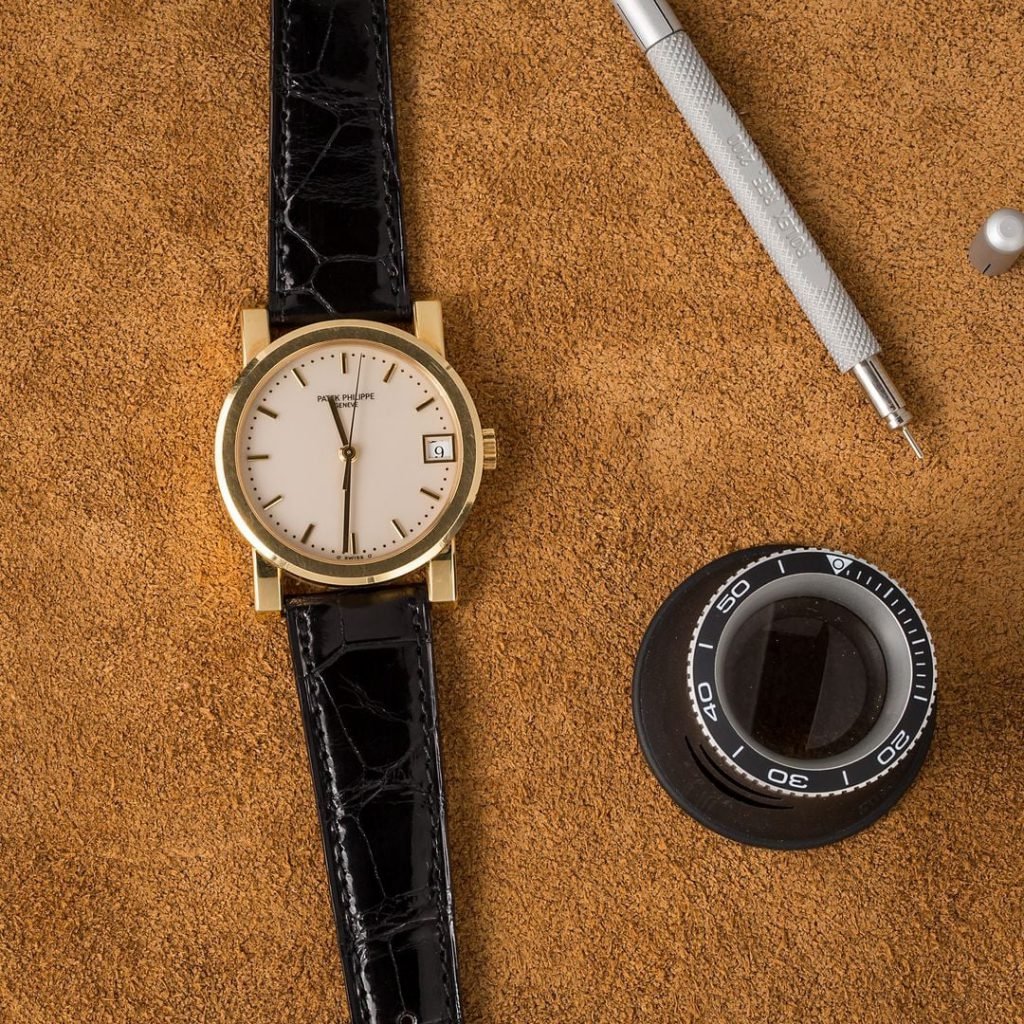 Proof that yellow gold can still be the embodiment of elegant understatement when needs be, the three dozen or so references of the Calatrava remain the dress watch of all dress watches and the undisputed signature piece of Patek Philippe.

First released in 1932 and influenced from the outset by the ‘form follows function’ principles of the German Bauhaus movement, the Calatrava is distinguished by its sleek lines and simple purity.

Just as across the Rhône in Geneva, that other flagship creation from Rolex has barely changed during its history of production, similarly the Calatrava’s styling has endured virtually untouched for the last 80-odd years.

As a brand, Patek is renowned for the impeccable engineering that goes into its highly complicated offerings—this being the watchmaker that introduced the minute repeater and perpetual calendar, so it is a testament to the Calatrava’s timeless design that it still enjoys the reputation it does today.

Although its looks are minimalist in the extreme, the level of craftsmanship present lift the watch to the level of horological royalty.

Personified by a bezel either polished to an impossible shine or else decorated with the hobnail ‘Clous de Paris’ detailing, there isn’t a wrist that won’t be made more sophisticated, well-dressed and tasteful with the addition of the Calatrava.