The Omega Constellation is one of the oldest lines of watches, perfectly encapsulating the manufacturer’s dedication to precision and timeless design. Today, the Constellation collection represents one of the cornerstone offerings of Omega’s catalog and it spans a wide range of both men’s and women’s timepieces, as well as different sizes, materials, straps, movements, and configurations.

In this guide, we’re going to outline everything that you need to know about the history and evolution of the Omega Constellation. Like the rest of the brand’s collections, the Constellation range is vast and incredibly diverse. Understanding the Constellation’s history is a major part of appreciating its current models and being able to find the one that is right for you. So, let’s take a closer look, shall we?

– One of Omega’s oldest collections, first launched in 1952.

– Emblematic of chronometry and timekeeping precision.

– Features the Observatory of Geneva on the caseback.

– Famous for its vintage pie-pan dials and bezels with claws (“Griffes”).

– Known for its wide variety of designs, materials, and sizes. 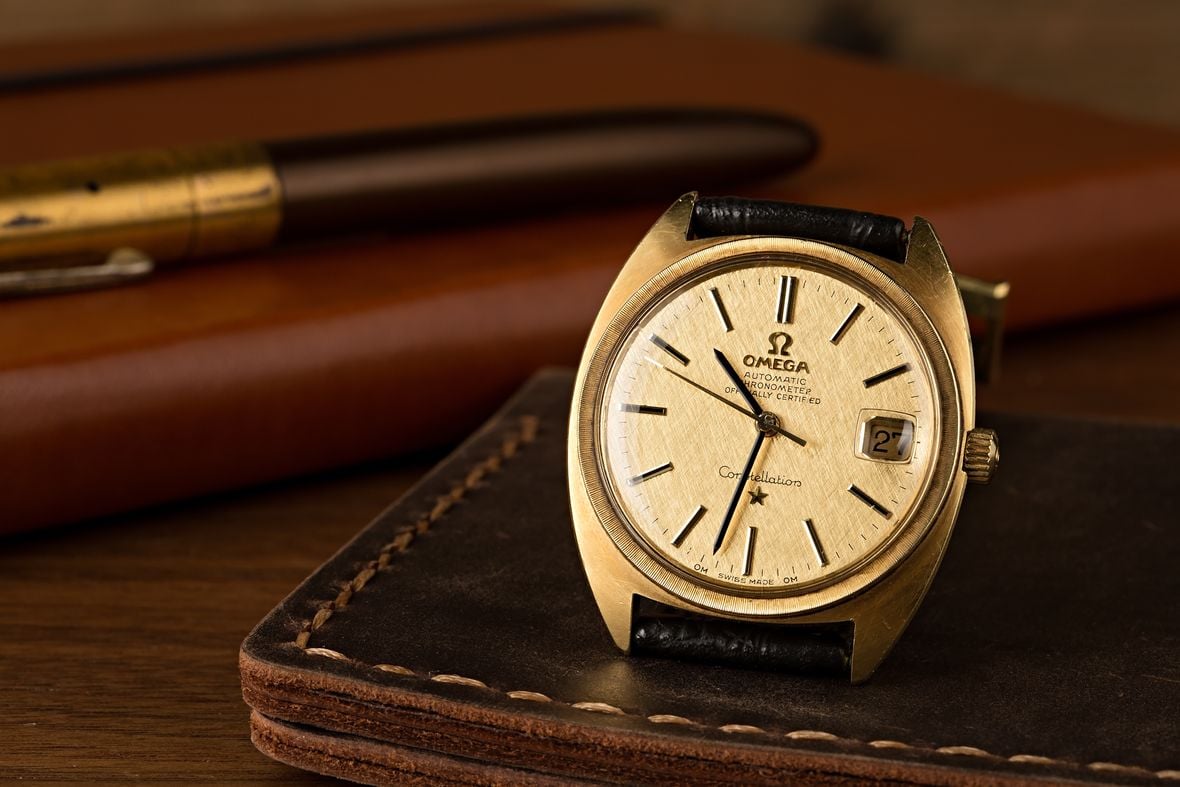 It should also be noted that there was a brief time in this watch’s history (from about 1952-1956) that the Constellation was known as the ‘Globemaster’ in the United States. However, Omega had to quickly drop the name due to copyright issues with Douglas Aircraft, who manufactured huge transport planes with the same name at the time. With that in mind, the Globemaster name would make an appearance within the Constellation collection nearly fifty years later in 2015 (but more on that later).

The vast majority of the Omega Constellation watches from the early 1950s and 1960s followed the same design language and featured the now-iconic pie-pan dials, diamond-shaped hour markers, and a 10-sided winding crown. However, by the mid-1960s the “Connie” (as some collectors lovingly call it) started to transform.

The winding crown took on a new round and fluted design, flat dials replaced pie pan dials, and the collection was also introduced to new features like gold and onyx stick hour markers and the “C-Shape” case. By 1969, Omega was even producing the Constellation with an integrated bracelet, making it one of the first watches in the world to be equipped with a bracelet truly integrated with the case. It’s also important to note that by this point in time, Omega was also producing both his and hers Constellation watches. 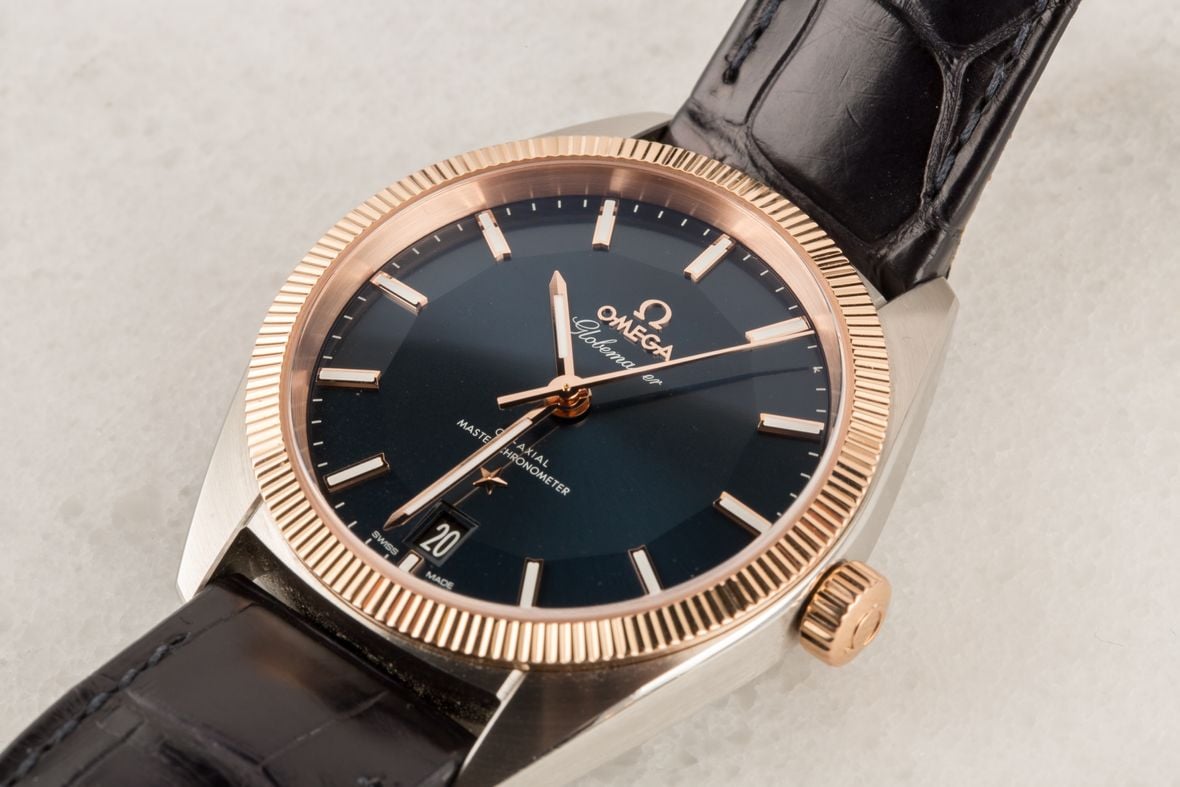 The Constellation’s early ‘glory days’ are generally considered over by the 1970s. This was the first time Omega stopped using mechanical chronometer movements and switched to quartz. This was a volatile time for the traditional Swiss watch market. Quartz movements made watches much cheaper and more accessible, bankrupting many brands and resulting in the consolidations of many highly-regarded and historic firms.

However, Omega was quick on its feet with the Constellation, getting ahead of the rest of the Swiss market by introducing three quartz Constellation watches in 1970. Throughout the decade, Omega would continue on its quartz crusade, even creating a handful of notable standouts like the Constellation Marine Stardust.

In 1982, Omega’s flagship line was reinvented, breathing new life into the brand and the Constellation collection as a whole. That year, designer Carol Didisheim created the Omega Constellation Manhattan model with a distinct bezel that featured four claws (known as “Griffes”), an integrated bracelet, and a chronometer-rated movement. Today, much of the design DNA that defines the Constellation range is based on the original ‘Manhattan’ model. 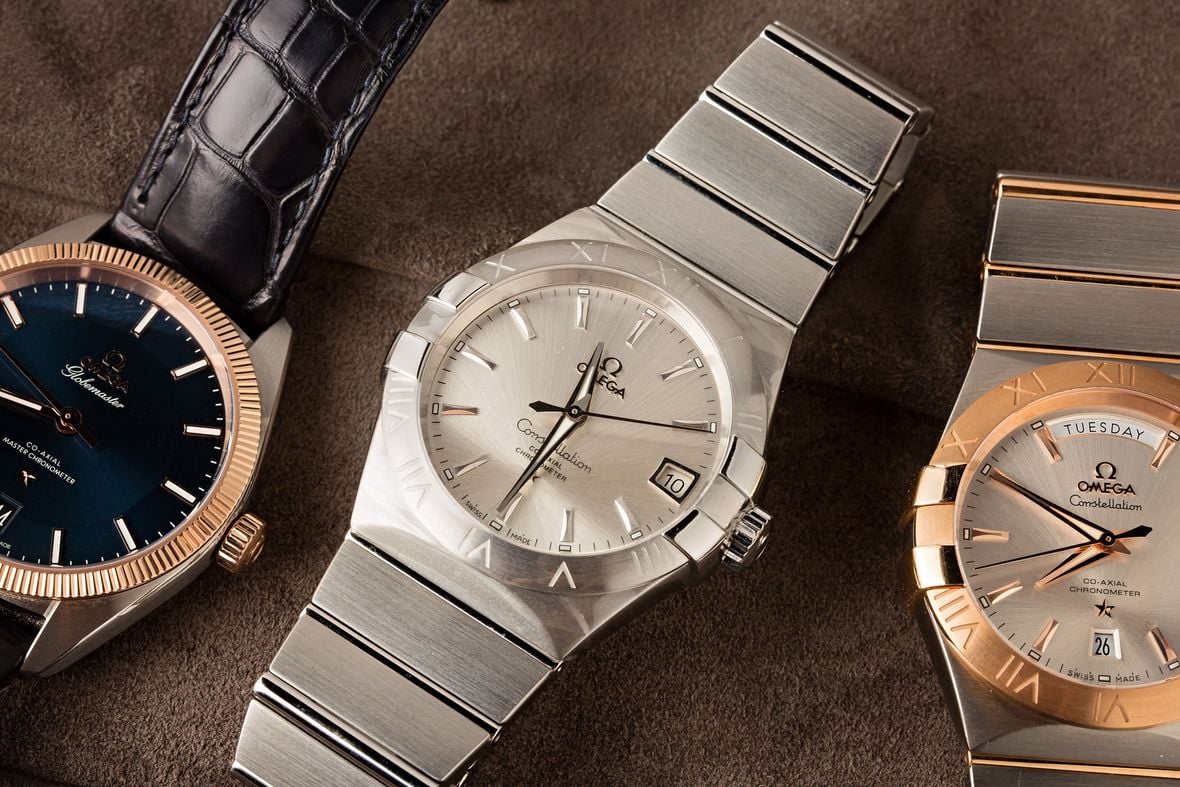 During the 2000s, Omega continued to update its movements, introducing the much larger Double Eagle model with a chronometer-certified caliber fitted with a Co-Axial escapement. A COSC-rated quartz equivalent and even a mechanical chronograph version were also added to the lineup, but the biggest and most impressive changes to the Constellation line didn’t come for another decade.

In 2015, Omega revived the Globemaster name with the Constellation Globemaster that introduced its new and more stringent Master Chronometer certification. This goes a step further than COSC certification, replicating everyday wear and tear to ensure that the watch is resistant to water and magnetic fields. Eventually, Omega got the copyrights to the Globemaster name, bringing it back in the form of a range of models that draw their design inspiration from the vintage Constellation watches from the 1950s and 1960s, complete with features like fluted bezels and pie-pan dials. 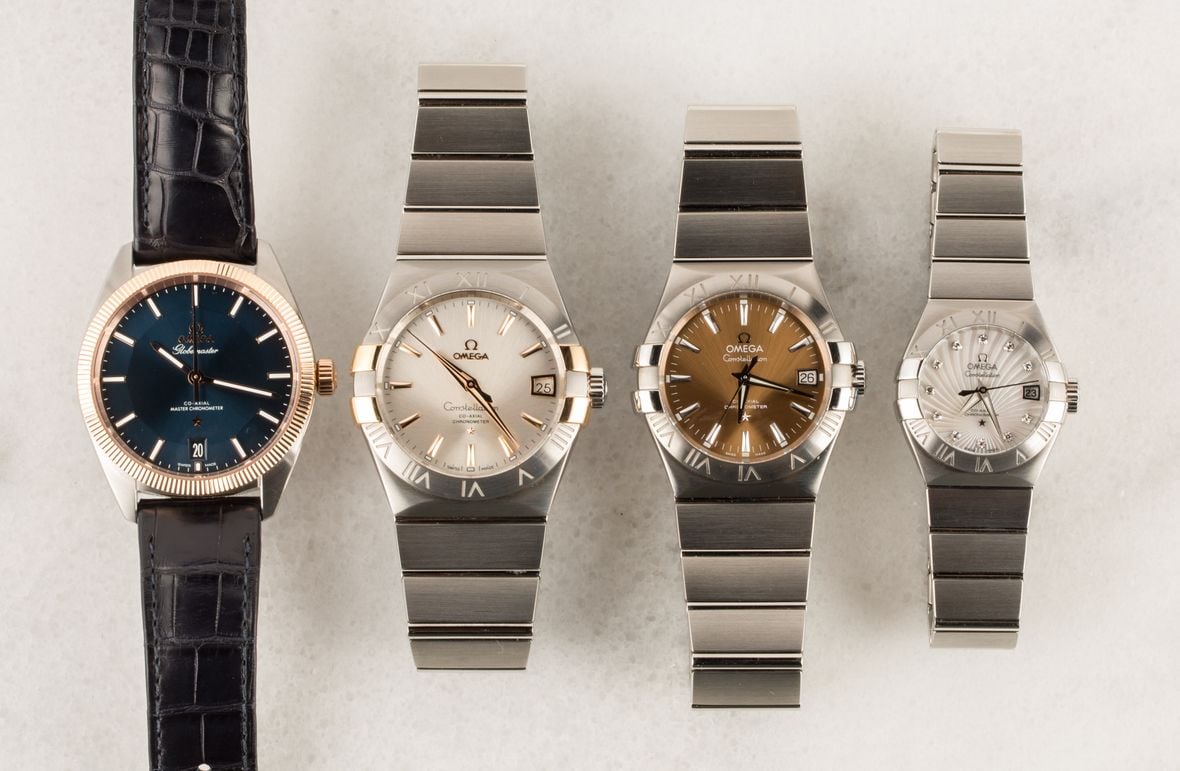 A few years later in 2018, the Omega Constellation options for women were expanded with a slew of new models featuring a repositioned date window, thinner lugs, polished bevels, and more stylized hands. This new collection also featured a slew of new dial variations and like the men’s models, there’s both the Globemaster and the traditional ‘Manhattan’ inspired Constellation watches.

Regardless of the specific Constellation model, you will find that there is a picture of the Geneva Observatory engraved on the back of its case, sitting under a sky with an arrangement of eight stars. Each star represents the awards won by Omega in the world chronometer competition.

The vintage Omega Constellation cases are really varied. You have the earliest versions with these soft lines, inward-curved lugs, and that 10-sided winding crown or the round, fluted winding crown. There were also the broader cases of the late 1960s that ultimately gave way to fully-integrated bracelets. In terms of materials, you have the options of stainless steel models, alongside two-tone versions, solid gold references, and even ultra-rare platinum editions.

There are also unusual and rectangular-shaped cases like the Constellation Marine Stardust and the Carre, along with the famous Manhattan case that now forms the backbone of the entire Omega Constellation lineup. While the claws on top of the Constellation’s bezel are now purely ornamental, they are both aesthetically pleasing and one of the hallmark traits of this iconic line of Omega watches. 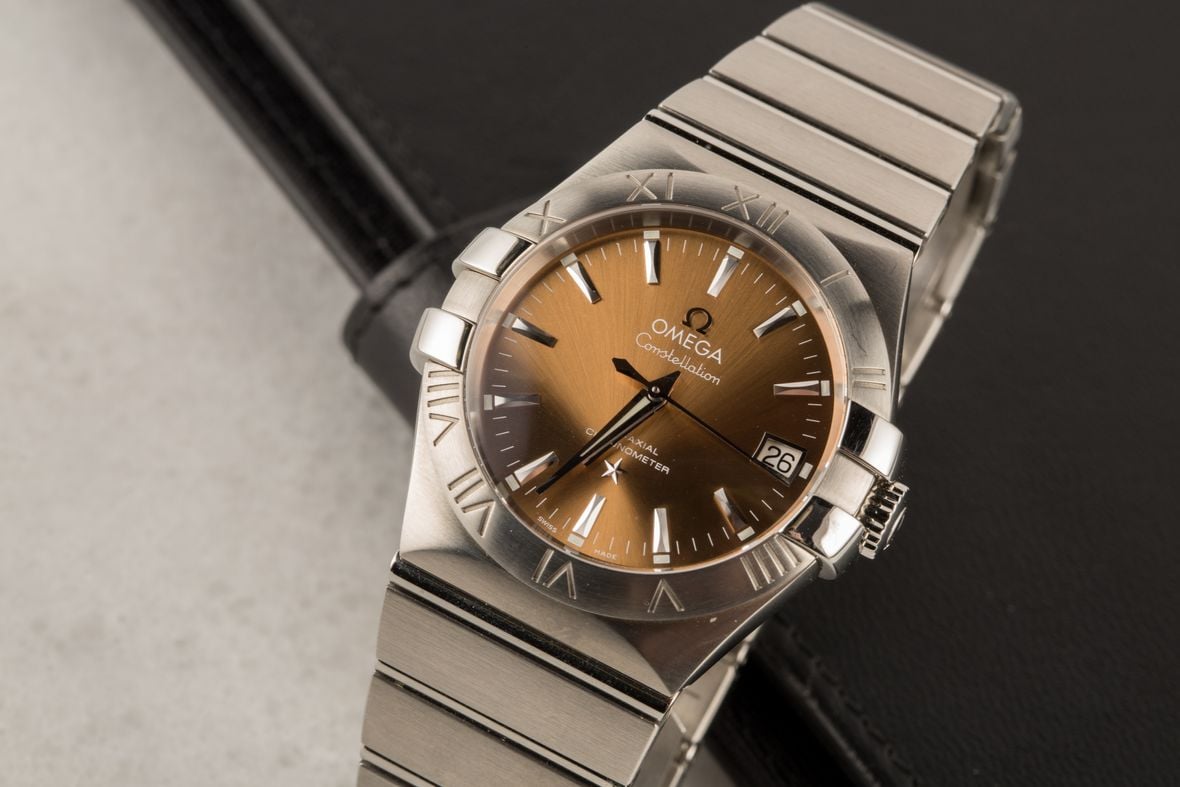 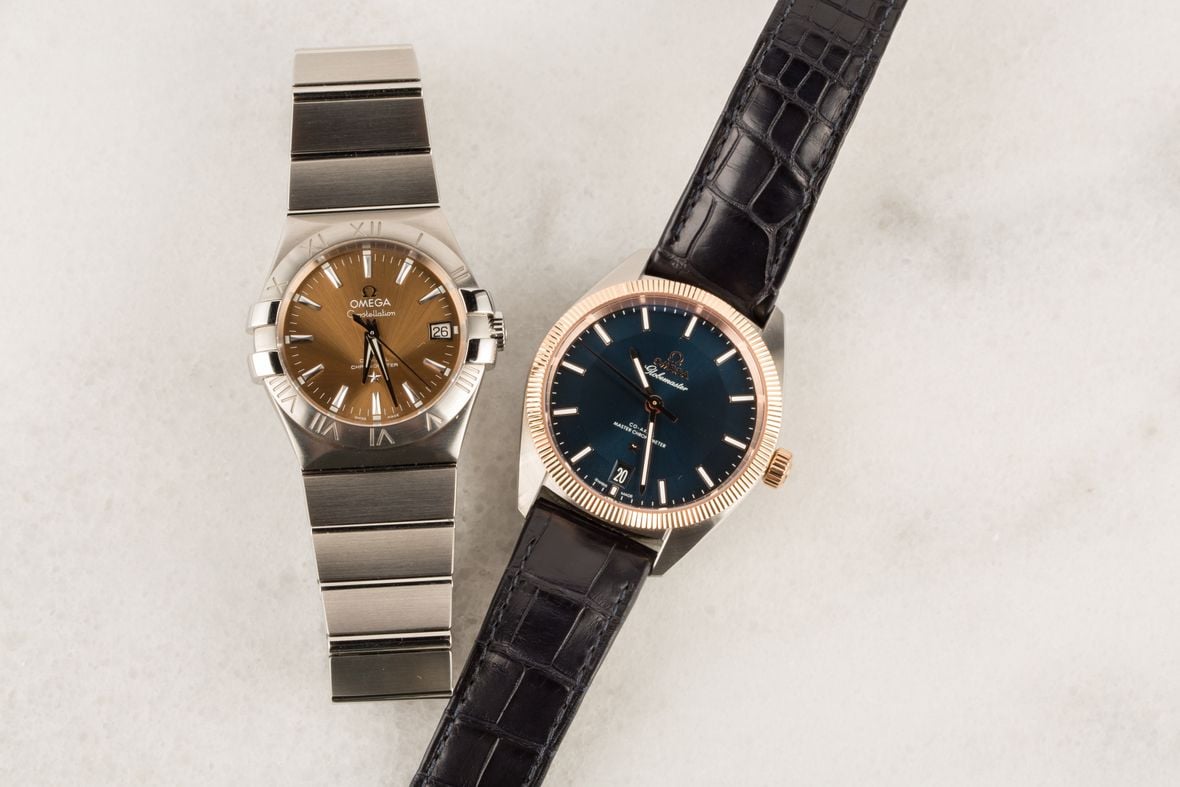 Omega Constellation watches have come in a wide array of metals over the years and has a rich history of including two alloys. Today, collectors love these watches that feature steel and gold for the classic aesthetic that they offer, while stainless steel and solid gold models provide a slightly more modern take on this instantly-recognizable design. 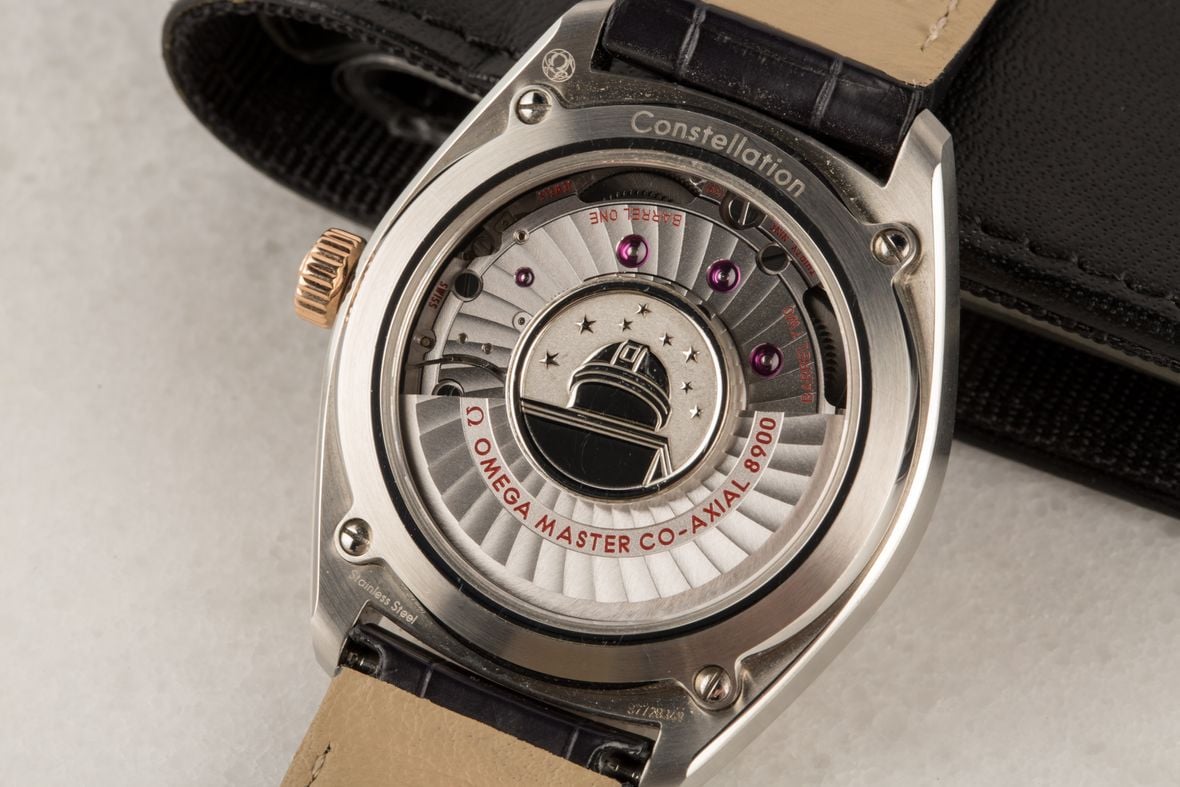 The most iconic vintage Constellation dials are the pie-pan ones from the 1950s and 1960s. These dials are characterized by their raised central area that slopes downward at the chapter ring, making it look like an upside-down pie pan. Many collectors either love or hate pie-pan dials, as they typically offer an inherently vintage overall aesthetic.

After the 1960s, Omega got rid of these pie-pan dials and replaced them with traditional flat dials that came in a slew of their own variations over the years. For many collectors that favor vintage Constellation watches, a pie-pan dial is an absolutely essential feature.

Today, Omega Constellation dials range from blue to chocolate, white, gold, mother of pearl, black, silver, grey, and more, with some featuring diamonds or other gemstones. Additionally, Omega also brought back its classic pie-pan dial with the introduction of the modern Globemaster line that returns to the design language of the original models from the 1950s and 1960s.

Over the years, the Omega Constellation has featured dozens of strap and bracelet styles – including both metal and leather. In terms of collectible vintage bracelet styles, the ‘beads of rice’ bracelet, Milanese woven, and brick link styles are generally among the most coveted on the vintage market. The metal type is also important in terms of collectability – in fact, gold Constellation watches with matching gold bracelets can fetch more than the average yellow gold Rolex Day-Date President.

Other notable bracelets from the Constellation range are those from the late 1960s and 1970s that represent the very first integrated bracelets. It’s also important to note that in terms of collecting, nearly all Constellation watches (vintage or not) will hold more value if they have a matching metal bracelet, so keep this in mind while shopping and collecting on the pre-owned market. 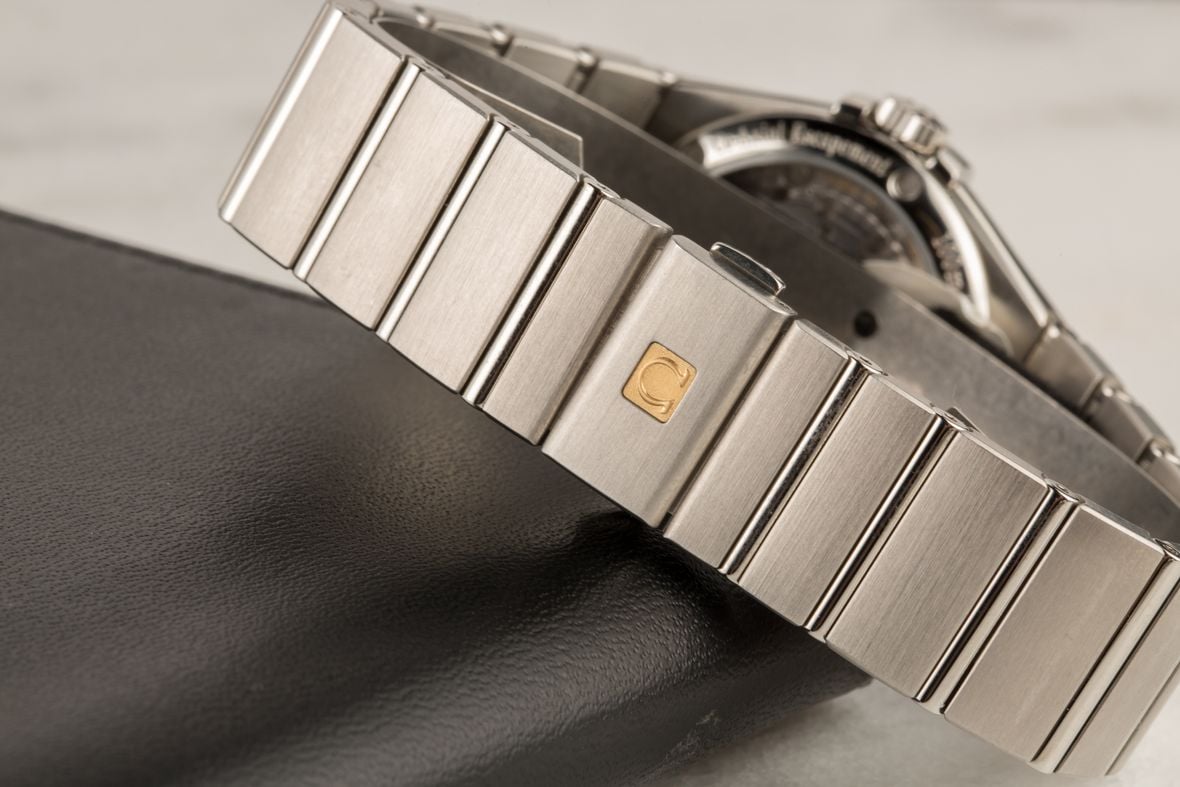 What You Need To Know About Collecting Vintage Omega Constellation Watches

Given that the Omega Constellation has been in production for nearly 70 years, older examples are plentiful on the secondary market. However, an incredibly wide range of diversity exists within this collection, and there are a few more key things to keep in mind when shopping for one to add to your collection.

First and foremost, many older Omega Constellation watches are small. When Omega first started producing the Constellation, it only clocked in at 34mm. While this was entirely standard for the time, 36mm is now considered the ‘baseline’ for most men’s watches and even then, it is often viewed as being on the smaller side. While the Omega Constellation has never been a small watch, older examples are significantly more compact than most versions that the brand produces today.

Another thing to note is that Constellation watches are (for the most part) more affordable than most of their Speedmaster or Seamaster siblings. While the gold versions can (and will) fetch a hefty price tag, you can still get a great deal on a stainless steel or two-tone Omega Constellation, especially when shopping on the pre-owned market. 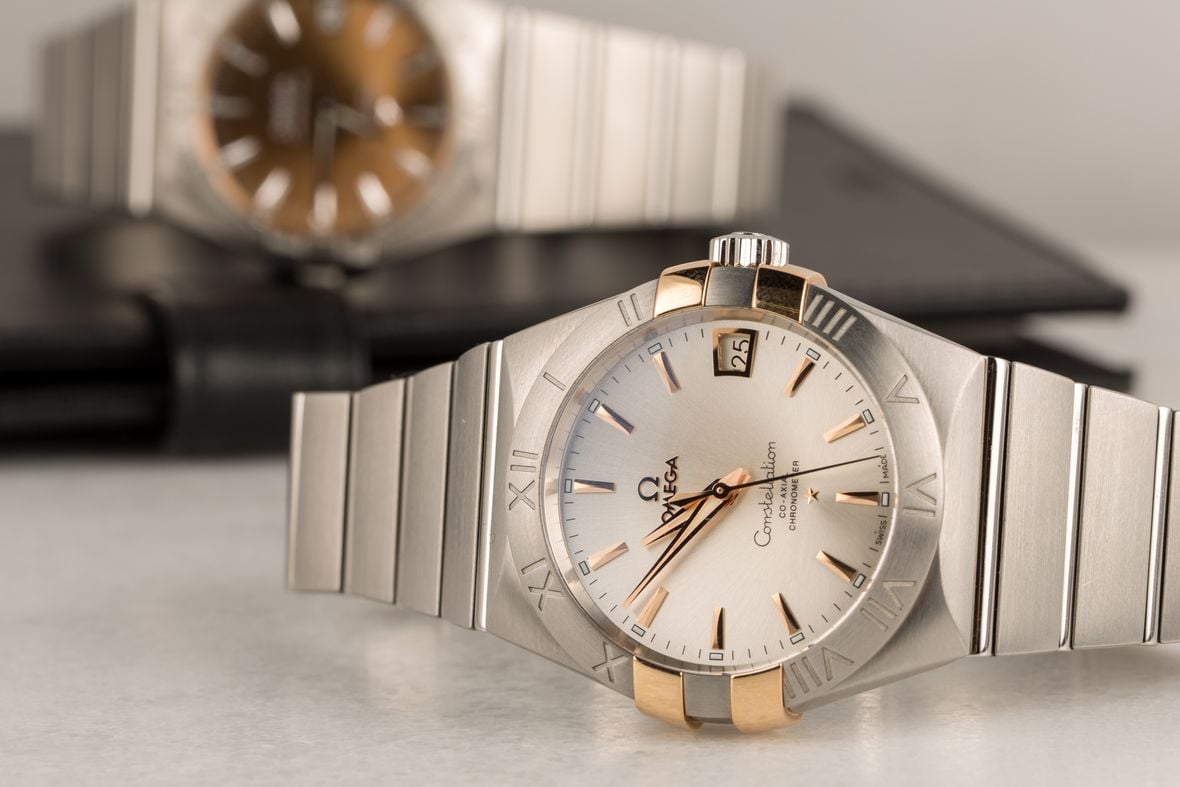 Is The Omega Constellation A Good Watch?

The Omega Constellation was the brand’s very first mass-production chronometer wristwatch, making it incredibly accurate and reliable. The Constellation is also one of Omega’s most popular timepieces and one of the brand’s longest-running collections.

Is the Omega Constellation a Chronometer?

Yes. The Omega Constellation has always been a chronometer-certified timepiece. A chronometer is a specific type of highly-accurate timepiece that is certified by a third-party governing party that has individually tested it to guarantee a high degree of precision and reliability.

How Much Is an Omega Constellation?

The price range of Omega Constellation watches can range dramatically, but there is one for nearly every budget. You can snag a vintage or pre-owned stainless steel Constellation for as little as a few thousand dollars or a solid gold, diamond-encrusted Constellation for north of six-figures.

Is The Omega Constellation Collectible? 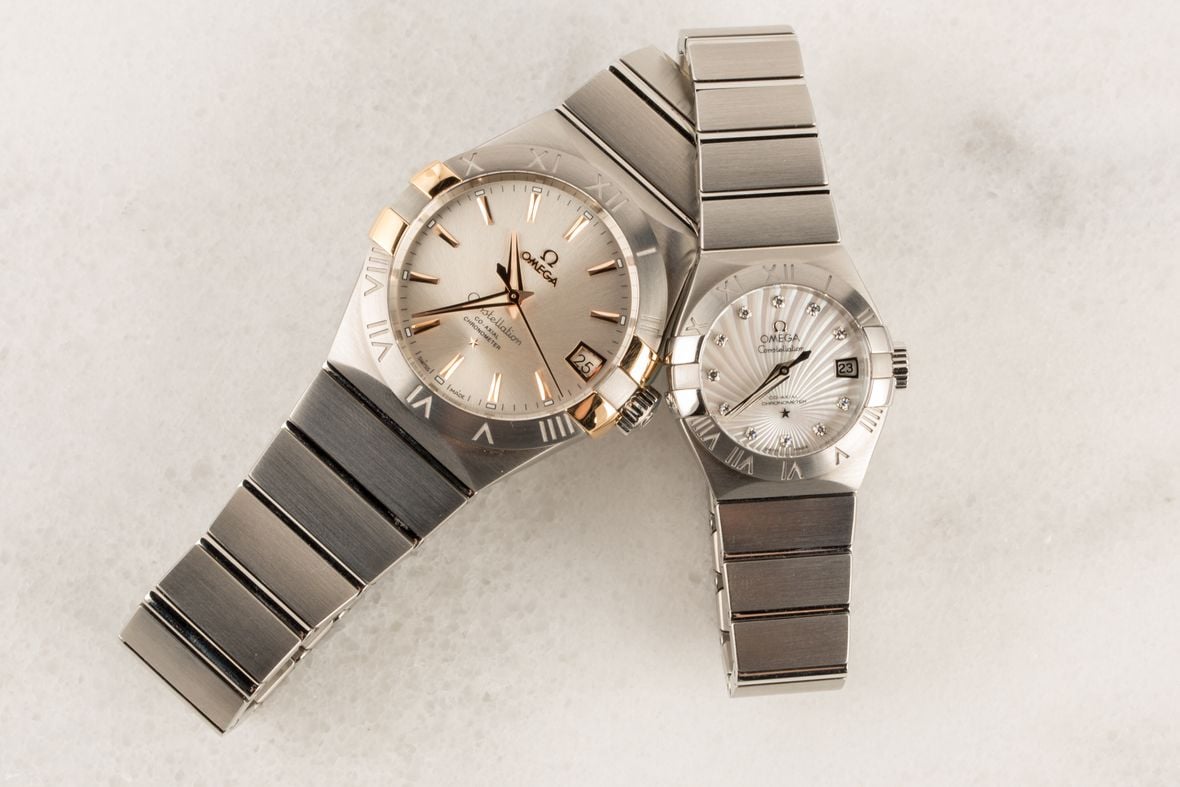