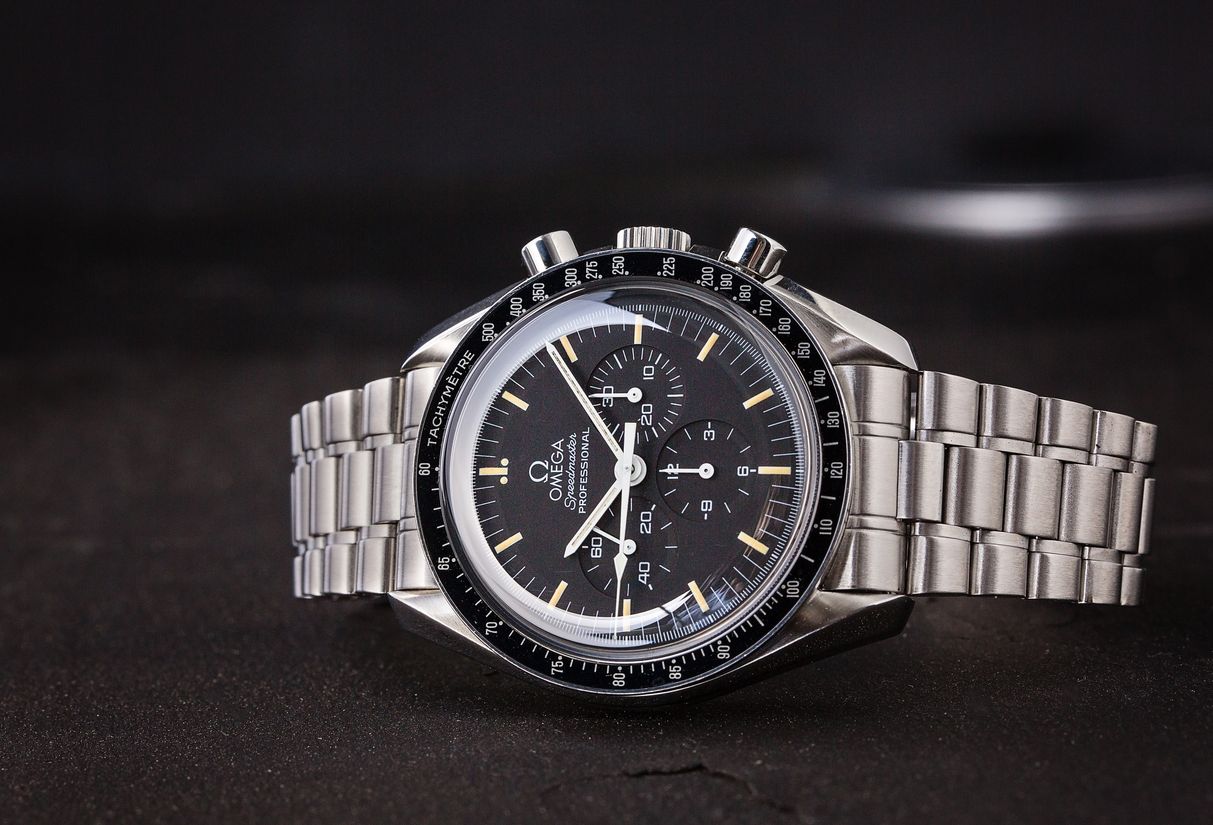 Omega first introduced the Speedmaster chronograph specifically for motorsports in 1957 as part of a trilogy of professional watches – the other two were the Seamaster 300 dive watch and the Railmaster antimagnetic watch. And the current Omega Speedmaster ’57 collection is a tribute to that original maiden reference.

The Omega Speedmaster was the first chronograph to move the tachymeter scale from the dial to the bezel for better legibility. While later models included printed bezel inserts, that very first Speedmaster had an engraved steel bezel, which is now the defining characteristic of modern Speedmaster ’57 watches. 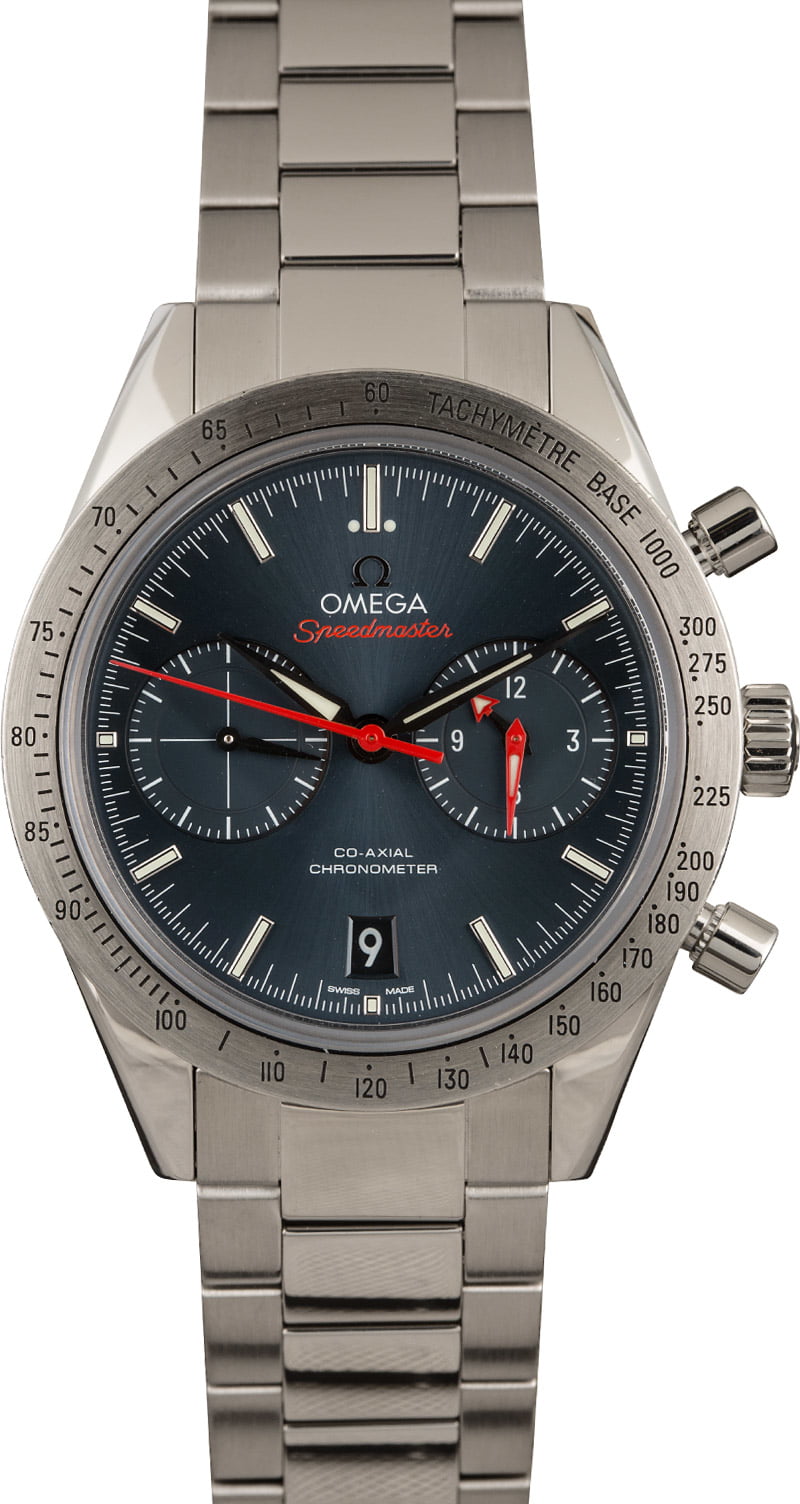 Another common design trait across all Speedmaster ’57 watches are round symmetrical cases with straight lugs and no crown guards. Other nods to the first Speedy found across some (but not all) Speedmaster ’57 models include the Broad Arrow hands, the three-link steel bracelet, and beige-colored lume to mimic the patina that develops with age.

However, unlike the original 1957 Speedmaster, the contemporary Omega Speedmaster ’57 features larger cases measuring 41.5mm cases and automatic Co-Axial movements. The choice of movement also means a dial redesign to include only two sub-dials at 3 and 9 and a date window at 6 o’clock. Furthermore, though the Speedmaster was originally only offered in stainless steel, Omega makes Speedmaster ’57 models in a range of materials including steel, gold, and two-tone configurations.

The only exception to the above design details is the special 60th Anniversary Speedmaster ’57. Unveiled in 2017, this limited edition commemorative watch is essentially a reissue of the 1957 Speedmaster, complete with a 38.6mm steel case, matching steel bracelet, tri-compax dial, and a manual-wind movement inside.

When Neil Armstrong, Buzz Aldrin, and Michael Collins blasted off from Kennedy Space Center in 1969 to begin their journey to land the first humans on the Moon, the three astronauts were equipped with NASA-issued Omega Speedmaster Professional chronographs.

On July 20, 1969, Neil Armstrong became the first person to step onto the lunar surface, quickly followed by Buzz Aldrin – Michael Collins flew the Command Module Columbia alone in lunar orbit while his two crew members were on the lunar surface. And when Buzz Aldrin stepped onto the Moon, he had his Omega Speedmaster Professional strapped to the exterior of his spacesuit. Ever since then, the Speedmaster became known around the world as the “Moonwatch.” 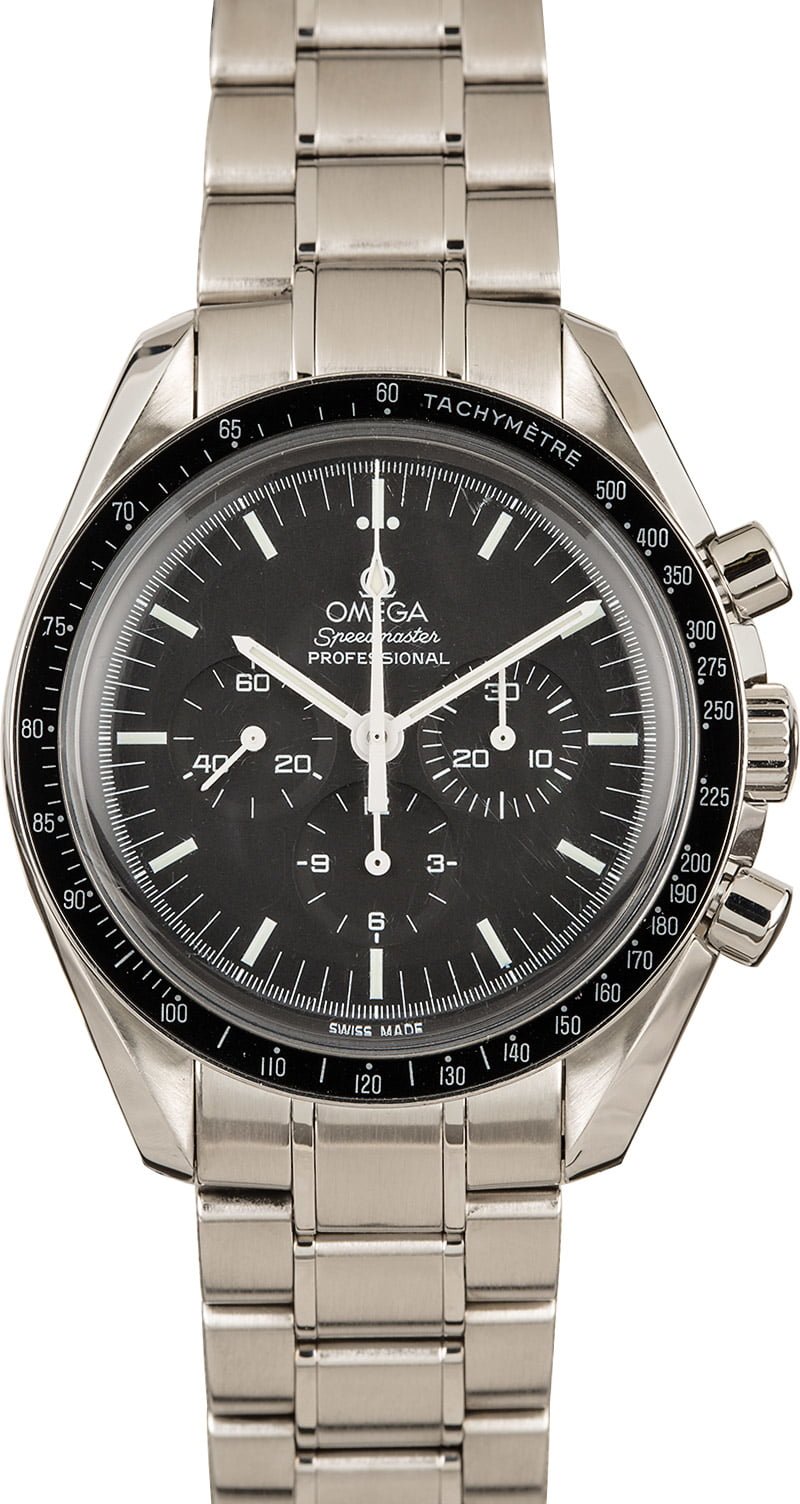 However, since the Speedmaster is now such a varied collection of different watches, the models known as Moonwatches are the direct descendants of the watches worn by the Apollo 11 astronauts. Like their predecessors, the modern Omega Speedmaster Professional Moonwatch models are stainless steel chronographs with 42mm cases, black tachymeter bezels, black dials, and hand-wound movements. The cases of the Moonwatch professionals are asymmetric, characterized by twisted lugs and crown guards.

Today, Omega offers the choice of Hesalite crystals (like the vintage versions) or modern scratch-resistant sapphire crystal, along with the option of a matching steel bracelet or black leather strap. Moreover, those Moonwatch models with sapphire crystals on the dial-side also have sapphire on the display caseback for a view of the movement inside. Current production Moonwatches run on Caliber 1861 (or the derivative, Caliber 1863, for the exhibition caseback versions), which is different from the original Caliber 321 that powered the original Speedmaster Professional watches that went to the moon.

However, it must be noted that Omega did revive the famed Caliber 321 movement in 2019 and has used it across some special Speedmaster editions but not the regular production Speedmaster Professional Moonwatch 42 models – yet. 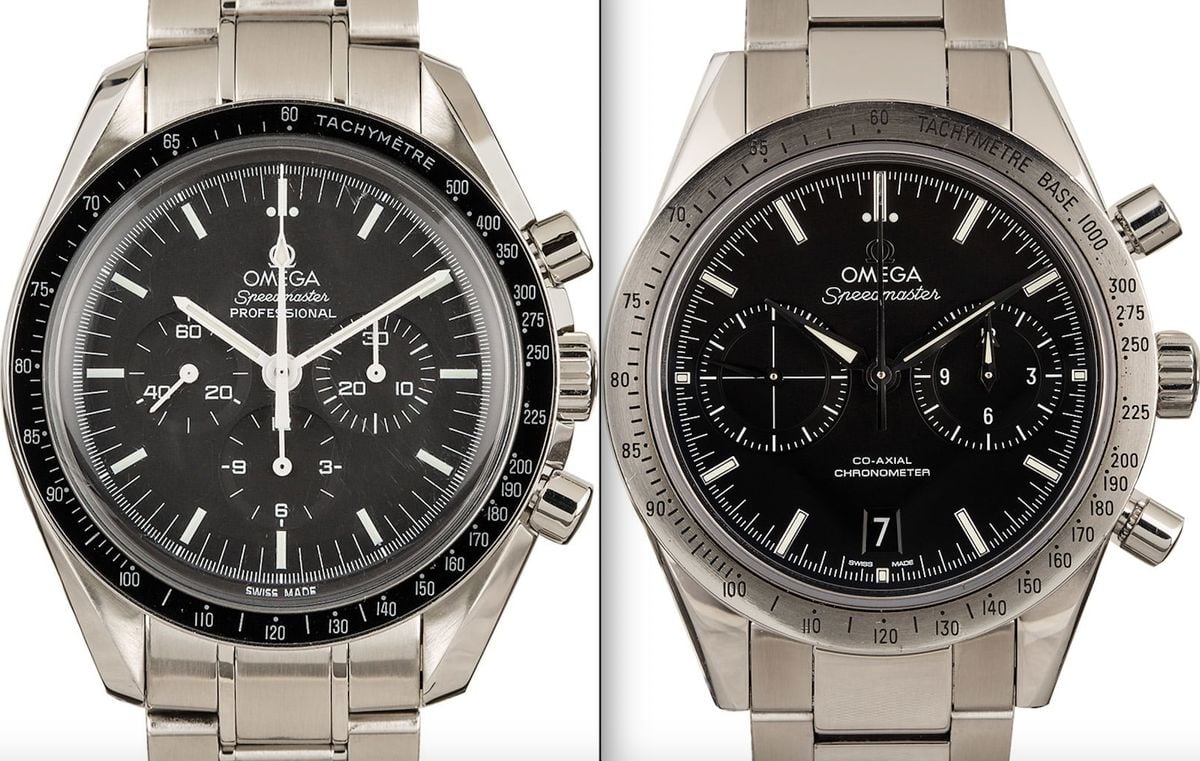 Below you’ll find a quick rundown of the main design specs between the Speedmaster Professional Moonwatch vs. Speedmaster ’57. These specs apply to the regular-production models and not the special limited-edition versions. 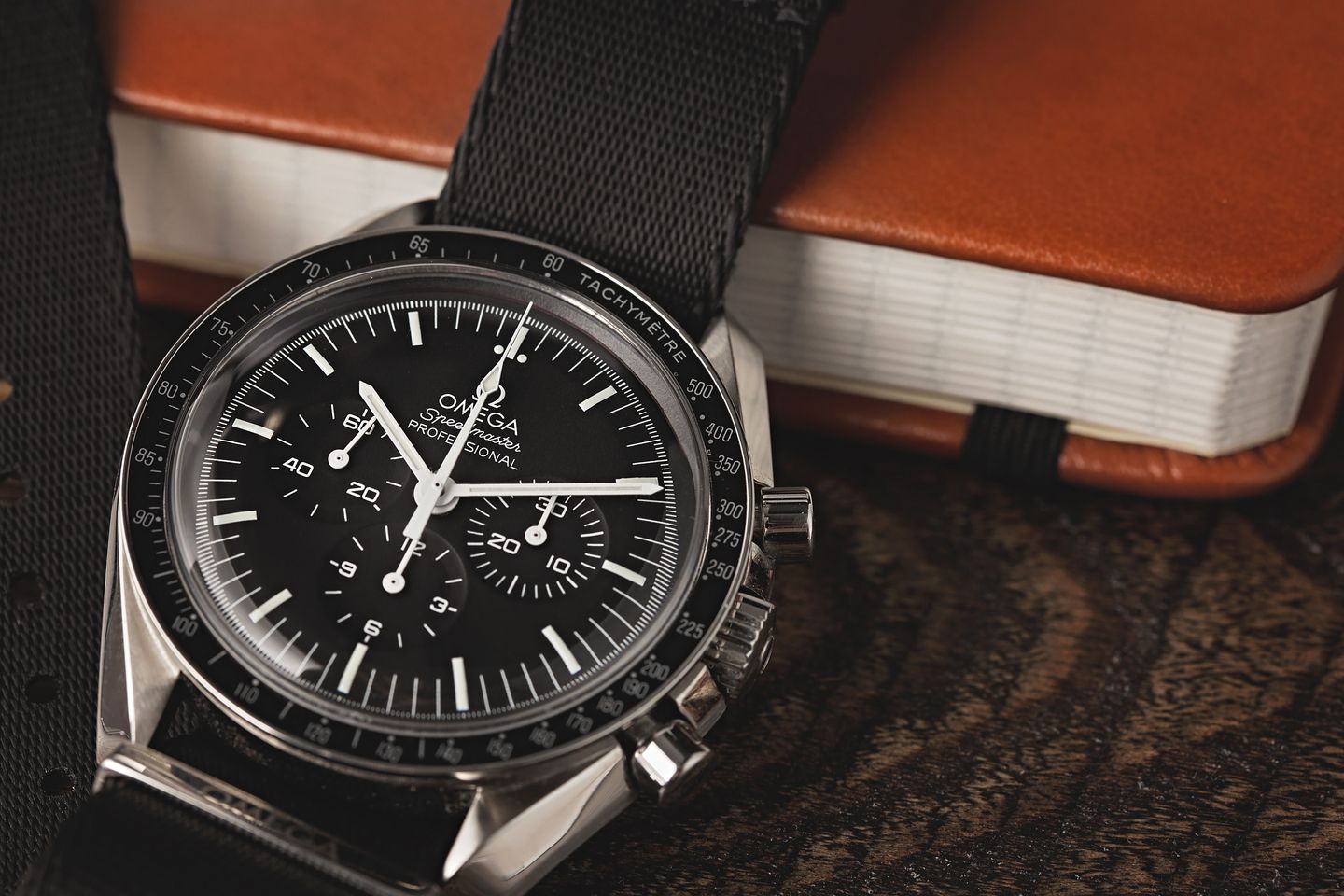