Rolex’s support of golf dates back to 1967 during the era of Arnold Palmer, Jack Nicklaus, and Gary Player – better known as The Big Three. Since then, Rolex watches have become a staple of the golf world and the Swiss watchmaking giant has expanded its commitment to golf by sponsoring tournaments, including major championships, and top-tier players.

The golf ambassador roster at Rolex is expansive and home to some of the best current and retired pro golfers in the entire sport. While most golfers do not wear watches while playing on the course, these ambassadors are rarely seen without a fantastic Rolex watch around their wrist when they don’t have a club in hand. Ever wonder what Rolex watches Tiger Woods, Justin Thomas, Jon Rahm, Brooks Koepka, Lexi Thompson, and others wear? Keep reading to find out the favorite watches worn by Rolex golf ambassadors. 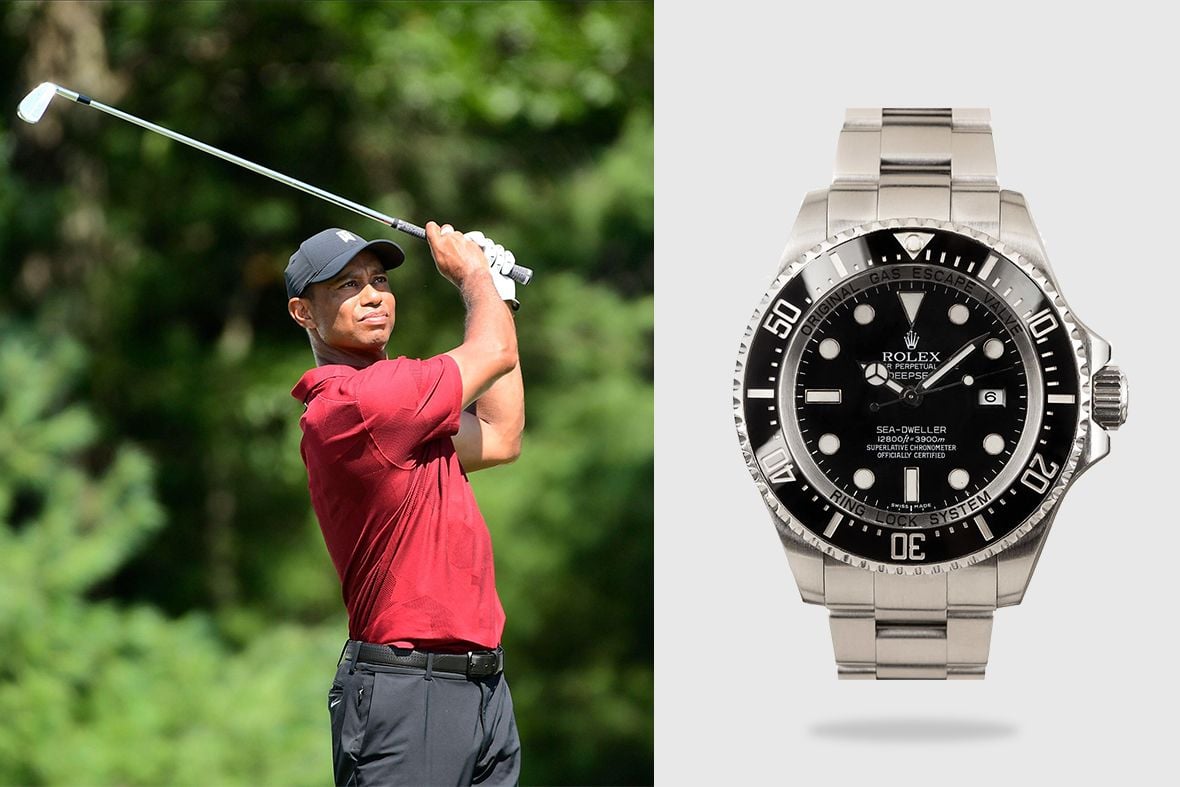 Is there a greater legend than Tiger Woods in the game of golf? We think not. The now-forty-something-year-old player, who turned pro in 1996, single-handedly transformed golf into a sport you wanted to play rather than one you might have mocked. The five-time Masters Champion, four-time PGA Championship winner, three-time U.S. Open champion, and three-time British Open champion brought style and athleticism to golf – and youngsters everywhere wanted to be the next Tiger Woods.

In the late-1990s, Tudor (Rolex’s sister company) signed Tiger Woods as an ambassador, and the brand even launched a range of Oysterdate chronographs bearing the player’s name. Following his partnership with Tudor, Tiger Woods then joined the TAG Heuer family in 2003, where he served as a spokesperson for eight years. Finally, in 2011, the Rolex group brought Tiger Woods back into the fold – and this time, as an ambassador for Rolex.

Since then, we’ve seen Tiger Woods wearing a Rolex Deepsea Sea-Dweller – the brand’s biggest and most capable dive watch. The thick and imposing 44mm Deepsea case is water-resistant to an incredible 12,800 feet (3,900 meters), complete with a helium escape valve, Cerachrom ceramic bezel, and a domed 5.5mm-thick scratch-resistant sapphire crystal. While Rolex does offer the Deepsea with a special D-Blue dial (released in honor of James Cameron’s historic solo dive back in 2012), Tiger Wood opts for the classic black dial version of the watch. 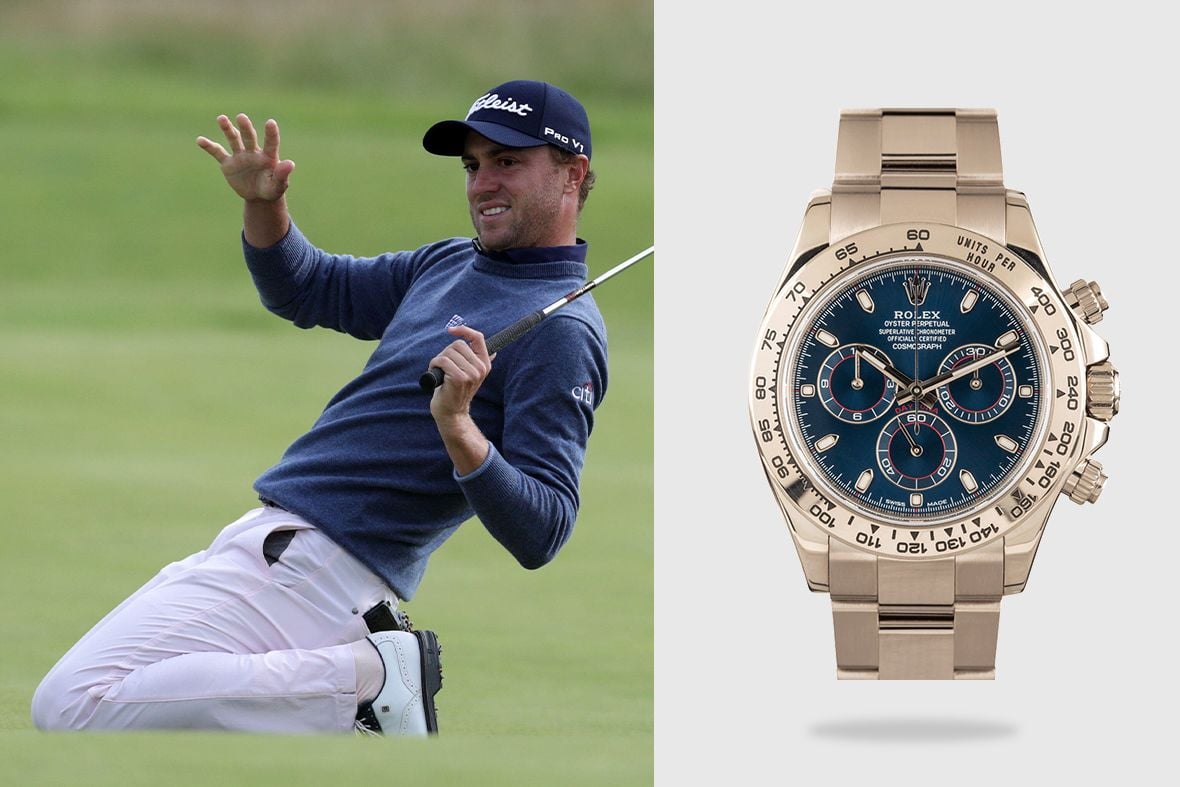 Louisville native Justin Thomas turned pro in 2013 and less than five years later, he became the youngest player to shoot a sub-60 round at just 24 years old. He won the PGA Championship in 2017 and in March 2021, Justin Thomas shot a final-round four-under-par 68 to win the 2021 Players Championship.

Justin Thomas has been a part of the Rolex family for a few years now and we’ve spotted him wearing some fantastic watches including a “Pepsi” GMT-Master II, a Sea-Dweller diver, and a steel and platinum Yacht-Master 40, just to name a few. However, these days, we’ve noticed Justin Thomas wearing the incredible white gold Daytona 116509 with a bright blue dial and red accents – including the Daytona name in red.

There are only a few Daytona references left in the current Rolex catalog with a metal bezel (instead of a Cerachom ceramic one) and the white gold 116509, which made its debut in 2016 alongside the yellow gold model with the green dial, is one of them. 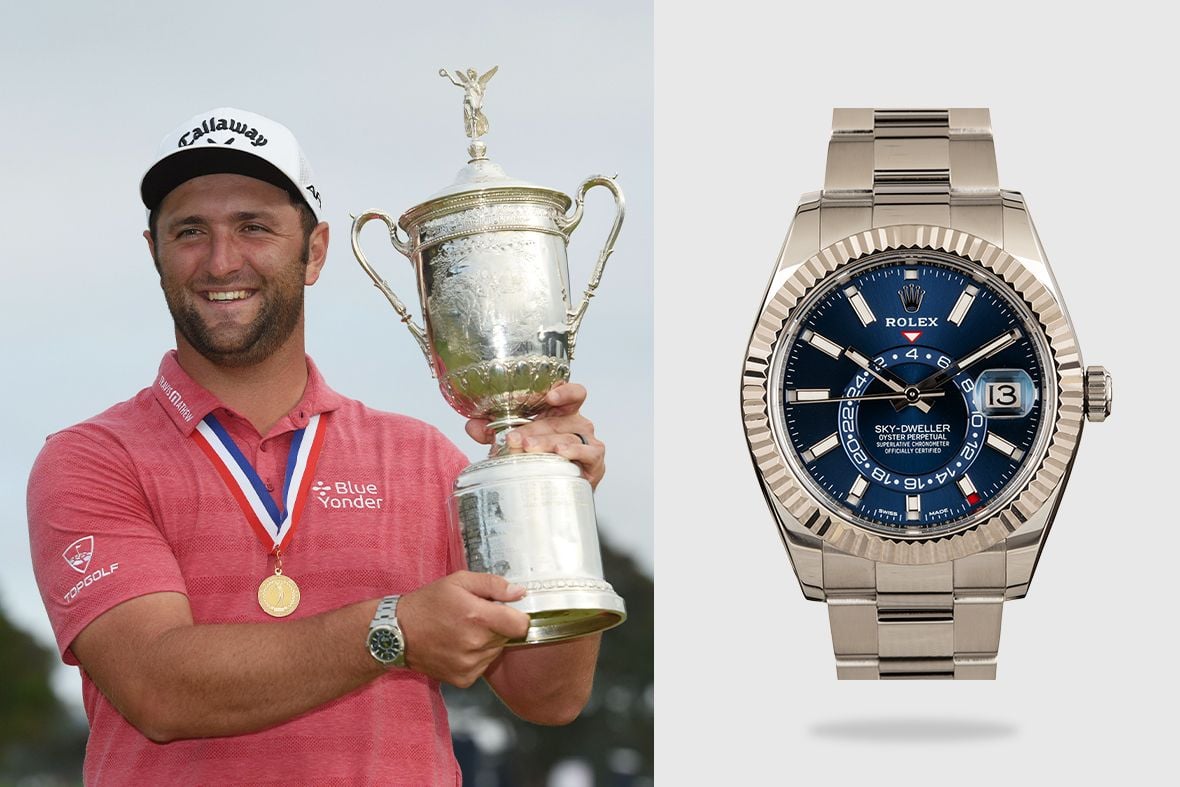 In June 2021, Jon Rahm became the first Spanish golfer to win the U.S. Open. That was his first major tournament win and thanks to his performance during the 2020–21 PGA Tour, Jon Rahm was awarded the PGA Player of the Year for that season, in addition to the Vardon Trophy and the Byron Nelson Award.

As a Rolex golf ambassador, Jon Rahm has worn a few different Rolex watches, including two-tone yellow gold and steel Daytona chronograph and an 18k white gold GMT-Master II with a meteorite dial and blue and red “Pepsi” bezel. However, the watch on his wrist when he held up the trophy after winning the 121st U.S. Open at Torrey Pines was a stainless steel Rolex Sky-Dweller ref. 326934 with a white gold fluted bezel and steel Oyster bracelet.

Jon Rahm’s Sky-Dweller is the blue-dial version, which is the most popular dial option within the Sky-Dweller lineup and only available on the White Rolesor model. The Sky-Dweller is one of Rolex’s most complicated watches, not only boasting a dial that indicates the date, month, and two time zones but also an annual calendar, meaning that the watch only requires manual adjustment once a year. 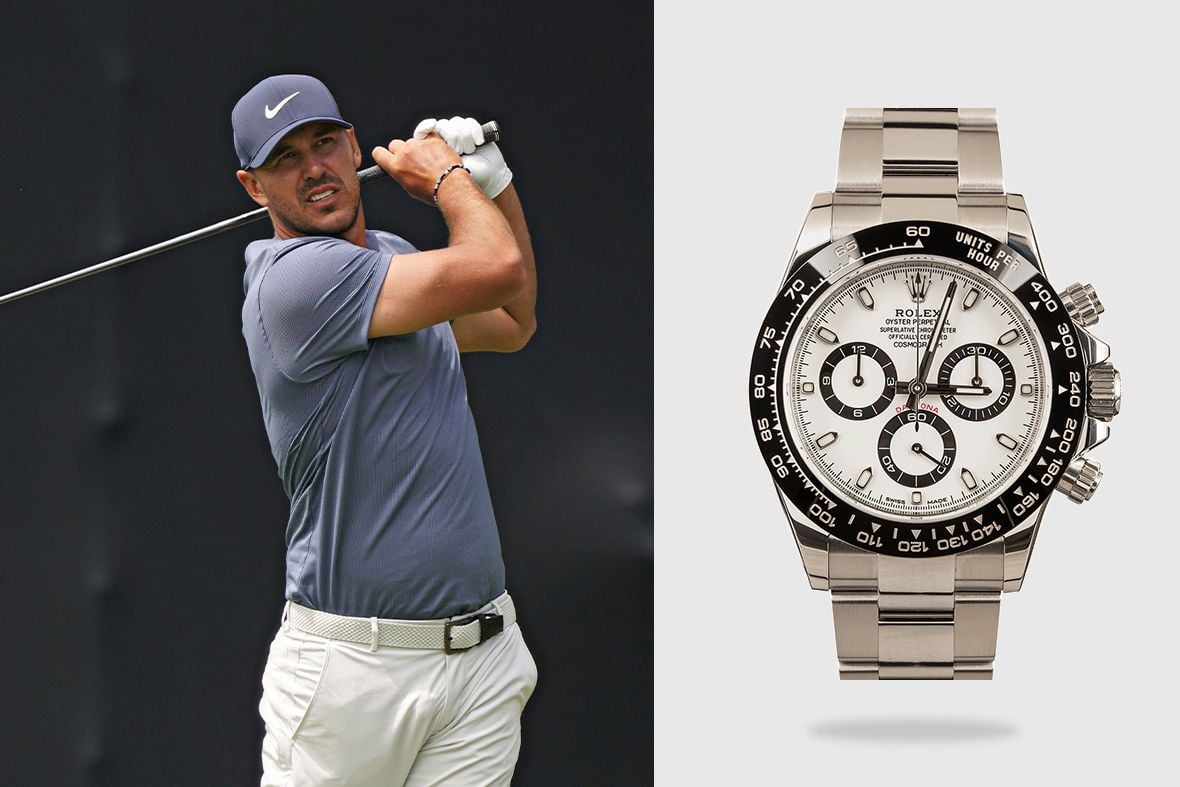 With two PGA Championship and two U.S. Open wins under his belt, Brooks Koepka won his four major championships in a two-year span from 2017 to 2019. He successfully defended the U.S. Open title in 2018 and went on to win his third career major later that year, paving the way for his PGA Tour Player of the Year award. In 2019, Brooks Koepka would capture his fourth major at the PGA Championship, thus becoming the first man to successfully defend two major titles.

However, the Rolex watch that he seems to favor and wear the most is the ultra-popular Daytona 116500LN chronograph with a black Cerachrom ceramic bezel and white “panda” dial. Released in 2016, the Daytona 116500LN remains one of Rolex’s most in-demand watches and virtually impossible to purchase at retail. 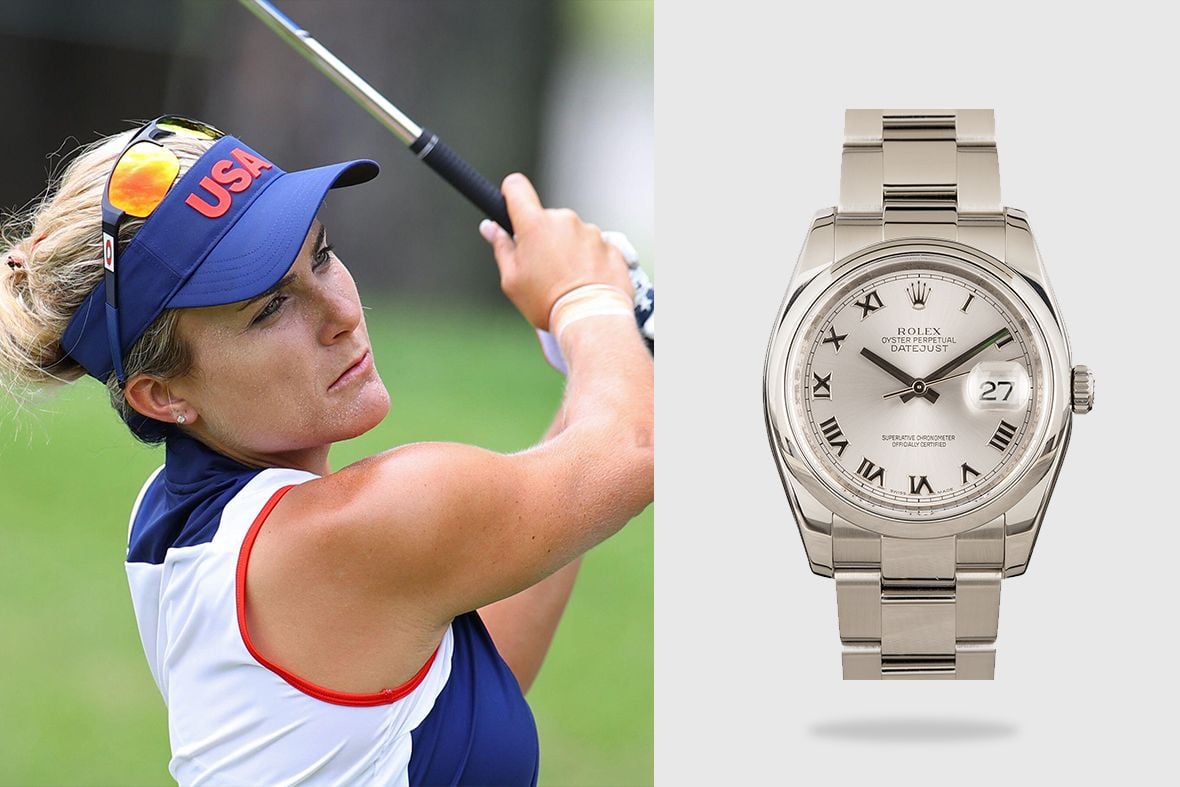 American player, Lexi Thompson, turned pro at 15 years old, and at age 16, she set a then-new record as the youngest-ever winner of an LPGA tournament at the 2011 Navistar LPGA Classic. In 2014, Lexi Thompson won her first career major at the Kraft Nabisco Championship (now known as the Chevron Championship.)

In terms of watches, Rolex ambassador Lexi Thompson is a fan of the Datejust and has frequently been spotted wearing two very different versions of the classic timepiece. The first is an understated stainless steel Datejust ref. 116200 with a smooth bezel, silver dial with Roman numerals, and an Oyster bracelet. Her other Datejust is a much more lavish iteration that is also 36mm but features a two-tone Everose gold and steel case, diamond-set bezel, and two-tone Jubilee bracelet.

Rolex Watches of Other Professional Golfers

In addition to the five incredible players we’ve outlined above, there are, of course, plenty of other Rolex golfers on the list. Here’s are some of the Rolex watches we’ve seen them wearing:

– Maria Fassi wears a steel Datejust 36 with a diamond-set bezel and diamond indexes on the silver dial. 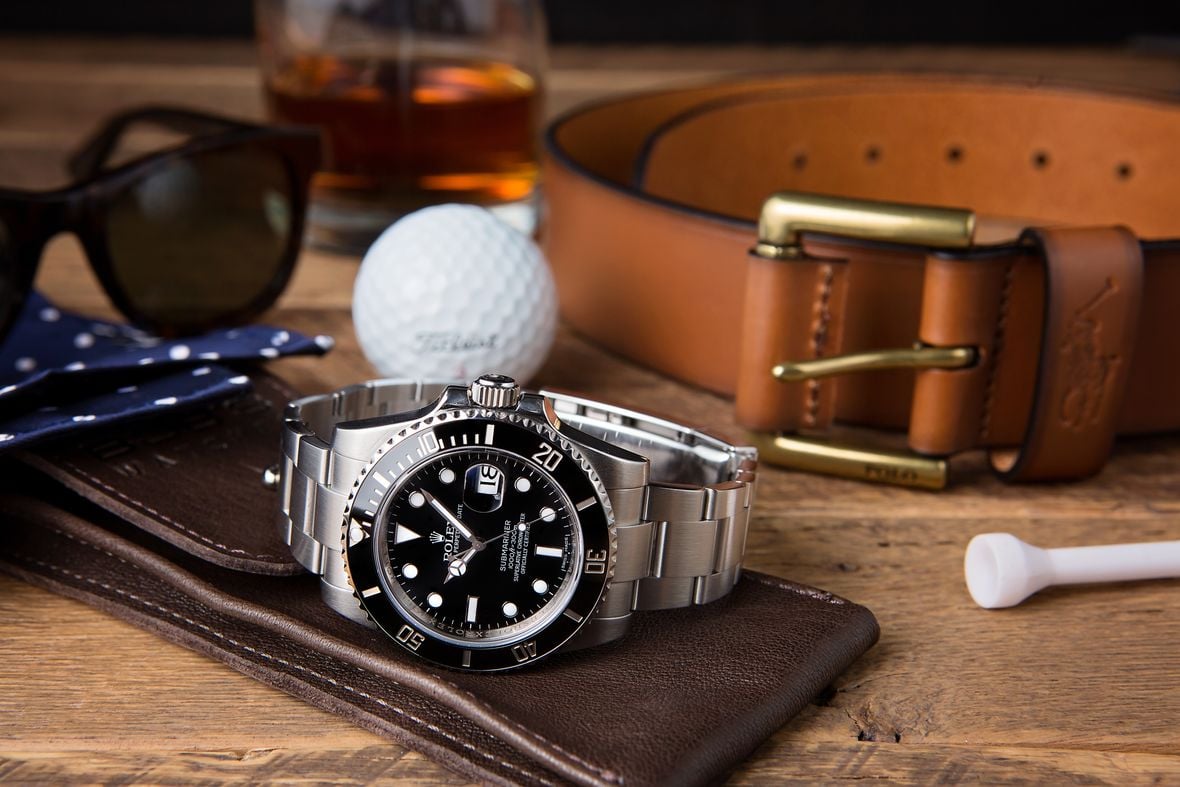