Rolex’s commercial during the 2017 Academy Awards reminded many of us just how frequently their timepieces make an appearance on the silver screen. However, Rolex is by no means the only manufacturer to have their watches featured in blockbuster films; many other luxury manufacturers have become common sightings in Hollywood’s biggest movies.

Did You See Any Of These Movie Watches?

Of all the films in which Omega watches have made an appearance, the James Bond franchise is easily the most famous. Additionally, the 007 films also place the greatest amount of attention on the watches that appear in the films, as they frequently house hidden gadgets that aid Bond during his spy missions. 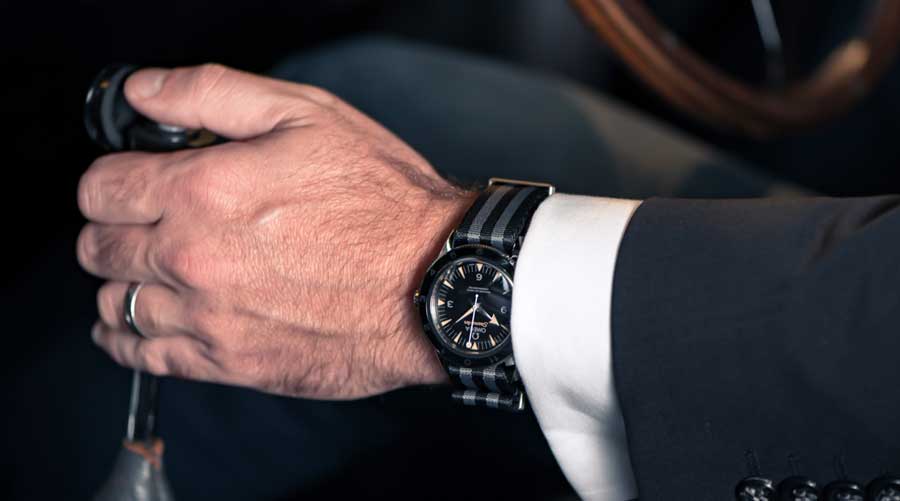 The Omega is now the go-to watch for any 007 film. (credit: Monochrome)

Although author, Ian Fleming, originally wrote that Bond wore a stainless steel Rolex, in 1995, Omega won a bid to become 007’s official watch. From that point forward, an Omega timepiece has been an omnipresent sight on James Bond’s wrist.

As a company that is known for its large, bold designs, Breitling has become another luxury watch manufacturer that is popular among Hollywood’s costume designers and prop departments. In the 2006 film Blood Diamonds, actor Leonardo DiCaprio wore a Breitling Avenger Chronograph while playing a diamond smuggler, Danny Archer. 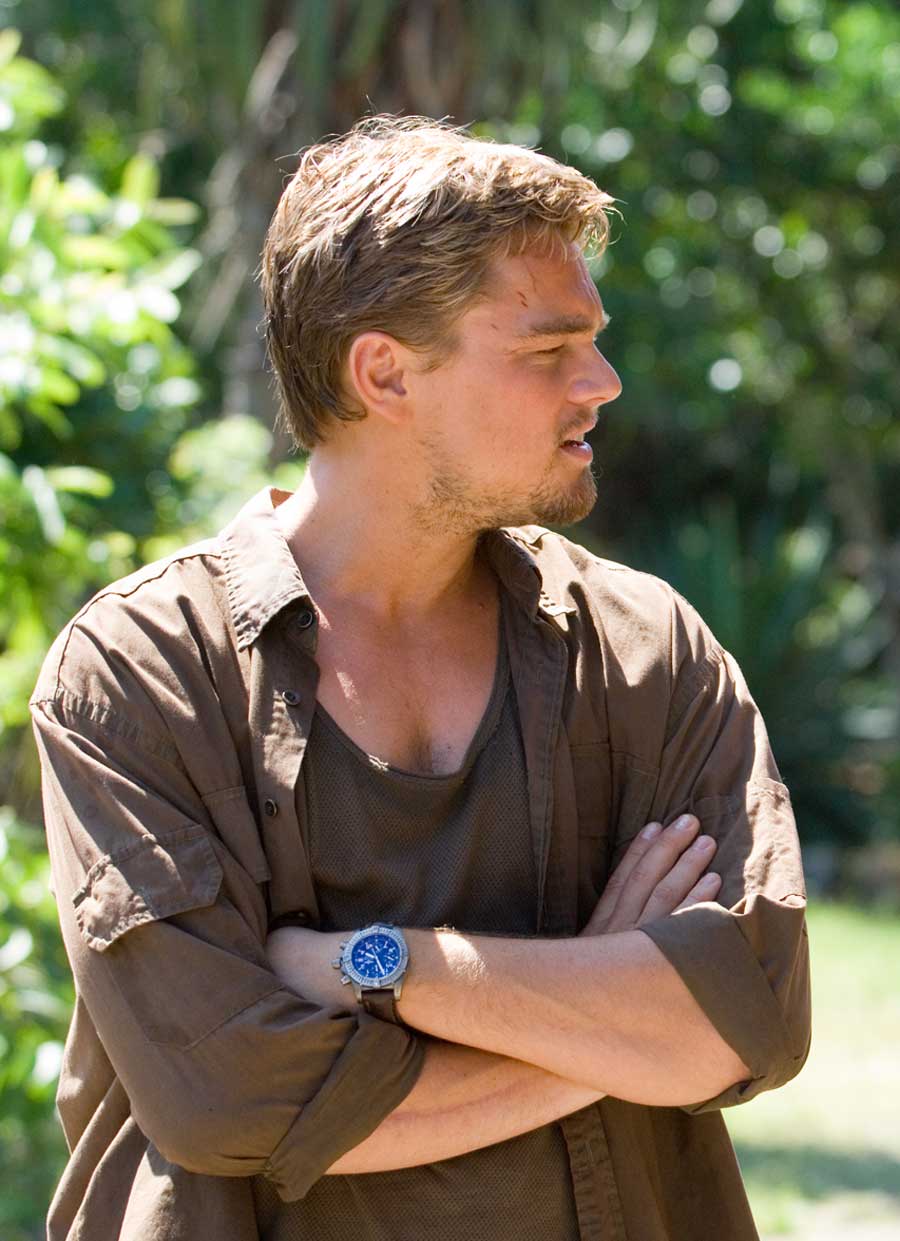 The Breitling is a luxury watch that almost doesn’t fit the scene compared to the raw diamonds found in the movie. (credit: Montre24)

Additionally, as a Breitling Global Ambassador, John Travolta can frequently be spotted wearing different Breitling watches – not just in his movies, but also in his personal life. From Broken Arrow (1996) and Wild Hogs (2007), to The Taking of Pelham 1 2 3 (2009) and numerous red carpet and talk show appearances, John Travolta can almost always be seen wearing a Breitling timepiece.

Panerai is another company whose bold and instantly recognizable designs have made them a favorite for characters in Hollywood films. Throughout the entire Transporter franchise, actor Jason Statham wears Panerai watches while playing specialized, freelance courier driver, Frank Martin.

Although Panerai is now a common choice for action heroes in big feature films, the company can owe much of its success to Sylvester Stallone. Rumor has it, that at some point during a trip in Rome, Sly picked up a Luminor to wear during his movie, Daylight (1996). The Panerai is a perfect match for the classic hero. 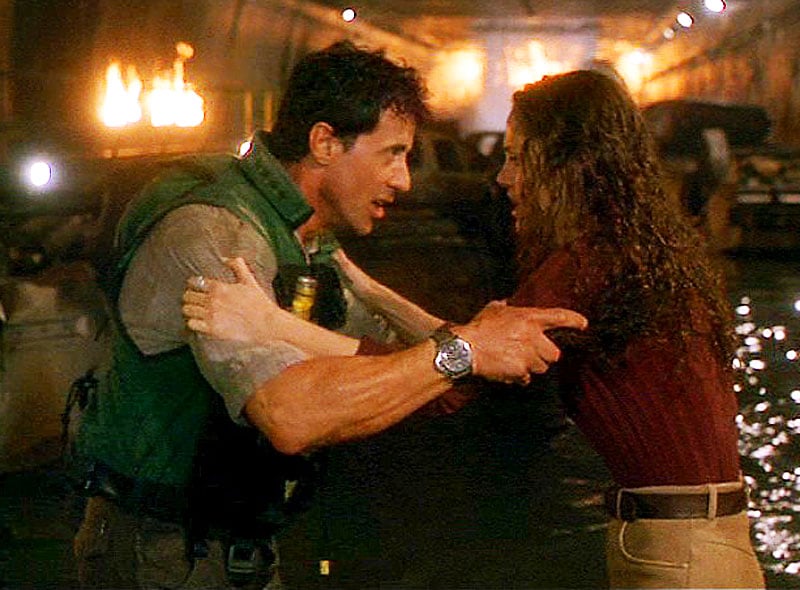 An all time classic actor like Stallone wears a Panerai, fitting for an actor of his caliber. (credit: Paneraiworld)

As Stallone continued to be a major player in the action movie scene, he frequently wore Panerai watches in his films. Over the years, Panerai’s popularity grew as an increasing number of celebrities were spotted with them on their wrists – both in their films and in their personal lives. As a result of their bold designs and prominent film appearances, Panerai has become one of the most widely recognizable watch brands in the world.

While Steve McQueen, AKA the “King of Cool” is often most frequently associated with Rolex watches; McQueen wears a Heuer Monaco in his 1971 film, Le Mans. The large, square case and white sub-dials of the Monaco is instantly recognizable as a Heuer chronograph in the film, and the watch gets plenty of screen time, as McQueen wears it throughout most of the movie.

A very similar Monaco chronograph with a blue dial and white registers makes an appearance in both Speed Racer (2008), and the hit television series, Breaking Bad. While these watches appear almost identical to the one featured in Le Mans, they are actually two different timepieces. 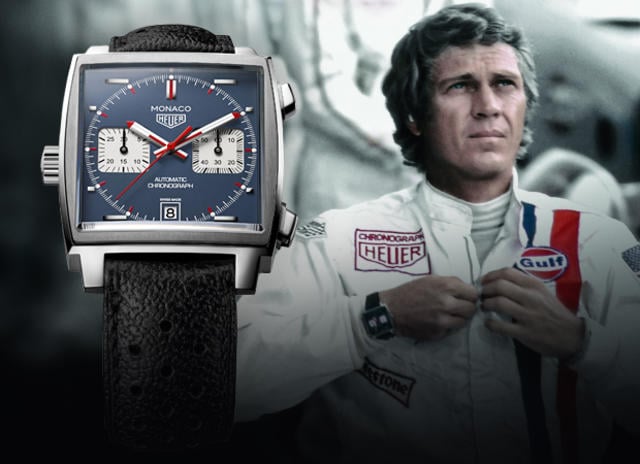 While the Monaco worn by McQueen was a vintage Heuer Monaco chronograph, the watch that appears in both Speed Racer and Breaking Bad is actually the TAG Heuer rebirth of the classic Heuer Monaco, which features a sapphire crystal, an exhibition caseback, and the TAG Heuer name printed on the dial. In both instances, it is the Monaco’s shape and appearance that make it instantly recognizable; and it is likely this iconic design that is responsible for the watch’s success throughout the decades.