Just ahead of Watches and Wonders, Omega has announced a number of new releases for 2021. The new Omega watches are largely from the Seamaster collection, which isn’t surprising considering that the Speedmaster just received a major update at the beginning of this year. However, alongside the various Seamaster models are also new additions to both the Constellation and De Ville collections, and Omega even announced a new metal option that will be added to the brand’s catalog. 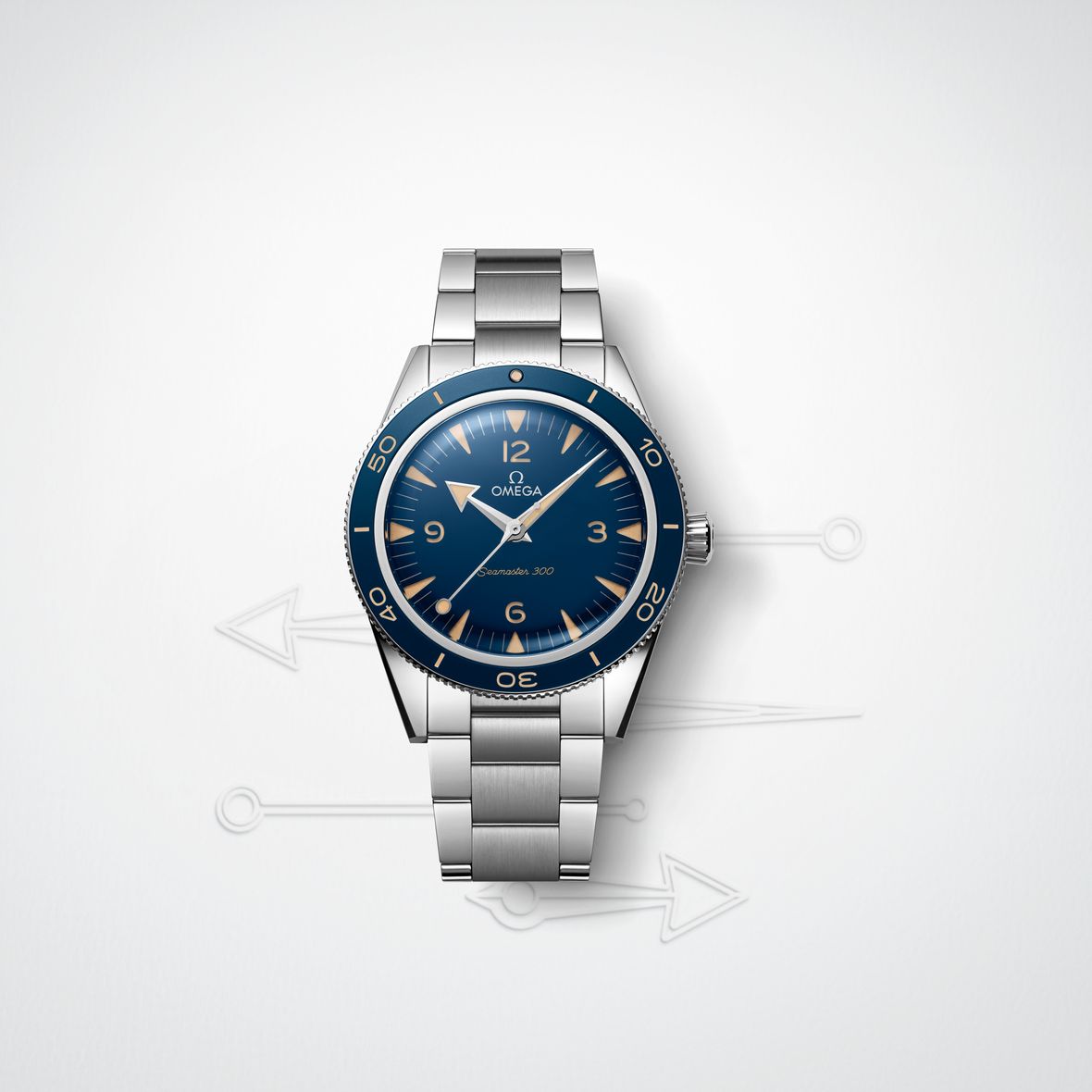 At a quick glance, the new Seamaster 300 watches look very similar to their predecessor, but there are a few quick updates worth noting. As before, the watch features a “sandwich dial” that consists of two layers – a bottom surface fully coated in blue-emitting Super-LumiNova and an upper surface layer with cut-outs for the hour markers. However, while the previous edition of the Seamaster 300 featured a dial that included text relating to its Co-Axial escapement and chronometer certification, the updated model simply says “Seamaster 300” – just like the inaugural model from 1957.

Continuing with the vintage-inspired aesthetic is the return of the “lollipop” seconds hand, which is characterized by a luminous circle placed right at the tip. While the James Bond edition of the previous Seamaster 300 (the “SPECTRE” limited edition) included this retro feature, the standard-production model featured a more traditional arrow-tipped seconds hand, so vintage fans will be excited to see the return of the lollipop style on the new generation. 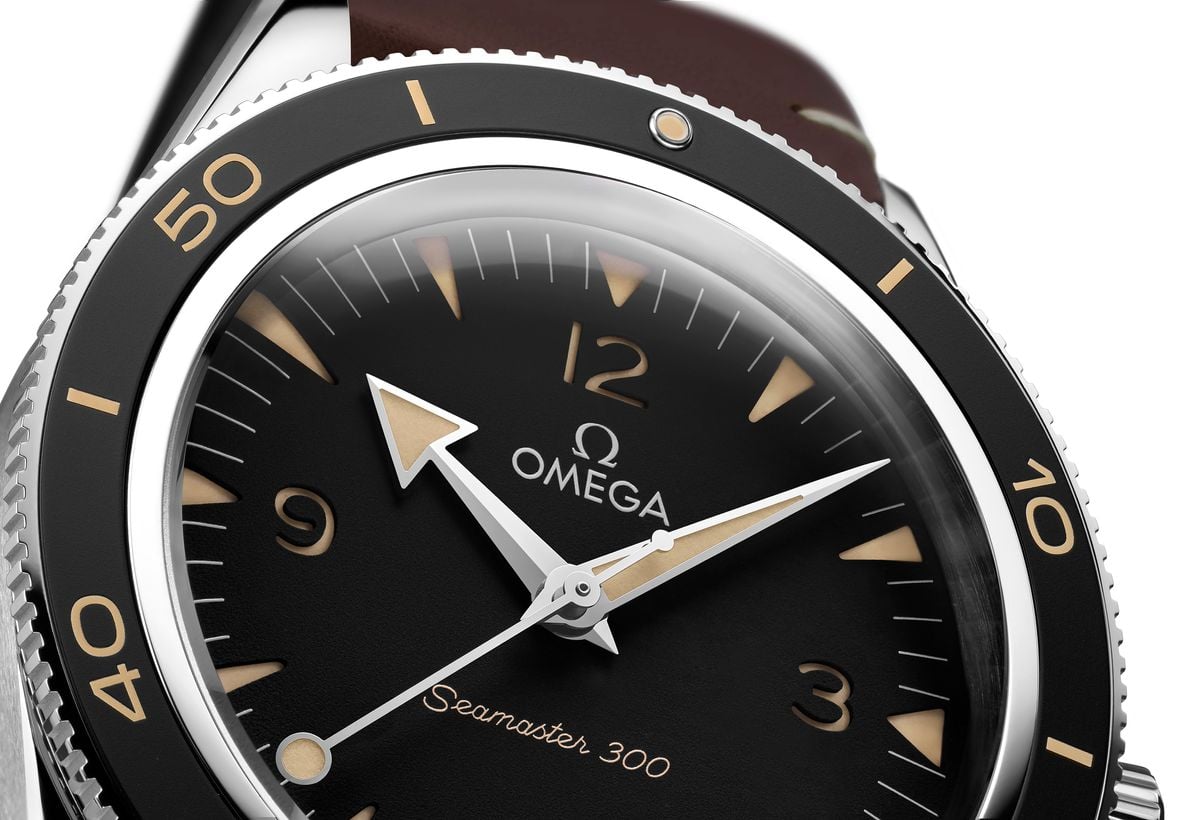 The bezel on the new Omega Seamaster 300 largely resembles the version fitted to the previous generation, but the material used for it has been updated to lean further into the watch’s vintage-inspired roots. Rather than being constructed from LiquidMetal and ceramic as they were before, the bezel insert on the new Seamaster 300 watches is constructed from oxalic, anodized-treated aluminum with Super-LumiNova markings, which promises to be twice as hard as a standard aluminum insert.

Like before, the case of the Omega Seamaster 300 watches measures 41mm in diameter with 21mm lugs, and it is fitted with a domed sapphire crystal and display case-back. However, the case itself has been made thinner and the actual size of the dial has been increased, resulting in more refined proportions than the previous Seamaster 300 watches

The new Omega Seamaster 300 watches are offered on either matching 3-link stainless steel bracelets or leather straps (priced at $6,150 and $6,500, respectively), and buyers will have the option between black and blue when it comes to dials and bezels. Previously, the blue dial and bezel combination was reserved for the precious metal and titanium models, but both colors are now options for the standard stainless steel editions of the new Omega Seamaster 300. 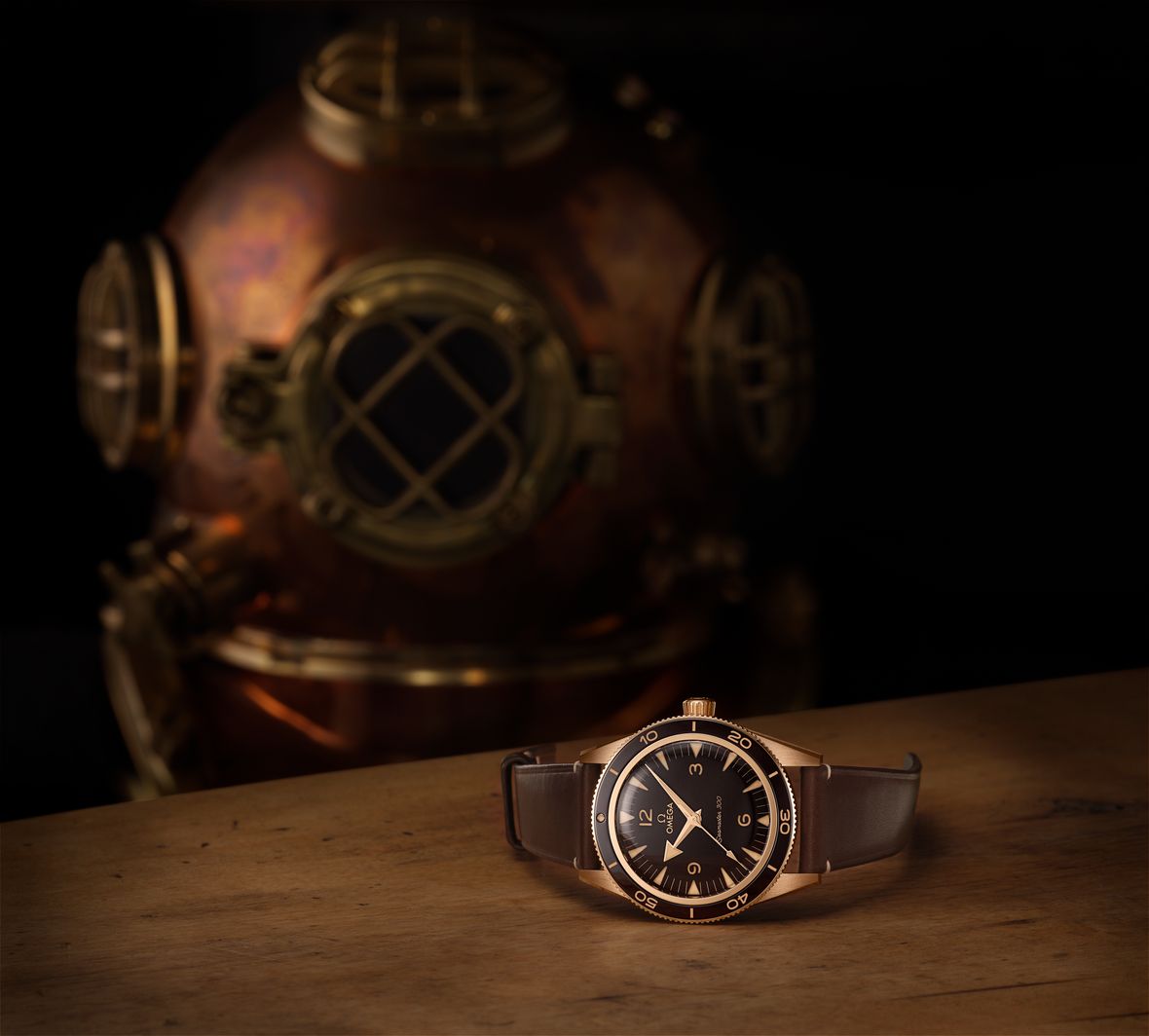 Among the new additions to the Seamaster 300 range is a model crafted from a new material that Omega is calling “Bronze Gold” – and the watch represents the brand’s very first use of this new and proprietary alloy. Traditionally, bronze watches either require their case-backs to be made from a different material, or they use a surface coating on the areas that come into direct contact with the wearer’s skin. Omega wanted to be able to use its Bronze Gold alloy for the entire case of the watch and not need to rely on any special surface coatings or treatments.

Additionally, another requirement for Omega’s Bronze Gold alloy was for it to be able to develop a patina – but in a steady and controlled manner. Part of the allure of bronze watches is their ability to patina over time and reflect the environment and wearing habits of their owners. However, Omega wanted the patina of its Bronze Gold to be more in-line with the natural color of the metal, rather than the green patina that can frequently develop on bronze watches (which also has the tendency of discoloring your skin).

On top of that, Omega also wanted its Bronze Gold alloy to have a color that was distinct from both its 18k Sedna and Moonshine gold. While Sedna is a rich red color and Moonshine is a pale yellow, Omega’s Bronze Gold is intended to occupy the middle point, with distinct bronze-colored tones that are not quite as deep and pronounced as the red hue of Sedna gold. 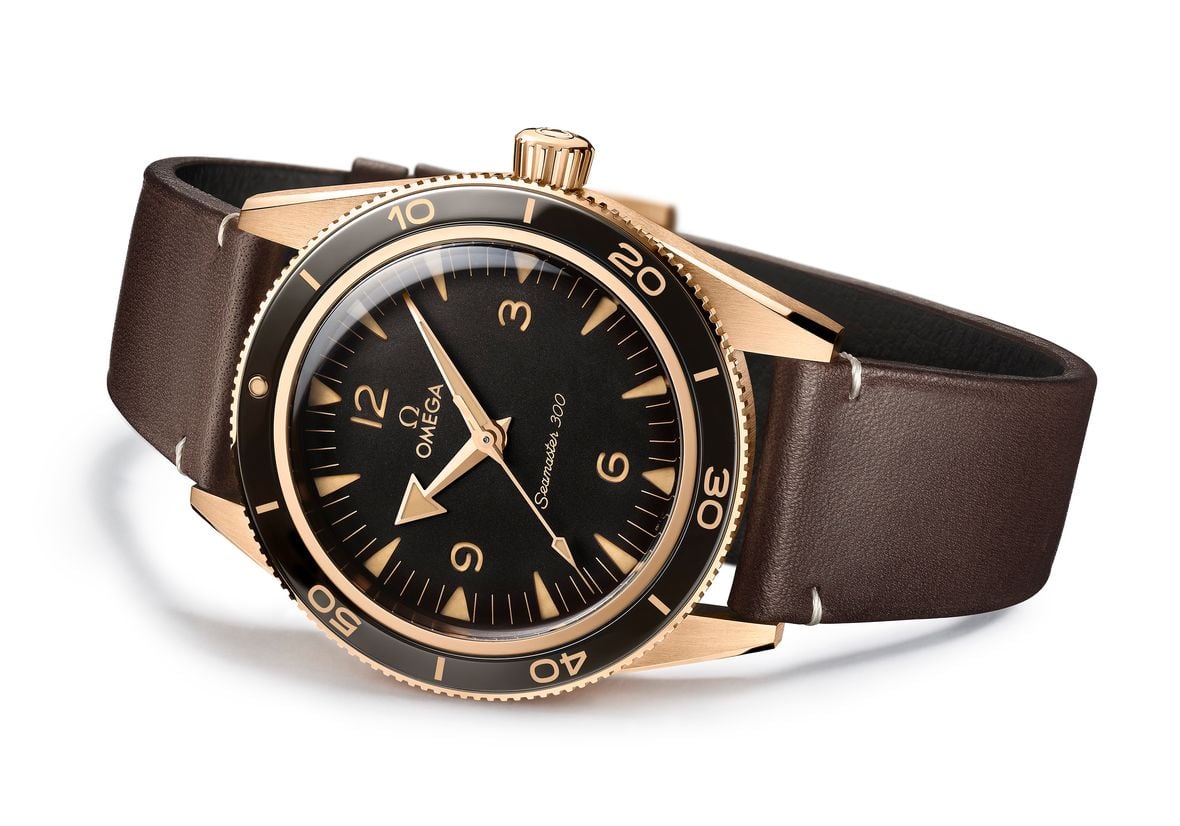 Technically speaking, Omega’s Bronze Gold is a 9 karat gold alloy, as it consists of 37.5% pure gold combined with approximately 50% copper. The remaining percentage is largely made up of silver, gallium, and palladium, which are all chosen due to their effects on color and ability to help lock in the inherent warm tones of the metal. To call Bronze Gold just another type of bronze alloy would be to sell it short, as it is actually a special variety of 9k gold that has been formulated to offer many of the defining characteristics of bronze.

With that in mind, the differences between the Seamaster 300 Bronze Gold and the new stainless steel editions extend beyond just the case material of the two watches. While the steel models are fitted with aluminum bezel inserts, the Bronze Gold edition received a brown ceramic insert with luminous markings, and the seconds hand is of the standard arrow-tipped variety rather than the vintage “lollipop” style like on the steel models. Additionally, while the steel models are offered with either blue or black dials and the option of either a leather strap or bracelet, the Bronze Gold edition is exclusively offered with a brown dial and bezel and fitted with a brown leather strap.

Lastly, the dial of the new Seamaster 300 Bronze Gold continues with the bronze theme established by the rest of the watch. The upper layer of the “sandwich dial” on this model is also made from bronze, but a more common type of bronze alloy (CuSn8). It is then subjected to a special aging process, which results in its unique dark brown color that perfectly matches its brown ceramic bezel insert. Due to the high percentage of gold in Omega’s new alloy, the Seamaster 300 Bronze Gold is priced significantly higher ($11,600) compared to its stainless steel counterparts. 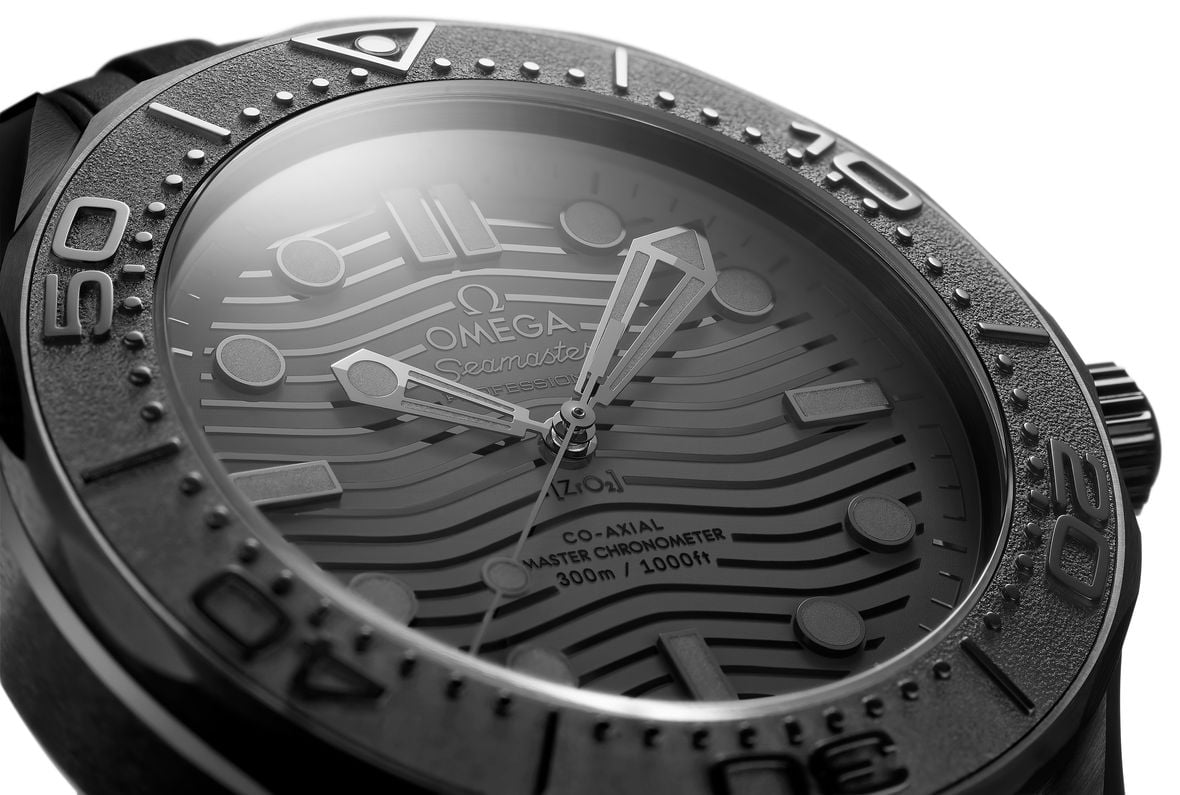 Alongside the new vintage-inspired Seamaster 300 models is a new Diver 300M in black ceramic. This is not the first Omega Seamaster Diver 300M to be crafted from black ceramic, but it is certainly the most-black edition of the watch that Omega has ever put forward.

Everything from the watch’s 43.5mm case to its dial, bezel, crown, and even helium escape valve is constructed from jet-black zirconium oxide (ZrO2). Even the hands, hour markers, rubber strap, and luminescent material are all colored black. Omega uses anthracite Super-LumiNova, which allows the hands, bezel, and hour markers to all glow different colors in the dark but appear dark-grey (almost black) in the daylight.

Powering the watch is the METAS-certified Caliber 8806, and just like other Omega watches that use this movement, the new Seamaster Diver 300M Black Black is a time-only model and lacks the date-display found on most other Seamaster Diver 300M watches. With the exception of the Caliber 8806 movement inside and the clear sapphire crystals fitted above the dial and case-back, the entire watch is constructed from black ceramic.

Due to its use of high-tech modern materials, the new Seamaster Diver 300M Black Black is priced higher than the standard Diver 300M watches ($8,650). However, it is still less expensive than the two-tone versions of the Diver 300M that are fitted with matching steel and gold bracelets. 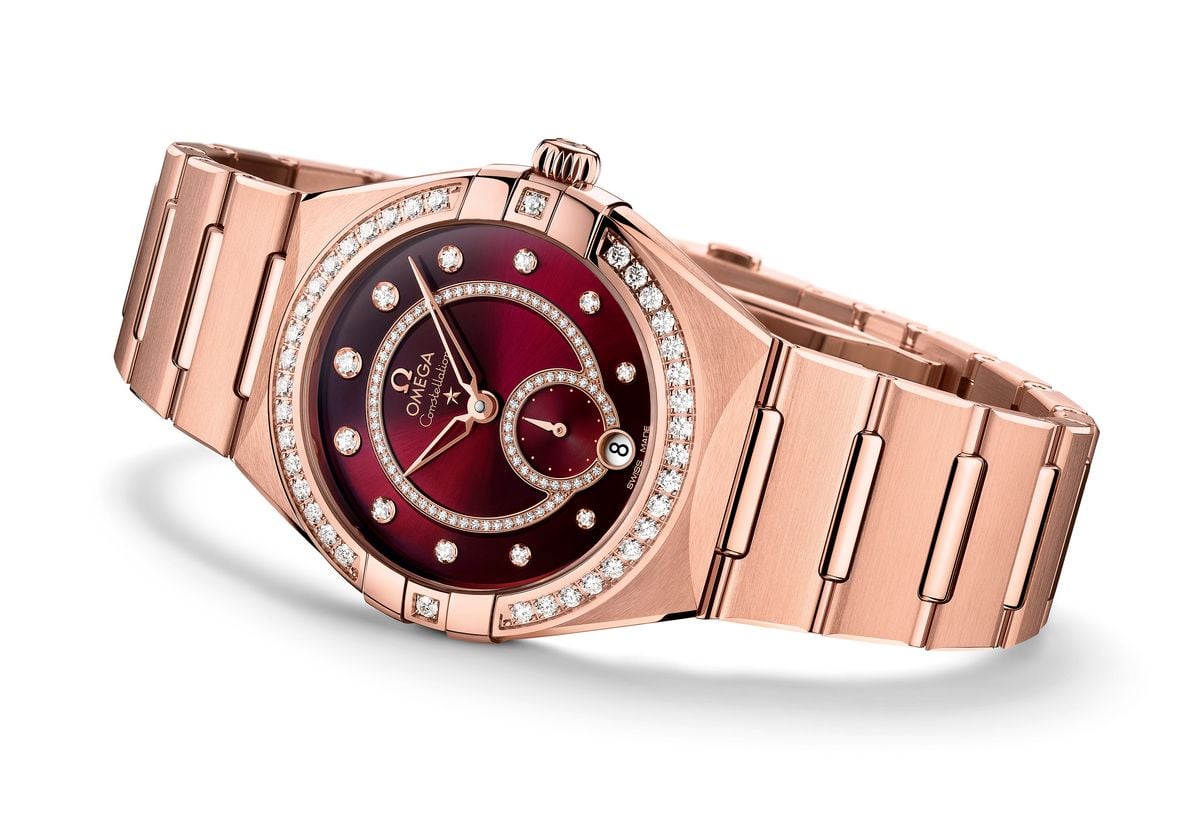 Alongside the range of new Seamaster models is a new lineup of Omega Constellation Small Seconds watches. Offering a new size of 34mm, the new Constellation watches follow the recent 5th generation of the Constellation, which is largely based on the Manhattan model from 1982 and includes polished bevels along the sides of the case and bracelet.

Offered in stainless steel, 18k Sedna gold, or a two-tone combination of both metals, the new Omega Constellation watches offer a perfectly balanced dial with a circular date window at 6 o’clock sitting directly below the small seconds sub-dial. Additionally, the new Omega Constellation Small Seconds watches are offered in configurations ranging from plain stainless steel models to lavish solid-gold creations that are adorned with diamonds.

Powering the new Omega Constellation Small Seconds models are either the Caliber 8802 or Caliber 8803 movement. The two calibers are identical in terms of performance, but the latter includes an 18k Sedna gold rotor and balance bridge, and it is only fitted to the solid gold examples from the range. However, despite being different movements, both the Cal. 8802 and Cal. 8803 are METAS-certified chronometers with free sprung-balances, silicon balance springs, and 55-hour power reserves.

Retail prices for the new Omega Constellation Small Seconds watches can range dramatically depending on their materials and specific configuration. The entry-level stainless steel model on a leather strap retails for $6,300 but prices can reach $35,700 for the solid 18k Sedna gold version fitted with a diamond-set dial and bezel. 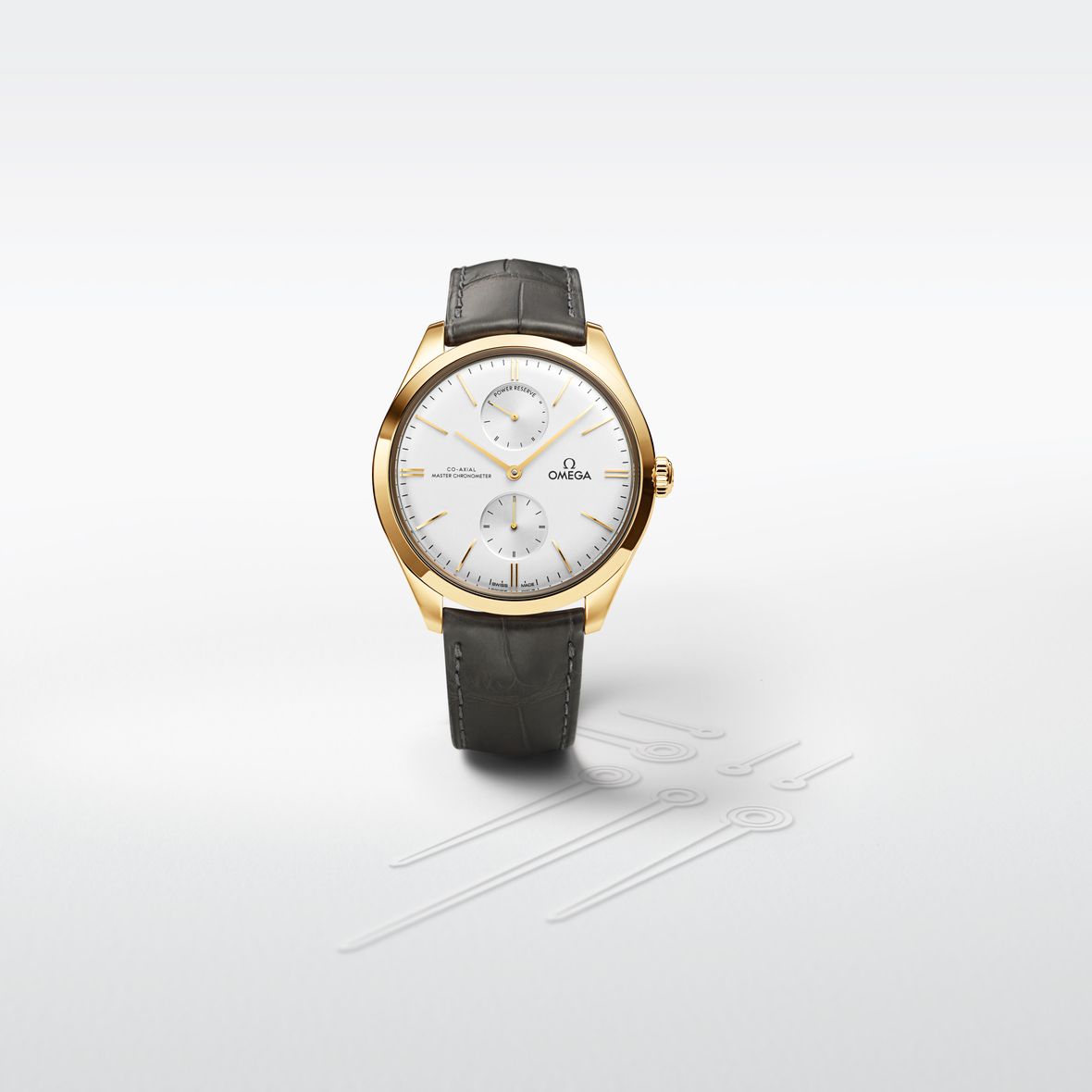 Prices range from $7,050 for the stainless steel editions of the new Omega De Ville Trésor Small Seconds to $17,500 for the solid 18k gold versions of the Small Seconds Power Reserve. Since the De Ville is Omega’s dedicated collection of dress watches, all of the new Trésor models are fitted with leather straps that compliment the color of their dials. 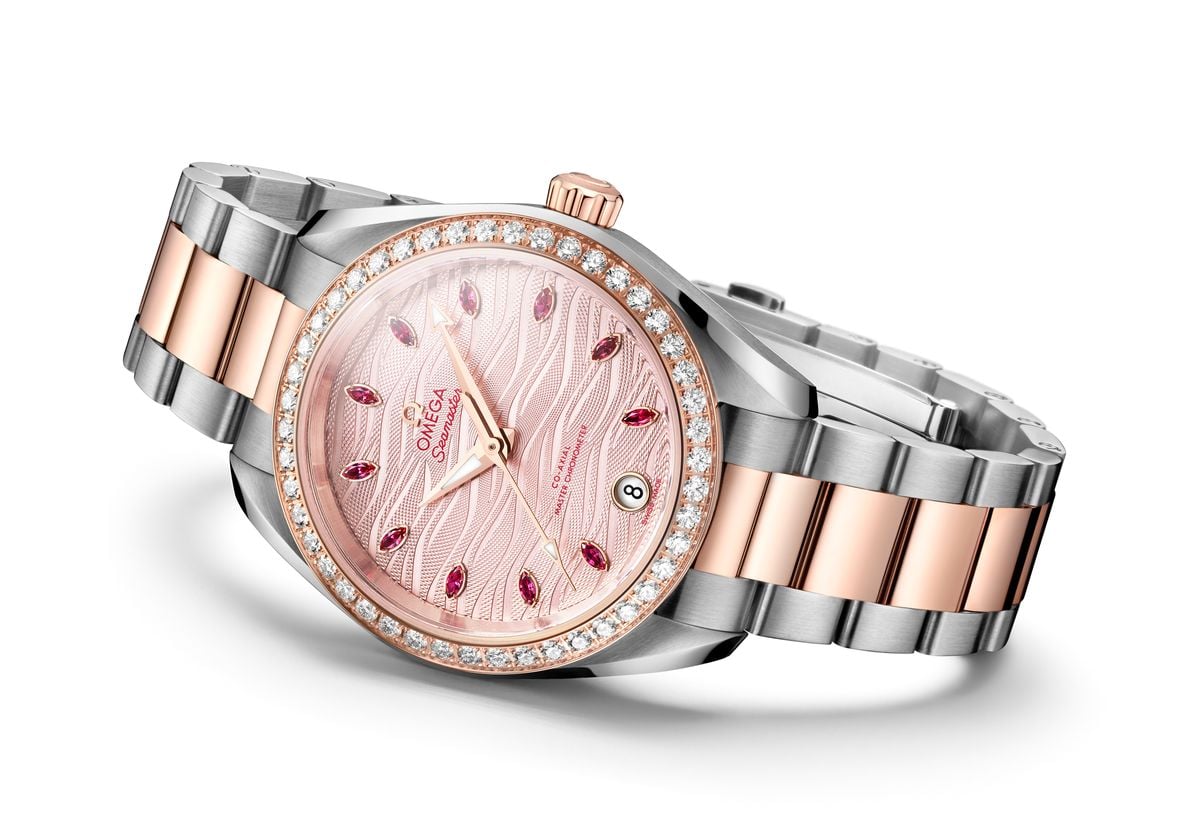 Powering the new gem-set Aqua Terra watches is the Omega Caliber 8800, which is a METAS-certified chronometer with a silicon balance spring and a 55-hour power reserve. Since these new Aqua Terra models are designed to be luxury-oriented options within the lineup, prices can range dramatically demanding on the use of gemstones, and the top-of-the-line model with a diamond bezel and ruby-set dial comes with an official retail price of $20,500.

Lastly, it would not be an overview of new Omega releases without some mention of the Speedmaster. While the brand did not announce any new additions to the lineup with this batch of new releases, there is a new strap for the Speedmaster that draws inspiration from the velcro straps used by astronauts to strap over the thick sleeves of their spacesuits. The new 2-piece velcro straps are complete with both NASA and Speedmaster insignias and make the perfect strap option for the die-hard space enthusiast.

* All images courtesy of Omega. 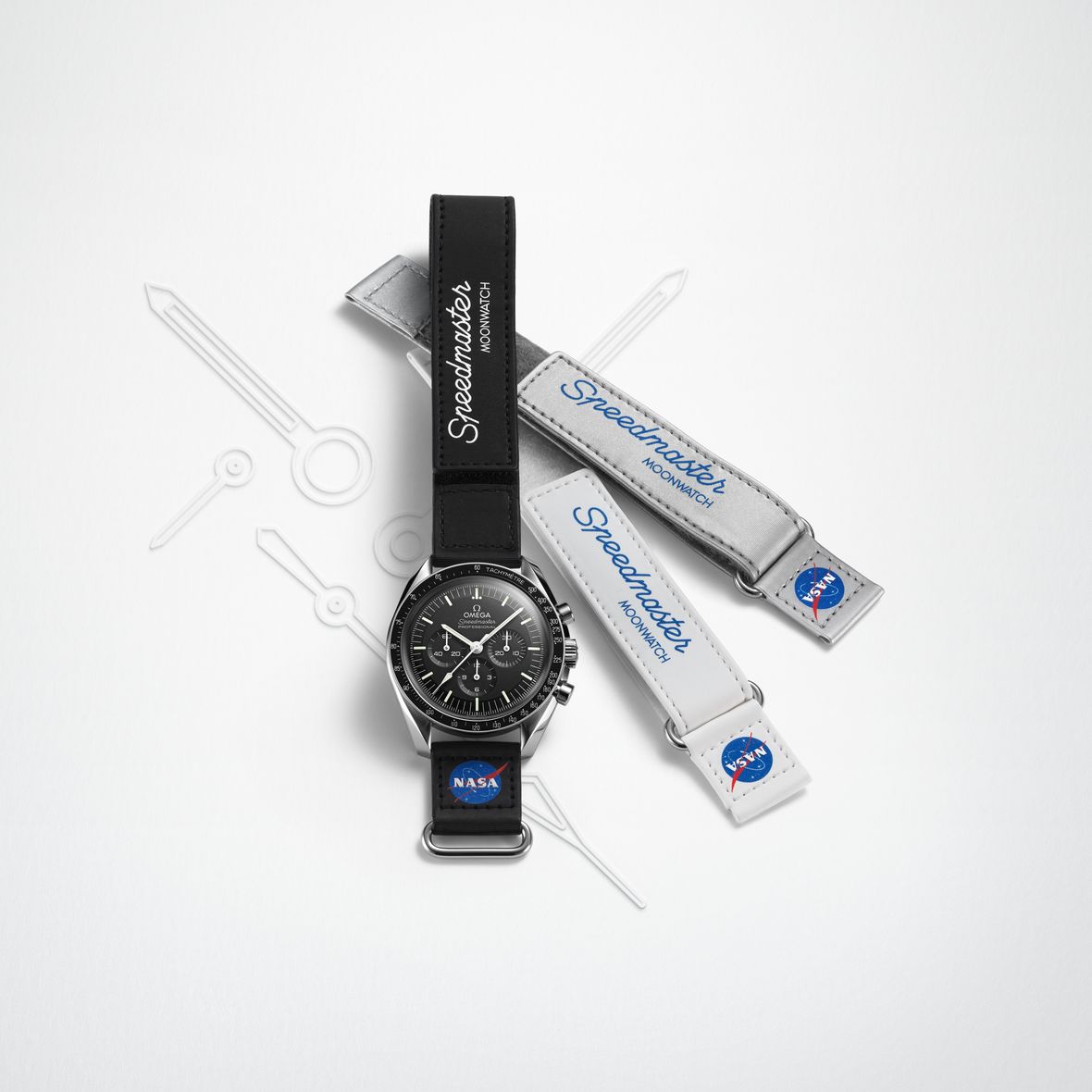