Grab A Drink And Pore Over the New Omega 2019 Releases

As some of you may know, Swiss watch conglomerate Swatch Group (Omega, Breguet, Blancpain, Longines, and others), announced last year that they would be pulling out of Baselworld – the watch industry’s largest trade show. Instead, Swatch Group held their own exhibition this spring called “Time To Move” and as expected, there were plenty of new watch models on display with Omega leading the pack. Here are a few of the highlights from the new Omega 2019 watch releases, including a new Omega Speedmaster, a few Seamaster watches, and one that left us scratching our heads (and reaching for a stiff drink). 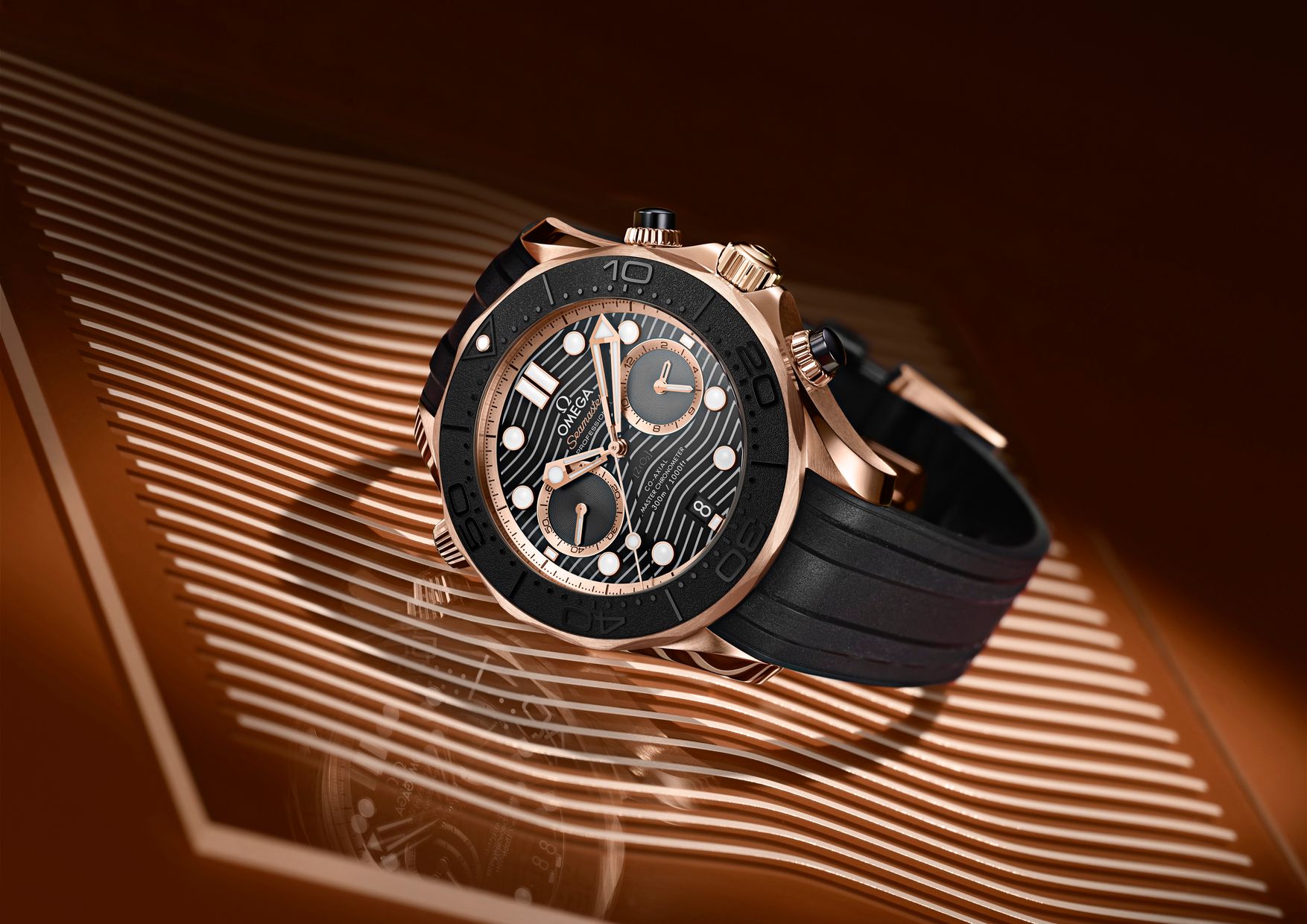 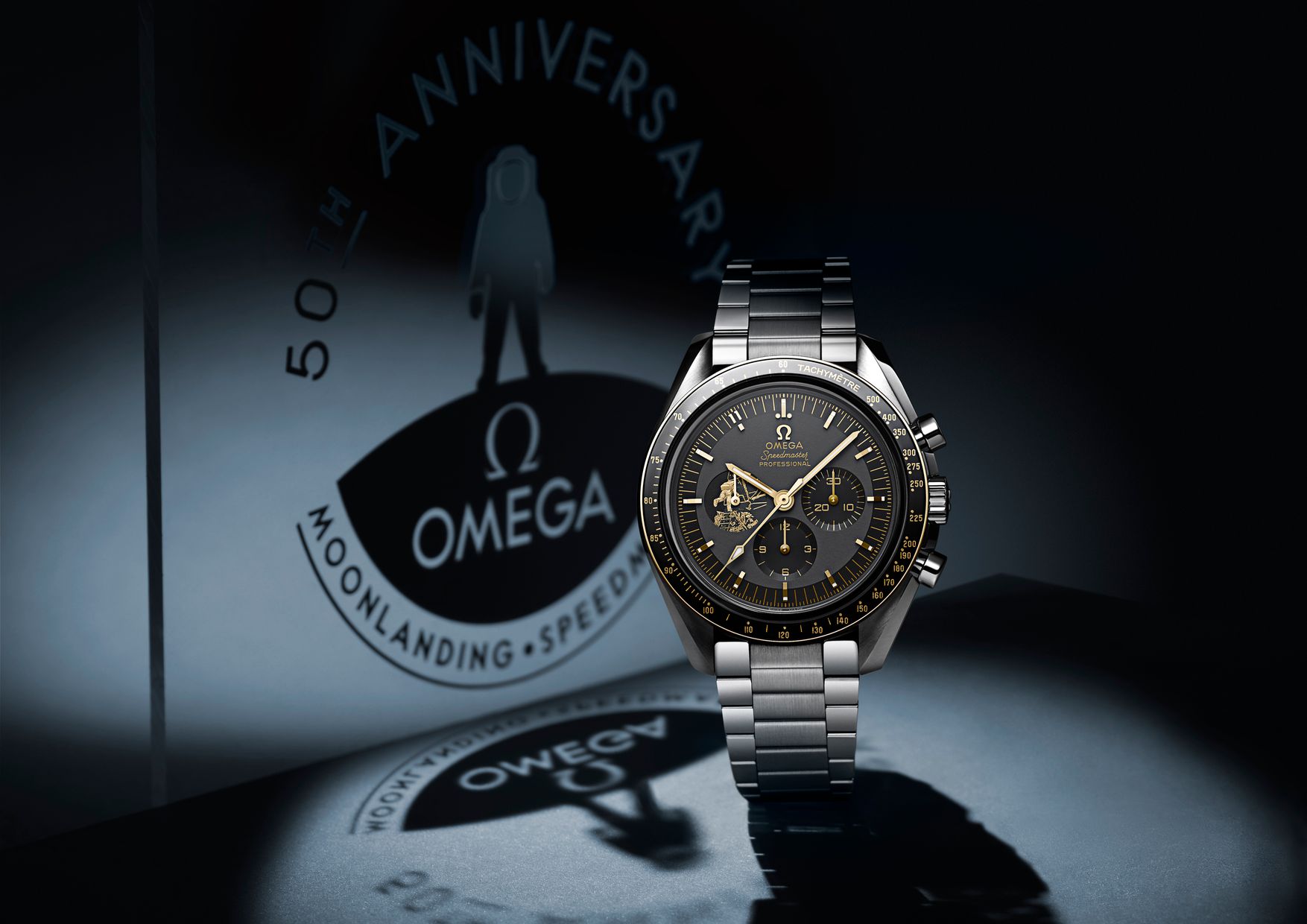 As 2019 marks the 50th anniversary of the lunar landing, it comes as no surprise that Omega is focused on reminding the public that it was the Speedmaster Professional that NASA chose to accompany the astronauts to the moon. Naturally, Omega has been churning out tribute Moonwatches and here is the latest offering – the Omega Speedmaster Apollo 11 50th Anniversary Limited Edition (ref. 310.20.42.50.01.001), limited to 6,969 pieces.

The Speedmaster Apollo 11 50th Anniversary LE sports a 42mm steel case with a bezel craft from Omega’s proprietary 18K Moonshine gold (more pale in color than traditional yellow gold) and a black ceramic bezel insert. The dial includes a varnished gray center, which is home to three black sub-dials including one with a depiction of Buzz Aldrin climbing down from the Eagle to take his first moon steps. 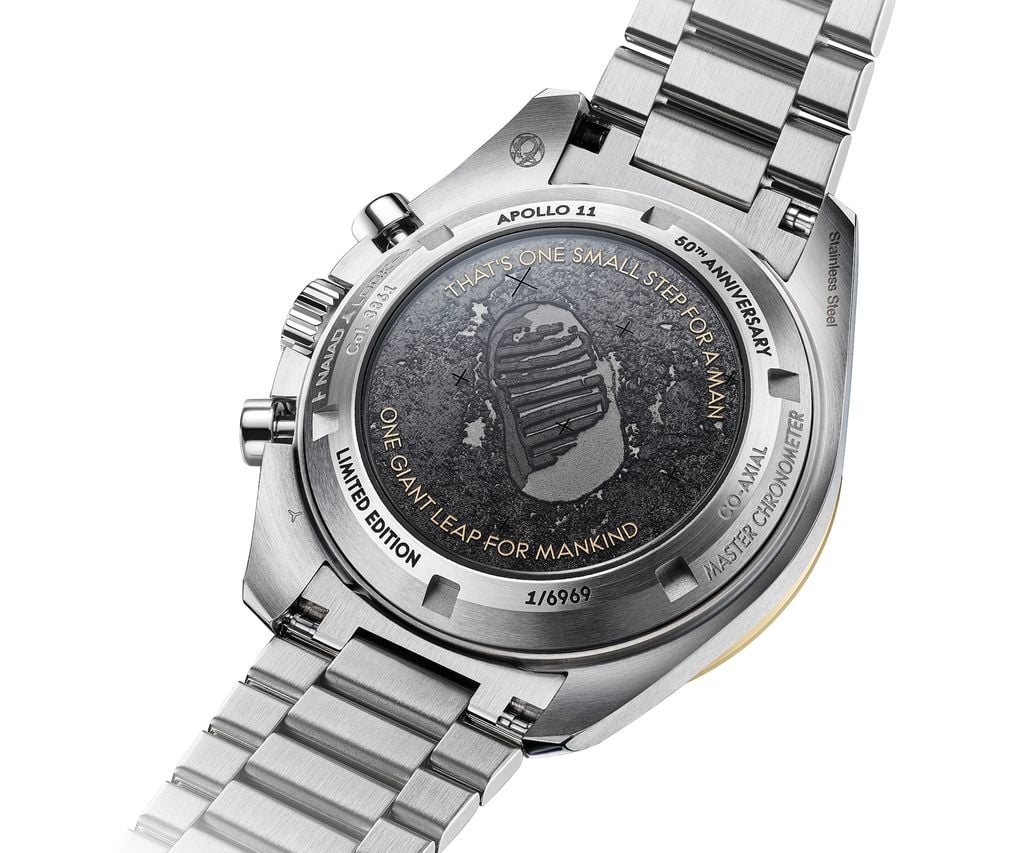 The dial also includes the vintage Omega logo as a tribute to the original Moonwatch, but PVD treated in Moonshine gold. On the caseback is an engraved footprint symbolizing humankind’s first step on the moon, encircled with the famed Armstrong quote: “THAT’S ONE SMALL STEP FOR A MAN, ONE GIANT LEAP FOR MANKIND.”

Similar to the gold Apollo tribute Speedmaster that Omega announced earlier this year, this version is also equipped with the hand-wound Caliber 3861. The new-generation Caliber 3861 follows in the footsteps of the famed 861 and 1861 movements, complete with Omega’s latest Master Chronometer rating. 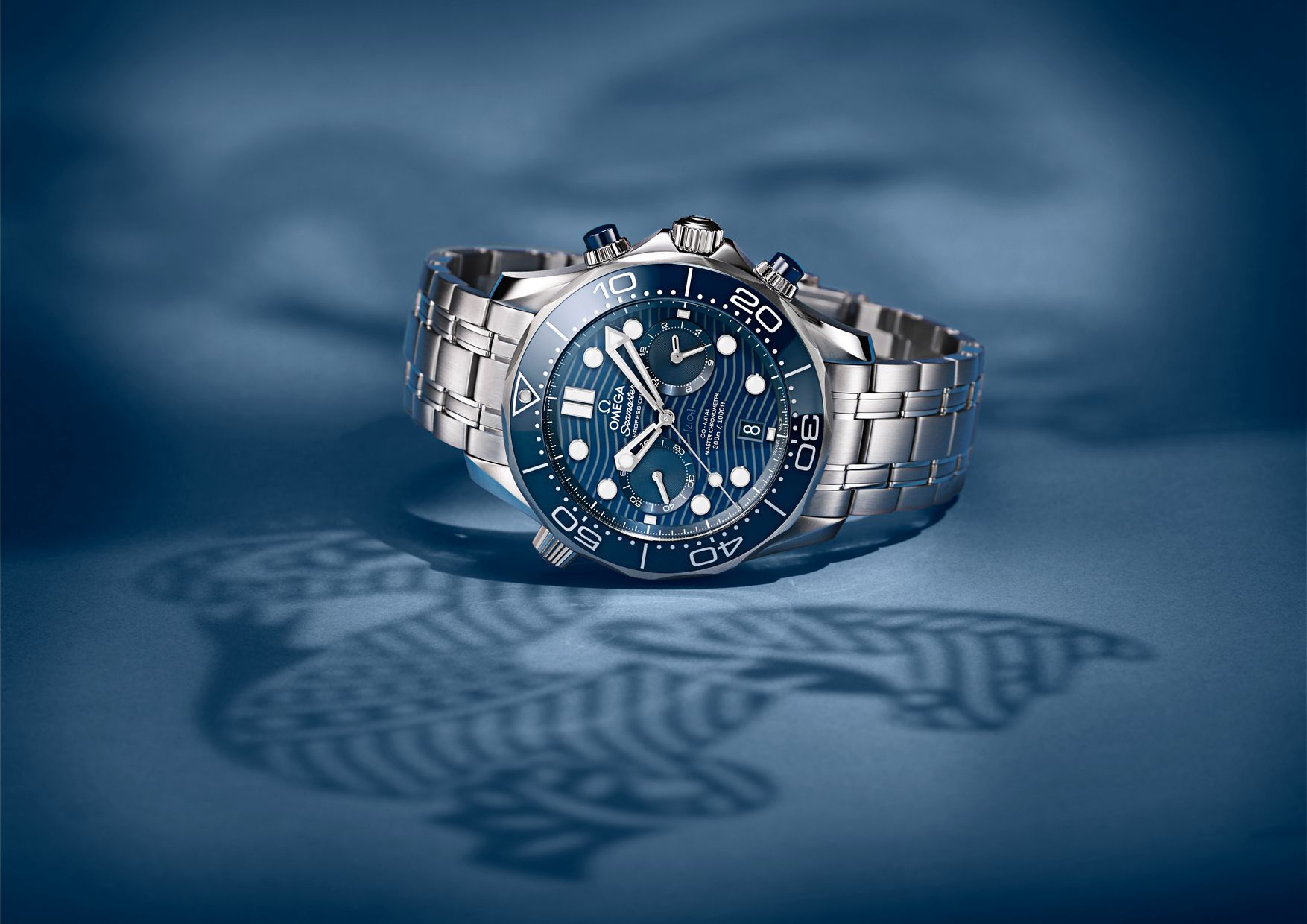 Joining the Omega 2019 catalog is a variety of different Seamaster Chronographs. (Image: Omega)

In 2018, Omega revamped its popular Seamaster Diver 300M lineup with notable enhancements and a slew of new models. And this year, the brand adds chronograph editions to the mix.

The new Omega Seamaster Diver 300M Chronograph features a 44mm case, unidirectional rotating bezel in ceramic, and a helium escape valve at 10 o’clock. In true Omega fashion, the new diving chronograph will be available in a range of materials including stainless steel, Sedna gold (Omega’s proprietary rose gold alloy), and a two-tone mix of both – not to mention the bezel and dial color choices and different strap options. 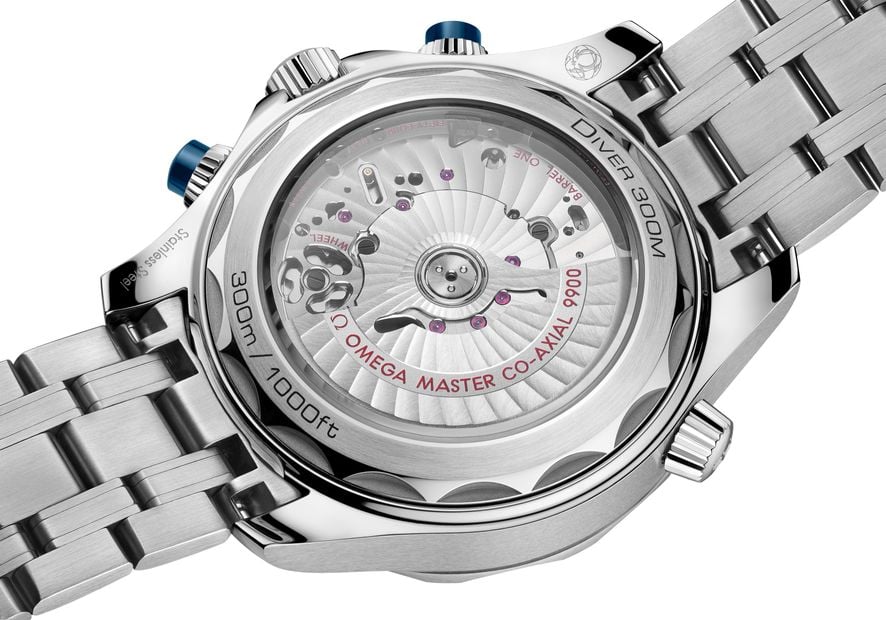 What does stay constant across all models is the wave pattern on the dial, topped with two registers at 3 and 9 o‘clock, and a date window at 6 o’clock. The sapphire caseback offers a view of the Omega Caliber 9900 (for steel and two-tone versions) or Caliber 9901 (for gold versions), both Master Chronometers with 60-hour power reserves and 15,000 gauss of magnetic resistance. 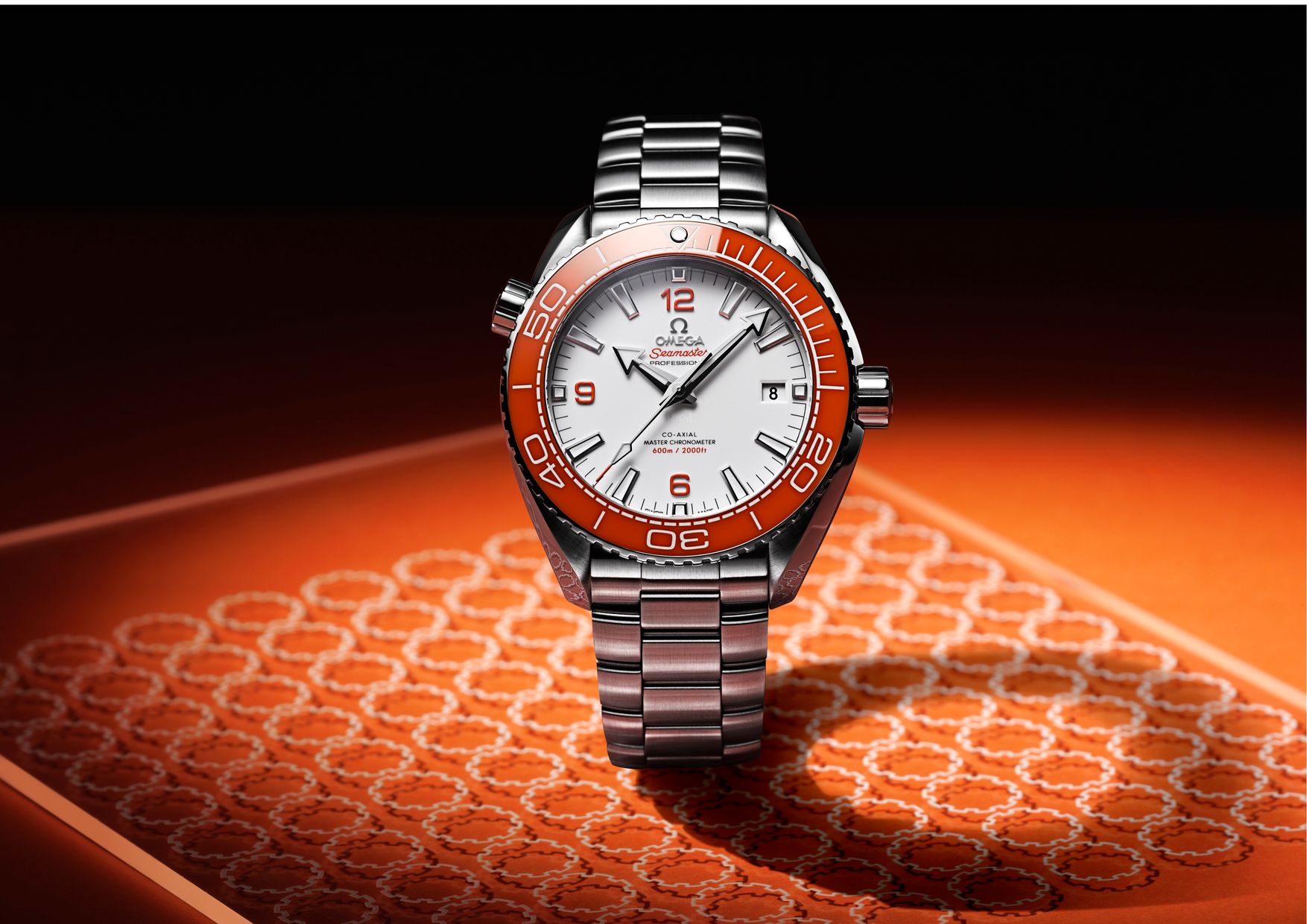 Orange makes another appearance in the 2019 Omega catalog, this time on the new Planet Ocean 600M. (Image: Omega)

With the new Planet Ocean 600M watch, Omega goes right back to the watch’s roots from 2005 by bringing back the bright orange bezel. The new 2019 Omega Seamaster Planet Ocean 600M includes a 43.5mm stainless steel case fitted with an orange ceramic bezel and the customary helium escape valve at 10 o’clock.

The fresh white dial is also fashioned from ceramic and provides a striking contrast to the orange-varnished numerals at 6, 9, and 12. And in case you thought there wasn’t enough orange on the watch, look to the tip of the seconds hand and the Seamaster text for more. 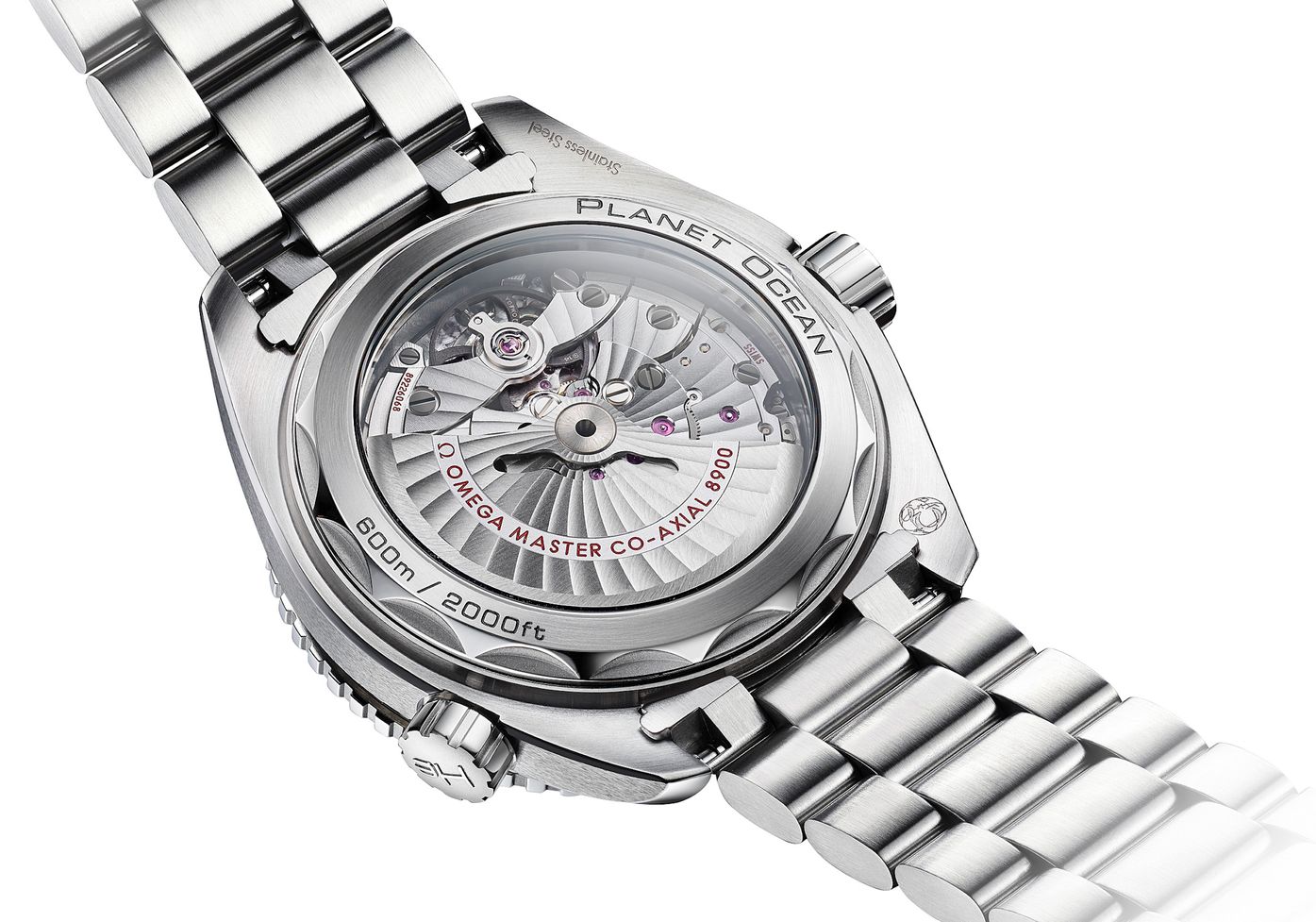 Yet again, the sapphire caseback allows a glimpse of the Master Chronometer Caliber 8900, which is decorated with arabesque Geneva stripes. 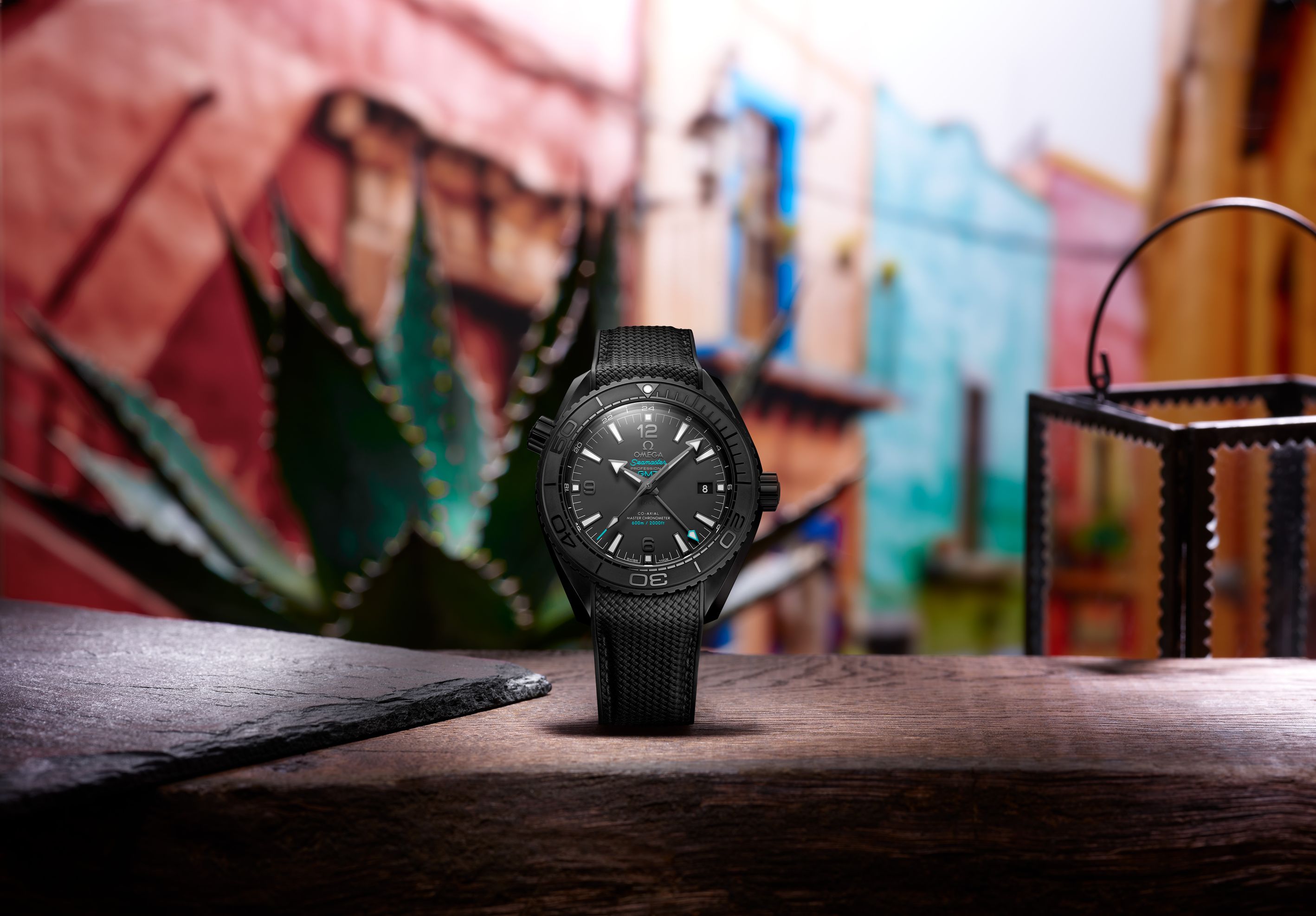 Easily the most unexpected addition to the Omega 2019 catalog is the Casamigos edition Planet Ocean GMT. (Image: Omega)

Ok, so this watch did not appear with the other new Omega 2019 watches at the “Time To Move” event since it is actually a US exclusive release (limited to just 80 pieces), but we couldn’t pass up a mention of this unusual brand collaboration. So what does a Swiss watch manufacturer have to do with tequila and mezcal made in the Highlands of Jalisco, Mexico?

Well, back in 2013, George Clooney (an official brand ambassador of Omega), Rande Gerber (who happens to be married to Omega brand ambassador Cindy Crawford), and Mike Meldman decided that they would make their own tequila for private consumption whilst on holiday in their homes in Los Cabos, Mexico. 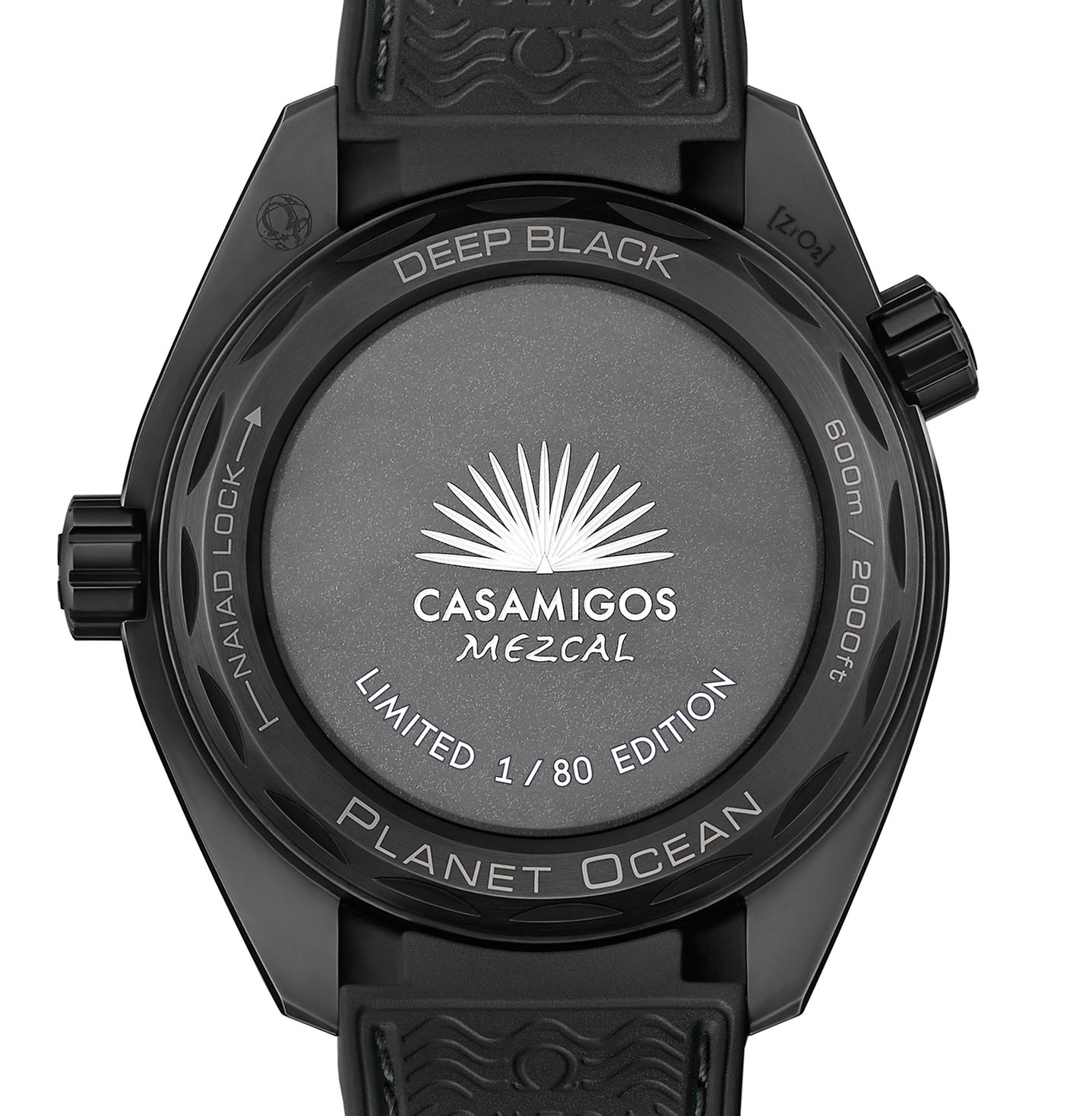 The dark sapphire caseback is intended to resemble the glass bottle of Casamigos Mezcal. (Image: Omega)

They called it “Casamigos” – taken from the Spanish words “casa” and “amigos” to create “house of friends.” Eventually, the company started selling the drink publicly, and Casamigos was ultimately sold in 2017 to UK-based Diageo for a reported $1 billion.

The watch itself is a Seamaster Planet Ocean “Deep Black” GMT with a 45.5mm black ceramic case, which apparently includes a matte texture inspired by the new Casamigos Mezcal drink. The tribute to the booze brand continues with teal markings on the dial (identical to Casamigos’ corporate color) and a dark sapphire crystal caseback resembling the Casamigos Mezcal bottle, which is emblazoned with a white lacquered Casamigos logo. 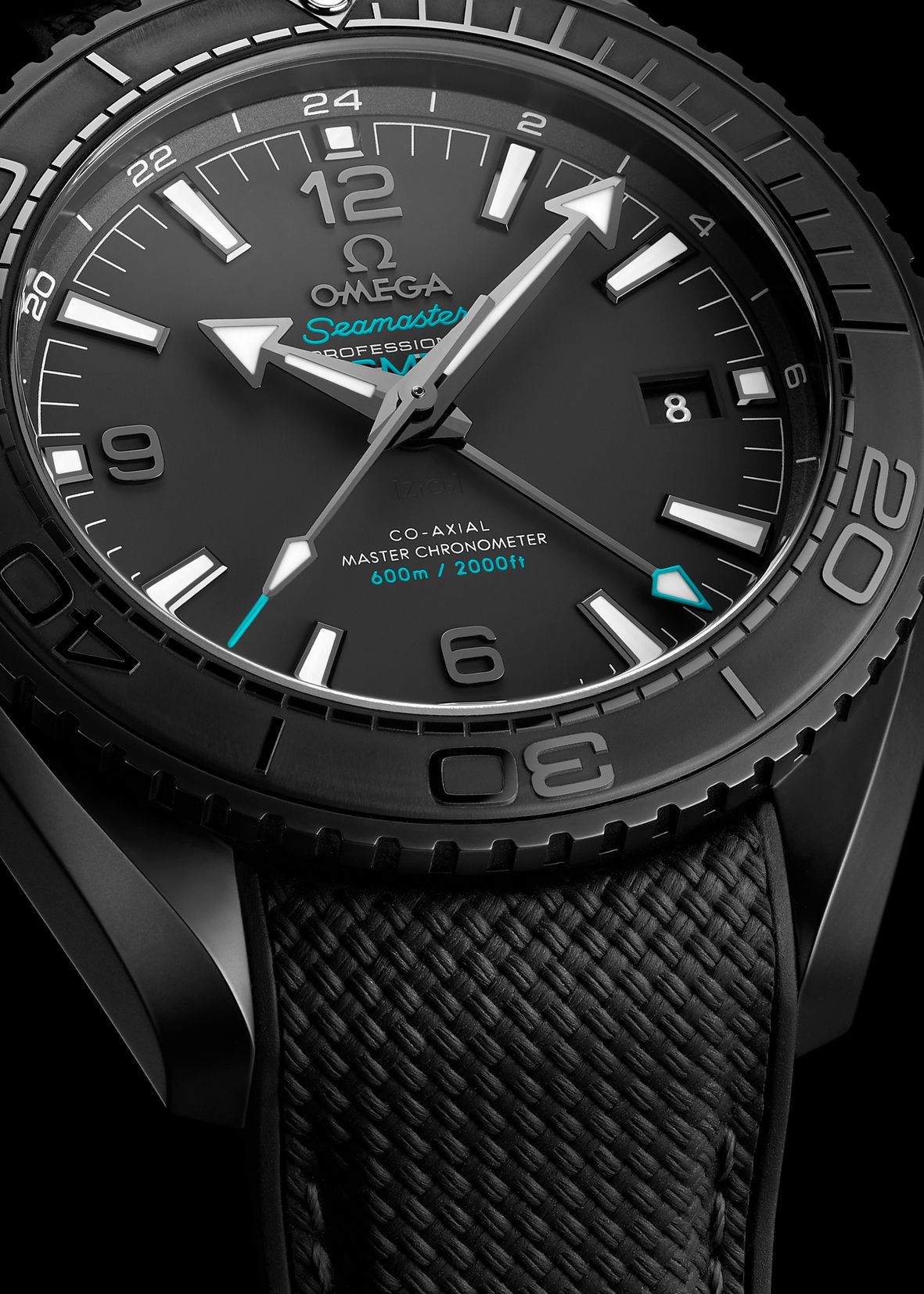 The dial and hands feature the signature teal color of the Casamigos brand. (Image: Omega)