Before there was TAG Heuer, there was Heuer. And in the 1960s and 1970s, Heuer gave us a host of iconic racing chronographs such as the Carrera, the Autavia, and the Monaco. However, there are some lesser-known but equally fascinating models that are deserving of some attention too. Join us as we highlight the vintage Heuer Montreal 110.503NC. 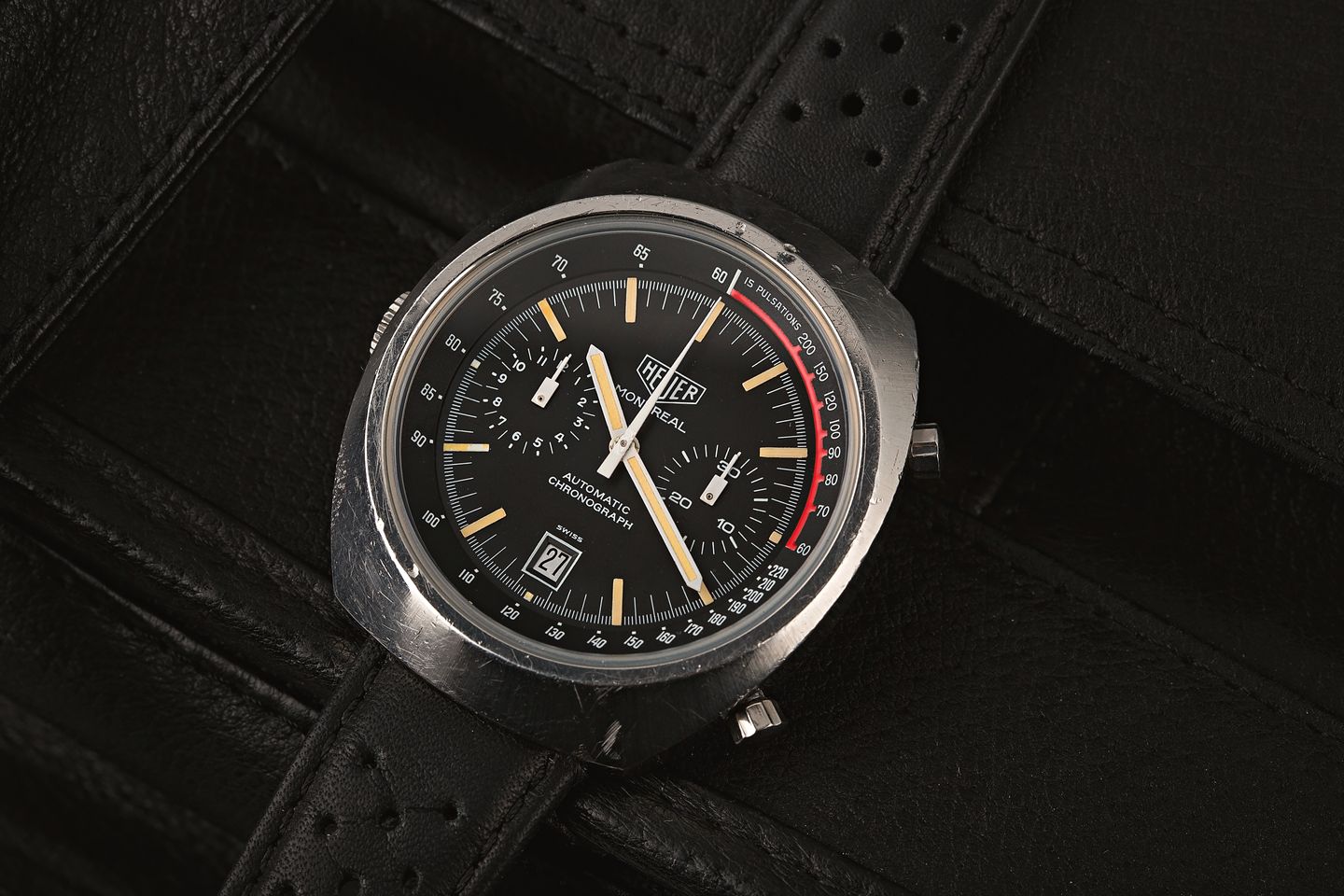 The Birth of the Heuer Montreal

The Heuer Montreal watch made its debut in 1972 and its silhouette is indicative of its era. Not only does the cushion-shaped case measure an oversized 42mm, but it also houses a contrasting round dial for an intriguing design detail. Also note the placement of the chronograph pushers on the right-hand side of the case, while the winding crown sits on the left of the case – a telltale sign of the movement inside. 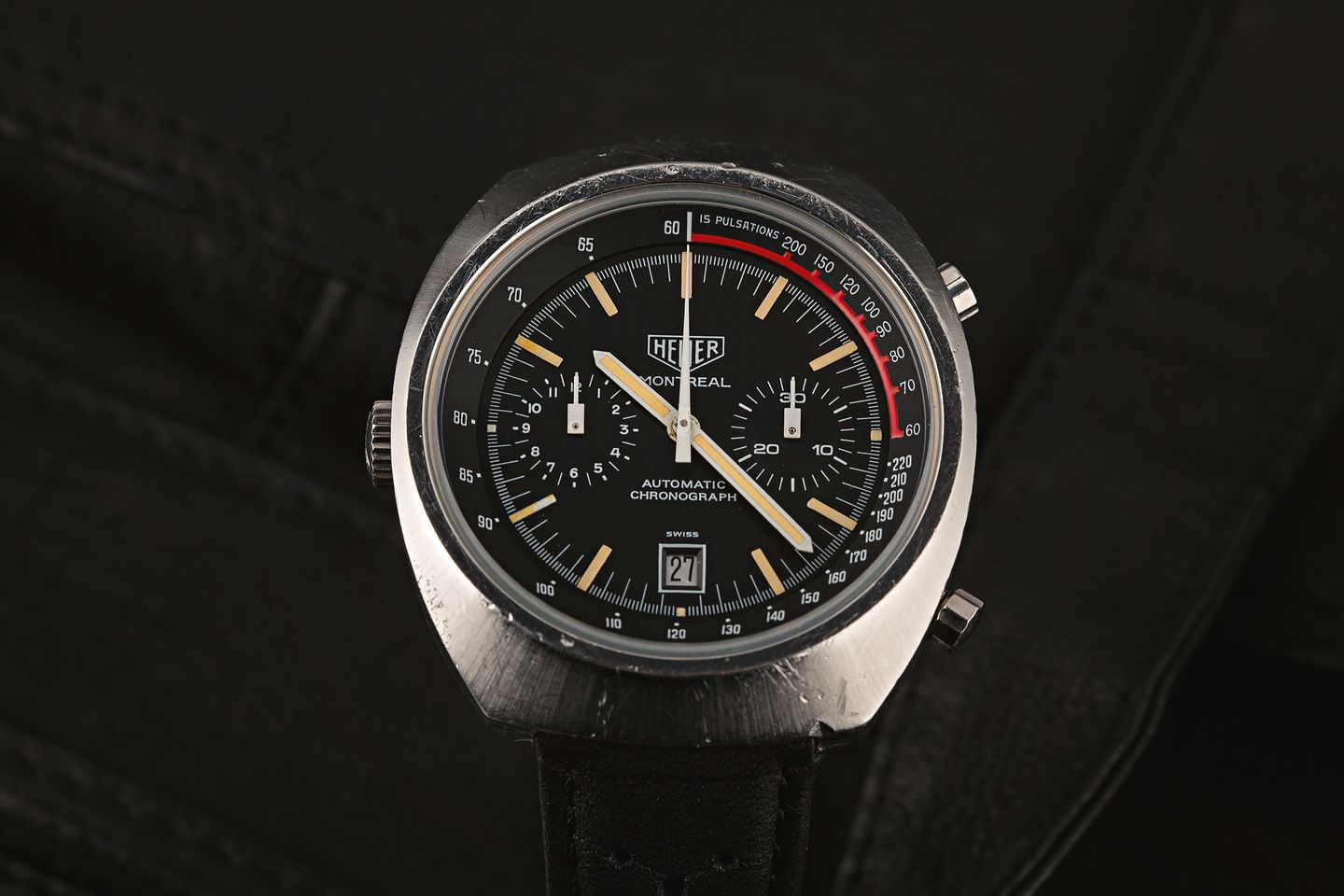 The first generation of the Montreal watches were all equipped with Heuer’s famous Caliber 12 movement. Heuer, Breitling, Hamilton-Buren, and Dubois-Depraz joined forces to introduce the Caliber 11 – one of the world’s first automatic chronograph movements (some say the first) in 1969. However, due to some mechanical issues, Heuer presented the improved and higher-beat Caliber 12 movement in 1971.

The dial of the Heuer Montreal chronograph uses the traditional bi-compax layout with two subsidiary dials. There’s the 30-minute recorder at 3 o’clock and the 12-hour recorder at 9 o’clock; there is also a date window at 6 o’clock. 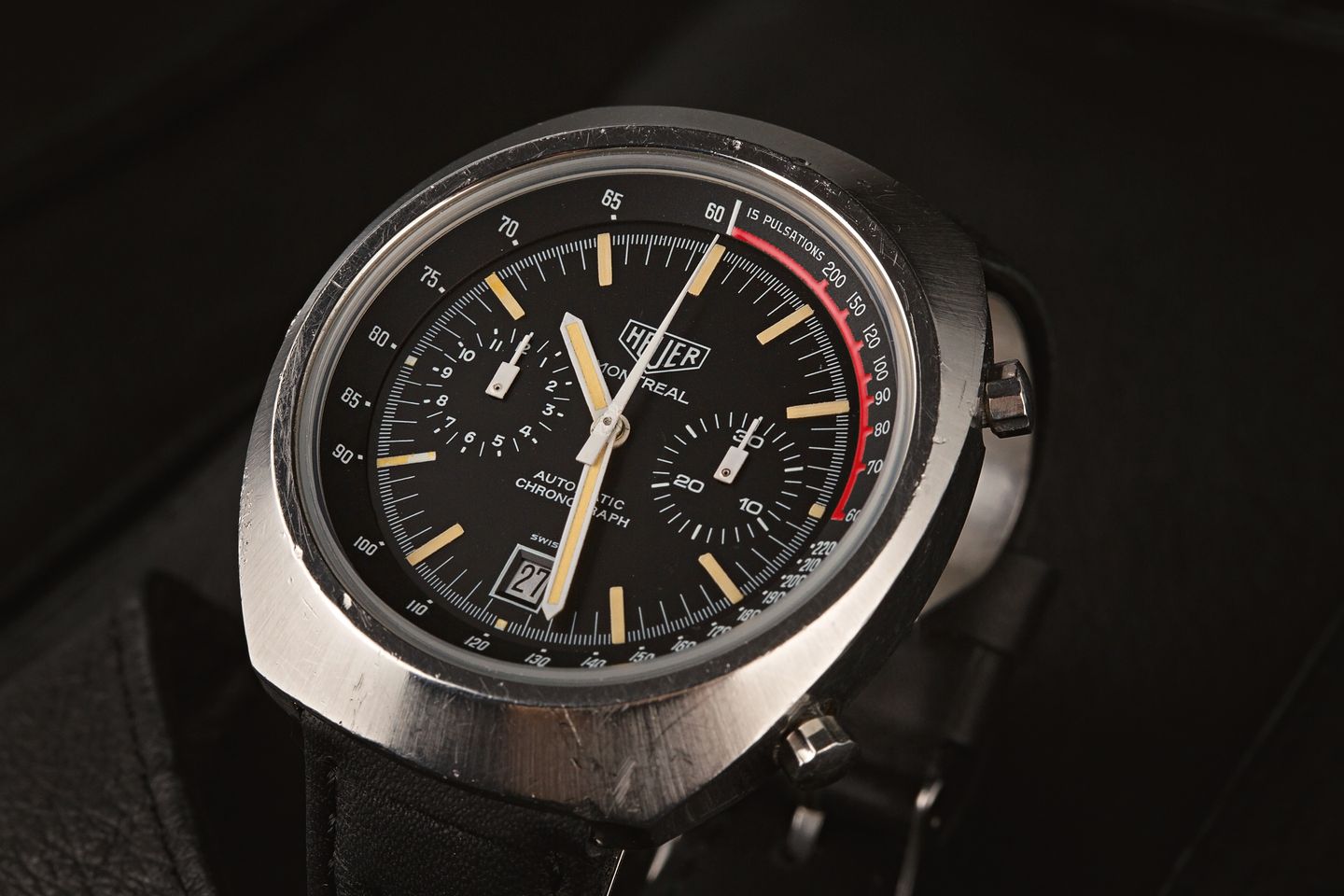 Look closely, and you will find two scales along the periphery of the dial – a pulsations scale and a tachymeter scale. This clever combination means that the Heuer Montreal can be useful both in the doctor’s office to measure a pulse, and at the racetrack to measure speeds and distances.

There are steel and gold-plated versions of the Montreal, along with a range of dial options including white, blue, champagne, and black. Heuer only produced the first series of the Montreal with the Caliber 12 movement for about four years until it was replaced with the second series, which used a Valjoux movement instead. 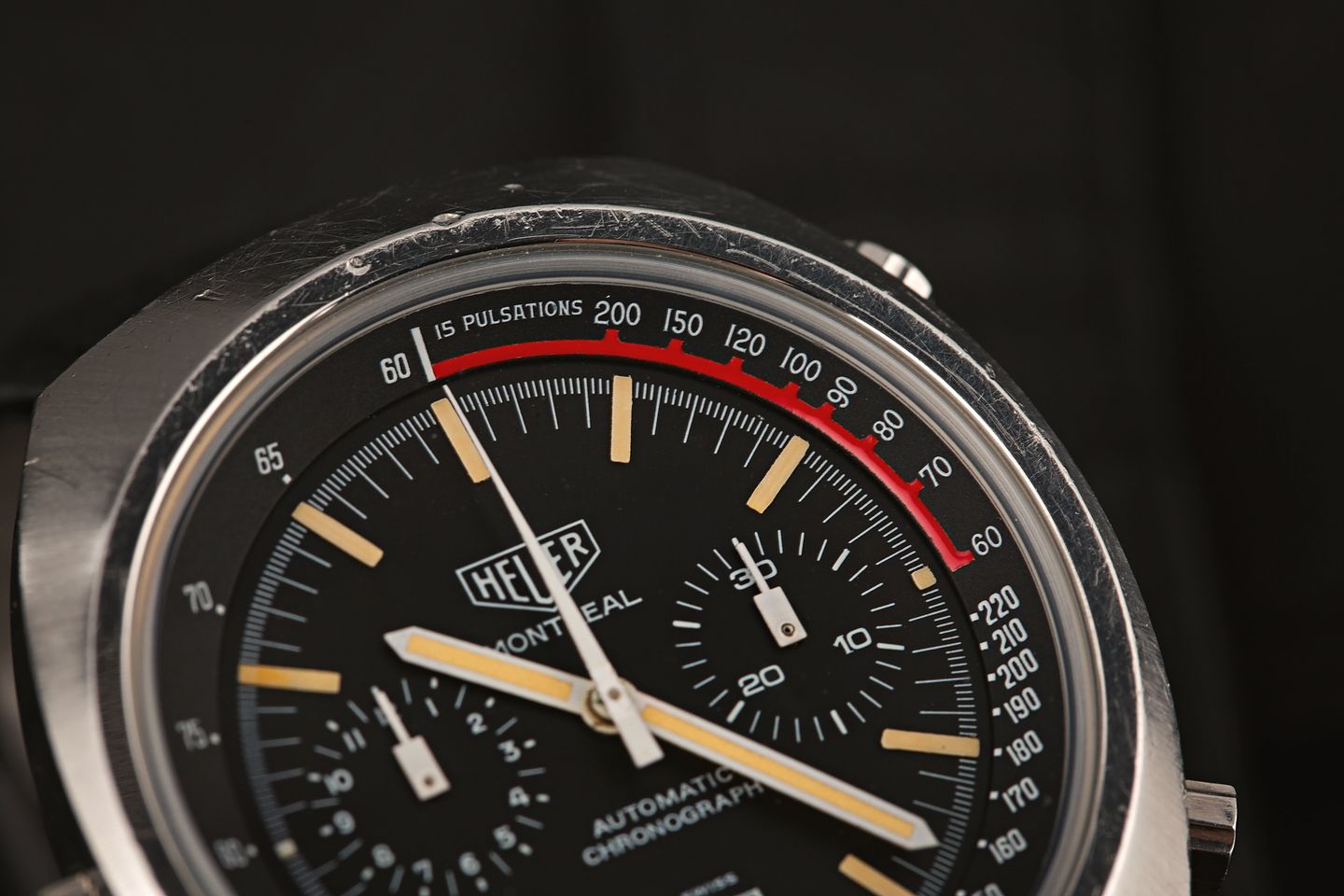 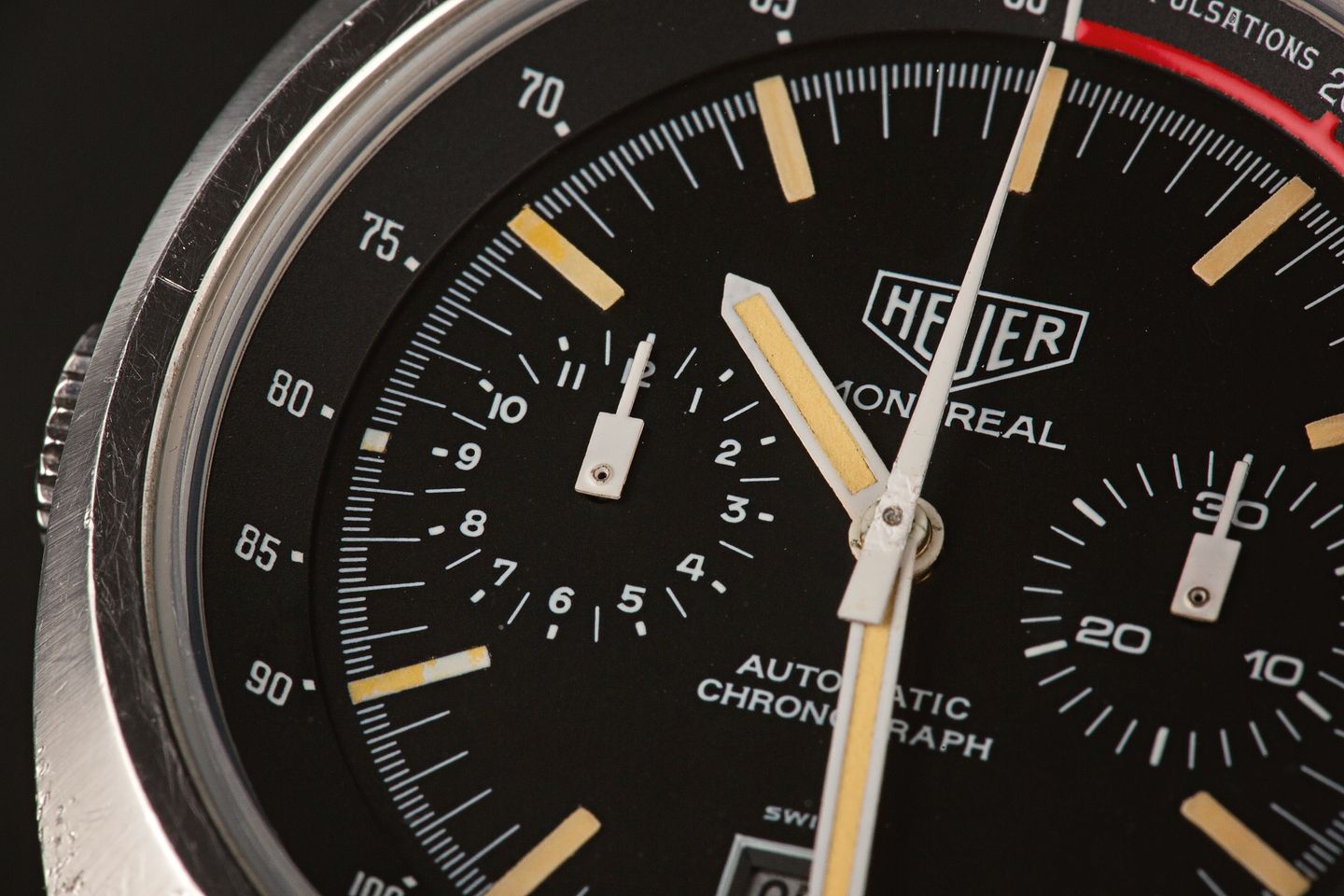 The sporty black dial mainly features white details; however there is a flash of red on the pulsation scale that adds a pop of color. Due to the age of these watches, the tritium lume used on the center hands and stick indexes has darkened over the years, which is also known as a “patina” among vintage watch collectors.

A solid example of 1970’s Heuer chronographs, the Montreal ref. 110.503NC is an excellent choice if you are looking for a vintage piece that is less ubiquitous, but just as appealing as the  Carrera, Autavia, or Monaco. 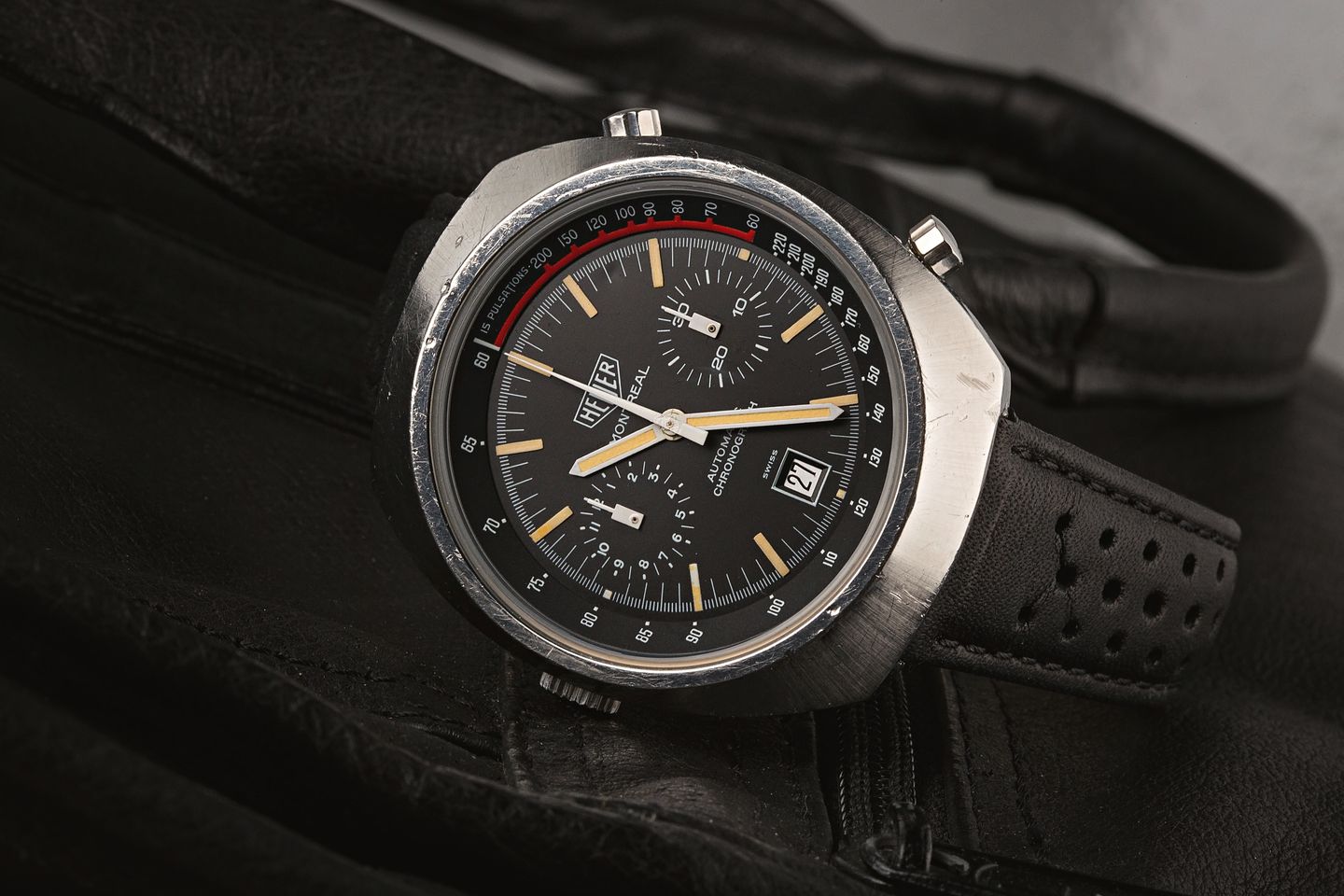