Omega has been the official watch of the James Bond movie franchise since GoldenEye in 1995, with the Seamaster being the model chosen for 007. Omega is celebrating some important milestones in the ultimate secret agent’s “life” – the 50th anniversary of You Only Live Twice; the 40th anniversary of The Spy Who Loved Me; and the 20th anniversary of Tomorrow Never Dies – with a new Ltd. Edition Seamaster Diver 300M “Commander’s Watch”. 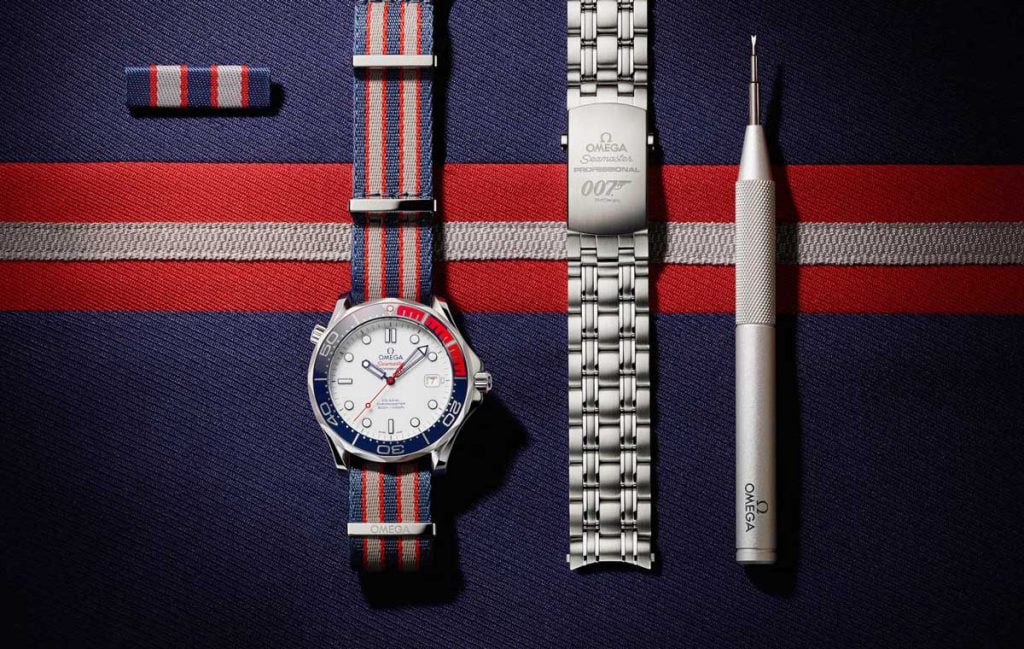 OMEGA has come out with the Commander’s Watch to celebrate Bond’s long history.

This newly added watch to the great OMEGA collection has people turning heads for a few reasons. The watch is cased in stainless steel, it features the Royal Navy’s ensign colors with a polished white ceramic dial, facetted blue skeleton hour-minute hands and a varnished red second hand with a “007” gun logo. It’s presented on a 5-stripe blue, red and grey NATO strap as well as an extra steel bracelet and comes with a campaign ribbon in the same pattern. The timepiece is powered by the exclusive OMEGA Calibre 2507. 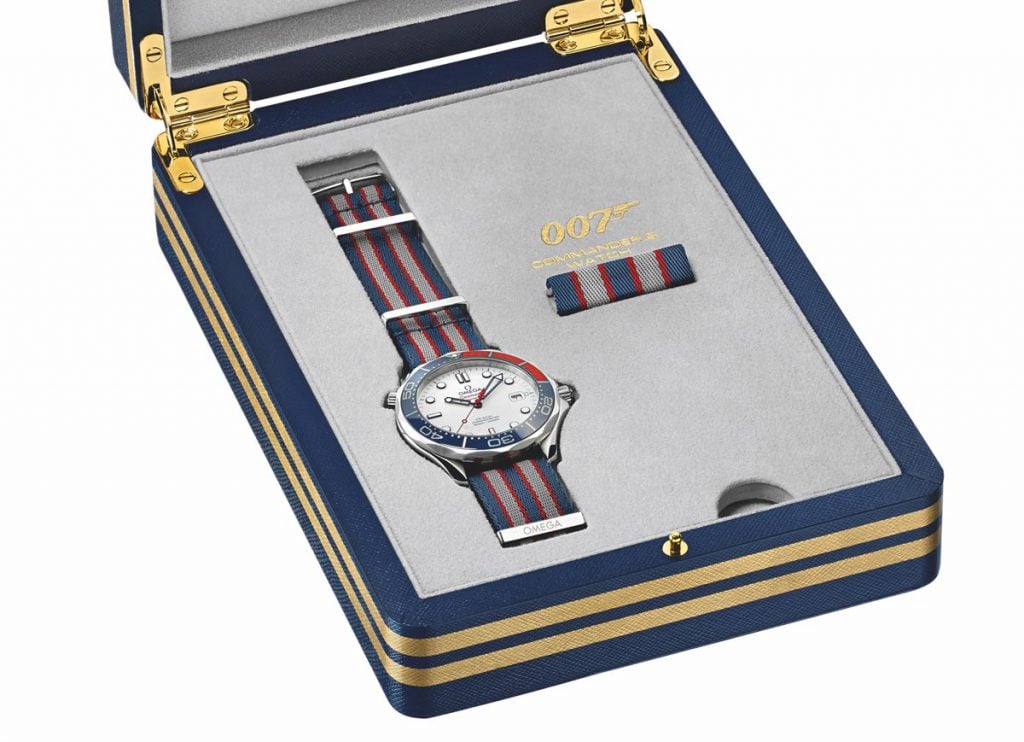 The OMEGA Commander’s Watch comes with a few things.

The Commander’s Watch is Already Set for Auction

At a special auction later in 2017, three even more exclusive examples of the Seamaster Diver 300M “Commander’s Watch” Limited Edition models will be sold, with all proceeds going to selected charities: one in stainless steel, one in 18K yellow gold and one in 18K white gold – all series #007. There has been no indication that the Commander’s Watch is the one Daniel Craig will wear in “Bond 25”, rumored to be his last appearance as 007 though nothing’s been confirmed at this point including the release date. Craig has said he’s no longer interested in playing Bond despite the eye-popping paycheck, and he was noticeably absent from the celebration for the new limited edition watch that Omega just threw in London. If a new actor takes up the role it’s possible producers will want a new watch for him as well; we’re sure Jean-Claude Biver at Zenith / LVMH would offer a juicy product placement deal. 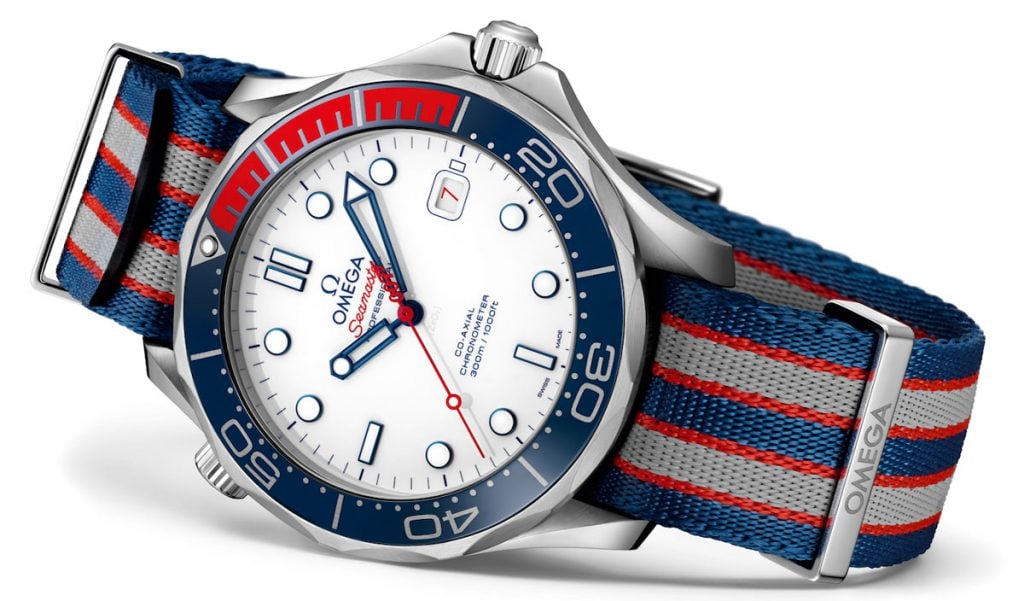 The Commander’s Watch comes on a NATO strap.

OMEGA is at pains to point out that the Seamaster is the right watch for Bond. They note that a special consignment of Seamaster 300s was delivered to the British MoD (Ministry of Defence) for issue to certain elite Navy units in 1967. Bond’s Commander rank is of course granted by the Royal Navy. During World War II Omega delivered more than 110,000 pilots’, navigators’ and soldiers’ watches to the MoD in all. That actually means that more than 50% of all of Switzerland’s watch deliveries to the United Kingdom during the war came from Omega alone. This despite the fact that a relatively small number of British military Rolex Submariners are far more famous; they inspired the Subs worn by Sean Connery in the early Bond flicks. 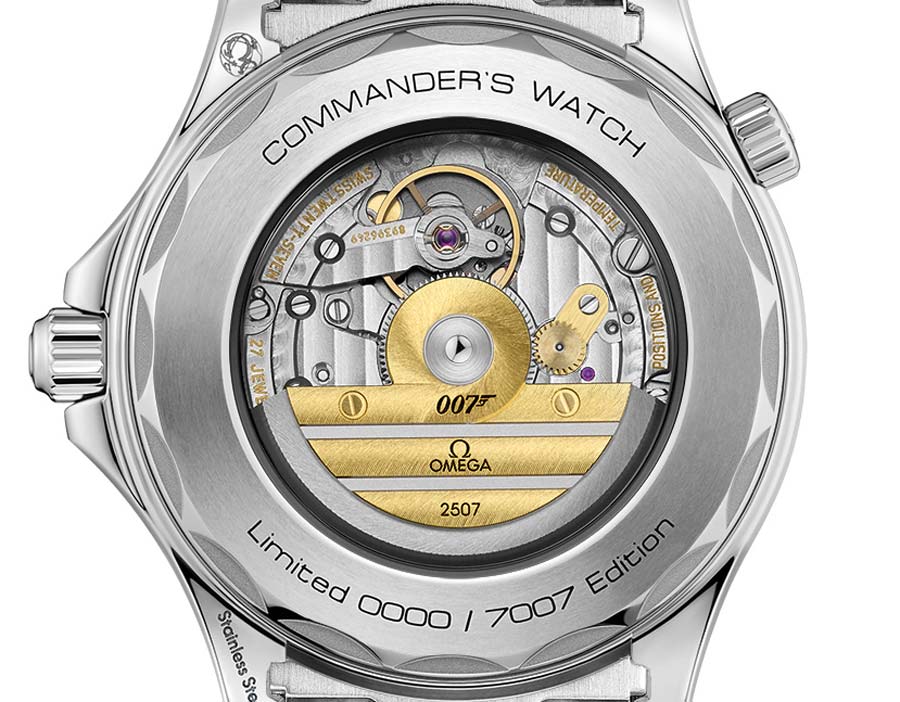 The Commander’s Watch is a one of a kind watch that will sell out quickly.

Why OMEGA and Not Rolex

It was Lindy Hemming, the costume designer on GoldenEye (1995), Tomorrow Never Dies (1997), The World Is Not Enough (1999), Die Another Day (2002) and Casino Royale (2006), who first proposed that 007 should wear an Omega. “My father had been in the RAF (Royal Air Force) but was friendly with navy men and I remember as a child one often visiting us, and he always wore an Omega which fascinated me – this unusually sporty design that looked as though it was built for purpose. It’s the small details that really matter. So as one of the early tasks in designing the new Bond [in 1995], I went to a props meeting and argued for the use of Omega. I was convinced that Commander Bond, a naval man, a diver, and a discreet gentleman of the world would wear this watch as opposed to the one everyone expected me to use.“ Also, of course, Omega was no doubt willing to pay for the privilege while Rolex was not.