Those familiar with the Rolex Air King collection have likely browsed plenty of popular models. While a number of these references are common for collectors to have heard of it’s safe to say that fewer are familiar with the Domino’s Rolex, which isn’t a nickname coined because of a particular color or style, but rather the label given to Rolex watches made especially for the giant pizza chain.

This merging of two incredibly different brands, where one represents affluence and the other affordability, may surprise some as it is hardly the most expected pairing. However, Domino’s Pizza has been ordering custom Rolex watches from the Swiss watchmaking giant for more than 40 years. 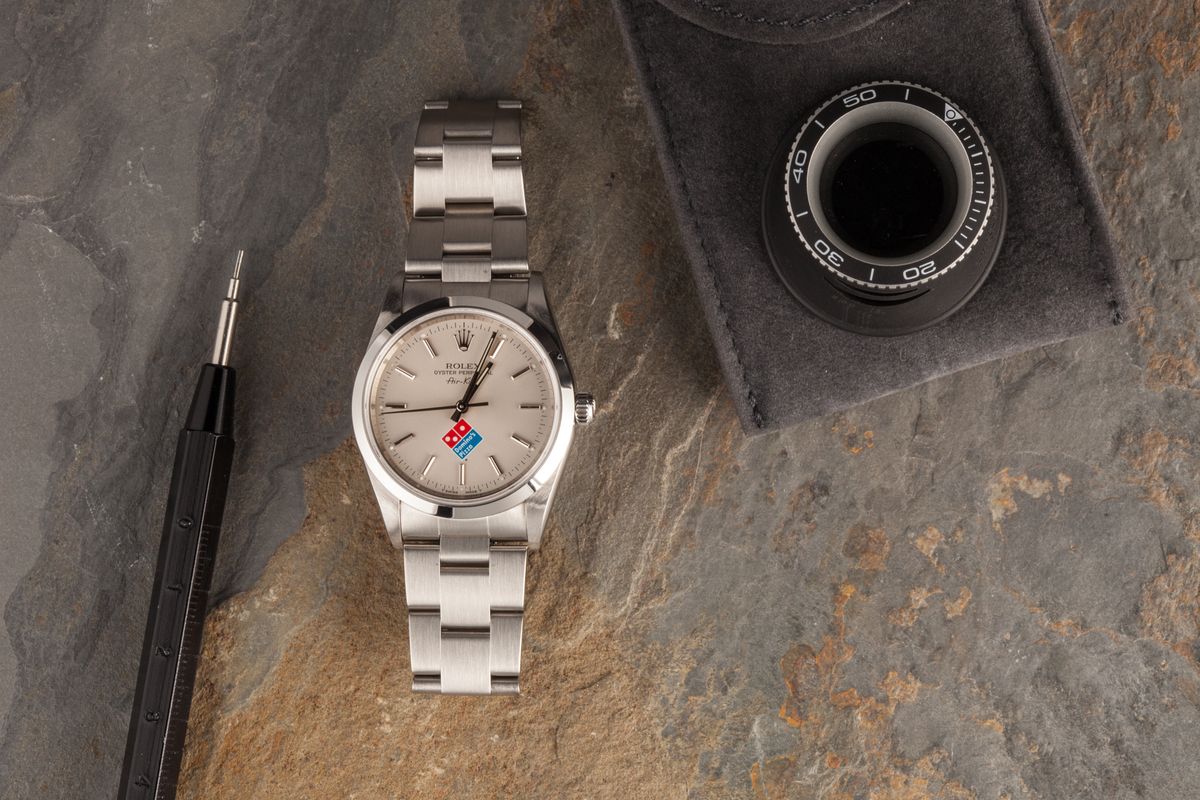 History of the Domino’s Rolex

Tom Monaghan, the founder of Domino’s Pizza, revealed the origins of the Domino’s Rolex watch in his 1986 autobiography, Pizza Tiger. He wrote, “I started giving away watches in 1977, when I wore a Bulova with our Domino’s logo on its face. A franchisee asked what he had to do to get that watch from me, and I told him, ‘Turn in a twenty-thousand-dollar sales week.’ He did it, and for the next few years I gave away several Seikos and after that hundreds of $800 Rolex watches.”

The Rolex watches he mentioned were in fact, the Air-King ref. 5500. With its stainless steel 34mm Oyster case, steel Oyster bracelet, and time-only dial, the Air-King 5500 is one of Rolex’s most understated watches. However, the vibrant Domino’s blue and red logo emblazoned on the dials of the Air-King watches awarded to high-achieving store managers makes the otherwise discreet Rolex stand out.

Monaghan understood that the chance to win a Rolex would be a fantastic motivator for store managers, so the pizza company set up the Domino’s Pizza Rolex Challenge. While the original way to win a Domino’s branded Rolex was to hit $20,000 a week in sales, the targets became more ambitious as the pizza chain grew. Additionally, as Rolex’s catalog has also changed, Domino’s branding has not only appeared on various watches but also in different forms over the years. And yes, the Domino’s Pizza Rolex Challenge is still going on today with the brand new Oyster Perpetual 36 ref. 12000 standing in as the coveted prize.

It’s important to emphasize that genuine Domino’s Rolex watches are not aftermarket pieces with custom branding done by Domino’s – these come straight from Rolex furnished with necessary logos, some even with paperwork stating “Domino’s Pizza” as the purchaser. 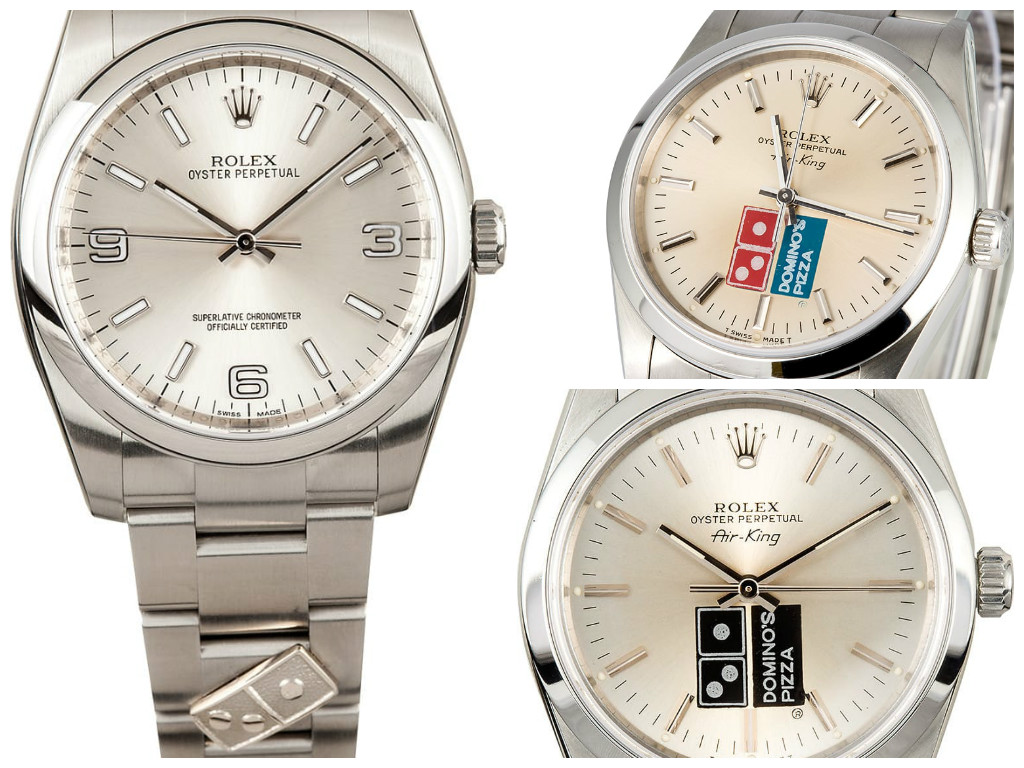 Features and Variations of the Domino’s Pizza Rolex

With a history that spans over four decades, there have been several variations of Domino’s branding on Rolex watches. For instance, earlier models included the Domino’s logo on the dial. There are examples with color logos (blue, red, and white) and black and white logos, in addition to larger logos, smaller logos, straight logos, and tilted logos.

Sometime in the mid-2000s, the Domino’s logo moved from the dial to the bracelet. The Domino’s logo, which is also fashioned from stainless steel, is attached to the first link (later, the second link) of the steel Oyster bracelet for a more discreet approach to the co-branding effort. There are examples with the full square Domino’s logo on the bracelet as well as models furnished with a simplified logo with just the domino piece without the name of the pizza brand. There are a few rare transitional examples from about 2003/2004 that have the logos on both the dial and the bracelet.

– Simplified Logo with No Name

Domin’’s Rolex watches typically have engravings on the caseback, which can also vary depending on the year they were awarded. Some have casebacks with the Domino’s logo, some have the initials of the awardee, some with the date and sales target (e.g. $20,000) achieved, and so on. 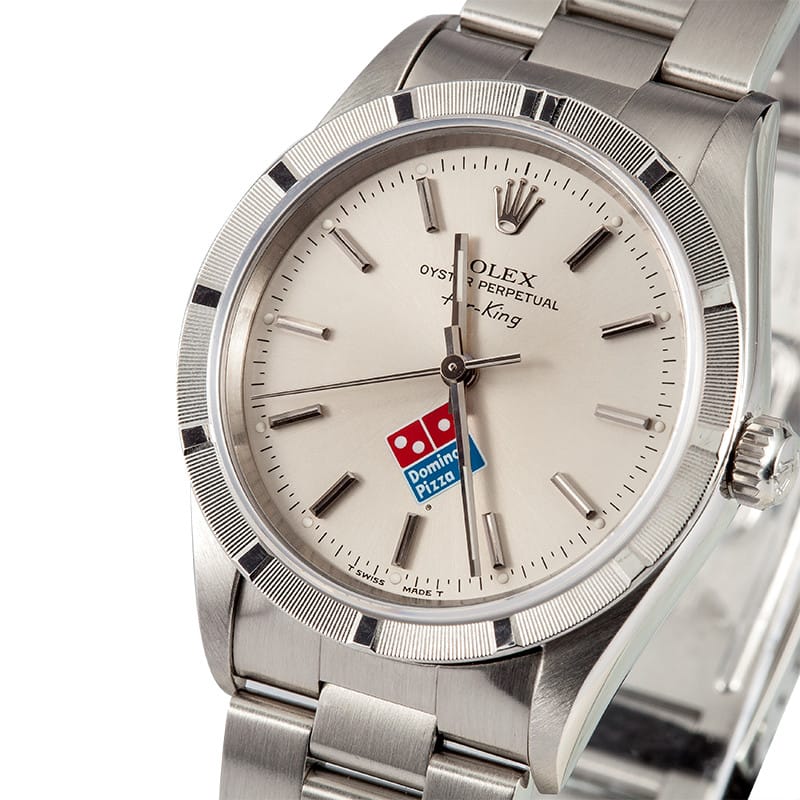 Which Rolex Watches Have Domino’s Branding?

Although all Domino’s Rolex watches have been stainless steel time-only watches, there have been various models used over the years including Air-King and Oyster Perpetual watches. As previously mentioned, the first Domino’s Pizza Rolex was the Air-King ref. 5500, which is one of Rolex’s longest-running models. 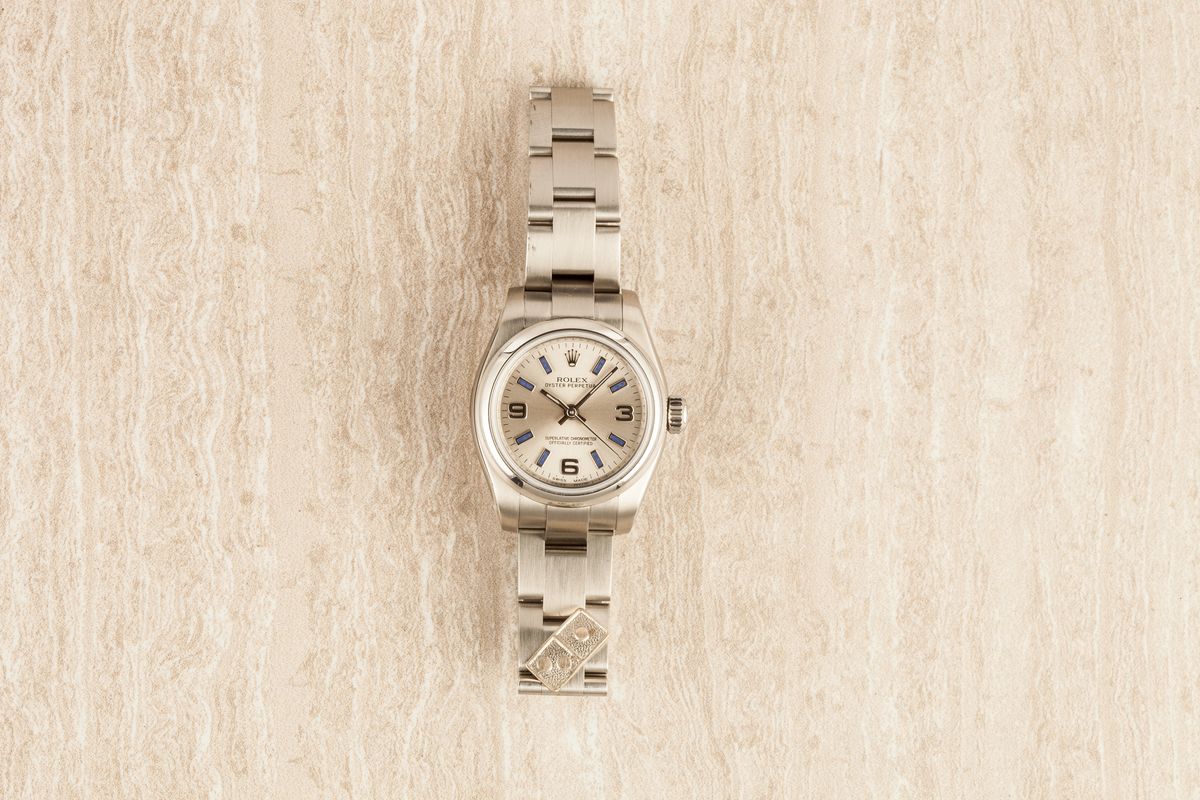 How Much Are Domino’s Rolex Watches?

With stainless steel cases and bracelets and simple three-handed dials, the Oyster Perpetual and discontinued Air-King references (not the current Air-King ref. 116900) have always been some of Rolex’s more affordable models. Historically, a pre-owned Domino’s Rolex watch sold anywhere between $3,000 and $6,000 depending on the specific reference and condition, with some collectors willing to pay a slight premium for the unusual branding. 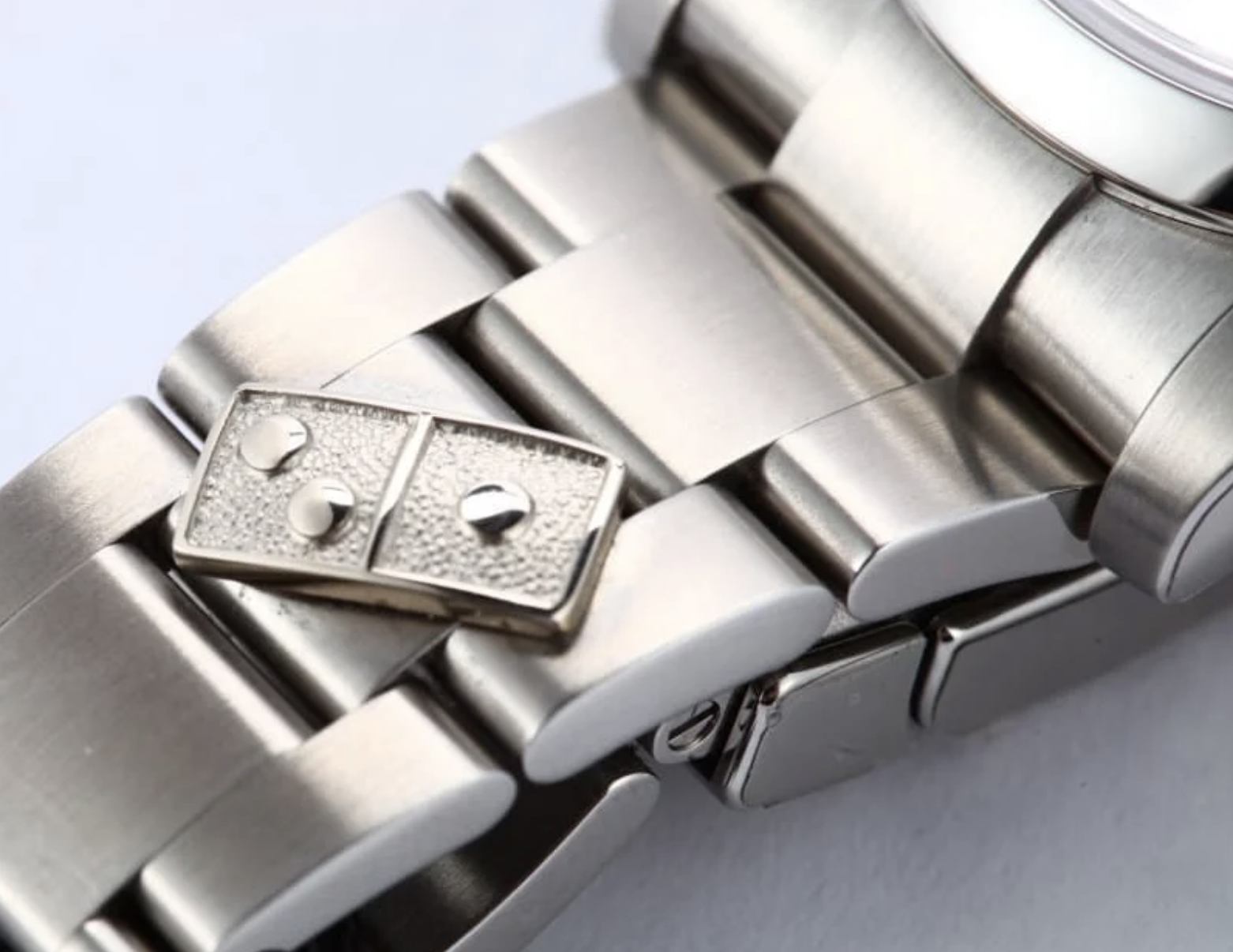 The Unique Rolex Watches Made for Domino’s Pizza

While there are several co-branded Rolex watches out there including Tiffany, Cartier, COMEX, Pan Am, and Chevrolet (just to name a few), the Domino’s Pizza ones stand out for several reasons. For instance, this has been a relationship that has endured for over 40 years and still continues today. Conversely, many of the other corporate co-branded Rolex watches were discontinued decades ago.

Furthermore, these Rolex watches are not what we traditionally think of corporate watches, such as those given after decades of service (like Coca-Cola and Winn-Dixie). Instead, the Domino’s Pizza Rolex watches are prizes offered on a regular basis for the highest-achieving members of the company.

Although some may turn their noses up at the curious co-branding of ultra-luxurious Rolex and mass-marketed Domino’s Pizza, it’s important to remember that these watches are symbols of hard work and incredible achievement on the part of the original recipient. As collectors we often talk about the story behind the watch and all Domino’s Rolex watches have a story of personal dedication and triumph. 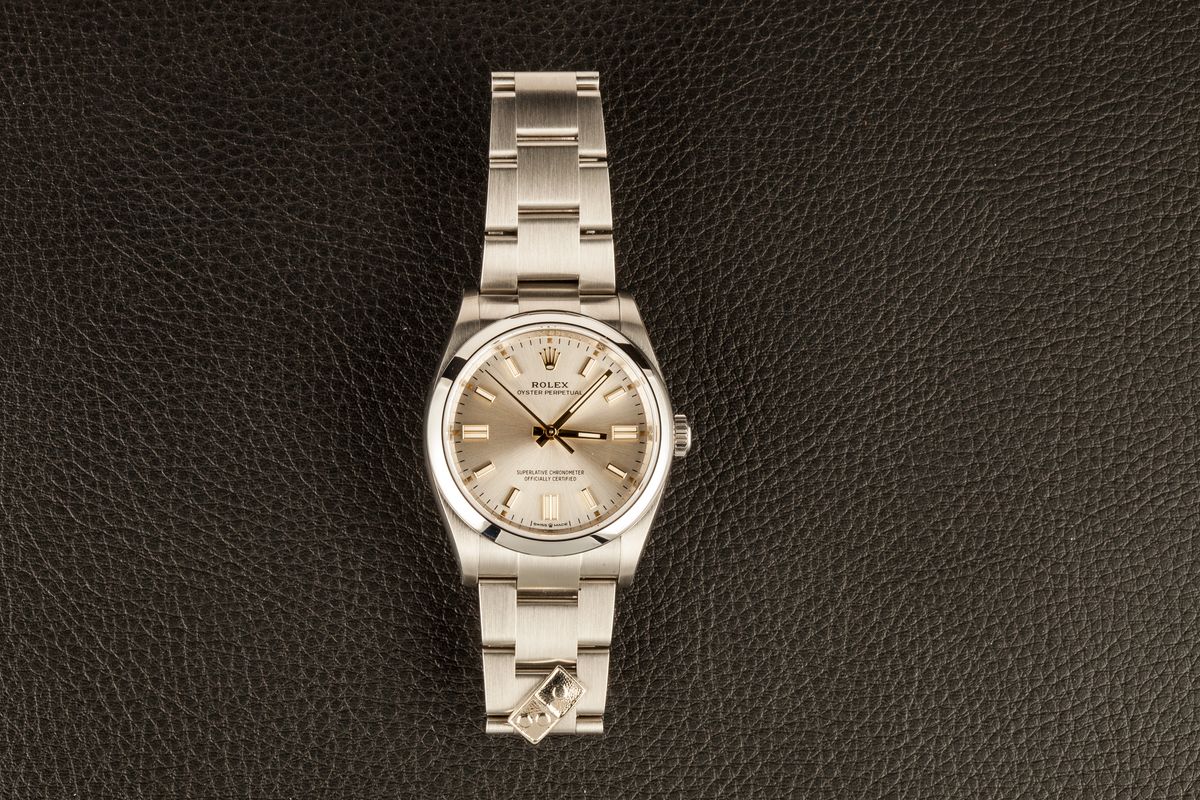 Previous Article Holiday Edition: Our Favorite Luxury Watch and Drink Pairings
Next Article The Best Dive Watches You Can Buy for Under $5k