It is widely acknowledged that a Rolex watch makes a sound investment, probably the soundest in the luxury goods world. Take ownership of just about any model in the brand’s comprehensive range and you can be reasonably assured that it will (at worst) hold its value and in most cases, even appreciate over the years. Of course, as with anything, some pieces will perform better than others and the trick for those looking to hedge their bets is being able to spot the ones destined for future greatness before the rest of the industry catches on to them.

Now, there is no exact science to spotting the future classics. It is virtually impossible to predict where the golden eggs are buried – otherwise, we would have all bought up armfuls of exotic dial ‘Paul Newman’ Daytona watches in the 1960s and be living the high life today. However. some of the current production models stand out so much that they have the ‘uniqueness’ factor to become future classics, and the Rolex Yacht-Master II 116689 might just be one of those watches. 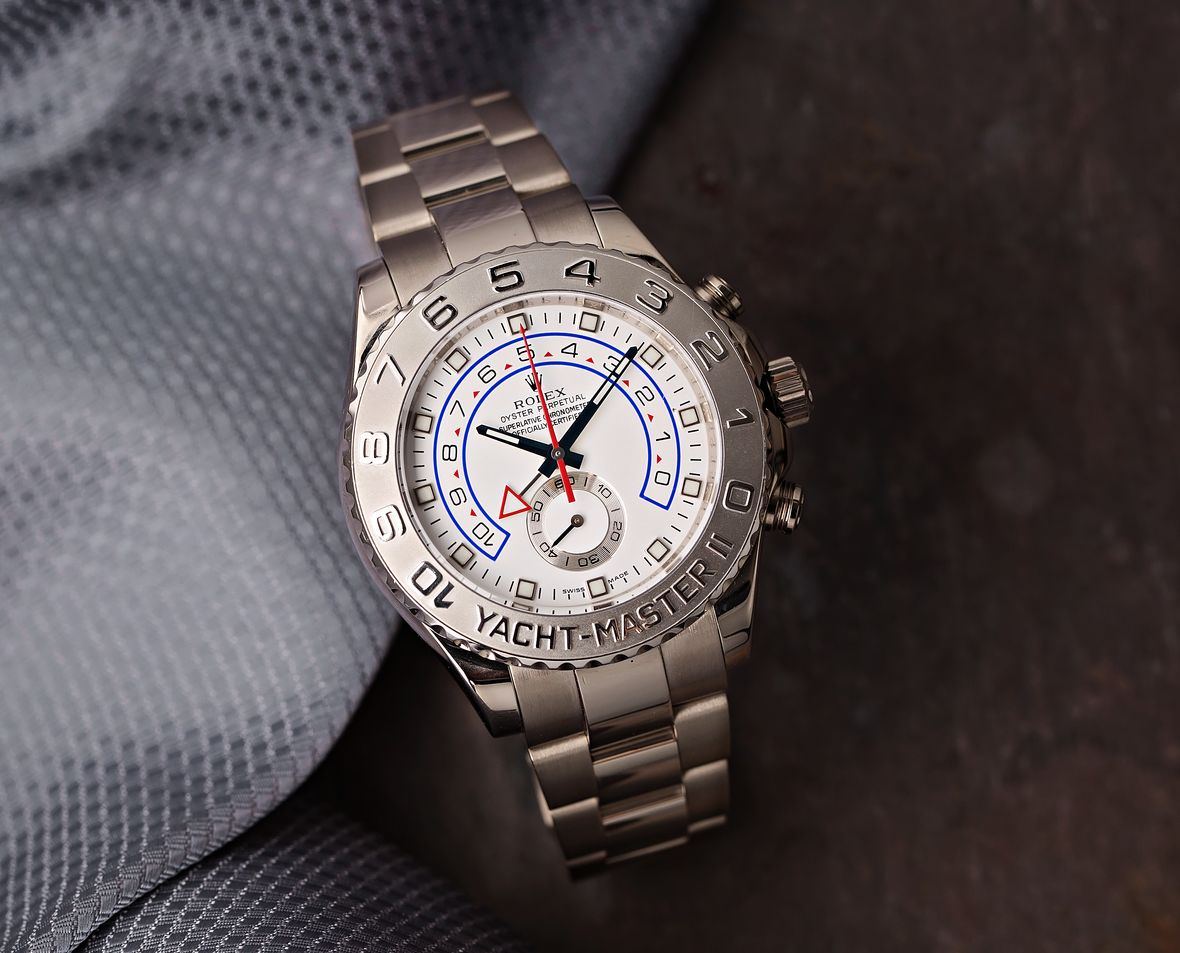 Click here for our ultimate Buying Guide on the Rolex Yacht-Master II. 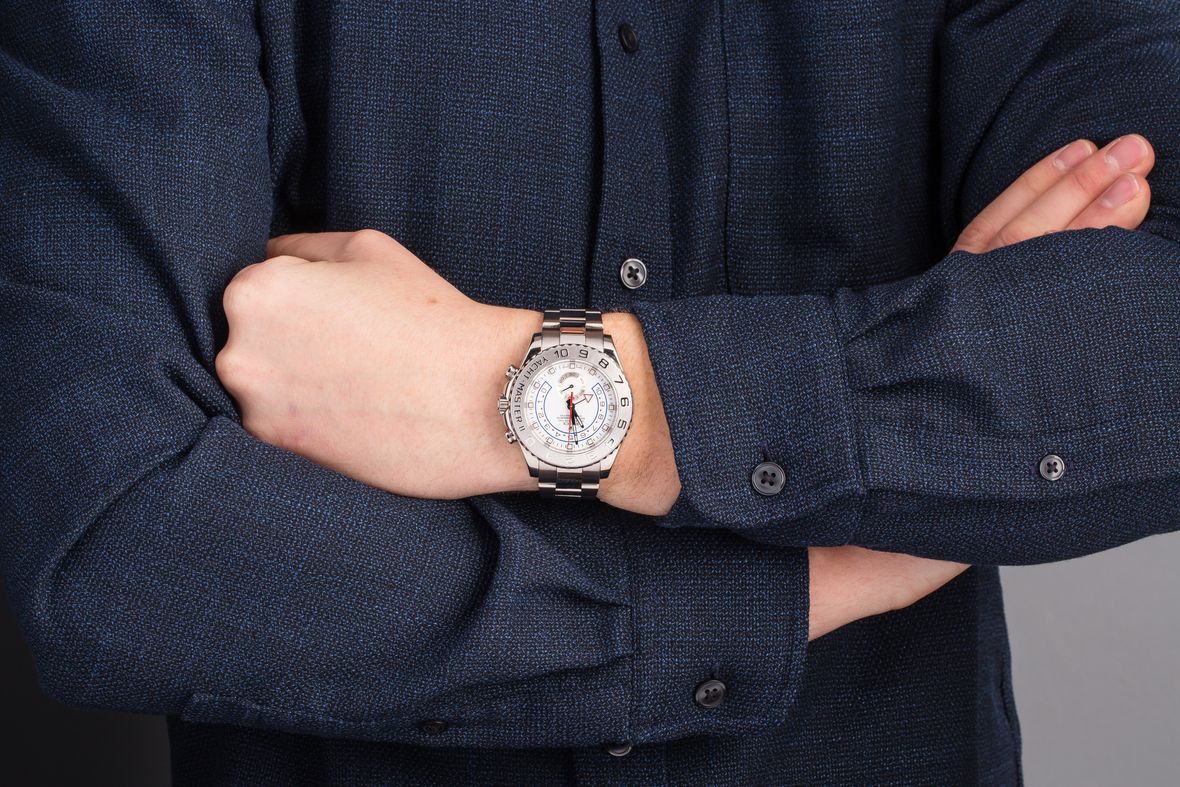 The Rolex Yacht-Master II ref. 116689 is a solid white gold skipper’s watch with a platinum bezel. The reference 116689 was one of two models that debuted Rolex’s all-new regatta timer in 2007. The Yacht-Master II 116689 was released alongside a yellow gold eye-catcher with a bright blue ceramic bezel. Where the 18k yellow gold edition (the ref. 116688) was a grandstanding and spotlight-hogging extrovert, its monochrome-metal sidekick was decidedly more understated (at least as understated as a 44mm solid gold Rolex can be).

A case diameter of 44mm makes the Yacht-Master II tied for the title of the largest watch in the brand’s fleet, matched only in scale by another aquatic monster, the Rolex Deepsea Sea-Dweller. It was also (for its day) by far the most complex model the brand had ever launched. Rolex makes very few complicated watches, preferring the simple elegance of three-hand timekeeping and throwing in the occasional GMT or chronograph function to mix things up a bit.

The Rolex Yacht-Master II, being aimed at those who compete in sailing regattas, was designed to time the precise and convoluted starting procedure of a yacht race. To achieve that, it was fitted with a 10-minute programmable countdown timer, in addition to a mechanical memory and both flyback and fly-forward functionality – the first watch in the world to contain such features. The Rolex Yacht-Master II’s advanced functionality enables a boat skipper to be able to instantly synchronize the watch with the official regatta timer, ensuring pinpoint accuracy when crossing the starting line. 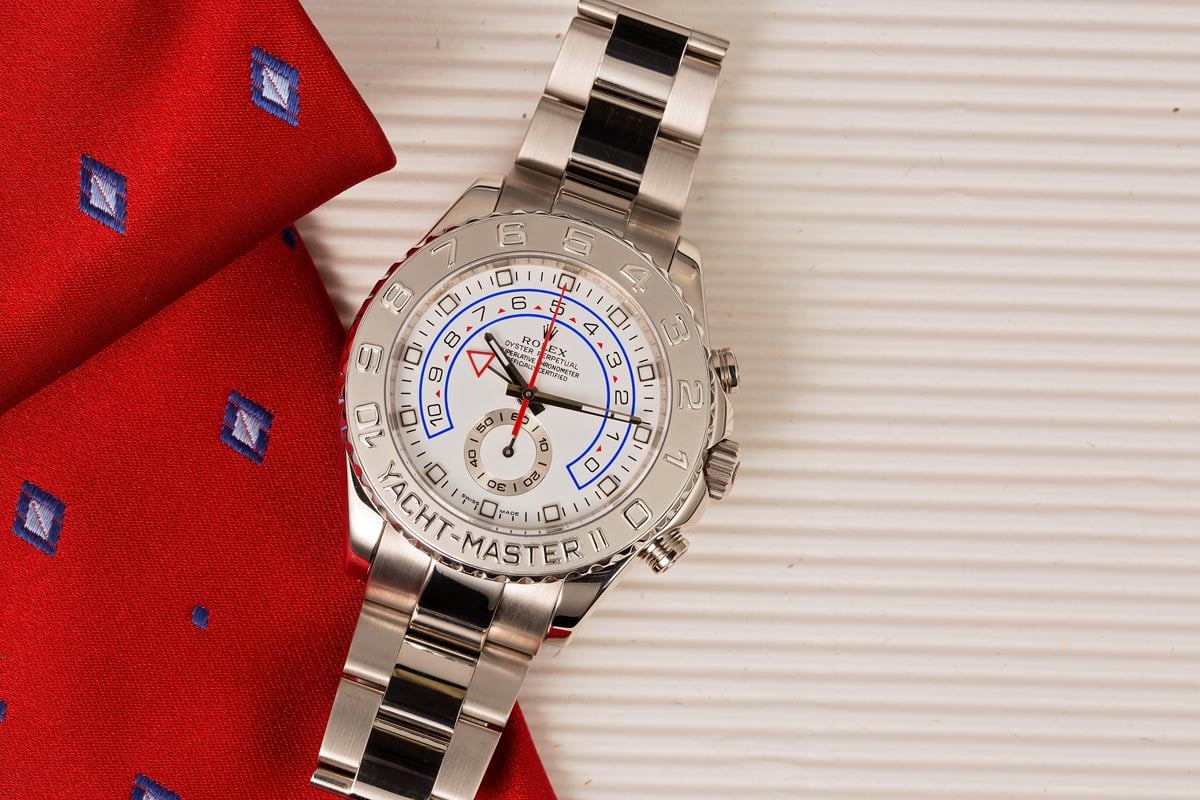 The Rolex Yacht-Master II is a bravura piece of engineering and one that required Rolex’s boffins to come up with a new way to cram so much tech into one watch. The key innovative difference made was to incorporate the bezel, which is typically little more than a decorative feature, into the overall mechanism and the working mechanics of the watch. Called the Ring Command Bezel, it is directly linked to the Yacht-Master II’s internal movement, acting as an on/off switch and unlocking the various operations to create a surprisingly easy and straightforward setting process.

Rotating the bezel counterclockwise 90° allows for the countdown duration to be set via the winding crown, and returning it to its start position locks and (crucially) memorizes the desired countdown time setting. The start and stop procedures, along with the flyback/fly-forward functionality, are then all controlled with the pair of pushers located at two and four o’clock. This marked the first time that a bezel had been integrated in such a way, and it worked so well that Rolex has further refined the concept and included a more advanced version of it into the Sky-Dweller to enable access to its annual calendar and dual timezone settings.

The engine driving all this virtuosity is a heavily reworked version of the Cal. 4130 taken from the Rolex Daytona. The Cal. 4160 (later upgraded in 2013 to the Cal. 4161) took some 35,000 hours of perfecting, using a variation of the vertical clutch and column wheel system found on Rolex’s legendary racing chronograph. At the time of its release, the Rolex Caliber 4161 was also the brand’s most component-heavy movement, containing some 360 parts, many of them only possible to create through the use of UV-LiGA, a fabrication technology used to manufacture precision microstructures. 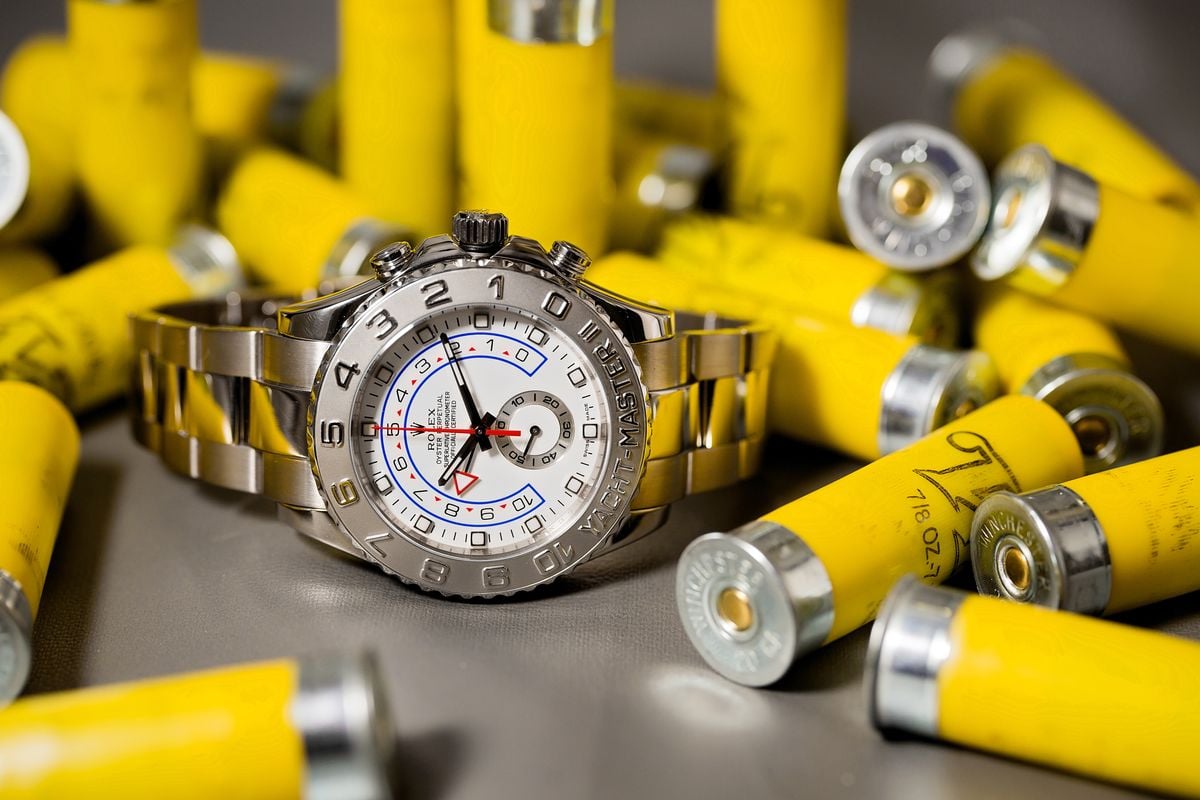 With a solid 18k white gold case and bracelet topped off with a 950 platinum bezel, the Rolex Yacht-Master II reference 116689 is one of the most expensive watches in the brand’s lineup – At retail, the asking price is nearly $50k. This means there just aren’t all that many examples of this model in circulation, because there aren’t that many people willing to shell out for it. Those who want a white metal Yacht-Master II are far more likely to opt for the Oystersteel model at around a third of the cost, albeit with a giveaway blue bezel.

The Rolex Yacht-Master II 116689 then is an ultra-rare version of an already pretty rare watch. You simply don’t see many examples of this particular reference out in the wild, and that is a well-proven recipe for a timepiece likely to become highly sought after once it becomes no longer available at a retail level. The reference 116689 also has an aesthetic that sets it apart in the range. It has a more solid look to it than the other references in the series, and the vast expanse of silvery-white metal somehow makes the watch look bigger on the wrist.

All told, the Rolex Yacht-Master II 116689 is a very special watch. Now into its second generation, Rolex’s first foray into the world of true complications may be aimed at an extremely niche market, but it remains one of the most impressive examples of the watchmaker’s output there has ever been. While there’s no guarantee the Rolex Yacht-Master II reference 116689 is headed for classic status, this ultra-luxurious model has all the ingredients needed to one day be at the top of every collector’s wish list. 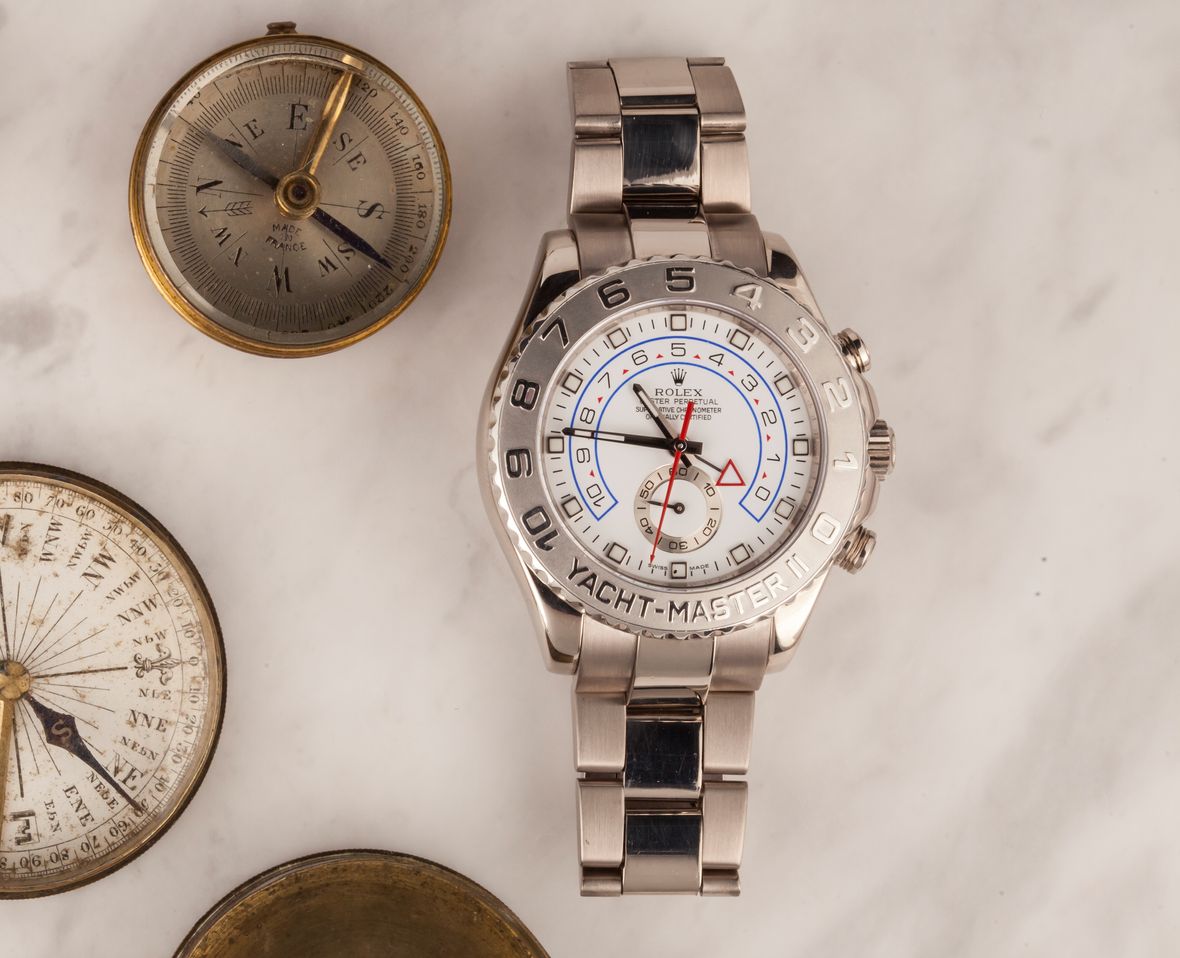