The Rolex Sea-Dweller is the brand’s ultra-capable professional dive watch, and the Double Red Sea-Dweller (DRSD) is one of the most coveted and collectible vintage timepieces in the world. However, while you probably know why the DRSD is famous – that ‘double red’ text – there’s also a lot you probably don’t know about this famous vintage dive watch.

Below, we are going over four key facts about the Rolex Double Red Sea-Dweller to give you more insight into the history and defining features of this iconic vintage timepiece. 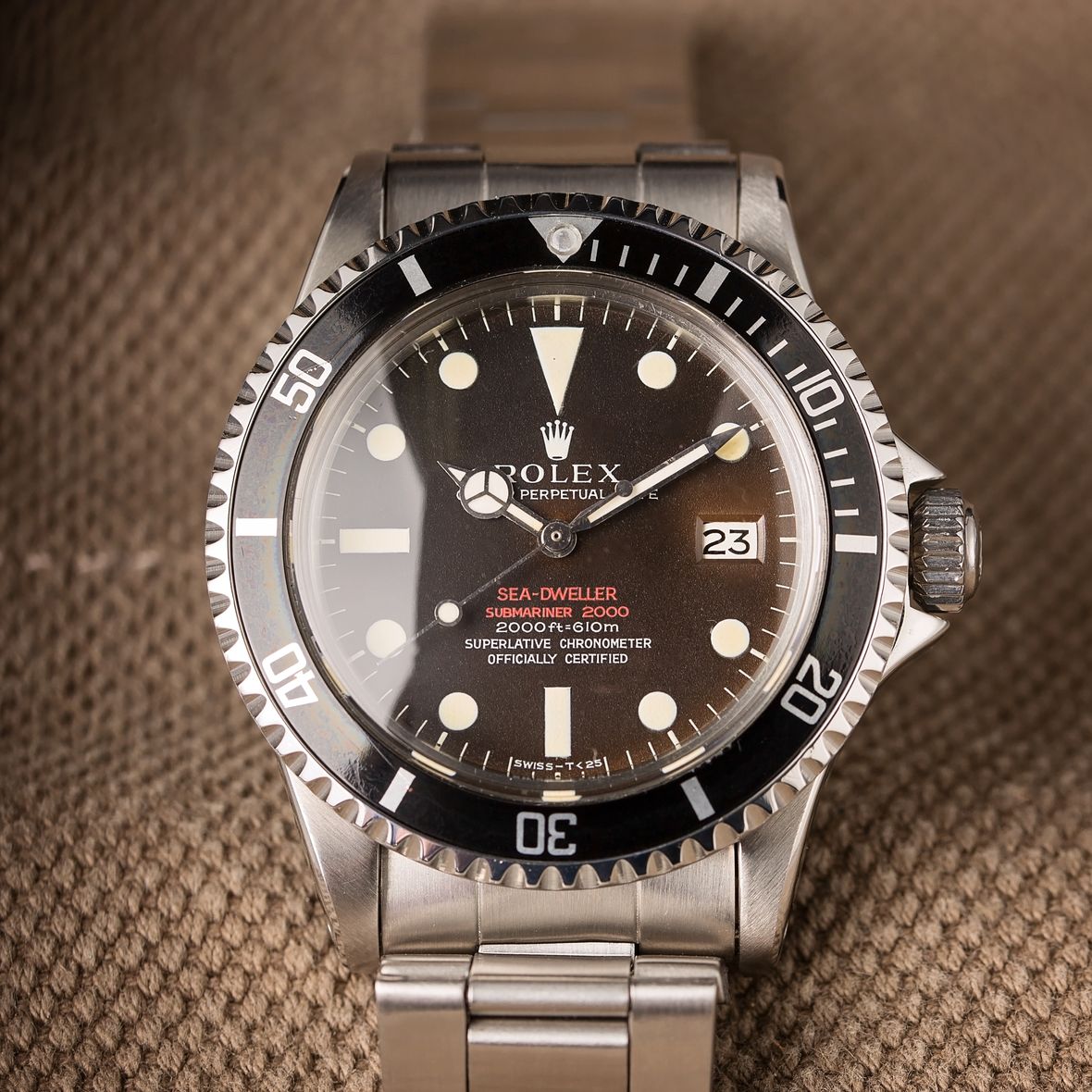 Click here for our Ultimate Buying Guide on the Rolex Sea-Dweller. 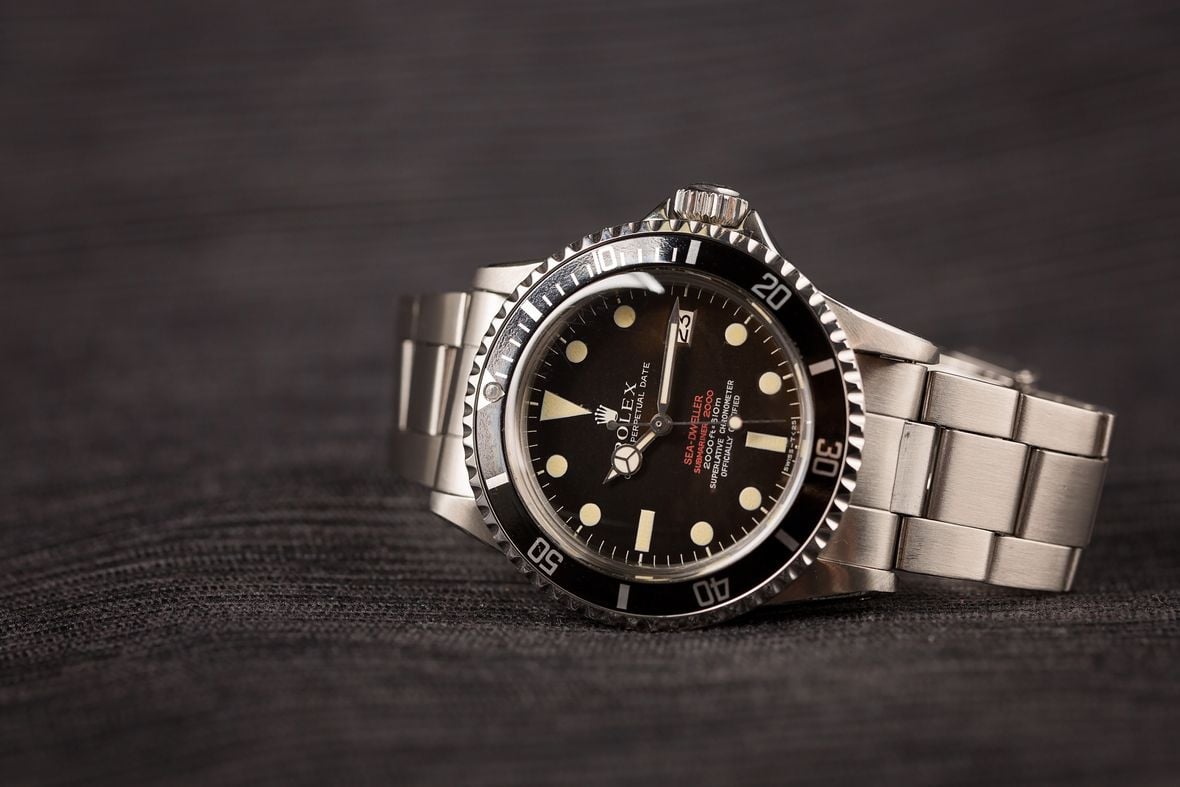 1. The Rolex Sea-Dweller was developed from a collaboration

As the age-old adage goes, “necessity is the mother of inventions” – and that is absolutely the case with the Rolex Sea-Dweller. In the 1960s, Rolex had a special relationship with the leading commercial diving company of the time, COMEX (Compagnie Maritime d’Expertises).

It was COMEX that requested Rolex to create an enhanced diving watch that was not only capable of reaching great depths but also capable of depressurizing and returning safely back to the surface. Rolex fulfilled the request and produced a batch of special watches for the divers that would serve as the precursors for the Sea-Dweller collection. 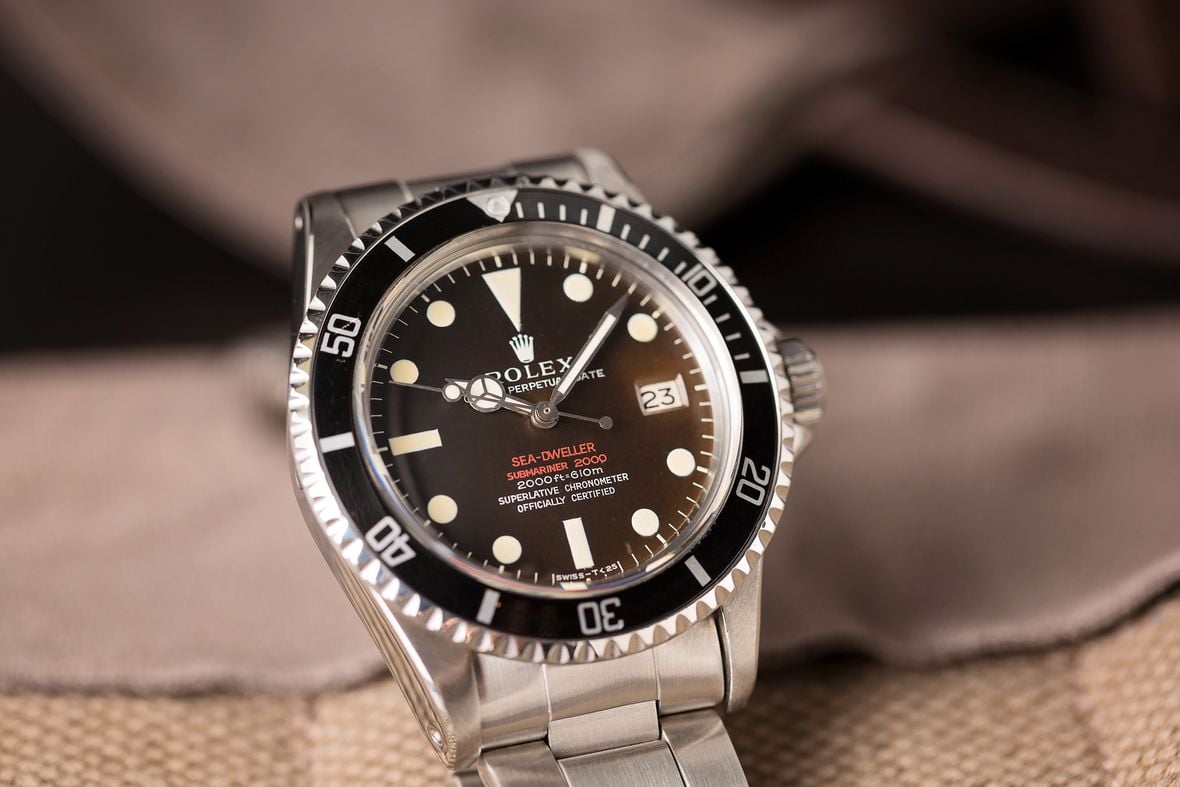 2. The Rolex Sea-Dweller was a souped-up version of the Submariner

The specially created watches for COMEX were actually Rolex Submariner ref. 5513 diving timepieces customized with Rolex’s patented Helium Escape Valve – a groundbreaking mechanism that allowed the trapped helium gases to be released from the case during decompression before the built-up pressure cold risk damaging the watch. The success of the modified diving watches led to the 1967 launch of the new Rolex Sea-Dweller collection in the form of the reference 1665.

When it was released, the Rolex Sea-Dweller 1665 featured the Helium Escape Valve, a thicker domed crystal without a Cyclops lens, a thicker case, and a new dial with the words “Sea-Dweller” and “Submariner 2000” written on two separate lines in red letters. It is these two lines of red writing that gave the piece its nickname, the Double Red Sea-Dweller, or DRSD for short. As clearly indicated on the dial, the new Rolex Sea-Dweller could safely reach the incredible depth of 2000 feet, making it the watch of choice for deep-sea explorers. 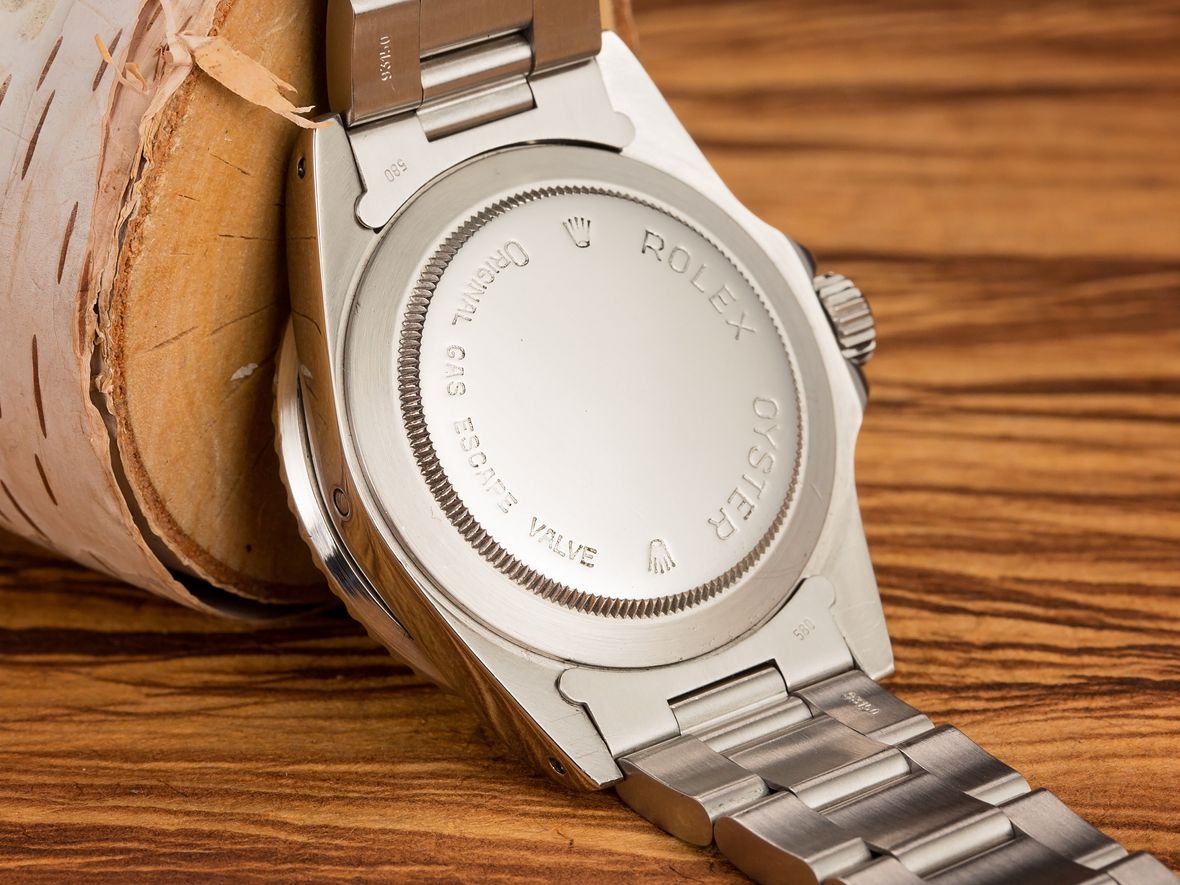 3. The Sea-Dweller is one of the few Rolex watches with engravings on the caseback

Guides to buying pre-owned Rolex watches dictate to avoid those timepieces with engravings on the caseback. Why?  Because that’s normally an indication of a counterfeit product since the brand does not typically engrave the casebacks of its watches. However, the Double Red Sea-Dweller is one of the exceptions to that rule.

On the casebacks of DRSD watches are several engravings – the Rolex logo, the words “Gas Escape Valve,” “Rolex Patent” (on early versions of the watch it was written as “Patent Pending”), and “Oyster”. Some models have the Rolex logo etched across the casebacks, while other versions have the logo engraved around the circumference. 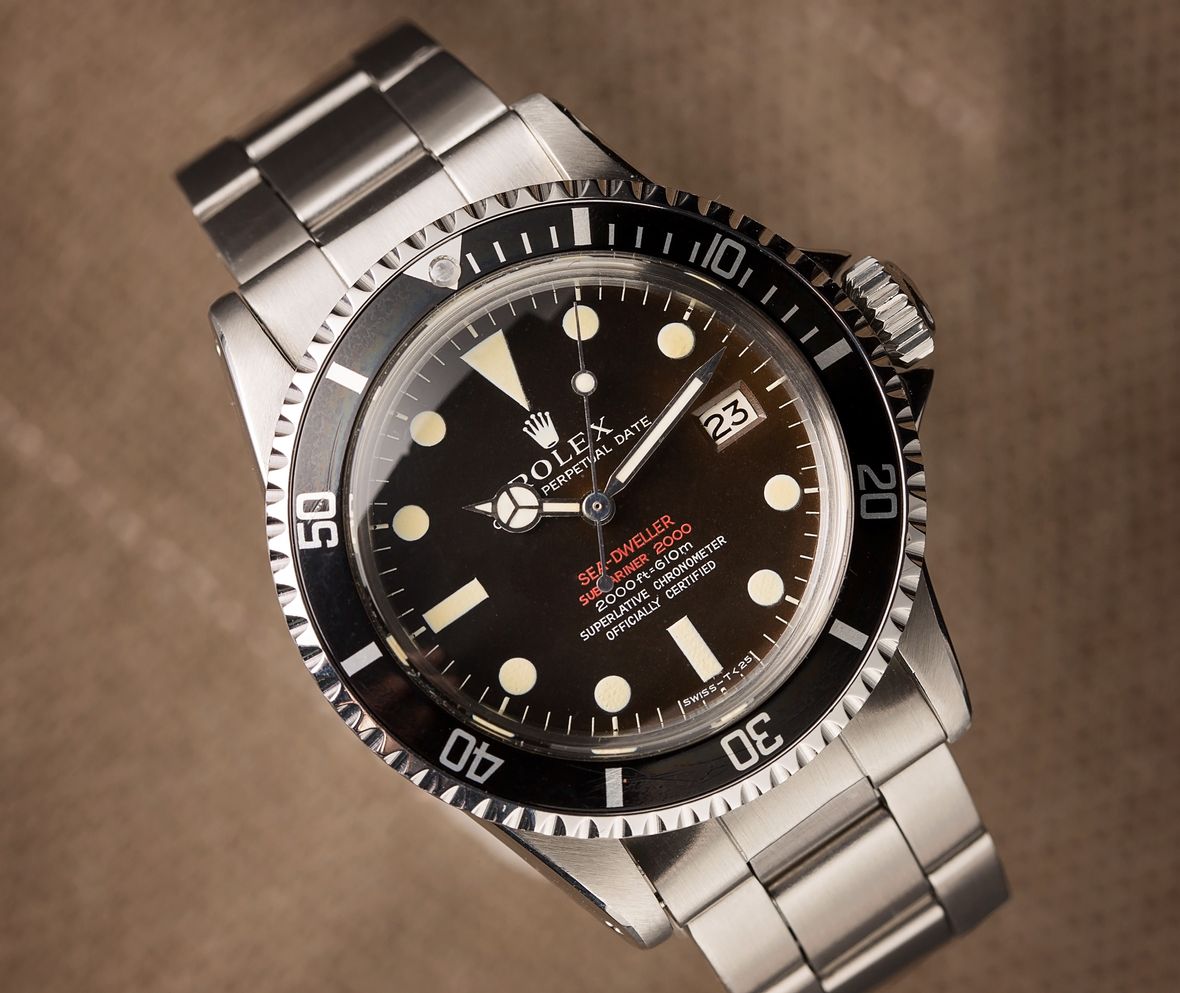 4. There are 4 Dial Variations for the Rolex Double Red Sea-Dweller DRSD

The Rolex Double Red Sea-Dweller was produced for approximately a decade from 1967 until 1978 (with some print catalogs depicting the watch as late as 1979). During that time, several dials were created and are known by collectors as Mark I, Mark II, Mark III, and Mark IV with their rarity ranking in descending order. With that in mind, all variations are highly coveted collectibles. Below, we’re outlining the key differences between each dial variation of the DRSD.

The Mark I dial featured white writing applied to the black dial with red paint on top. Both lines of red text are similar in terms of font and size, and they say the words ‘SEA-DWELLER’ and ‘SUBMARINER 2000.’

Another key feature of the DRSD MK1 dial is the coronet, which is quite sharp with 5 tips of the crown and a well-defined oval at the base. Many of these early MK1 dials are faded, with the red now appearing pink, white, and sometimes even yellow. If the dials are faded you may also see these MK 1’s referred to as ‘Double Pink’ or ‘Double Yellow’ dials. 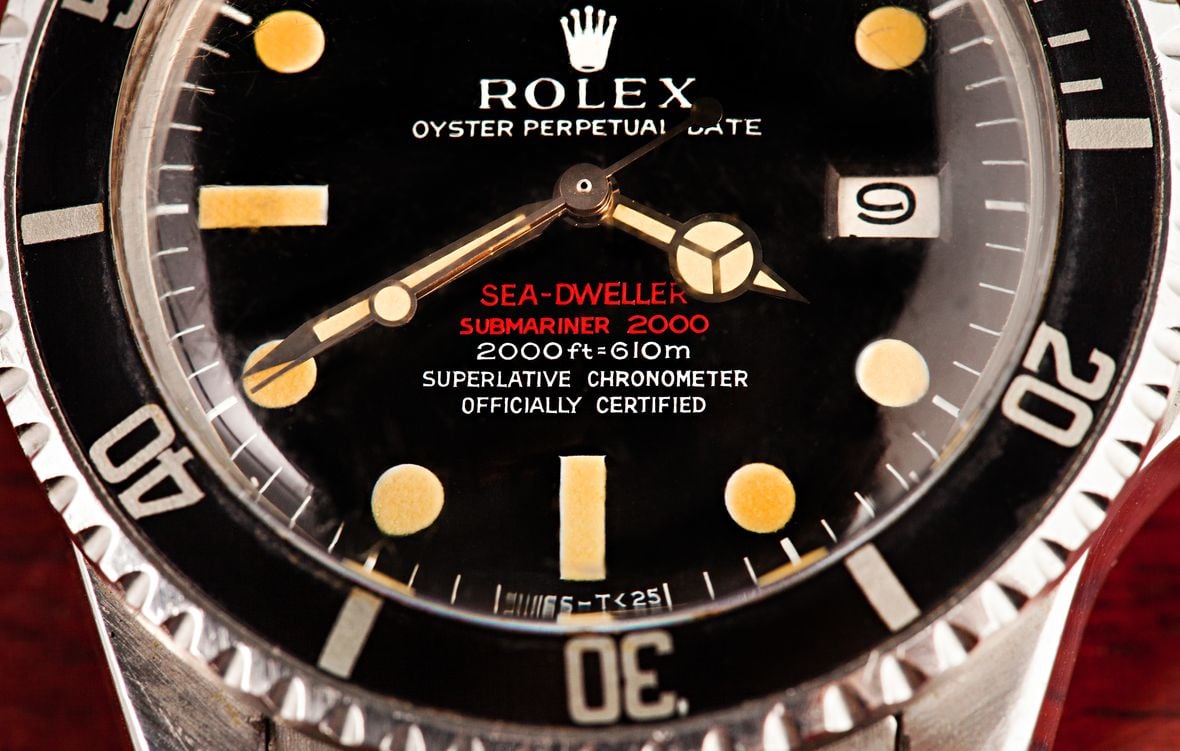 The Mark II dial features red writing directly on the black dial, with the red lettering appearing vibrantly. On the DRSD MK II dial, both lines of text are also different sizes, the second line (‘SUBMARINER 2000’) being smaller. You’ll also notice that the coronet spikes are not as clear on the MK II, and the oval at the base is smaller and harder to distinguish. Some of the MK II dials have also faded over the years, the matte black dial turning a chocolate brown color that is now highly collectible.

Double Red Sea-Dweller Mark III dials also feature red writing directly on the black dial, but they appear darker and less vibrant than the previous Mark II dials. Even the white writing on the dial is less vibrant. Again, the second line that reads ‘SUBMARINER 2000’ is also written in a slightly smaller text. However, the coronet is much more distinguished on the Mark III and the oval base is also clearly defined again.

The final and most common DRSD dial is the MK IV, which has its double red writing written directly on the black dial, with the color appearing a bit brighter than the MK III but still less intense than the MK II. Once again, the second line of text reads ‘SUBMARINER 2000’ and is smaller than the ‘SEA-DWELLER’ text above it. What also sets this dial apart is the coronet which is clearly defined (as is its oval at the base), but the text isn’t quite as sharp.

Diving into the history of the Double Red Sea-Dweller highlights an integral part of the Rolex heritage and underlines the brand’s steadfast commitment to producing exceptional watches that are capable of thriving in the most extreme and challenging environments in the world. 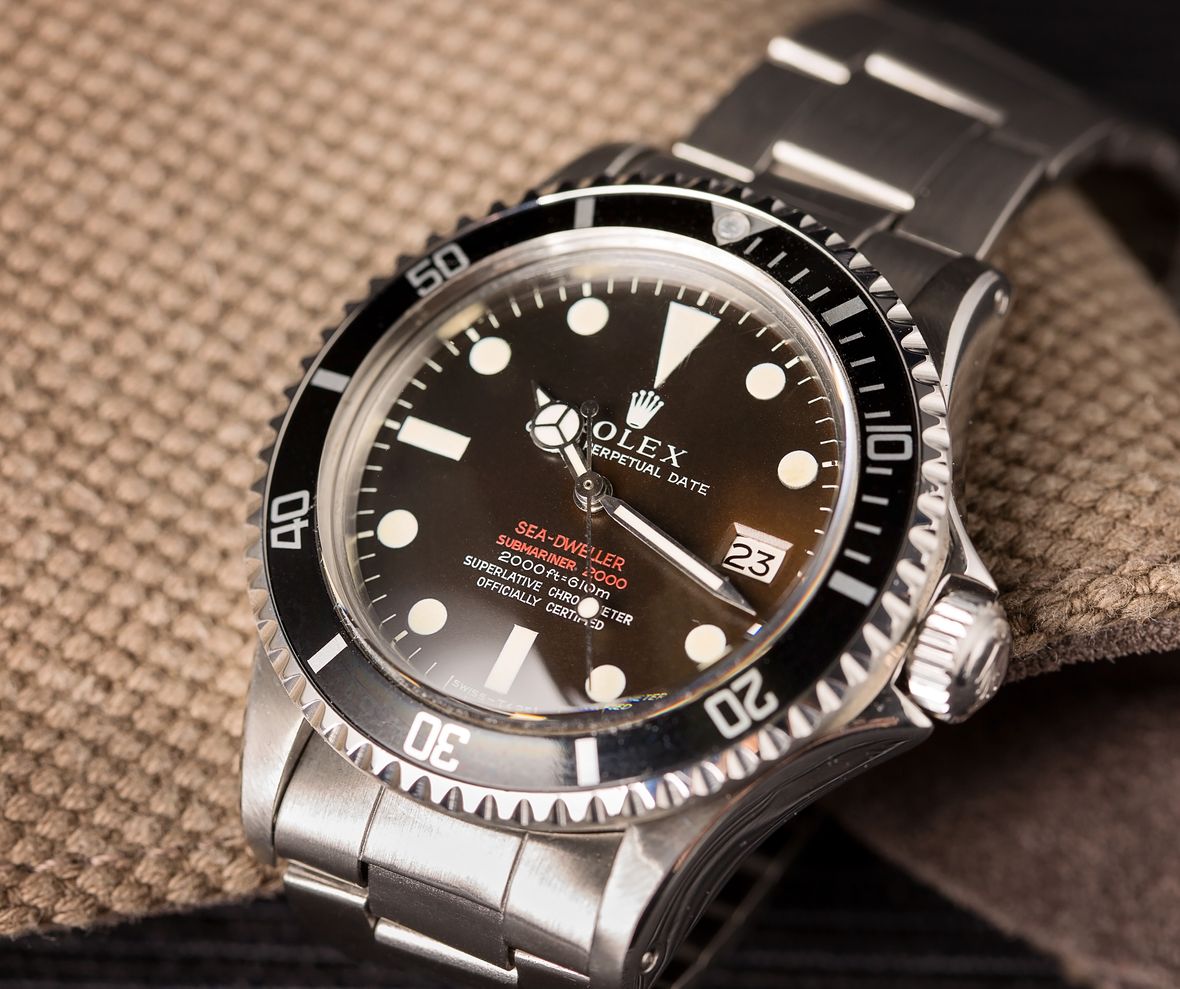