The late legendary watch designer, Gérald Genta had plenty of hits to his name: the Audemars Piguet Royal Oak, the Patek Philippe Nautilus, and the Cartier Pasha – just to name a few. But did you know that he had a hand in designing a Rolex watch too? The Rolex King Midas to be exact, and in true Genta form, this is far from your traditional, run-of-the-mill design.

Let’s find out more about the rare limited-edition timepiece that both Elvis and John Wayne once owned, which ultimately found its way into the Rolex Cellini collection.

Click here for our Ultimate Buying Guide on the Rolex Cellini. 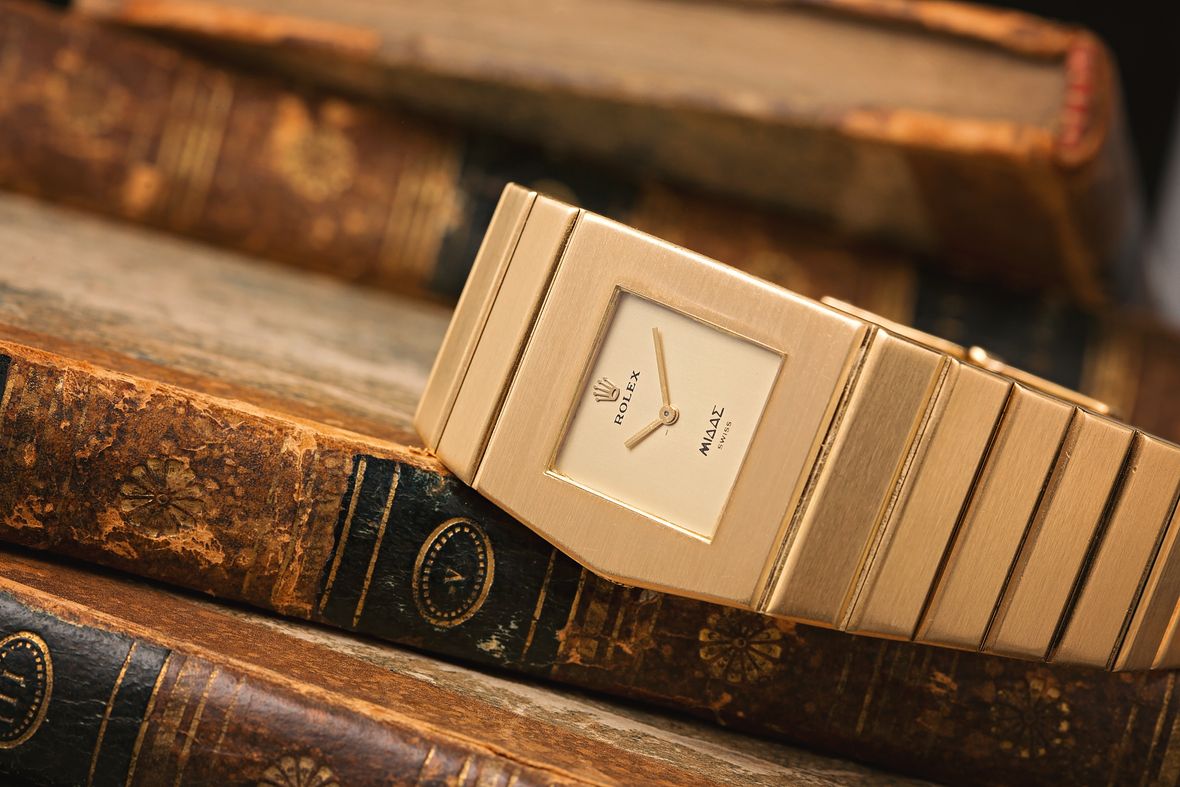 In 1964, Rolex introduced the heaviest gold watch on the market – aptly named after Greek mythology’s King Midas, who was famous for his ability to turn everything he touched into gold. Featuring a manually-wound movement and an unconventional silhouette comprised of an asymmetrical case with a thick integrated bracelet, the King Midas watch was carved from a single block of 18k yellow or white gold and weighed between 150 and 200 grams.

In addition to being the heaviest gold watch of its day, it was also the most expensive Rolex of its time. Just in case one might forget the name of the watch, the words “King” and “Midas” are engraved on the side of the case, flanking the saw-toothed winding crown. 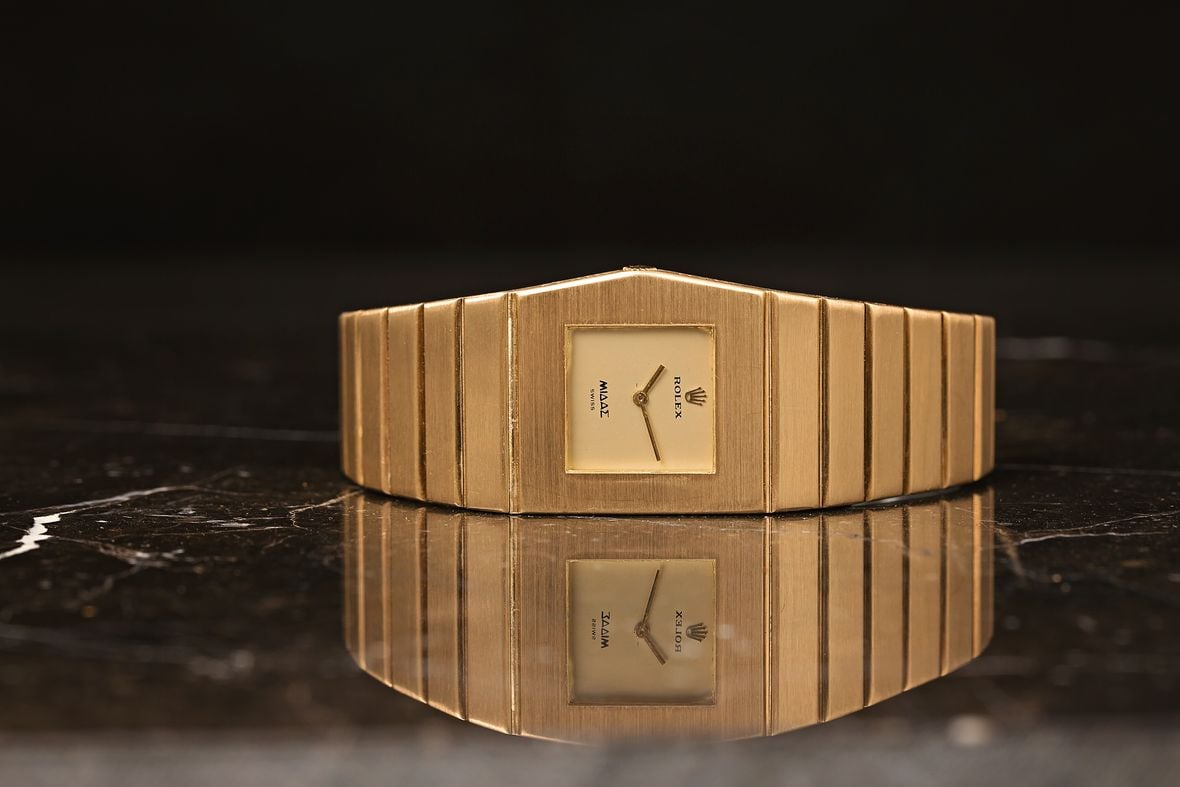 A Design Inspired By the Parthenon

The design of the Rolex King Midas draws its inspiration from the Parthenon temple of Athena in Greece. If you place the watch on its side with the winding crown facing up, you will see the triangular tip resembles the temple roof, while the thick bracelet grooves represent the columns. Taking design cues from objects was a signature Gérald Genta approach, as later seen in the Royal Oak (inspired by a diving helmet) and the Nautilus (inspired by a porthole on a ship).

Yet another uncommon trait of the King Midas is that it was produced as a limited edition model (unusual for Rolex), complete with engraved numbers on the back of the bracelet. The first King Midas model, the ref. 9630, was limited to 1,000 pieces, followed by the ref. 3580 in the 1970s, which was also produced in a limited series.

In contrast to the unusual case and bracelet, the dial of the Rolex King Midas is relatively classic and simple in design. At the center of the small square dial is the pair of hour and minute hands, accompanied by the Rolex crown and Greek letters spelling out the “MIDAS” name. Surprisingly for a watch from this era, the dial is protected by a sapphire crystal rather than one made from acrylic. 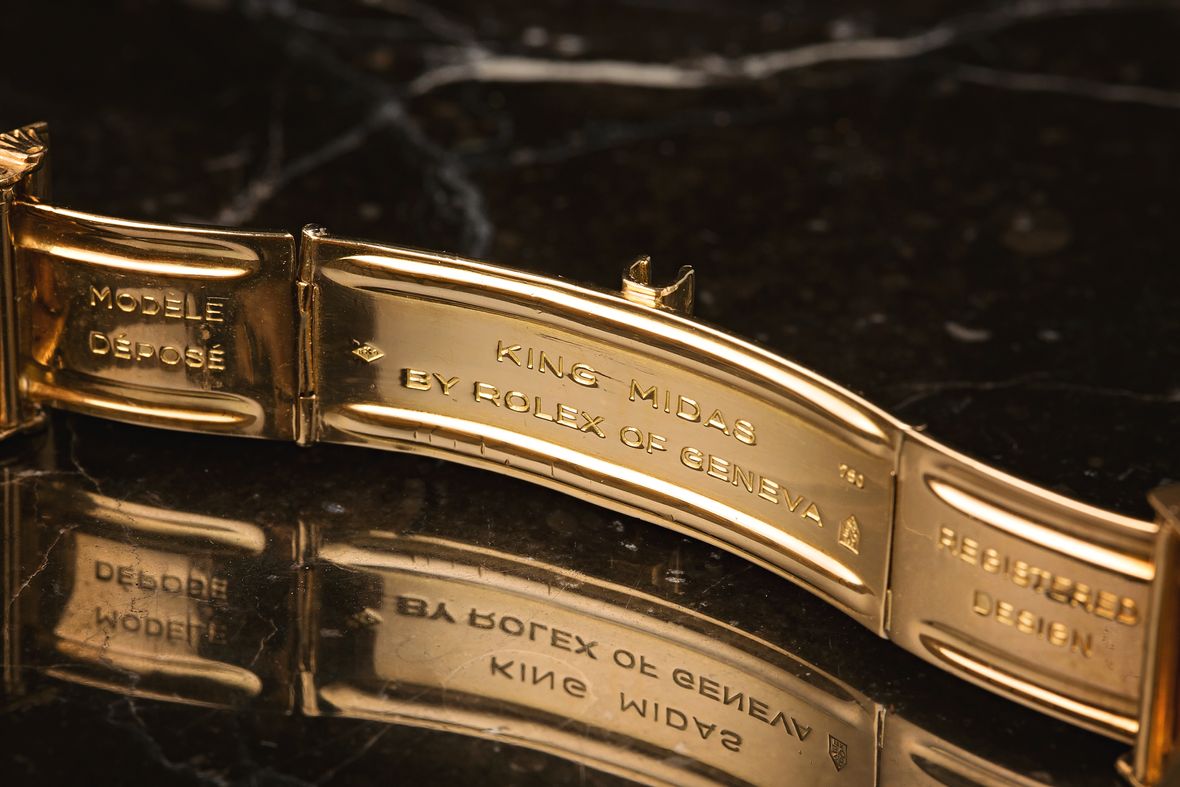 A Midas for A King, A Duke, and A Villain

The King Midas may not be a famous Rolex watch today, but some legendary men wore it decades ago. The most famous of them all was the King of Rock & Roll, Elvis Presley. The watch (No. 343 ) was given to Elvis after performing six shows at the Houston Livestock Show and Rodeo in 1970. Today, that exact Rolex King Midas sits on display at Graceland in Memphis, Tennessee.

Additionally, Actor John Wayne also owned a Rolex King Midas (No. 557), which was sold in 2011 during the “The Personal Property of John Wayne” auction. Back then, the Duke’s Rolex sold for $26,290, which was well over three times its pre-sale estimate.

The Rolex Midas even made an appearance in a James Bond movie. During the 1974 film, The Man with the Golden Gun, the watch can be spotted on the wrist of Francisco Scaramanga – a villain played by Christopher Lee. However, it is important to point out that his Midas was a later model that belonged to the Cellini collection, rather than one of the original, limited-edition Rolex King Midas timepieces.

There is no doubt that the King Midas watch is an anomaly in Rolex’s lineup – it is astonishingly different from the other watches made by the Crown. However, that is precisely what makes the Rolex King Midas so intriguing. Designed by a watch industry legend and worn by at least two legendary entertainers, the mysterious King Midas watch story is one worth telling. 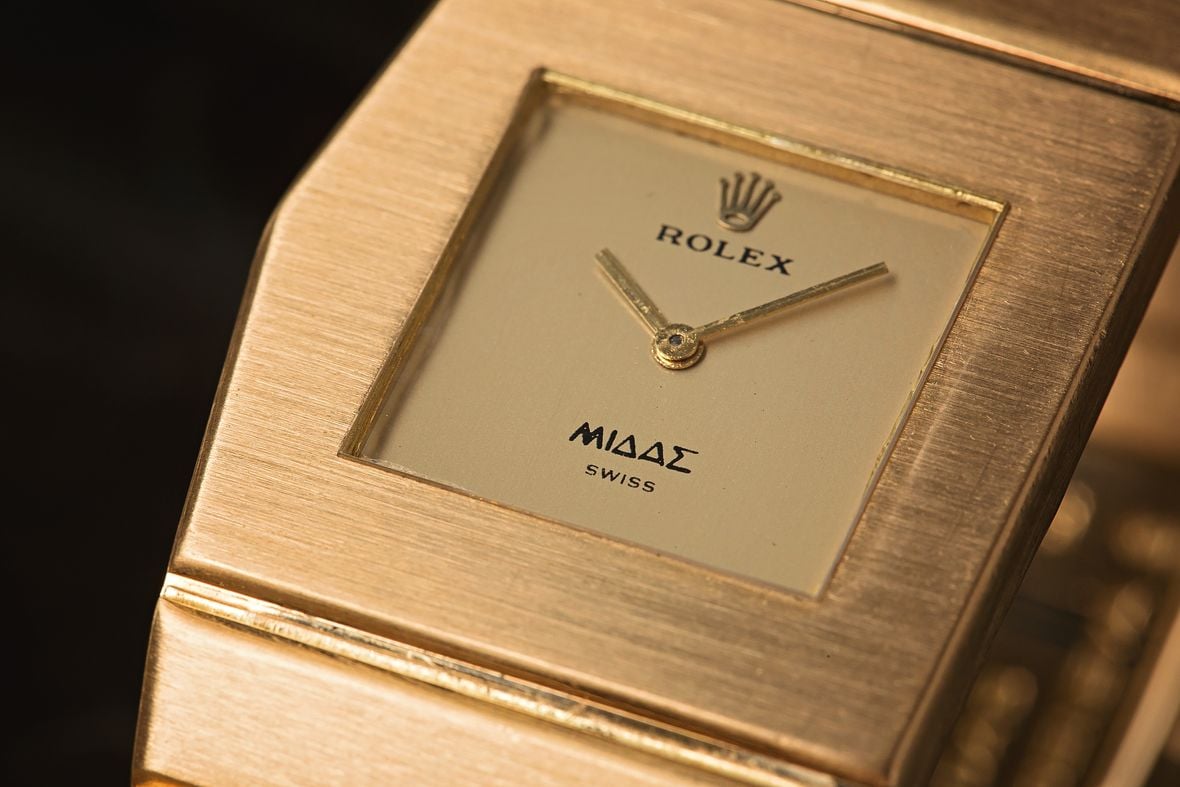 The first three iterations of the King Midas (references 9630, 3580, and 4315) feature a similar design set with an asymmetrical case inspired by the Greek Parthenon and an integrated bracelet. However, Rolex eventually produced the King Midas in other configurations as part of the Cellini collection.

The classic King Midas bracelet is integrated with flat links that resemble tank tracks and either a double deployant (ref. 9630 and ref. 3580) or a single fold-over clasp. The links on the very first ref. 9630 measure just under 4mm and nearly match the case’s thickness.

References 9630 and 3580 utilize the same bracelet, distinguished by their large engravings, while many references that followed feature a slightly slimmer and lighter-weight integrated bracelet. Rolex also produced iterations of the King Midas as part of the Cellini collection on leather straps, although these models do not have the “King Midas” name on them. 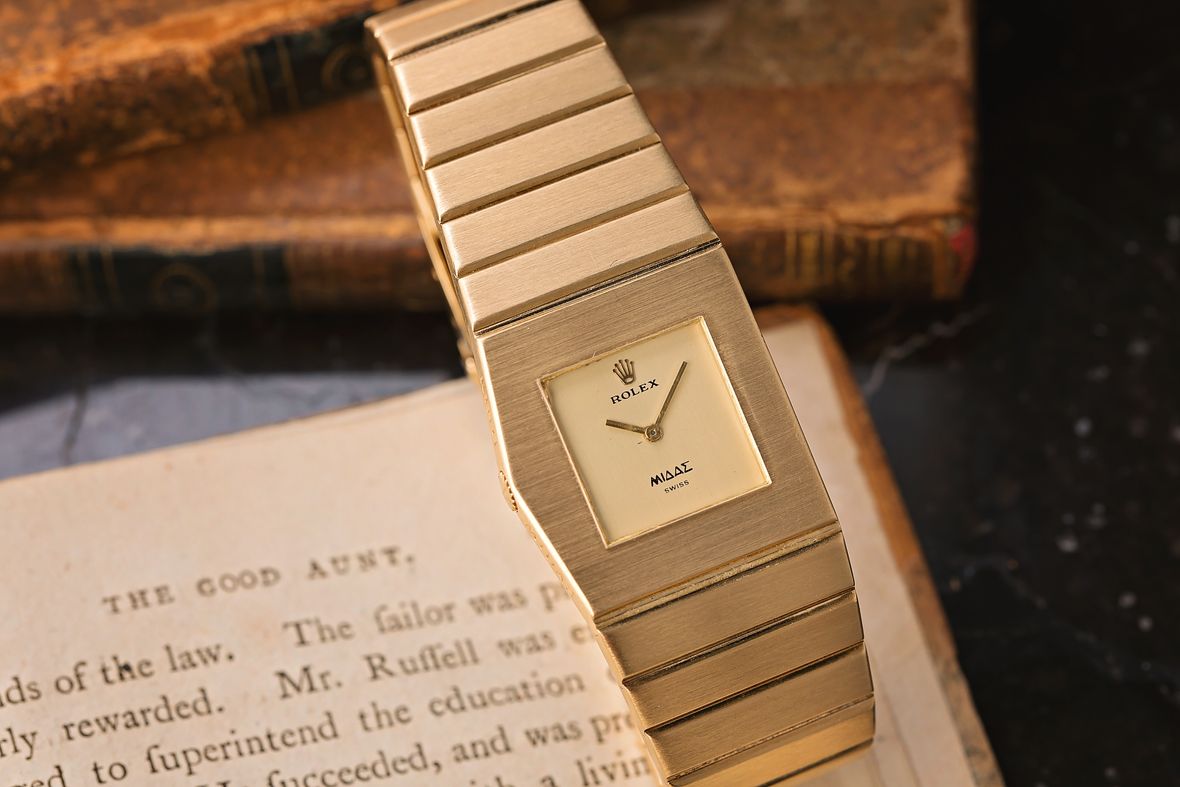 Rolex introduced the King Midas with a unique, asymmetrical case in solid gold, followed by other related Cellini watches with shapes such as square, hexagonal, and even a ladies size model called the “Queen Midas.” The case itself is pretty slim, measuring less than 5mm thick, while references with ribbed cases measure about 6mm thick. Depending on the reference, the case will either be smooth, textured, ribbed, or even set with diamonds.

The first several editions of the Rolex King Midas did not have the model name engraved on the case’s side. It’s also important to note that the crown is positioned on the left side of the case as a nod to King Midas because everything he touched with his left hand turned to gold – a charming tribute, indeed.

The dial is elegant in its simplicity, featuring hour and minute hands and minimal text. The Rolex logo is ever-present at the 12 o’clock position. The first reference 9630 features “ΜΙΔAΣ” (“Midas” in Greet letters) at 6 o’clock, which was replaced after 1972 by its successor ref. 3580 with “Cellini” (it should be noted that some collectors do not consider these later-era Cellini models to be true King Midas watches).

Rolex also added the distinction “Genève” to the dial just below the Rolex logo during this era, bringing it closer in line with the rest of the models in the Cellini collection. While most references feature plain dials, later examples also include exotic stone dials and even some encrusted with diamonds or decorated white and yellow gold stripes.

The first Rolex King Midas ref. 9630 is powered by the outsourced 17-jewel Piaget Cal. 650. It is hand-wound and features hours and minutes only. The following model in the series, reference 3580 also utilizes the Cal. 650. However, Rolex transitioned to Cal. 651 late in its production. The Caliber 651 powered several references within the King Midas series until Rolex replaced it with the in-house Cal. 1600. Finally, in the early 1980s, the movement was upgraded to the Caliber 1601. 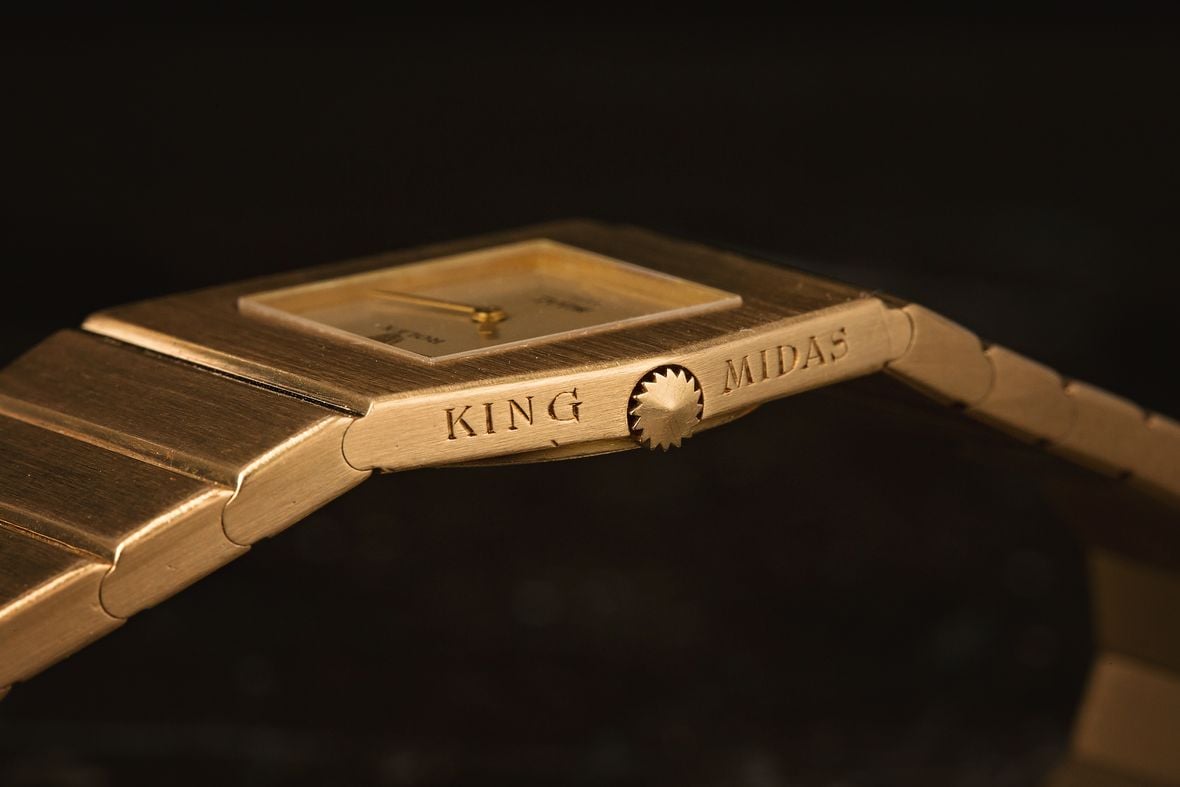 The approximate retail price of the Rolex King Midas was just under $3k when it was still in production. For a solid gold watch, that original price pales in comparison to what it would retail for on today’s market. However, it’s important to note that similar solid-gold Rolex offerings produced during the same period, such as the Presidential Day-Date, retailed for about half of what Rolex originally charged for the King Midas. It was intentionally priced above the average collector’s means to be the most expensive gold watch on the market.

Coupled with the appeal of a limited production run and the title of being the heaviest gold watch on the market, the King Midas eventually became a symbol of power and success. Despite its somewhat quirky design, the King Midas was a success and eventually was commanding over $5k at retail well into the 1970s.

Today, the price of a Rolex King Midas varies significantly, depending on the reference and condition of the watch. For the later-era Cellini iterations on leather straps, prices start at around $5k. Surprisingly, the original ref. 9630 sells for as low as $11k and tops out at about $15k. For a rare Rolex limited to just 1,000 pieces, that price might come as a shock. The King Midas is still positioned as a somewhat affordable collector’s item, but it does seem to be gaining in popularity over the past several years. If you’ve had your eye on the famed Rolex King Midas, now might be the time to invest before prices start to climb. 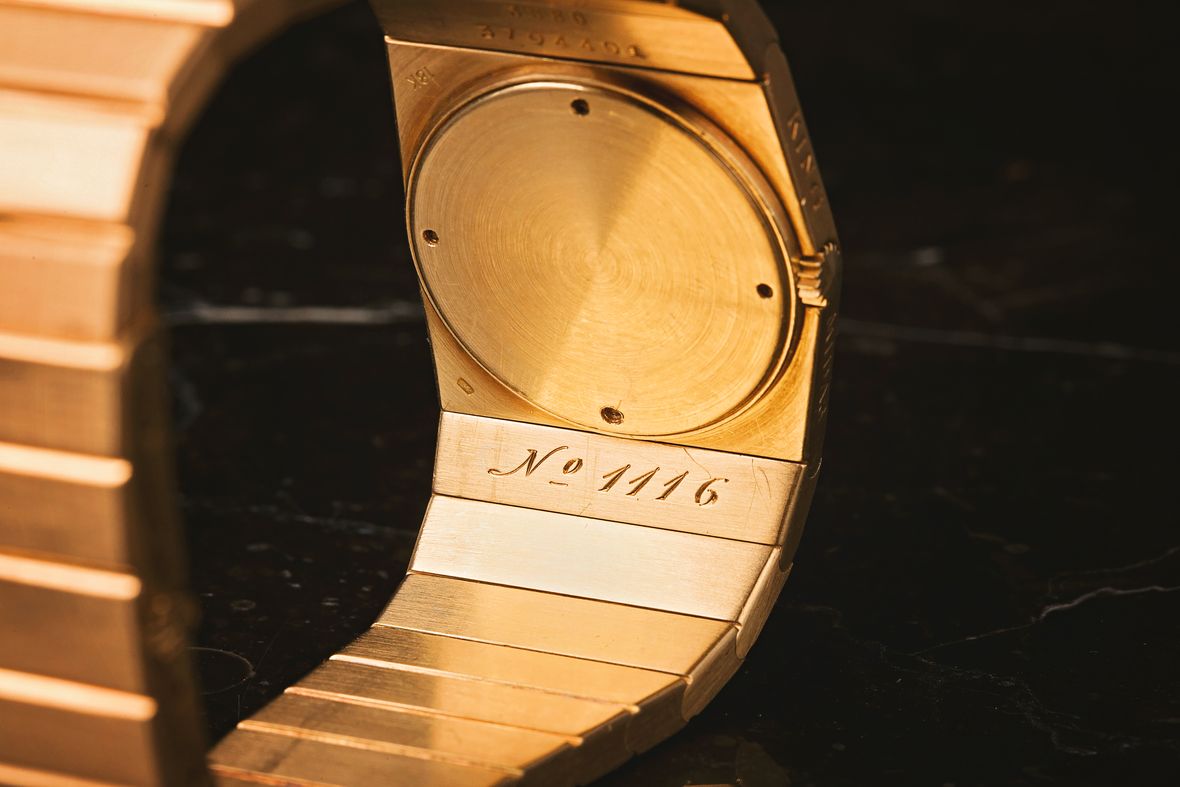 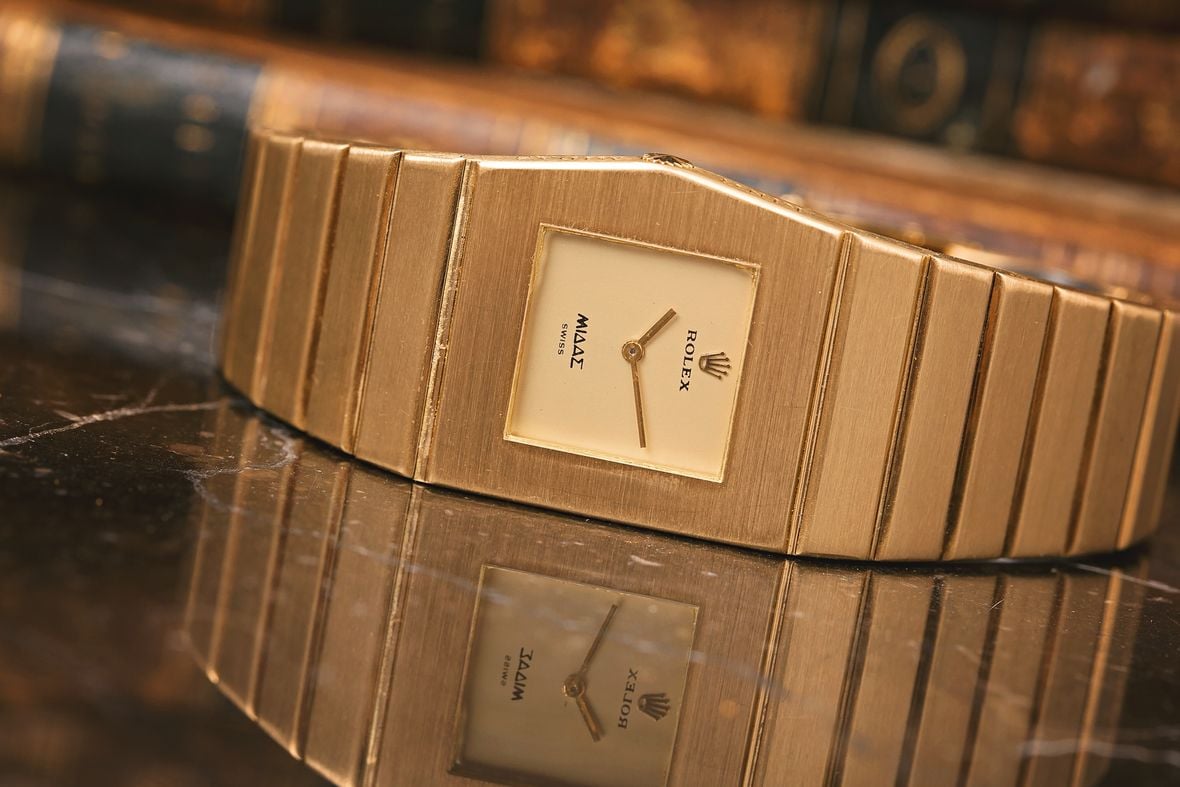