The History of the Vulcain Cricket: The First President’s Watch

Say the words ‘President’s watch’ to a bunch of collectors and the model that comes to mind will be Rolex’s omnipresent Day-Date.

The exclusively precious metal-forged brand flagship is indeed a piece that has found itself on the wrists of a number of the White House’s senior residents, as well as others at the very top of their profession, whether it is in business, sports or the performing arts.

But perhaps the watch that better deserves the title, one that has been worn by more commanders-in-chief than any other, is the Cricket by small independent Swiss manufacture Vulcain. 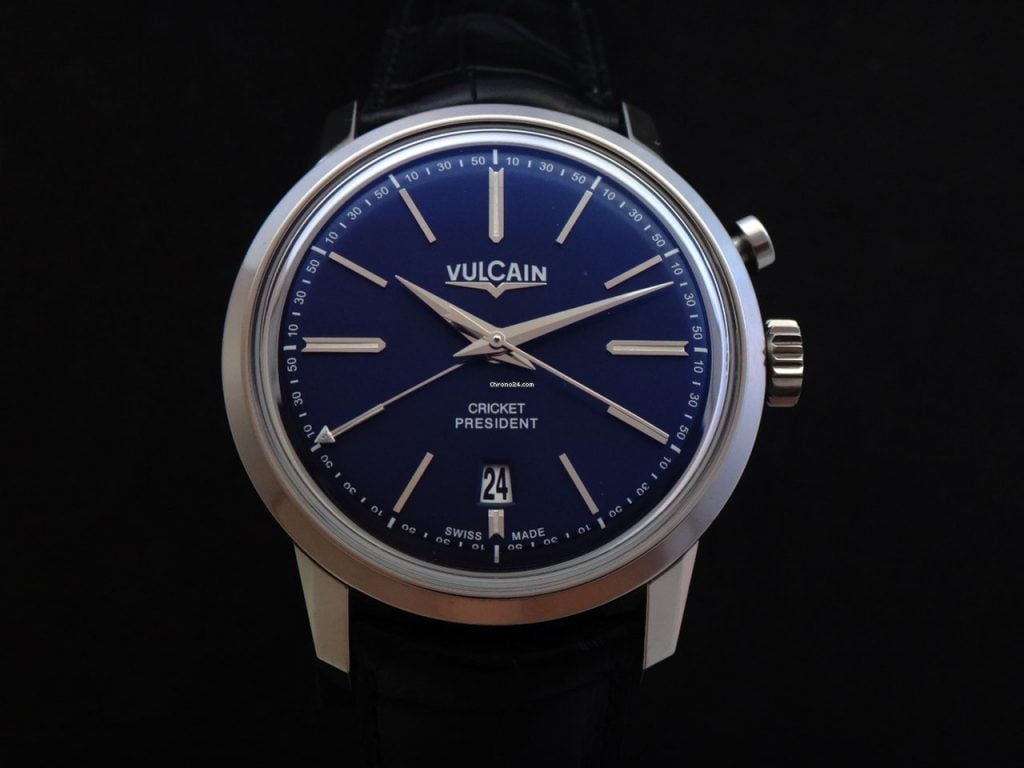 Vulcain was founded in 1858 in La Chaux-de-Fonds, Switzerland, by the Ditisheim family—Jacque, and his sons Maurice, Gaspard and Aron.

Originally creating fine pocket watches, it wasn’t until the early forties, in the midst of WWII, that the company turned its attention to the manufacture of wristwatches.

By then, the maison was controlled by Ernest-Albert, the son of Maurice Ditisheim, who had died in 1891, and it was he who renamed the house Vulcain, after the Roman god of fire and volcanoes.

But it was another of the family’s offspring, Robert, who had the idea of a mechanical alarm watch. Although there had been two other attempts, in 1910 and 1920, by rival firms, the technical challenges had rendered them of little use; the alarms were too quiet to be worthwhile and the vibrations ruined the accuracy of the timekeeping. 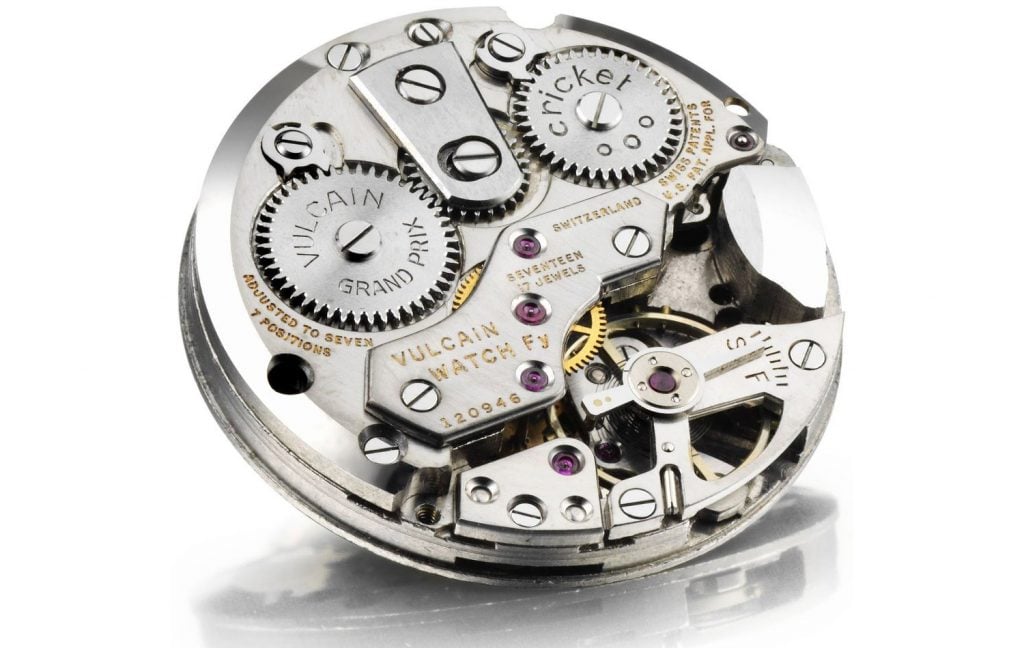 The caliber 120 from Vulcain

By 1942, Robert had produced a prototype which went someway to overcoming these previous obstacles. His Caliber 120, a 22mm, manually-wound mechanism, solved the problem of the vibrations by utilizing two separate barrels, one for the movement itself and the other for the alarm function. By keeping the two independent of each other, the alarm not drawing energy away from the movement, it meant it could sound for up to 25 seconds when fully wound.

However, it was the issue of the volume which proved most difficult to crack. Robert consulted with physicist Paul Langevin on the task, who suggested that if a tiny cricket could produce enough noise to carry long distances, then the same must be possible for a watch mechanism in a small case.

It would take another five years before all the pieces were in place. Robert patented his method of using a hammer to strike an internal membrane, which would resonate under the impact, and he introduced a perforated double case back to act as an echo chamber and amplify the sound. The noise it produced had a strident note, reminiscent of the call of the cricket.

The Caliber 120 was a groundbreaking piece of architecture; a 17-jewel movement with a 42 hour reserve, beating at 18,000vph. The only downsides were slight; because of the pioneering complication, the watch hands could only be set forwards, for instance. But the Cricket, presented to the public in 1947, was a significant success and went on to win the international Chronometry Competition the following year a the Neufchatel Observatory. 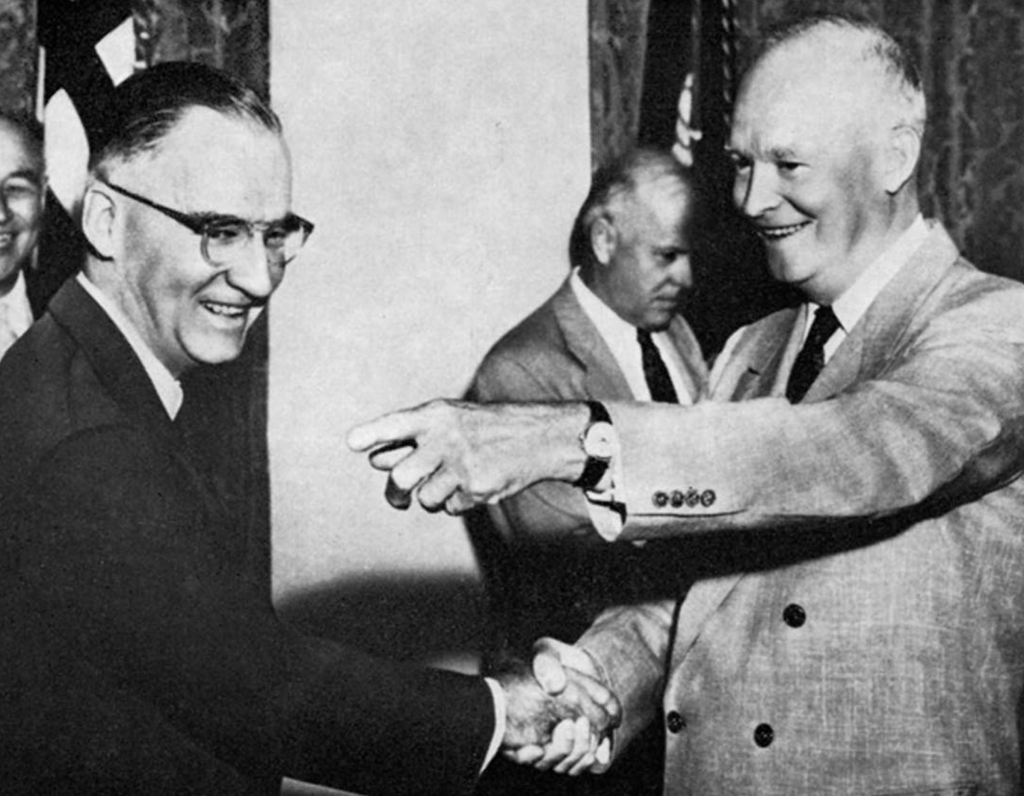 The classic Presidents watches were worn by four U.S. Presidents

The Cricket only had to wait until 1953 before it was given the sort of image boost money can’t buy. The White House Press Photographer’s Association presented Harry S Truman with a 14k gold version of the watch on the eve of him leaving office. They had the back engraved with the legend; ‘One More Please’, a phrase often shouted at the president during photo-shoots.

It was the start of the Cricket’s connection with U.S premiers, Vulcain perhaps learning from Rolex’s example of bestowing various heads of state with some of their finest.

Truman’s successor, Dwight Eisenhower, more commonly associated with the Day-Date, was given one, as was his vice president Richard Nixon, who received his from the National Association of Watch and Clock Collectors in 1955.

Lyndon Johnson was possibly the watch’s biggest fan, buying his personal piece in Geneva and having his signature included on the dial. He also acquired a bulk order of 200 Crickets to give away as gifts during his term. But while the president may have been an admirer, with rumors stating he would often set the alarm to go off during meetings to give him an excuse to leave early, it caused those around him nothing but headaches. The mechanism’s constant droning noise was mistaken for a bomb on several occasions, terrifying his secret service detail. 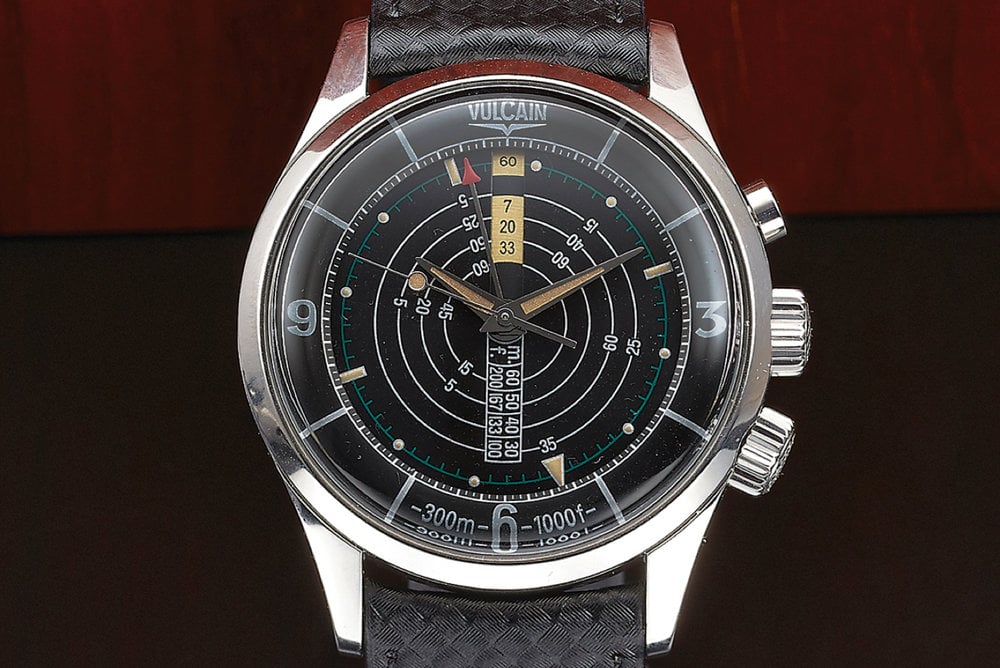 The Vulcain Cricket Nautical was introduced in 1961

The president’s watches were so successful, Vulcain were able to diversify the range. The Cricket Nautical, a 42mm diver rated to 300m, emerged in 1961 and was able to indicate when decompression stops were needed and even featured an alarm that could be heard underwater. And the Golden Voice, essentially a smaller version of the watch for women, was introduced in 1964.

But all Vulcain’s early triumphs came crashing to the ground, as they did across the rest of Switzerland, in the 1970s, when the quartz crisis started knocking.

Refusing to adopt the new technology coming in from the east, the brand decided to stick with mechanical movements, and it would prove their downfall. It wasn’t helped by the replacement to the original Caliber 120 movement, the Caliber 401 which, although it had a seconds sub dial and the added convenience of a date function, did so at the expense of a separate barrel for the alarm, which was subsequently reduced to just 15 seconds. It impacted sales and, after more than 100 years, the company was forced into liquidation. 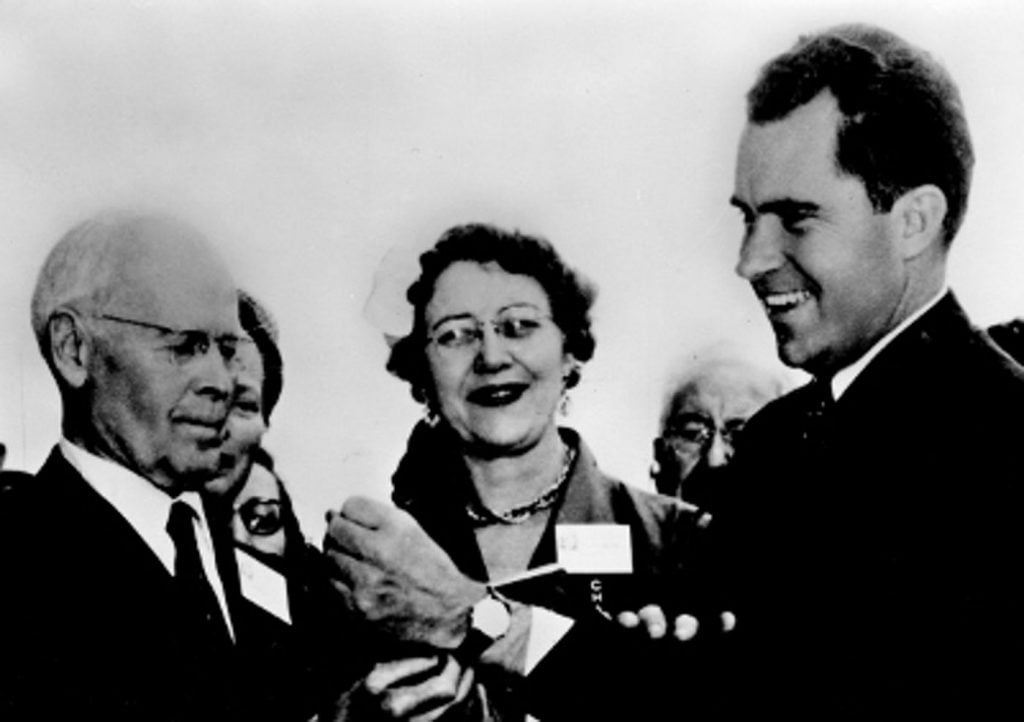 The Revival of The Vulcain Cricket

That could well have been that for the Cricket, if it hadn’t been for a Finnish jeweler named Keijo Paajanen. He met with Robert Ditisheim’s son Michael in the 1980s and suggested reinstating the practice of gifting the watch to American presidents during state visits to Finland. So it was that in 1988, Ronald Reagan became the first U.S. leader in two decades to receive his own example, followed by George Bush Sr. two years later. In 1995, Gerald Ford visited the country for the anniversary of the Helsinki Accords, finally awarded his own Cricket 20 years after the fact.

Clinton and Carter both toured Finland in 1997, each leaving with one of Keijo’s gifts and Obama was sent his after his inauguration in 2009. If stories are to believed, Trump has also since taken ownership.

That just leaves two presidents from the modern era without one. George W Bush has yet to experience Finland and JFK left us too early. 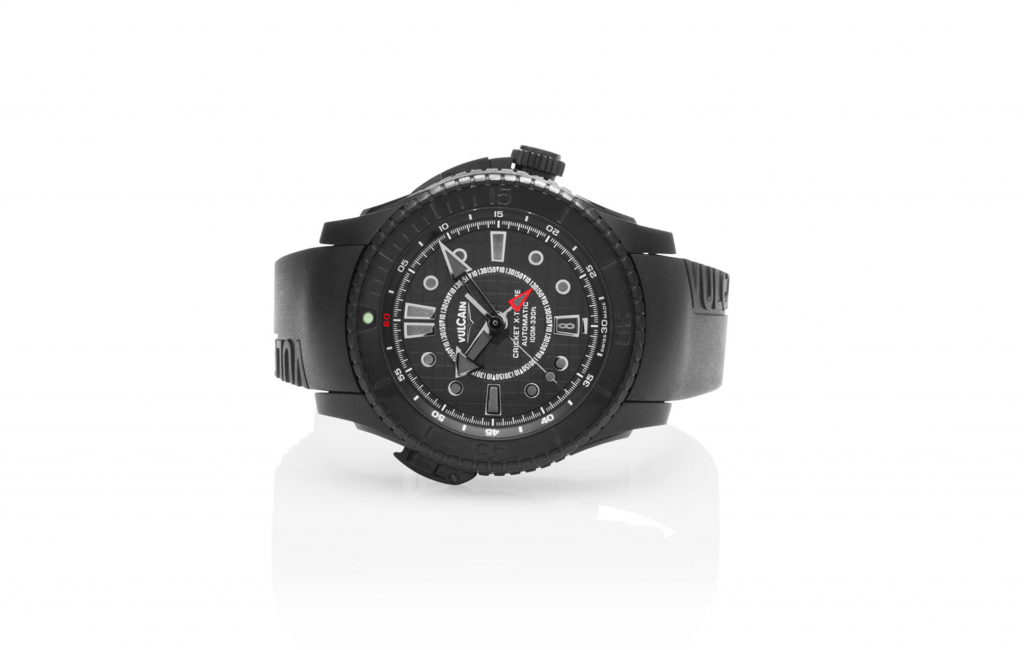 All the extra publicity led to the company being started up again in 2001 by entrepreneur Bernard Fleury, whose first act was to reinstate production of the Cricket, the assembly line of which, incredibly, still survived.

It was to receive a major update however, swapping from a manually-winding movement to an automatic, resulting in the new Caliber V-21. While the changeover posed few problems where basic function was concerned, getting the alarm to work took a complete revising. The new movement contains 257 components, 100 more than its predecessor, along with Vulcain’s Exomatic system with its ball-bearing mounted unidirectional rotor ensuring consistent amplitude for better precision.

The alarm is now provided by an arm striking an anvil supported by a balance spring and the entire movement is beautifully finished, in contrast to the rather utilitarian appearance of the original.

The V-21 can now be found inside a number of Vulcain watches, ranging from the retro-inspired ‘50s President’ collection to the full-on sports piece, the Cricket X-Treme.

They, and the rest of the brand’s extensive family of beautifully crafted models, have enlivened a manufacture with a fascinating history and bright future. Their elegantly handsome watches have set the standard for mechanical alarm pieces for decades and they have a real charm to them in the modern age.

The Rolex Day-Date may have unofficially adopted the name, but it is the Vulcain Cricket which still remains the real president’s watch.

One Response to “The History of the Vulcain Cricket: The First President’s Watch”