All About the Moonphase Complication and How to Set Moonphase Watches

Among all of the various complications in watchmaking, there are few more visually striking than the moonphase. As its name suggests, a moonphase complication tracks the different stages of the moon as it progresses throughout its lunar cycle. The complication itself dates back to the early days before street lights when the current phase of the moon was directly proportional to how much light you could expect at night.

These days, the actual real-world practicality of a moonphase complication is relatively minimal; however, the aesthetic value they provide to luxury watches that feature them is something that daws the hears and imaginations of many modern-day collectors. Want to learn more about these fascinating and beautiful astronomic complications? Below is everything you need to know about moonphase watches and how to set them. 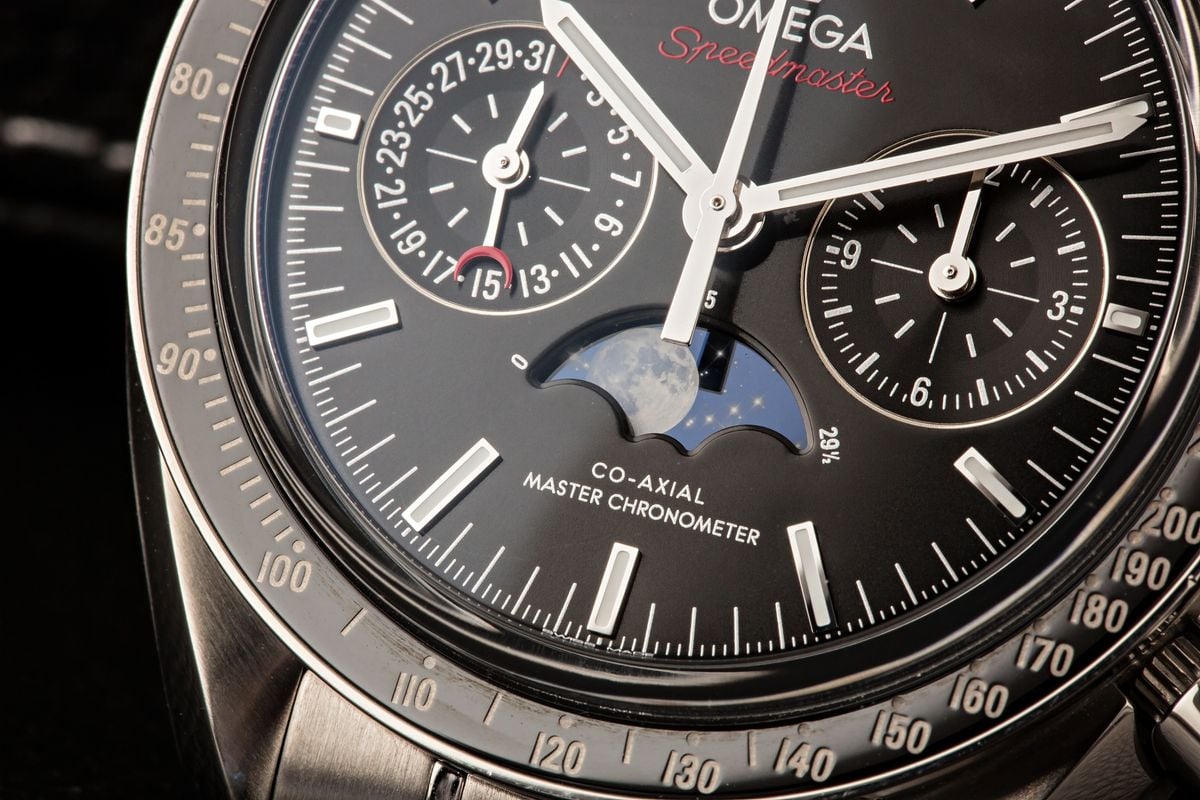 History of the Moonphase complication

Watchmaking isn’t just about the tracking of time, but also the appreciation of it. Those that find these mechanical masterpieces over which we fawn so compelling, often have a deep interest in existential musings. And what better vista to muse over than the heavens? The sky above us has inspired our species since the first human gazed upon it and wondered where they fit within the great circle of life. It is little wonder that a complication dedicated to tracking the moon’s transit became the life’s work of many legendary horologists.

The idea of tracking the moon’s journey across the sky (and its ever-changing face) has been around for a long – a very long – time. The earliest known artifact capable of documenting the celestial dance playing out above our heads is the Antikythera mechanism.

The Antikythera mechanism was recovered from a shipwreck off the coast of the Greek Island that gave the creation its name. Its creation’s exact date has yet to be agreed upon, but all estimates place it at over 2,000 years old (with most reckoning it was built sometime between 205 BC and 87 BC). Unbelievably, considering its age, the Antikythera mechanism could predict astronomical positions that would not occur for decades. Furthermore, it was able to track the forerunning four-year cycle that we would now call an Olympiad.

And so for more than 2,000 years, humanity has not only been obsessed with the movement of the heavenly bodies above us but also been able to track them using mechanical devices. However, there was a long road ahead and it would take many centuries for the sufficient miniaturization of this remarkable technology. 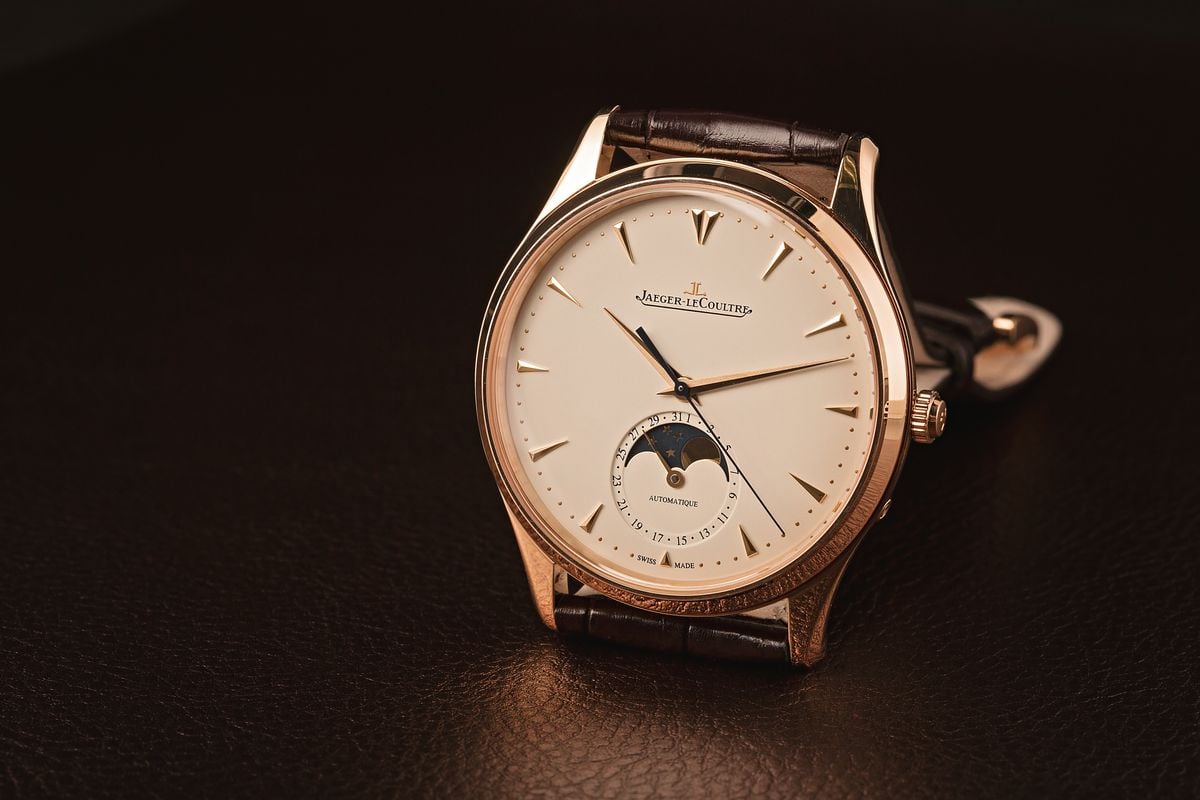 What is a Moonphase?

So why do most companies regard a lunar cycle as 29.5 days long? Well, simply put, it comes down to gearing. If you’ve ever seen a traditional moonphase disc, you will notice that it is adorned with two moons instead of one. Only one of these two moons is ever visible through the aperture through which the phase of the moon can be read. Meanwhile, the other moon is always traveling at the same rate, ready to take over when the other moon wanes, and it is time for the new moon to wax (which means to begin its journey towards becoming a full moon).

Those two moon phases of 29.5 days each can be tracked by a single wheel with 59 teeth. The moonphase disc is connected to the movement’s hour wheel via a series of gears that advance the disc by one tooth per day. Simple! However, as soon as the question of creating a moonphase indicator that can run without correction for long periods is raised, things get a lot more complicated.

Some modern moonphase watches are preposterously accurate. Patek Philippe has famously created a moonphase complication, which remains accurate for 1,000 years. As impressive as that sounds, it is far from the most accurate moonphase ever made. That accolade falls to independent Swiss watchmaker Andreas Strehler. He has devised a mechanism that won’t need resetting (assuming the watch continues to run uninterrupted) for more than two million years (or 2,060,757 years to be precise).

Barring the discovery of the fountain of youth or cybernetic enhancements that guarantee immortality (or at least a lifespan counted in millennia rather than years), the watch’s accuracy will outlast its owner and its subsequent owners for approximately 80,000 generations (that’s one heck of an heirloom).

And the funniest thing about Strehler’s Sauterelle à Lune Perpétuelle 2M is that by the time it does need to be reset, the moon will have moved further away from the Earth, and our days will have lengthened by approximately 36 seconds. That makes any improvements upon accuracy more than unnecessary as timekeeping as we know it will be forced to change by then. Strehler achieved the once-thought-to-be-impossible and created a moonphase complication that will remain accurate for longer than the moon is willing to play by the same rules. 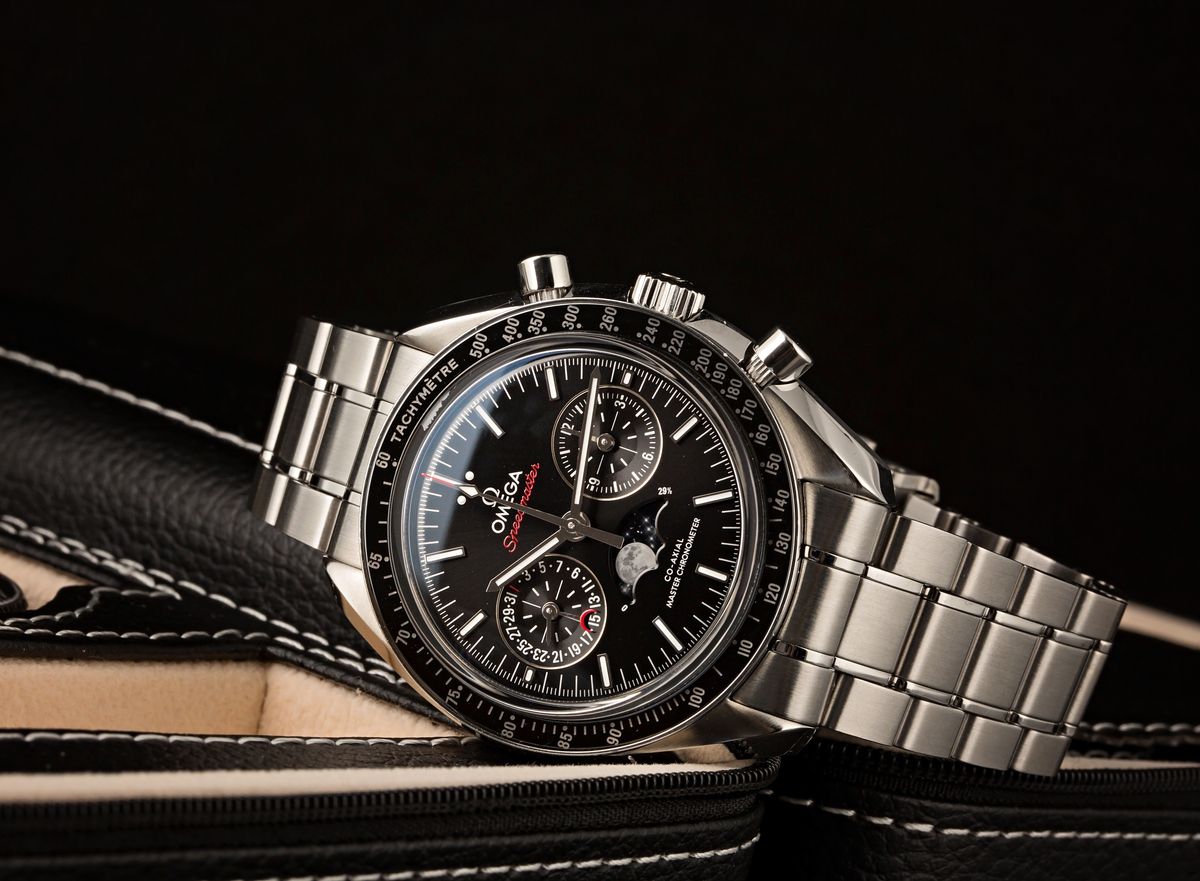 There are countless noteworthy luxury watches that include various different moonphase complications, but below are three of the most famous moonphase watches you are likely to encounter on the secondary market.

When Rolex revived the Cellini line in 2014, the watches were simple, elegant, and weirdly anachronistic for a brand that has largely built its reputation on creating stand-out sports watches on the cutting edge of contemporary design. Part of the reason Rolex veered away from producing increasingly complicated movements (aside from a wish to remain “on brand” – which is essential when you are the brand) was that the higher-ups were keen to minimize after-sales pressures and to continuously up-scale production. Using broadly similar movements, known for their toughness and reliability, made that more feasible.

However, the 2012 release of the Sky-Dweller annual calendar/GMT watch must have whet the brand’s appetite to try something new. While the Cellini range got out of the gate to a slow start, the 2017 release of the Rolex Cellini Moonphase upped the collection’s game considerably. While not supremely complicated, the display of the Rolex Cellini Moonphase is unusual. Instead of a 59-toothed wheel carrying two moons on successive lunar transits, the blue enameled disc of this striking dress watch rotates just once every 29.5 days. The new moon is represented by a silvered outline opposite a 3D manifestation of the full moon crafted from a piece of genuine meteorite. Just beneath the centrally-mounted hands and atop the moonphase aperture, a polished rose gold arrow shows you which part of the display you should be looking at.

It is a far more artful and poetic interpretation of a moonphase display. As it does not show the moon’s changing shape, it has a completely different character from most moonphase indicators. However, given the relative uselessness of the complication as a whole, it is perhaps more satisfying to see the technology behind it applied with flair rather than functionality front and center.

With a long and famous star-gazing history (along with being the manufacturer of the Moonwatch), it would have been bizarre had Omega not thought to produce a moonphase complication in some of its watches. The model we’d like to draw your attention to here is the Omega Speedmaster Professional Broad Arrow Moonphase. In the mid-eighties, Omega decided to add a moonphase to its classic Speedmaster line. It made sense – the Speedmaster was the go-to watch when it came to lunar exploration. It was almost unbelievable that the Speedmaster hadn’t been outfitted with a lunar tracker before.

The traditional layout, which features sub-dials at all four cardinal points, was often employed to great effect with these Omega watches. A nicely balanced dial with a tremendous amount of information displayed in a clean and legible format made them very popular since their discontinuation. Nowadays, the moonphase complication is deployed on a more minimalist display, usually popping up at 6 o’clock in its own, specially-shaped aperture, and paired with the traditional “bi-compax” sub-dial arrangement at 3 and 9 o’clock.

Unsurprisingly, Patek Philippe, perhaps the industry’s most prestigious company, has entered the moonphase arena with more than one impressive offering. There have been many moonphase complications added to the classic Calatrava line, but one of the sleeper hits within the brand’s past portfolio is the Patek Philippe Nautilus 5726/1A-010.

While often thought of as a sporty three-hander, the Nautilus has the necessary wrist presence to carry off a typically delicate complication like the moonphase without it looking forced or incongruous. In fact, on the silver dial reference, it is particularly attractive and perfectly straddles the divide between contemporary and classic. Released in 2013, the Nautilus 5726/1A-010 now sells for close to six figures, with pre-owned prices often in the region of $80,000 to $90,000. If you are looking for a classic piece with peerless design credibility, this could be an option for you. 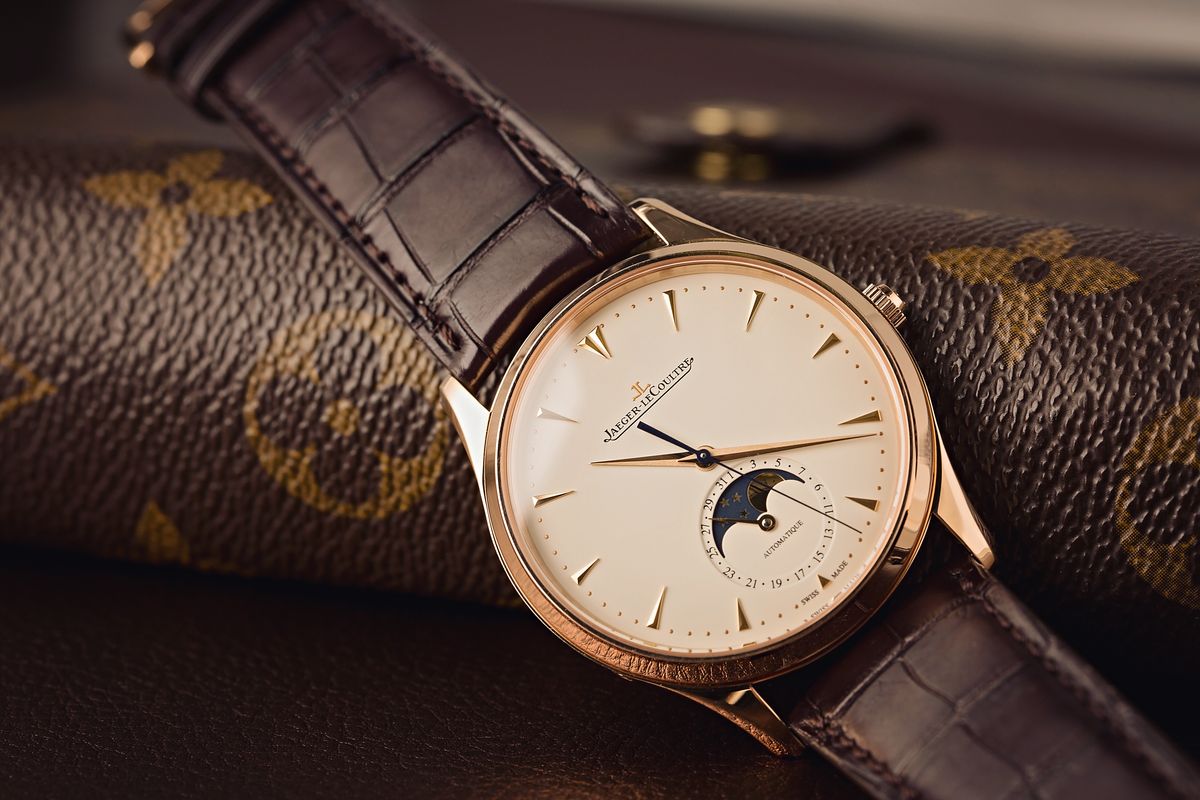 How To Set a Moonphase Watch

As there are many different types of moonphase complications with varying degrees of accuracy and complexity, setting each mechanism to the correct phase of the moon varies. Some indications are advanced by pushers, some by the crown alone. Below, we’ll run through a general setting process that we hope will be of use to you. Please check this advice against the manufacturer’s guidelines to ensure it applies to your moonphase complication.

1. Before you set your moonphase complication, pull out the crown, and move your hands to the lower half of the dial. This removes any chance that their position could cause damage to the movement when you alter the moon disc (this is unlikely, but it is a precaution worth taking).

2. Based on the assumption your moonphase complication uses the 29.5-day model, each tooth represents one day in the lunar cycle. If your moonphase is advanced by depressing a pusher, then this is simple enough to track while setting. Use of a pusher to advance the phase of the moon is a very common method of implementing this complication, and even the Rolex Cellini Moonphase has a pusher to advance the moon disc my “one-day” increments.

3. The easiest way to set the moon phase is to check the phase of the moon online, and you can find a useful lunar tracker via a number of astronomy-related websites. Then orientate the disc so that the full moon is showing. From this point, you can easily set the moon disc accurately by referring to the moon phase online and matching the phase displayed on your watch accordingly.

4. Let’s say five days have passed since the last full moon. Orient the moon disc, so the full moon is at the top (and completely visible through the aperture). Then advance the moon disc by four days. Next, if your watch has a date, set it to one day behind the current date (yesterday). Finally, pull out the crown to the time-set position and move the hands past midnight, so the date jumps forward to today’s date. The moonphase should advance around this time to show the lunar stage five days after the full moon has passed. 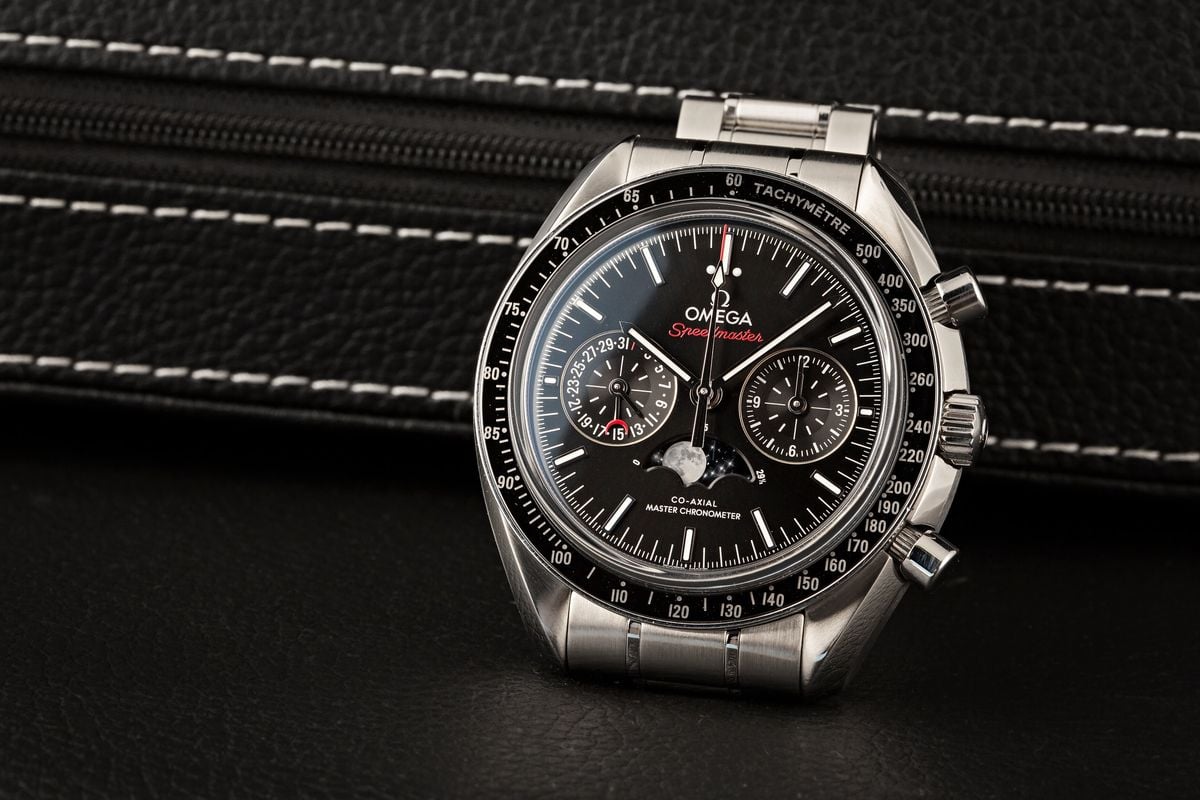