The Omega Speedmaster is easily the most famous and collectible member of the iconic brand’s lineup. Since their initial introduction in 1957, Speedmaster watches have been manufactured in an impossibly diverse range of shapes and forms and powered by everything from classic, manually-wound movements, to state-of-the-art, analog/digital hybrid quartz movements that pack an impressive list of features and functions.

Today, Omega’s collection is larger and more diverse than ever with the Speedmaster line making up a sizable portion of the brand’s catalog. While the Speedmaster comes in many flavors, what ties all these together is the chronograph functionality. All Omega Speedmaster watches, regardless of the specific model, are chronograph watches.

It’s no secret that the Omega Speedmaster range can be overwhelming, especially for newer fans of the model. So with that in mind, here is a quick overview of the different Omega Speedmaster watches that are currently in production.

About The Current Omega Speedmaster Collection 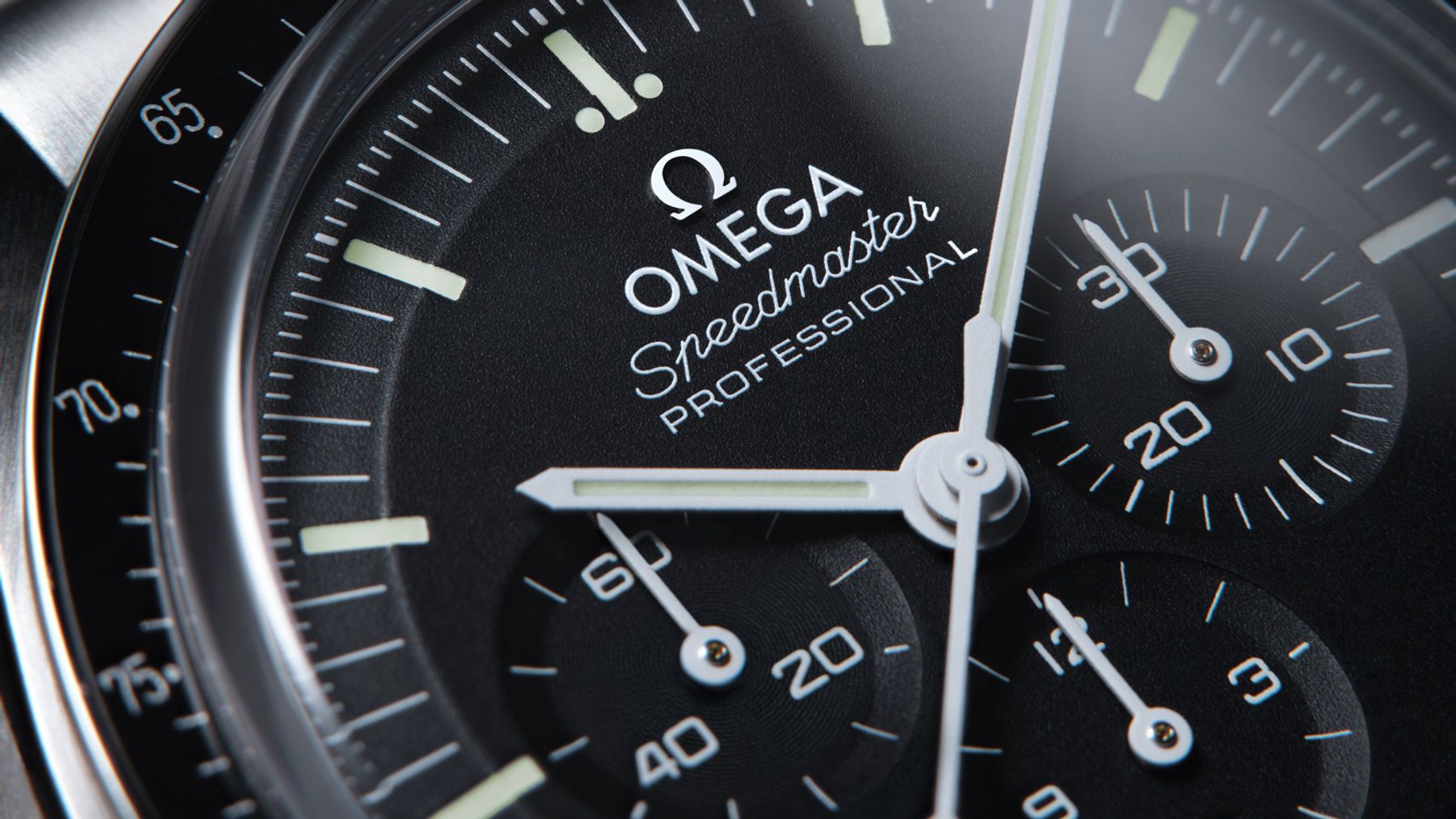 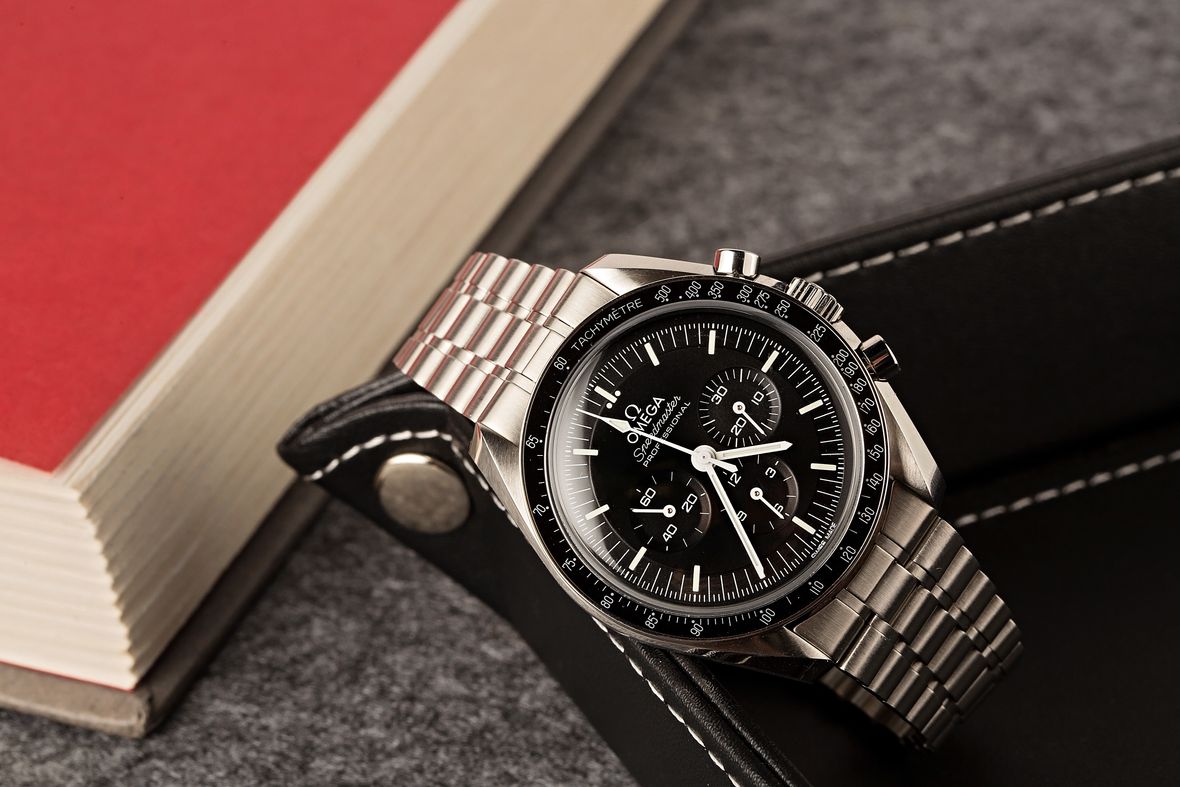 The Moonwatch Professional is the most classic and traditional iteration of the Omega Speedmaster that remains in existence today. It of course takes its “Moonwatch” name from its historic journey to the Moon in 1969 with the Apollo 11 crew. Today’s Speedmaster Moonwatch Professional chronographs are direct descendants of those space-exploring models; therefore, they retain all the signature design details like 42mm cases, dials with three counters, bezels with tachymeter scales, and manual-winding movements inside.

However, the current lineup has expanded to welcome other metal options aside from stainless steel including yellow gold, white gold, and red gold. Furthermore, while purists will argue that a “true” Moonwatch will have a Hesalite crystal on the front and a solid caseback on the back, Omega does also offer models with sapphire crystals on both sides. 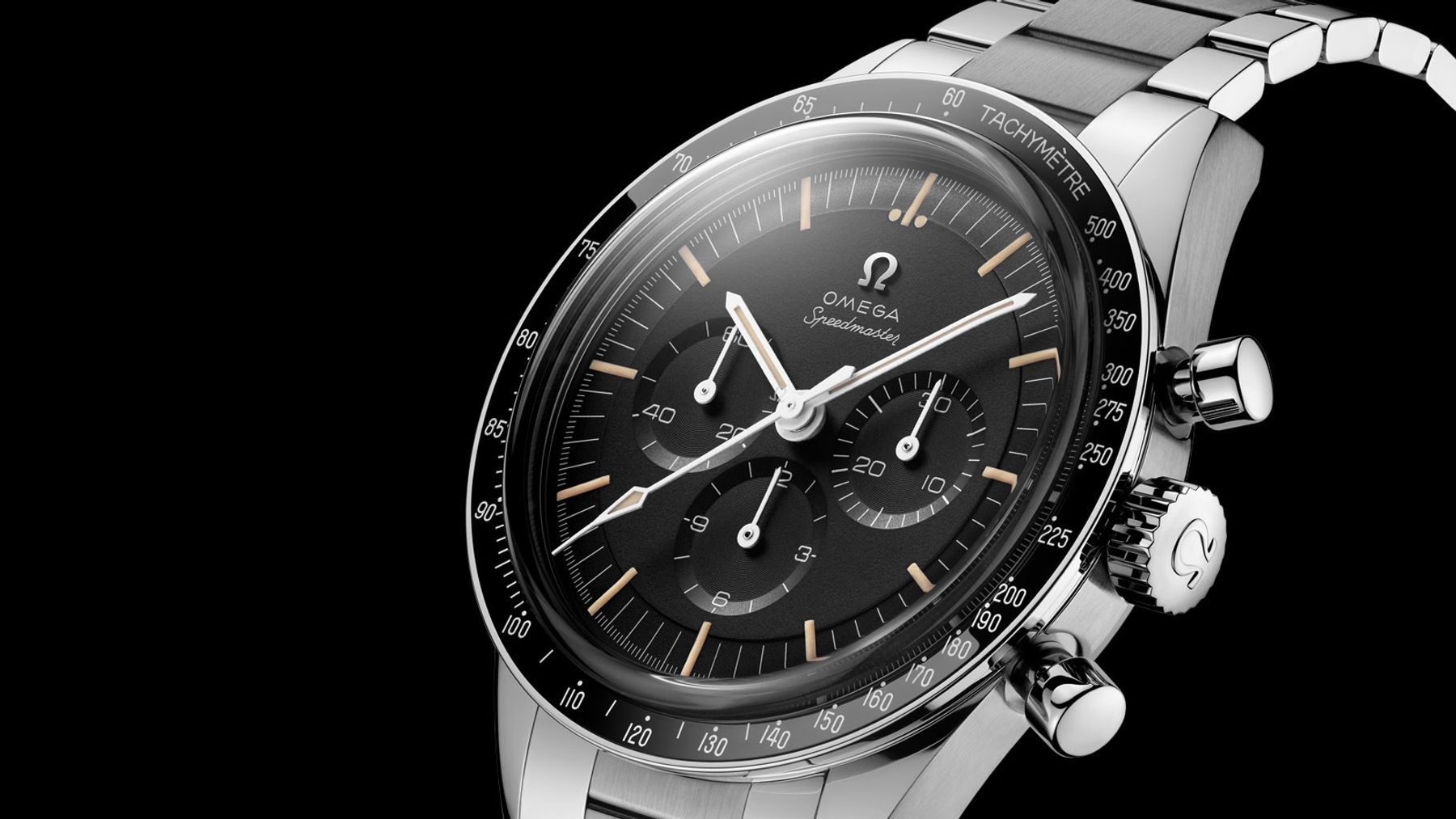 When Omega watches introduced the Speedmaster back in 1957, the chronograph was powered by the Caliber 321 hand-wound chronograph movement with a column wheel mechanism. Thanks to its striking looks and mechanical ability, this particular movement is a favorite among watch enthusiasts. Omega stopped using the Caliber 321 in its Speedmaster watches around 1969, replacing it with the easier-to-produce Caliber 861.

In 2019, Omega announced the return of the Caliber 321, and today, the brand has a Speedmaster collection with chronographs that run on this famed movement. The first model that debuted the modern version of Caliber 321 was a 42mm platinum watch, later followed by a 39.7mm stainless steel edition inspired by the Speedmaster reference astronaut Ed White wore during America’s first spacewalk in 1965. There’s also a white gold Speedmaster Calibre 321 and we’d bet that Omega will continue adding more models to this newer Speedmaster sub-collection. 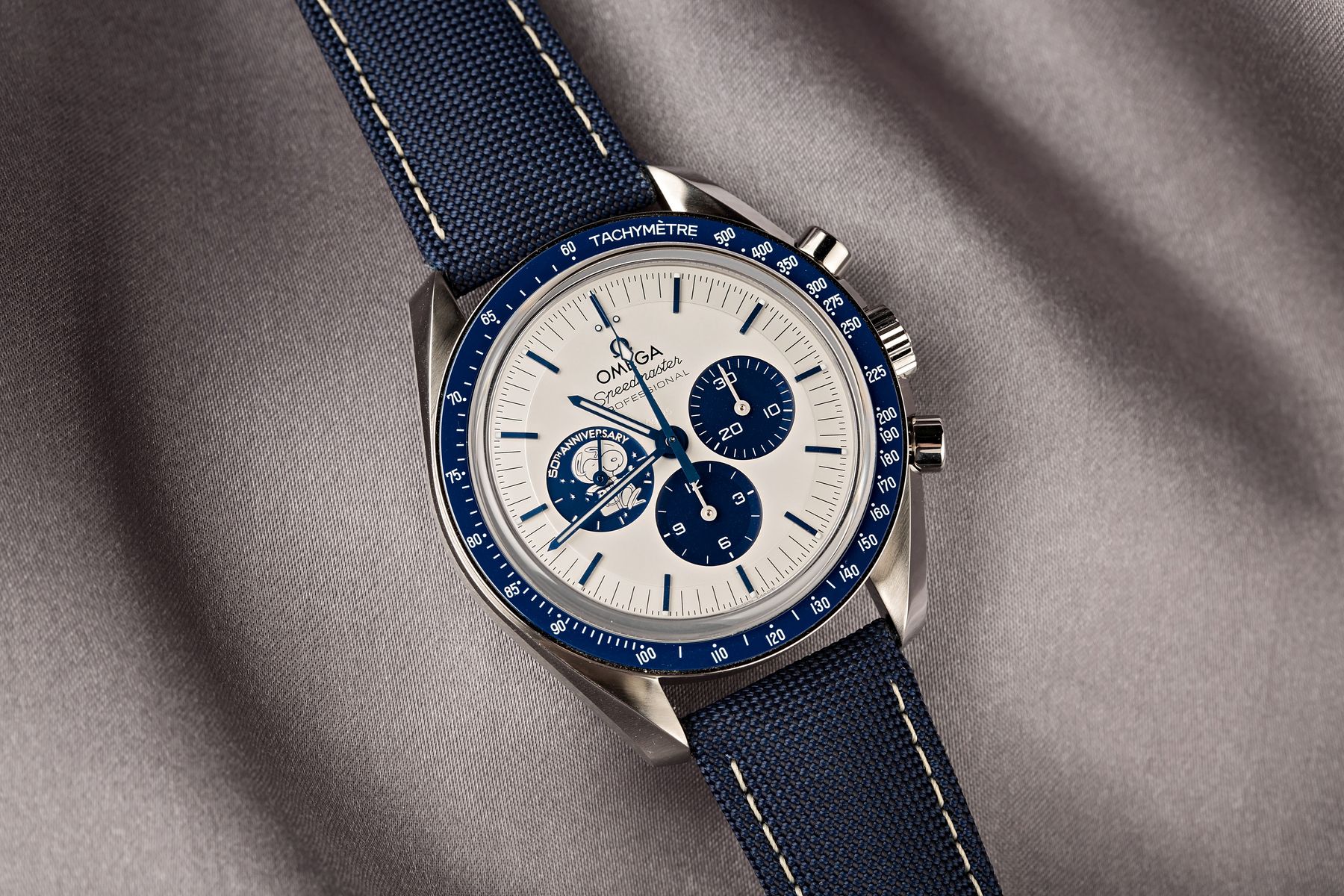 The Speedmaster Anniversary Series is exactly what it sounds like — a collection of commemorative chronographs that celebrate Omega milestones in the context of space exploration. For instance, there’s the sought-after Speedmaster “Silver Snoopy Award” 50th Anniversary model, which is dedicated to the award NASA gave Omega in 1970.

There are also Speedmaster Apollo 11 50th Anniversary models, as well as Speedmaster “First Omega in Space” models also known as FOIS. Omega is no stranger to issuing special edition watches so the Speedmaster Anniversary Series has plenty to offer. 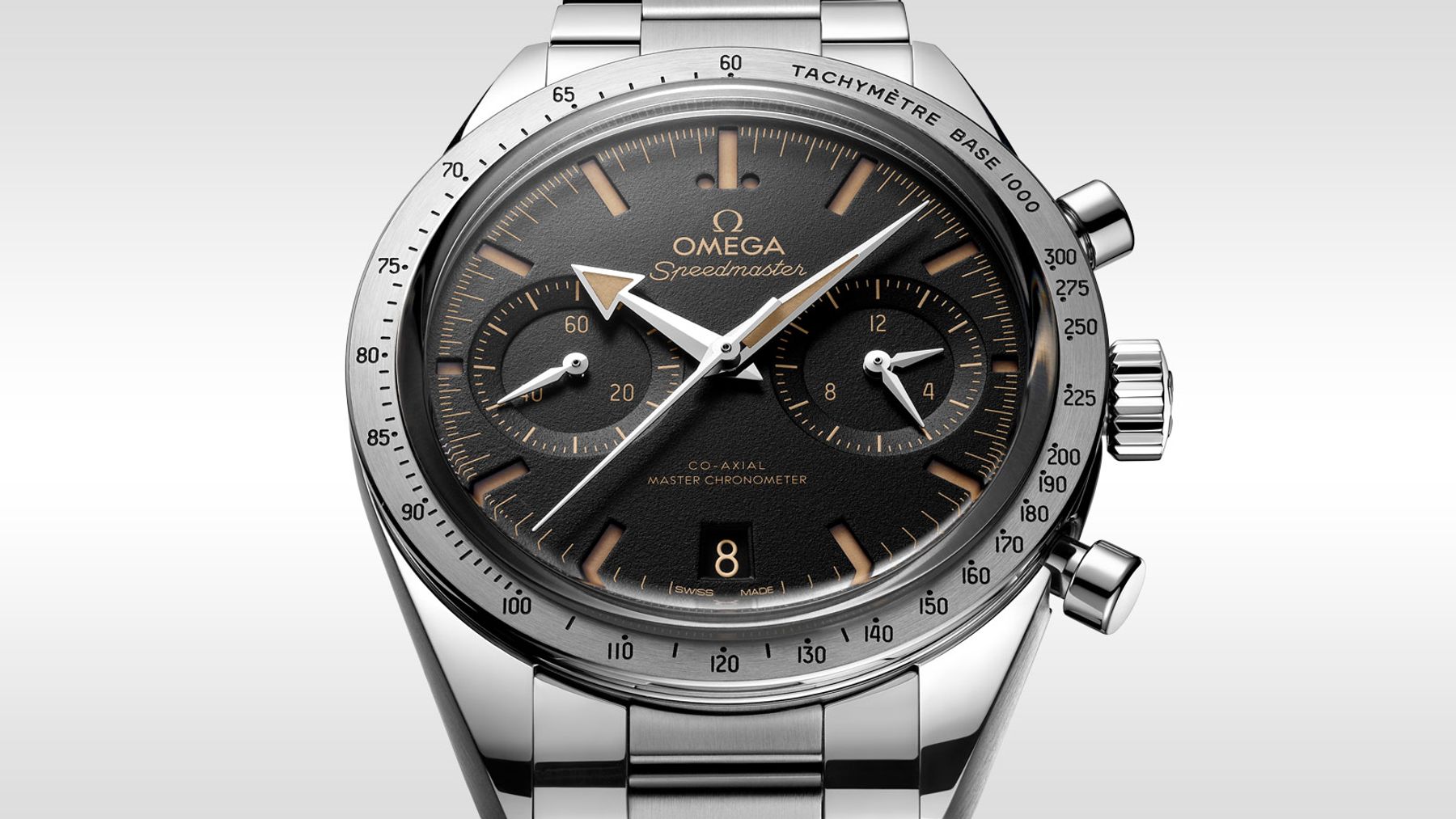 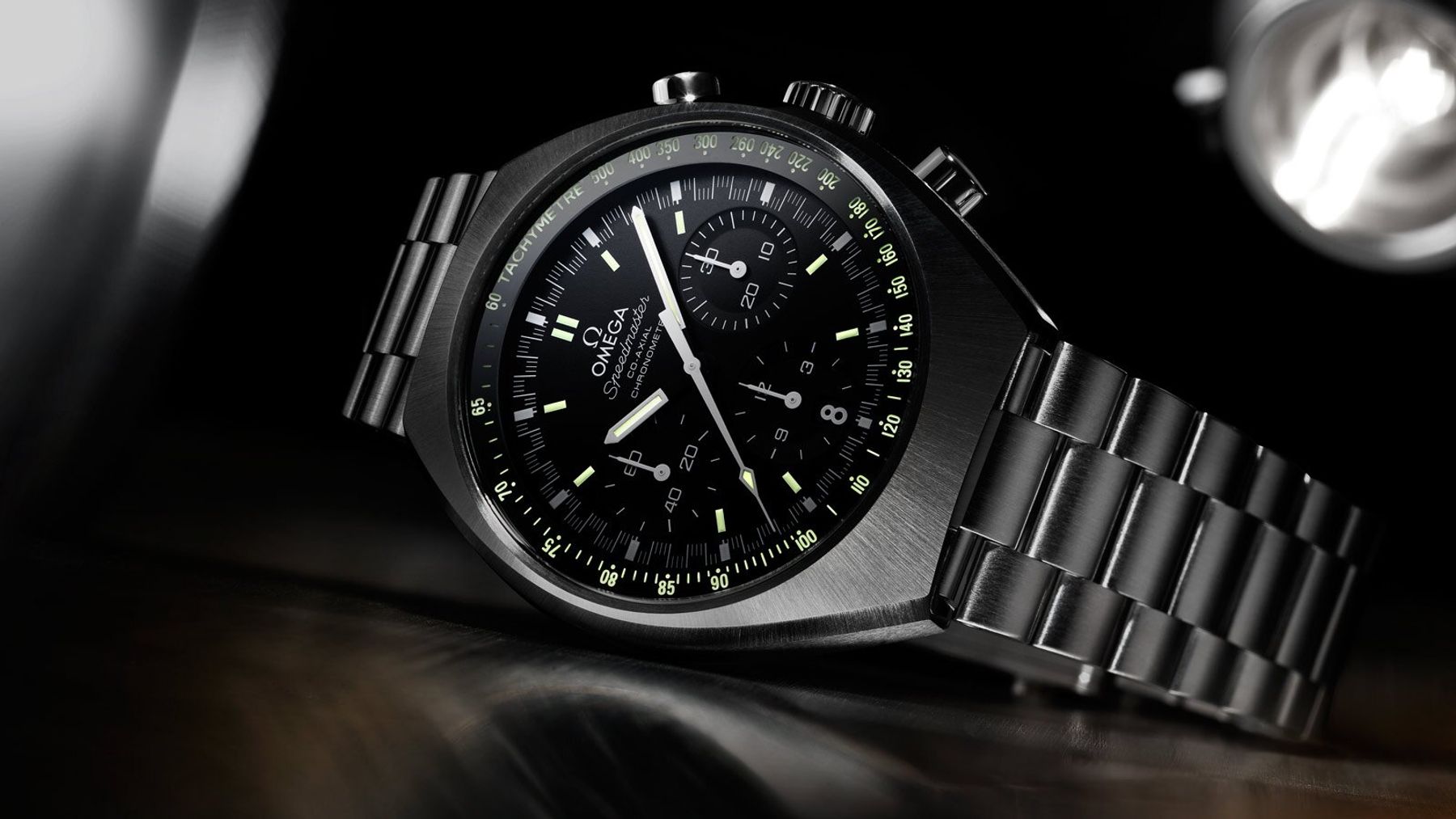 The Mark II Speedmaster first made an appearance in 1969 and offered a fresh take on the classic design of the Omega Speedmaster Moonwatch. With its angular case, integrated bracelet, and tachymeter bezel printed on the underside surface of its crystal, the Mark II was a significant visual departure from the traditional Omega Moonwatch. Omega stopped making the Speedmaster Mark II in 1972 but brought it back in 2014.

The contemporary reissues of the Omega Speedmaster Mark II retain much of the same overall aesthetic of the original model from 1969 but with some significant updates. For instance, modern Mark II Speedmaster watches are now automatic chronographs and include a date window. Furthermore, the case was slightly redesigned and measures 42.4 X 46.2mm and is now topped with sapphire crystal instead of a mineral one.

Speedmaster Dark Side of the Moon 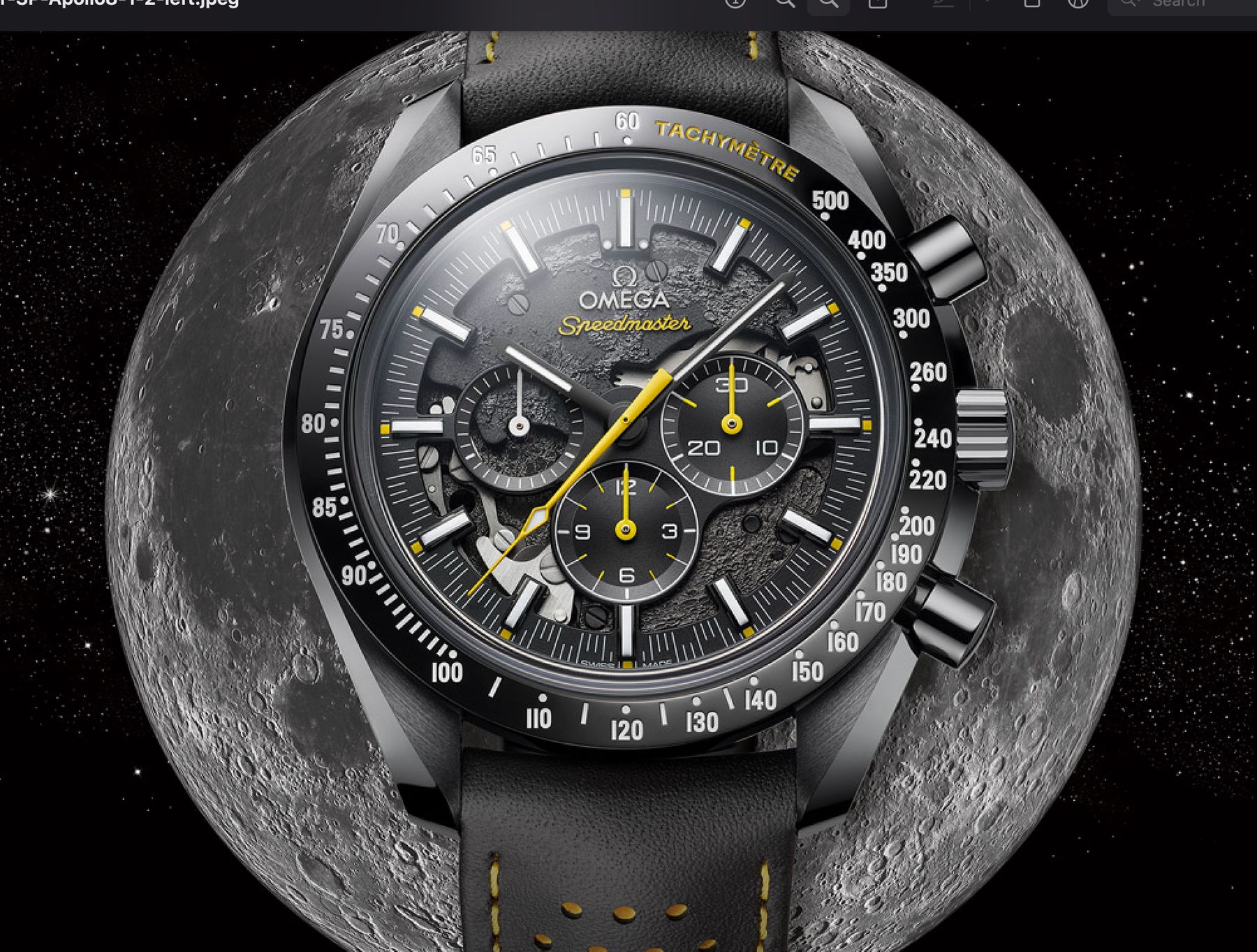 The defining feature of the Speedmaster Dark Side of the Moon, which was introduced in 2013, is a ceramic case. While the first model presented was an all-black ceramic Speedmaster, Omega has expanded the collection to include other colored ceramic cases too. 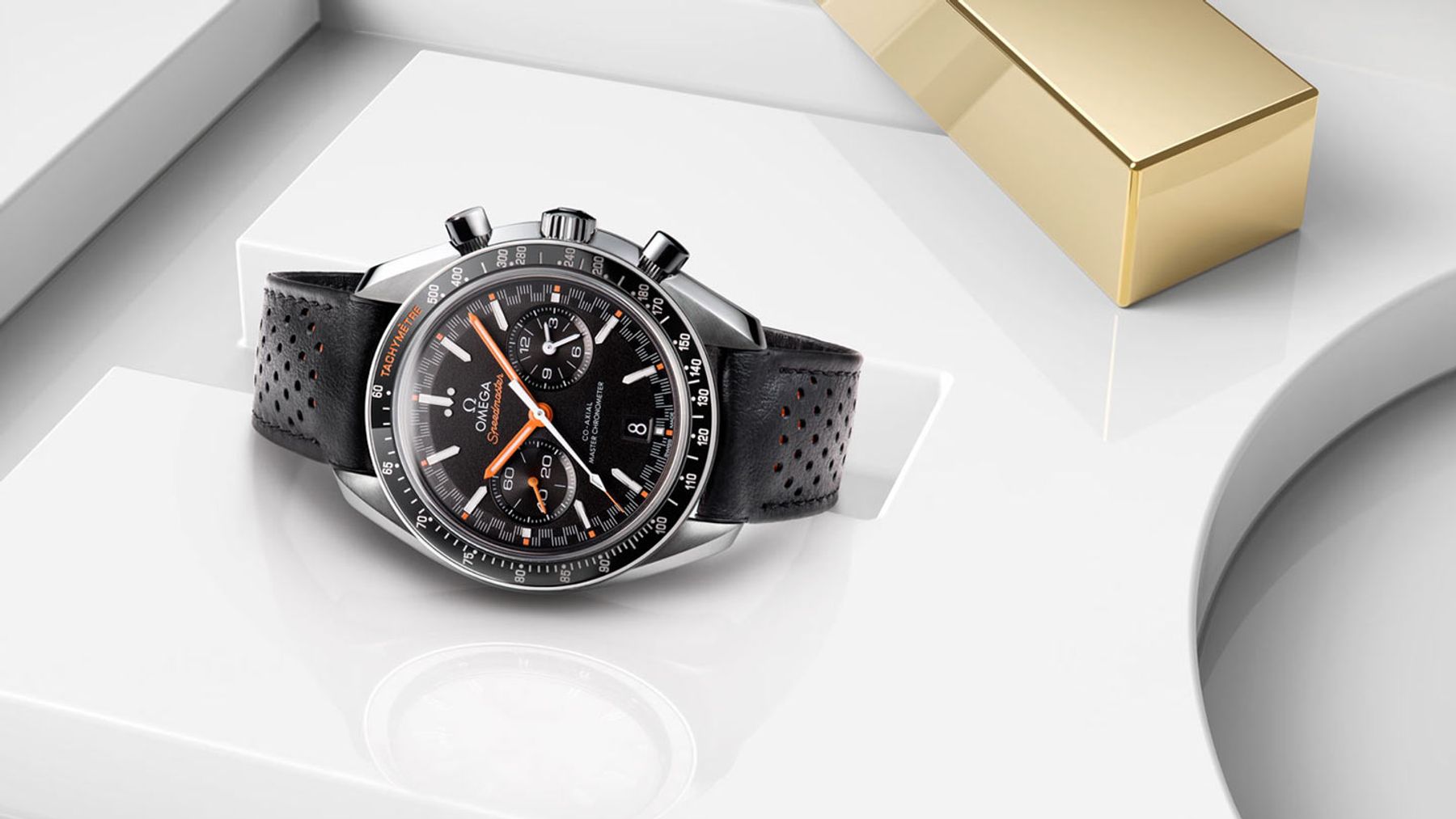 The Racing collection pays tribute to the Speedmaster’s connection to the world of motorsports. Before it became famously associated with astronauts, the moon landing, and space exploration, it was a chronograph intended for the automobile-racing crowd. With splashes of bright colors and other racing-themed design touches, such as a checkered, “alternating” minute track, the contemporary Omega Speedmaster Racing collection (which debuted in 2017) returns to that inspiration. 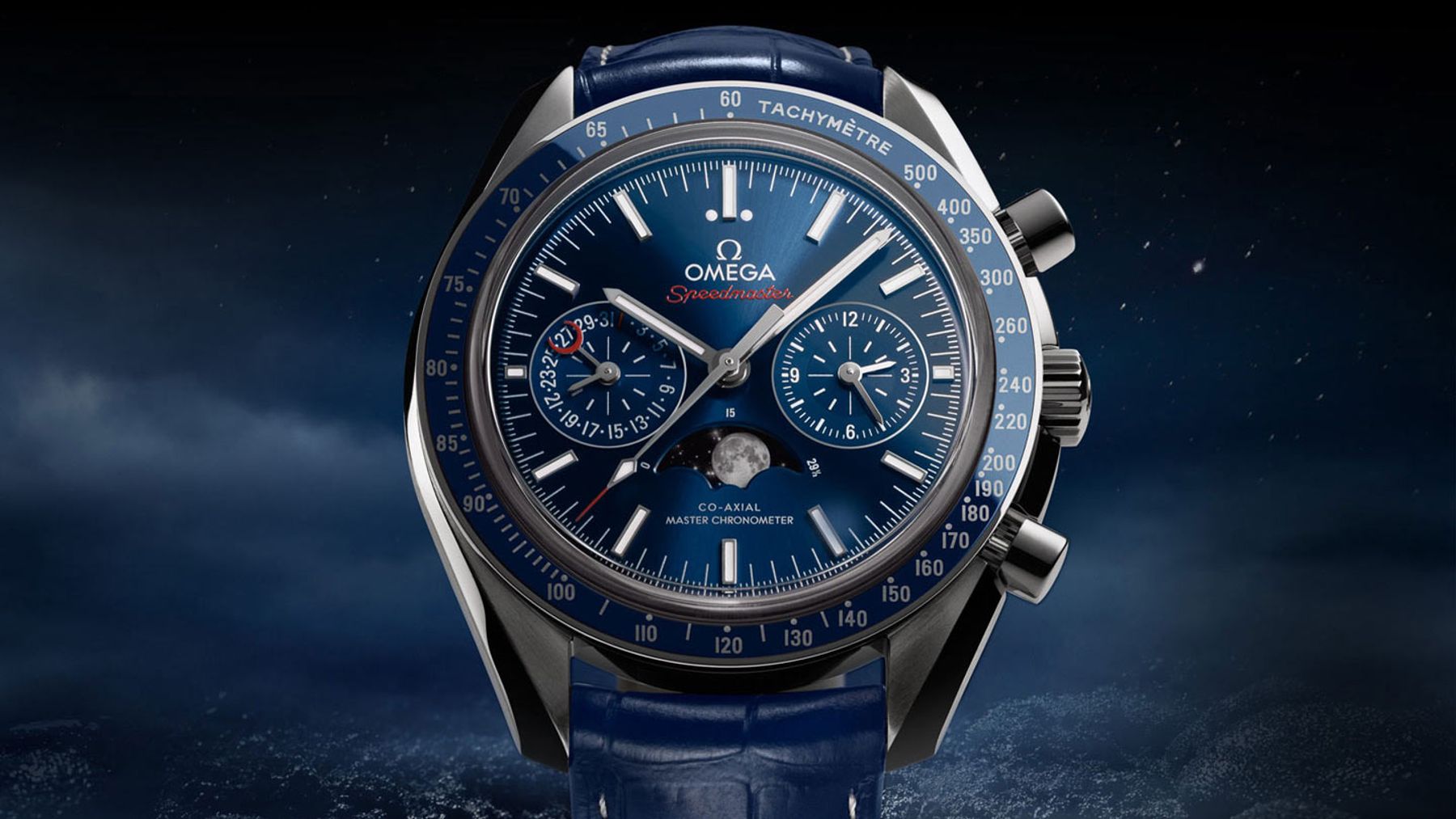 Out of all the additional complications a Speedmaster chronograph could have, a moon phase display is perhaps most fitting—after all, Omega does like to remind us that the Speedmaster was the first watch to be worn on the surface of the Moon! The first Speedmaster to include a moon phase indicator dates back to around the 1980s.

Fast-forward to today, and Omega still has a Speedmaster Moonphase sub-collection in its catalog, and the current generation debuted in 2016. The Speedmaster Moonphase Master Chronometer chronographs come fitted with 44.25 cases and run on the METAS and COSC certified Caliber 9904 automatic movement. While case materials include traditional picks such as gold and steel, there are also blue ceramic case editions, aptly called “Blue Side of the Moon.” 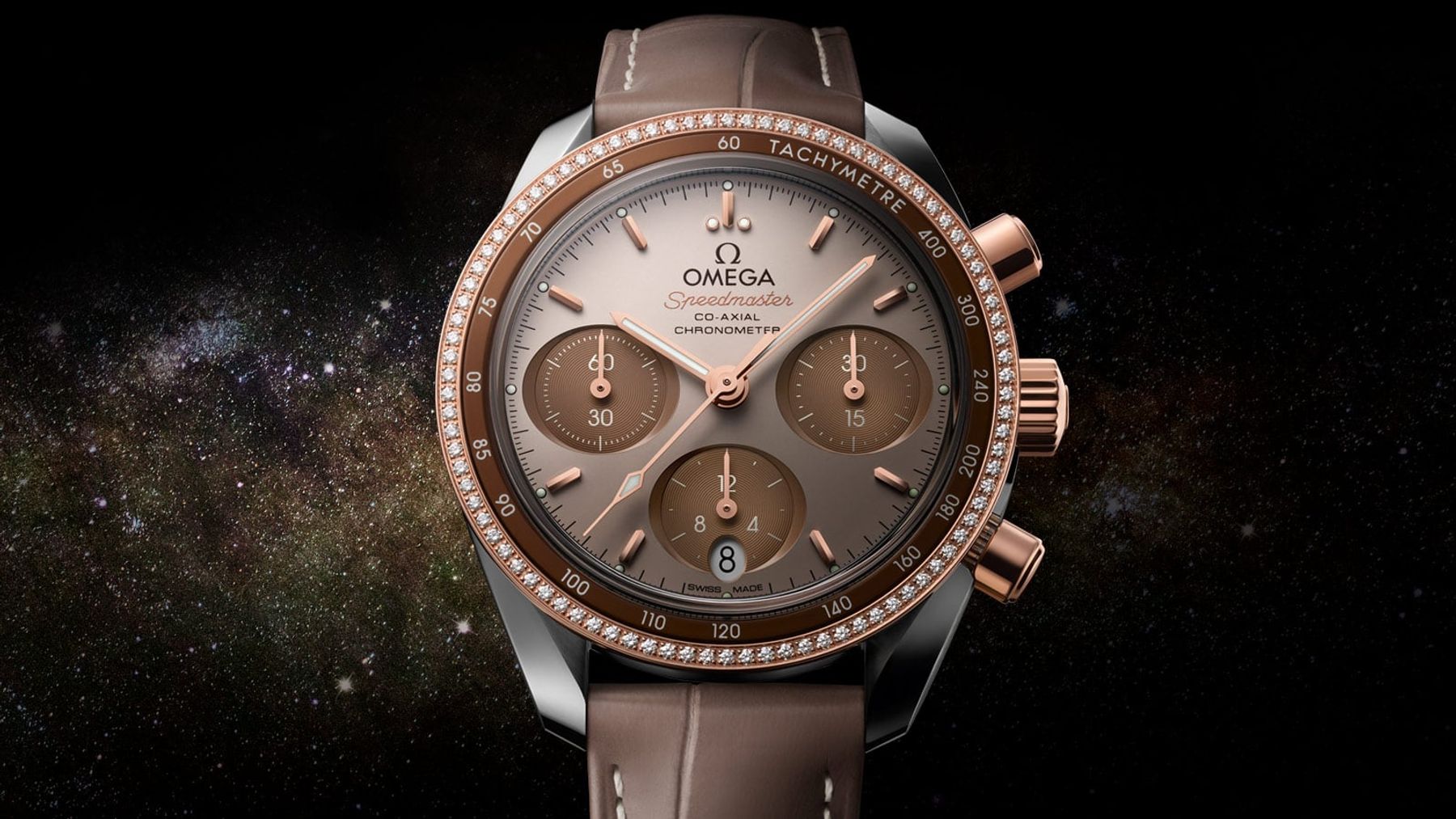 The smallest choice within Omega’s famous chronograph lineup is the Speedmaster 38, with – you guessed it – 38mm cases. One of the defining features of the Speedmaster 38 (which in true Omega form, is available in a slew of colors and materials, as well as the option of diamonds) is the oval-shaped trio of counters on the dials.

There’s one exception to this, however, which is the steel and black Speedmaster 38 model, with traditional round sub-dials – and many will argue that this compact automatic model is the modern iteration of the now-discontinued Speedmaster Reduced line. 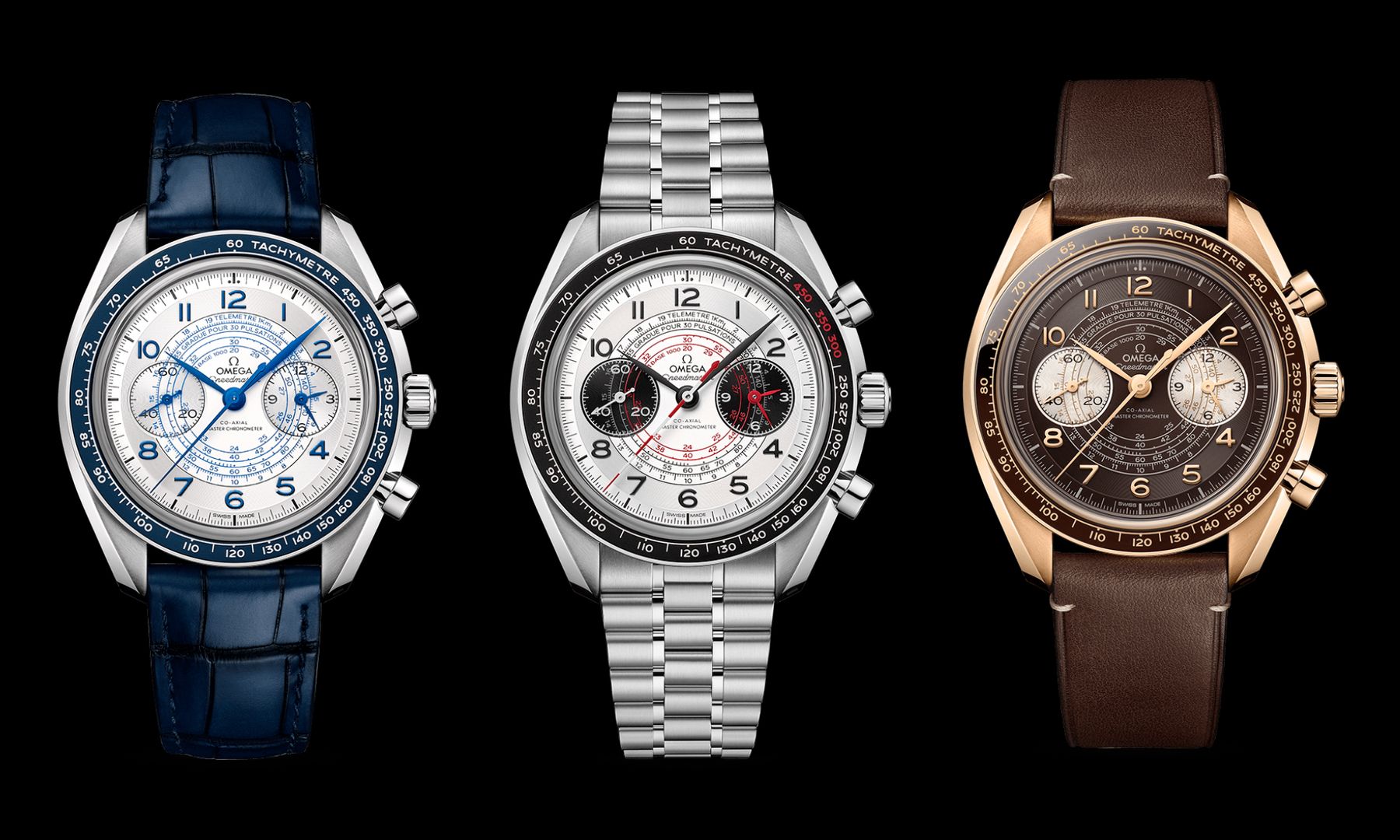 Omega currently makes the Speedmaster Chronoscope in steel or bronze gold, along with a range of dial colors and straps. 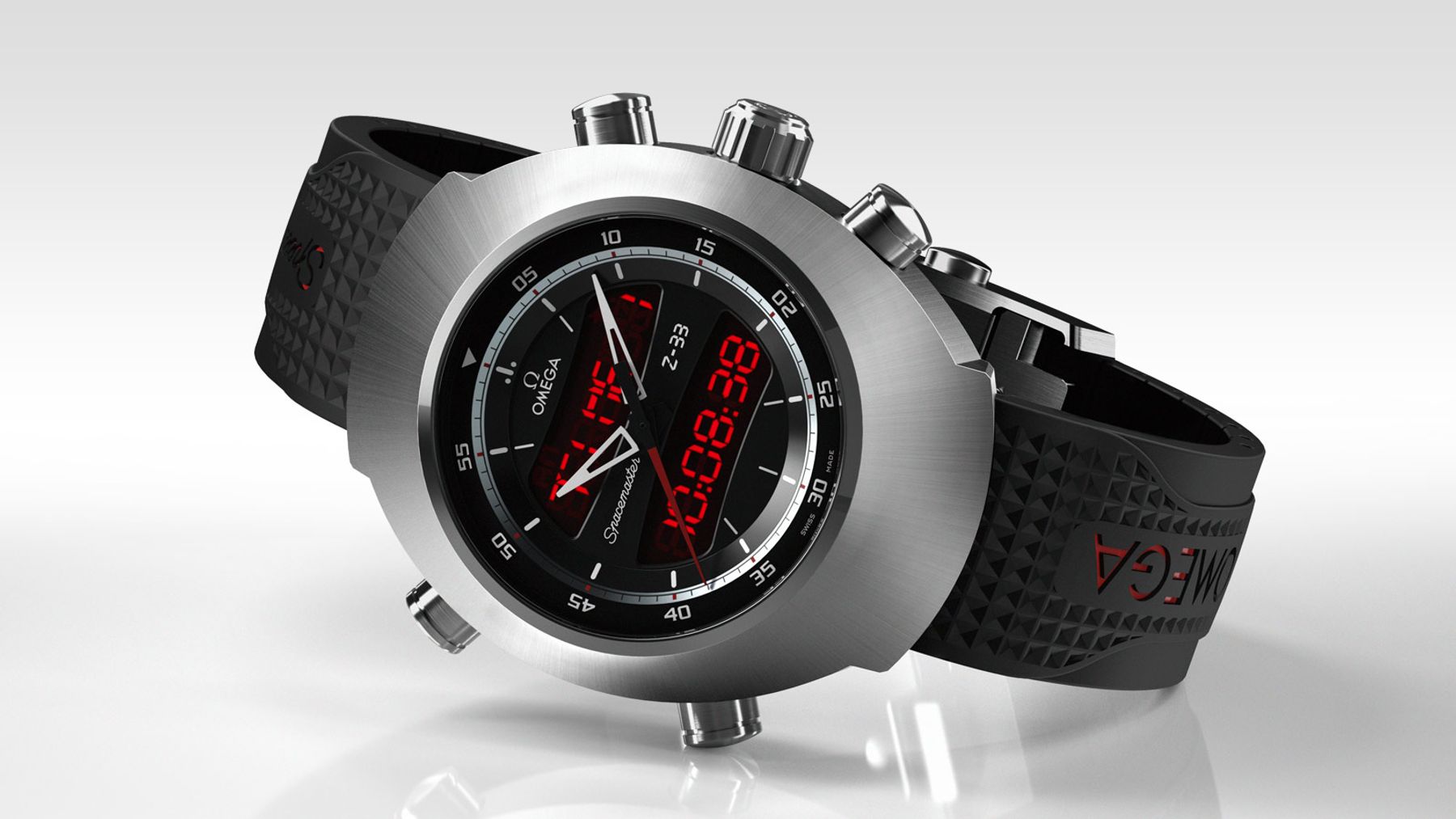 A limited-edition, yacht-racing version of the X-33 also exists (the X-33 Regatta), which swaps out some of the pilot-specific functions of the Skywalker X-33 for some equally advanced features that allow users to keep track of their boat races from pre-start to finish. 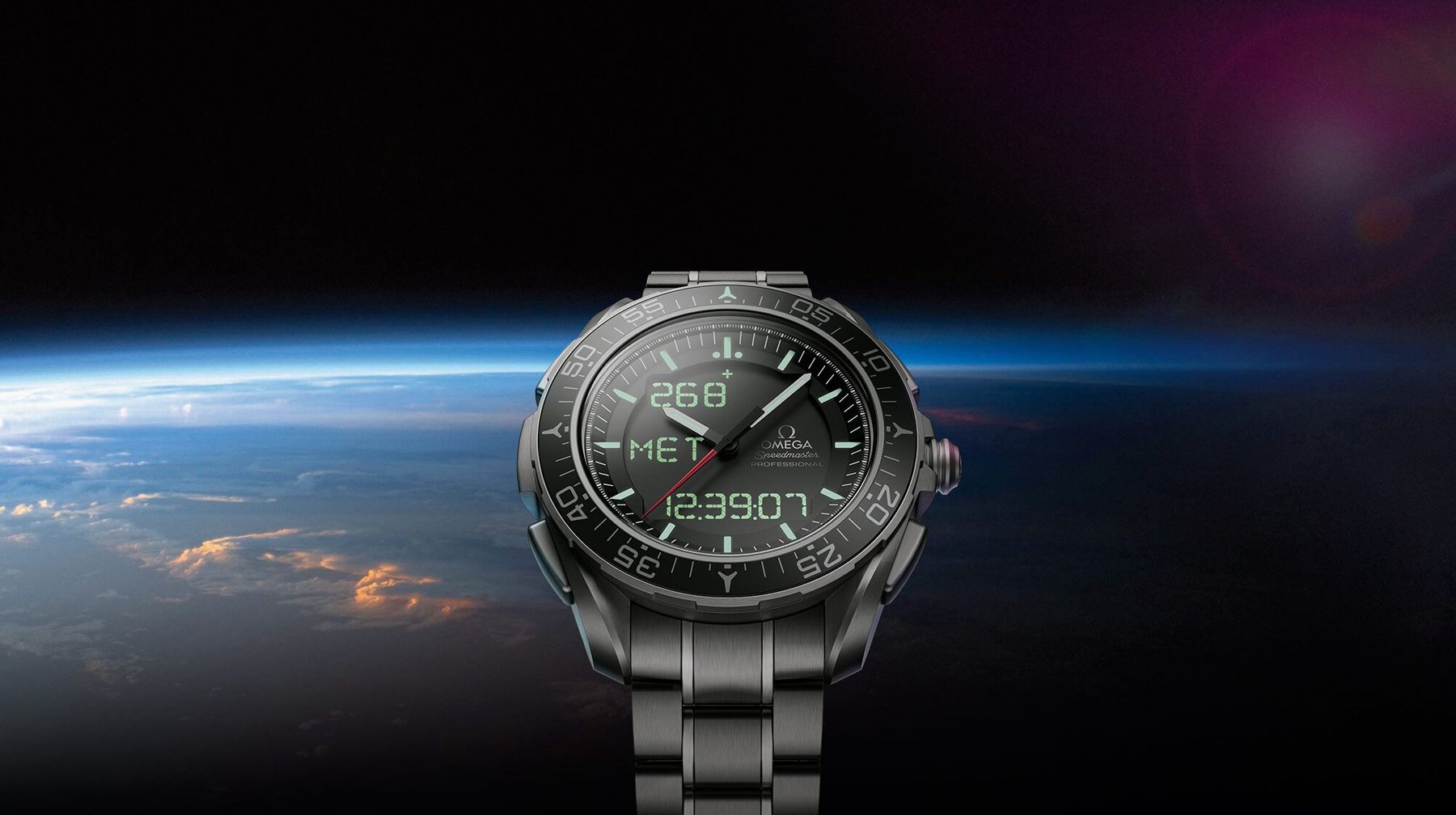 A Speedmaster For Almost Anyone

As we’ve illustrated, the Speedmaster collection is an immense one, offering plenty of variety for almost anyone looking for a top-notch Swiss-made chronograph.

Whether the lunar landing inspired Speedmaster Moonwatch Professional, vintage-looking Speedmaster Chronoscope, sporty Speedmaster Racing, or anything else in between, Omega’s approach to the chronograph is an impressive one.

Previous Article 13 Rolex Watches in Red, White, and Blue to Celebrate Fourth of July
Next Article A Few of the Best Everyday Watches