It’s not the most glaringly obvious association I suppose; the preeminent leaders in space exploration and a lazy cartoon beagle – but NASA and Snoopy actually go way back.

The National Aeronautics and Space Administration actually adopted Charles M. Schultz’s enduring and endearing character in 1968, as a symbol for mission success and a ‘watchdog for flight safety.’ Today, there are numerous Snoopy-related references throughout both space exploration and various Omega Speedmaster watches. Let’s take a closer look at just how we got here. 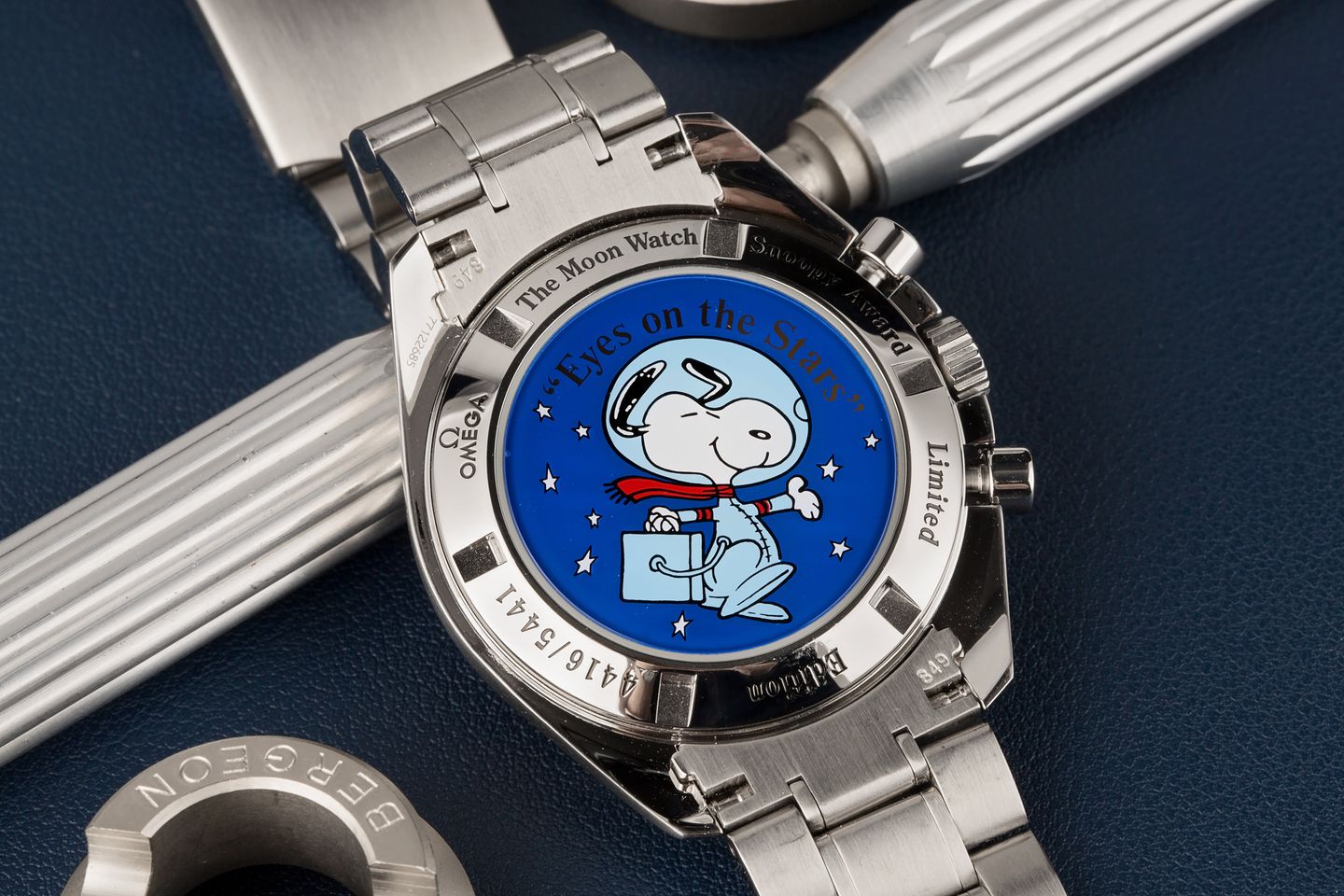 A cartoon beagle and space exploration – why not?

In 1969, Apollo 10 was only the second spacecraft to orbit the moon, on what was essentially a reconnaissance mission. The astronauts involved with the mission nicknamed their lunar module after the cartoon hound as they ‘snooped around’ for a suitable landing site for Apollo 11. The command module was naturally given the call sign, Charlie Brown. That same year, the agency established the Silver Snoopy Award, which is presented to those who make outstanding contributions to the advancement of space travel.

Consisting of a sterling silver Snoopy pin – each one actually carried aboard a NASA mission, along with a certificate and letter of appreciation from astronauts, the Silver Snoopy Award is one of the most prized symbols of recognition in the industry. In 1970, it was bestowed on luxury Swiss brand, Omega for their help in securing the safe return of a potential failure. 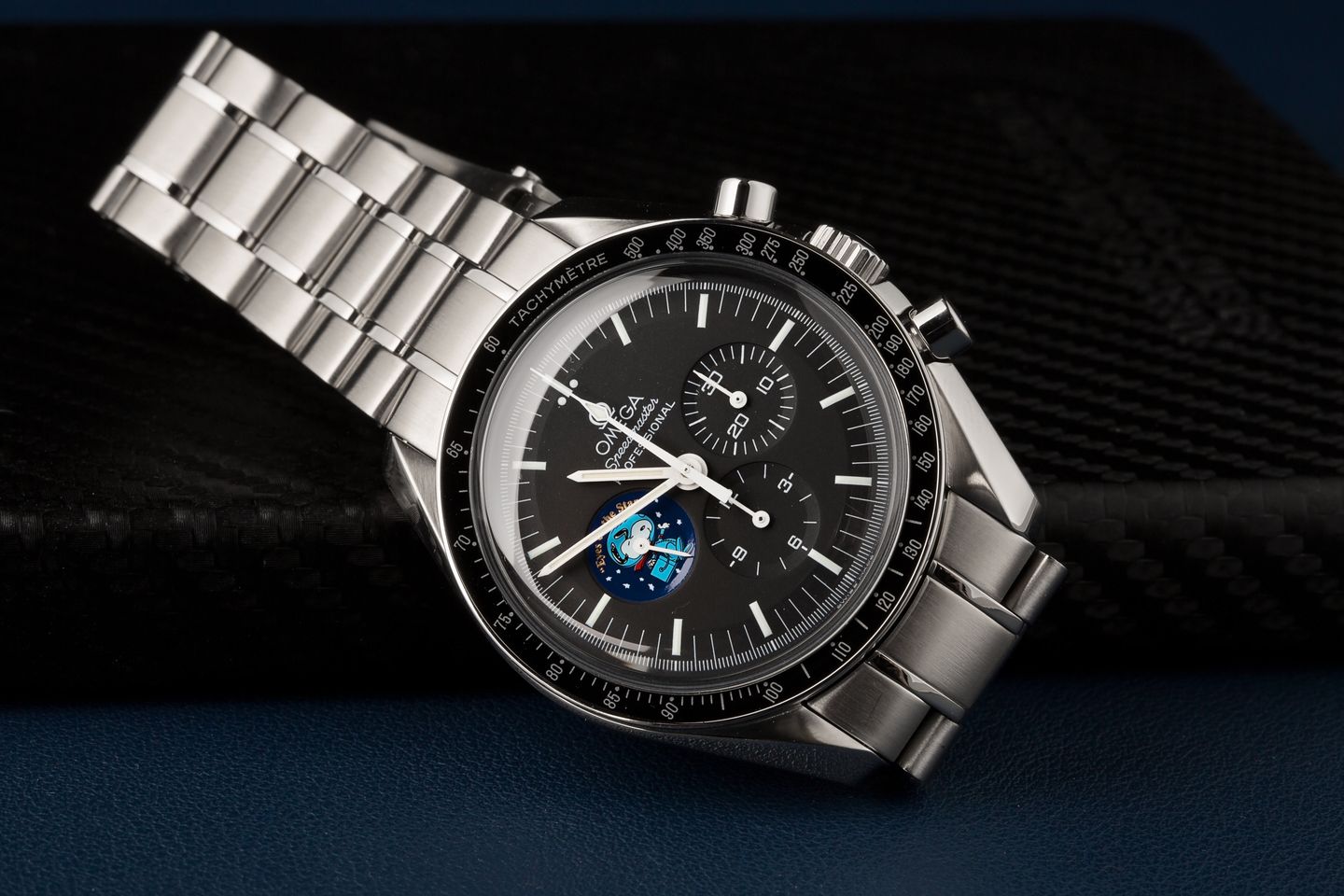 A Omega Snoopy Speedmaster from 2003. Note the cartoon beadle inside the 9 o’clock sub-dial.

The Speedmaster and the Apollo Missions

The Omega Speedmaster’s place in the history books of man’s first tentative steps beyond our planet is well known. The only chronograph able to survive the grueling battery of tests dreamt up by NASA, it became standard-issue equipment in 1965. Four years later it was the first watch worn on the lunar surface, strapped to Buzz Aldrin’s wrist.

But perhaps its most important role to date came aboard the stricken Apollo 13. Popularized in the movie of the same name, it was the luckless outing that came within a hair of disaster, when an explosion in one of the oxygen tanks crippled the ship, forcing the crew to use the Aquarius lunar module as a lifeboat as they limped back to Earth.

It was during the complex re-entry procedure that pilot Jack Swiggert’s Omega Speedmaster was called into service, precisely timing the 14-second bursts of the module’s propulsion engines to correct their course and ensure they penetrated the atmosphere at the right angle. It recognition of this feat, NASA awarded Omega the Silver Snoopy Award. 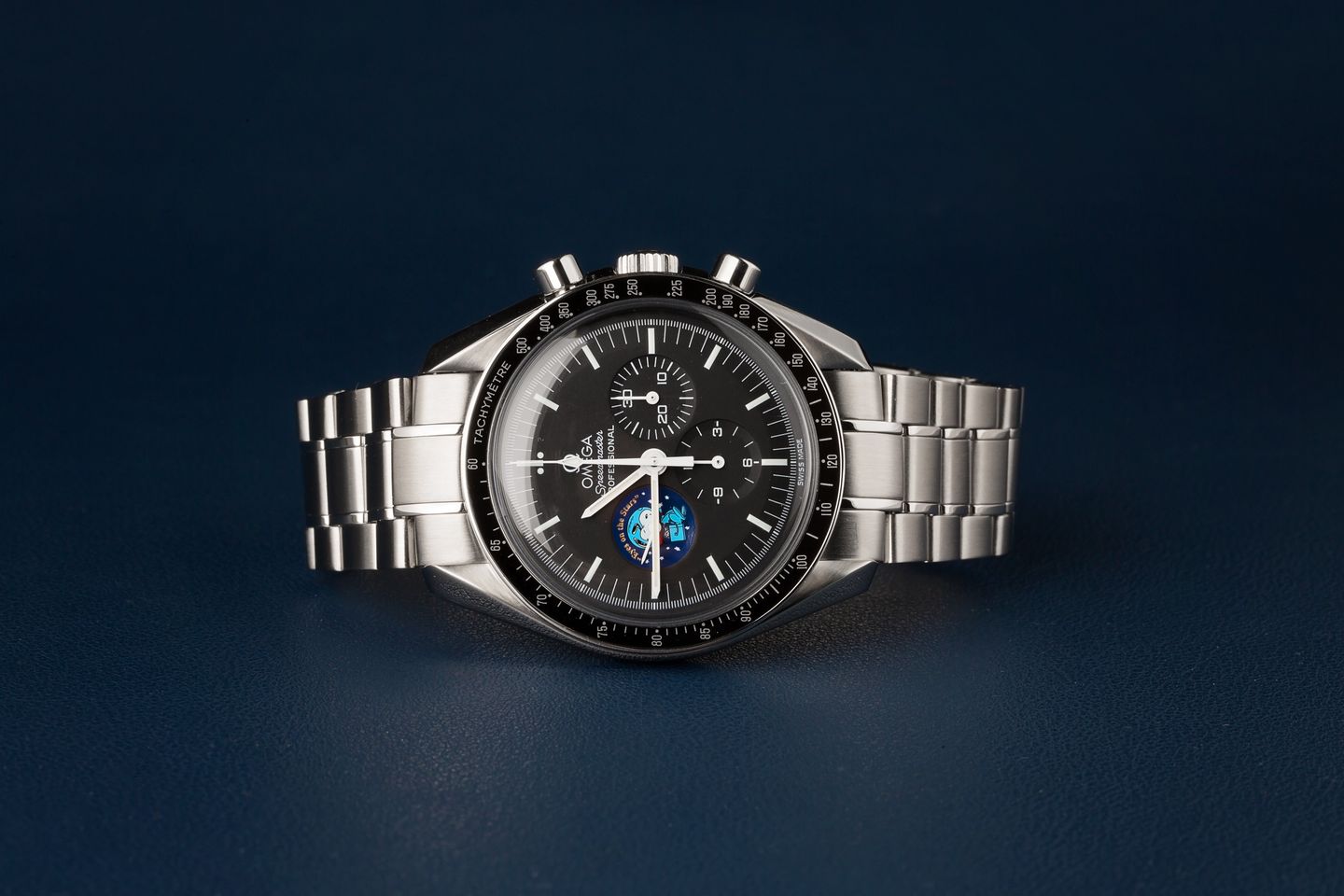 The original Snoopy Speedmaster first made in appearance in 2003.

Strangely, especially when you consider the number of special edition Speedmasters which have been issued over the years, it took Omega until 2003 before they released one commemorating such a high honor. Starting with a regular 42mm Speedmaster Professional 3570.50, the brand created what was technically a limited edition piece, although not really all that limited, seeing as there were 5,441 made. Poignantly, the number was taken from the length of the Apollo 13 mission; 142 hours, 54 minutes and 41 seconds.

Beyond a few details, there was very little difference between the Snoopy model and the standard production model Moonwatch, and the only one immediately visible is on the running seconds sub-dial at the nine o’clock location.

Here you will see the guest of honor – our beloved cartoon beagle – floating through the cosmos, decked out in his blue spacesuit and red flying ace scarf. Above his head are the words ‘Eyes on the Stars’, and it is the same illustration actually found on the NASA award itself, reportedly drawn and donated for free by Charles M. Schultz, a great believer in the Apollo missions. 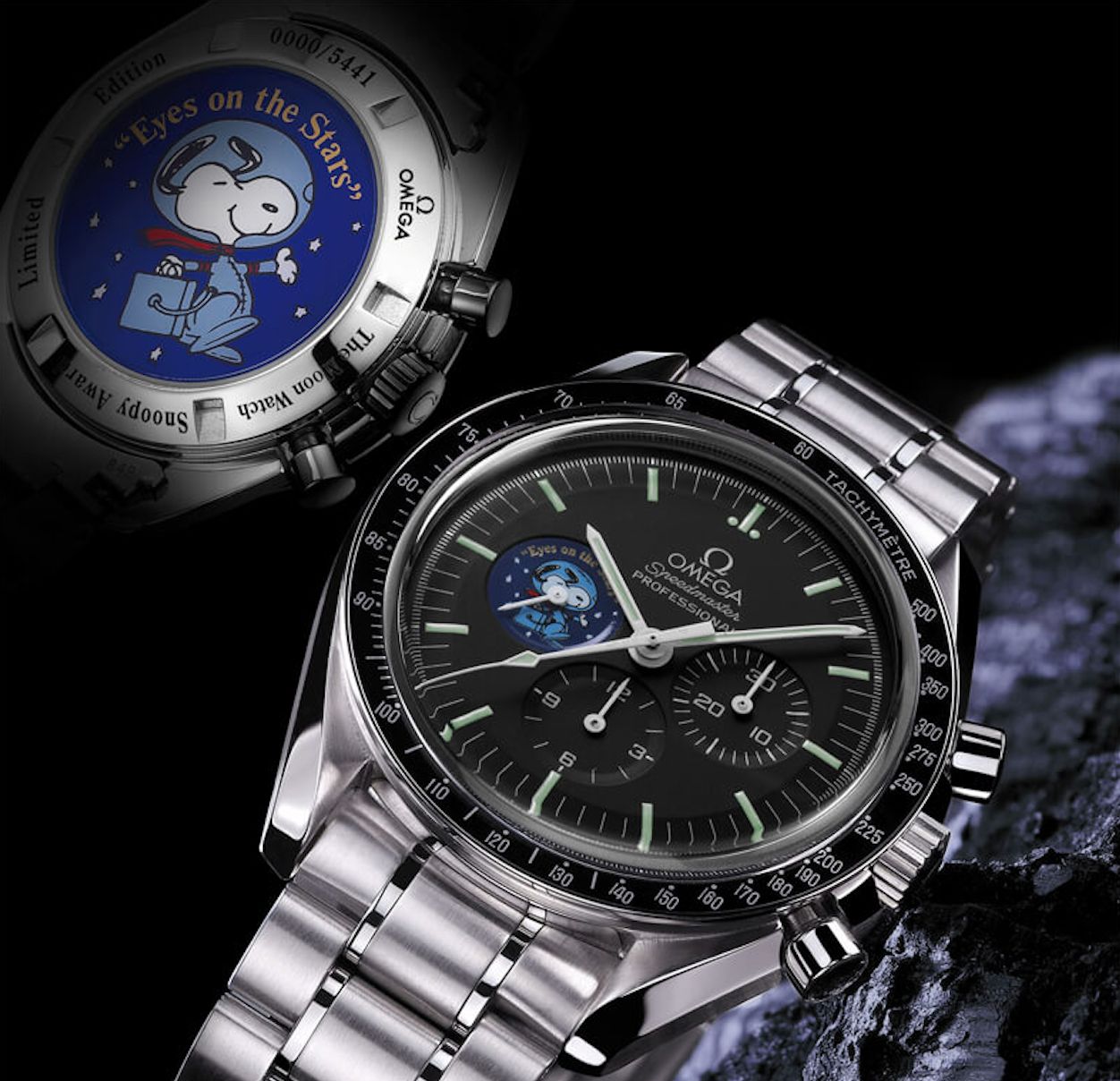 With the exception of its dial and caseback, the 2003 version of the Omega Snoopy Speedmaster resembles a standard-production moonwatch (Image: Omega).

The artwork is reproduced on the case back although, interestingly, there is one apparently unintentional difference. On the front, Snoopy’s helmet has four reflection lines, which are missing on the reverse. It is presumed the badges came from different suppliers back in 2003.

Inside, of course, is the manually-wound Lemania-based Caliber 1861, whose predecessor (the Caliber 861) took over from the legendary Caliber 321 in 1968. Swapping the former’s column wheel-controlled chronograph for a cam-actuated system decreased costs and lent the movement more resilience – making it ideal for service in an astronauts’ timepiece.

While it may have had a fairly plentiful number made for a limited edition, the 2003 Snoopy Speedmaster is one of the rarest commemorative versions. In fact, with the possible exception of the Speedmaster Professional Apollo XIII, the piece brought out in 1995 to honor the 25 years since the near disaster, it is among the most sought after and expensive of the latter-day models on the preowned market. 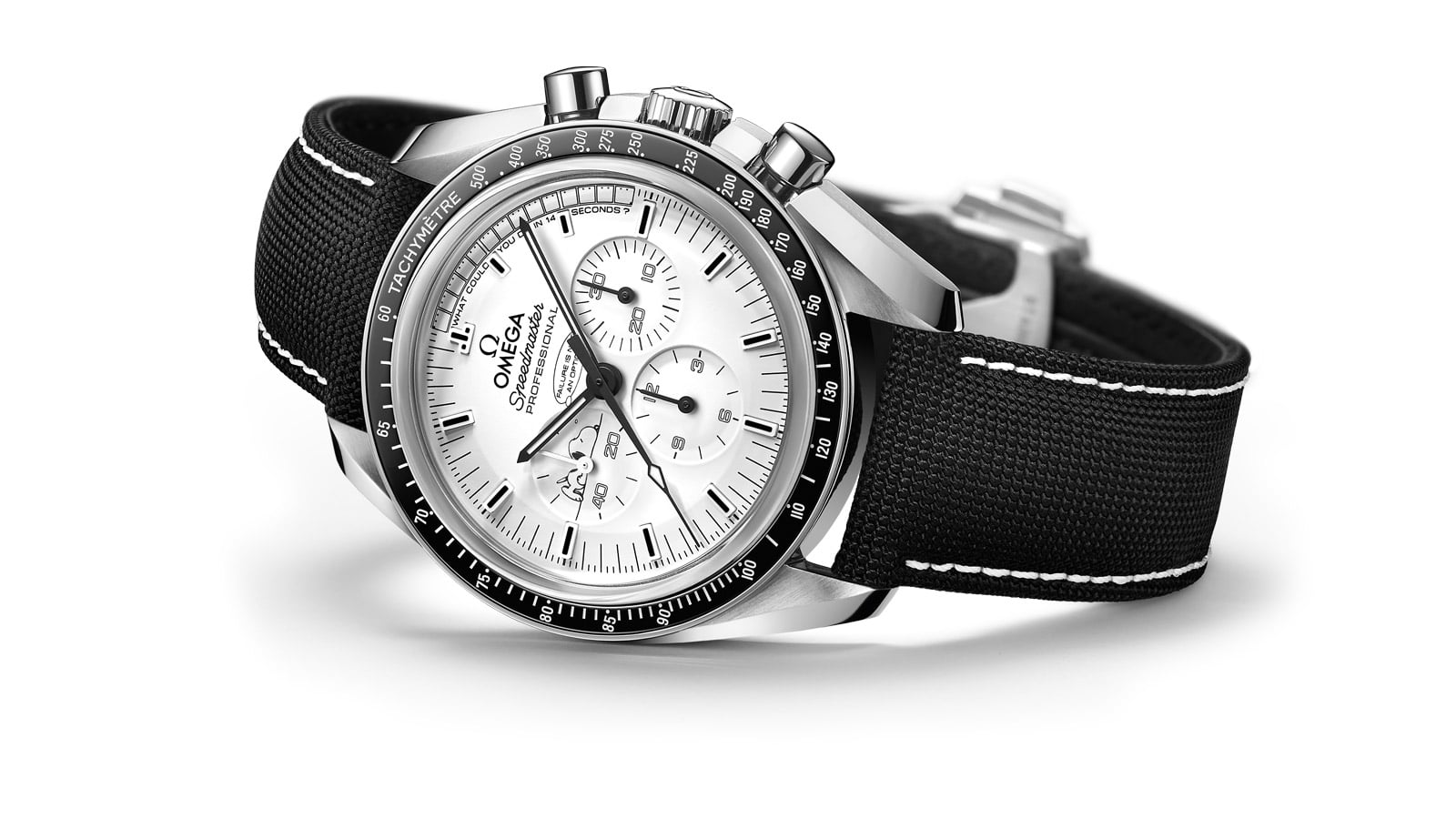 The 2015 version of the Omega Snoopy Speedmaster was released for the 45th anniversary of the Apollo 13 mission (Image: Omega).

The new Snoopy Speedy released in 2015 is, if anything, doing even better as an investment. Here, Omega have included a bunch of design details intended to truly stand out, not the least of which is the white dial. Usually reserved for some very special models, such as their white gold or moonphase pieces, the inverse of the traditional Speedmaster look gives a refreshed take on an all-time classic.

It is also, of course, the perfect monochromatic color scheme for a watch based around Snoopy himself. Here he is again, on the nine o’clock sub-counter, this time in his more customary position, flat-out on his belly as if on top of his kennel. A daydreaming bubble above his head reads ‘Failure is not an option,’ a line attributed to Flight Director, Gene Kranz in the Apollo 13 movie, but apparently never spoken by him in real life. It has become iconic enough of the mission though for Kranz to make the quote the title of his autobiography. 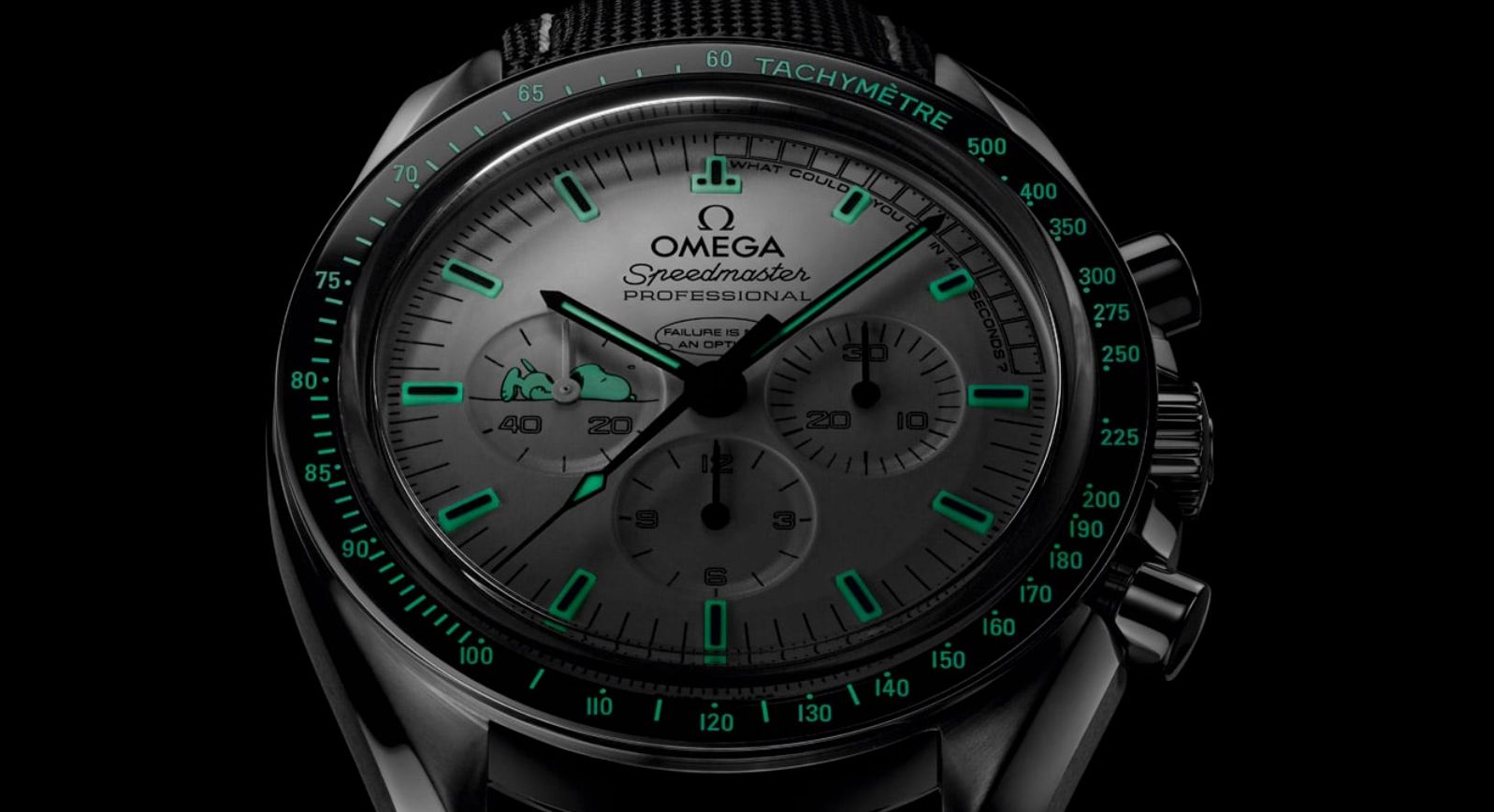 On the 2015 Snoopy Speedmaster, both the bezel markings and the Snoopy cartoon in the 9 o’clock sub-dial have been given a luminous finish (Image: Omega).

Another subtle touch is the line of comic book-like panels that make up the first 14 seconds on the dial, signifying the length of time each controlled burn of the lunar module’s engines lasted as the astronauts desperately attempted to control their trajectory. ‘What Could You Do In 14 Seconds?’ runs the question underneath.

The hands, hour markers and tachymeter scale on the black ceramic bezel are all treated with plenty of SuperLuminova to make sure that the watch stays readable, and Snoopy himself has received the same treatment and also glows brightly in the dark.’

On the back, the same graphic of our canine hero taking a space walk is present, but a little different than on the previous version. Where the 2003 watch got a painted pooch, each of the 1,970 special editions from 2015 is fixed with a hand engraved silver medallion, sitting on a blue enameled base flecked with silver stars. It is a beautiful three-dimensional element, marking each piece out as unique, and is protected behind its own sapphire crystal. The dial, too, is covered with a sapphire crystal, taking over from the retro hesalite acrylic found on the older watch. 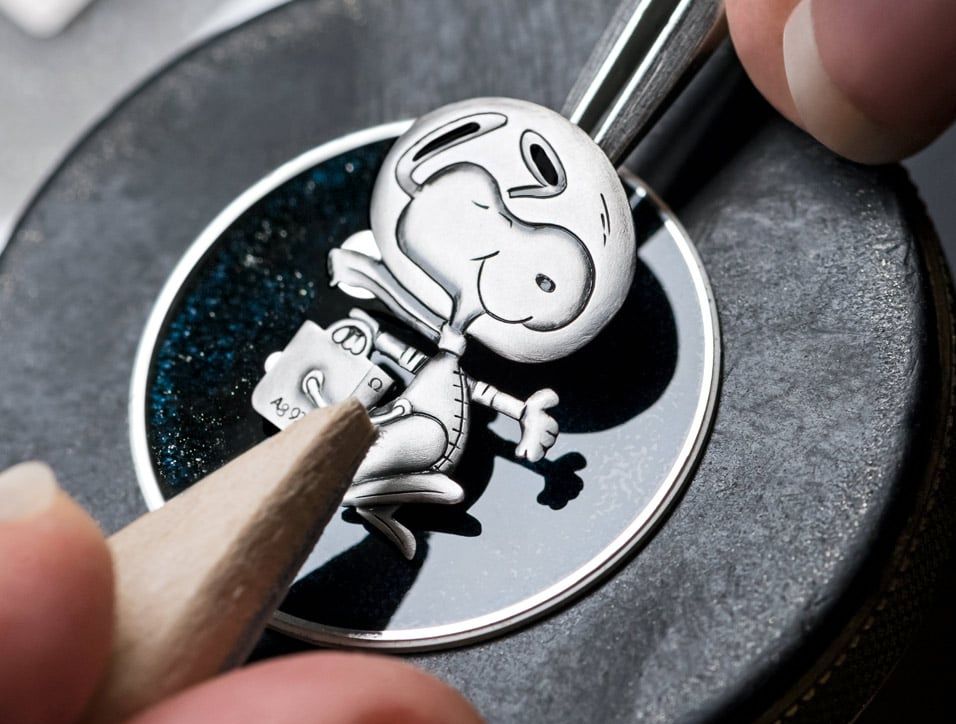 The caseback medallion on the 45th Anniversary Apollo 13 Snoopy Sppedmaster is engraved in sterling silver and mounted on an enamel disc that is decorated to look like the star-filled sky (Image: Omega).

On its release at Baselworld 2015, every one of the Omega Speedmaster Apollo 13 Silver Snoopy Award Limited Editions sold out within the first few hours, at a price of around $6,100. All came fitted with a black nylon fabric strap and were bundled together with a decorative Snoopy pin and dedicated newspaper.

Such has been the popularity of the model, buoyed up by the relatively small production numbers and the fact it celebrates one of NASA’s finest hours, you will be lucky to find a preowned version today for less than $20,000. Proof that if you want a great watch with a fascinating backstory, adorned with a pop culture icon, you can’t expect to pay (wait for it…) Peanuts! 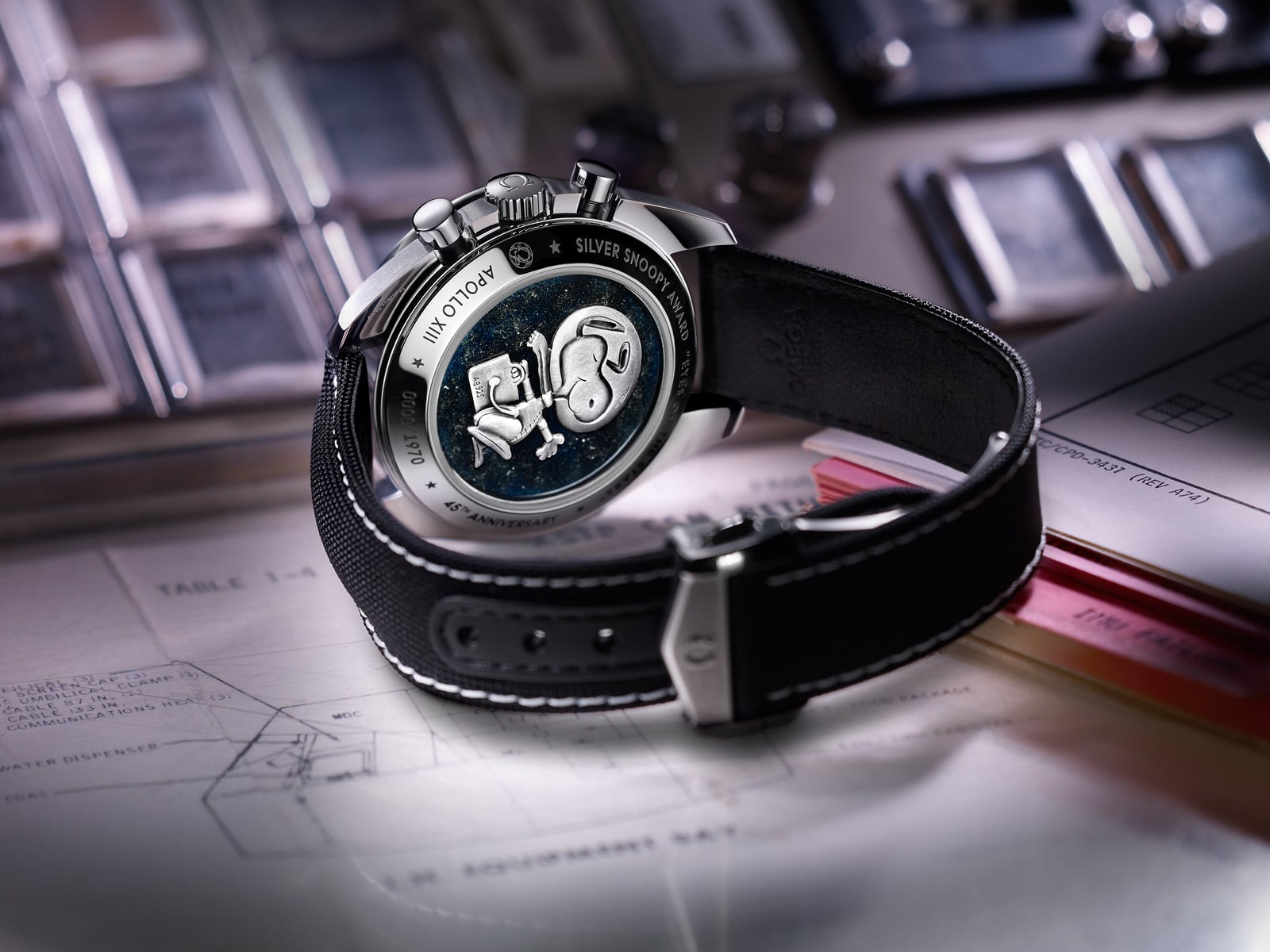