In theory, every Rolex watch outside of the Cellini collection can technically be used for diving. Or more accurately, any modern Rolex model with an Oyster case is more than capable of surviving recreational scuba depths, whether or not it is actually considered to be one of the brand’s legendary dive watches, such as the Rolex Submariner or Sea-Dweller.

The absolute limits for no-decompression diving, i.e. those that don’t require safety stops on the way back up to let the body metabolize some of the nitrogen that has seeped into the bloodstream is between 30m-40m, depending on which training agency’s guidelines you follow. The modern incarnation of the water-tight case that Rolex originally founded in the 1920s – which has formed the backbone of the vast majority of the brand’s output ever since – ensures water-tightness down to 100m for all of the current-production Rolex watches that feature it. With that in mind, 100 meters also happens to be the official depth requirement set out by the ISO 6425 guidelines for what models must be able to reach before they can actually be called a dive watch.

Of course, it would be a brave soul who took their solid gold Rolex Day-Date with them to explore a coral reef, or timed their next underwater excursion using a Sky-Dweller. However, at least in theory, the 100 meters of water resistance offered by either of those models should be capable of surviving the task. Fortunately, we don’t have to do this, as Rolex makes some of the most capable, popular, and downright iconic dive-ready timepieces in the industry, designed from the outset for those very jobs, and the testing process that Rolex puts them through is one of the most rigorous in the entire industry. 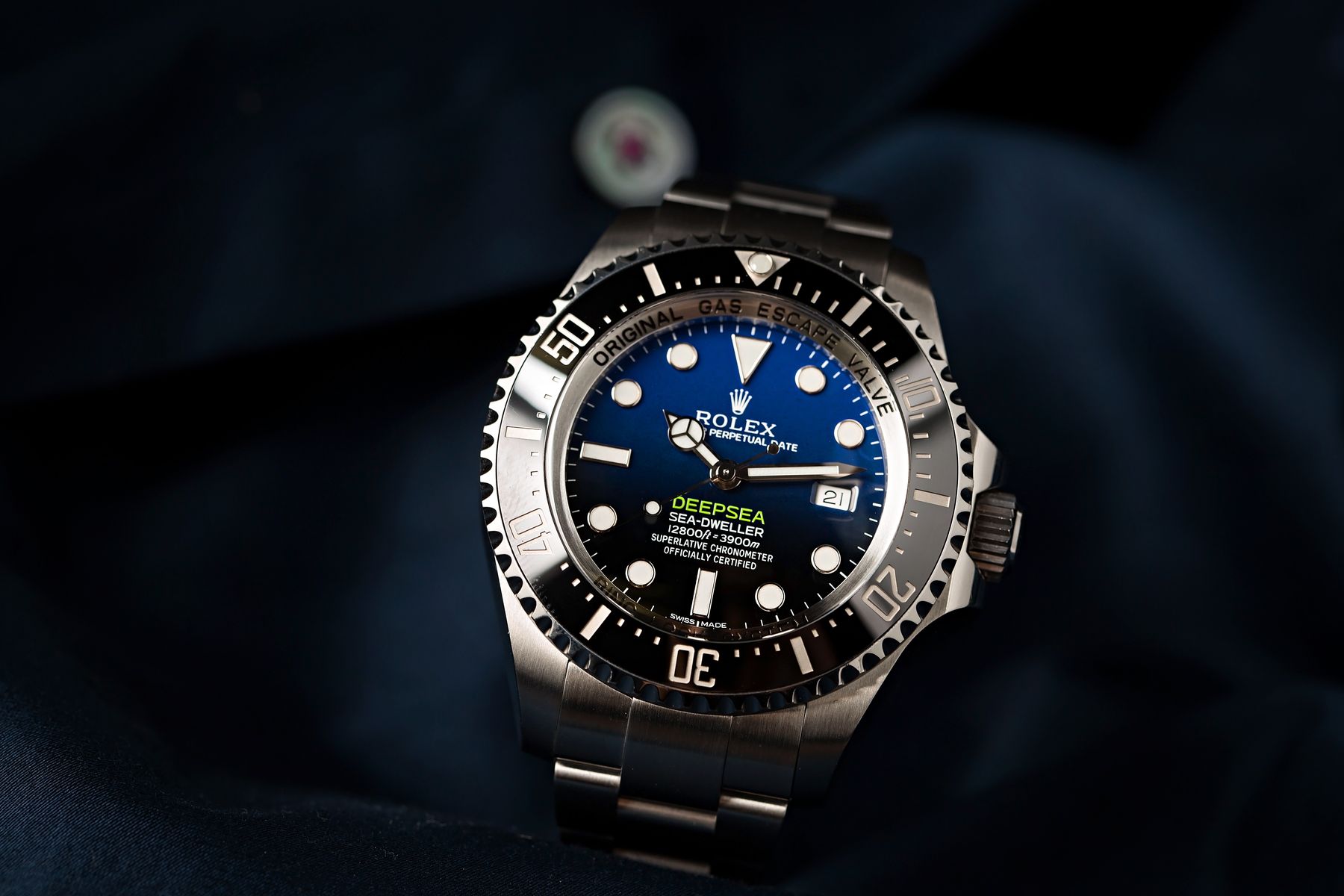 There is a long list of other prerequisites that timepieces must have in order to be classed as dive watches, according to the International Organization of Standardization, who are the ones that outline the various ISO standards, including ISO 6425 that applies to dive watches. Interestingly, vintage examples of the Submariner, without a doubt the most famous diver of them all, don’t meet all the modern conditions.

ISO 6425 which, in fairness, didn’t come into force until 1996, states that a mechanical model must have a unidirectional bezel to measure elapsed time. However, the Blancpain Fifty Fathoms, the piece that beat the first Submariner to the punch by a matter of months in the 1950s as the first purpose-built  ‘modern era’ dive watch, held the patent on that particular innovation until 1983. Regarded as an important safety feature for those who actually use their watches to time dives, having a bezel that only rotates one way means that if it gets knocked, it will only ever display an overestimation of immersion time.

Therefore, all of the various Submariner references made up until the 1980s, along with the initial version of the Sea-Dweller, technically fail to qualify by modern ISO standards simply due to their bezels, and the same would apply to any dive watch that does not have a unidirectional rotating bezel, regardless of its actual water resistance rating. 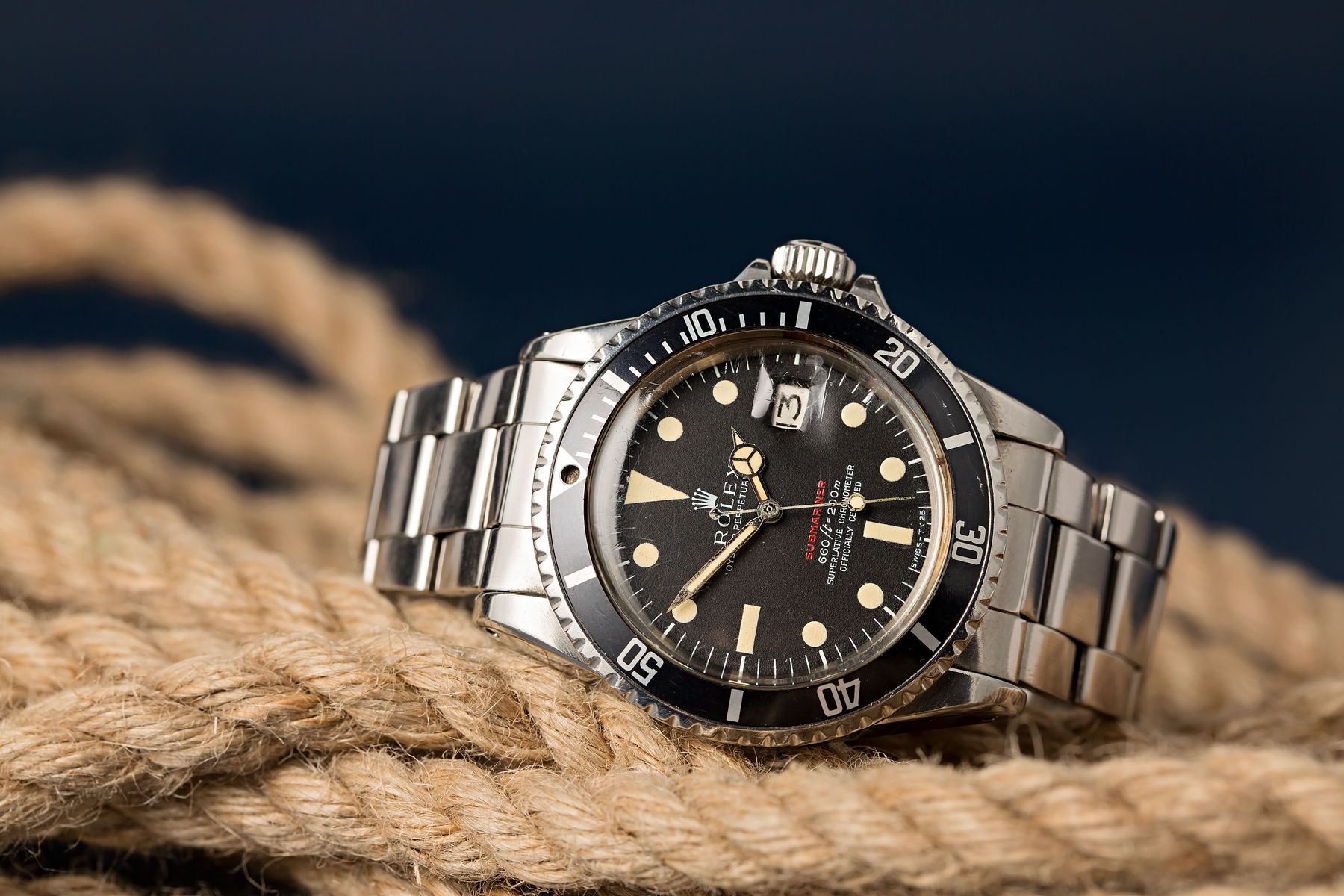 The Technicalities of ISO Certification

Additionally, if we really want to get technical about things, ISO standards have evolved over the years, and none of Rolex’s current-production dive watches actually qualify by the latest version of ISO 6425, with the one lone exception being the no-date Submariner. The most recent update to ISO 6425 occurred in 2018, and it requires that the dials of dive watches have a luminous marking every five minutes. Since the Submariner Date, Sea-Dweller, and even the Deepsea all have a date window at 3 o’clock instead of a luminous marker, they technically fail to qualify for ISO 6425, despite being some of the very best and most capable dive watches in the entire world.

However, if that is one small black mark against some of the most famous dive watches in all of horology, the flat-out capabilities of Rolex’s various purpose-built divers has since made up for it. Rolex’s trio of dive watches, suffer incredible tortures at the hands of the brand’s engineers, all devised to guarantee that they remain at the forefront of what is possible – even though the chances of any of them ever getting to set foot on a dive boat are slim to none.

These days, pretty much none of Rolex’s tool watch collection is used for their original intended purposes. Yet, just as very few Ferrari drivers will ever top out their machines in the real world, it’s nice to know that they can always get you out of trouble if they need to, and they serve as wearable examples of Rolex’s technical prowess of dive watch design that is has developed over the course of more than half a century.

The history of Rolex as a company is inextricably linked to the sea. Whether above the waves or below, the challenges presented by the world’s oceans have forced the company to develop new technologies and pioneer groundbreaking materials. It is an ongoing mission, and what keeps the brand on top is its willingness to push its creations further than any other manufacturer. To that end, the tests that Rolex dreams up for its dive watches are unsurpassed.

Each and every Rolex Oyster model, from the Air-King to the Yacht-Master, is subjected to pressure testing to ensure water resistance. For all of the various models except the divers, that assessment is carried out through a series of multiple tests that ensure the watch is water-resistant to a depth of at least 100 meters, with an extra 10% margin applied during the testing process itself to guarantee that it can achieve its stated depth rating without any issues. 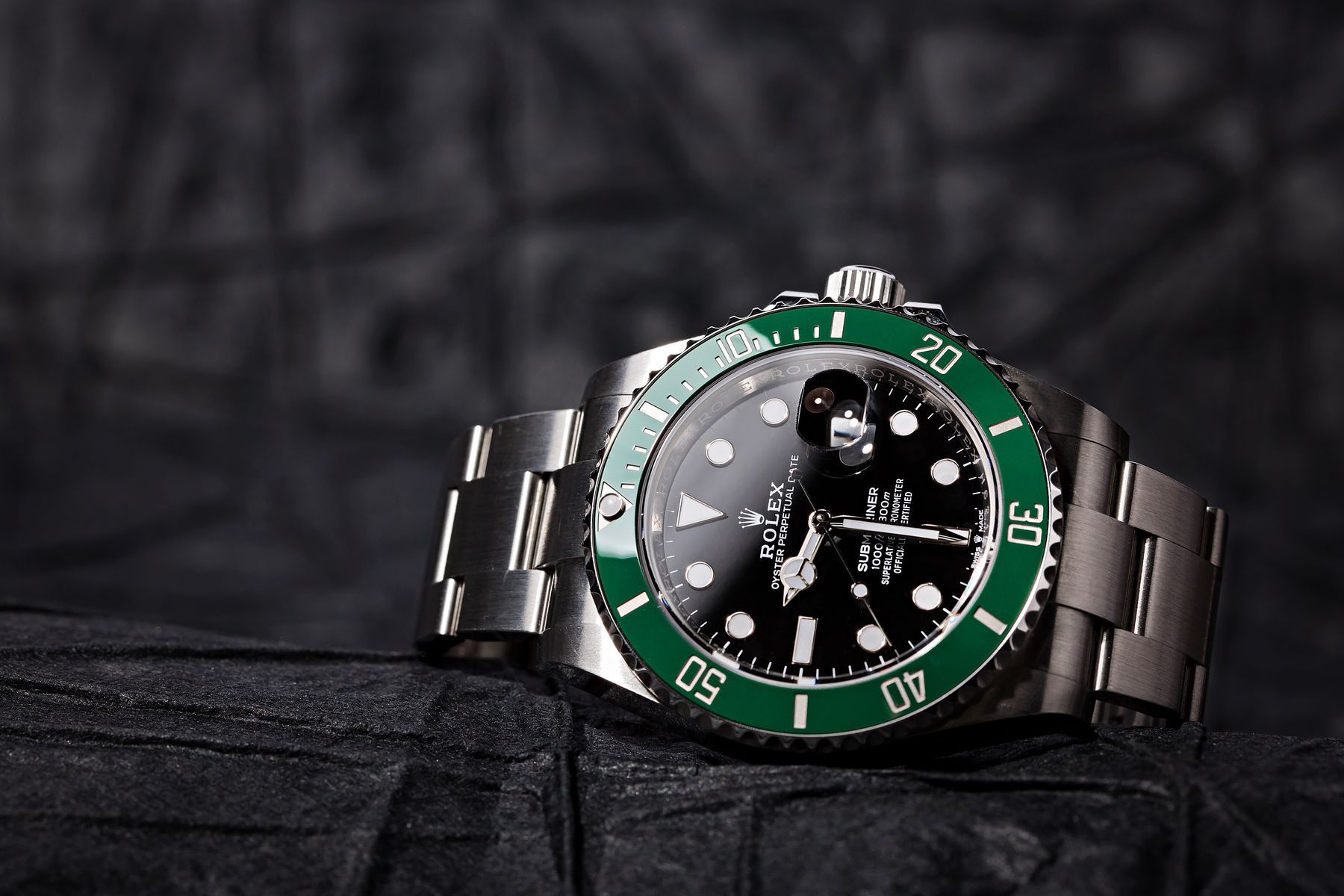 With the dive watch trio, rated waterproof from between 300m and an incredible 3,900m (pretty much two-and-a-half miles under the surface), pressure tests need to be performed slightly differently. Rolex uses a pair of enormous hyperbaric chambers; one for the Sub and the Sea-Dweller, and another very special one for the Deepsea. The second was provided for them by longtime compatriots COMEX, the French saturation diving specialists, and the two companies have enjoyed a long and fruitful relationship ever since they first collaborated while Rolex worked to refine the design of its Sea-Dweller.

To comply with the official ISO regulations for dive watches, each watch has to be able to withstand 125% of its stated depth rating, although it is rumored that Rolex goes far beyond even that. In the case of the Deepsea, just sticking to the bare minimum equates to 4,875m, meaning it has to withstand a colossal pressure of about 7070psi. (Just for reference, the current world record for the deepest scuba dive is around 332m.)

Once the watches are finished with their water baths, they are removed and inspected for any leaks. That is done by heating each one on a metal plate to 100°F before placing a cold rod onto its sapphire crystal. Some condensation is unavoidable due to the moisture in the air, but if it hasn’t dissipated within one minute, the watch is deemed to have failed the condensation test.

The actual numbers are not publicly available (because this is Rolex); however it is said that fewer than one in every 1,000 watches actually make it to this late stage of production and fail this test at the Rolex factory. Any identified with a leak are given a run through a vacuum chamber to see where the faults are before getting corrected and then put back through the testing process once again. 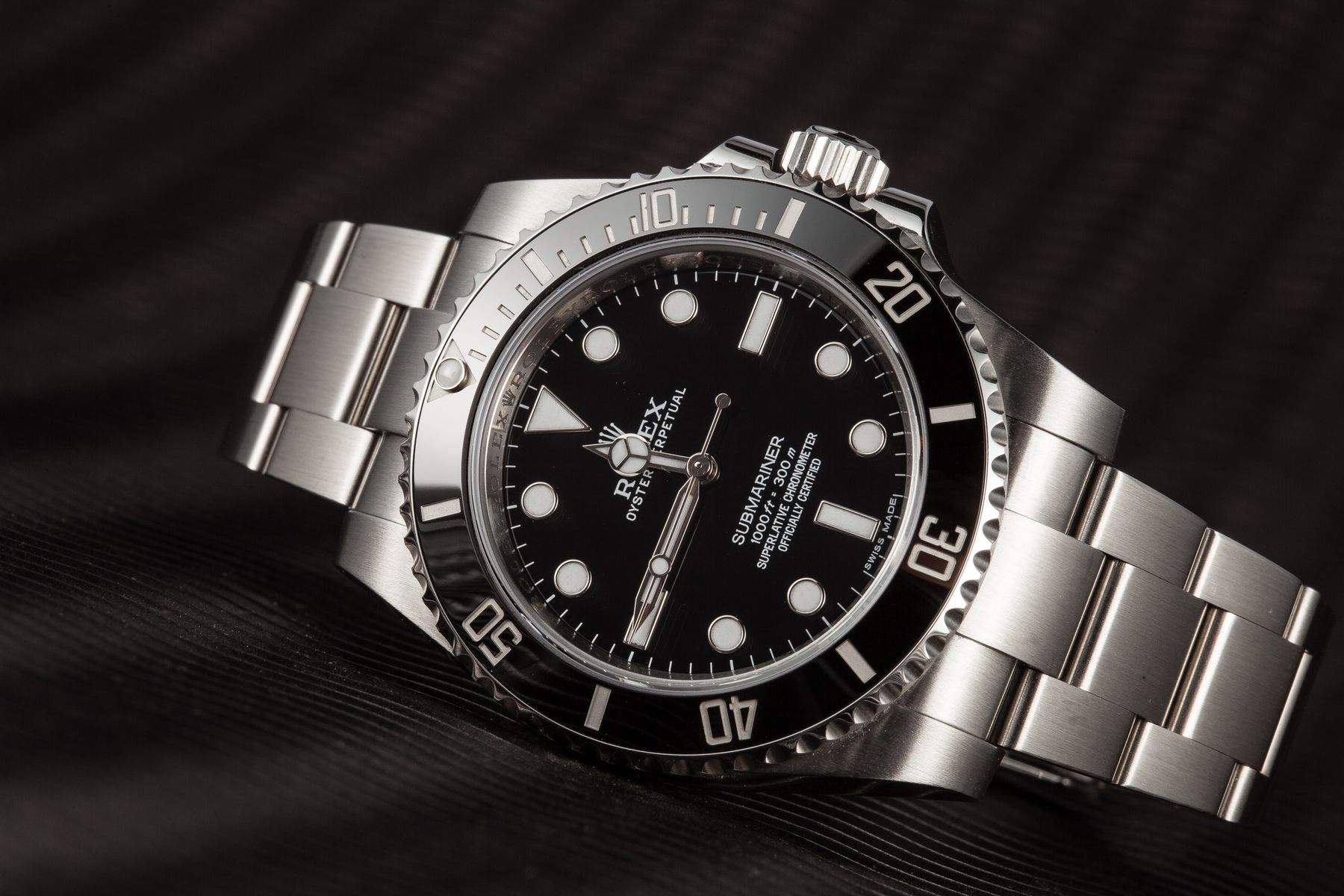 The Other Tests for Rolex Watches

It is worth noting that for ISO certification, every single watch that Rolex makes, not just a sample from each batch, has to be tested, and the grueling trials above are only one part of an especially malicious sequence. As well as being proved water resistant, the accuracy of the movements is also checked after a series of artificially created scenarios meant to represent what the watch could be subjected to on a dive excursion.

That process includes a series of shock resistance tests, ensuring each model is strong enough to survive the sort of battering which is part and parcel of life aboard a dive boat. The most challenging involves the front and left side of the case receiving a blow from a 3kg hammer that has an impact velocity of 4.43m/s.

And to simulate a dive in tropical conditions, where the air temperature can be many degrees warmer than the water at depth, a thermal shock assessment sees the watch submerged up to 30cm and heated to 40°C, cooled down to 5°C, then taken back up to 40°C for five minutes at a time, with each transition taking no longer than one minute. To pass these tests, the movement must retain timekeeping accuracy to within +/- 60 seconds a day. 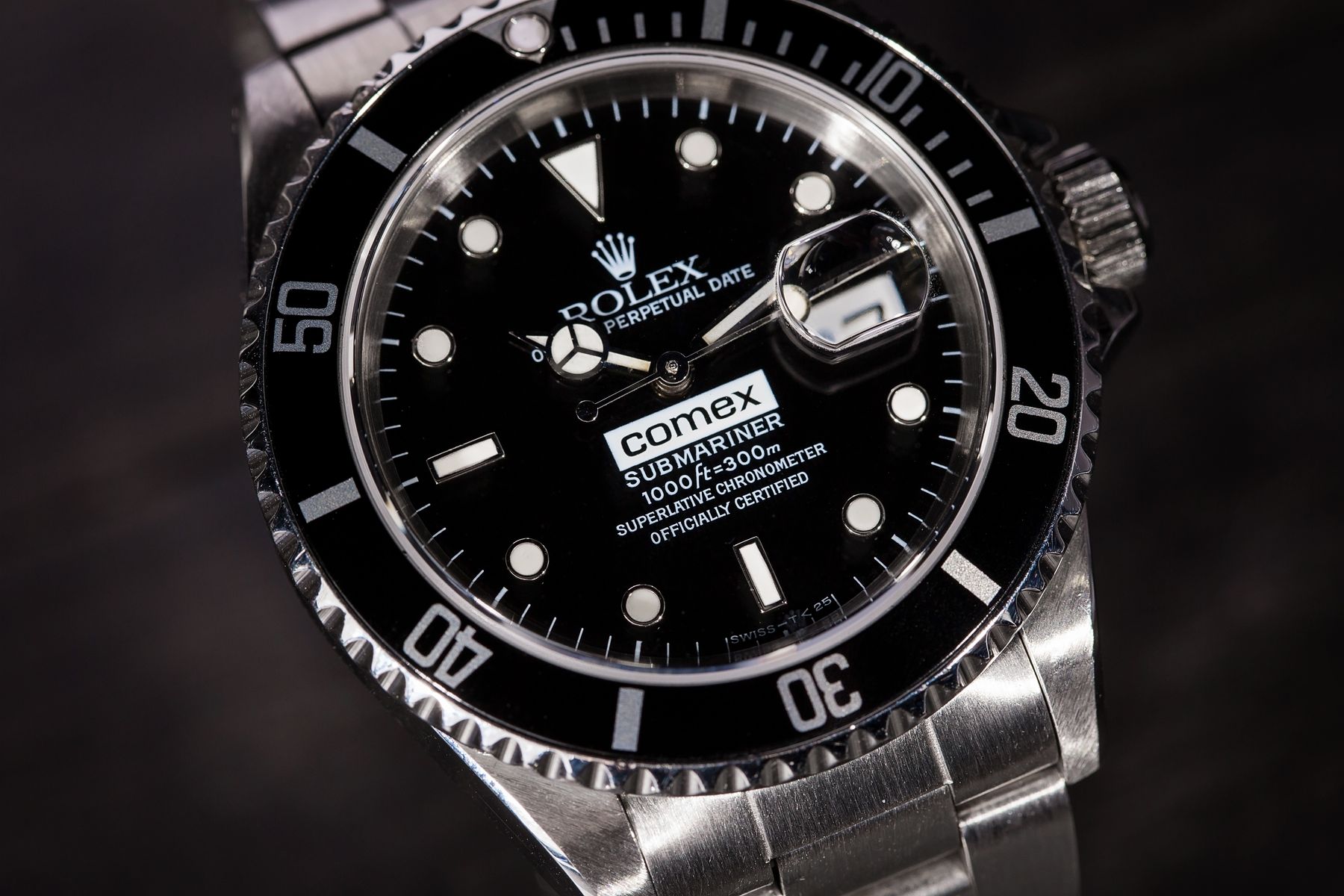 The Rolex Sea-Dweller and the Deepsea are both intended for use in the world of professional saturation diving. Here, crews are required to work at incredible depths for long periods of time – something that they can only do by breathing a carefully controlled mixture of different gasses. Specifically, helium is used to replace nitrogen in the divers’ breathing mixtures, and since helium is inert, this negates the narcotic effects of nitrogen when it is put under extreme pressure in traditional compressed air mixtures.

COMEX was the leader of this type of work in the 1960s, and the problem which soon became apparent (and the reason for the Sea-Dweller’s existence) was the tiny helium molecules seeping inside the cases of their diver’s watches. Upon ascent back to the surface, those molecules would expand too quickly, creating a pressure inside the watch and forcing the crystals to pop clean out of their cases.

Rolex and COMEX co-developed the HEV, or Helium Escape Valve – a small, one-way regulator set in the side of the case which allows the trapped gas molecules to leak out safely and preserve the integrity of the watch case. Consequently, these valves also have to be thoroughly tested before certification can be given. 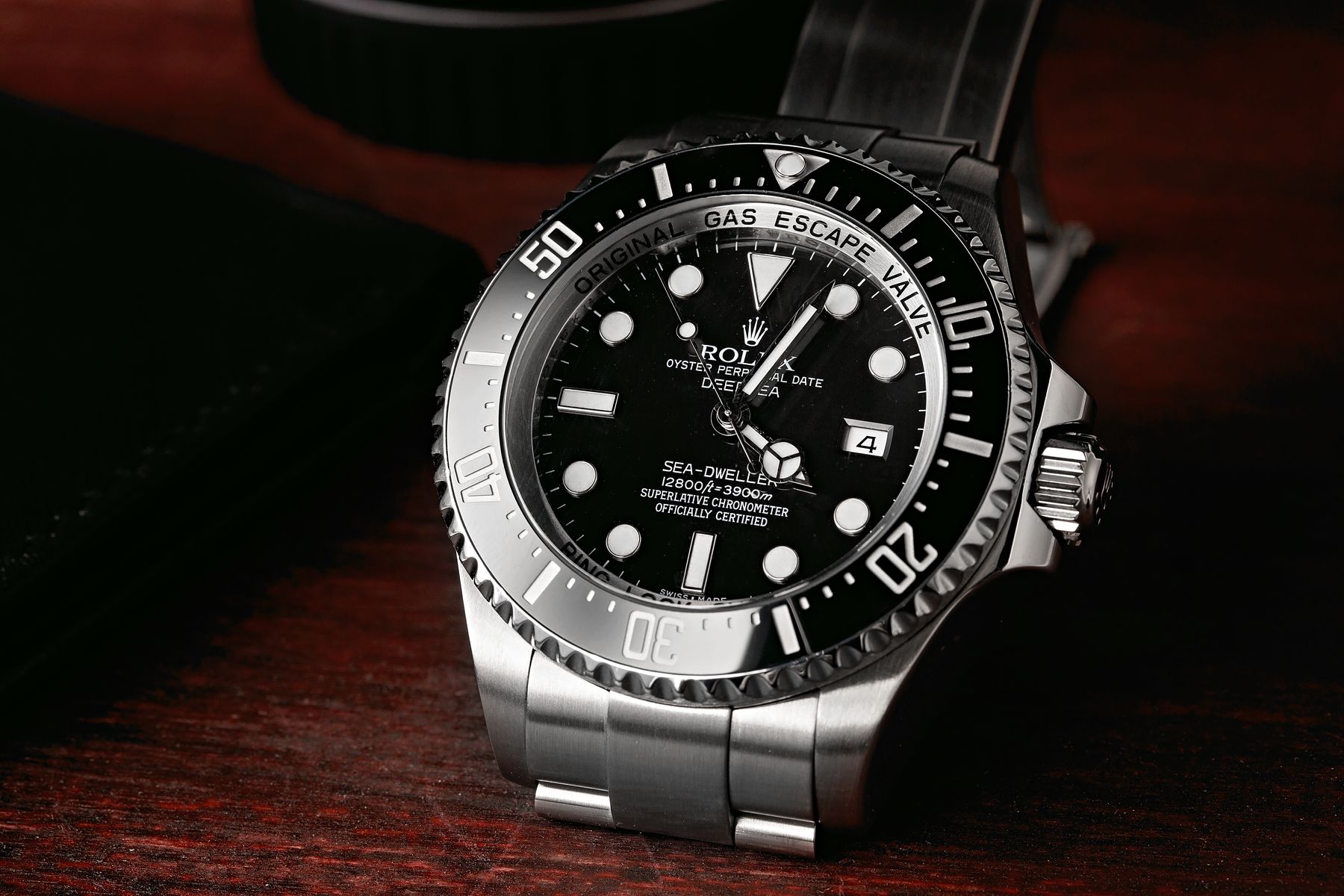 The watches are kept in a helium-rich gas mixture, again at 125% capacity, for 15 days before being brought back to ambient pressure in just three minutes – an extraordinarily demanding trial, and one no actual diver could ever survive. Any piece that can survive this is more than capable of even the most severe real life challenges.

It has been a good few years since mechanical dive watches have been standard issue equipment for those who make their living working underwater. At most, and particularly those made by a luxury manufacturer like Rolex, they are now more likely to be just a backup to a dive computer. The Submariner has long been more a status symbol than a tool, and with the recent release of the first Rolesor Sea-Dweller in stainless steel and 18k yellow gold, the middle child of Rolex’s dive watch family seems to be headed down the same path.

However, whether or not these legendary names will ever actually taste the life aquatic, they remain some of the most rigorously inspected and highly accomplished examples of dive watches in the entire industry. 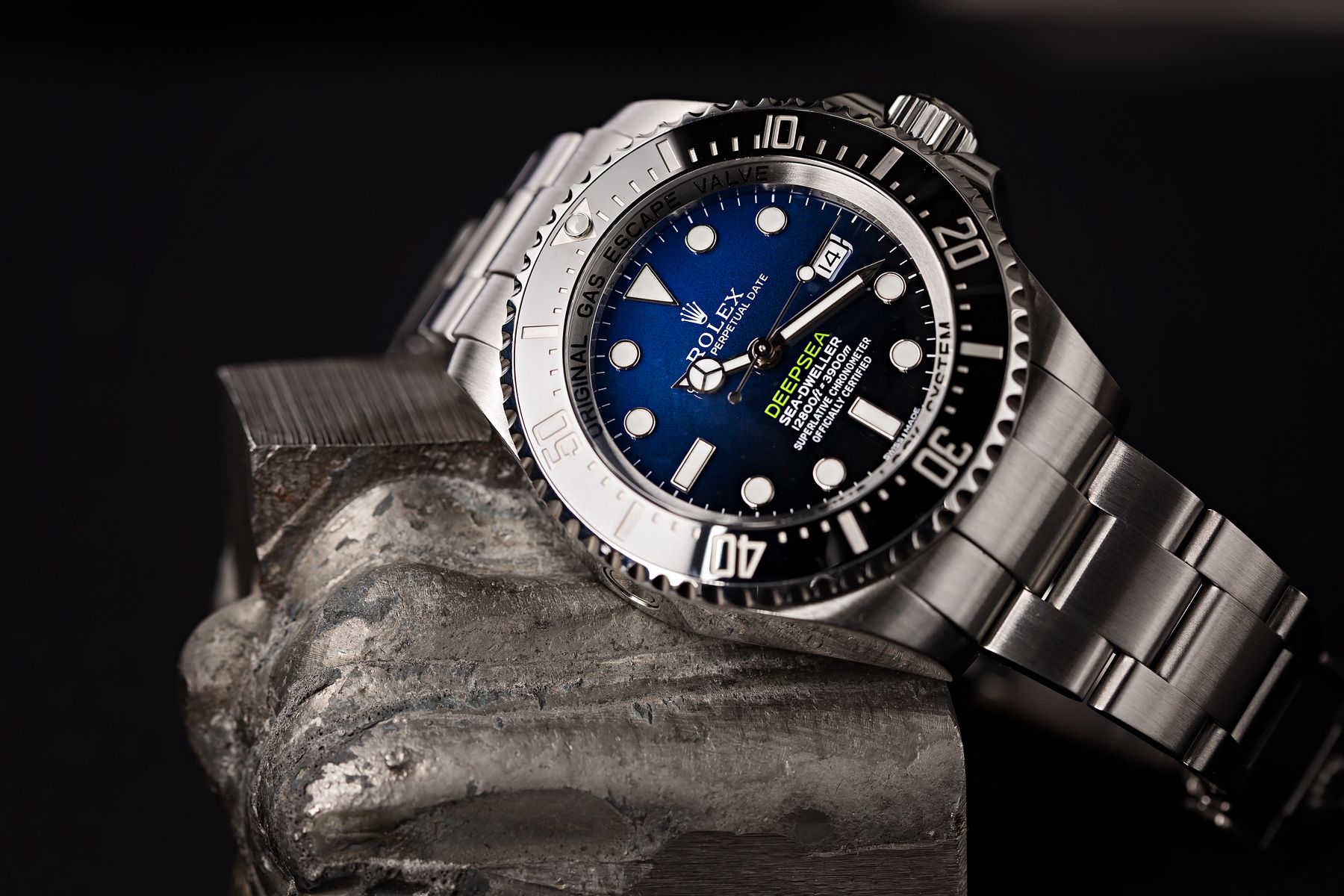