It has been said repeatedly that there are only a handful of sport chronographs in the upper echelon of watchmaking that are capable of doing double duty as a both dressy and casual counterpart. The Nautilus and Aquanaut chronographs top that list, flanked by the Royal Oak of course, and given the growing demand and continually rising prices of the steel Rolex Daytona, it also earns a spot in the category. That said, the Vacheron Constantin Overseas Chronograph has always been a bit of an underdog, which is a real shame. Its design and execution from dial to buckle are exceptional, its aesthetics unique and thoughtful; yet somehow it never developed the same clout as the others against which it competes. 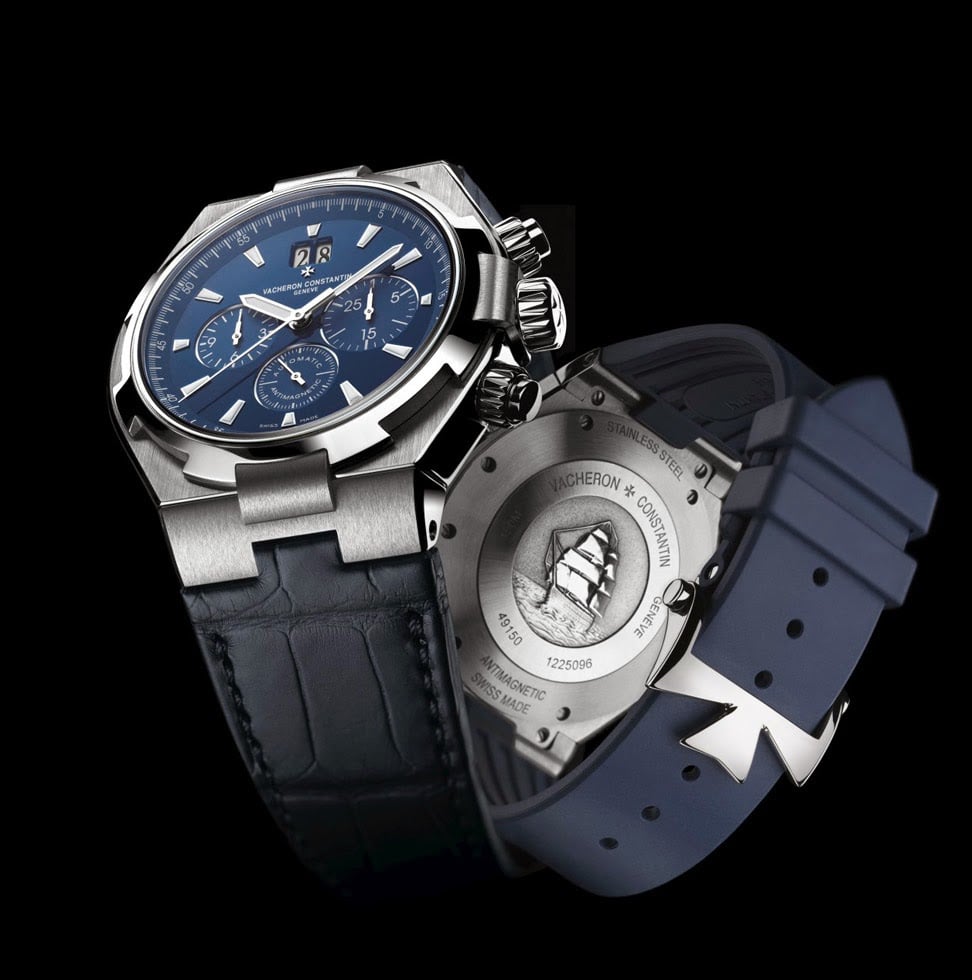 Despite being made by a member of the “Holy Trinity” of watchmaking, the Overseas Chronograph does not receive as much attention as it deserves (Image: Vacheron Constantin).

The Overseas Chronograph: A Relative Bargain

For those with value in mind, who prefer to own a well-made watch that’s less likely to be spotted out in the wild, you’re in luck, as pre-owned examples of the Overseas – especially the previous reference 49150 that launched in 2004 – seem to be selling in the $10-$13k range. By comparison, the non-Offshore Royal Oak Chronographs will set you back $18k, and we won’t even get into how (or why) Nautilus Chronographs can’t be had under $75k these days. That tale is for another occasion. 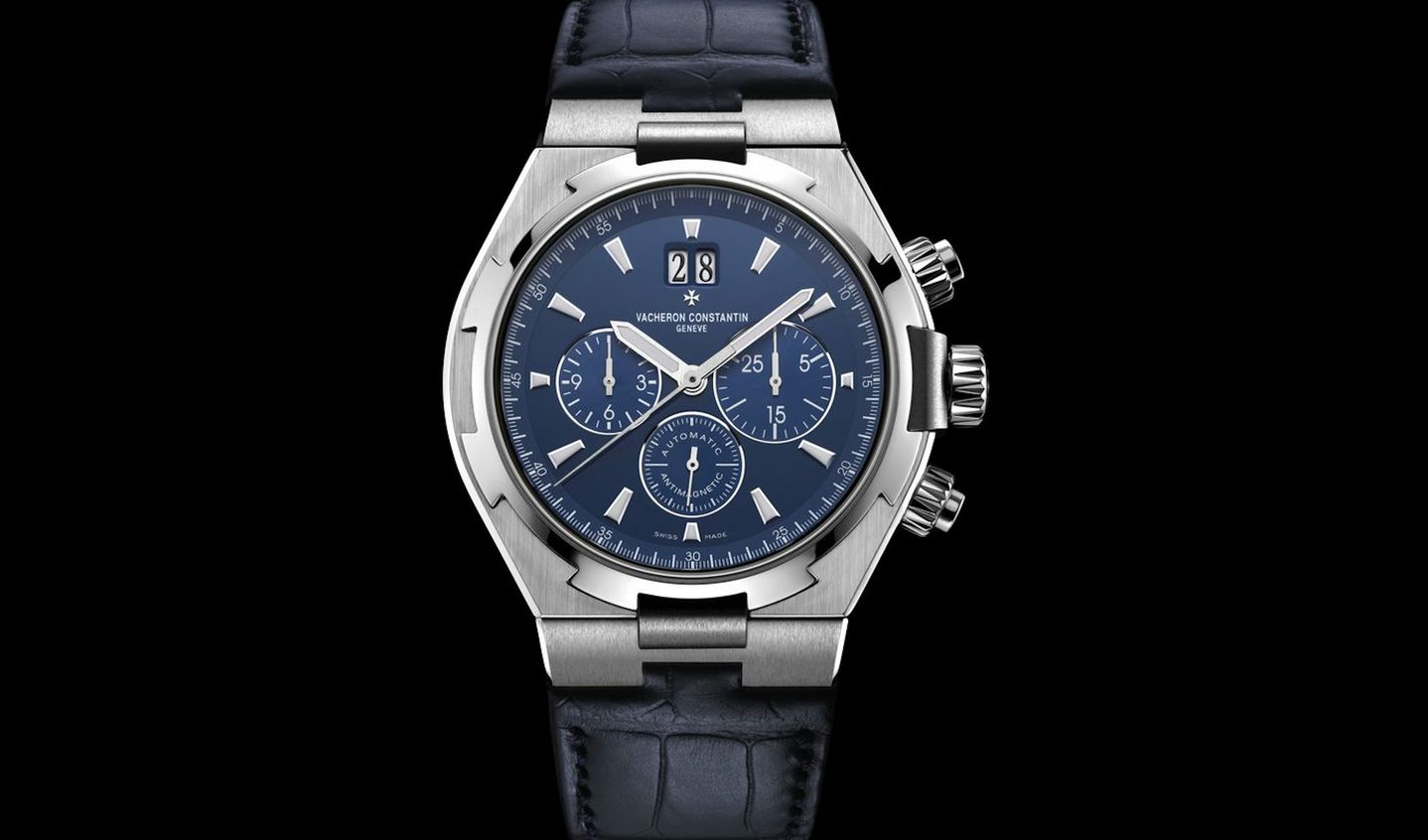 In addition to its integrated bracelet, both rubber and leather straps are also offered as options for the Overseas Chronograph (Image: Vacheron Constantin).

So what makes the Overseas Chrono so special? Before we get to its innards, there’s quite a lot to appreciate visually. Its unique notched bezel design speaks to its predecessor, the 222 that launched back in 1977 as a celebration of the brand’s 222nd anniversary. The polishing of its bezel is nicely complemented by the knurling and polishing on its screw-down crown and screw down pushers, which are all in contrast to the brushed finish of the forward facing surfaces of its case and bracelet.

Speaking of its bracelet – to this day, the Overseas bracelet is one of my favorites out there. Its links are shaped like half of the Maltese cross (which is Vacheron’s brand logo), and use pronounced bevels to create dramatic reflective angles on what would otherwise be a reversed deviation of the Rolex Oyster bracelet. In the latest version, a micro adjustment is fitted into its clasp, though this isn’t the case with the ref. 49150. It’s generally agreed across the board that the integrated bracelet on the Overseas Chronograph is one of the more comfortable out there. 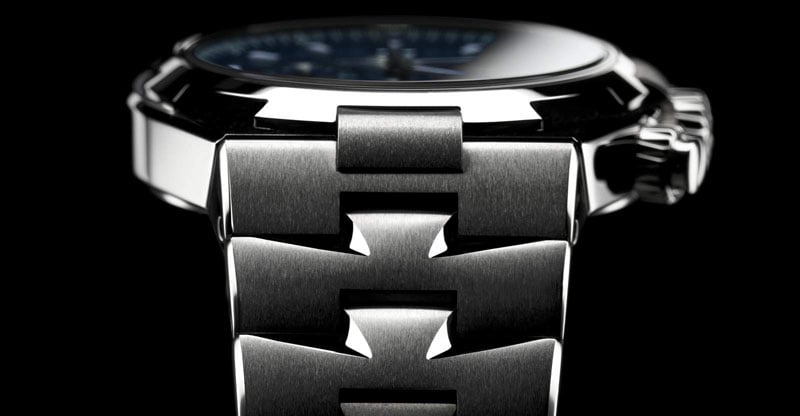 The dial of the ref. 49150 is another talking point that gives the watch further appeal. Unlike the Royal Oak’s “Tapisserie” pattern, the geometric guillochage on the dial of the Overseas Chronograph is more subtle and traditional in nature. Looking closely at the three dimensional texture, the pattern-work isn’t far off of the more traditional, “clou de paris” guilloche pattern, though more elaborate in execution.

Its sub-dials are recessed below this textured surface layer, and are not equal in size. At first this detail threw me. Considering the symmetry created by the use of a big date at 12 o’clock, I couldn’t quite wrap my head around why Vacheron’s designers would do this (I still don’t have an answer to that), but over time this detail has come to bother me less and less. 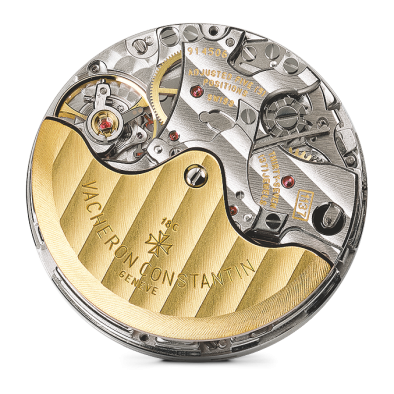 The Caliber 1137 that beats away inside the Overseas Chronograph was created specifically for, and used solely in the model in question. It is based on a movement from Frédéric Piguet, specifically the 1185, which oddly enough is also the base of the Audemars Piguet caliber AP 2385, found in the Royal Oak chronograph with which this watch directly competes.

In Vacheron’s execution, we see the addition of a large double-disc date indication flanking the sub-dials for running seconds, chronograph minutes, and chronograph hours. The movement is good for a 40-hour power reserve, which isn’t massive, but is still at least competitive with most others in the segment from this period. Sadly, in this iteration, the caliber is hidden behind a solid caseback, unlike the latest Overseas which switched to a display back. 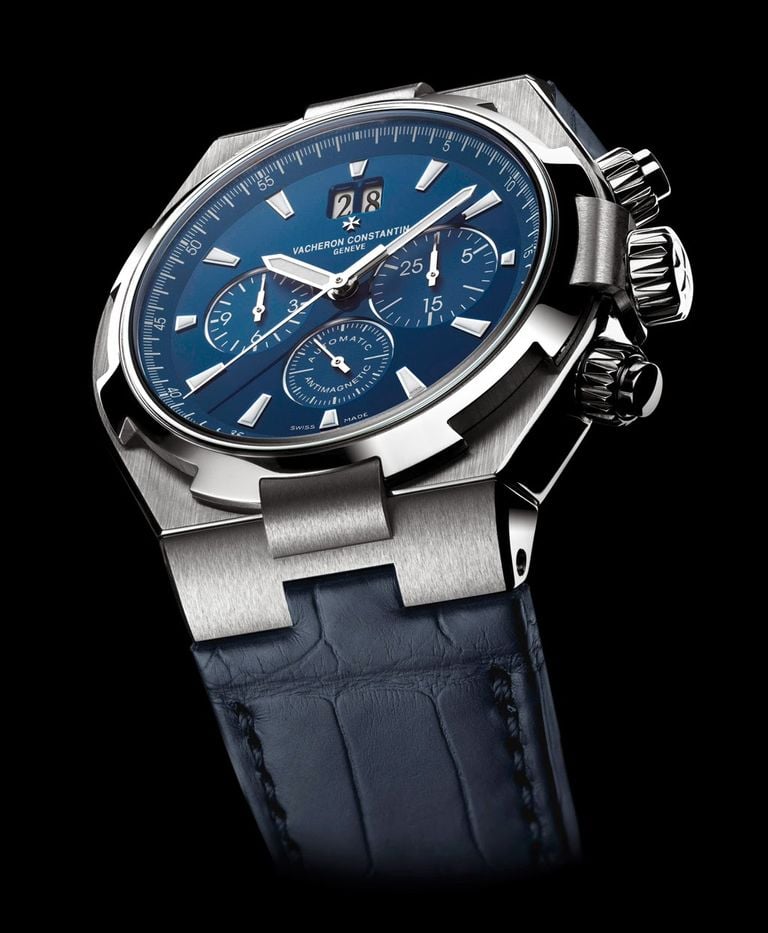 Initially launched in 2004, the reference 49150 sells for a fraction of the price of similar offerings from Audemars Piguet and Patek Philippe (Image: Vacheron Constantin).

Through its production run this version of the Overseas appeared in a handful of dial variations including white, black, slate grey, and a bizarre silver version with darker sub-dials and red chronograph hands. Personally, I always lean towards the black and white variants, as they are the only ones that have this kind of guilloche dial; however the blue and slate models also have a certain level of appeal.

Adding to its overall versatility, rubber and leather straps were also offered with the Overseas. In an ideal world, you’d want to track down a piece that is for sale with all three, though more realistically picking up a watch fitted with the bracelet and then acquiring the straps from HQ would be the way to go. With its 150m water resistance, an Overseas Chrono on rubber strap is the perfect go-anywhere travel watch, and unlike an AP or Patek, it’s less obvious to random passersby, should you be traveling in less-secure areas/conditions.

At the end of the day, the aesthetics of the Overseas will either sing to you or turn you off to the piece entirely. However, should the situation turn out as the former, I’d absolutely encourage taking a look at one. It’s a great value considering its complex execution, and it easily keeps up with its more notorious (and expensive) competition.