The 78th Golden Globe Awards took place last night, honoring the very best in American television and film in 2020, along with early 2021. As one would expect from one of Hollywood’s annual premier awards shows, a number of fantastic Omega watches were present at the digital event and worn by the nominees and winners. 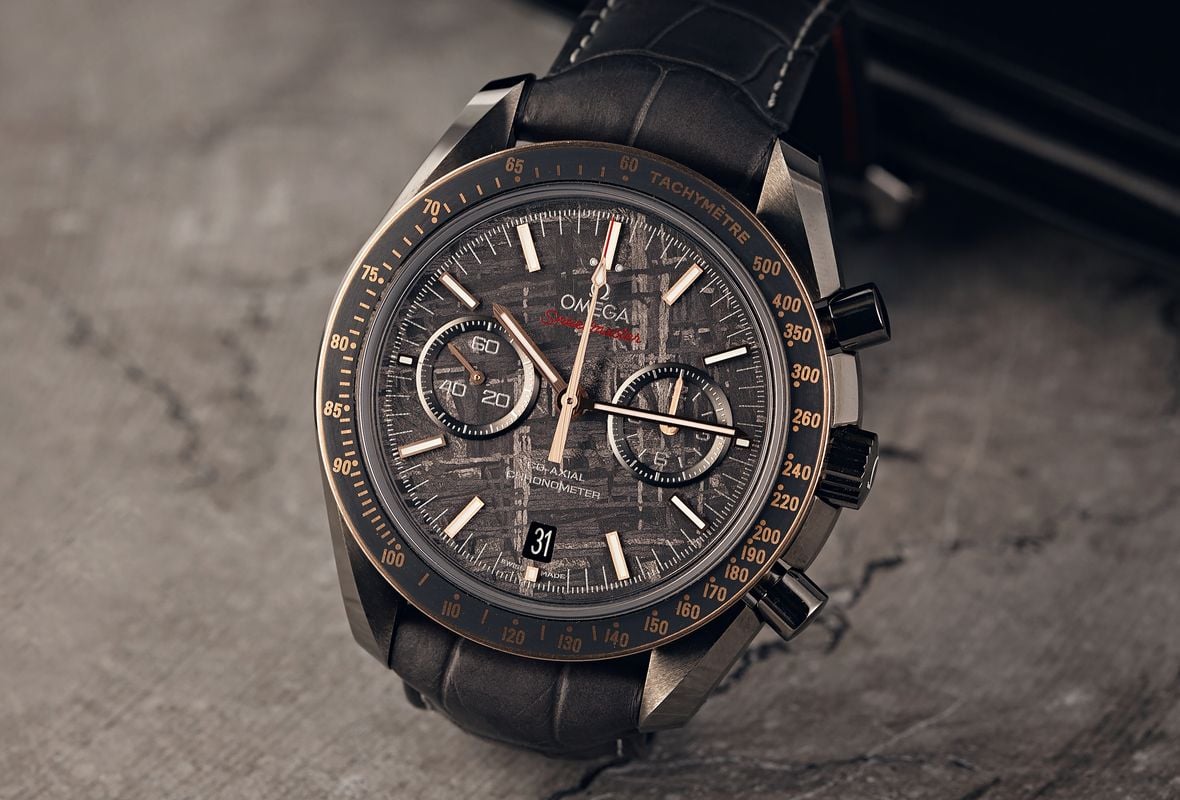 Omega Watches at the Golden Globes

Notable wearers of Omega watches from the 78th Golden Globe Award Show were Nicole Kidman (nominee for Best Performance by an Actress, Limited Series, Anthology Series or a Motion Picture Made for Television), Sacha Baron Cohen (triple nominee and winner of both Best Actor in a Motion Picture – Musical or Comedy and Best Picture – Musical or Comedy), and Eugene Levy (nominee for Best Performance and winner of Best Television Series).

Click here for our Ultimate Buying Guide on Omega Watches: 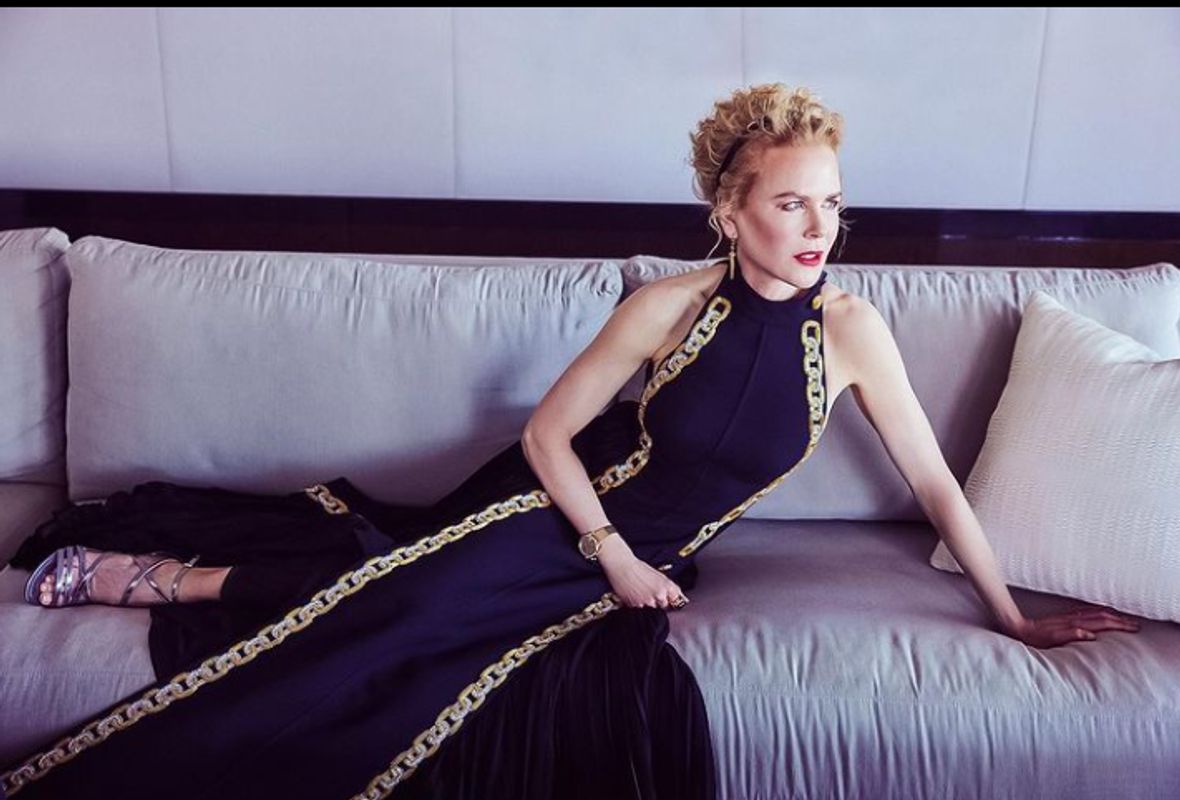 Five-time Golden Globe winner and Omega brand ambassador Nicole Kidman was naturally wearing a timepiece from the historic Swiss watch manufacturer for the 78th annual Golden Globe Award ceremony. Nominated for Best Performance by an Actress, Limited Series, Anthology Series or a Motion Picture Made for Television for her role in The Undoing, Kidman could be spotted wearing the Omega Trésor in Moonshine Gold. 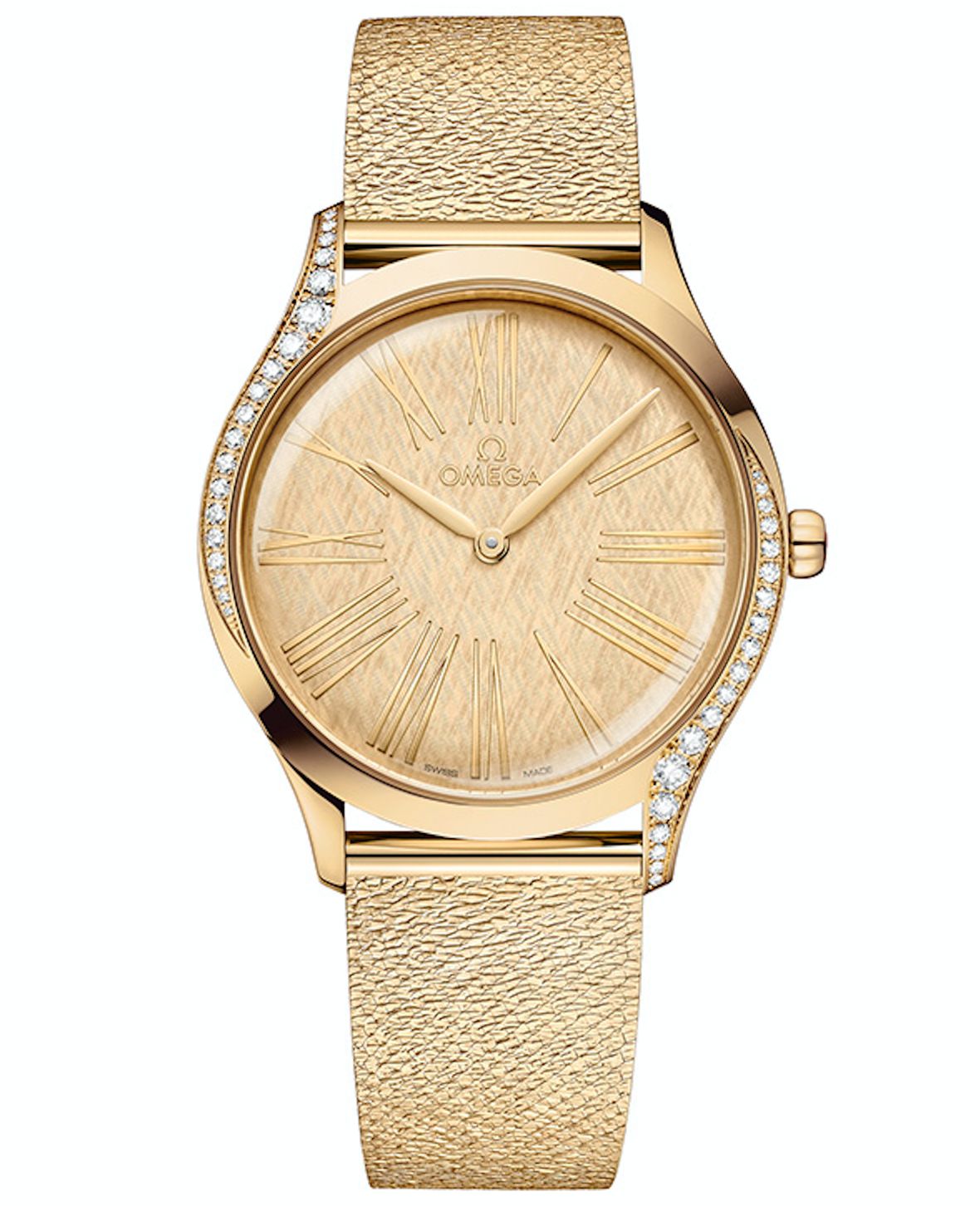 Featuring a slim 36mm case crafted from the brand’s proprietary 18k Moonshine gold and set with 38 full-cut diamonds curved elegantly along each side, Nicole Kidman’s watch includes a dial (also in 18k Moonshine gold) that showcases a silk-like pattern with diamond-polished hands and Roman numeral hour markers. Powering the watch is the Omega Caliber 4061 quartz movement, which resides behind a polished mirror caseback embellished with the brand’s “Her Time” pattern.

Continuing with the aesthetic established by the case and dial, the watch includes a matching Moonshine gold mesh bracelet with a silk-like pattern and a special foldover clasp. Completing the watch is a winding crown that features a single diamond that is surrounded by a red liquid ceramic flower that is made from five interlocking Omega logos. 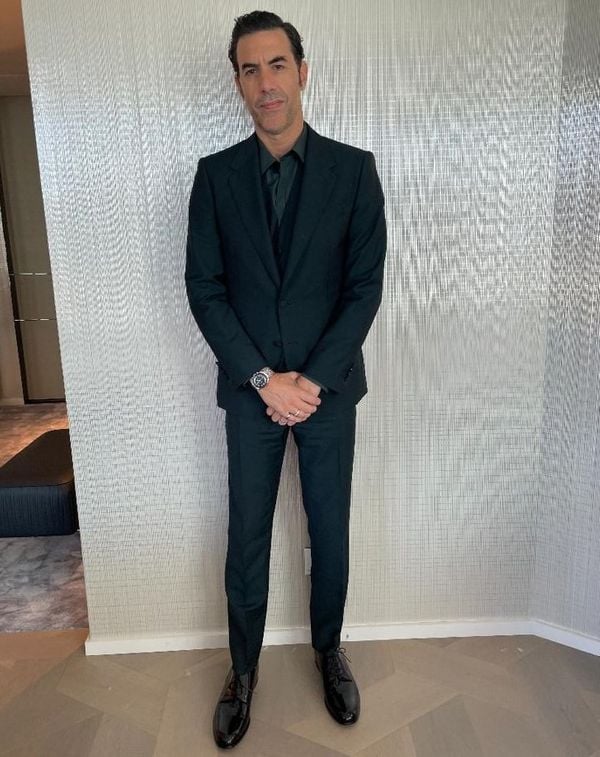 Nominated for three Golden Globes and winning both Best Actor in a Motion Picture – Musical or Comedy and the award for Best Picture – Musical or Comedy for his film Borat Subsequent Moviefilm, Sacha Baron Cohen was spotted at the 78th Golden Globes wearing the new Omega Speedmaster Moonwatch Master Chronometer that was just released earlier this year in January 2021. 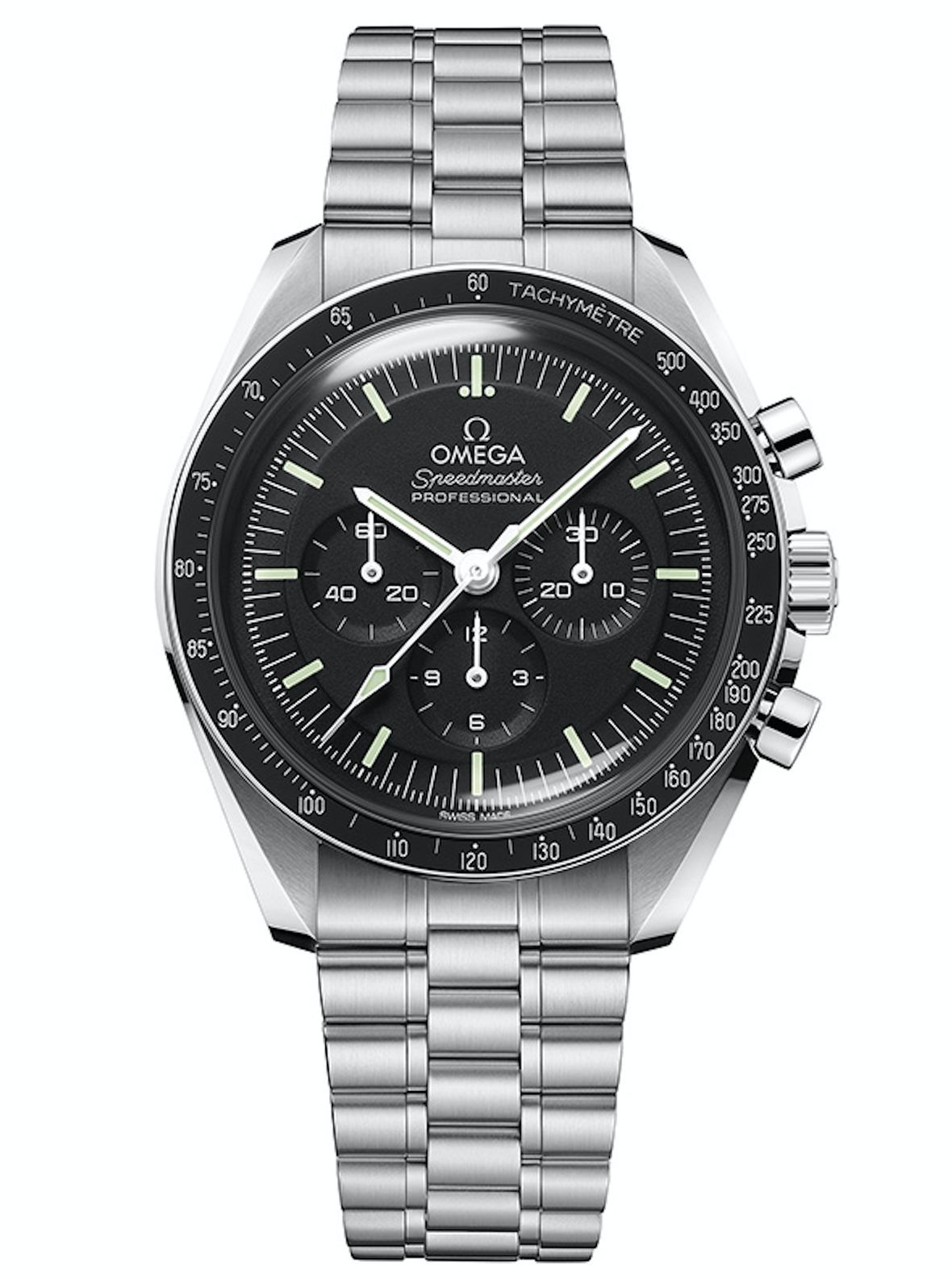 While Omega produces two versions of the new generation of the iconic Speedmaster Moonwatch, Sacha Baron Cohen’s watch appears to be the classic model that features the traditional Hesalite crystal and solid steel caseback fitted to its 42mm stainless steel case. Fitted to the watch is the updated and redesigned five arched-link bracelet that includes fully-brushed surfaces that separate it from the version fitted with a sapphire crystal and display caseback.

Taking its design cues from the 4th generation Speedmaster style worn on the moon, complete with a black step dial and famous dot over 90 on the anodized aluminum bezel insert, the overall aesthetic of the watch is very much in line with the classic Speedmaster Professional and it is instantly recognizable as an Omega Moonwatch. With that in mind, the most significant update to accompany this new generation of Speedmaster watches in the brand’s Caliber 3861 movement, which features a Co-Axial escapement and Master Chronometer certification, bringing the iconic Moonwatch’s performance straight into the modern era.

Omega Speedmaster Grey Side of the Moon “Meteorite” – Eugene Levy 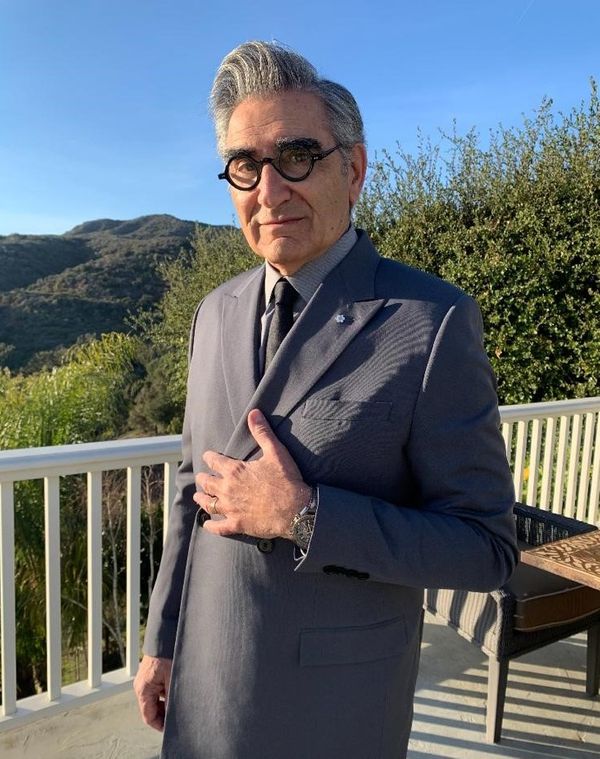 Omega Speedmaster Grey Side of the Moon Key Features:

Eugene Levy, who was nominated for Best Actor in a Musical or Comedy TV Series for his role in Schitt’s Creek took home a Golden Globe when the show won the award for Best Television Series – Musical or Comedy. Spotted on his wrist was the Omega Speedmaster Grey Side of the Moon “Meteorite” that could be seen peeking out from his cuff during the digital event. 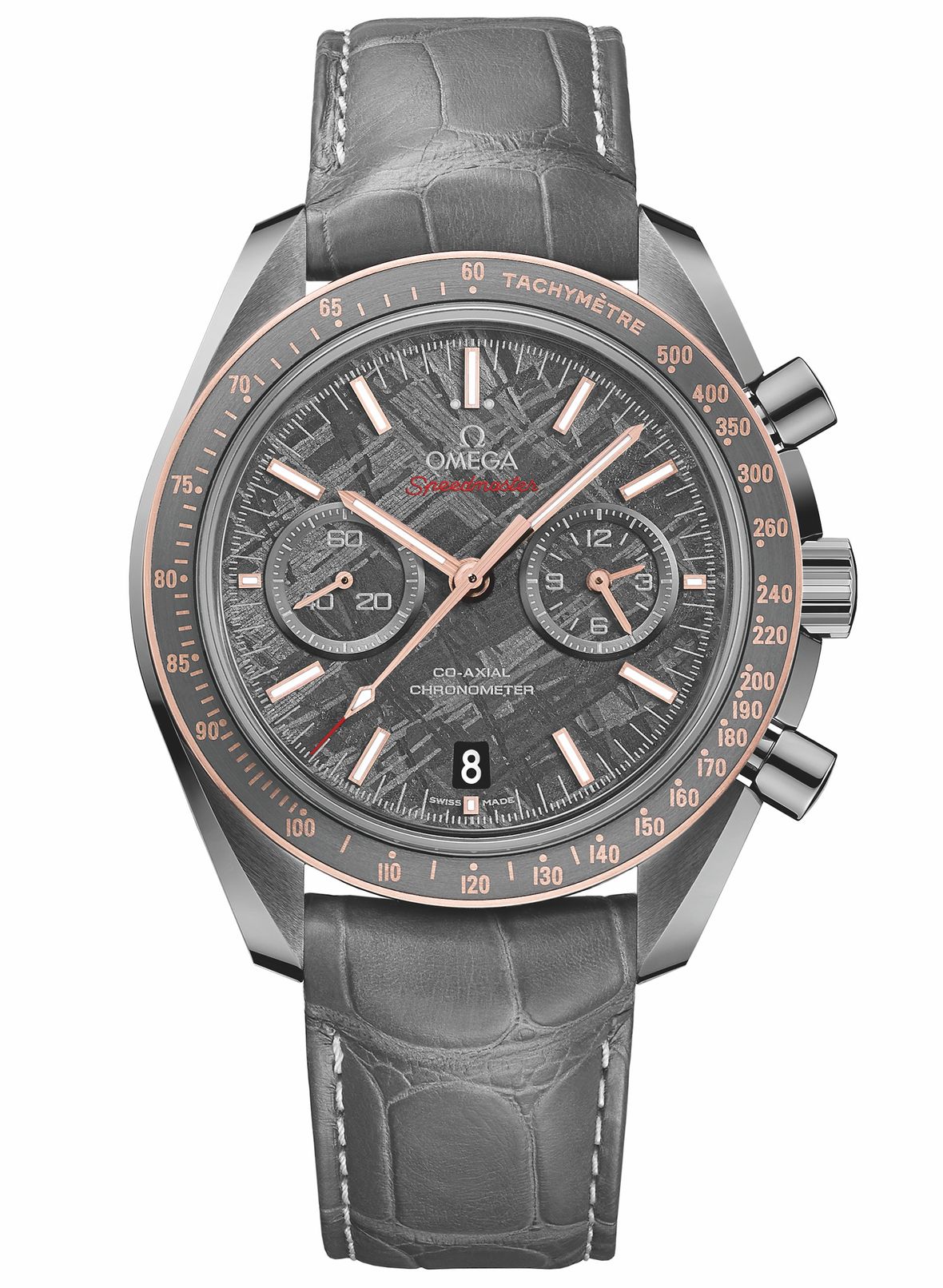 Featuring a 44.25mm case constructed from solid grey ceramic, Eugene Levy’s watch includes an 18k Sedna gold hands and matching bezel in Sedna gold and fitted with a silicon nitride insert with a Ceragold tachymeter scale. Powering the watch is the Omega Calibre 9300 movement, which features the brand’s Co-Axial escapement, a silicon balance spring, double mainspring barrels, and an integrated chronograph controlled by a column wheel and vertical clutch system.

Completing the watch is a matching grey leather strap with a titanium foldover clasp. However, the real party piece of the watch is its meteorite dial with complementary 18k Sedna gold hour markers. Since meteorite is a naturally-occurring substance, the different crystalline grain structure varies from one example to the next, and no two watches will be exactly alike. Given the Speedmaster’s association with space exploration and the out-of-this-world nature of the meteorite material itself, this watch represents a natural pairing and looked the part with Eugene Levy’s matching grey suit

Previous Article Rolex Sky-Dweller Setting Instructions
Next Article Why Is It So Hard to Find the Rolex Daytona?