The GMT Master II ref. 16710 is one of the most iconic and influential examples of the brand’s multi-time zone pilot’s watch. It brought an upgraded case and movement to the line, making it a huge success and leading to its impressive production run of almost twenty years. The ref. 16710 was then replaced by the ref. 116710 in the late 2000s as a completely new generation of Rolex GMT-Master tool watches began to make an appearance with a brand new case and bracelet design, improved materials, and a new movement.

When Rolex introduced the newly redesigned GMT-Master II in 2005, it signaled a new path – not only for the famous pilot watch, but also for the brand’s sports watches at large. The GMT-Master II was the first Rolex watch to come equipped with the Cerachrom ceramic bezel – a design detail now present on most Rolex ‘Professional’ models. While there’s no denying the appeal of the ultra-modern ceramic bezel, the classic aluminum bezels of past GMT-Master II models offer a completely different charm. Let’s compare the Rolex GMT-Master II 116710 vs. 16710 to see if either model can claim to have the better bezel

Rolex developed the GMT-Master in the early 1950s at the request of Pan Am Airlines. Its release came during the dawn of international flight. The famous air carrier required a dual-time wristwatch to issue their pilots, and the GMT-Master was born. The GMT-Master II was released a number of years later in 1983 with the ref. 16760, and brought with it independent hour hands that allow the wearer to read two time zones on the dial and a third on the bezel.

The first GMT-Master II ref. 16760 featured a bulkier case and is often referred to by avid collectors as the “Fat Lady” or “Sophia Loren.” In 1989, Rolex would release a refined variation of the Fat Lady GMT in the form of the sleeker reference Rolex 16710 with a thinner case and movement. The ref. 16710 was well-received among collectors for its upgraded case and movement, and it would go on to become one of the most successful GMT-Master II models, remaining in production for nearly twenty years.

A completely redesigned version of the stainless steel Rolex GMT-Master II was introduced in 2007, which meant the discontinuation of the long-running ref. 16710. The Rolex 116710 is similar in design as its 5-digit predecessor with an all-steel finish, a perpetual movement with independent hour hands, and a bidirectional bezel; however, that’s where its similarities end. The ref. 116710 is almost an entirely new watch and boasts a redesigned bezel, case, bracelet, and dial, as well as the newer Caliber 3186 perpetual movement. 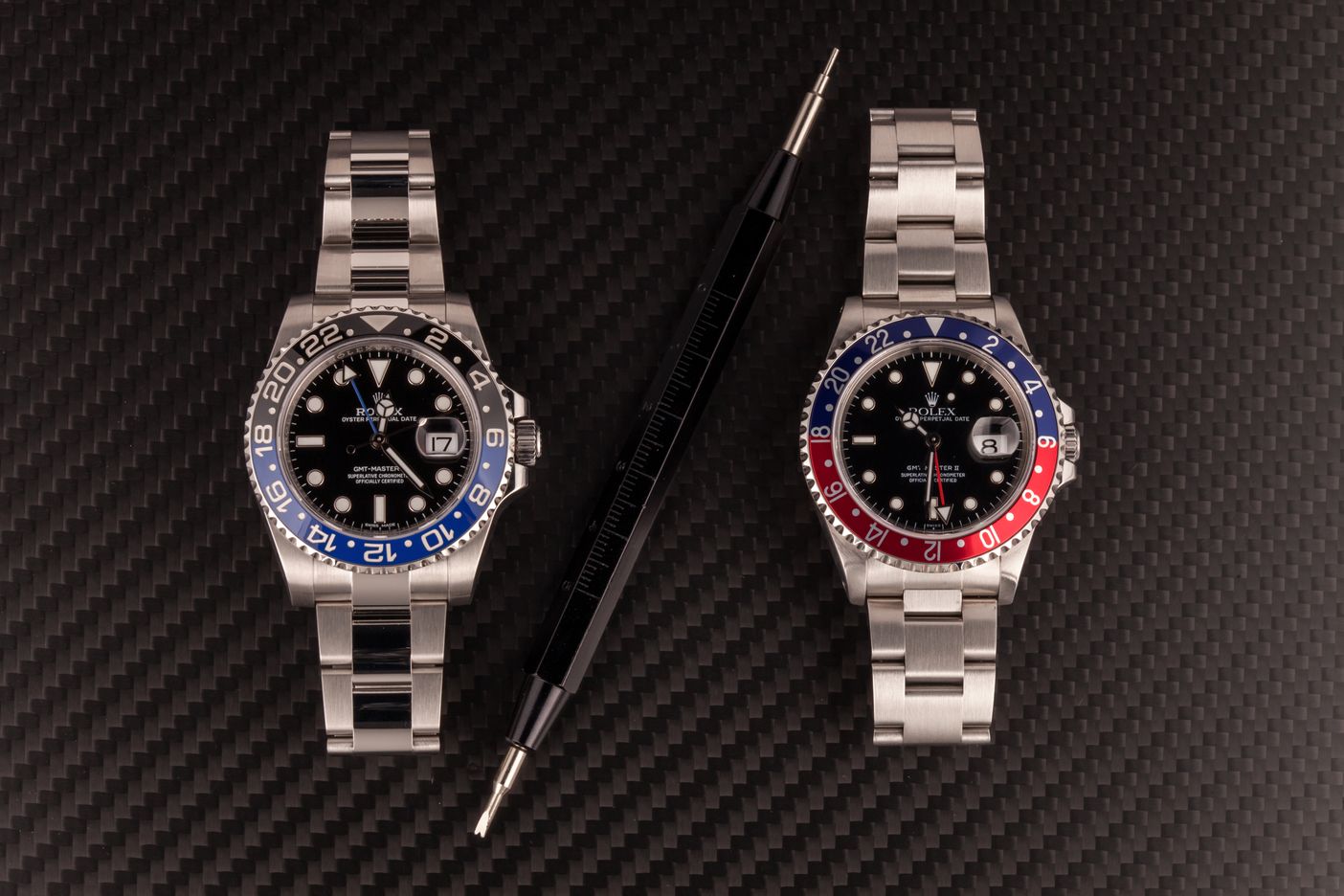 Which Rolex GMT-Master II reference is your favorite?

The Oyster Case: Old and New

The ref. 16710 is outfitted with a standard 40mm Oyster case with water-resistance up to 100 meters and a protective sapphire crystal over the dial. The bezel is equipped with an aluminum insert in either all-black, red and blue, or red and black. Depending on the year of production, the watch is also available on the secondary market with cases that have either lug holes or no lug holes, and the luminous material on the dial will vary, as Rolex made the switch from Tritium to LumiNova during the production of the reference 16710 GMT-Master II.

With the release of the ref. 116710 came a brand new case design that includes the upgrade to a triple-sealed Triplock screw-down crown, a new bezel mounting system that operates on 24 clicks instead of 120, a tougher “Cerachrom” bezel insert crafted from a scratchproof ceramic material, and a “Maxi” dial topped with larger hour markers and wider hands. The 40mm case also received a larger crown guard and wider lugs, earning it the nickname the “Super Case” among collections due to its thicker and more aggressive overall appearance. 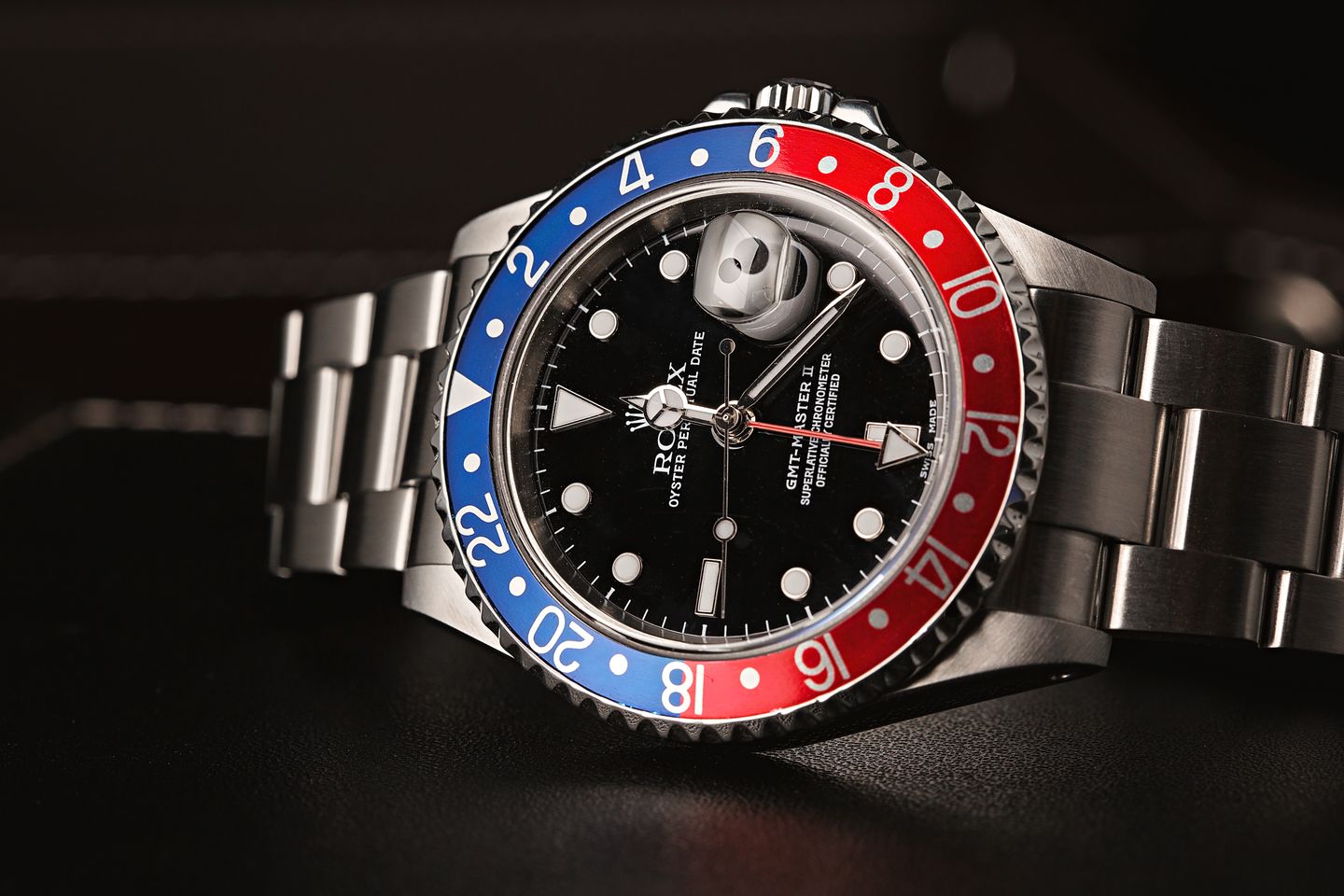 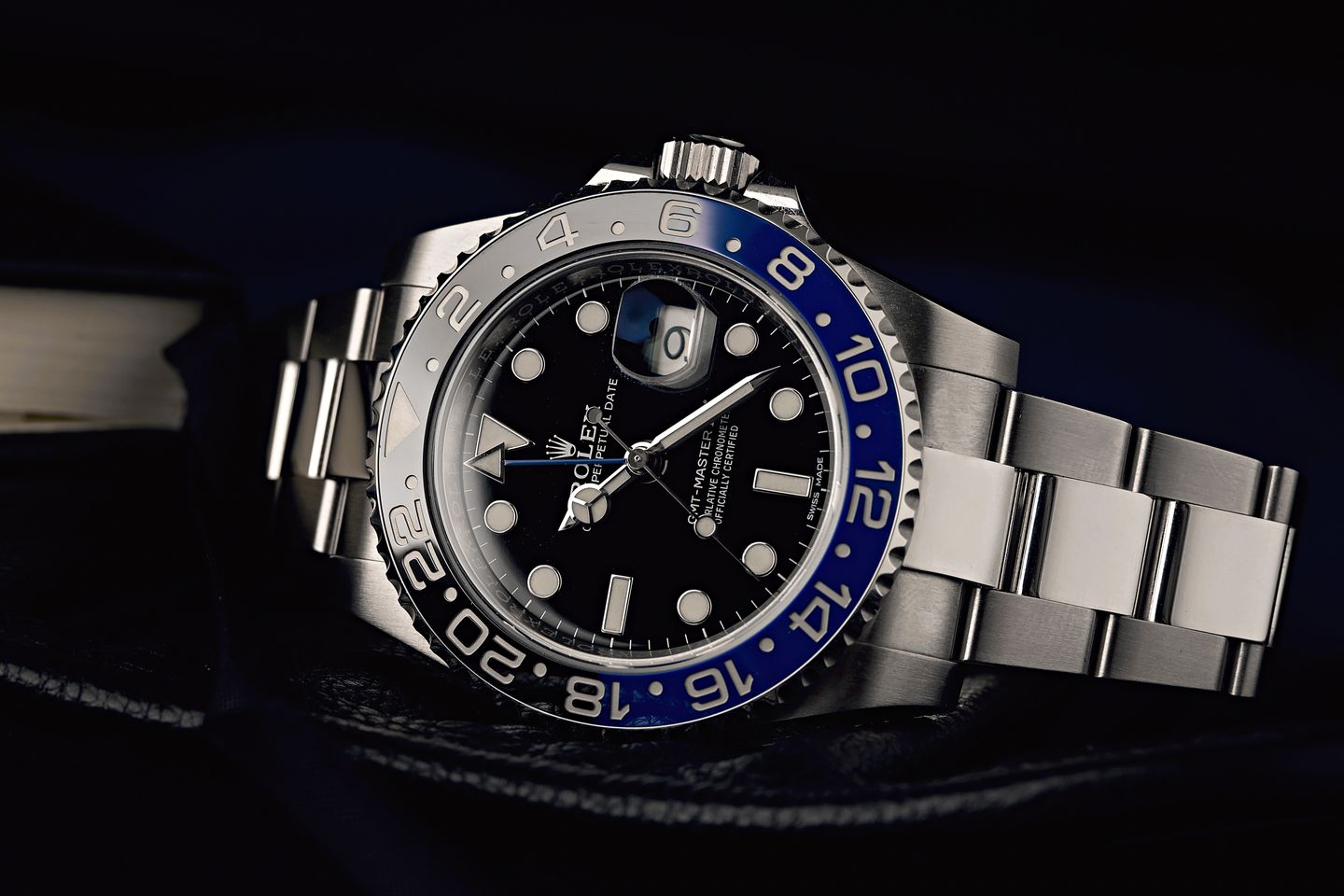 The Bracelet and Clasp

The ref. 116710 is only produced on a three-link Oyster bracelet. As a newer variation of the GMT-Master II, the bracelet is equipped with solid end-links, solid center links, and a newer Oysterlock clasp with a 5mm Easylink comfort extension system. Many collectors prefer this example of the Oyster bracelet as the redesigned clasp allows the wearer to adjust the length without the use of tools as their wrist fluctuates in humid or hot weather.

The GMT-Master II is an absolute legend, there’s no argument about it. What it comes down to when comparing the 16710 and the 116710 is personal taste. Do you prefer the classic styling of an older sports watch? Or do you prefer a contemporary timepiece that has all the latest and greatest technologies? Either way, the Rolex GMT-Master II is a must-have for any serious watch collection. 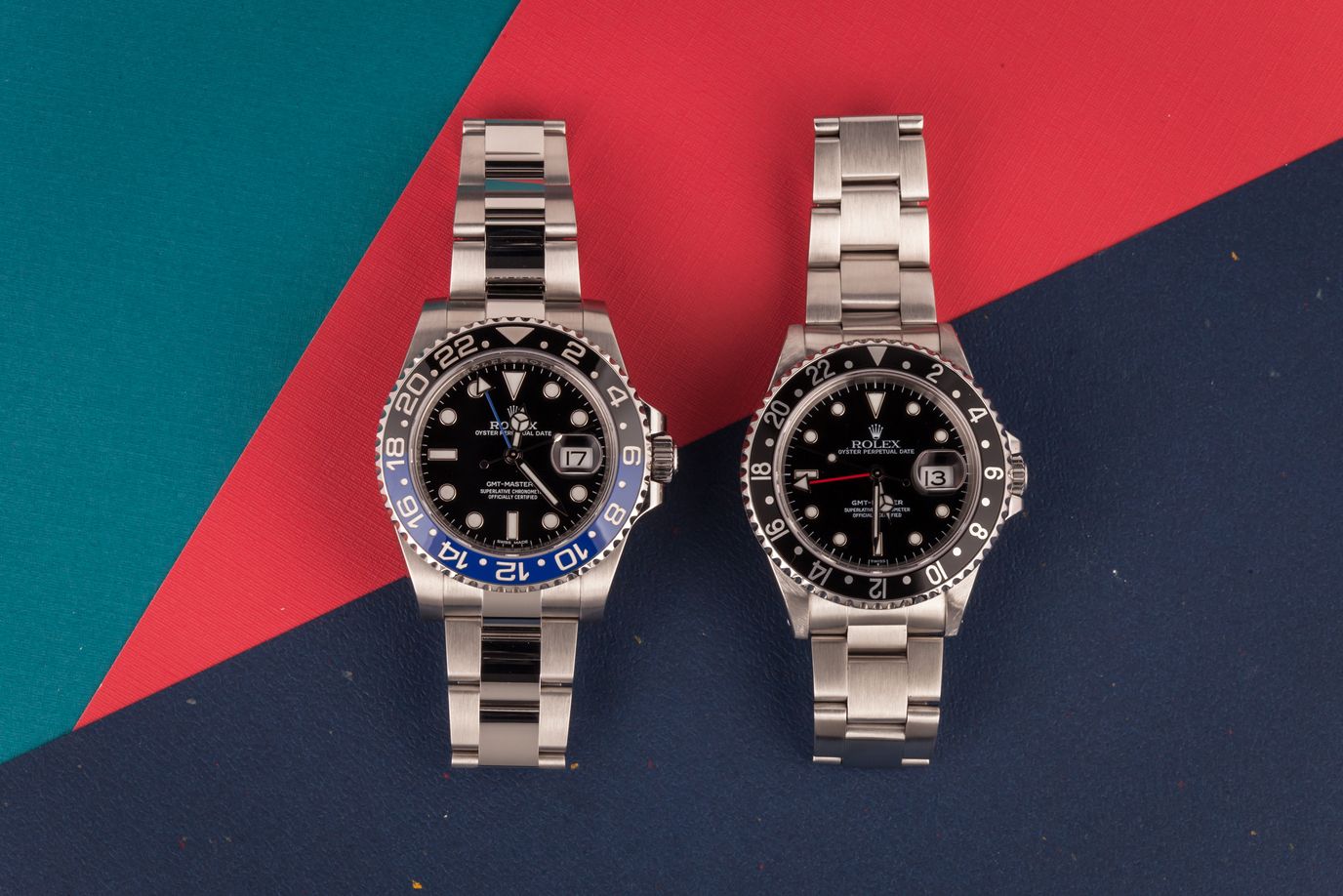 Aluminum was Rolex’s go-to material for the bezel on the GMT-Master (and other models) for decades. While aluminum bezel inserts look great and are offered in a slew of colors, they do have a tendency to fade over time, and can also get pretty scratched up through normal wear and use.

To combat this, Rolex developed the Cerachrom bezel – one of the brand’s most significant design innovations to date. Crafted from hard ceramic, the Cerachrom bezel is resistant to fading and scratching. What’s more, unlike aluminum bezels that have printed numerals, the markings on the Cerachrom bezels are engraved into the ceramic, filled with platinum or gold, and then diamond polished. The resulting effect is a bezel that offers a fantastic sheen and one that will retain its legibility and beauty for decades.

Rolex produced the GMT-Master II ref. 16710 with aluminum bezel inserts from the late-1980s until the mid-2000s. During that time, the watch was available with three different bezel colors. There’s the classic red and blue “Pepsi” bezel, the beloved red and black “Coke” bezel, and the understated monochromatic all-black bezel. 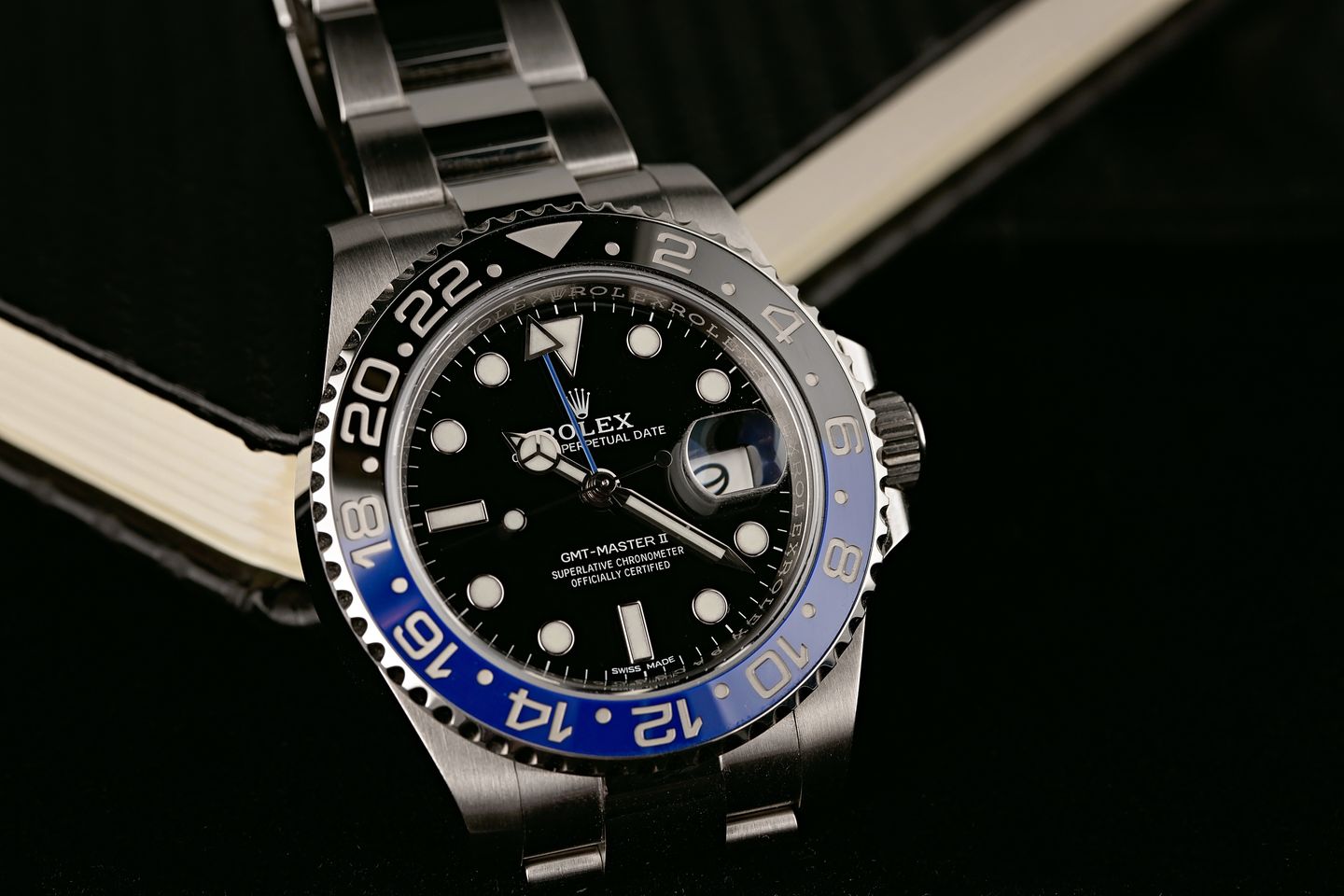 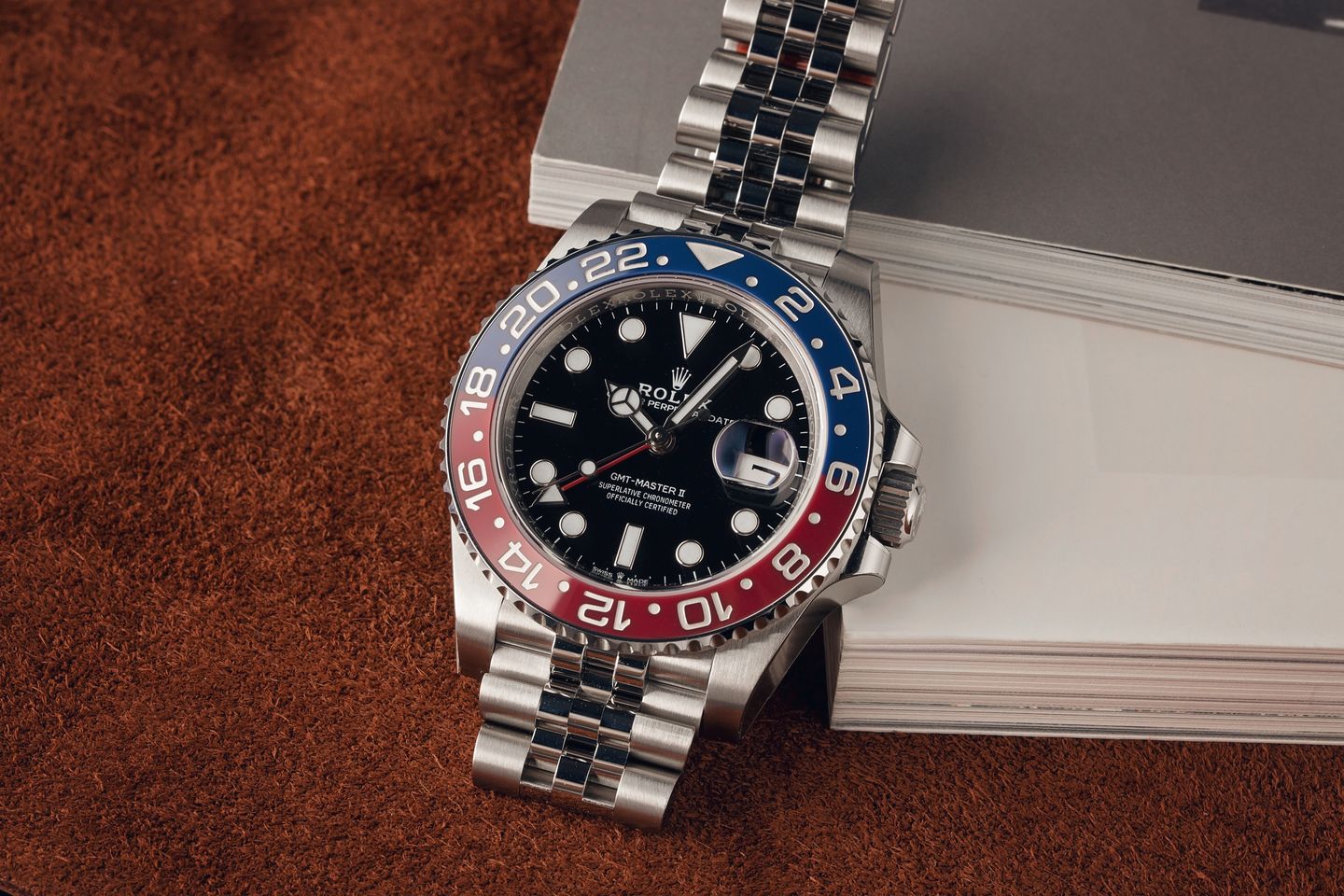 When deciding between the Rolex GMT-Master II 116710 and the GMT-Master II 16710, it essentially comes down to whether you want a modern take on the famed pilot’s watch or one with a more classic and traditional style. Plus, there are color options to consider. Both models have their devotees, and since they are fairly different looking watches, there’s no reason not to own both!