The Other Ceramic Rolex Daytona: The Ref. 116515LN

Before the highly-sought-after steel and ceramic Rolex Daytona, there was another Daytona with a black Cerachrom bezel: the ref. 116515LN. This Everose beauty is a fantastic version of the famous Rolex chronograph so let’s check it out. 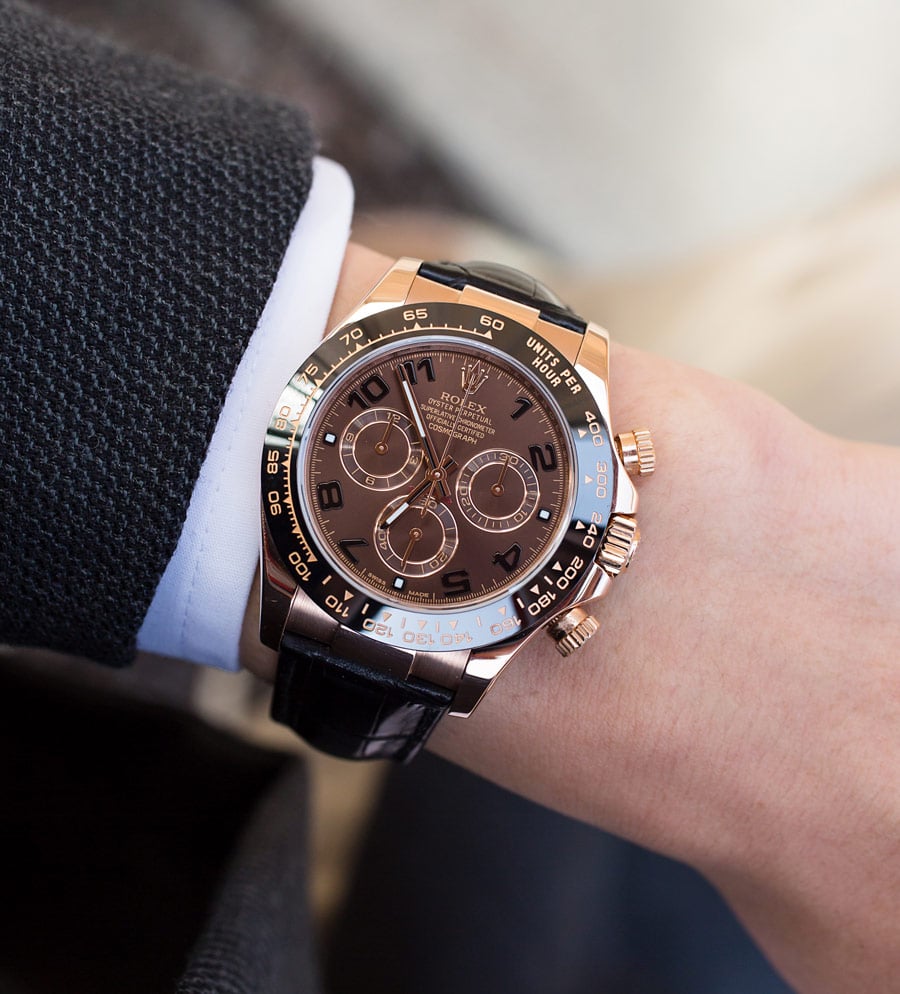 This is the ceramic Daytona from Rolex.

The Daytona ref. 116515LN made its debut at Baselworld 2011 and has been a popular model among the more expensive Daytona options. And that’s no surprise. Its 40mm Oyster case in 18k rose gold pairs impeccably well with the black ceramic bezel. A quick note on the gold and ceramic materials; these are not standard “off-the-shelf” varieties, but rather, Rolex-enhanced ones. The metal is the Rolex-exclusive rose gold alloy—aka Everose—which the brand claims will not fade over time. On the other hand, the Cerachrom ceramic bezel is yet another Rolex patent where the material is not only resistant to scratching but will also not fade even after decades of exposure to the sun. 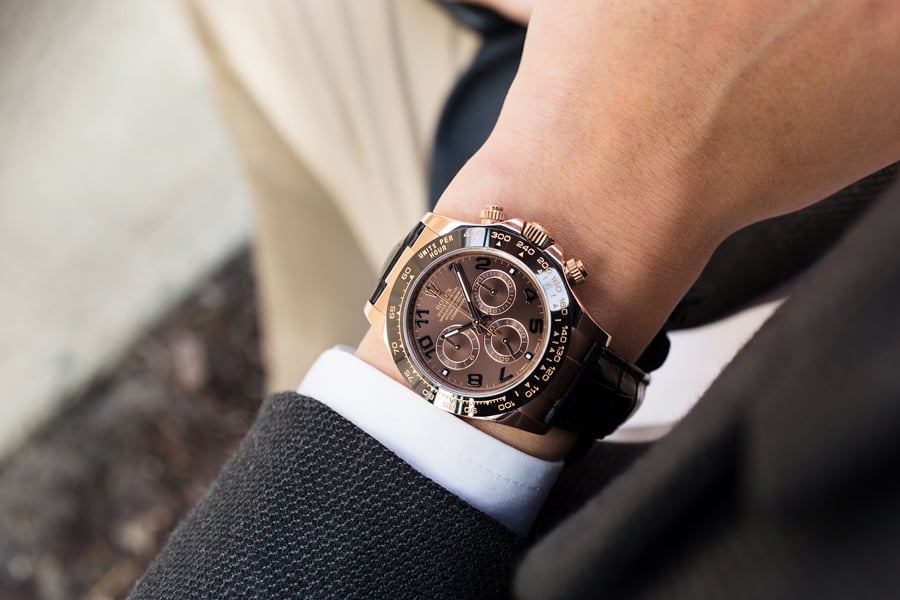 This is a popular model among the more expensive Daytona options.

As with all versions of the Rolex Daytona, the ref. 116515LN includes an engraved tachymeter on the bezel—an integral component to the chronograph function. This scale, in conjunction with the chronograph, permits the wearer to measure 400 units (whether kilometers or miles) per hour. This is what ultimately makes the Daytona Cosmograph a racecar driver’s watch. The center chronograph hand is accurate to within 1/8 of a second. Along with the main chrono hand, there’s also the 30-minute counter subdial at 3 o’clock and the 12-hour counter subdial at 9 o’clock. Those two registers are also joined by a small seconds indicator at 6 o’clock. The layout of the three registers (in addition to the pushers at 2 and 4 o’clock) is a big part of what gives the Daytona its famous look. 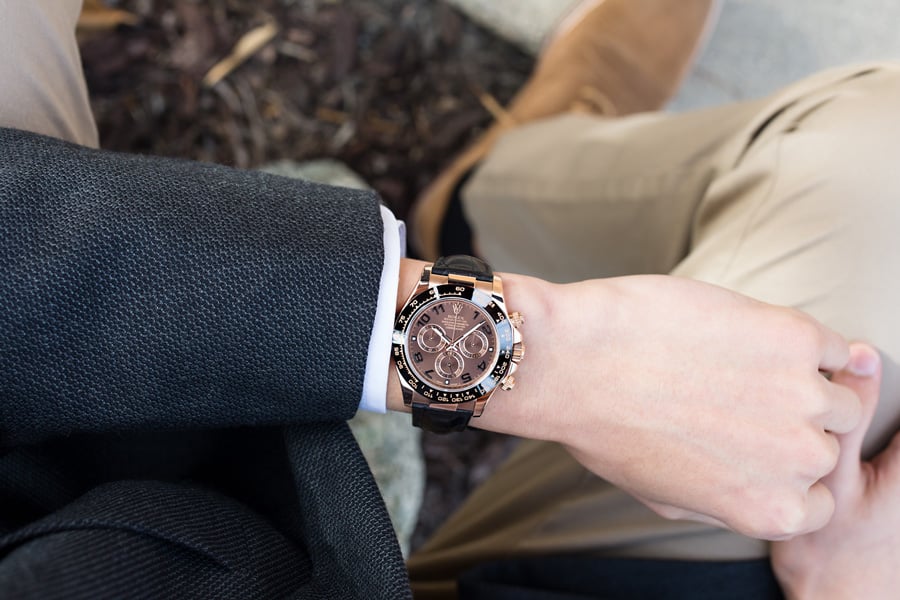 The ref. 116515LN includes an engraved tachymeter on the bezel.

The dial of this specific Rolex Daytona ref. 116515 is chocolate brown with Arabic numerals, but there are other dial options too, such as cream and rose gold. 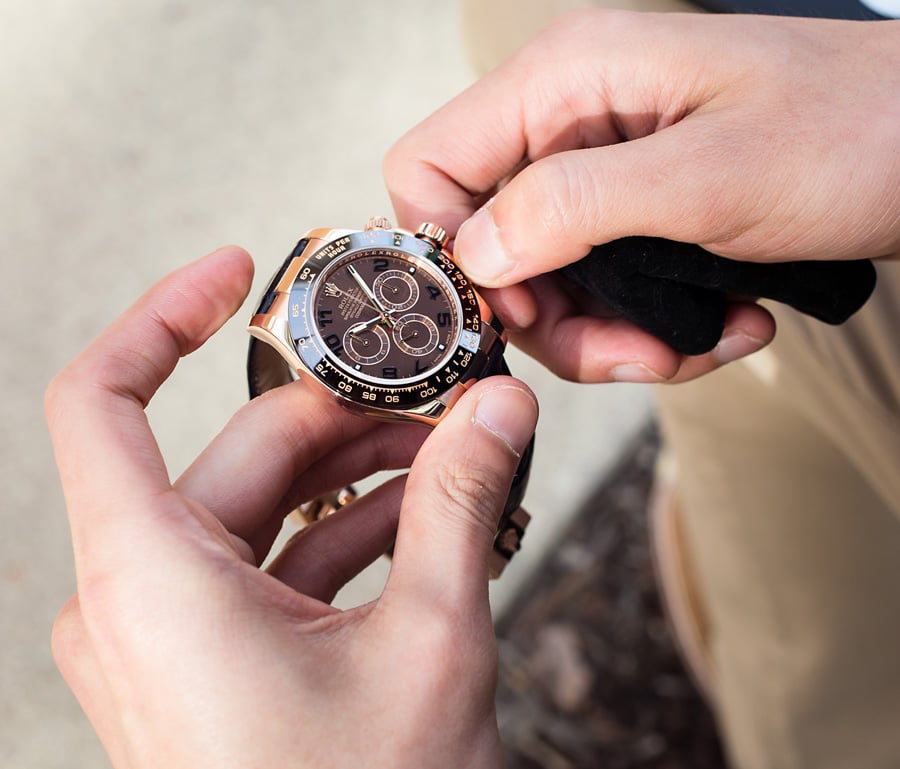 The center chronograph hand is accurate to within 1/8 of a second.

Released in 2000, the Caliber 4130’s first home was in the then-new Daytona ref. 116520. This Rolex manufacture chronograph movement took five years to develop and boasts the more efficient vertical clutch construction rather than the more traditional lateral one. Essentially, the vertical clutch approach eliminates the “jumpiness” of the chronograph hand and offers one with smooth motion instead. What’s more, it also reduces the chronograph function’s negative effect on the watch’s accuracy. Also, the proprietary Rolex chronograph caliber requires fewer components than a standard chronograph movement, thus improving reliability. As we’ve come to expect, when Rolex takes on a challenge, they eventually present a better alternative that what’s already available. 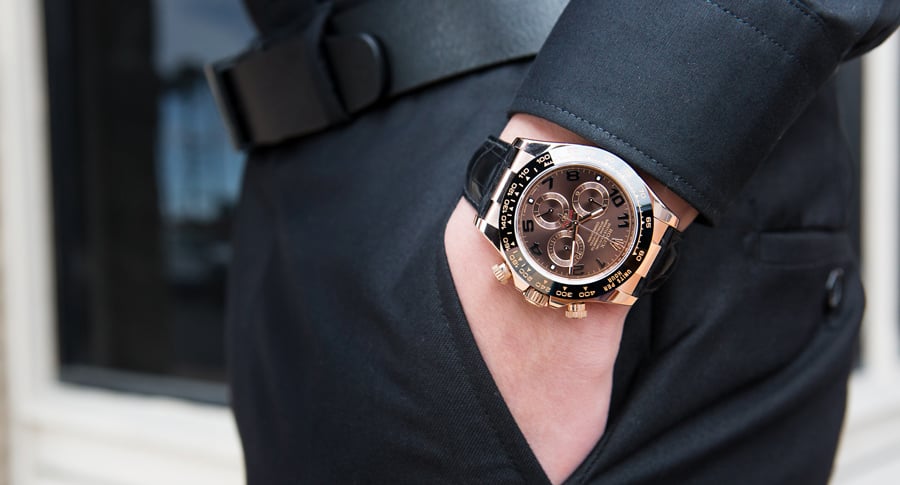 Would you add the Oysterflex to your Daytona?

While this particular Everose Rolex Daytona ref. 116515 is presented on an elegant black leather strap, this option is currently not available on the Rolex website. Instead, the brand has the Daytona ref. 116515LN on an Oysterflex bracelet instead. The Daytona with the Oysterflex is, in fact, brand new—Baselworld 2017 new! Does this mean that Rolex will no longer produce the ref. 116515LN on leather? If so, better get your hands on this one quick before it becomes too difficult to find. We’ll be taking a close look at the new Rolex Daytona Oysterflex in an upcoming article, so stay tuned for that.

What are your thoughts on the Everose Daytona with the black Cerachrom bezel? Do you prefer it on a leather strap, metal bracelet, or the new Oysterflex?