The moon phase complication is one that has fascinated me from an early age. Before I knew life would take me down this path and make me into a watchmaker, I was drawn to these glittering objects in jewelers’ windows, like a magpie to a polished pin. No type of watch appealed to me more in those formative years than a luxury watch boasting a moon phase complication.

Why? It is hard to say for sure (especially since my current tastes lean far more towards rugged, vapor-blasted tool watches that look more suited to a combat situation than the wrist of a stately gentleman with time to concern himself with the waxing and waning of our silent satellite), but I think that before I really understood what was going on inside a watch, it was the elegant, artistic, slightly whimsical moon phase that best expressed that wonder on the outside. 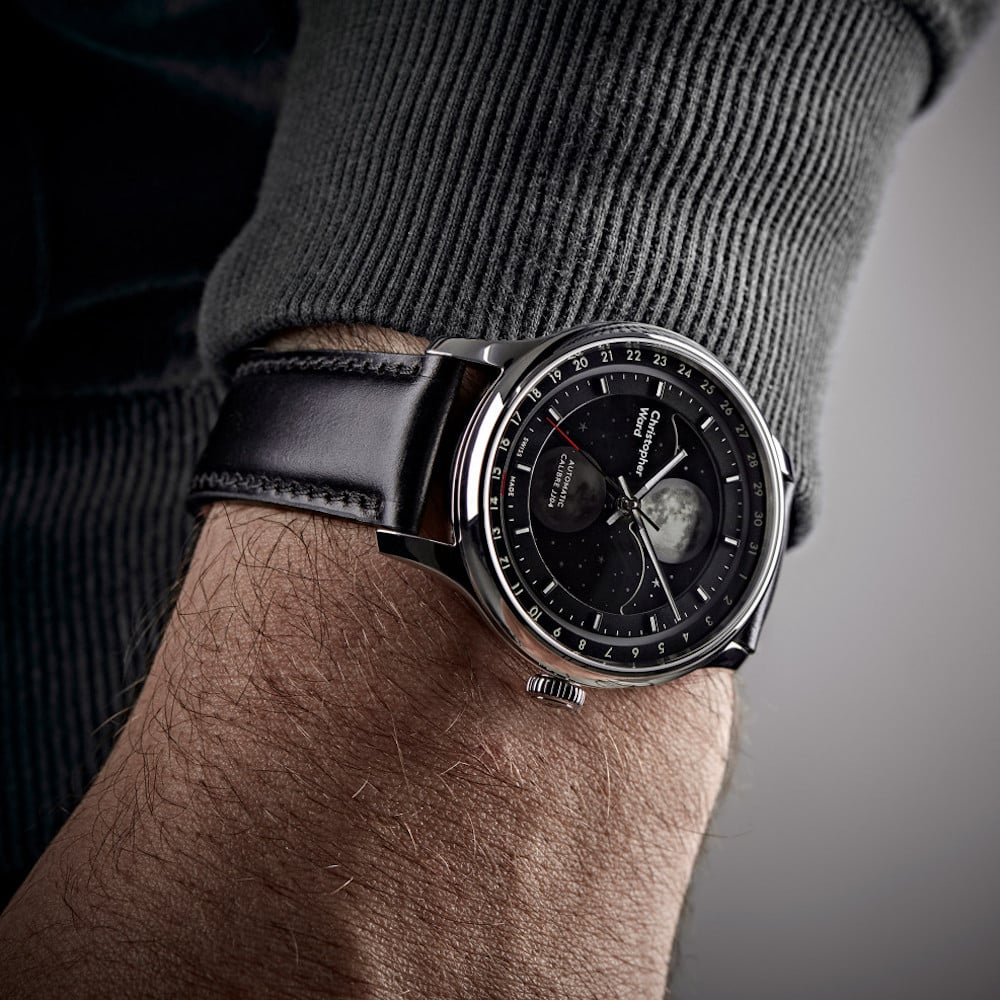 Truth be told, the majority of the “moon phase” watches I drooled over as a child were just rudimentary day/night indicators, using a moon disc to appear fancy. Eventually, in my early twenties when I was really getting into watches and thought (erroneously) that I knew what I was doing, I picked up a gold-plated Rotary that boasted a handsome navy blue and gold moon phase at six o’clock and a pusher-operated pointer day/date split over sub-dials at 3 and 9 o’clock respectively. This watch, which honestly, for all its flaws, went a long way towards convincing me to become a watchmaker, was not the kind of thing I would lust after these days, but it introduced me to a ubiquitous style of moon phase complication that I’d never seen before. For that, I will be eternally grateful to it. 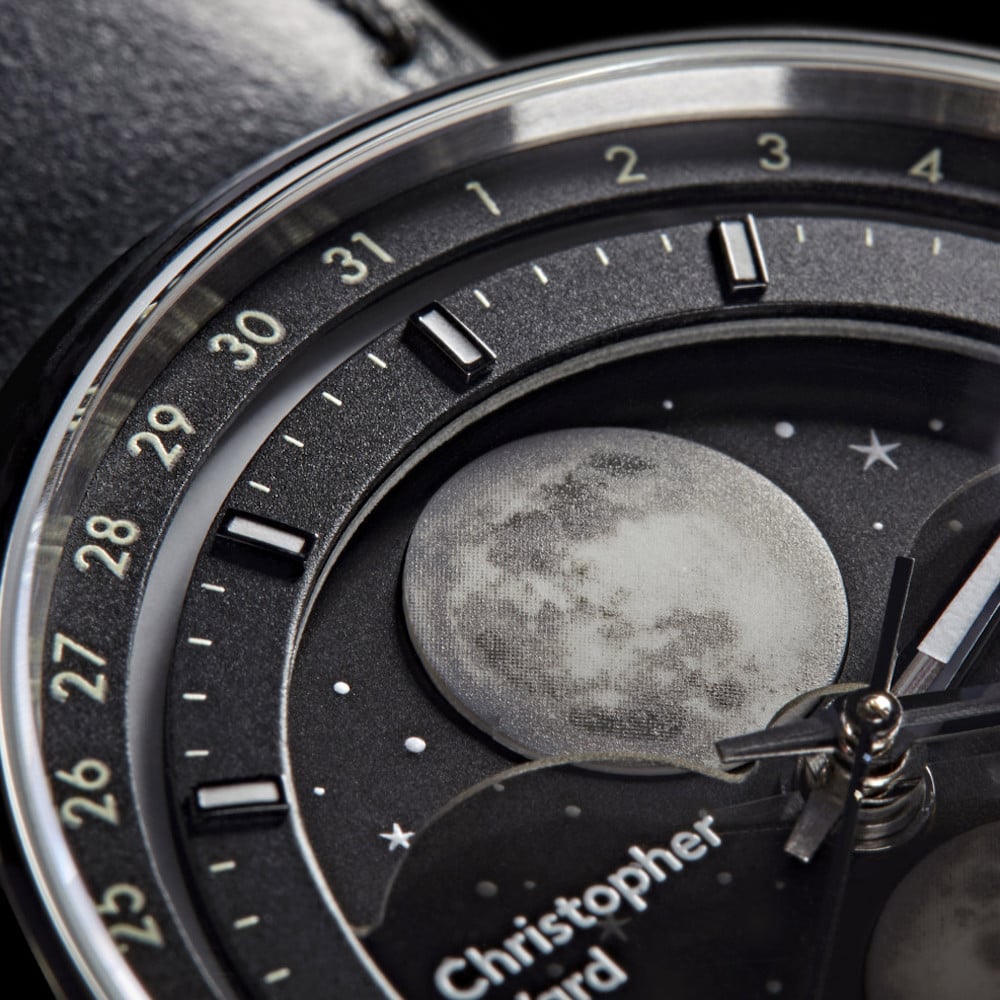 The Rotary in question has a simple moon phase indicator on the dial. Through a half-moon-shaped aperture at 6 o’clock, the moon could be seen traveling across the night sky, waxing and then waning before being reborn again, appearing on the left-hand side of the aperture just as it disappeared on the right. As a total novice, I was very impressed with this. It was years before I learned that this simple trick was achieved by the moon disc being printed with two moons, not one. 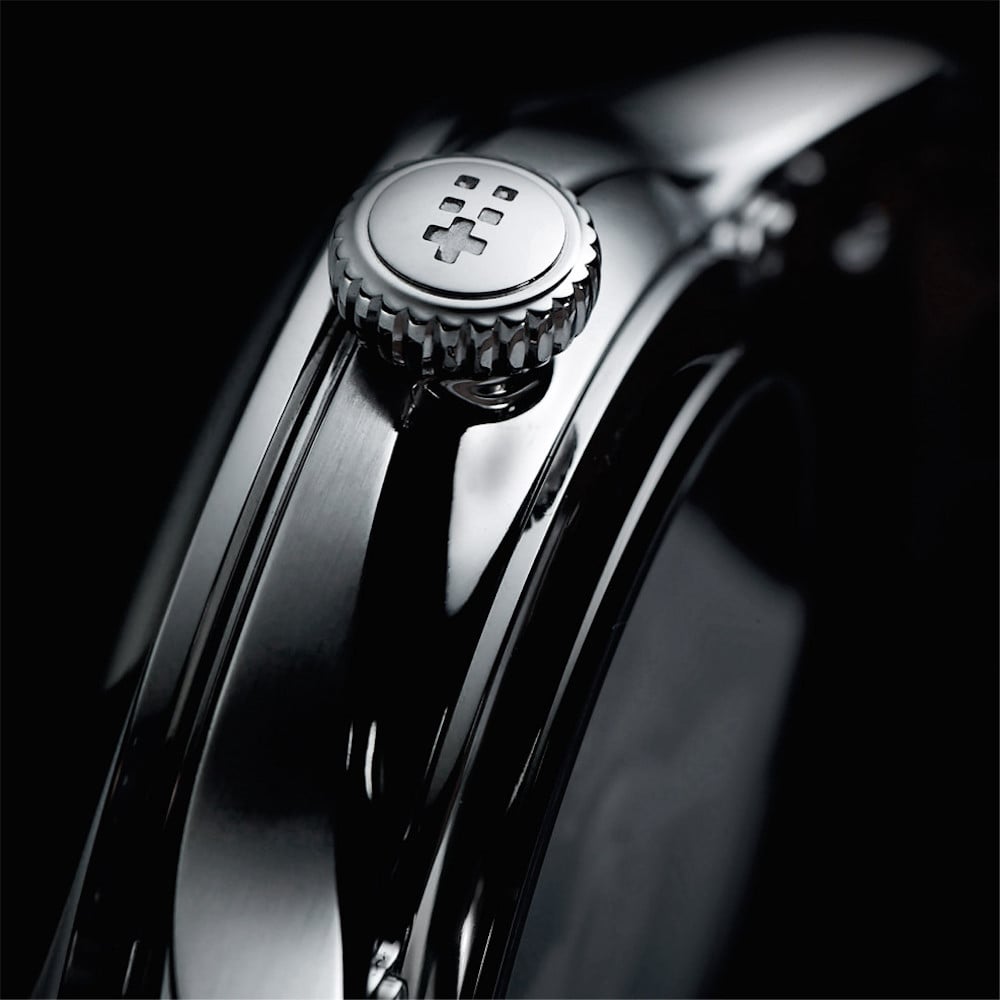 As it turns out, this is necessary for the gearing of a simple disc-driven moon phase display, given the life of a moon is (very roughly) 29.5 days. It isn’t possible to make a working wheel with half a tooth, so the number was simply doubled to 59, and the two moons or “double moonphase” (which will represent back-to-back phases of the moon for every full rotation of the disc) are printed on opposite sides of the nocturnal vista.

Understanding that is pretty easy once you’ve been told. But integrating that display into a watch that is not only modern but somehow broodingly masculine is no easy feat. That is, in my opinion, what British Watchmaker Christopher Ward has achieved with the release of the Christopher Ward C1 Moonglow watch. 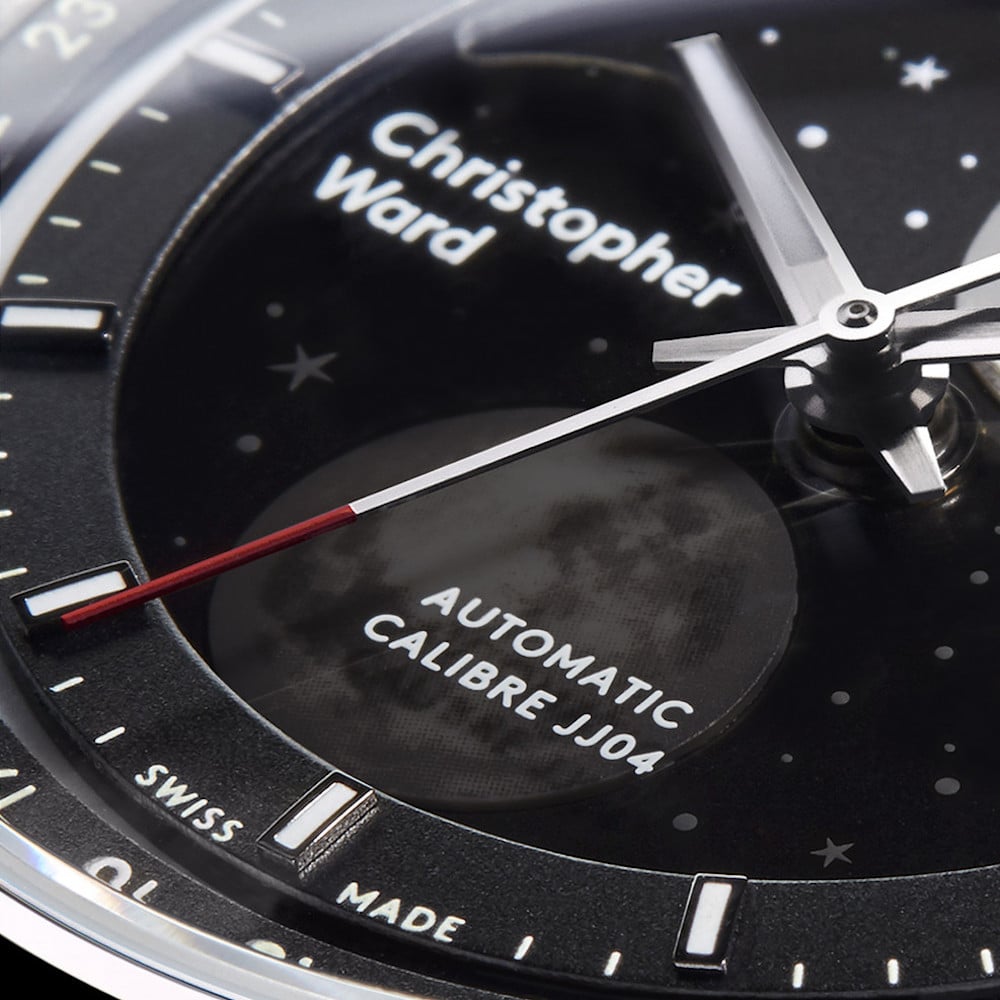 Following the release of the Hermes Arceau de la Lune at Baselworld 2019, I thought I’d seen my favorite moon phase watch of the year, but, with all things considered (especially price), that majestic representation of the celestial dance has been topped by this release.

Look, if someone offered to give me one of these watches for free, I would (of course) still take the Hermes. But given how little there is to choose between to two, I’d probably sell it instantly, buy five of these Christopher Wards for me and my friends, and then book a group holiday to Monaco with the change. 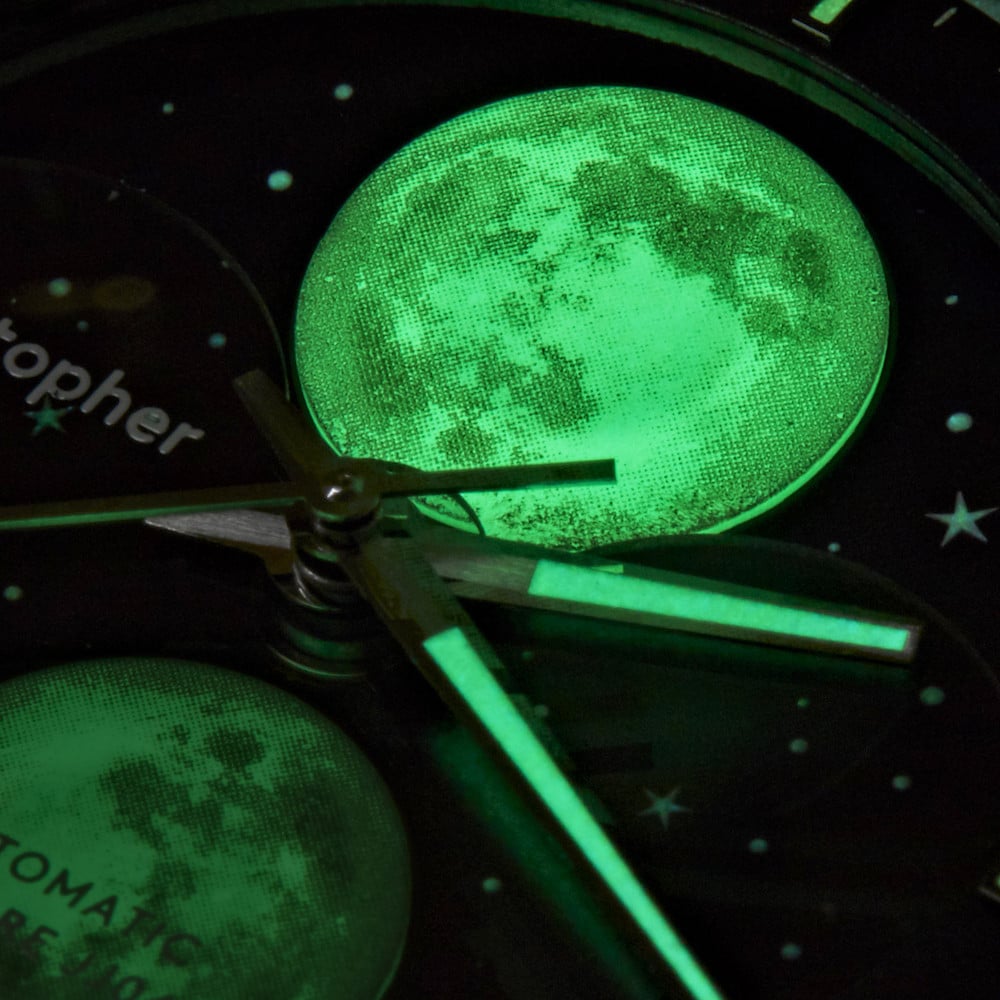 But why is it that I’m so taken by this piece? What makes it stand out more than any other moon phase at this price point? Sure, the movement is good – really good for the money, actually –  but it is the same as the movement used in the previous Christopher Ward moon phase watches in the Malvern collection (of which this watch is technically a part, though not in name).

It is the display. The unusual modernity for a moon phase in this price bracket. The playful, 3D moons, the liberal use of Grade X1 GL C1 Super-LumiNova that gives off the eponymous “moonglow”, the smoked crystal that gives the lower half of the dial a ghostly look, and the oh-so-cool date complication that can actually be read at night! 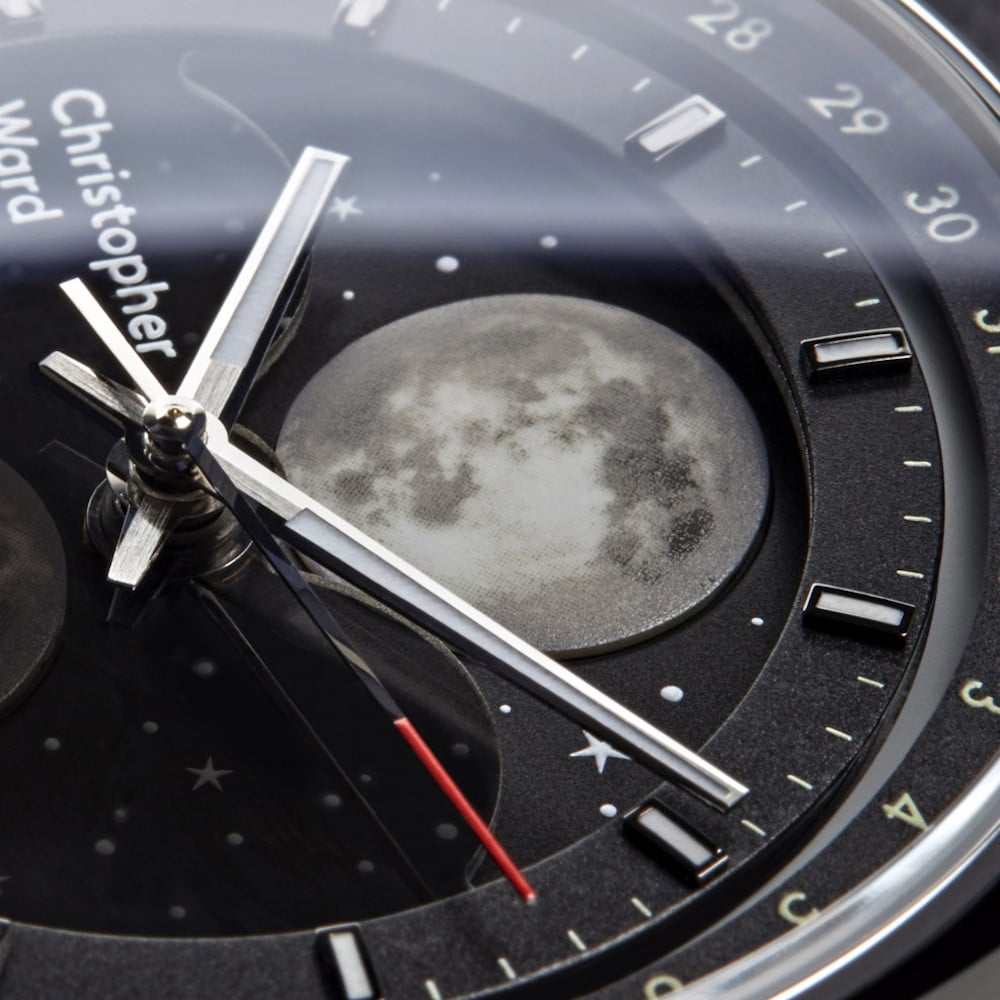 That last point is not to be taken lightly. While knowing the date in the middle of the night may not be that important that often, it is something too few watchmakers account for when they hit the drawing board. Why do I care? Well, the simple answer is: Why shouldn’t I? Watchmaking has long since been an obsolete art, where its followers fight over fractions of a second in accuracy, and fawn over high-end complications that have barely any practical use, so why shouldn’t the most ubiquitous complication (following the basic time) be as good as it can be, as often as possible? 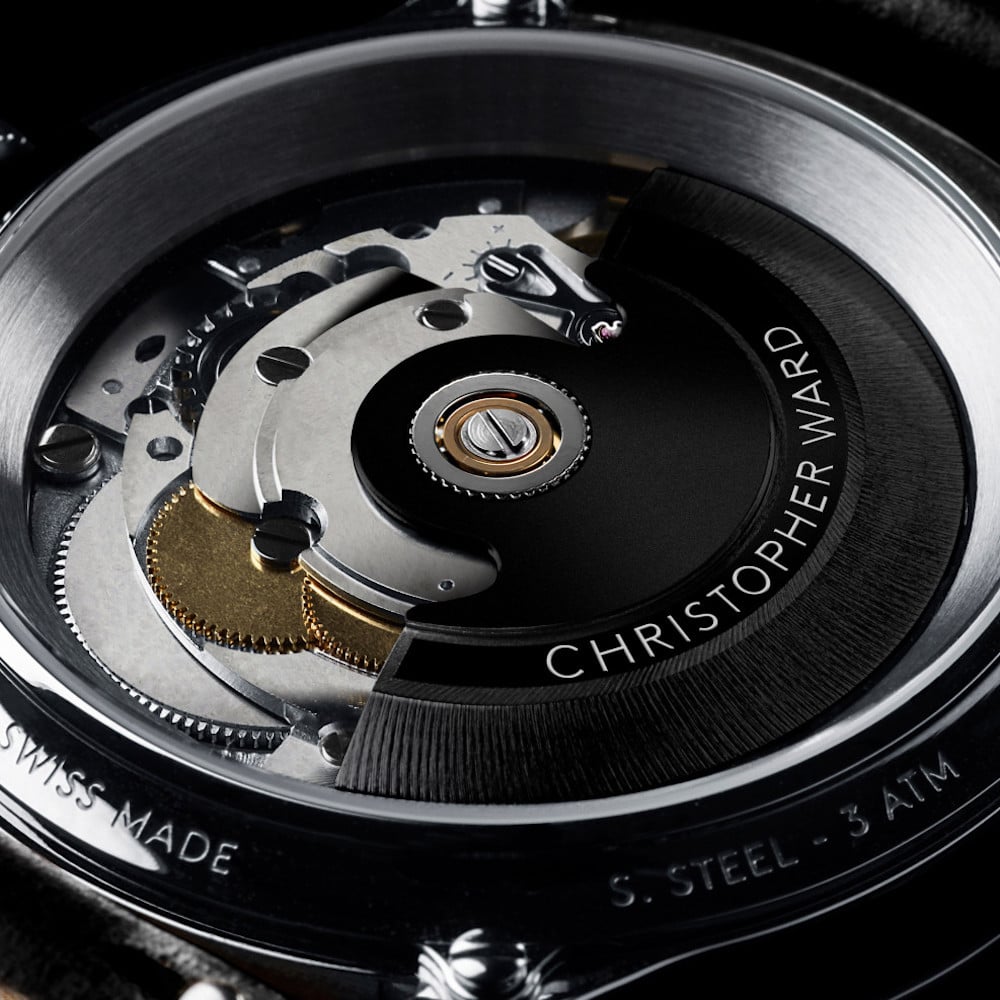 The date works with “negative” lume. By that, I mean that the correct date is the only part of the luminous track that encircles the moon phase portion of the dial that will not glow (thanks to it being obscured by a red marker than points out the day against the white background during daylight). The clever thing here is that the whole ring of lume rotates (not just the red marker). That means the date-ring always stays charged from its daily exposure (if the red marker were the only thing to move, the day left behind would not glow as it would not have been exposed to light while under the red marker). 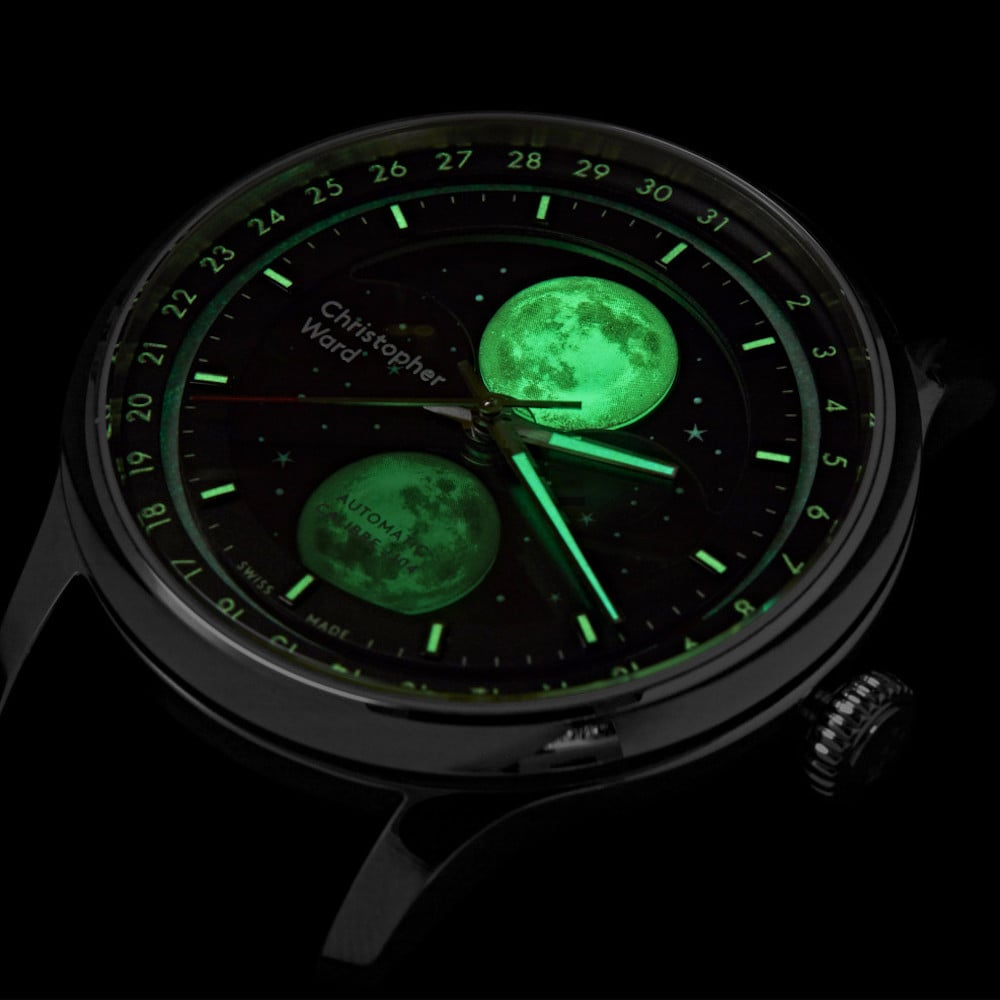 And while I downplayed the movement earlier, it is worth noting that the Caliber JJ04 is something special considering this watch retails for less than $2K. This modified caliber uses the ETA 2836-2 as a base but has a significantly modified dial-side. If kept wound, the JJ04 caliber can provide an accurate reading of the moon’s transit to one day every 128 years.

With that kind of performance, wrapped up in a classically sized 40.5mm × 12.35mm 316L stainless steel case that is water-resistant to 30 meters, and delivered on either a 20m leather strap or Milanese mesh bracelet ($1,935 and $1,970 respectively at the time of writing) in an eco-friendly presentation case, it’s pretty hard to find a reason to not invest in perhaps the best value package made available in celebration of the lunar module touching down, all those years ago.

*All images courtesy of Christopher Ward