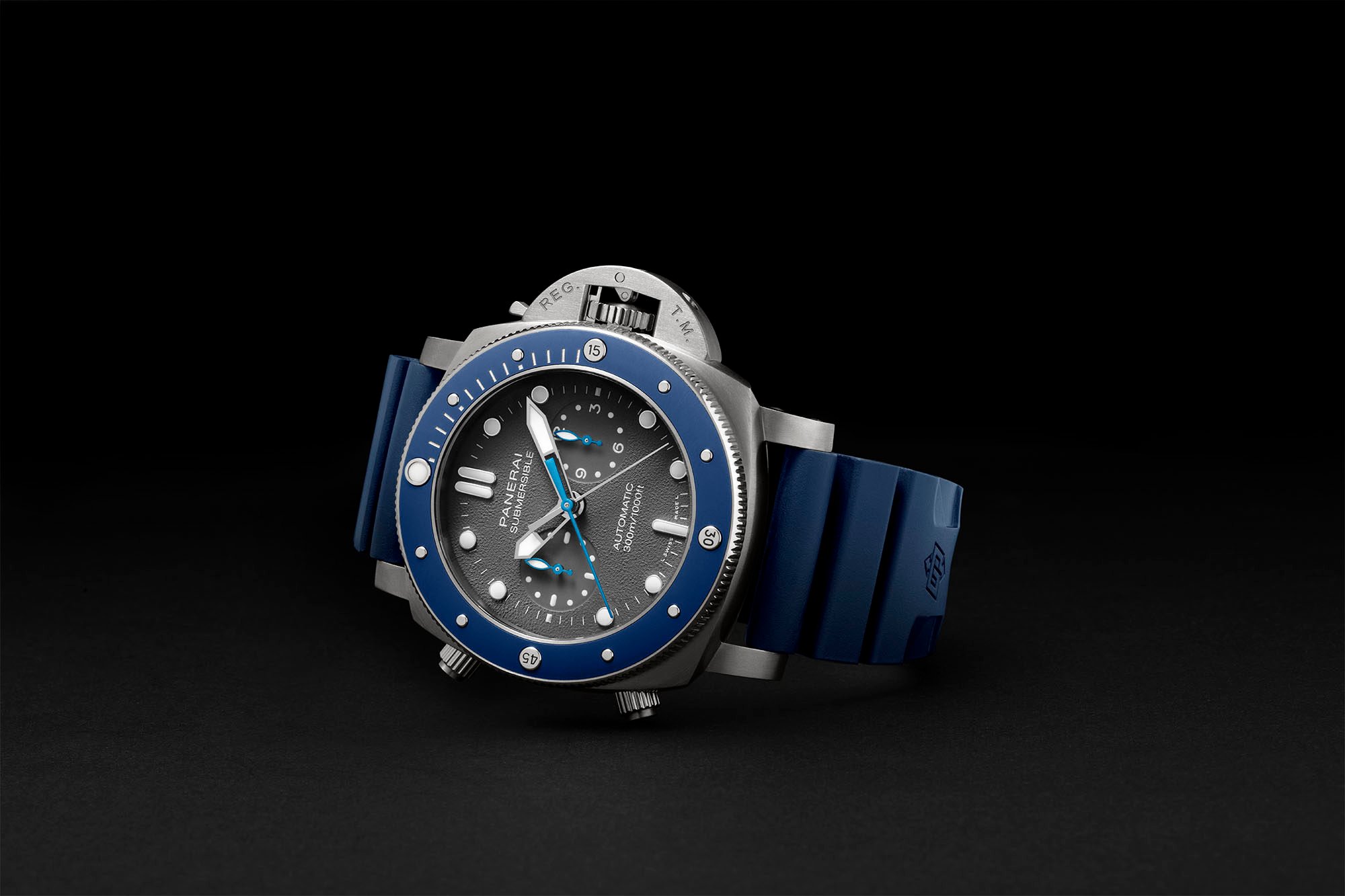 Notice how this Panerai Submersible from 2019 does not have the ‘Luminor’ branding on its dial? (Image: Panerai)

The prevailing trend for the last decade or two has obviously been for ever larger watches, with even the most stubborn traditionalists (we’re looking at you Rolex) being forced to release both new and updated models that go far beyond their time-honored 40mm dimensions.

In the world of Panerai, bigger has always equaled better and their wonderfully robust diver, the Luminor Submersible, is already available in 44mm and 47mm versions.

Undoubtedly one of the most recognizable watch series on the planet, with its iconic bridge-style crown guard, and easily among the coolest, would-be Paneristi have often found themselves sidelined by the oversized proportions. 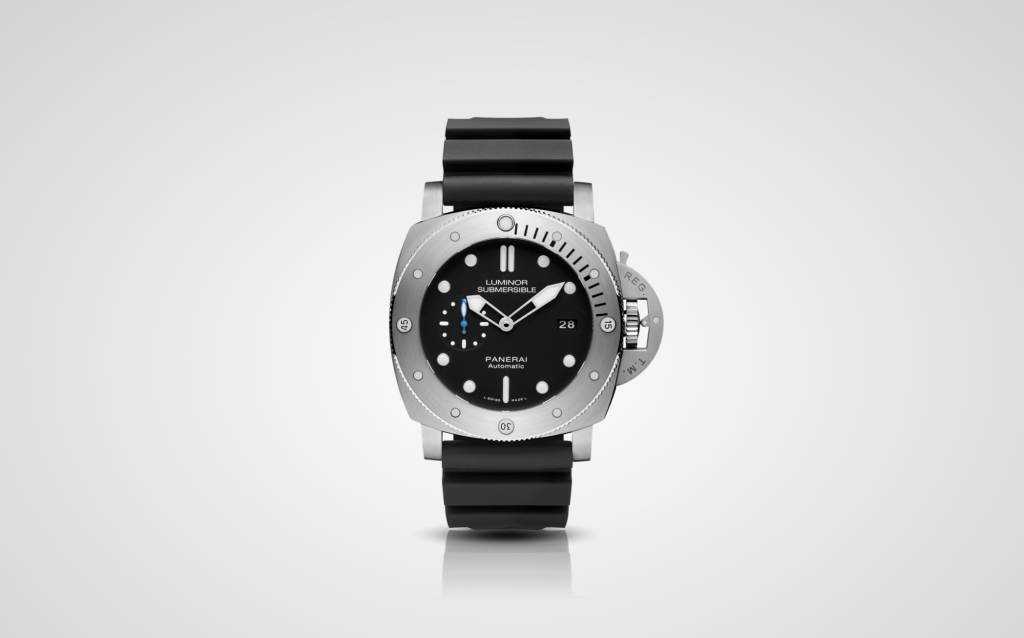 For those blessed with the forearms of Sylvester Stallone, the patron saint of Panerai, a 44mm or 47mm slab of steel on the wrist looks quite at home. For those of us with a more modest musculature, it was just a little, or far too much, watch.

At last year’s SIHH event, Panerai unveiled the answer to every non-Rambo’s dream when they launched a freshly scaled down 42mm edition of their Sub. While it may not sound like a lot, losing two millimeters off the midsize or a full half centimeter off the largest version makes a night and day difference to the overall aesthetic of the model. 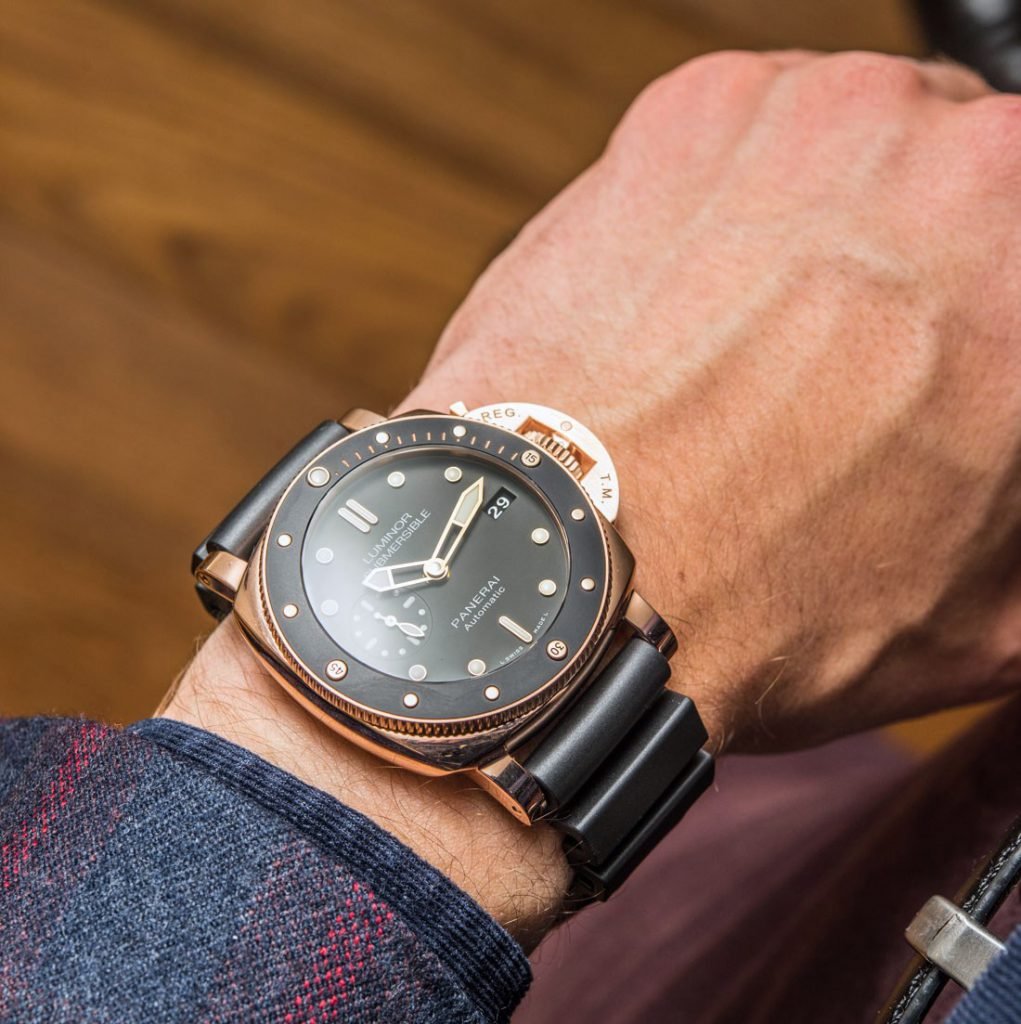 Available in steel (expensive) or rose gold (crippling) it has opened up the watch to a whole new and appreciative audience. While it may not be the first 42mm piece Panerai have made, it is the first Submersible in that size and consequently, the first one you could realistically wear under a shirt sleeve.

It is perhaps a sign of the times. Watches, after all, can only get so big before they become unwearable for enough people as to make them unprofitable.

The reduction of the Panerai followed the pattern of a number of other manufacturers in the last year, Breitling and Omega among them, to offer smaller versions of established marques.

Apart from the more all-inclusive size, nothing much else has changed. The dial is still as legible as they get, with large round indexes and batons at the 12 and 6. They are filled with plenty of lume, as are the tips of the two skeletonized main hands. On the steel version, the sub dial at nine o’clock is given a little pop of color with a bright blue sweep seconds hand, and one small difference with the 42mm model is the lack of magnifying lens over the date window at three o’clock. 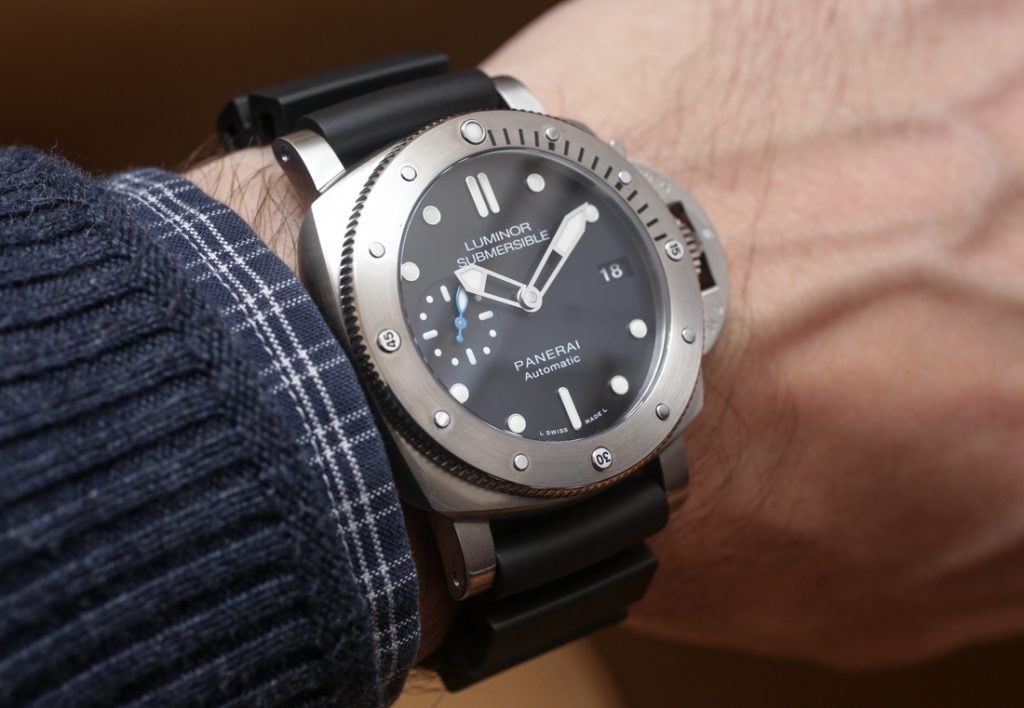 The 1950s case stays the same, impregnable from any angle and with the curves and creases that look like the bodywork of a sporty saloon car. It measures 51mm lug to lug, so still not a small watch, but with its short, downward sloping lugs it becomes a very manageable and comfortable wear.

It is also noticeably thinner than its siblings at just 14.5mm, and is equipped with the Panerai manufacture P.9010, which itself is slimmer than the previous P.9000 caliber by nearly two millimeters. The automatic movement has a 4Hz frequency and features a new balance bridge which is secured at both ends, along with a twin barrel to give it its three day power reserve.

The steel PAM 682 Acciaio has a brushed, satin finish to its case, bezel and clasp which is echoed across on to the hands. It provides an excellent contrast in any lighting conditions, particularly against the matte dial, and is water resistant to 300m.

The rose gold, or Oro Rosso PAM 684, is only rated down to 100m (as if you would take it diving in the first place), is equally readable and has the added luxury of a ceramic bezel. As you would expect, the surround on both models is perfectly weighted and sounds great on its 60 click rotation. 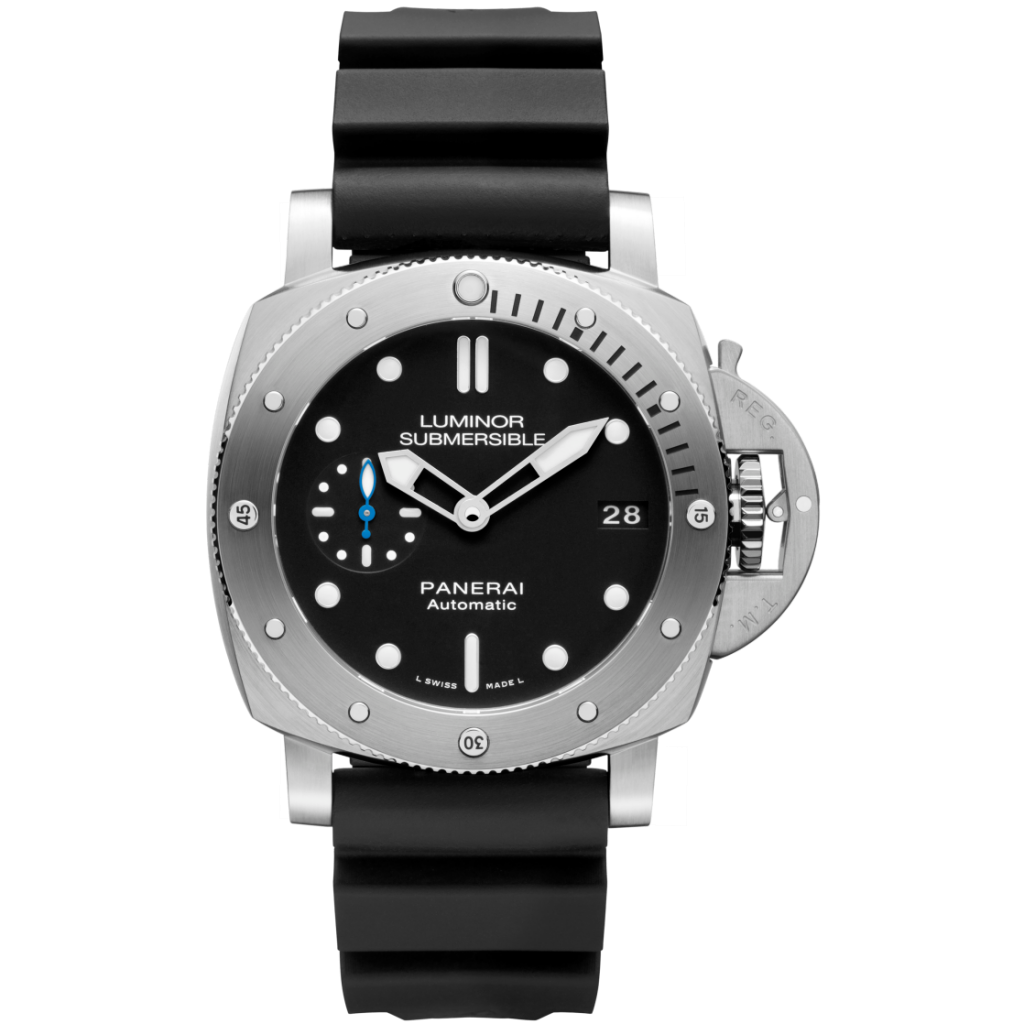 The dial on this watch is extremely readable, but chances are you’re never going to go diving with this thing

But will either find a home in the collection of the true dyed-in-the-wool Panerai fan? For many, it is the actual oversize-ness of the Panerai range which represents its USP. The two relatively petite new releases may well not be macho and rugged enough for the traditionalists. However, they offer a far more accessible option to the rest of us, the ones who have long admired that trademark shape from afar but have never had the wrist size to carry it off.

And one other element which remains the same is the ease with which the all-important Panerai bracelets can be changed. Both versions come supplied with a 22mm black Caoutchouc rubber strap, bellowed for diving and with a channel down the middle on the underside to help keep the air flowing in hot weather. But the Paneristi love nothing more than varying their look by fitting different straps, and the new Subs carry over the quick change feature from their larger stable mates. Pressing a tiny button under the lugs on each side, and using a pusher tool to nudge the bar out through the drilled lug holes, makes swapping out bracelets extremely quick and easy, without the risk of scratching the case. 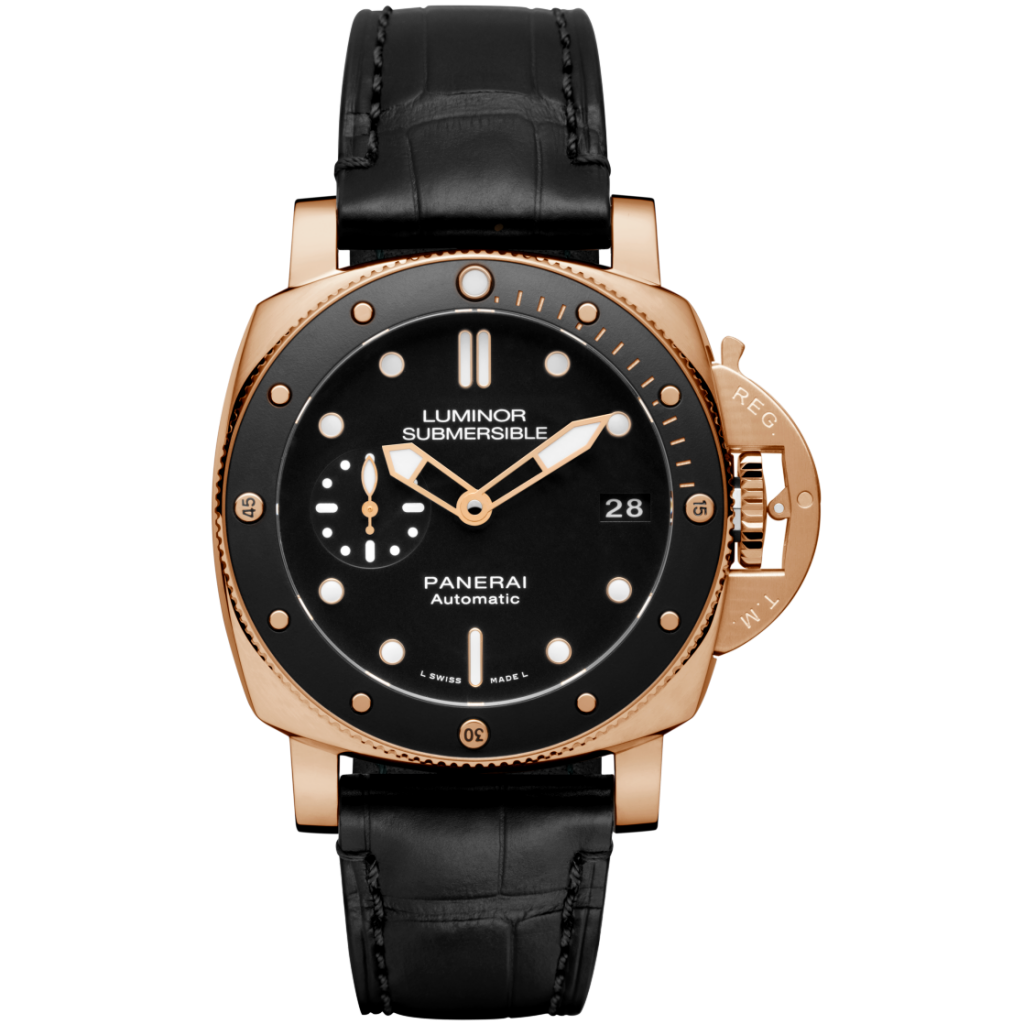 The 42mm Luminor Submersibles are niche versions of an already fairly niche watch from Panerai. At first glance it might seem a strange choice of model to release in this smaller size, but we wouldn’t be surprised if there was a spot of market research going on. If they find enough people digging the new look, expect to see some of the other greats in the catalog suddenly appear in more mainstream sizes.

One thing is for sure, both models remain reassuringly expensive. The steel PAM 682 retails at a Rolex Submariner-bating $8,700. Its red gold counterpart comes in at an eye-watering $26,700.

But for those who can afford them they make stunning statements, and you don’t need biceps like Rocky to lift them.