For true horology fans, there are few names that resonate quite so loudly as the Zenith El Primero. The overall winner of the race to create a self-winding chronograph movement, not because it was necessarily the first (we’ll be taking the lid off that particular can of worms a little later) but because, after the thick end of half a century, it’s still with us and as wonderfully impressive as ever. Watches produced by Zenith have been killing the game since Day 1. 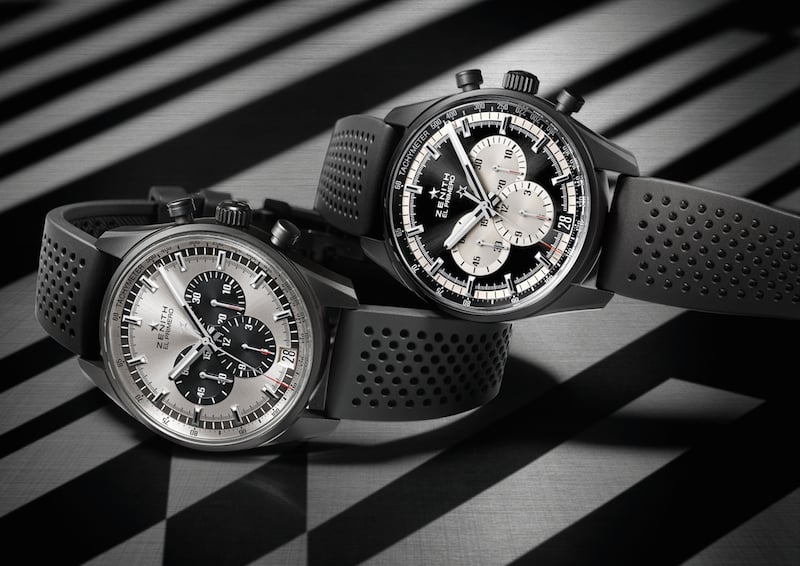 From their very first examples, chronographs have been one of, if not the, most popular types of complication in mechanical watchmaking. However, the enduring riddle of how to make an automatic caliber that could drive one had eluded the industry for decades. 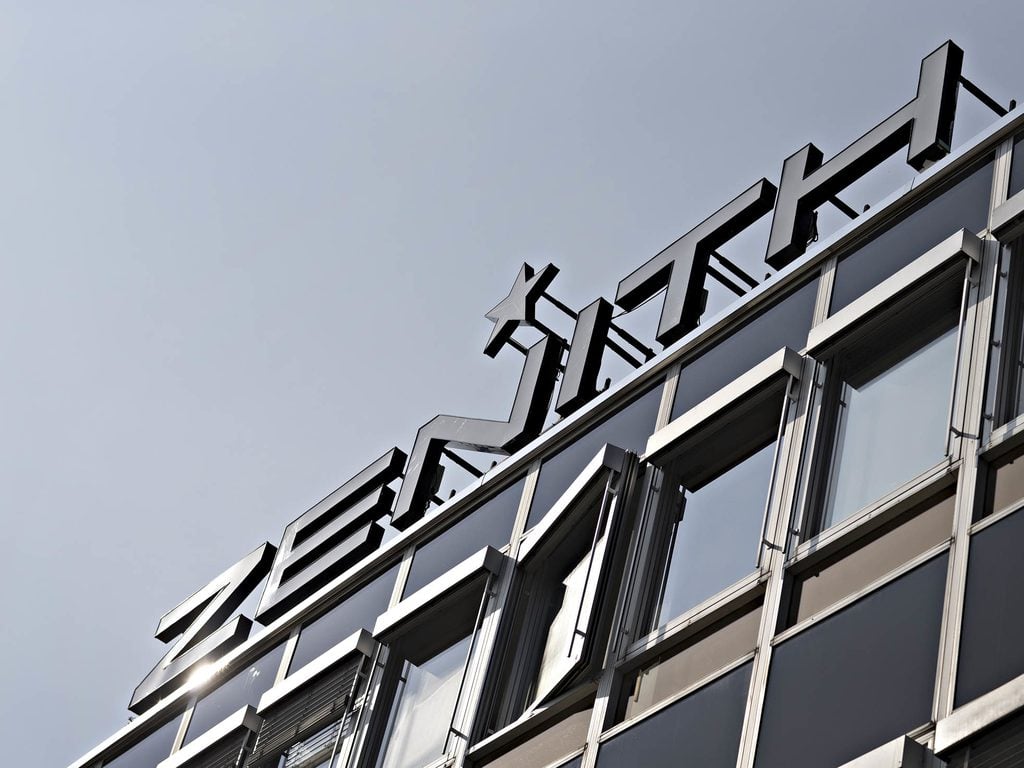 In 1962, Swiss manufacture Zenith started laying down the initial blueprints of their attempt to solve the problem, teaming up with fellow countrymen Movado.

The idea was to have it cracked by 1965, with ambitions to celebrate Zenith’s centenary that year by unveiling their new self-winding chronograph watch and astounding the world.

1965 passed with the world left distinctly un-astounded as the movement failed to materialize, as it also did in the four years that followed, the technical difficulties of the task eluding even the expertise of some of the finest engineers Switzerland had to offer.

To make matters worse, it had now turned into a competition. In Japan, Seiko had started work on their own mechanism, and just down the road from Zenith’s headquarters, a new alliance had formed called The Chronomatic Group, made up of Heuer, Breitling, Hamilton-Buren and Dubois Depraz, intent on beating both rivals to it.

In the end, all three released their breakthroughs in 1969.

The debate over who actually created the first automatic chronograph has gone on for a generation now.

In truth, Zenith announced theirs first, at a press conference in January of 1969. But the Zenith El Primero didn’t actually put in its debut appearance until that September. Seiko were the first to market with their take on the problem, the 6139, which launched in the May, while the Chronomatic Group became the first Swiss company to release an example when they unveiled the Caliber 11 in August. 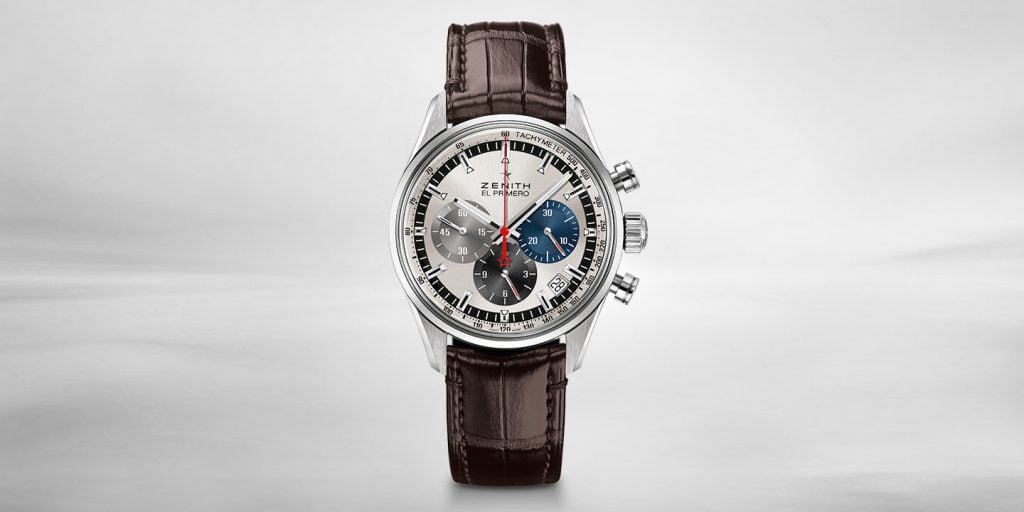 A homage of the original Chronograph from Zenith. (Credit: Zenith)

But although simple math would suggest the El Primero was actually the last to see the light of day out of the three players, an argument can be made that it beat them both, not least in functionality.

The Caliber 11 had been built in a hurry, and as such was not a fully integrated unit as the El Primero and 6139 were. Rather, it was basically an already existing automatic movement with a chronograph module bolted to the top. In addition, because it had been made so quickly, it was rife with problems since literally day one. At the NYC press conference on March 3rd announcing the arrival of the prototype Caliber 11, a draw was held with the prize b

The 6139 by comparison was an integrated, column wheel chronograph like the El Primero, but uneing one of the first watches containing this marvelous new contraption. By the end of the very same afternoon, the lucky winner had brought the watch back for repair after it stopped working. And it wasn’t a problem confined just to the earliest examples. The Caliber 11 was only in existence for a few short months before it received a major reworking to iron out its problems, rereleased as the Caliber 11-I.like it, it was not a high beat movement.

Zenith’s chrono, famously, has a frequency of 36,000vph, allowing it to measure time down to 1/10th second. To this day, it is the only mechanical caliber capable of it.

But whoever you decide won the battle, and a lot of it comes down to semantics anyway, the result was the same; the automatic chronograph was here. 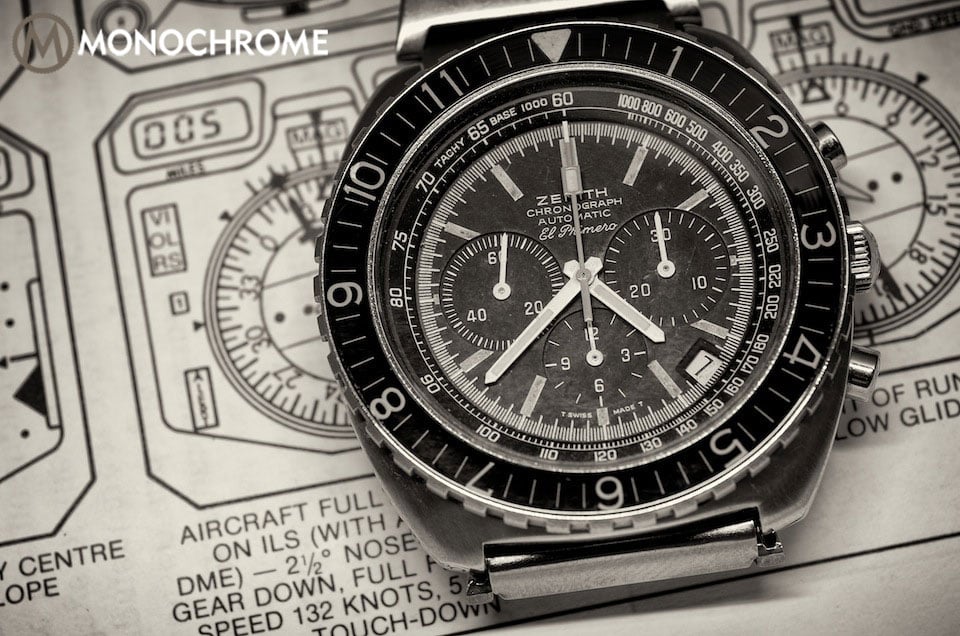 Sadly, it wasn’t here for long. Zenith had perfected two versions of their new baby; the 3019 PHC, with its trio of sub dials and a date function at three o’clock, and the 3019 PHF, which added a moonphase at the six o’clock. However, their release happened to coincide with the beginning of the darkest days for the mechanical watch industry, alternatively known as the quartz crisis. By the start of the seventies, that crisis had become a catastrophe, as wave after wave of cheap, disposable and impossibly accurate watches from Japan and the U.S. swamped the market, laying waste to the better part of two thirds of the traditional Swiss brands.

Zenith found itself nearly bankrupt, and was bought by the Zenith (no relation) Radio Corporation in Chicago in 1971. Responding to the demands of the time, ZRC management decided to concentrate their new charge’s efforts on making nothing but quartz watches, ordering all the machines and tooling from the mechanical side sold for scrap. Inexplicably, they also insisted on any and all documentation and manuals detailing how to build calibers such as the El Primero be burned.

That could well have been that for the movement, and some of the most important timepieces of recent years, had it not been for one disgruntled engineer.

When the orders came through from the ZRC executives to bin anything related to the Zenith El Primero, senior engineer Charles Vermot wrote to the company pleading for them to reconsider. With his protestations going unanswered, he was forced to take matters into his own hands, and he spent months secretly dismantling all the production equipment and storing it, along with the manuals, in the attic of the Zenith factory in Ponts-de-Martel. There it stayed hidden, Anne Frank-like, for nearly a decade.

By the end of the 70s, the worldwide love affair with quartz was beginning to turn frosty, and the public was starting to clamor again for the sort of horological masterpieces only Switzerland could supply.

Zenith returned to Swiss hands in 1978 and, thanks to Vermot’s diligence in saving and cataloging all the necessary components and detailing the entire manufacturing process, the El Primero was brought back into existence without the new proprietors being forced to massively reinvest in machinery.

In amongst the crates of equipment were a backlog of unassembled 3019 PHC movements, which Zenith sold to Ebel in 1981—so many in fact that they were able to stagger their distribution over the next three years.

It brought a much appreciated inpouring of funds into the company, but there was more, much more, to come. 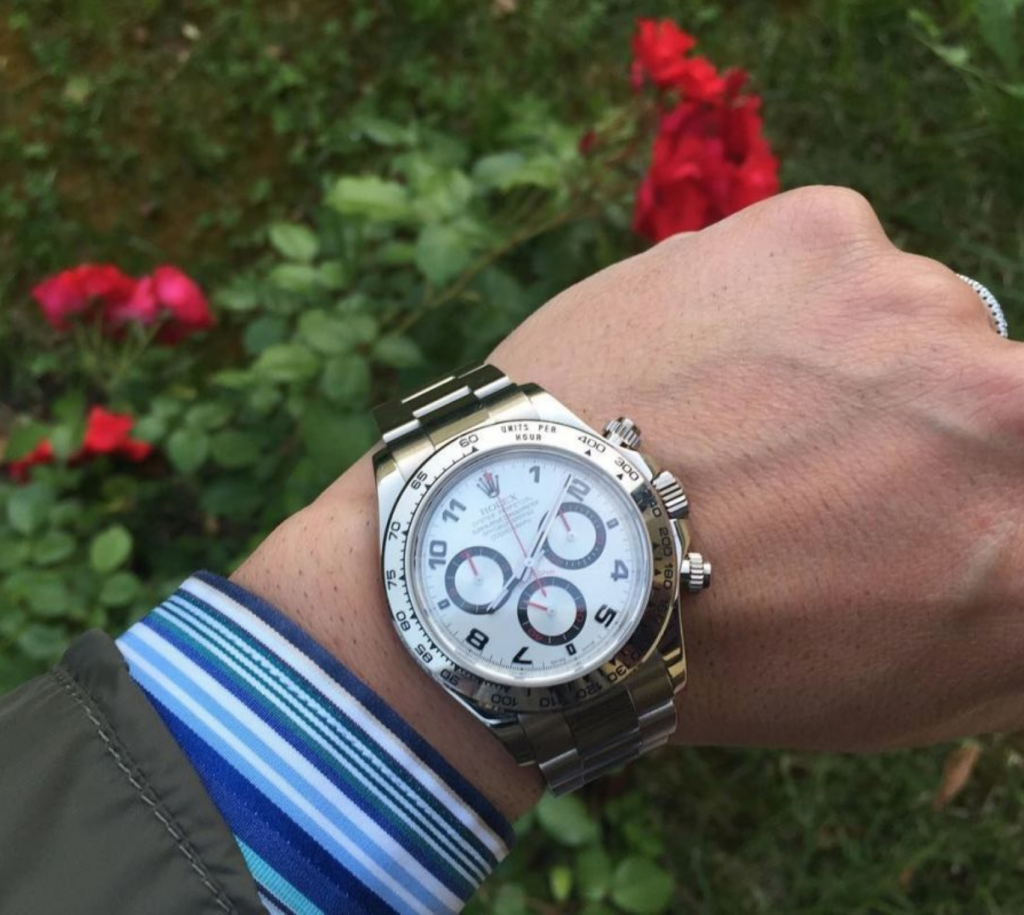 Rolex had persisted with the Daytona, their only chronograph, long after its sales figures would suggest they should admit defeat. The archetypal underperformer, by the mid-eighties rumors circulated that the dark horse was due an update, the most vital aspect being to discard its highly durable but inescapably manually-winding Valjoux caliber for the watch’s first automatic movement.

Fortunately, Zenith was waiting just the other side of the Alps, and with Vermot saving all 150 presses, cutting tools and plans for the Zenith El Primero, they were fully equipped to meet the needs of the watchmaking giant.

Rolex and Zenith signed a ten-year deal worth around seven million Swiss francs, with the first of the new movements delivered in 1986.

This being Rolex of course, it wasn’t quite as simple as that. The Zenith El Primero was thin enough to drop into an Oyster case, but before that could happen, it was stripped down to its bare plate and more than half the components were discarded and replaced with Rolex’s own. The date function was scrapped completely, and a new escapement with a larger, free-sprung balance wheel was added. Most significantly, the frenetic 36,000vph frequency was reduced to a more stately 28,800vph. It not only reduced wear and tear on parts and increased service intervals, it also brought the caliber, now called the Cal. 4030, in line with the rest of the brand’s line up.

In Baselworld 1988, the second generation of the Daytona emerged and…well, the model has since gone on to do ok for itself. 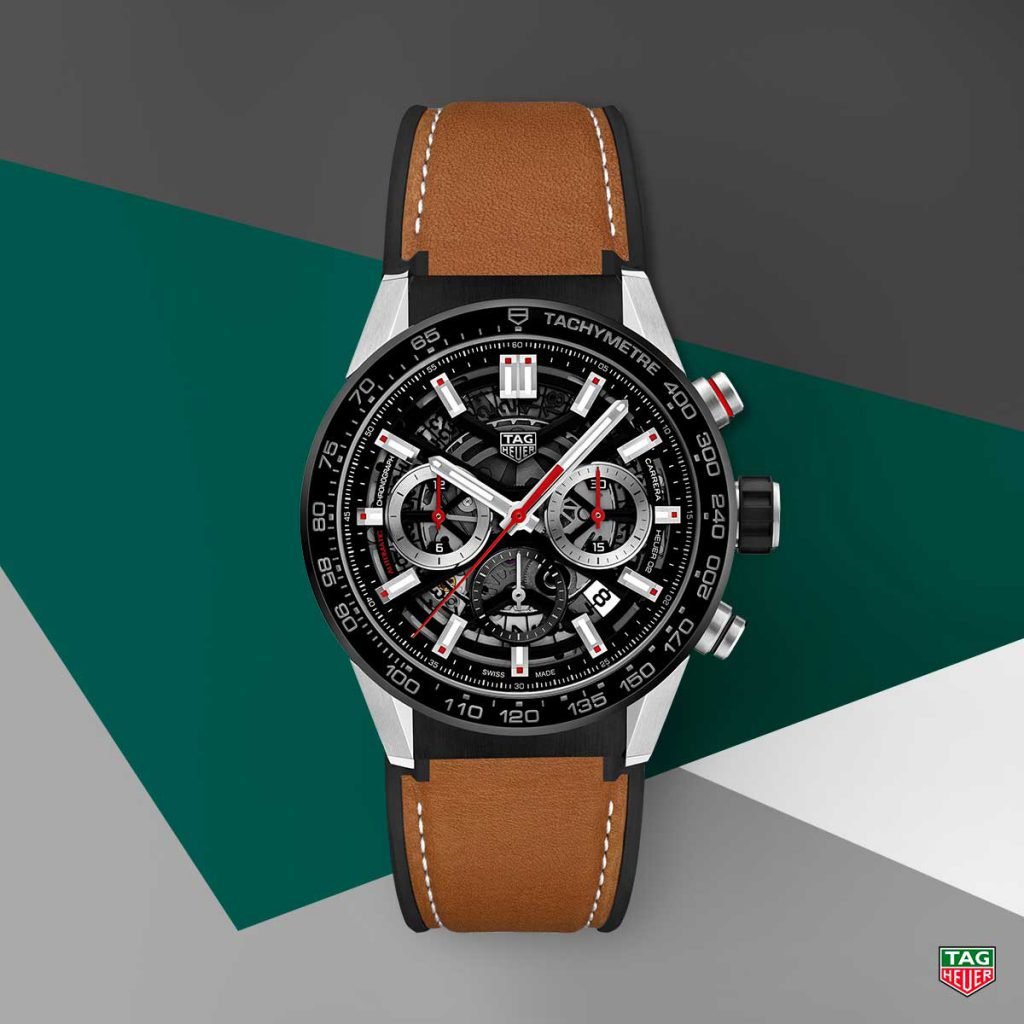 Tag Heuer, once a most fierce rival, is now part of the same watch group. (Credit: TAG Heuer)

Rolex’s Zenith Daytona may be the most high profile home to the El Primero, but there are a number of other famous names that play host. Alongside Ebel, brands such as Panerai, Bvlgari, Dunhill, and Daniel Roth have also taken advantage of its qualities. Ironically, TAG Heuer, once a fierce rival as part of the Chronomatic Group, have used it in their Carrera series. TAG and Zenith are now both part of the LVMH portfolio.

So far there have been 23 different versions of the Zenith El Primero, a record for any movement.

Of course, Zenith make their own eponymous collection powered by their brainchild, the watches taking an average of nine months each to build and requiring as many as 2,500 different operations.

At last year’s Baselworld they unveiled the Zenith Defy El Primero 21, with the latest modified version of the caliber, the 9004. Still beating at 36,000vph, the stopwatch functions get a separate movement of their own, racing at 360,000vph, so enabling the mechanical watch to measure times down to 1/100th second.

It is just another step in the El Primero story, a 44 year old saga that has given us possibly the first, but certainly the most enduring, automatic chronograph movement ever made.