In the world of vintage luxury watch collecting – and especially when it comes to vintage Rolex watches – the term “rare” can often be used excessively. There are some pieces, however, that can only be described as such, as not only have they rarely ever been seen but there are also few that have ever even heard of them. A perfect example of this is the Rolex Space-Dweller. The Space Dweller is so rare that few people have ever seen one in person and its story is not documented anywhere on the brand’s site like many other Rolex watches.

Rolex quietly introduced the Space-Dweller watch in the 1960s. However, it was not a production model but rather believed to be a rebranded Explorer 1016 watch test model – released exclusively in the Japanese market. Although the Space-Dweller did not prove popular enough to merit a full production run during its era, these days, it is one of the most elusive (and therefore collectible) vintage Rolex watches ever made. Learn more about this mysterious sixties-era vintage sports watch in our ultimate guide to the Rolex Space-Dweller.

Click here for a closer look at some of the most famous vintage Rolex watches.

– 1953: Rolex debuts the Explorer watch in honor of the ascent of Mount Everest.

– 1963: Rolex tests the Space-Dweller watch (a rebranded Explorer ref. 1016) in the Japanese market after the NASA goodwill tour.

The History of the Rolex Space-Dweller

The world has always had a fascination with explorers – pioneering spirits who venture into the unknown, paving the way for us lesser mortals to follow, taming the wilderness, and opening up new horizons. In times past, these intrepid souls have been celebrated in myths and legend, as trailblazers who took on the extremes of the earth for fame, glory, riches, or – in the case of Mt. Everest, simply “because it was there.”

Perhaps one of the last of the true heroes, the ones to fully encapsulate the pure essence of exploration, were the astronauts known as the Mercury 7. The crew of NASA’s Project Mercury included Alan Shepard (the first American in space and the first person to hit a golf ball on the moon) and John Glenn (the first American to orbit Earth). They were not only the best of the best, they were at the forefront of a new adventure, taking us, at long last, outside the final frontier.

In the early 1960s, during the darkest days of the Cold War, the daring exploits of this handful of super-humans earned them accolades and plaudits beyond those showered on any group before. The fiercely contested space race with the Soviet Union was too close to call and every victory for the Mercury crew gave hope that the balance of power would finally tilt in America’s favor. Following John Glenn’s historic mission – circling the planet three times in just under five hours – the group embarked on a global goodwill tour in 1963 where they were lauded as champions at every turn.

During their stop in Japan, the Japanese public met these astronauts with such enthusiasm that Rolex saw this as a potential opportunity. The Swiss watchmaker was, after all, in the business of commemorating legendary explorations such as the one of Sir Edmund Hillary and Tenzing Norgay reaching the summit of Mount Everest. In fact, the famed Rolex Explorer watch unveiled in 1953 was in honor of that historic feat. So, it would make perfect sense for Rolex to also release a watch as a tribute to the new space explorers. And they did, with the Rolex Space-Dweller in 1963.

Rather than going full steam ahead with a complete production run, Rolex took a cautious approach and released a test model in very limited quantities. Also, instead of a global launch, it is curiously believed that Rolex only released the Space-Dweller in Japan. Perhaps the thinking was that since the Japanese public was so enthusiastic about the astronauts, they would be equally as receptive to a Rolex watch named after the space explorers. 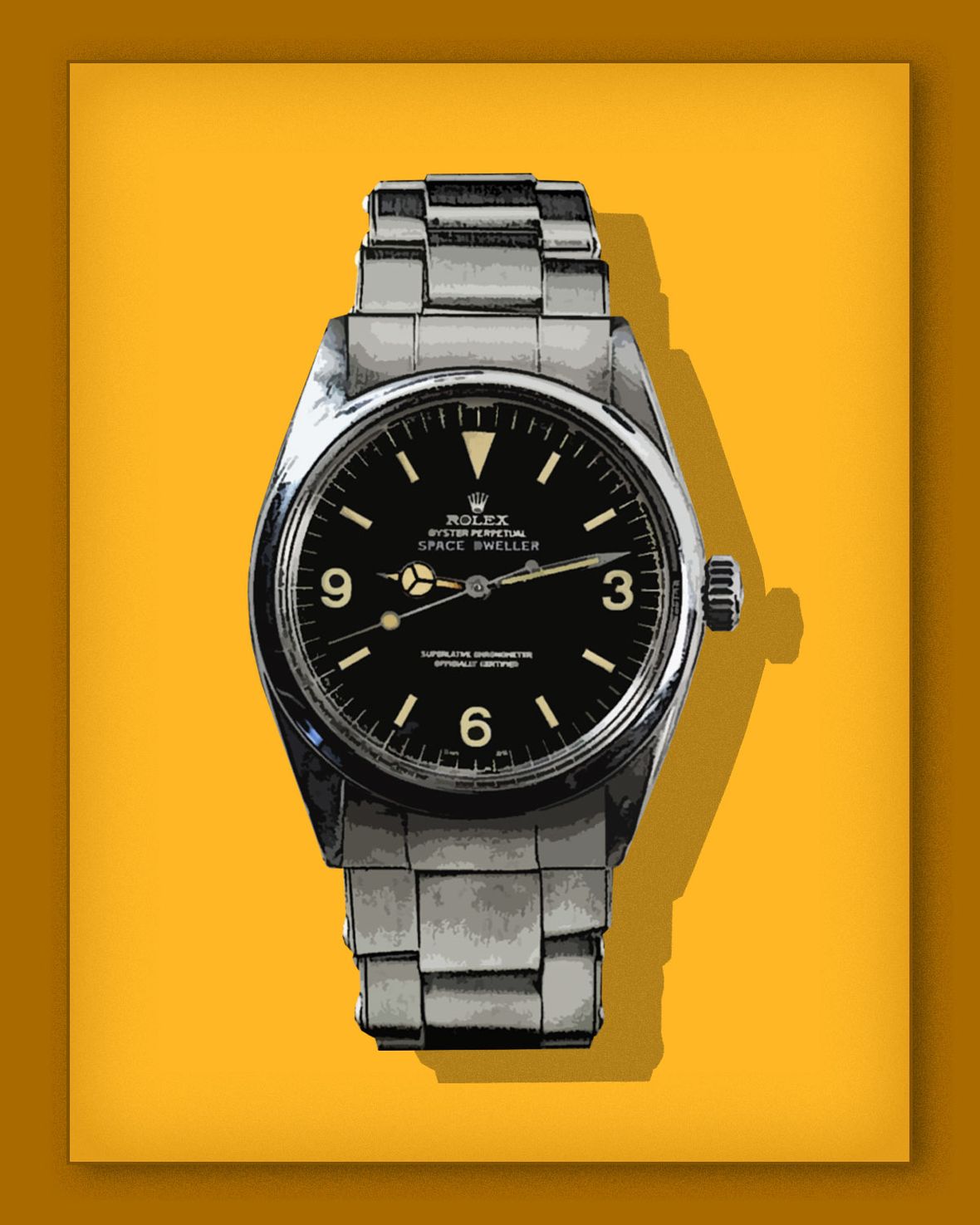 The Rolex Space-Dweller is actually an Explorer ref. 1016 outfitted with a special dial. However, the dial doesn’t include the name “Explorer” anywhere. Underneath the brand name and the obligatory “Oyster Perpetual” text where the “Explorer” tag usually sits is the “Space-Dweller” name.

The rest of the watch, from its 36mm dimensions to its trademark 3/6/9 numerals is identical to the standard Explorer 1016 – one of the most handsomely elegant and (irony of ironies) down-to-earth models Rolex has ever produced. Inside the case is the time-only Caliber 1560/1570 automatic movement.

The Rolex Space-Dweller was produced in tiny numbers and sold, as a trial only, exclusively in Japan. While the returning heroes of the Mercury missions had been greeted like rock stars in the country, the watch designed to capitalize on their achievements failed to land decisively with the Japanese public, and sales were muted. Since the Rolex Space-Dweller never took off, the idea was abandoned only a few years after its debut.

Had the model captured the imagination in the same way as Mercury-mania clearly had, Rolex was prepared to put the rebranded Explorer into production. As it was, the Space-Dweller was retired before it even began, leaving us with one of those pieces that re-define the word “rare.” The lack of popularity may have been unfortunate for Rolex but for today’s vintage collectors, this means that the Space-Dweller is one ultra-rare model to seek out.

Value of the Rolex Space-Dweller

It’s estimated that Rolex only ever made a few dozen Space-Dweller branded Explorer 1016 watches during the mid-1960s. Therefore, spotting a Space-Dweller in the wild is about as likely as you being able to convince the world that the moon is made of cheese. The most hardcore Rolex collectors can go their entire life without catching even a glimpse of one, and on the special occasions an example does come up for sale, the price is often astronomical.

Since there are so few examples of the Rolex Space-Dweller out there, they hardly ever come up for auction. However, there have been some notable sales of the elusive model from top auction houses. In May 2002, a Space-Dweller sold for a mere $13,617. That may seem like a paltry amount today, but it did exceed its initial high estimate of $6,400.

For those few individuals lucky enough to own a Space-Dweller, they are the holders of a truly rare and fascinating piece of Rolex history – a watch built originally to hail the mightiest of earth-bound achievements, reworked to celebrate our first tentative steps into the limitless realms of space exploration.