The 1950s was a vital decade for Rolex. It was the era where the brand doubled-down on the concept of the tool watch, bringing us models such as the Rolex Submariner for scuba divers exploring the ocean depths, the GMT-Master for transatlantic pilots crossing different time zones, and the Milgauss for scientists and engineers working in proximity of strong electromagnetic fields.

But the series that most readily springs to mind when you think of Rolex in the 1950s will always be the Submariner. Launched in 1953, by the end of the decade it was already onto its ninth reference, with several of the earliest models having overlapping production runs, sometimes lasting for less than a year and yielding tiny quantities. It was a period of relentless testing, evaluating, and incremental evolutionary steps, with upgrades both minimal and major, all in Rolex’s pursuit of creating the ultimate dive watch.

By 1959, the net result of those turbulent formative years was a version of the Submariner div watch that had come of age. The Rolex Submariner 5512 was built on the backs of its predecessors, a watch that retained all the elements that worked, discarded those that didn’t, and introduced the definitive shape and design language for every subsequent iteration. Below, we’ll take a look at just what makes the reference 5512 so special. 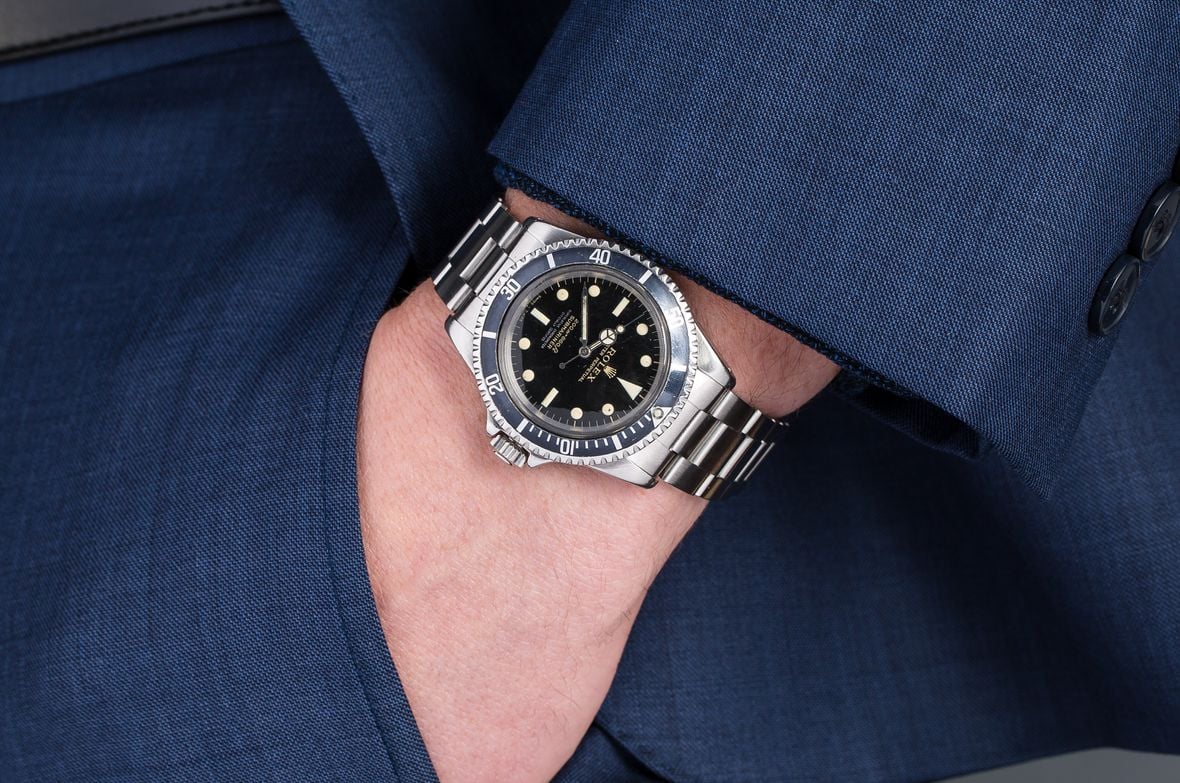 Although it was by no means the very first Submariner that Rolex ever produced, many collectors regard the reference 5512 a the point in the history of Rolex’s iconic dive watch where it first started to take on what would ultimately become its present-day form. Produced from 1959 until approximately 1979, the Rolex Submariner ref. 5512 brought about several notable changes to the brand’s famous dive watch family. For instance, it grew in size to 40mm from the 38mm case diameter of previous models, and it also introduced crown guards to the collection for the very first time.

Despite being such an important model from the Submariner’s history, Rolex is always moving forward and improving upon its designs and the refernece 5512 was produced with a number of differnet variations during the span of its two-decade production run. Like most vintage Rolex watches, the Submariner ref. 5512 evolved over time, and it is this subtle variation that makes it such an exciting model for today’s collectors. Let’s have a look at what these differences are and what influence they have on the value of a vintage Submariner ref. 5512. 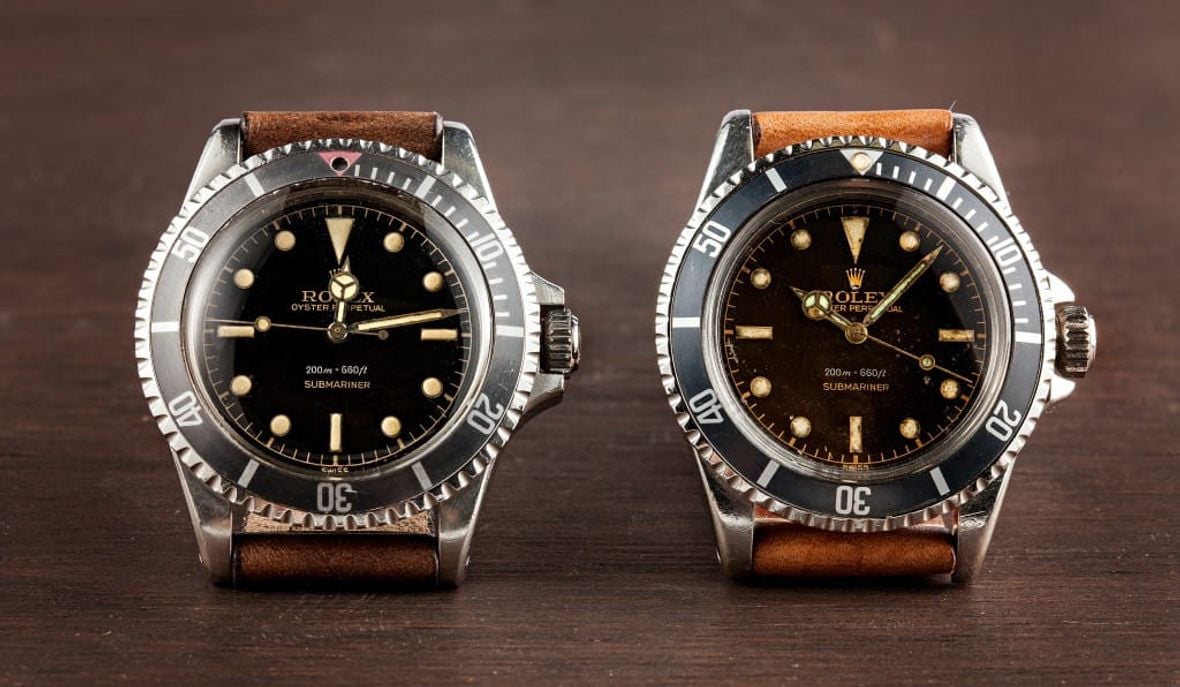 Even though it was a leap forward in terms of design, the of the ref. 5512 still wasn’t quite yet perfected when it was launched. The most obvious key difference between it and its forerunners was the addition of crown guards, protective shoulders around the winding crown to insulate it against shocks and accidental unscrewing – a logical and welcome addition for a tool watch meant to accompany explorers on their underwater adventures.

Depending on the production year, there are three distinct types of crown guards found on the Submariner ref. 5512. The square shape of the guards on the very first wave of the Submariner 5512 blocked the crown so much that it made it difficult to operate. They were quickly changed to a more pointed style; however it seems that the surplus stock of those original cases were shipped across to its sister company Tudor, who used them on its own Submariner, the ref. 7928. About five years after the introduction of the pointed crown guards, Rolex switched the crown guard silhouette yet again, to a more rounded shape, which became the standard shape throughout the remainder of the Submariner ref. 5512’s production run.

In terms of value, because the square crown guards (SCG) were in production for such a short amount of time and are therefore exceedingly rare, these are the most valuable Submariner ref. 5512 models on the vintage market. Additionally, due to their early place within the ref. 5512’s history, all examples would have originally been fitted with glossy gilt dials. In fact, Christie’s sold a ref. 5512 with square crown guards in 2013 for about $207,000! 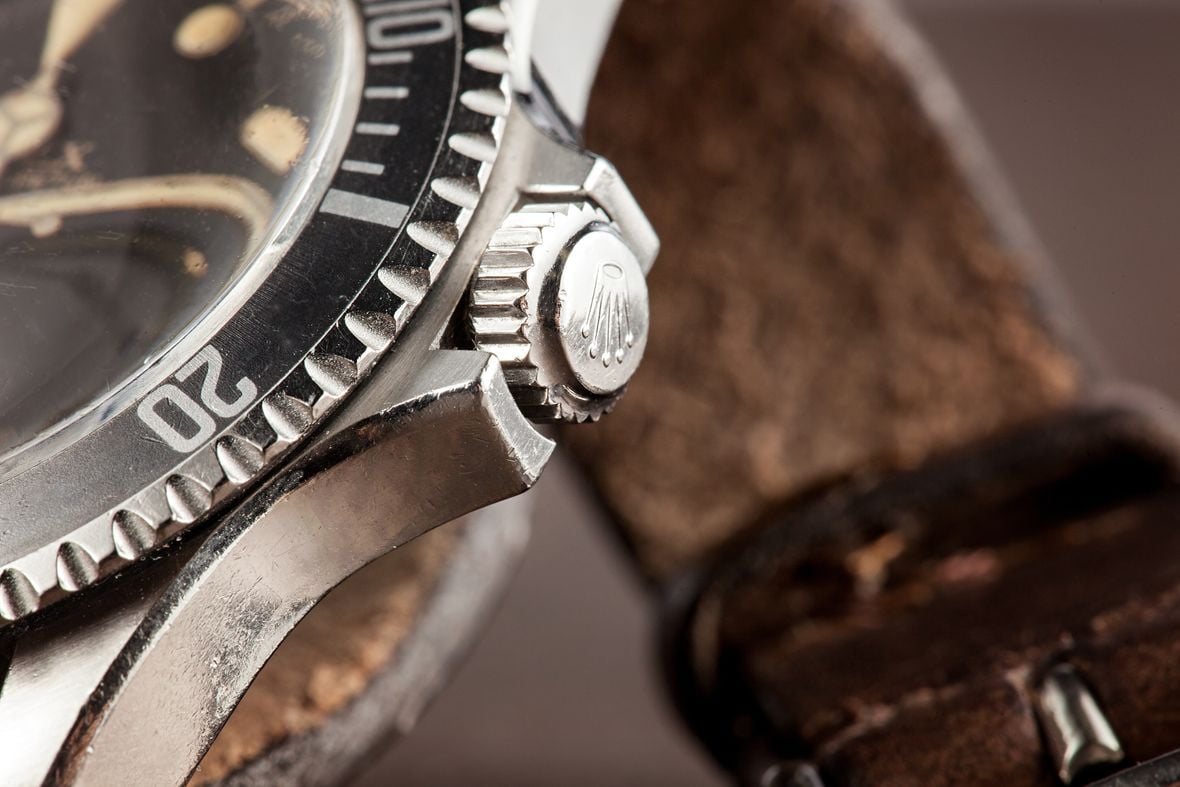 As with any vintage Rolex watch, the tiniest change on the dial or bezel can lead to incredible premiums being added to their present-day value. Without diving into the bottomless minutiae of every different type of font serif, text alignment, chapter ring, or depth rating marking, there are two main generations of ref. 5512 dials, and even that is confusing enough for most collectors.

While all Rolex Submariner ref. 5512 watches came equipped with black dials, there are two main versions. The earlier editions came with glossy black dials with gilt (gold) text up until about 1967. Rolex then replaced this style of dial with matte black dials with white printing. As expected, those Submariner ref. 5512 watches with glossy gilt dials typically command higher prices than those with matte black dials and white printing. Similar to the GMT-Master collection, there are also two versions of the glossy/gilt dials found on the Submariner 5512 – ones with a chapter ring (early examples) and those without a chapter ring that came later before gilt dials were phased out completely and replaced with matte dials. 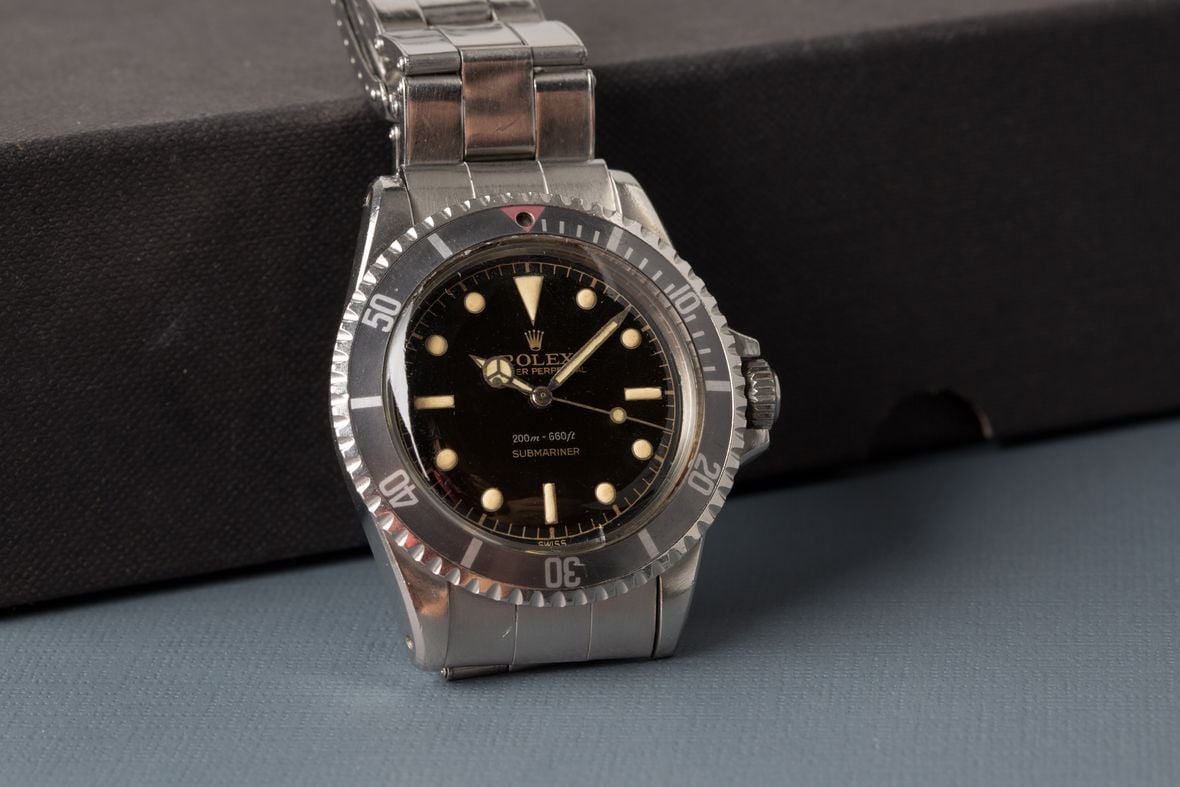 The very earliest examples of the Rolex Submariner ref. 5512 were fitted with the brand’s own Cal. 1530, a sturdy workhorse of a movement, but one that was not (generally speaking) chronometer-certified. To gain the certification, the movement would have to pass the stringent trials of the COSC – better known as the Official Swiss Chronometer Testing Institute. Only those capable of being accurate to within +4/-6 seconds a day could bear the label “SUPERLATIVE CHRONOMETER OFFICIALLY CERTIFIED” on their dials.

With those early models of the ref. 5512 not submitted for testing, the only dial text they had other than ‘Rolex’ and ‘Oyster Perpetual’ was the Submariner name and the depth rating. These ultra-rare pieces are known as 2-line Submariner 5512 watches and they are today among the most collectible examples of the reference 5512.

The Cal. 1530 was very quickly replaced with the chronometer certified Cal. 1560 and a little later by the Cal. 1570, which enabled Rolex to include the extra chronometer-certified wording, creating 4-line Submariner 5512 watches. While all 2-line Submariner 5512 models have glossy gilt dials, depending on the year, 4-line versions can either come with glossy gilt dials or matte dials with white printing. Due to their age and rarity, 2-line Submariner ref. 5512 versions are typically more expensive than their 4-line counterparts.

With that in mind, 1962 marked the arrival of the ref. 5513 Submariner, which was largely identical to the reference 5512 but lacked a chronometer-rated movement, and thus occupied a more affordable price point. The reference 5513 is considerably more plentiful than the reference 5512 and also enjoyed a longer production run. Why this is important is because to the untrained eye, an early example of the ref. 5513 can look almost indistinguishable from the extremely scarce and highly valuable 2-line Submariner 5512, so it always pay to check the reference number engraving if you are not positive about which vintage Submariner model you might have. 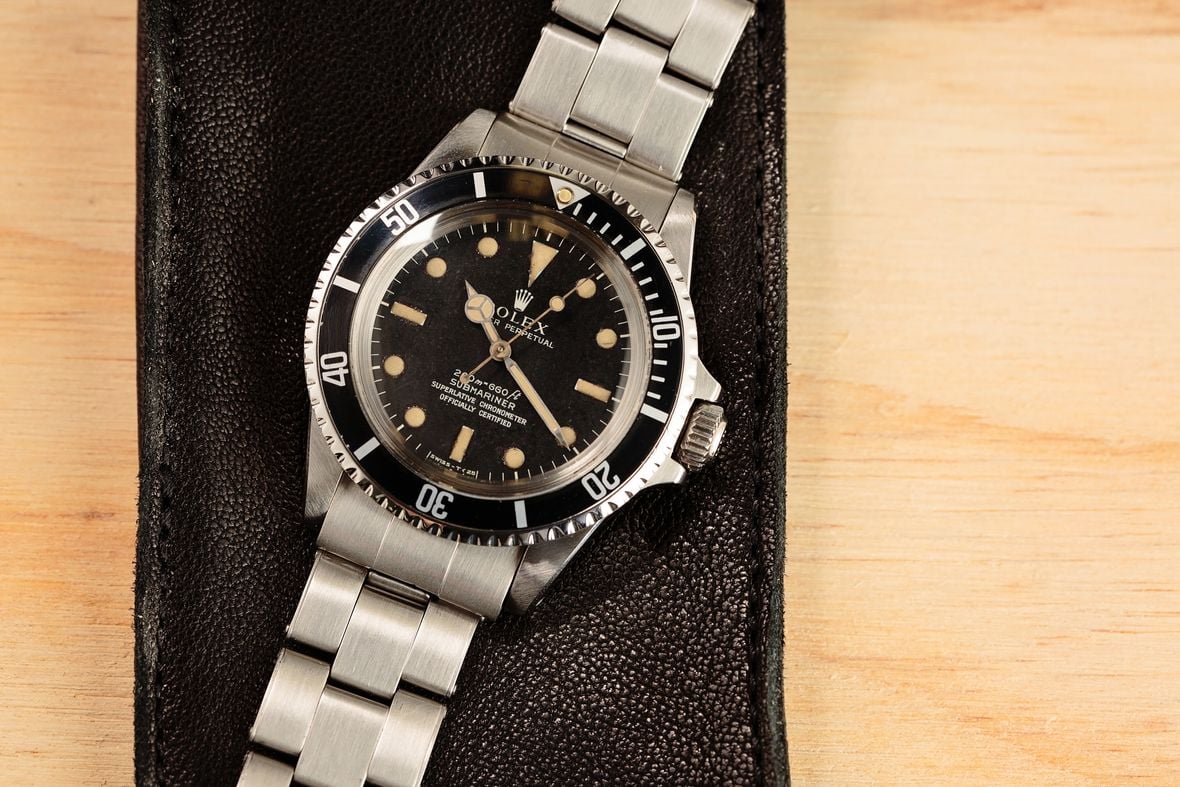 A closer look at different dials of the vintage Rolex Submariner ref. 5512 reveals that Rolex changed up the placement of the depth rating. Early editions – and this includes all of the early gloss/gilt examples included the meters units first where the dials indicate “200m = 660ft” for their depth ratings. Rolex later switched it up to have the feet units rating first where the dials read “660ft = 200m” – a practice that continued until the end of the reference 5512’s production run at the end of the 1970s.

As a result of this practice, there are both two-line and four-line versions of the meters-first Submariner 5512, but none of the early examples with glossy gilt dials have feet-first depth ratings. As you might be able to guess, meters first versions came first and were in production for a shorter amount of time and today, they are often more expensive and desirable than the later feet-first editions. 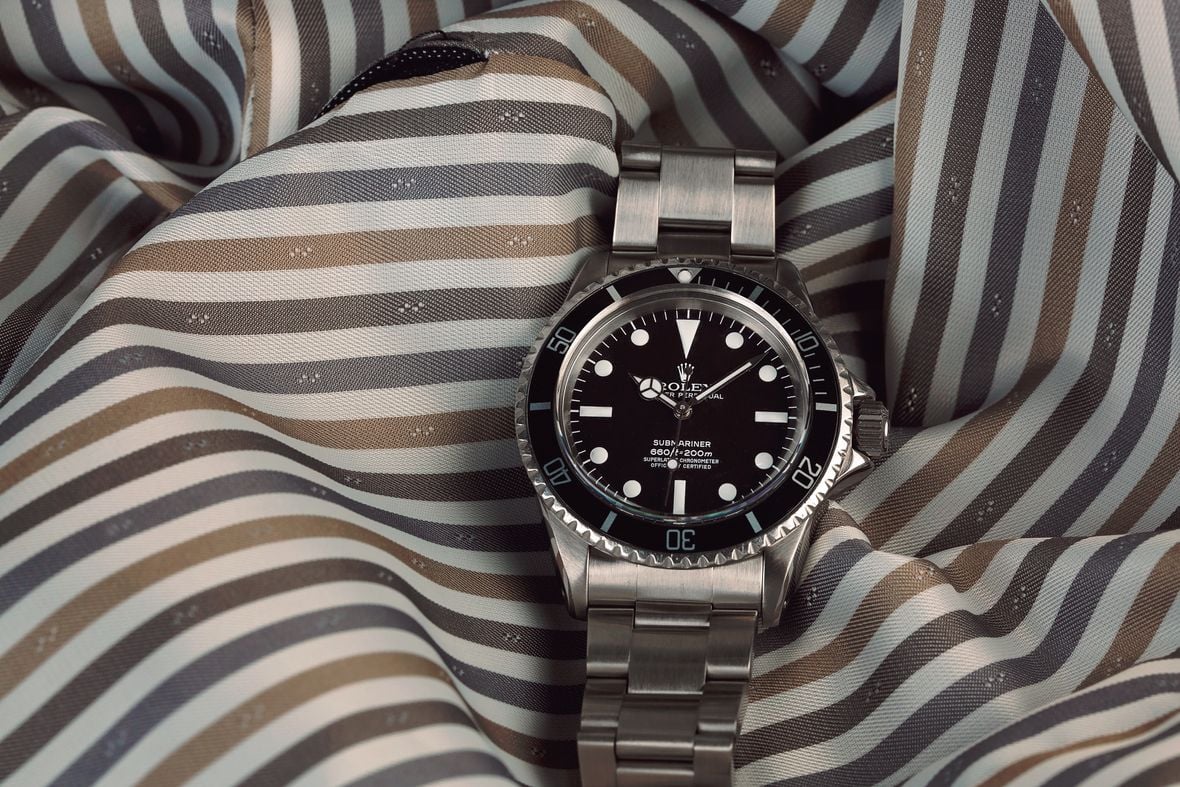 The change in placement of the SUBMARINER text only came about in the mid-1970s, but the service replacement dials that were produced for the reference 5512 featured the SUBMARINER name above the depth rating. Consequently, it is not uncommon to see older ref. 5512 watches with later-era style dials, and this is typically a good indicator that the dial was replaced at some point during the watch’s history. 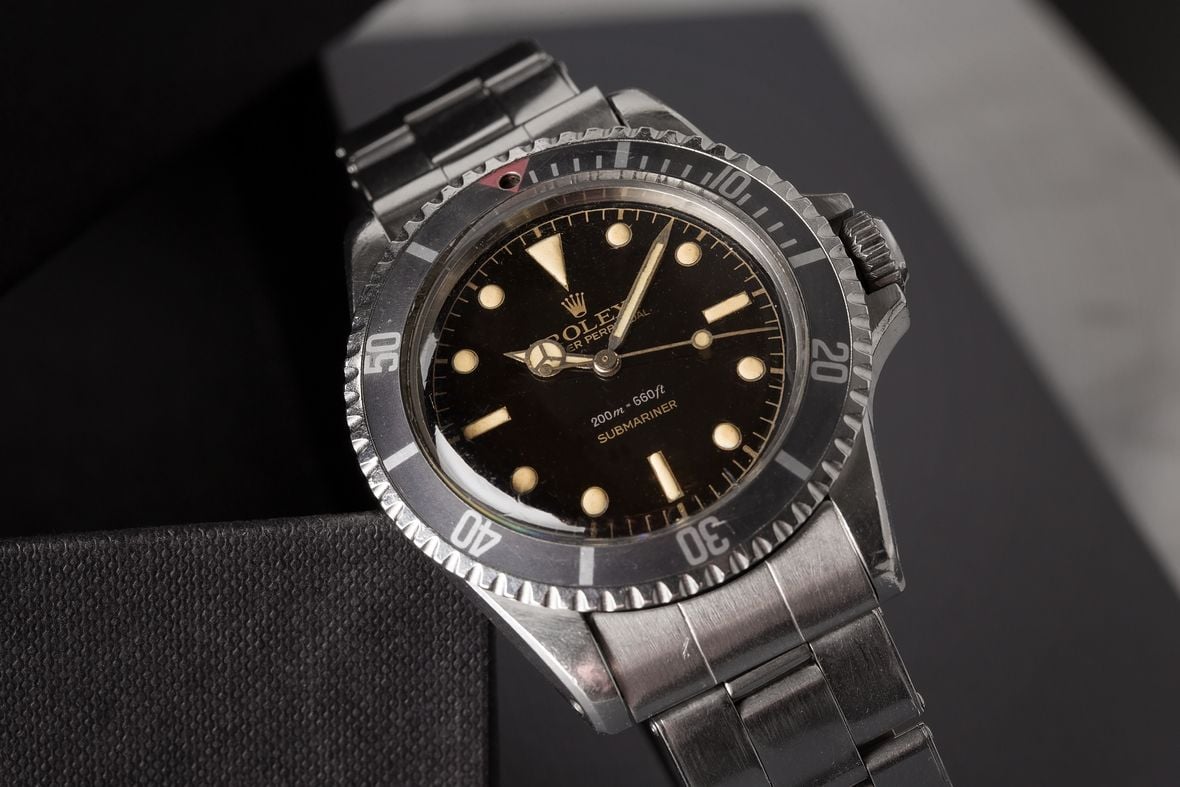 Universally adored in vintage collector circles, the ref. 5512 is thought of as one of the last ‘pure’ Submariner references and it is a rare beast with a number of even rarer variants dotted throughout its 20-year lifetime. While finding a worthy pre-owned example is becoming an increasingly difficult and expensive task, the Rolex Submariner reference 5512 represents one of the most rock-solid investments in the world of horology. Despite typically being less expensive than its older pre-crownguard siblings, many collectors believe that the reference 5512 is the perfect example of the quintessential vintage Submariner.

It’s interesting to note that the Submariner ref. 5512 was actually the Rolex watch of choice for legendary Hollywood actor Steve McQueen, despite the fact that the Explorer II ref. 1655 is (erroneously) nicknamed the “Steve McQueen” by today’s collecrtors. In fact, McQueen’s very own personal Submariner ref. 5512 sold at auction in 2009 for $234,000 – although we’re certain it would fetch much more than that today given the continuously growing vintage Rolex market.

While a quarter of a million dollars is certainly at the top of the price range for a Submariner ref. 5512, the value of this particular vintage Rolex watch model has risen steadily over the years. Depending on provenance, condition, and the specific variation, the price of Submariner ref. 5512 watches normally range from about $17,500 to just shy of $100,000. With that in mind, a rare “Explorer-style” dial variant sold for approximately $250,000 in October 2020, which further supports the notion that Steve McQueen’s personal Rolex Submariner 5512 would fetch well beyond the quarter million dollar mark if it were to be auctioned again today.

It is incredibly important to remember that the reference 5512 is substantially less common than its non-chronometer sibling reference, the Submariner ref. 5513. Some estimates say that Rolex manufactured five times more Submariner 5513 watches than ref. 5512 watches during the years that these models remained in production. What is certain is that the Submariner ref. 5512 is a milestone Rolex model that introduced crown guards and a larger 40mm case size to the brand’s iconic dive watch family. 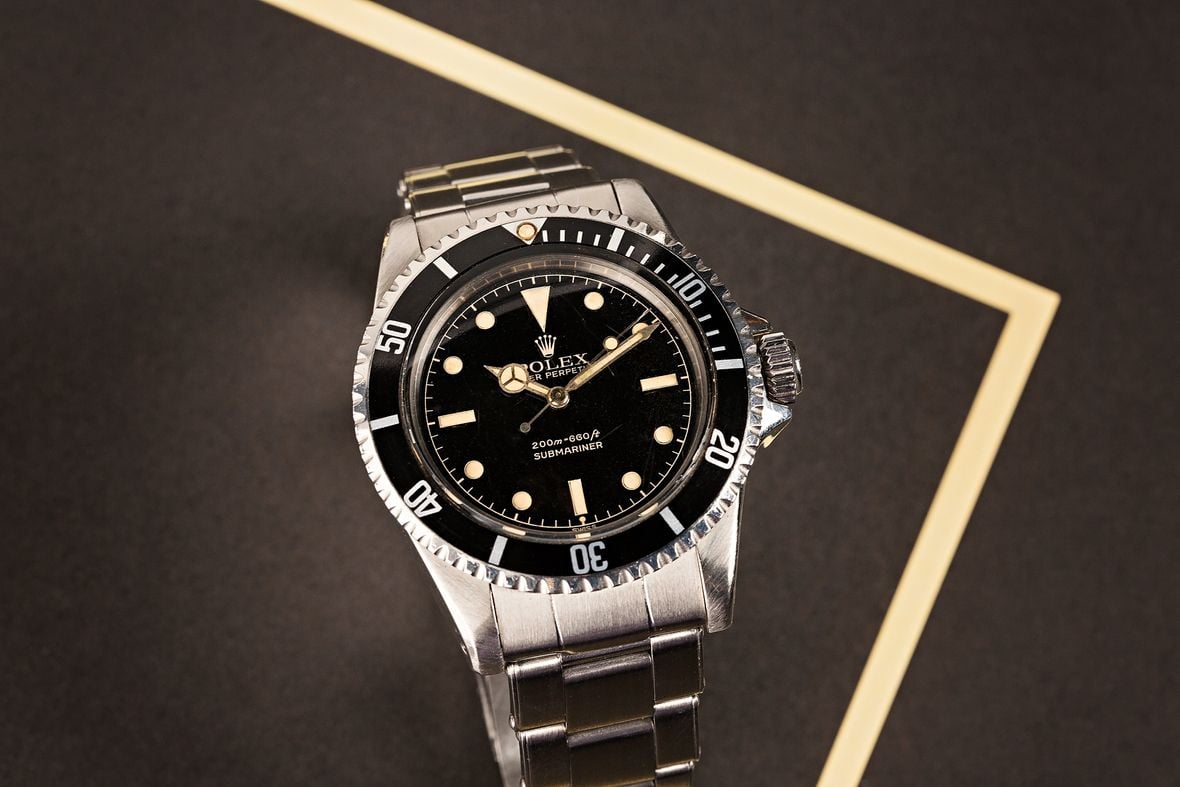 Arguably more than any other model from the brand’s legendary portfolio, it is the Rolex Submariner that is the model that first comes to mind when people think of Rolex. The Datejust is the brand’s best-selling collection and it truly is the quintessential Rolex timepiece; however, it is the Submariner that is emblematic of Rolex’s illustrious tool-watch legacy, something that has become one of the core pillars of the brand’s present-day identity.

While it was not the very first Submariner that Rolex ever produced, the reference 5512 was the model that first established the blueprint for the sports watch icon as we know it today. The watch’s no-date simplicity and minimalist layout are the true essence of the Rolex brand – tough, honest, and elegant. The Rolex Submariner is the most counterfeited timepiece in the world and the most emulated design in history. Not only are there more fake versions in circulation than the real thing, other highly-respected manufacturers have even adopted its styling cues and for many collectors, the Rolex Submariner will always be the archetype of the modern diver’s watch.

What do you think of the vintage Rolex Submariner 5512? Let us know in the comments section below! 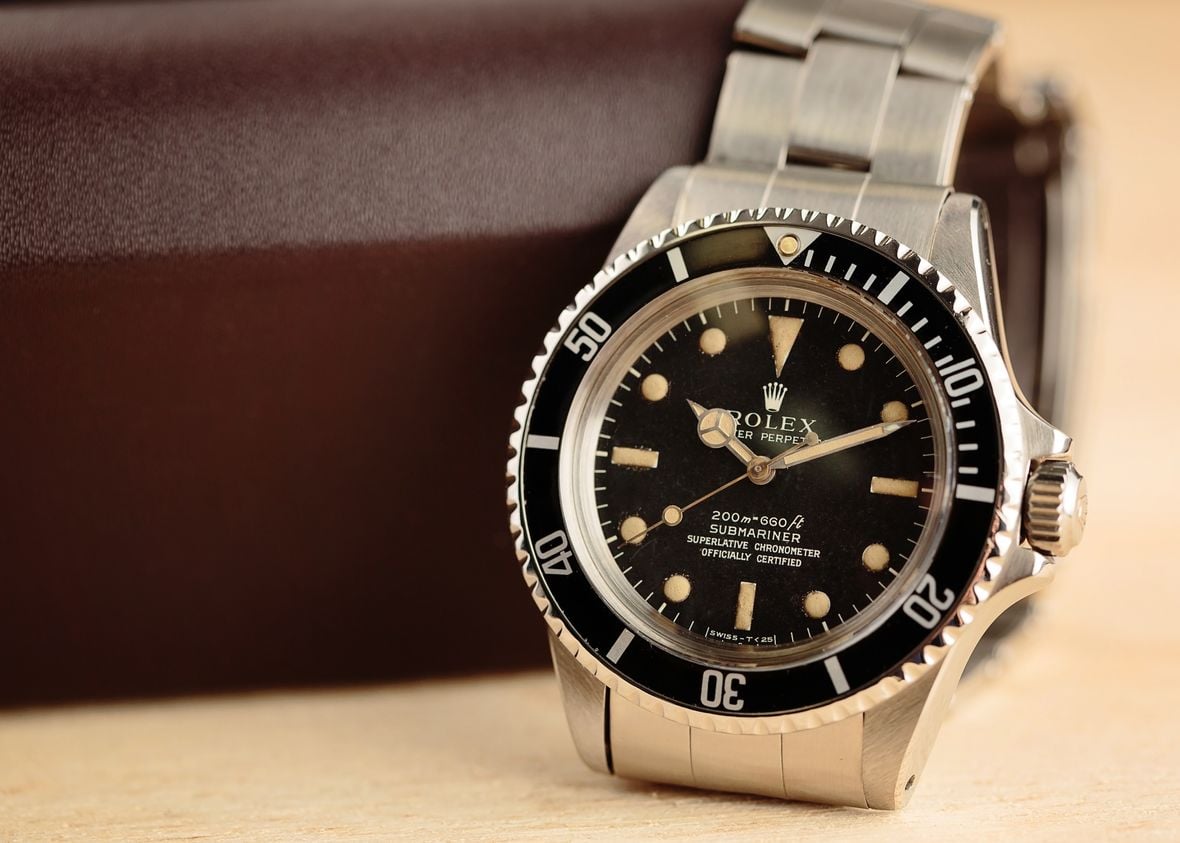