For the first ten years of its existence, the Rolex Sea-Dweller was manufactured with both the “Sea-Dweller” and “Submariner 2000” names printed in red text on the surface of the dial. However in 1977, Rolex released a new Sea-Dweller – still under the 1665-reference number, that abandoned the red lines of text, along with the Submariner name, in favor of an entirely black and white dial. 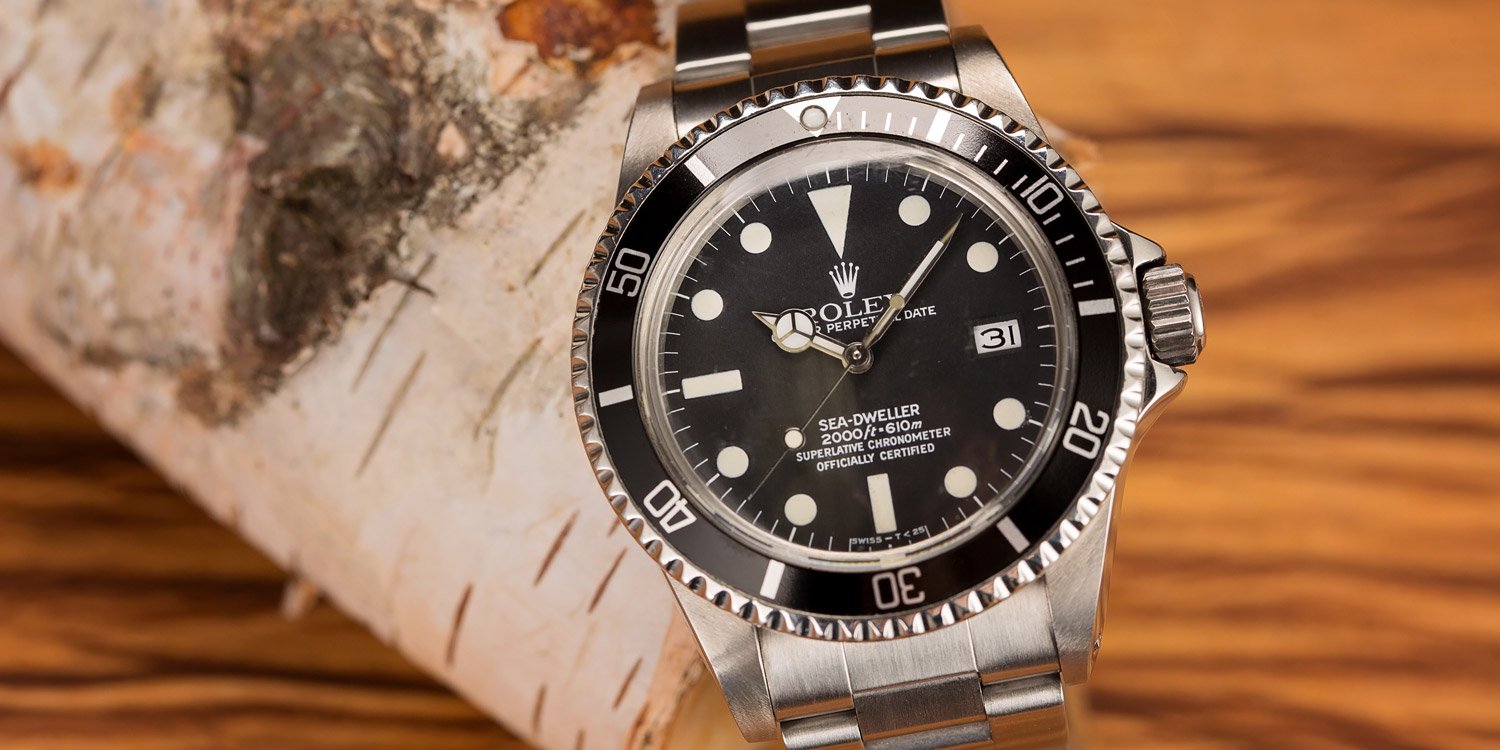 A Few Things about the Sea-Dweller Great White

Due to the monochromatic text of the dial of the new reference 1665 Sea-Dweller, the watch earned the nickname the “Great White” among Rolex collectors, as a means to help distinguish it from the earlier reference 1665 Sea-Dweller watches that featured red text on the surface of their dials. Additionally, this change to an entirely black and white dial for the Sea-Dweller would be a lasting decision that would stand for forty years, until the release of the reference 126600 Sea-Dweller at Baselworld 2017. 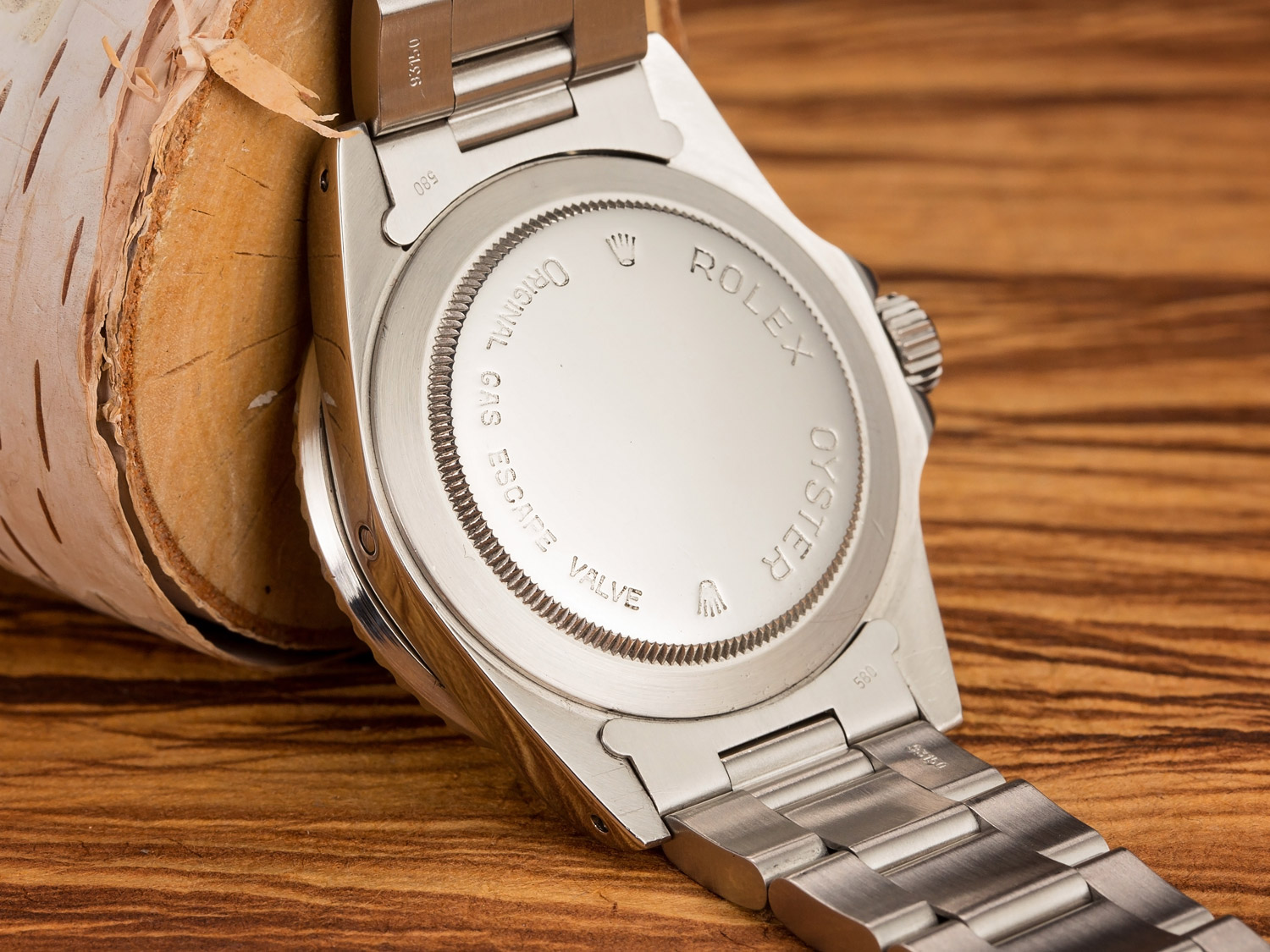 The caseback of the watch reads “Rolex Oyster” and “Original Gas Escape Valve”.

To accompany the updated dial of the “Great White” Sea-Dweller, the case-backs on the new generation of reference 1665 watches received slightly more refined engravings, in which the Rolex name curves along the arc of the fluting, rather than appearing in a straight line. Beyond the subtle updates to the dial and case-back, the new generation of reference 1665 watches was very much like the previous ones that had featured red text; however what the updates on the “Great White” represented was far more important than the actual changes to the watch themselves. 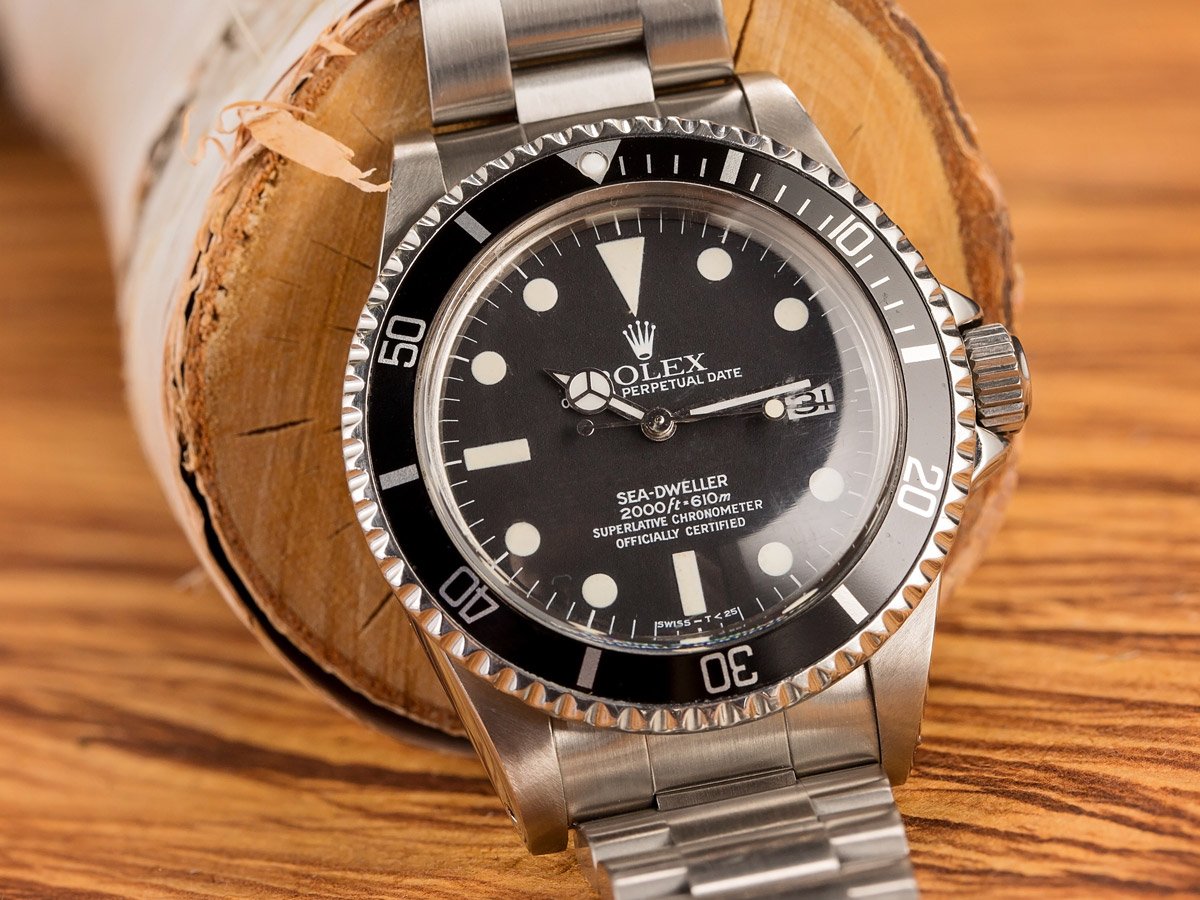 The Sea-Dweller was made from a Submariner.

Born from a Submariner 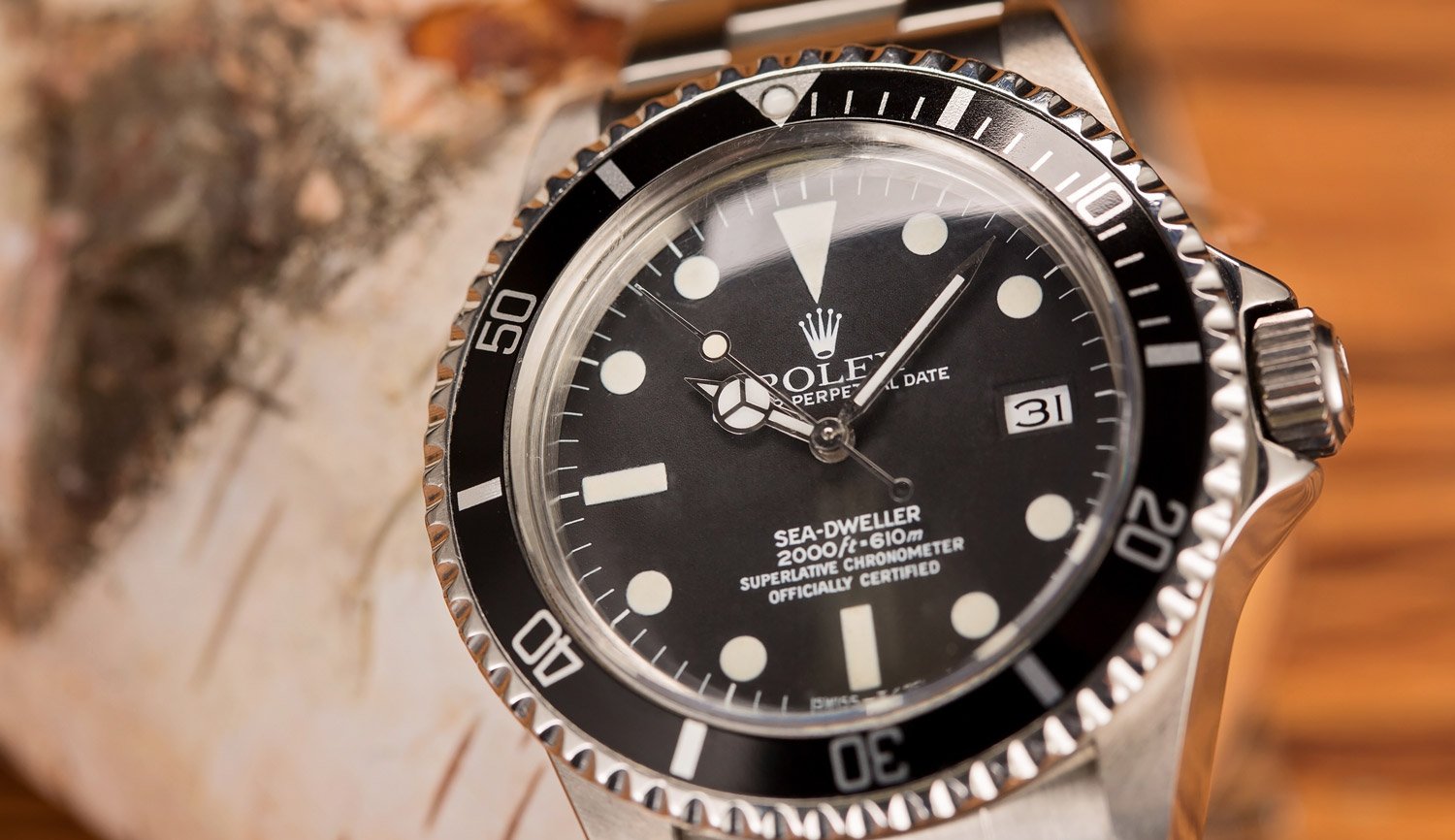 On the Double Red Sea-Dweller, the dial had both “Submariner” and “Sea-Dweller” causing confusion.

Although the elimination of red lettering made for a rather noticeable visual change, the removal of the Submariner name was the most important change that accompanied the arrival of the “Great White” reference 1665. Without the Submariner name appearing on the dial, it was an obvious signal to the public that Rolex intended the Sea-Dweller to be its own line of watches, separate from the Submariner, and filling a slightly different niche within their lineup of highly competent, professional watches. 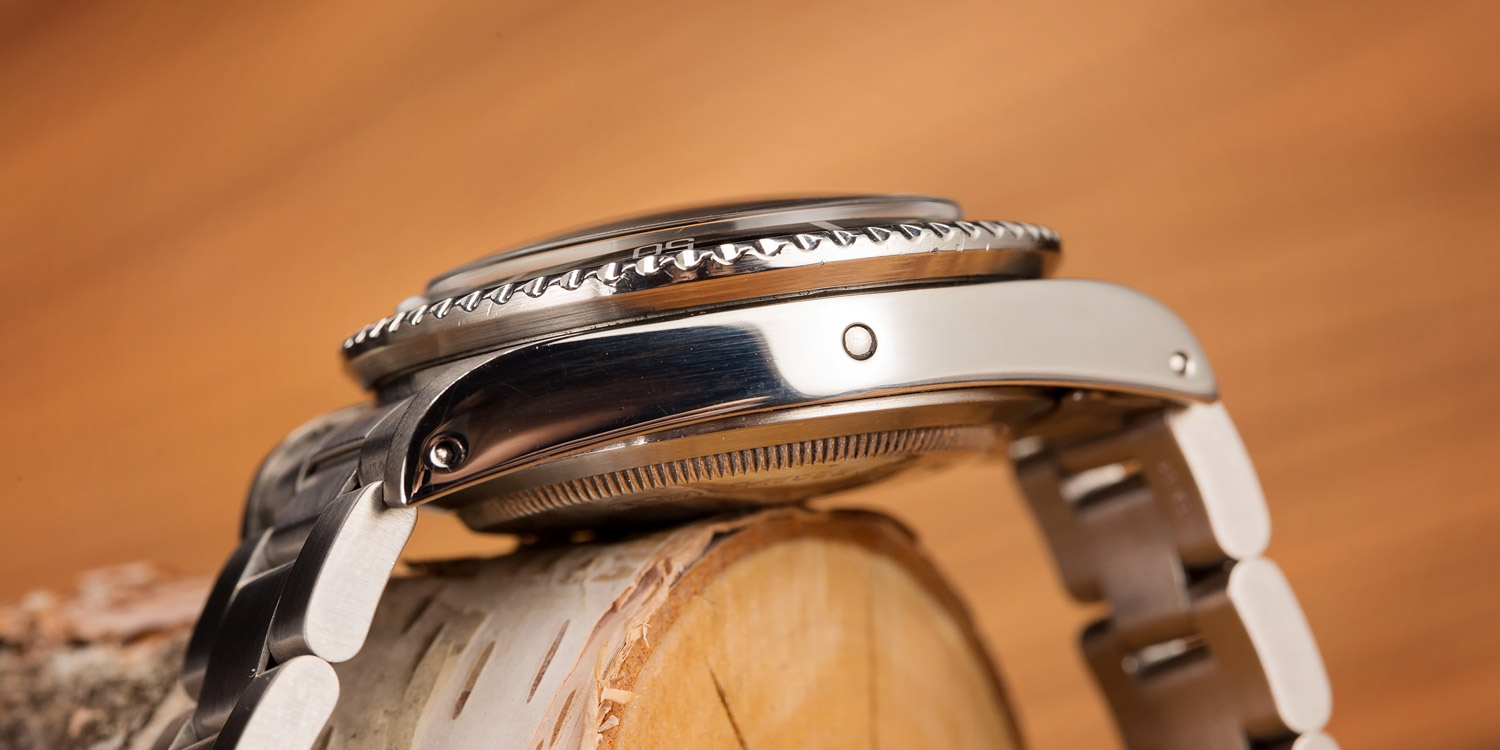 The escape valve was a critical upgrade on the Sea-Dwellers as they prevented damage from pressure. 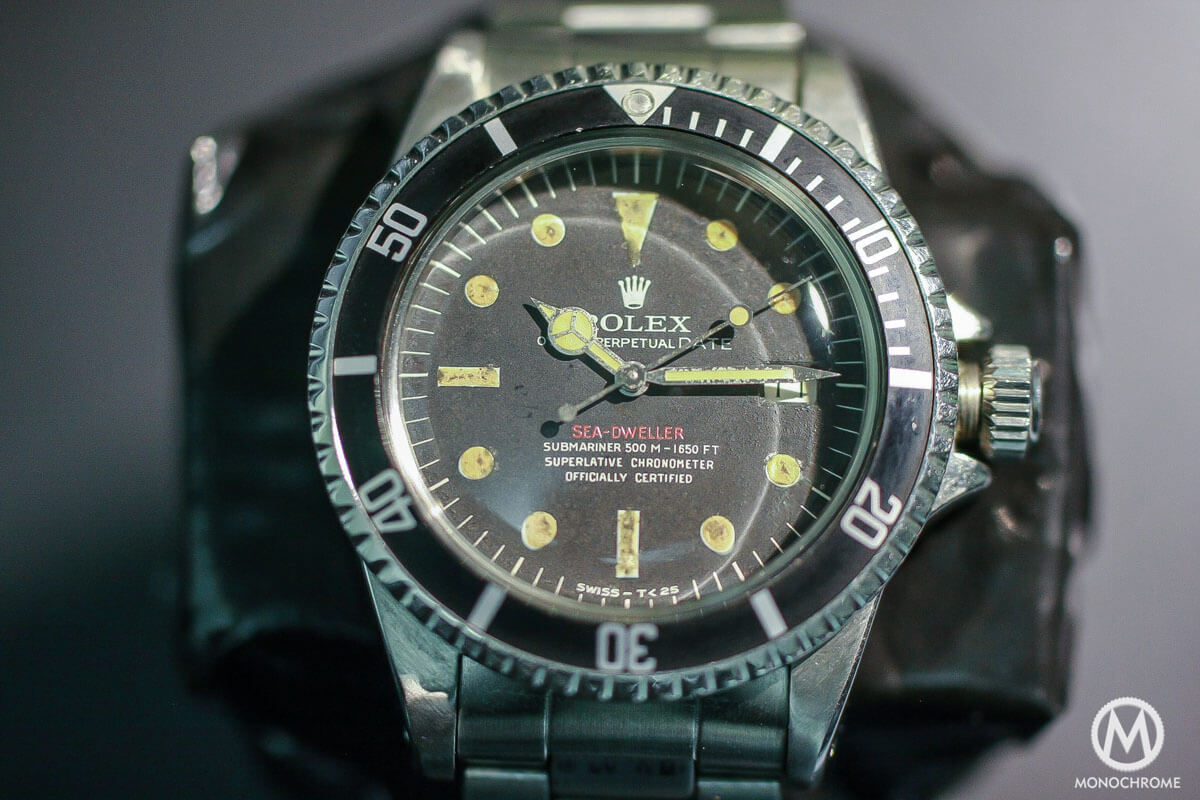 Although it is not the rarest iteration of the Sea-Dweller that Rolex has ever produced, the reference 1665 “Great White” is the watch that helped distinguish the Sea-Dweller as its own unique line of highly specialized, ultra-water resistant, tool watches – separate from the Submariner and specifically engineered for the rigors of saturation diving and professional use.