Making its debut in 1962, the Heuer Autavia wristwatch was the first new model presented with then-new CEO Jack Heuer at the helm of the company. While the watch was new, the name was actually taken from a dashboard timer for rally cars and is a combination of “automobile” and “aviation.” For this edition of our Vintage Watch of the Week, we’re looking at the historically significant Autavia 11630 T by Heuer. 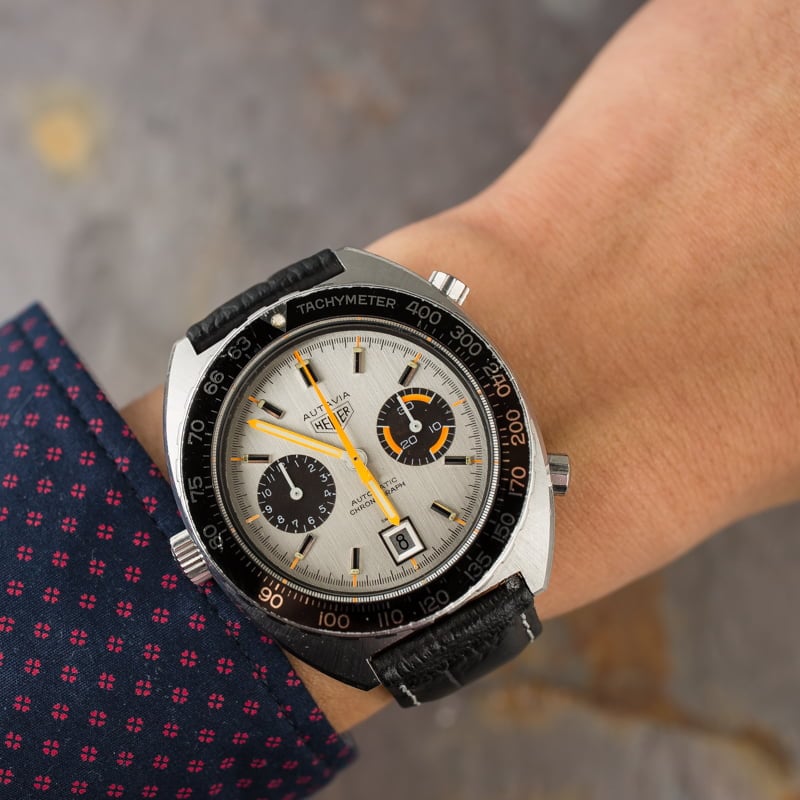 The Heuer Autavia 11630 is a vintage chronograph.

Heuer unveiled the Autavia 11630T in 1972, which was part of the third generation of watches to join the Autavia collection. The 1970’s Autavia watches included the ref. 1163, the ref. 11630, and the ref. 11063. This trio of watches featured a completely new case design with chunky integrated lugs. The case measures around 42.5 mm in diameter and 15 mm in thickness, along with the now-familiar right-hand position of the chronograph pushers and the left-hand position of the winding crown.

Note the “T” in the reference number, 11630 T, which signals the inclusion of a tachymeter scale, one of the key features of a chronograph,  on the watch bezel instead of a diver’s bezel or a GMT bezel. The black bezel of the Autavia 11630 T is bidirectional and its tachymeter scale allows wearers to calculate average speeds of moving vehicles. This particular vintage Autavia 11630 T boasts a special silver brushed dial rather than a more common black or white dial.

On the brushed silver dial we see fantastic orange details, from the center hands to the 12 accents on the outer seconds/minute track to the accents on the 30-minute register at 3 o’clock. Just above 6 o’clock sits the date window while at 9 o’clock is the 12-hour recorder. Topping the dial of the Autavia 11630 is a flat mineral glass crystal, unlike the plastic crystals of the Autavia 1163 models. 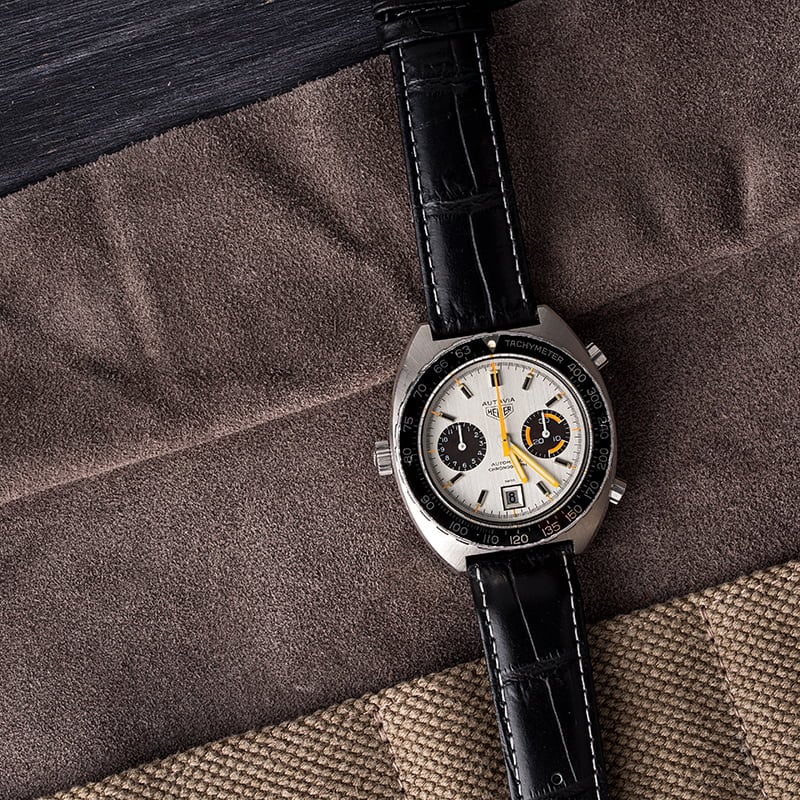 Note that the Heuer Autavia 11630’s winding crown is on the left.

A telltale sign of the movement within the vintage Heuer Autavia 11630 is the placement of the winding crown on the left-hand side rather than the more common right side. This signals the presence of the Chronomatic movement.

The development of the Chronomatic caliber—one of the world’s first automatic chronograph movements—was led by a consortium of watch brands that included Heuer, Breitling, Buren, and Dubois-Depraz. Chronomatic chronographs were introduced in March 1969 and they were made available for sale to the public the summer of the same year.

Heuer named their first version of the Chronomatic movement Caliber 11 and followed it up with a slew of derivatives such as Caliber 12. And powering this vintage Heuer Autavia 11630 is the Chronomatic-based Caliber 12 automatic chronograph movement operating at 21,600 beats per hour.

Sporting a recognizable shape, iconic name, and legendary movement, the vintage Heuer Autavia 11630T is a fantastic living piece of horology history just like the Heuer Monaco. And despite its age, the Heuer Autavia has the added benefit of featuring a modern sized case, making it a very wearable vintage watch that fits today’s size standards.