The Rolex Submariner watches made for the British Royal Navy have a special place in many collectors’ hearts. With a rich, unique history and a bonafide rarity factor due to the fact that they were never released to the public, the Rolex Military Submariner watches are some of the coolest and most valuable heritage pieces you can collect.

Here, we’re getting you up close with the Submariner 5513/0, one of the 1970s versions of the Royal Navy Rolex watches, of which just 1200 were made. Hard to come across and now in incredibly high demand, this is one of the rarest examples of them all. That’s because experts estimate that only a few hundred of these Submariner’s remain in their original condition, many of them receiving replacement parts or simply being destroyed over the years. 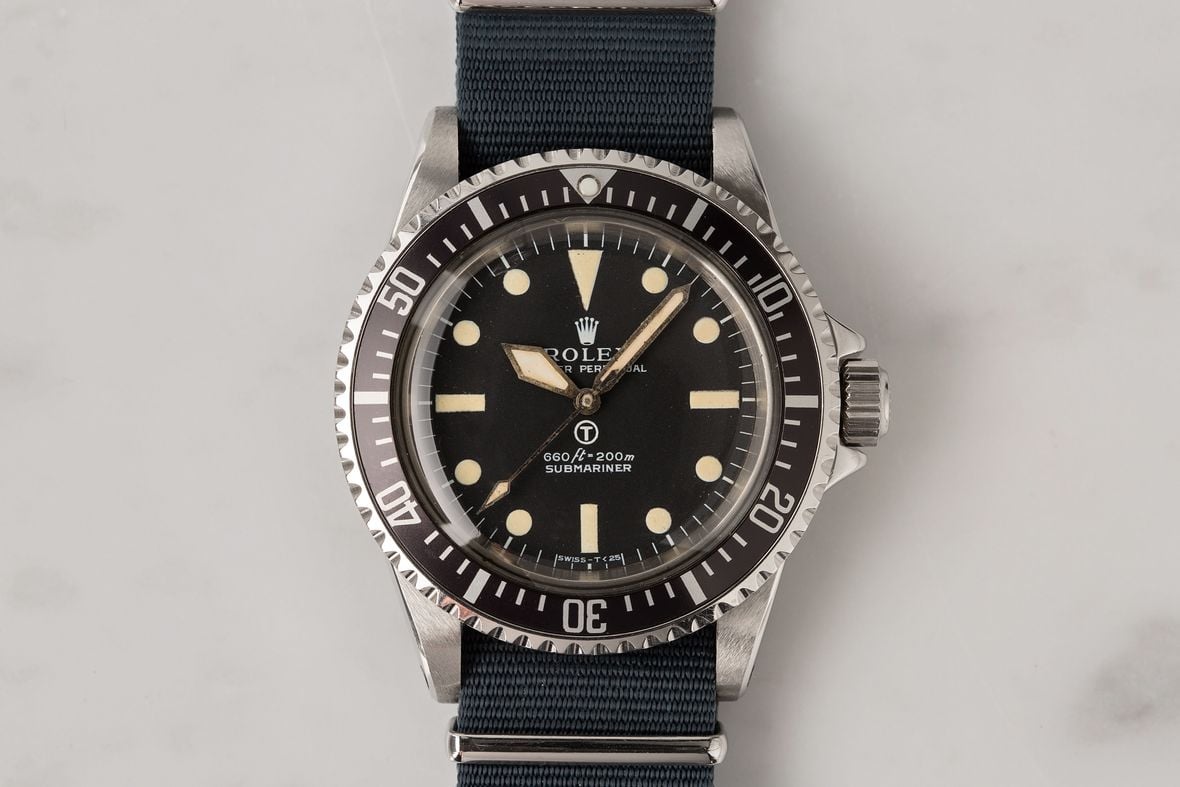 The Rolex ‘MilSub’ Submariner was produced by Rolex and issued to divers by the British Ministry of Defense. These Rolex MilSub watches were used by both “clearance” divers who engaged in shallow, attack-type swimming as well as deep, mine-hunting divers. While a number of different Rolex Submariner watches were used by members of the British Royal Navy, the military-issued ref. 5513/0, which was released in 1976, is thought to be one of the rarest of them all. 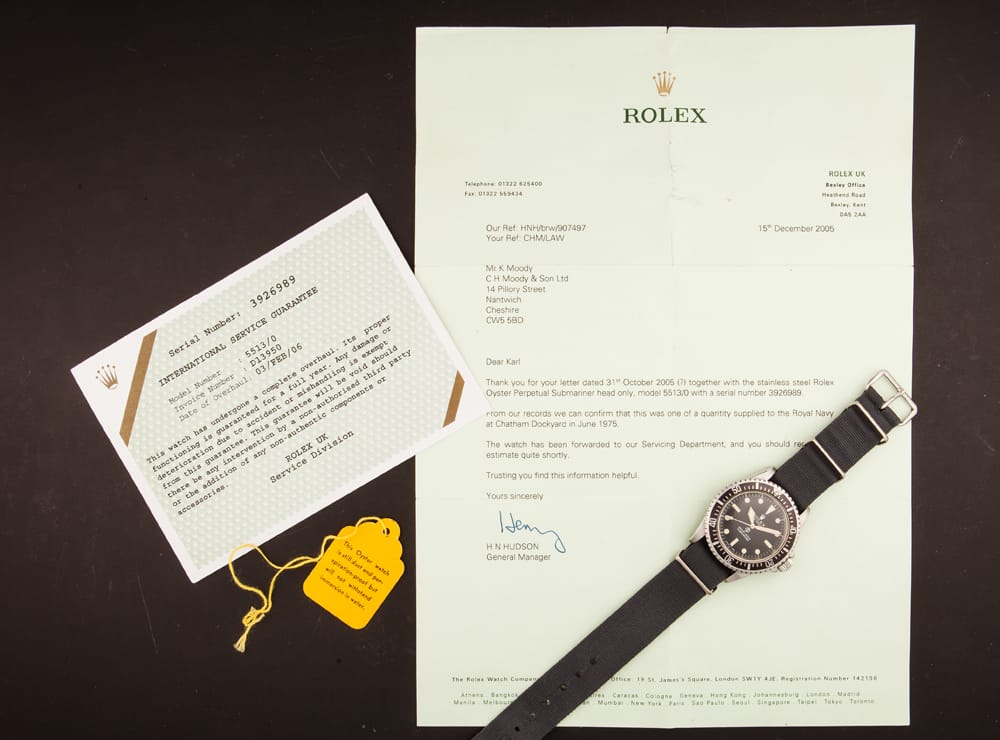 Military-issued Rolex Submariner watches – or “Milsubs” as they’re sometimes called – were created, manufactured, and distributed solely for military use by Rolex for the British Royal Military. Although Rolex is known for its history of creating highly specialized, utilitarian timepieces, from the Submariner to the Explorer and the Milgauss, any military complex, including the British, would want their own dedicated production to meet their specific needs.

From 1957 through the 1970s, Rolex produced four different references that were modified to meet the requirements of the British Armed Forces – including the ref. 5513/0.

In our research of the Military Diving Manual – known as the “Diver’s Bible” – we found that divers were issued a Rolex as part of their standard equipment. In it, divers were reminded that all watches were to be checked “before and after use” for possible cracked glass which could prove to be dangerous. These Submariner watches were working tools that saw incredibly demanding use, and daily wear and tear during training exercises and deployment is definitely to blame for how few of these watches survived to reach the market today.

Because they are so exclusive and so few ever made it out of the Navy in one piece, collectors are willing to pay hefty sums for this piece of both Rolex and military history. 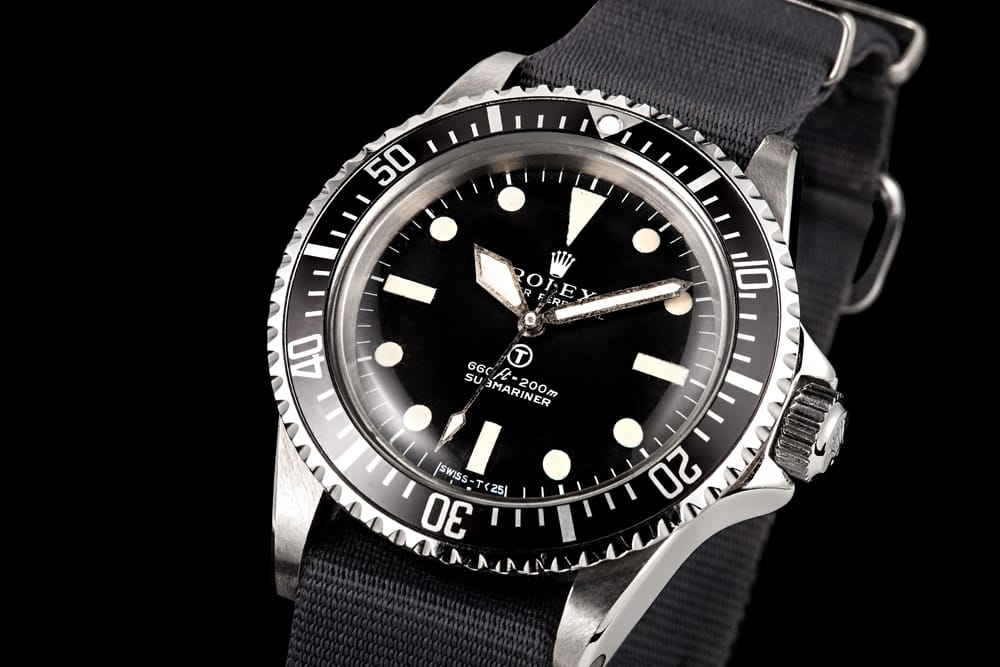 There are a few ways to identify a unique Military edition Submariner 5513, but one of the easiest to spot is the dial with a modified large “T” in a circle above the “200 meters/660 feet” depth rating on the lower half of the dial. Like other models, the “T” indicates the presence of tritium – a radioactive hydrogen isotope that glows in dark environments. However, what makes it rare is the exaggerated size and the circle to make it appear more prominent, rather than just appearing as a tiny mark at the 6 o’clock location.

Another one of the most striking details of this watch is the notable hands. This style is unique among the Rolex Submariner and is referred to as “sword” hands because of their sword-like shape which are a striking contrast to the traditional, iconic Mercedes hands used on the Rolex’s legendary dive watch. The hand shape comes from military specifications for a dive watch, and the Omega Seamaster models that were issued to the British Navy also have sword-shaped hands. Additionally, due to their large surface area, the tritium luminous materials on the hands are prone to flaking, which makes finding a well-preserved example even more difficult.

Something else to look out for on the Military Submariner 5513/0 is the bezel with an insert that has minute markings all the way around. This was a special bezel made only for military-issued Submariner watches, so you just won’t see it anywhere else. Look closely at the 5513 and the case looks typical, but upon closer inspection, you’ll notice that the spring bars are not spring bars, but rather are solid metal rods welded to the lugs of the case, which require a pass-through NATO-type strap. Turn the watch over and the caseback also has MOD-issued numbers engraved on it along with the Broad Arrow triangle, which signifies that the watch is property of the British Ministry of Defense.

These case-back numbers are quite different depending on the delivery date and must be compared to other watches in the same delivery sequence to verify their authenticity. And while there are a lot of these signature features to look for, there are authentic outliers. For example, a few watches were delivered with Mercedes hands, and some with 15-minute bezels, so identifying the right reference can be difficult and usually requires an expert eye. Additionally, Rolex also made the Submariner 5517, which is a unique reference specifically made for the British Ministry of Defense, and these watches can look near-identical to the military-issued versions of the ref. 5513 Submariner. 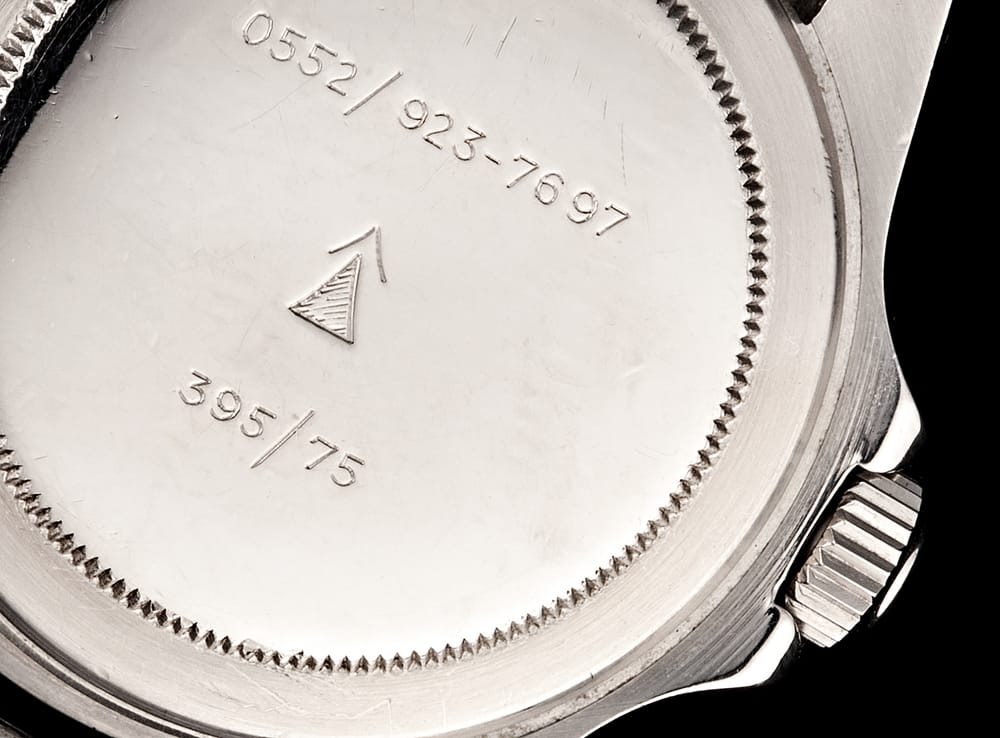 How Do I Find A Military Submariner 5513?

Looking for a Rolex Military Submariner 5513 is not a quest to be taken lightly. It will probably require months of searching, and you will also likely have to decide if you are willing to take one with different parts as many have been modified over the years. So many of the surviving examples no longer have all of their original components, and it was also a common practice for MilSub watches to be “converted” to normal Submariner 5513 model once they were no longer serving in the navy, so the actual number of military-issued Rolex 5513 watches in existence today is quite a bit less than the number that was originally produced.

However, owning a piece of history may be well worth the extra effort and waiting for just the right watch may be rewarded with a great find. A true grail for vintage Rolex collectors and a watch with a legitimate history of active and rigorous use, the Military Submariner 5513 is an incredibly special timepiece and one that represents an era before Rolex dive watches were status symbols and luxury items, and were instead simply regarded as some of the best and most durable wristwatches available. 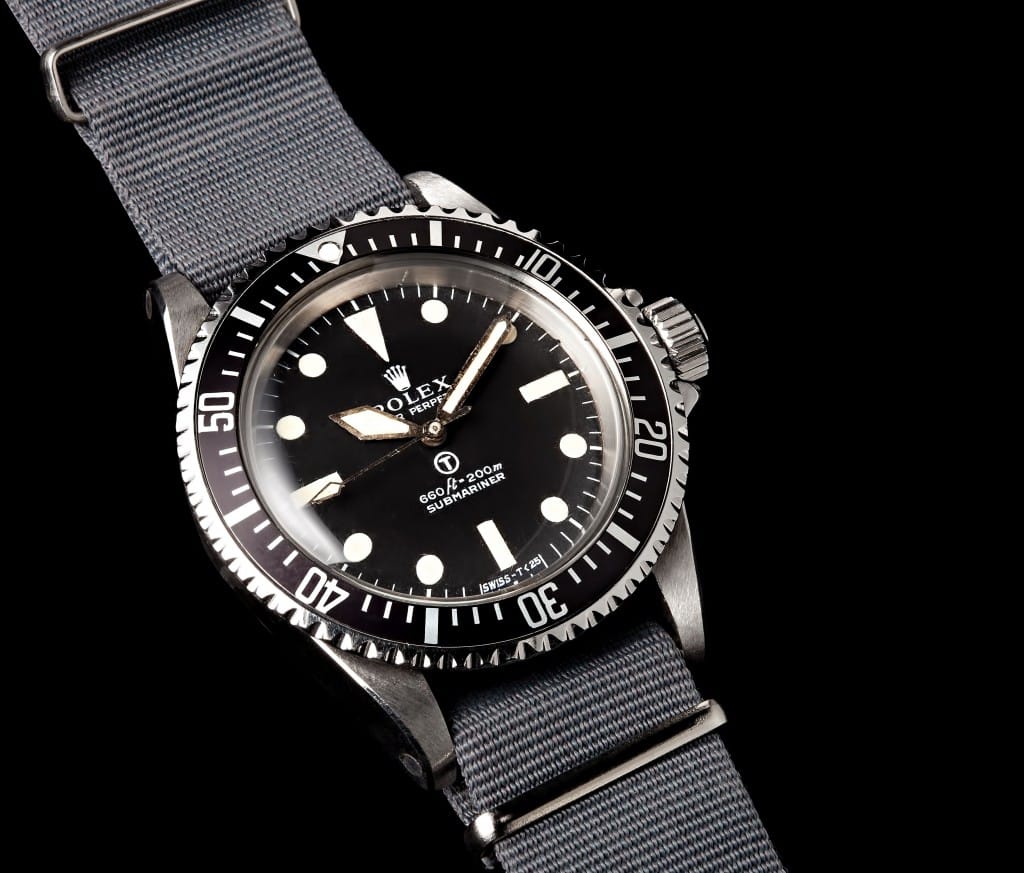