The Rolex Daytona has become one of the most cherished models in the brand’s entire collection, but it did not start that way. In fact, when the hand-wound Cosmograph Daytona chronograph was first launched back in 1963, it was a rather lackluster sales performer for Rolex and remained as such until the early 1980s. Yet, things soon changed as the Italians started to become avid, serious collectors later that decade, and prices for used vintage Rolex Daytona models began to skyrocket.

Four-digit reference number Daytona watches that were once selling for $750 are easily worth between five to six figures in the secondary market today. It’s also not uncommon to find some ultra-special Daytona watches, such as those with the so-called “Paul Newman” exotic dials, fetching over a million at auction. And who can forget Paul Newman’s own Daytona “Paul Newman” ref. 6239, which sold for a record-breaking $17.8 million when it came up for sale in 2017?

However, vintage references aren’t the only top-selling Daytona models; the retro references from the 1980s and 1990s are also exceedingly collectible, as are plenty of post-2000 models and current-production Rolex Daytona watches. Ask any Rolex AD if they have a Daytona available for sale in-store and they’ll likely tell you (politely) to get in line on a five-plus-year waitlist. The other option is to buy pre-owned Daytona watches from the secondary market at double or triple their original retail prices. The Rolex Daytona frenzy, my friends, is alive and well. But, which are the top Rolex Daytona models that stand out from an already extremely popular watch lineup? Keep reading to find out. 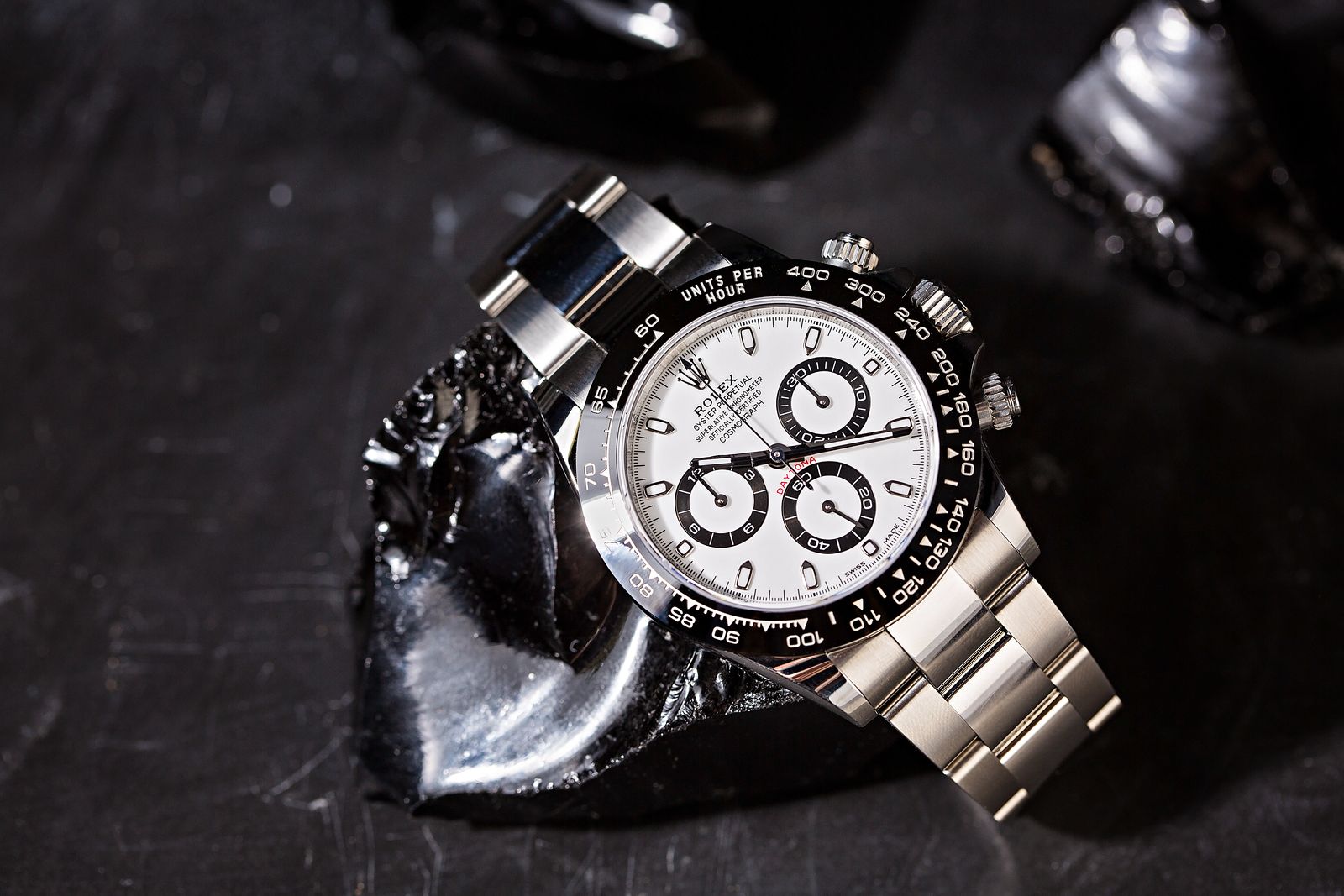 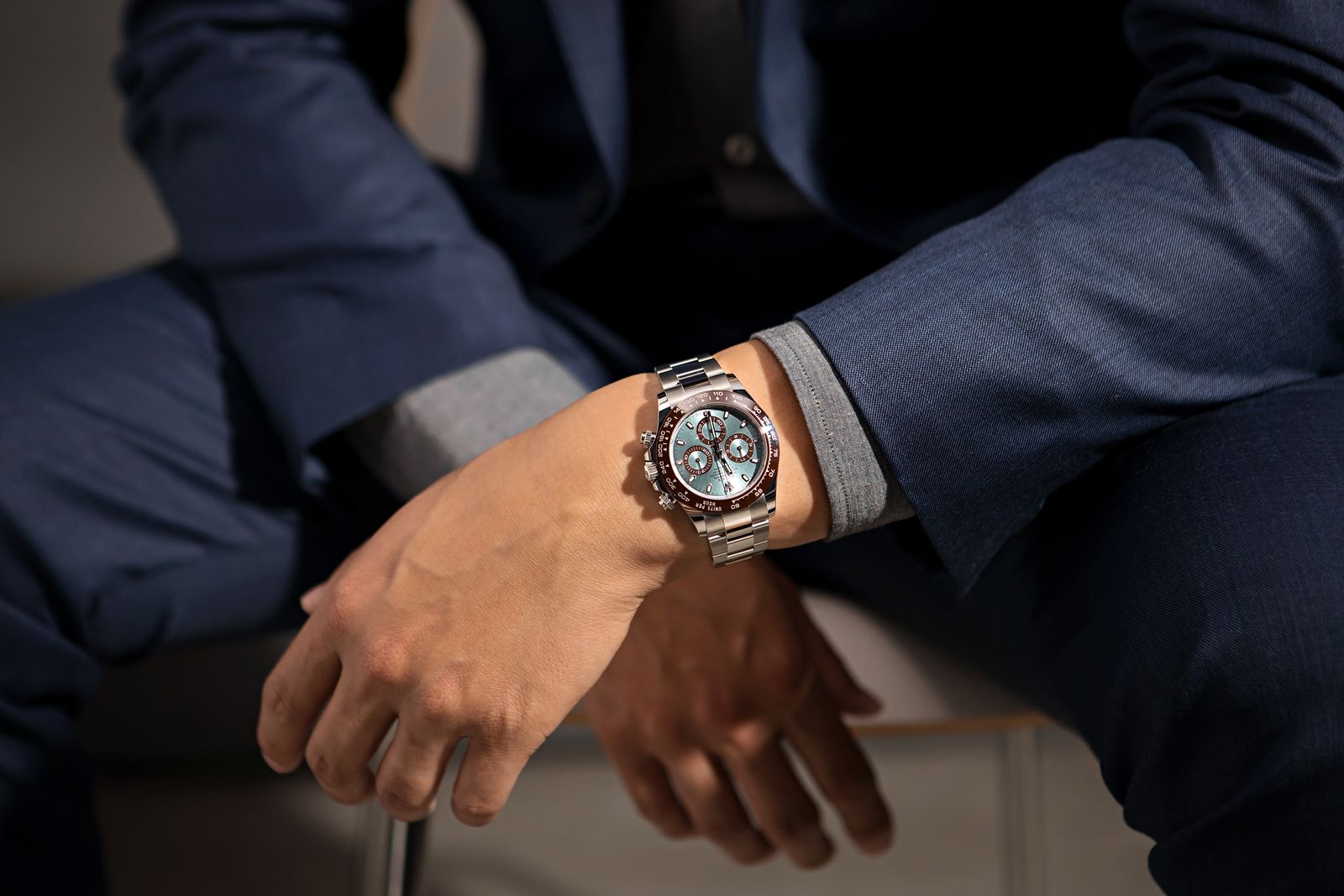 Founded in London, England in 1905, Rolex was the brainchild of German native, Hans Wilsdorf. Wilsdorf had a monumental idea for the time: design and manufacture a wristwatch, which was something unpopular in the days of pocket watches. This, along with the wristwatch’s reputation for inaccuracy, made Wilsdorf’s idea hard to sell at first. Persistence paid off, however, and Wilsdorf, along with his business partner Alfred Davis, enlisted Swiss watchmakers to come up with innovative technology designed to create not only an accurate but also beautiful, wristwatch. The Rolex watch was born.

From the start, Wilsdorf pursued the timekeeping perfection known as “chronometric precision.” This term confirms that the quality of a timepiece’s movement and its timekeeping is as precise as possible. Rolex was the first wristwatch to be awarded the Swiss Certificate of Chronometric Precision in 1910. The company moved its operations to Geneva, Switzerland in 1920; this was a logical step in the business’ growth, considering many of the watch’s mechanics were originally designed and manufactured by watchmakers in Bienne, Switzerland.

The ultimate in luxury and class comes to mind when one thinks of a Rolex watch. Other apt descriptions of these coveted timepieces are accuracy, quality, and beauty. These accolades, however, do not fully describe this revolutionary brand. Beyond its beauty, Rolex timepieces are crafted upon over a century of superior watchmaking. Rolex set the bar for innovative timekeeping, and no other company can meet the Rolex standard.

Today, Rolex maintains its reputation for chronometric precision and superior timekeeping, with which no other watchmaker in the world can compete. From his humble beginnings in 1905, Wilsdorf’s dream to manufacture quality wristwatches has grown beyond even his expectations. The modern-day Rolex company produces over 2,000 wristwatches per day and brings in a multi-billion dollar revenue on an annual basis. 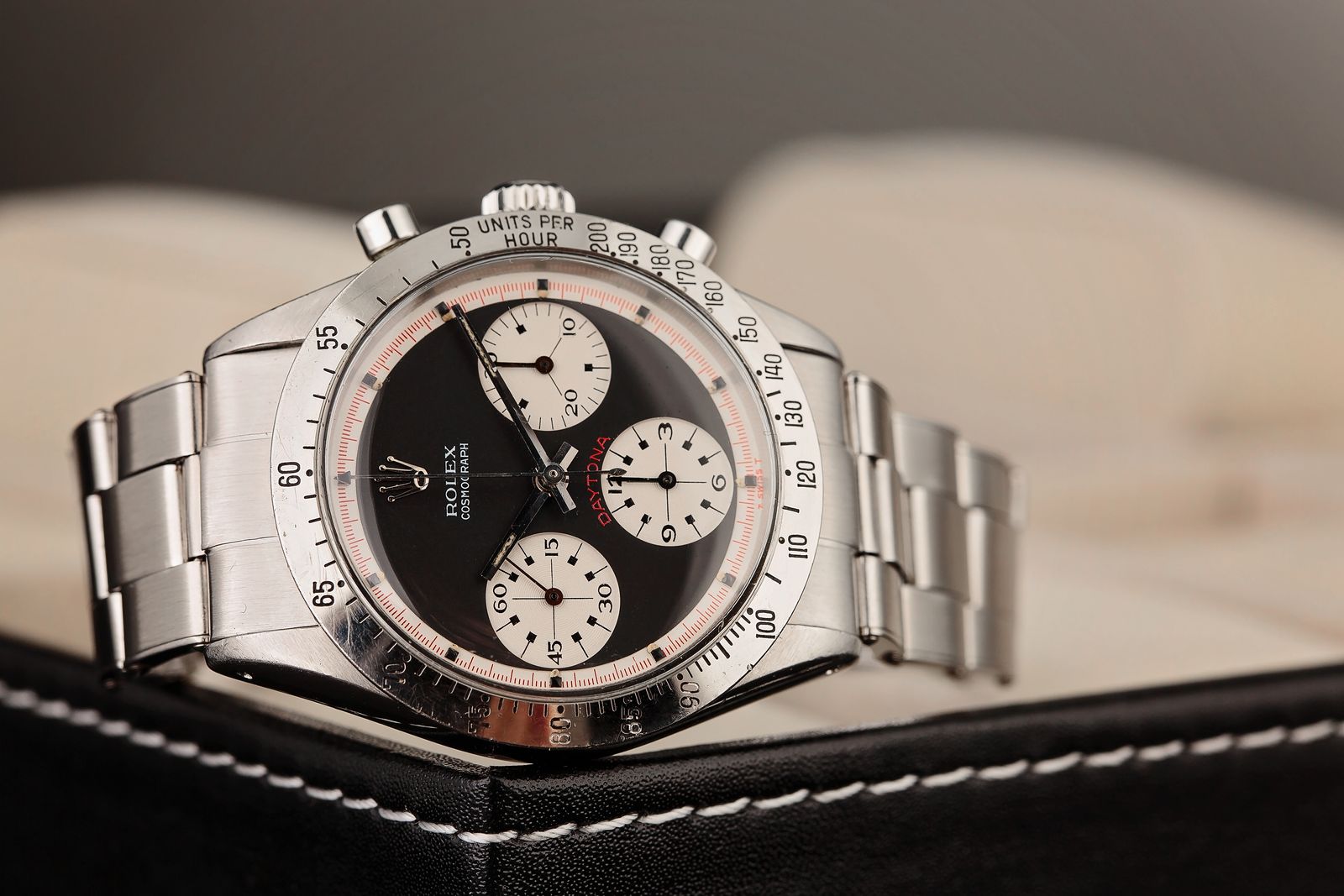 One of the more popular modern-day Rolex series is the Daytona, which premiered in 1963. As its name suggests, the Daytona series is inspired by the world of motorsport and caught the attention of race car drivers – including legendary actor and racing enthusiast, Paul Newman. Newman reportedly wore a Rolex Daytona every day from the 1970s until he died in 2008, and it was because of him that vintage Rolex Daytona watches with exotic dials are now better known as “Paul Newman Daytona” watches.

The original Daytona series, characterized by smaller 38mm cases and hand-wound Valjoux-based movements, was manufactured from 1963 until 1988. Perhaps most surprising to any Rolex buyer today is that Daytona models were initially less expensive than other Rolex models. Today, however, these original Daytona references are considered the ultimate prize in collectible vintage Rolex watches; many enthusiasts regard them as the “holy grail” of Rolex watch collecting. 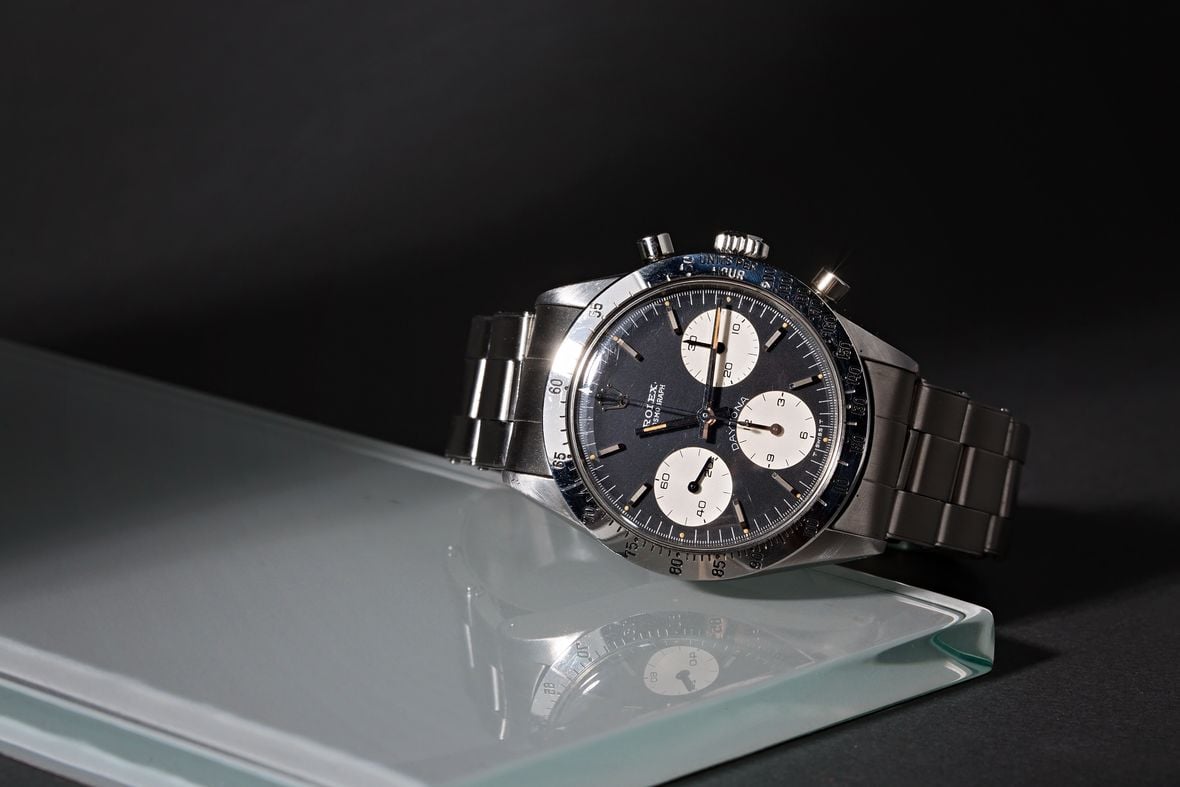 Rolex dropped the manual-winding Daytona model from its catalog in 1988 and replaced it with a modern version that not only came with bigger cases, refreshed dials, and contemporary details like sapphire crystals, but also with an automatic movement powering the chronograph. Much like the original Daytona series, the second series has also reached a cult-like status with Rolex fans, due, in large part, to the limited production of this particular model.

While the era of the automatic Rolex chronograph continues today, a significant update occurred in the year 2000. That was when Rolex replaced the Zenith El Primero-based Caliber 4030 that served to power automatic Daytona chronographs from 1988 onwards with the entirely in-house developed Rolex Caliber 4130 – the movement that remains the engine of the Daytona fleet today. 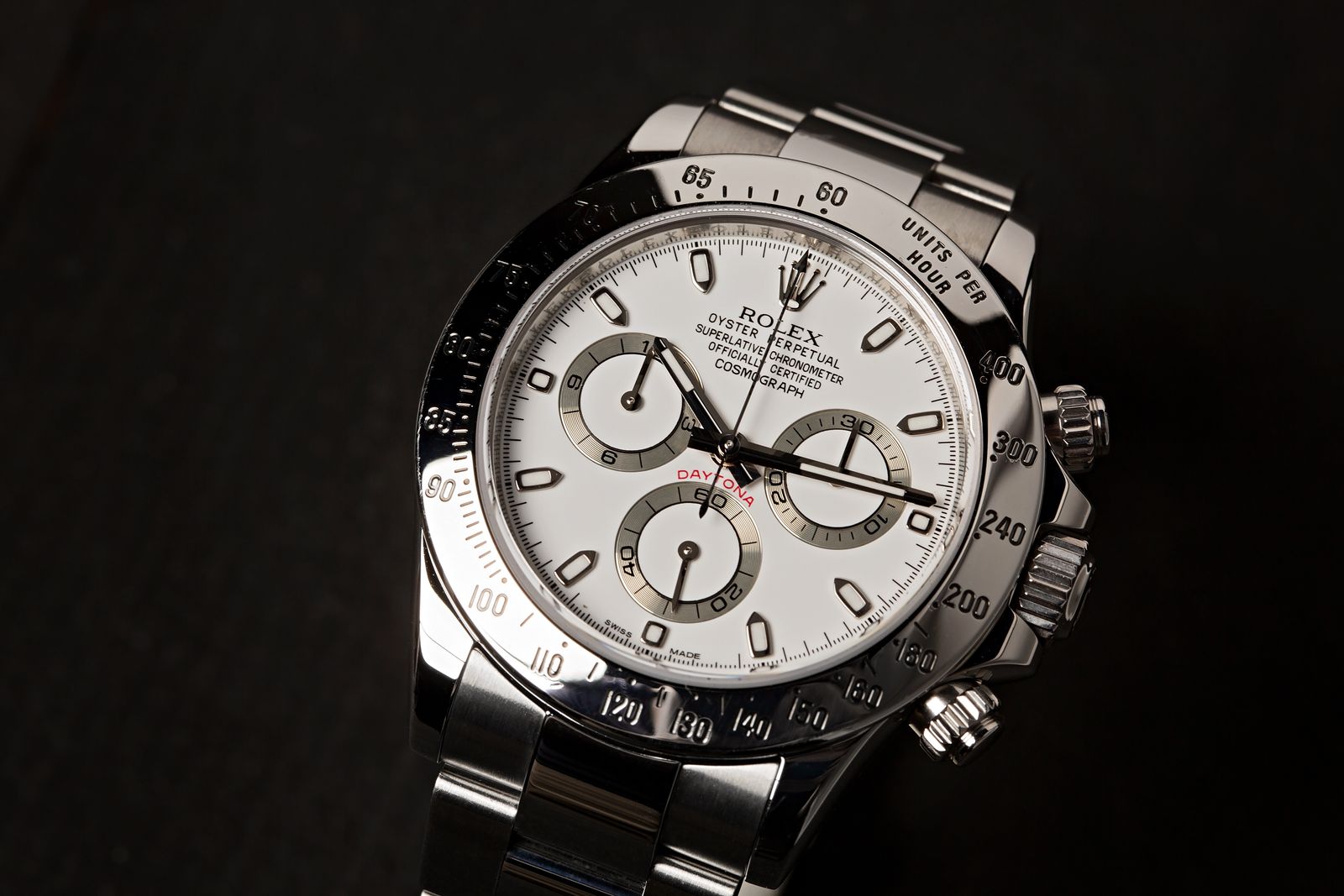 The stainless steel Rolex Daytona 16520 is a member of the second series of Daytona watches, introduced in 1988. While Rolex used the famed Zenith El-Primero self-winding chronograph movement as the base, the company greatly modified the movement and renamed it Caliber 4030. Thanks to its modern refresh, bigger size, and self-winding movement, the Daytona 16520 “Zenith” quickly became a must-have Rolex watch of its era.

The Rolex Daytona ref. 116520 is a member of the third series of Daytona watches (and the successor of the 16520), released in 2000. It boasts many of the same features as the 16520, with one significant exception. For the third generation in the Daytona series, Rolex furnished the Daytona 116520 with the in-house-made Caliber 4130. Like its predecessor, the Daytona 116520 was met with great success and it quickly became one of Rolex’s top models.

In 2016, Rolex unveiled the newest iterations of the stainless steel Daytona in the form of the reference 116500LN. The Daytona 116500LN has the same 40mm case with screw-down pushers as previous automatic models, however, it comes equipped with a brand new black Cerachrom ceramic bezel. As is customary, the steel Daytona 116500LN is available with a black or white dial, and the white “Panda” dial with black subdials is especially sought-after. Regardless of the dial color, the Daytona 116500LN is one of the most valuable modern luxury watches in the secondary market right now and one of Rolex’s best-selling models. 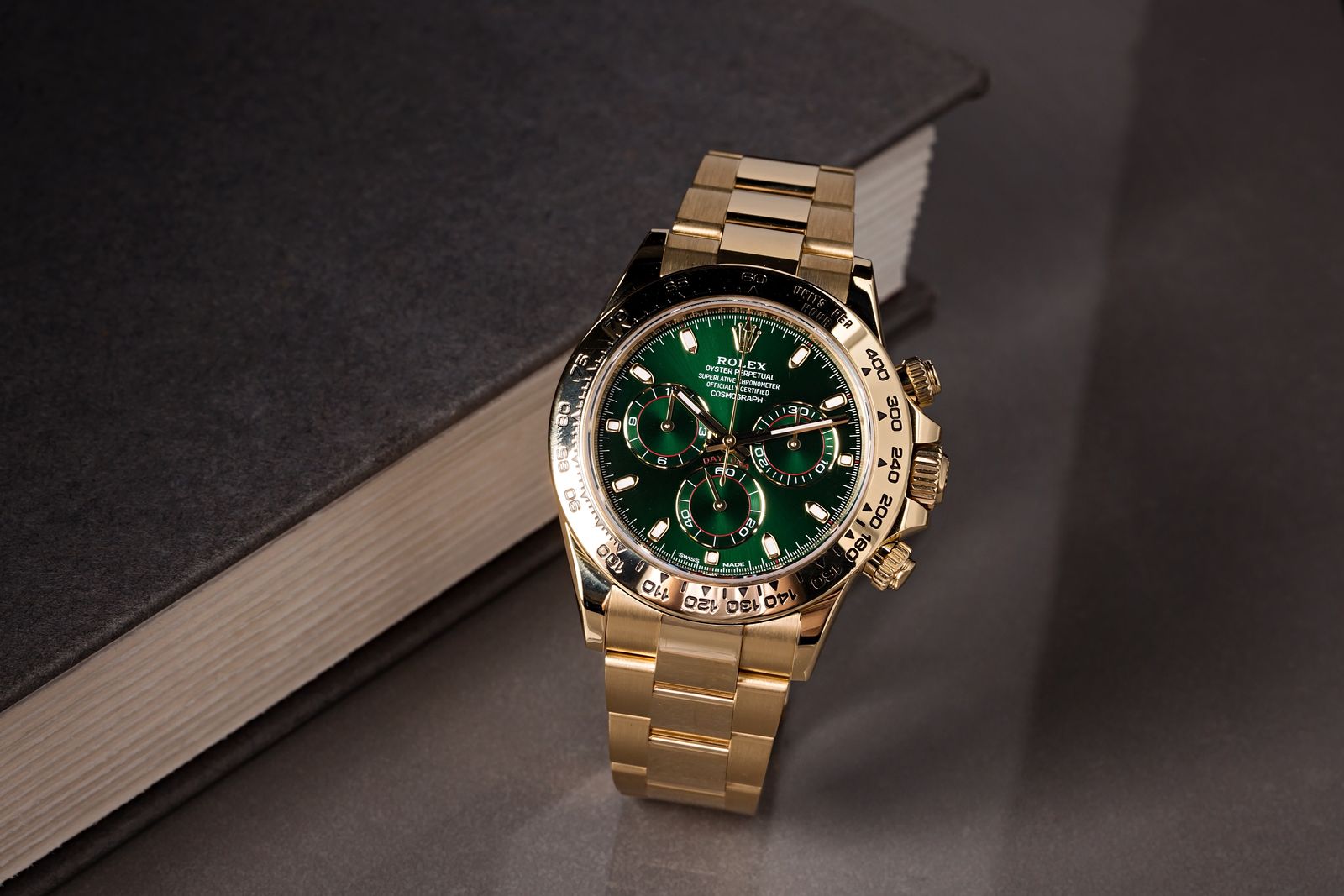 The gold Rolex Daytona ups the ante in luxury by removing the stainless steel accents and presenting owners with a full 18k gold case, tachymeter bezel, and in most cases – bracelet (if it’s not a model presented on a black rubber Oysterflex bracelet or leather strap). Additionally, Rolex offers the Daytona in three shades of 18 karat gold: yellow, white, and a proprietary pink gold alloy called Everose.

Similar to the steel variants, second-generation “Zenith” Daytona models in gold have five-digit reference numbers such as the white gold ref. 16509, yellow gold ref. 16528, and yellow gold ref. 16518 paired with a leather strap. These models were replaced with the third generation, six-digit Daytona watches in 2000, including examples like the 116509, 116528, and 116518. In 2008, Rolex expanded the collection with the Everose gold Daytona 116505 and in 2016, the full yellow gold Daytona was updated and given a new 116508 reference number.

Some of the most popular gold Daytona models in today’s market include the yellow gold Daytona ref. 116508 with a green dial, the white gold ref. 116509 with a blue dial, and the Everose Daytona Rainbow ref. 116595RBOW with a dazzling multi-colored sapphire-set bezel. These modern Daytona gold watches are all considered collector’s items (and celebrity favorites as seen on the wrists of John Mayer, Mark Wahlberg, Jonah Hill, and Adam Levine, just to name a few) and they command huge premiums in the pre-owned market. 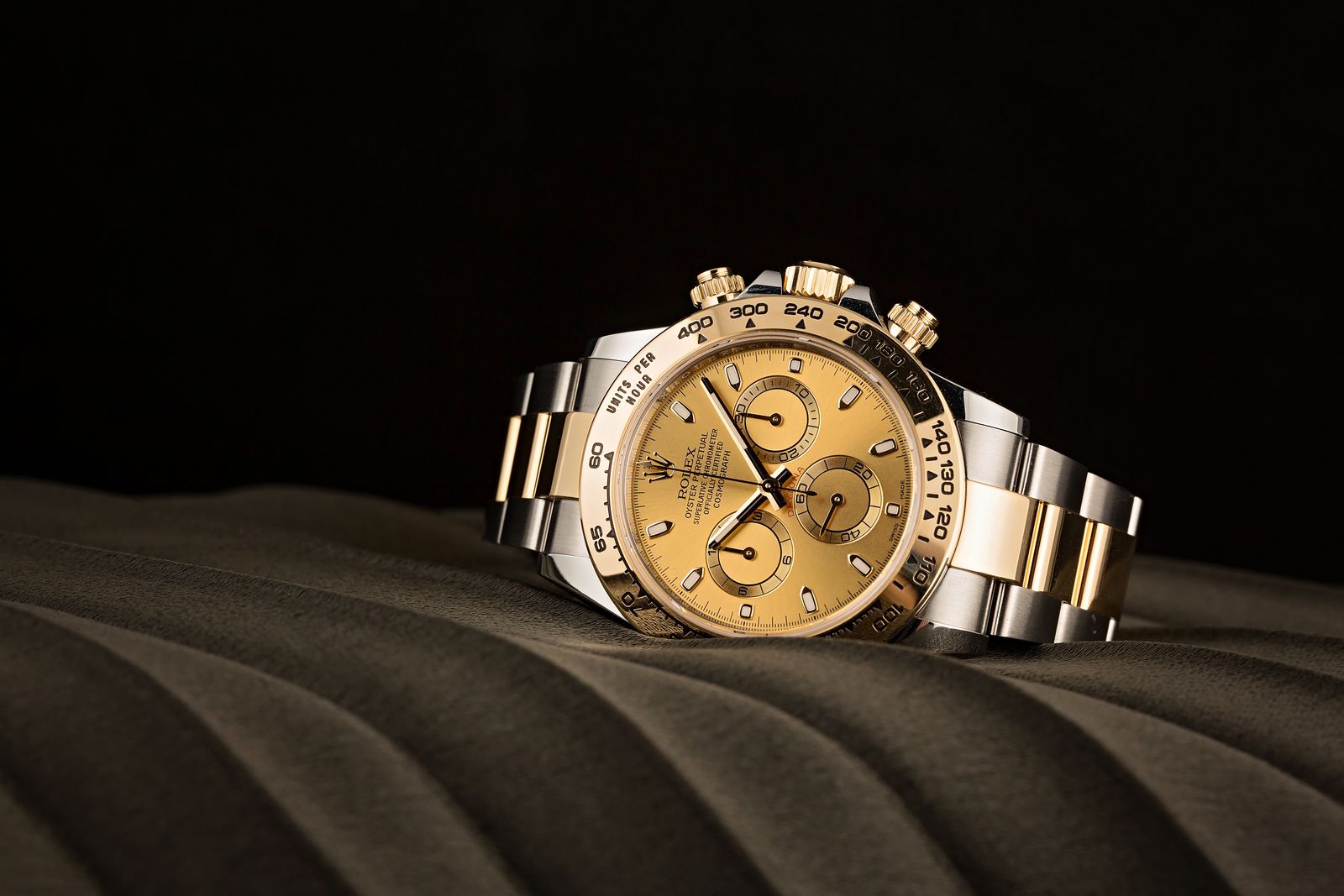 The two-tone Rolex Daytona is another beauty in the Daytona series and there are examples from both the second and third production series. The Rolex Daytona two tone includes a steel case topped with an 18k yellow gold tachymeter-engraved bezel. Its dial is also accented in the two-tone stainless/gold combination, as is the Oyster bracelet and clasp.

The Daytona ref. 16523 is the two-tone model from the “Zenith” era while the Rolex Daytona ref. 116523 was the first steel and gold model to feature the in-house Caliber 4130. Rolex quietly replaced the Daytona 116523 with the Daytona ref. 116503 in 2016. While these two models look almost identical, the current production 116503 includes a refreshed bezel with bolder markings.

Two-tone watches have always been a polarizing style: some love them while others don’t. In fact, two-tone watches, even Rolex ones, were commonly found at significantly discounted prices in the pre-owned market. However, when it comes to Rolex Daytona models, two-tone variants are indeed popular –  and priced well above retail for pre-owned examples. 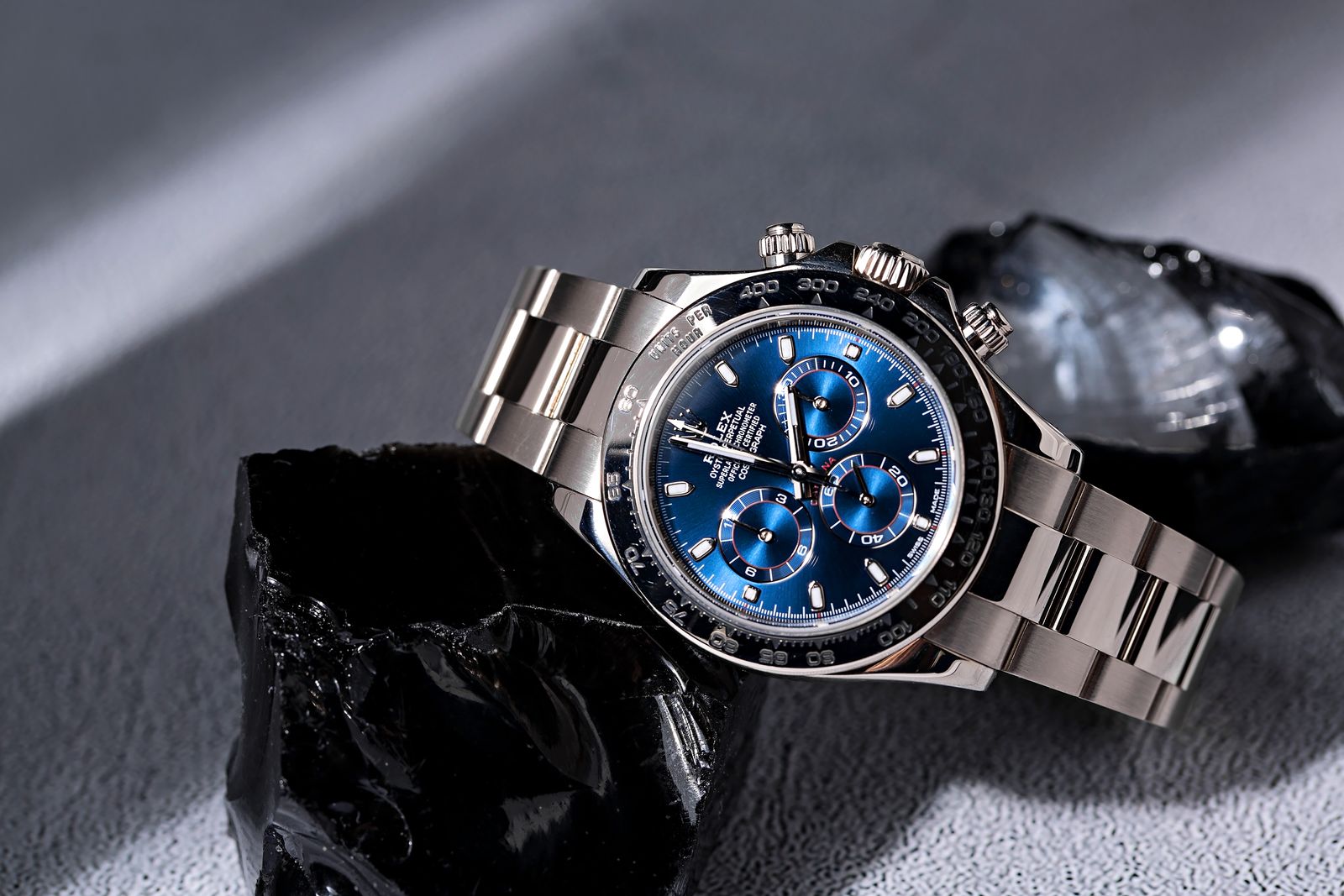 Regardless of the specific model, the Daytona has proven to be one of the most popular, collectible, and reliable Rolex watches to date. This is a remarkable feat considering that the Daytona was a slow-seller for the brand during its early history.

Things have certainly turned around for the Rolex Daytona lineup and it has truly earned its iconic status. Despite being a purpose-built chronograph intended for the racetrack and its many years spent as an overlooked model within Rolex’s catalog, the Daytona is now regarded as the single most in-demand Rolex model and also one of the most iconic luxury timepieces in the world. While there are countless lookalikes on the market, there is only one Rolex Daytona. And we have no doubts that it will continue to be Rolex’s top-seller for the foreseeable future. 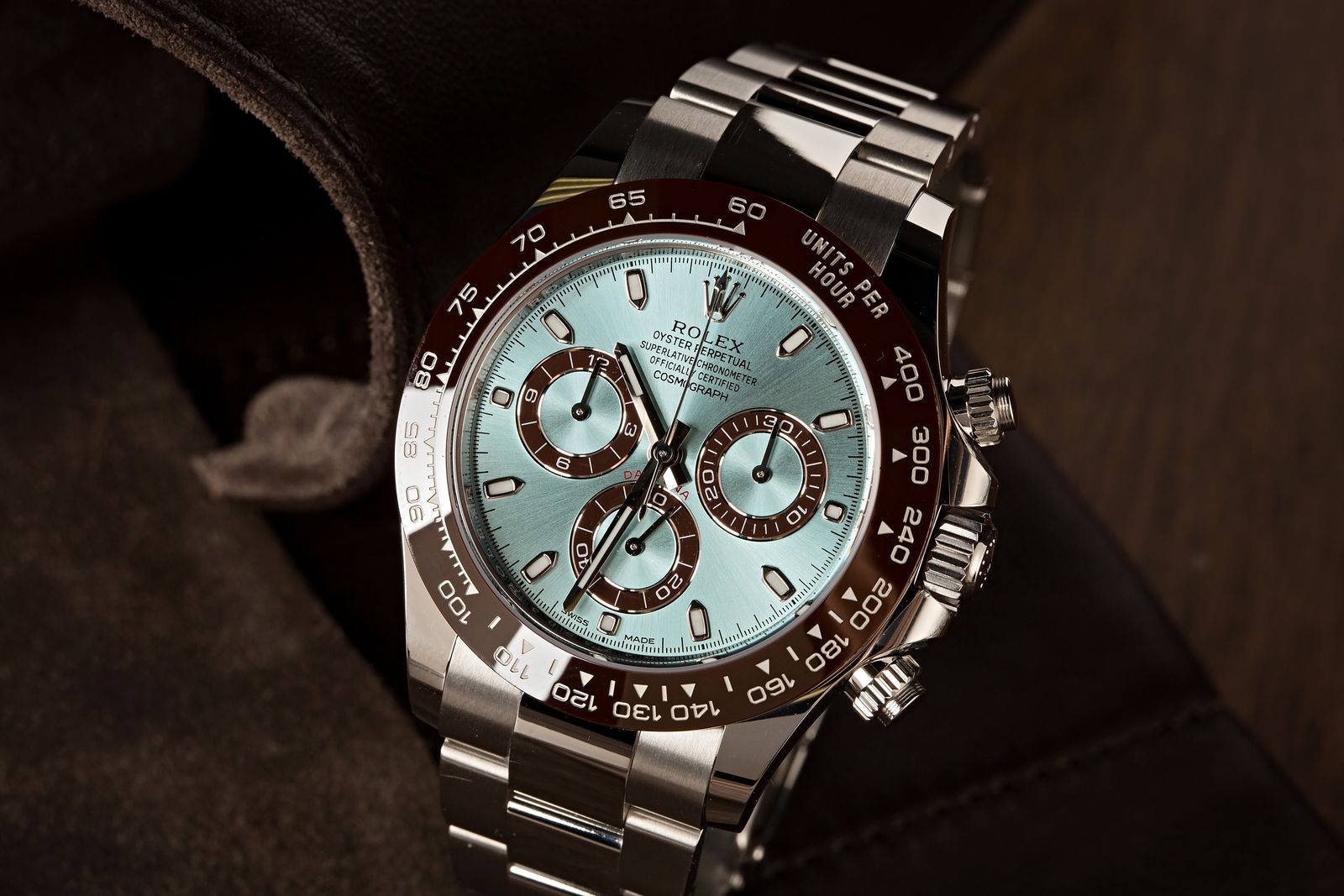