The Yacht-Master is an important watch within Rolex’s history because it marks a point when the company began to solidify its reputation and position within the market as a manufacturer of premium luxury timepieces, rather than just high-end, purpose-built watches.

The Yacht-Master has an interesting origin.

By the late 1980s, Rolex was a well-known status symbol, and many people were purchasing Rolex sport watches with zero intention of actually using them for their advertised sports or activities. In 1992, Rolex released a watch specifically designed for those who enjoyed the aesthetic of sport watches, but whose lifestyles called for a watch that was more likely to be worn with a button up and blazer than a wetsuit.

Introducing the Yacht-Master 16623 to the Public

Despite being released as an entirely new line of watches, the Yacht-Master strongly resembles Rolex’s Submariner. Rumor has it that Rolex contemplated a re-design of the Submariner during the 1980s, but ultimately decided against too radical a change due to the widespread success of their existing design. According to legend, one of the proto-type designs that was initially deemed too much of a departure from the original Submariner later became the design for the first Yacht-Master when Rolex decided to introduce a luxury-oriented, sports watch several years later.

Instead of focusing on specialized complications or record-breaking depth ratings, Rolex chose to place the emphasis of the Yacht-Master reference 16623 on the use of premium materials and a slightly more refined design. Despite its strong visual resemblance to Rolex’s Submariner, the Yacht-Master was only given a 100 meter depth rating, and its rotating bezel with minute markings was given bidirectional movement, since it was not likely to be used as a timer on serious dives.

Many people were beginning to get Rolexes for its name rather than its function.

The original Yacht-Master (the reference 16628) was craft entirely from 18-karat, yellow gold, and was fitted with a white dial with black hour markers. Since its introduction, Rolex has released the Yacht-Master in three different sizes and in a wide-variety of different metal combinations. Although it closely resembles the Submariner in design, the clasp on the Yacht-Master’s Oyster bracelet is not equipped with a wetsuit extension, since the watch was intended to be more of a luxury item than a piece of serious dive equipment.

Despite the numerous variations that have been released, the classic, men’s size Yacht-Master has always had a case diameter of 40 mm, and has always been powered by Rolex’s Caliber 3135 movement. Additionally, the entire bezel on a Yacht-Master is always craft from precious metal – either solid 18-karat yellow gold or 950 platinum.

The Rolesor version of the men’s Yacht-Master, the reference 16623, combines 904L stainless steel with 18-karat yellow gold to create a more sports-oriented rendition of the classic two-tone watch design. Much like the bracelet on other Rolesor watches, the center links of the Rolesor Yacht-Master’s bracelet are made from 18-karat yellow gold to match its solid gold bezel.

Unlike virtually every other Rolesor watch that Rolex has ever produced, the crown on the Rolesor Yacht-Master is made from stainless steel rather than yellow gold. Whether or not this was done to help visually distinguish the reference 16623 from the Rolesor version of the Submariner remains uncertain, and will likely forever remain unconfirmed. Regardless, the combination of a solid gold bezel and an absence of gold on the crown create a rather noticeable difference between the two, otherwise very similar, watches. 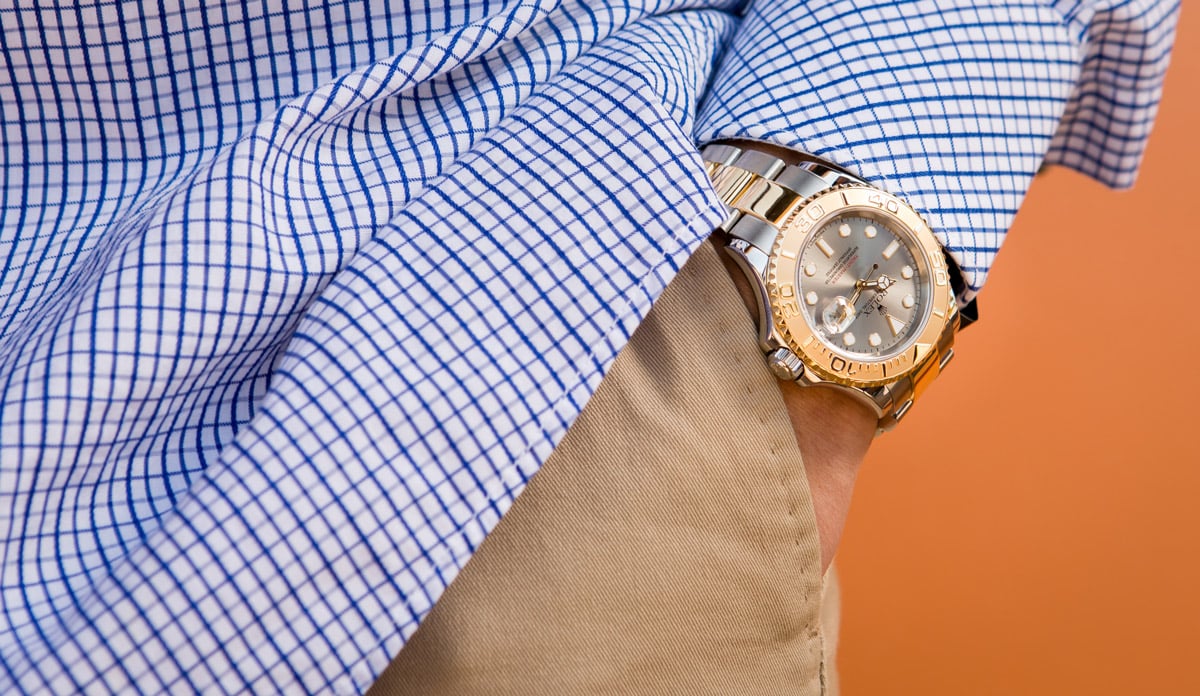 Rolex crafts their watches with only the best ingredients.

A Change in Material

In addition to being easier to find, pristine to lightly used examples of the reference 16623 will come at significant savings over what they previously sold for when they were purchased brand-new from their respective authorized dealers. Much like virtually every Rolex watch that is craft from precious metals, retail prices for the Yacht-Master come with high premiums that quickly taper off in the pre-owned market. 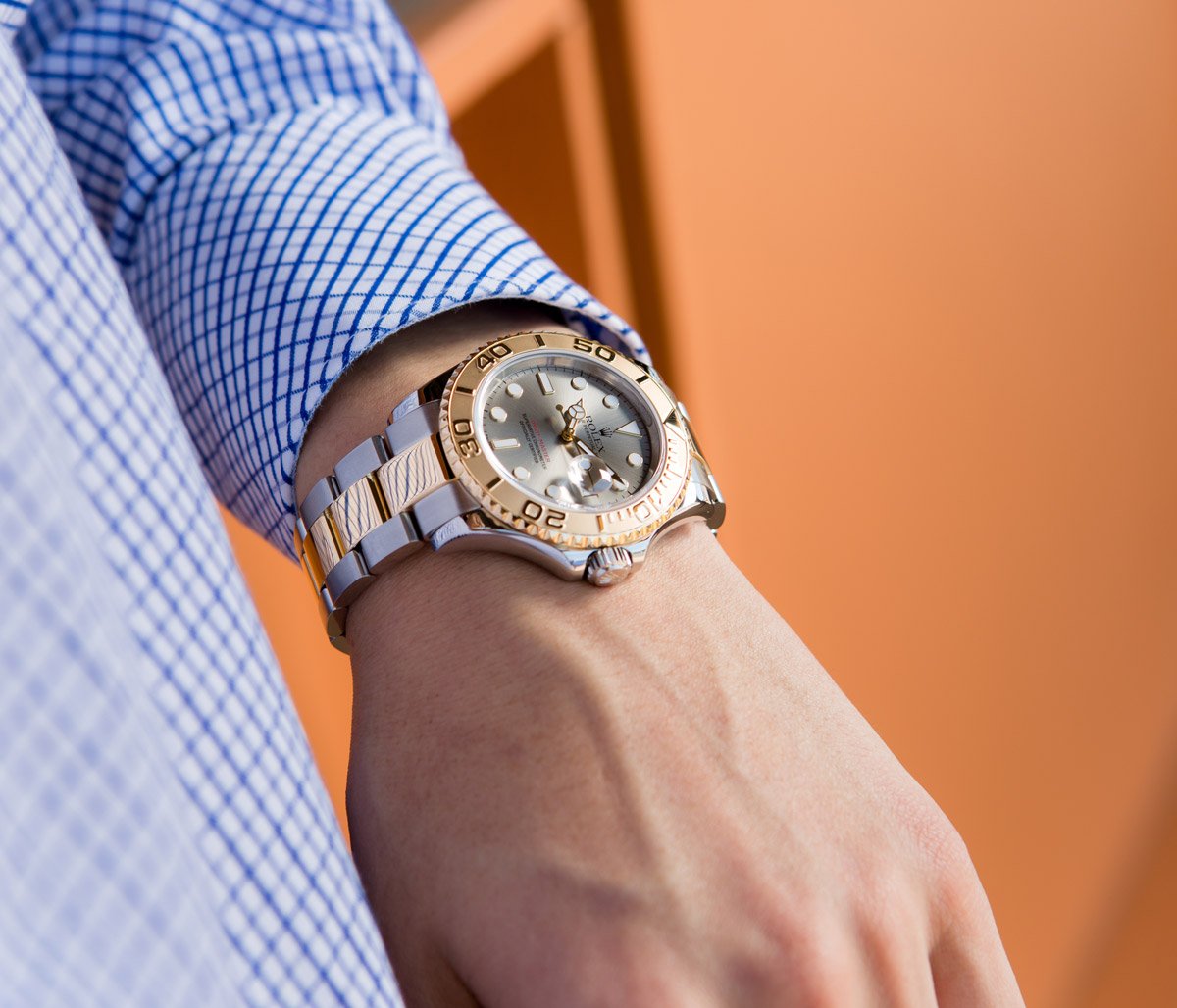 The Yacht-Master 16623 is sure to be a common counterfeit in the future for its simple look and massive success.

Like many other highly recognizable Rolex watches that do not contain any specific or proprietary complications in their movement, the reference 16623 will be a popular target for counterfeiters. All of the normal rules for spotting a fake Rolex apply to the reference 16623 Yacht-Master, so whenever attempting to verify authenticity, always examine the dial, the reference/serial number engravings, the bracelet (and its accompanying markings), the 18-karat gold bezel, and (if possible) the movement.

Additionally, the reference 16623 Yacht-Master uses solid, 18-karat yellow gold for the entire bezel and center links of the bracelet. Although counterfeiters are getting increasingly better at replicating the miniscule details of Rolex’s most famous designs, it would be cost prohibitive for them to use solid gold in the construction of a fake timepiece. It may sound obvious, but whenever purchasing a reference 16623 Yacht-Master, always verify that the yellow gold components on the watch are actually made from solid, 18-karat yellow gold. 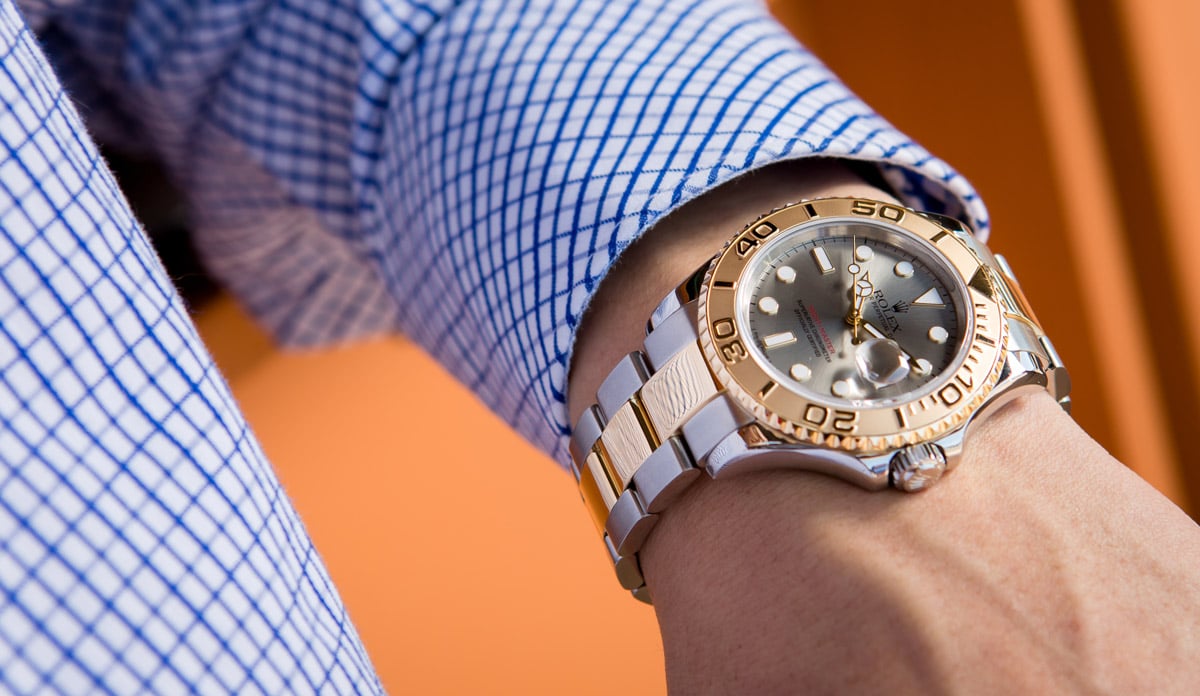 Now, is the Yacht-Master 16623 worth it? Leave your thoughts in the comment section.

The Yacht-Master line of watches is an accurate representation of what a large portion of the Rolex brand has grown to represent: high-end, yet practical, luxury timepieces with an unmistakably sports-oriented design and aesthetic. Although Rolex originally made a name for itself producing high-end, precision tool watches, the company has ultimately evolved into one of the most recognizable luxury brands on the planet. The combination of stainless steel and yellow gold on the reference 16623 Yacht-Master is an iconic Rolex look that increases the accessibility and practicality of the original Yacht-Master without compromising any of the watch’s ultra-luxurious, yet sports-oriented appearance. So yes, the Yacht-Master 16623 is worth every penny and then some.