The spring auction season for luxury watches just wrapped up in Geneva a few days ago. For Rolex enthusiasts, it’s an exciting time to see what kind of records the leading Swiss watch brand will achieve on the auction block. Big new was, of course, the record-breaking Bao Dai Rolex that sold for over $5 million at the Phillips’ Geneva watch auction. However, Christie’s had their own Rolex record-breaker with a very unusual Submariner that sold for $628,572 (CHF 631,500) at their Rare Watches and a Rolex Afternoon sale on May 15, 2017 in Geneva. In fact, this is now the most expensive Rolex Submariner to be sold at auction. Let’s dive in for a closer look. 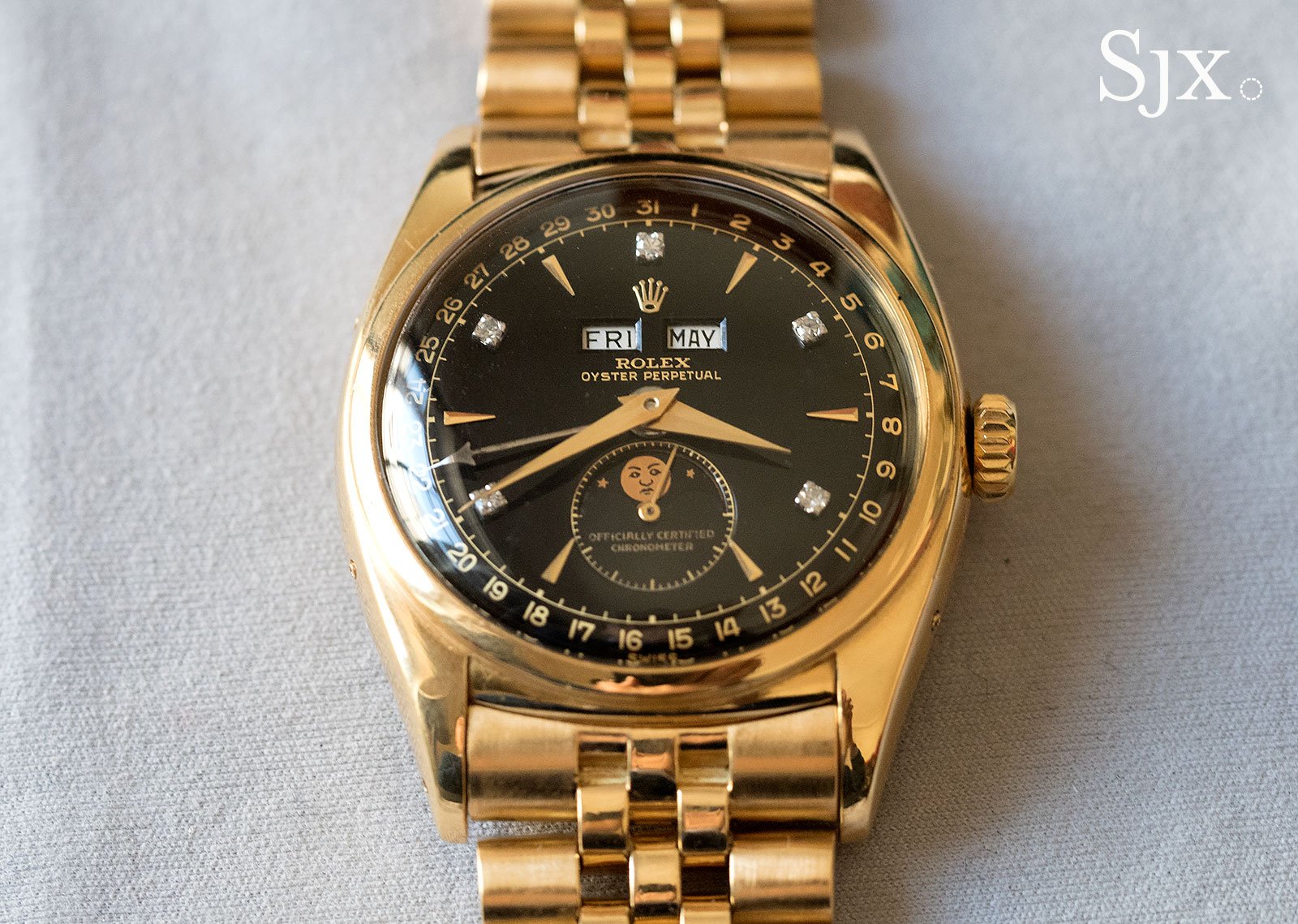 The record-breaking Bao Dai was recently sold as the most expensive Rolex. (Credit: SJX)

There was plenty of buzz around this particular Submariner ref. 1680 prior to the Christie’s sale due to its unorthodox design. While it carried the 1680 reference number, it’s actually unlike any other ref. 1680 Submariner. This is because it was a prototype from 1973. A vintage white Gold Submariner is unlikely to make a reappearance.

The most expensive Submariner is a ref 1680. (credit: Christie’s)

The watch has an 18k white gold 40mm case with a revolving white gold bezel. The engine-turned bezel is more akin to what we see on Turn-O-Graph timepieces from the era rather than Rolex Oyster Perpetual Submariner watches. The case houses a blue glossy dial with the nipple hour markers typically used on gold Submariner and GMT-Master watches during that period.

Just as interesting as the material and bezel, is the bracelet style. Rather than the customary Oyster bracelet, this particular Rolex Oyster Perpetual Submariner ref. 1680 prototype sports a President bracelet! In white gold! With bark accents on the center links! Talk about a break from the Submariner design aesthetic.

The White Gold Submariner that Never Was

This 18k white gold Rolex Oyster Perpetual Submariner ref. 1680 prototype is one of only three known to exist—another blue dial version and a black dial version. This trio of prototypes—with no serial numbers—never made it to production. It’s interesting to note that the first white gold Submariner finally arrived 35 years later with the Submariner ref. 116619, which made its debut in 2008. 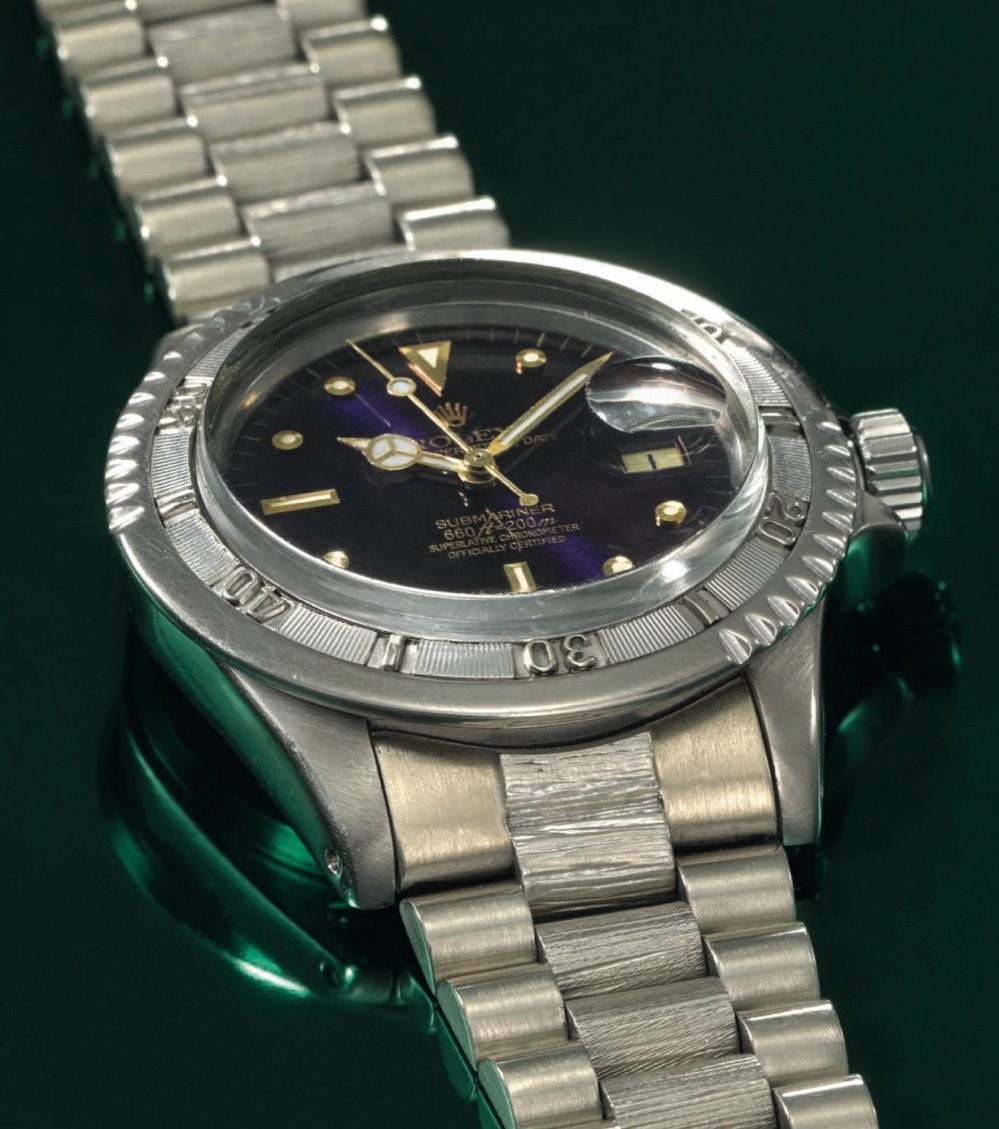 Due to its rarity, peculiar design, and a peek into a Rolex “mockup,” it’s not surprising that it achieved such a high selling price. The vintage ref. 1680’s record-breaking price is actually about 15% above the pre-sale estimate.

An incredible part of the history of the Rolex Oyster Perpetual Submariner and the company at large, this ref. 1680 now holds the crown for the most expensive Submariner ever sold. The record was previously held by the Submariner ref. 6538 “Big Crown” of James Bond fame. That was sold for $571,723 (CHF 562,000) at Phillips’ Geneva auction in November 2016. 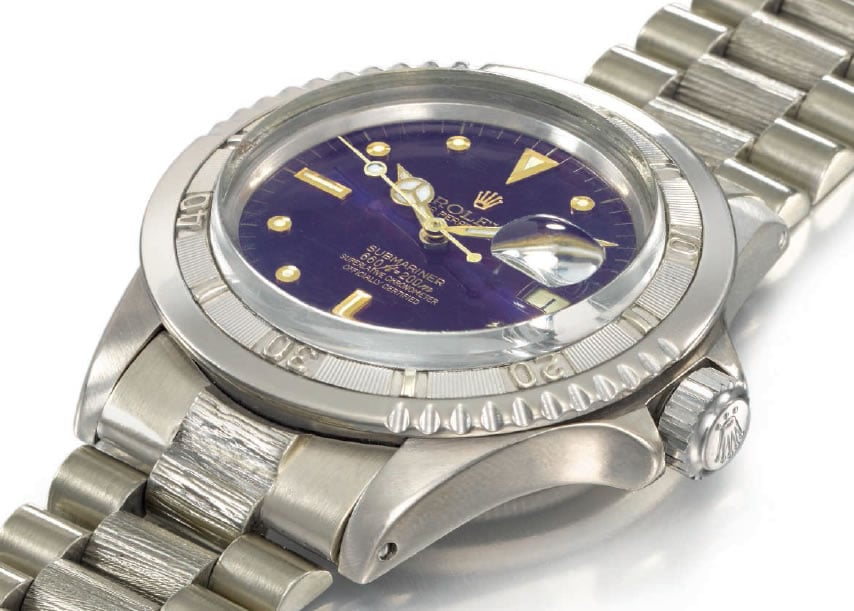 Due to its rarity, peculiar design, and a peek into a Rolex “mockup,” it’s not surprising that it achieved such a high selling price. (credit: Christie’s)

We’ll be keeping our ear to the ground to see how long this Rolex Oyster Perpetual Submariner will hold its most expensive Submariner record for. What do you think of the white gold Submariner ref. 1680 prototype? Do you think it deserved that record-breaking selling price? Chime in on our comments section below.