Following the recent release of the revamped men’s OMEGA Constellation 39mm collection, OMEGA now adds larger 41mm models to the mix. Aside from the bigger sizes, the new Constellation 41mm watches also benefit from a sportier design and a more powerful movement. Let’s get a closer look at the latest version of the 1980’s cult favorite.

The Origins: The OMEGA Constellation Manhattan 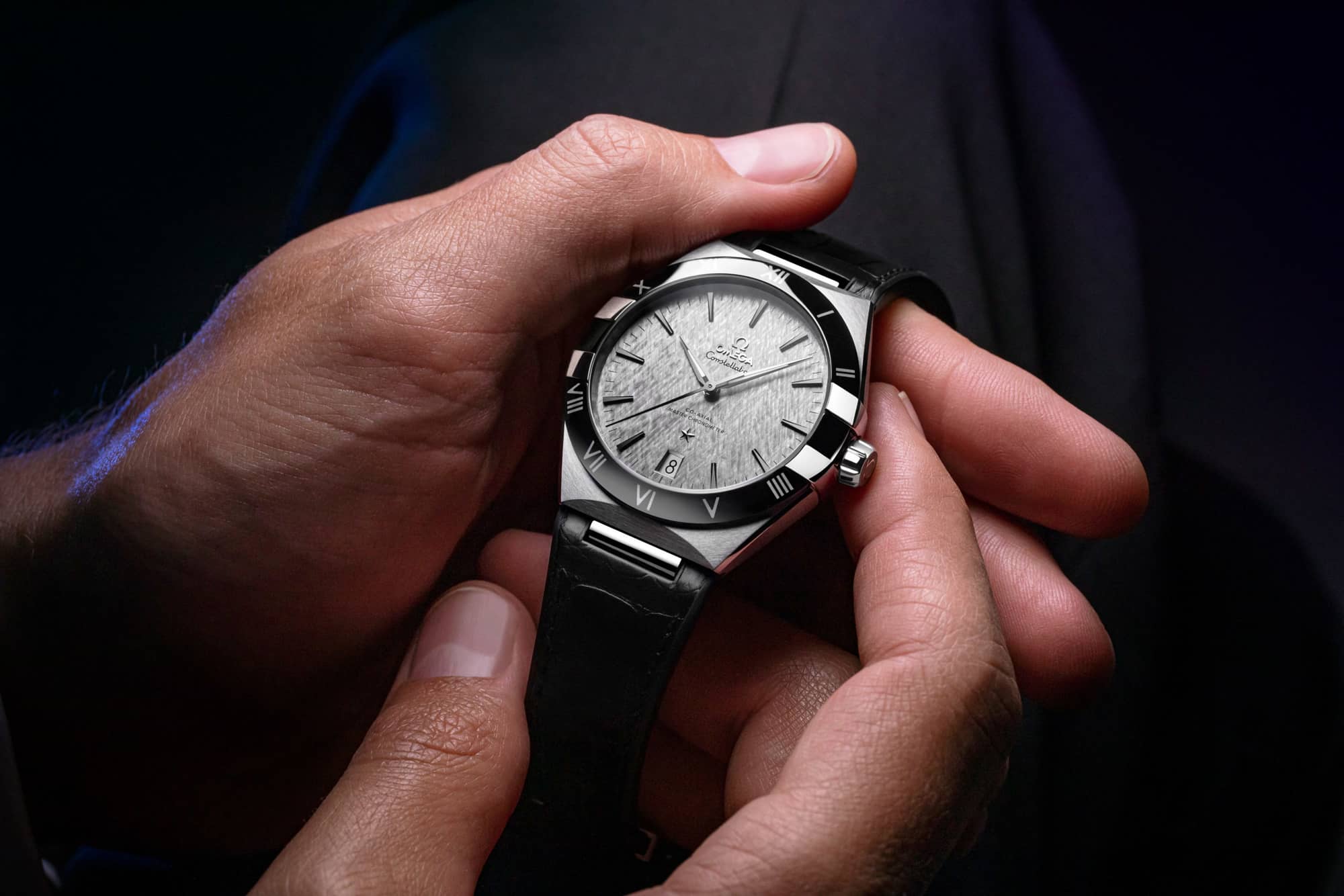 Instead of a traditional bezel to hold down the crystal, Carol Didisheim used four clasps – a pair for each side of the case. These four clasps, known as “claws” (or “griffes” in French), became a defining design detail of the then-new Constellation. Other signature features of the Constellation Manhattan included a barrel-shaped case, an integrated bracelet, and Roman numerals. The first Constellation Manhattan had an ultra-flat sapphire crystal with a painted border complete with hour markers.

The Constellation watch evolved over the years. For instance, a bezel was added to the watch but still furnished with four claws. Additionally, the Roman numerals moved from the dial to the bezel. The Constellation collection expanded to include models powered by mechanical movements to sit alongside the original quartz one. Despite these modifications, the Omega Constellation remained as one of the industry’s most recognizable designs. The collection exploded over the following decades, welcoming a slew of models for men and women in varying materials and sizes. 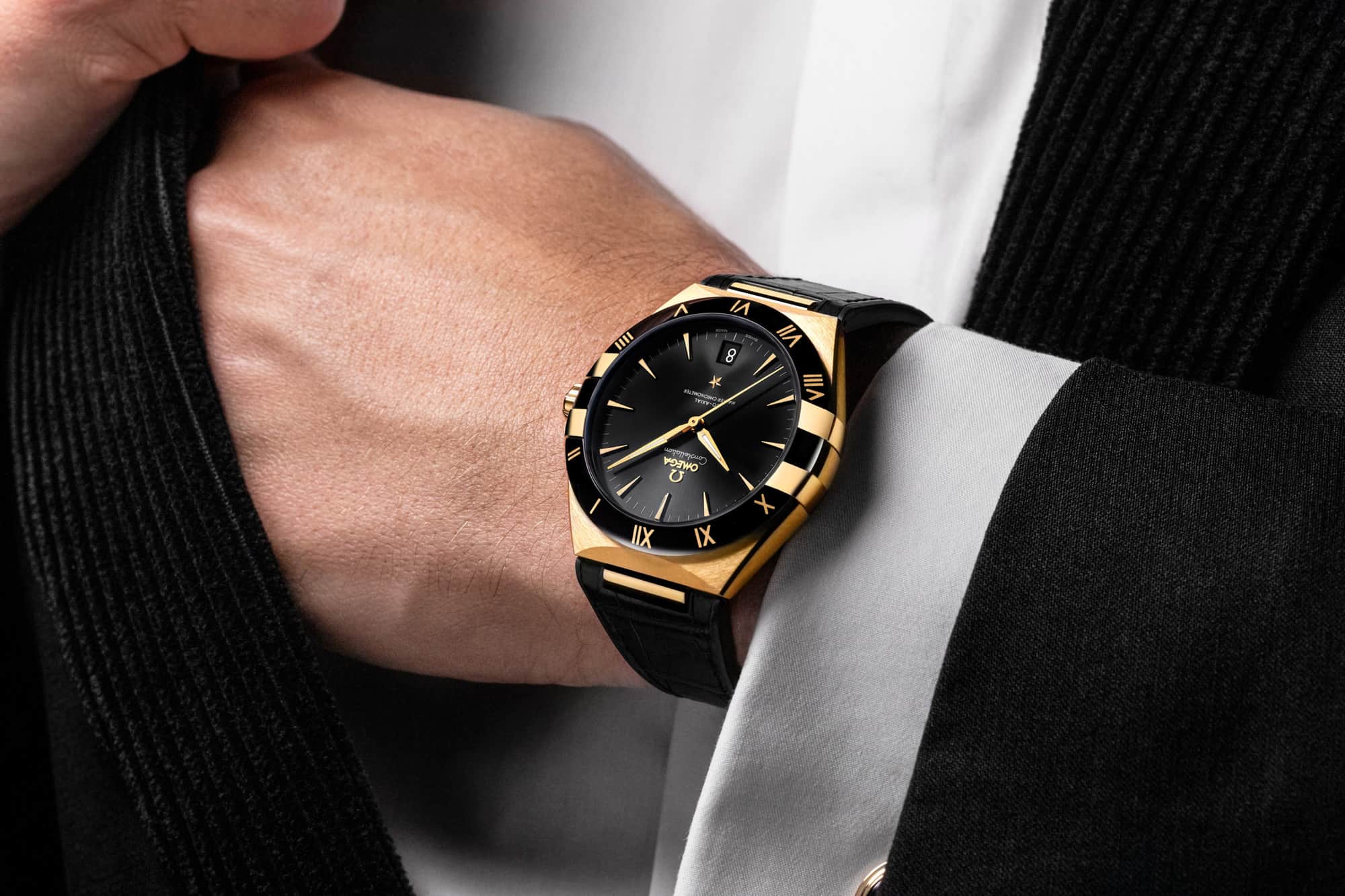 For 2020, Omega subtly redesigned the men’s Constellation with beveling along the edges of the case and claws and added a reshaped winding crown. The dials of the revamped Constellation are home to slimmer hands and hour markers inspired by the triangular facets of the Freedom Tower in Manhattan. There’s also a trapezoidal date window under the customary star on the dial. These redesigns were first seen on the 39mm Constellation models and now they’ve made their way to the 41mm iterations.

The 41mm Constellation watches are available in stainless steel, 18k yellow gold, 18k Sedna gold, or a two-tone combination of Sedna gold and steel. All except for one model are topped with polished ceramic bezels, which mimics the look of the darken crystal edge of the original 1982 Constellation Manhattan.

Unlike those versions with metal bezels, the ceramic bezels, which come in blue or black, on these Constellation watches provide a striking contrast to the four metal claws. Depending on the specific model, the Roman numerals on the ceramic bezels are produced in either Ceragold or Liquidmetal. In addition to brushed blue or black dials to match the bezels, Omega also offers a silk-embossed rhodium-gray dial on some models.

The use of straps on the Constellation 41mm watches rather than the familiar integrated metal bracelets is a design departure from most previous versions. Yet, the leather straps (which include an anti-bacterial rubber lining) add a fresh touch and casual vibe to this Omega icon. There’s also a decorative metal link that connects the strap to the case. But for the purists, Omega offers the option of combining a 41mm Constellation with any of the metal bracelets (or full leather straps without a rubber inlay) currently available in the Constellation 39mm lineup. 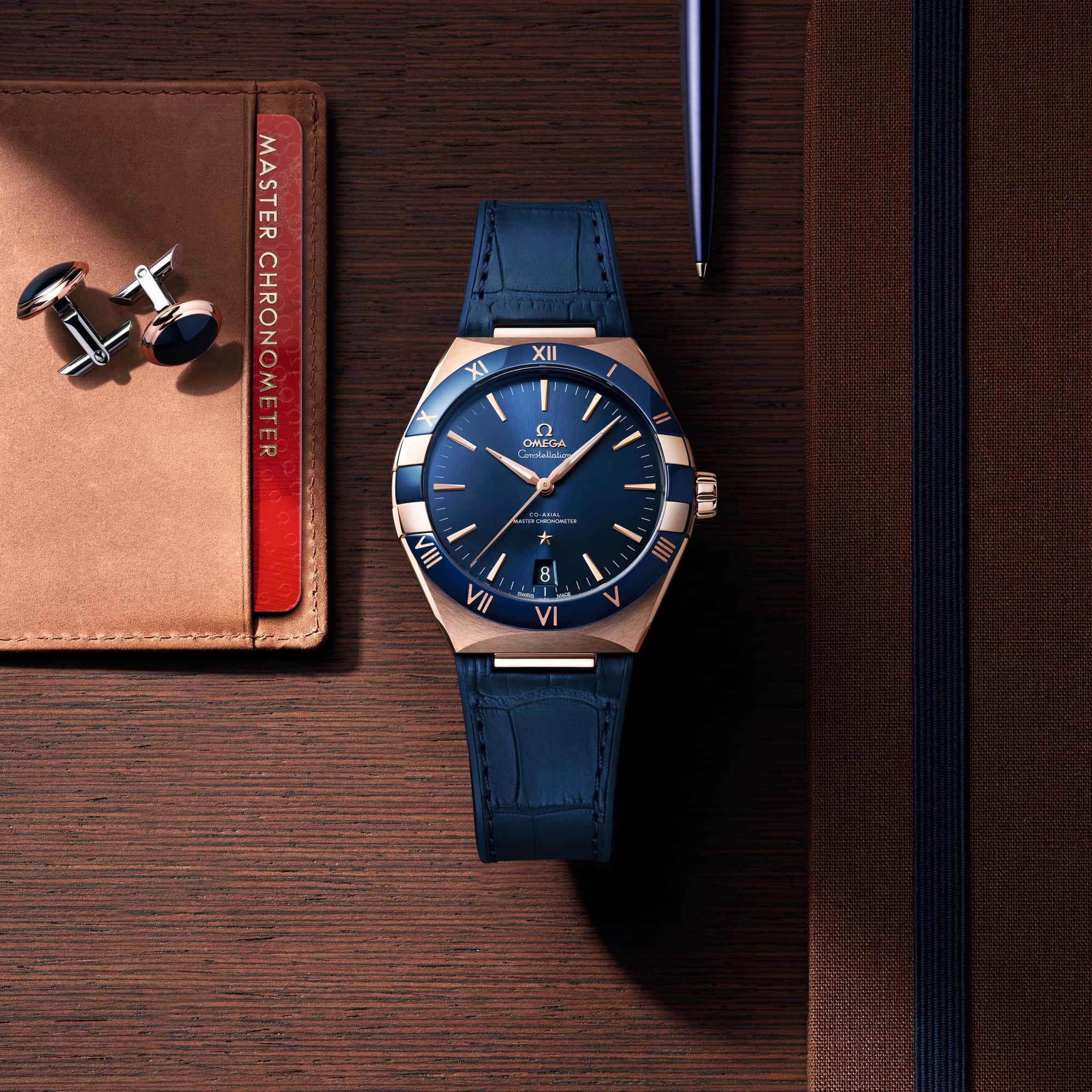 This wouldn’t be a new Omega watch without the addition of a new-generation Master Co-Axial movement. The steel Constellation 41mm watches run on Caliber 8900 while the gold versions are powered by the luxury-finished Caliber 8901.

Both automatic movements are antimagnetic to 15,000 gauss and supply the watch with 60 hours of power reserve. These METAS-certified movements can be seen via the sapphire exhibition caseback of the Constellation 41.

The new Omega Gent’s Constellation 41mm watches are expected to be available in stores by August 2020, and prices will range from $5,850 for the stainless steel model without a ceramic bezel (the only one among the new generation of 41mm models that does not have a ceramic bezel) all the way up to $20,400 for either of the full 18k gold versions. 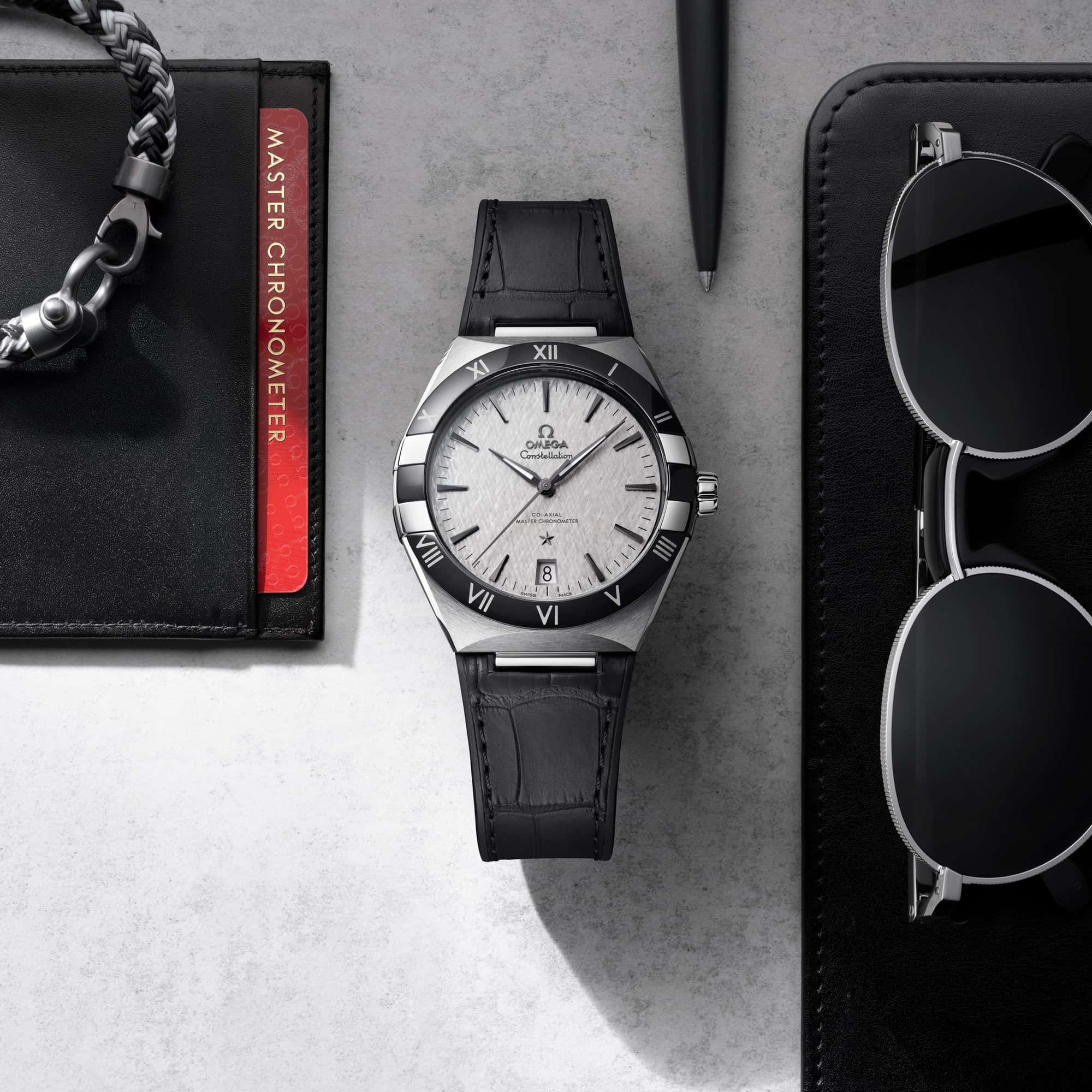 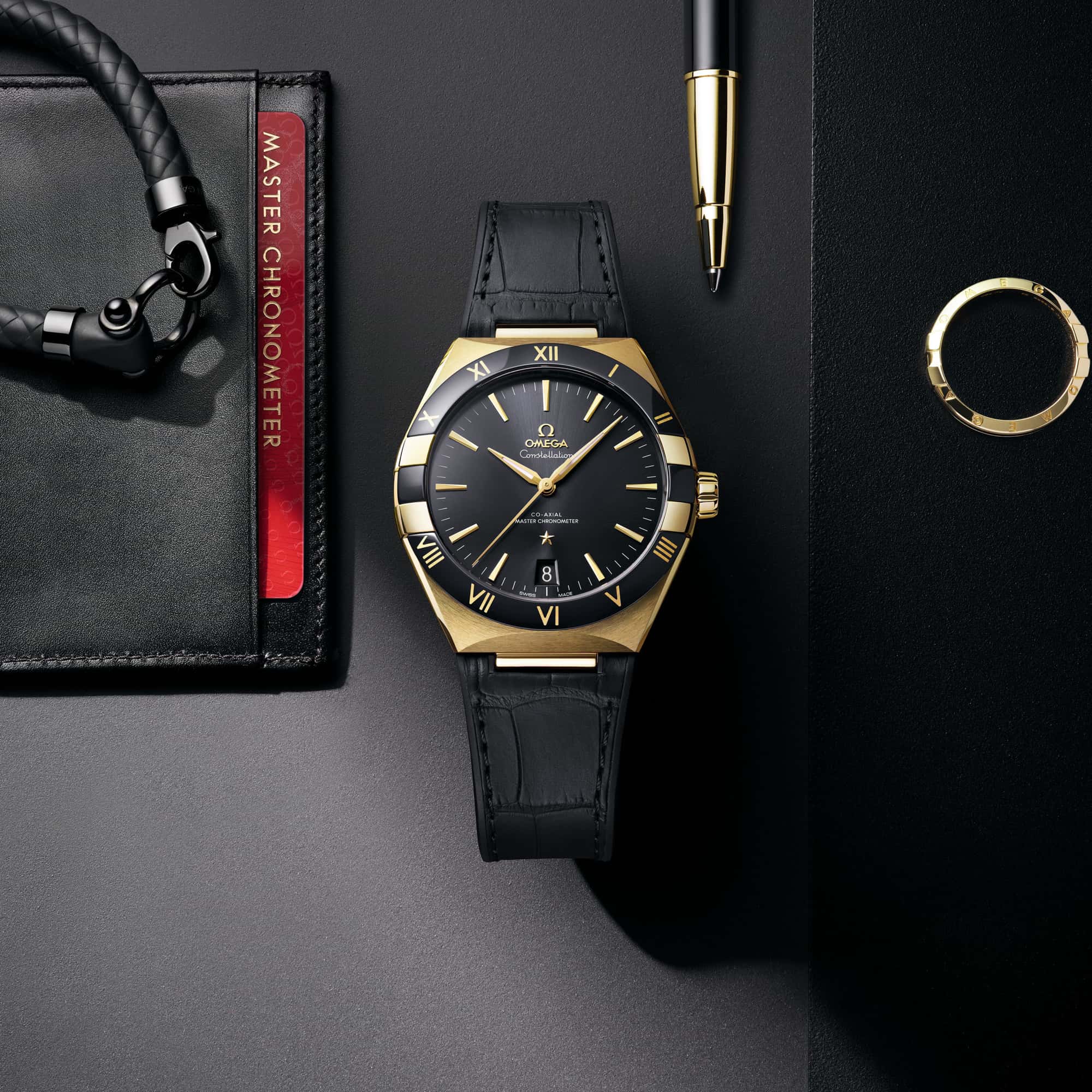