After nearly two full years of delays due to the global pandemic, the 25th film in the James Bond series, ‘No Time to Die’ is finally coming out in the United States. With that in mind, although none of us have actually been able to watch the movie over the last couple of years, we have been able to enjoy the 007-edition OMEGA Seamaster that Daniel Craig will be wearing on-screen in his final appearance as James Bond.

Crafted from grade 2 titanium and created with design input from Daniel Craig himself, the new Omega Seamaster Diver 300M ‘No Time to Die’ Edition has been incredibly popular with both watch collectors and 007 fans, and many collectors and enthusiasts are calling it the best James Bond Omega watch yet. Below is everything you need to know about the new ‘No Time to Die’ Omega Seamaster Diver 300M, including an unboxing video and even a copy of our initial take on the watch from back when it was first announced in December 2019.

Click here for a closer look at all of the James Bond Omega Seamaster watches. 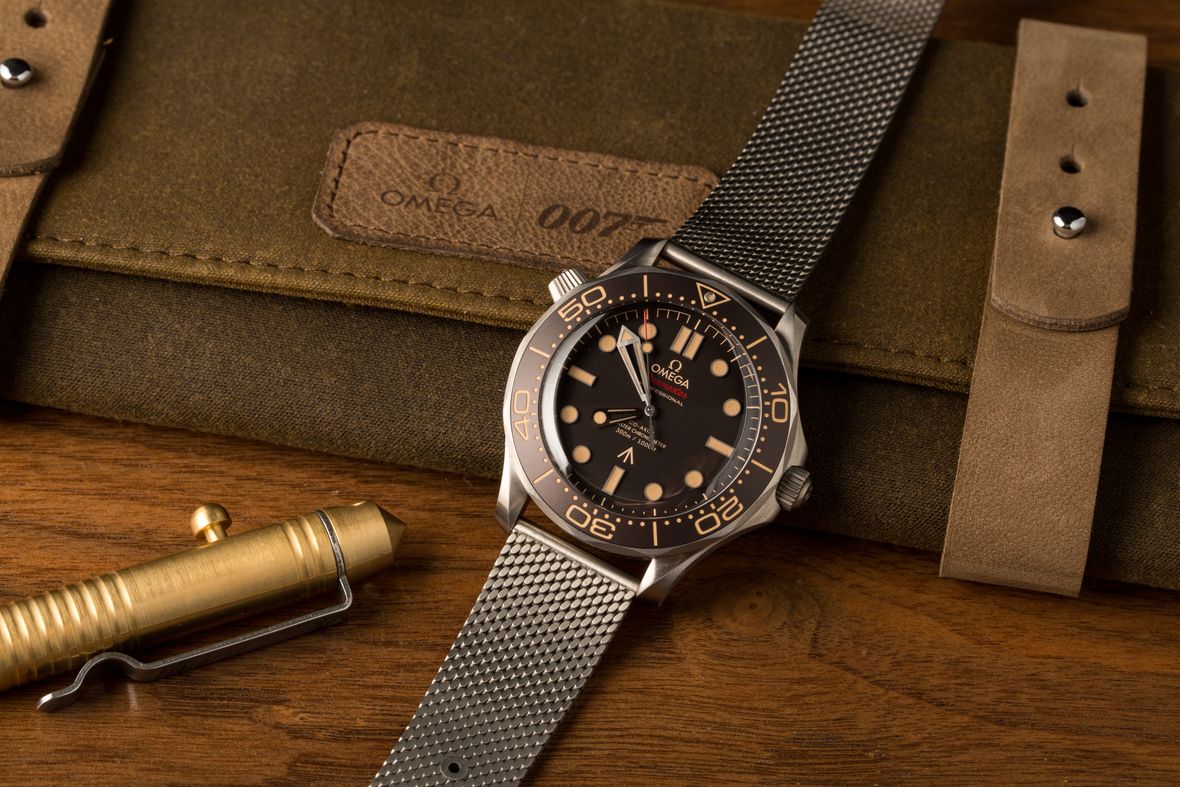 Agent 007’s wristwatch is one of the spy’s most iconic gadgets, but James Bond creator Ian Fleming actually spent very little time discussing Bond’s watch in the original books. Although he does mention that Bond wears a stainless steel Rolex (and Fleming himself owned and wore a Rolex Explorer ref. 1016 in his personal life), there is no mention of it having any secret spy features such as the laser beam or remote detonator switch.

Although it was a Rolex Submariner that first appeared on Sean Connery’s wrist during the original James Bond films from the 1960s, Agent 007 has worn many different watches over the years. With that in mind, ever since Omega became the official watch of James Bond in 1995, it has been some form of Omega Seamaster that could be spotted on his wrist during the various movies.

The original model selected for Bond was the Omega Seamaster Diver 300M, and Pierce Brosnan wore some variation of it during every one of his four appearances as Agent 007. However, ever since Daniel Craig has assumed the role, he has worn a wide variety of other Omega Seamaster watches, including models from both the Planet Ocean and Aqua Terra collections. For his fifth and final appearance as James Bond, Craig will be returning to his character’s roots and wearing a Seamaster Diver 300M – but this special 007-edition watch is anything but your standard Omega dive watch. 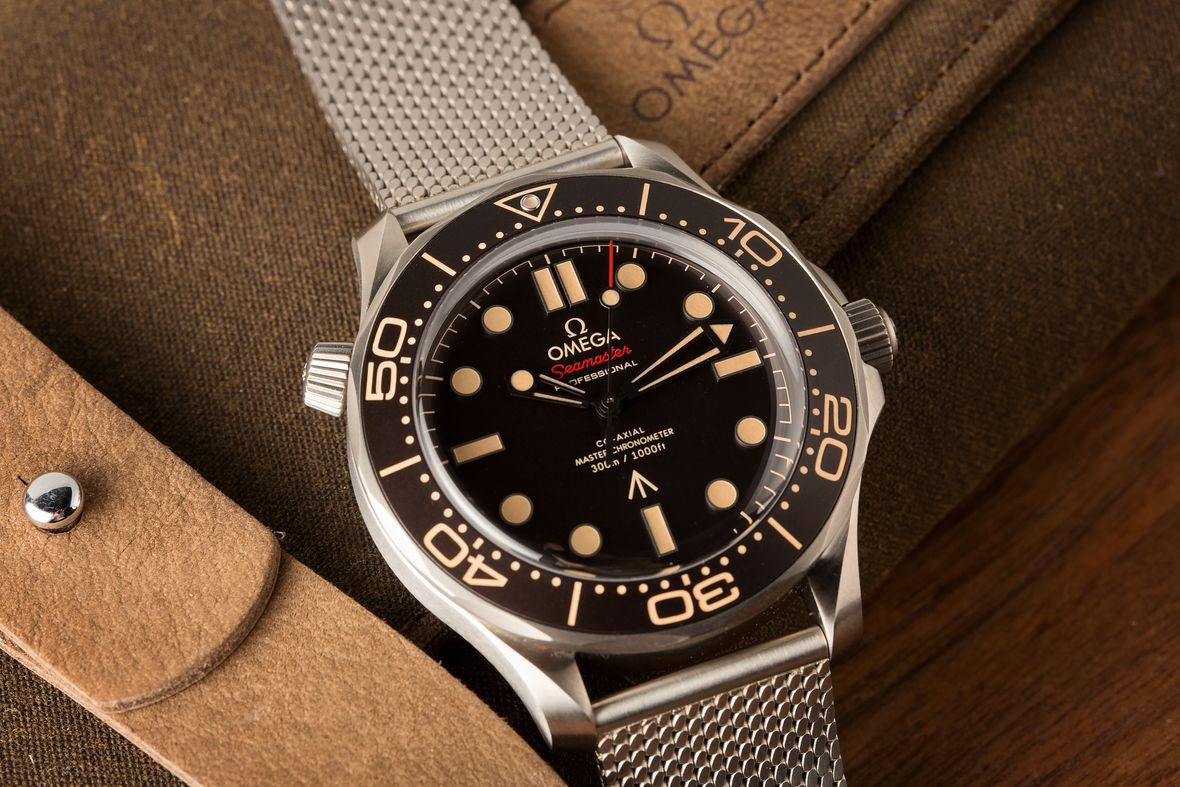 Just like the normal Omega Seamaster Diver 300M, the ‘No Time to Die’ edition features a 42mm case (with 20mm lugs) fitted with a rotating bezel, screw-down crown, and helium escape valve. However, while the standard model is crafted from stainless steel, the ‘No Time to Die’ edition is constructed from grade 2 titanium. Additionally, the sapphire crystal has a more pronounced dome (to mimic the appearance of the domed acrylic crystals found on vintage dive watches) and the dial and bezel insert are both made from brown ‘tropical’ aluminum and finished with colored lume to further play into its vintage-inspired aesthetic.

Internally, the Omega Seamaster Diver 300M, the ‘No Time to Die’ edition also features a slightly different movement than its standard counterpart. Unlike the normal version, which features a date window and 6 o’clock, the latest 007-edition is a no-date model and is therefore powered by the Co-Axial Caliber 8806 (rather than the Cal. 8800). With that in mind, despite their differences, both movements are METAS-certified chronometers and resistant to magnetic fields in excess of 15,000 gauss. Additionally, while the standard version is equipped with a display case-back, the ‘No Time to Die’ edition features a solid case-back that is finished with the proper engravings as if it were actually issued by Britain’s Ministry of Defense.

Unique to the ‘No Time to Die’ edition is its titanium mesh bracelet (although the watch is also available with a nylon NATO-style strap). The bracelet features an ingenious construction that allows users to adjust the length without having to remove any segments, while its overall aesthetic perfectly complements the watch’s vintage-leaning styling. Additionally, due to the mesh design of the bracelet and its full titanium construction, the overall feel on the wrist is incredibly lightweight and comfortable, without ever seeming even the slightest bit fragile or insubstantial.

Overall, the new ‘No Time to Die’ watch is immediately identifiable as a member of the Omega Seamaster Diver 300M family, but the numerous small differences ultimately add up to create a timepiece that is substantially different when it comes to its wrist presence and overall aesthetic. We covered most of the key details about it in our initial write-up from when it was first announced back in December 2019, and below you can find our first take on the Omega Seamaster Diver 300M ‘No Time to Die’ Edition. 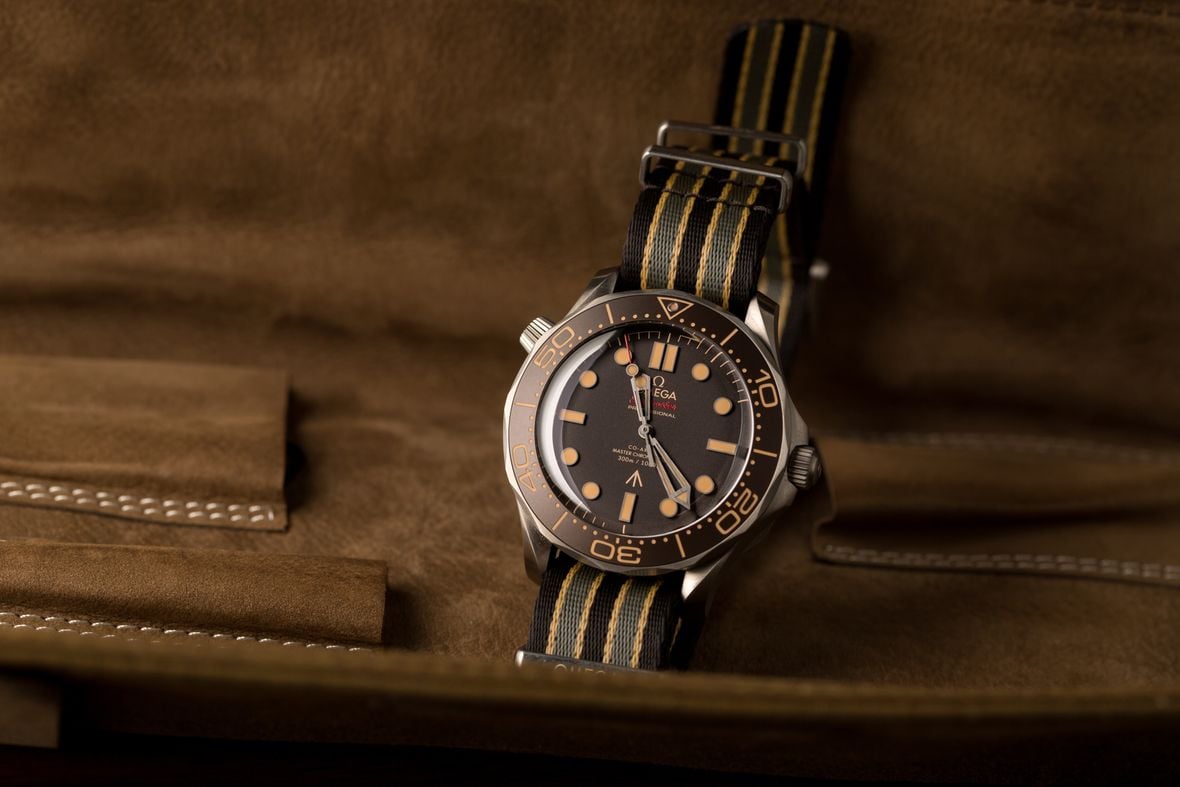 As much as we look forward to each James Bond film for the fast-paced action, cool cars, and snappy dialogue, we also eagerly anticipate the Omega watch sported by the elite secret agent. Of course, the Rolex era of the earlier Bond films will always stand apart, but over the course of the last 25 years, the cinematic franchise has built a strong tradition based around the Omega Seamaster Diver 300M.

James Bond has been sporting an Omega Seamaster since 1995’s Goldeneye when Pierce Brosnan had the job, and for the 25th Bond film, No Time to Die, due out in early April, Daniel Craig is reprising the role, marking 15 years since he first got his license to kill. Omega uses each film to introduce a new Seamaster Diver 300M, and the No Time to Die watch is one of the coolest 007 watches that they’ve ever made. 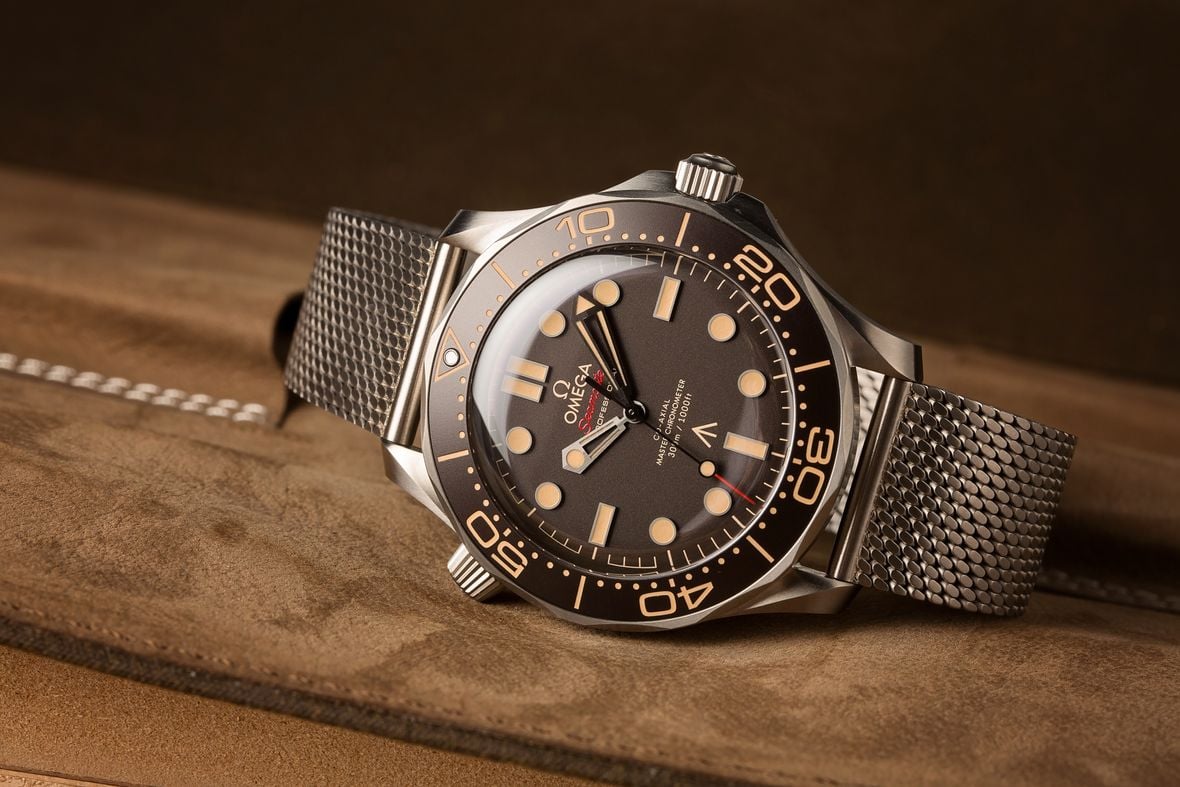 Dubbed the Seamaster Diver 300M 007 Edition, the 42mm watch combines retro looks thanks to an approximation of a tropical patina on its markers and numerals, with technical credentials thanks to the use of grade 2 titanium. The reference no. is 210.90.42.20.01.001 and it was designed with input from Daniel Craig himself.

The first Seamaster 300M Diver was released in 1993, and the early versions as seen in the Brosnan Bond films have become classic favorites among 007 fans. While this model remains true to the defining characteristics of the collection, this watch is a distinct evolution in style. The new Seamaster Diver 300M 007 Edition was “purposefully built with military needs in mind” according to Omega, to bring verisimilitude to the action scenes in the film.

The watch will be available on a titanium mesh bracelet or a striped NATO strap in dark brown, grey and beige, with 007 engraved on one of the keepers. Omega also says that “special new doming” of the sapphire crystal allowed this piece to be slimmer than the standard Seamaster Diver 300M models. It sports an aluminum dial with aged brown markers and aged lume on the hands, matched by the numerals on the unidirectional aluminum bezel. 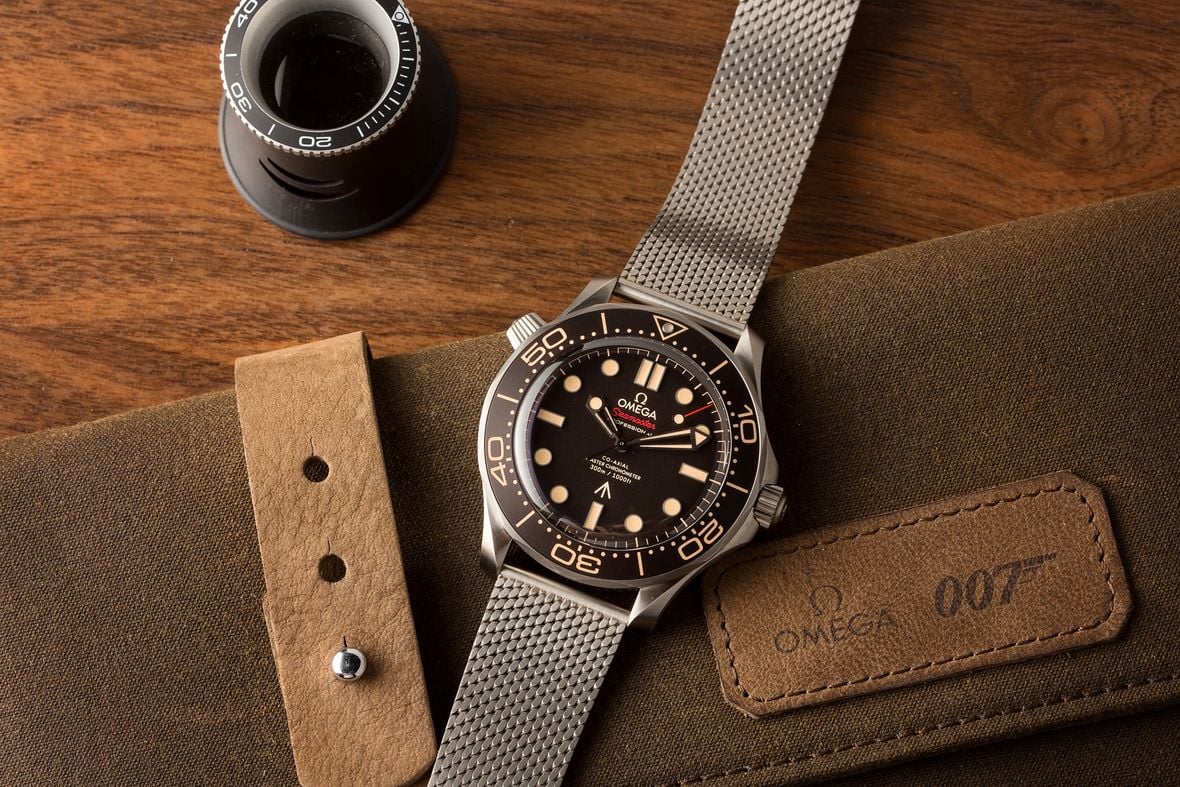 The caseback is engraved with a series of numbers that “follow the format for genuine military-issue watches.” There’s “0552,” a naval code-number, followed by “923 7697” denoting a diver’s watch, and the letter “A” signifying a screw-in crown. Then “007” is self-explanatory while the final number “62” refers to the year the first Bond film made its debut.

Omega’s patented Naiad Lock caseback system ensures that the engraved section is always in perfect alignment. The watch is powered by Omega’s Co-Axial Master Chronometer Calibre 8806 movement, and it is water-resistant to 30 bar (300 meters / 1000ft.) Additionally, the brown fabric presentation pouch also has a military air. The Omega Seamaster Diver 300M 007 Edition will be available to the public starting in February 2020 as a non-limited edition and will come with an official retail price of $8,100 for the version on the strap and $9,200 for the one with the titanium mesh bracelet.

“When working with OMEGA, we decided that a lightweight watch would be key for a military man like 007, “Craig says. “I also suggested some vintage touches and colors to give the watch a unique edge. The final piece looks incredible.” We concur, Mr. Bond. 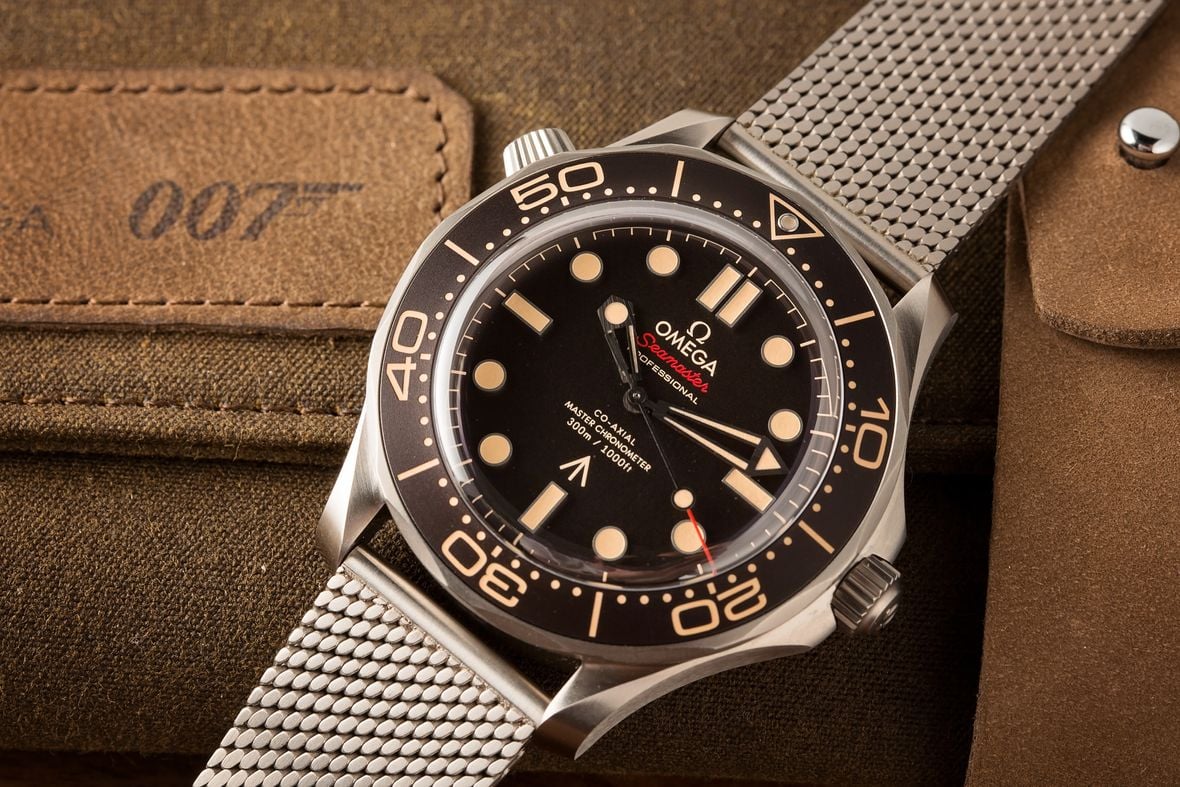