There’s no getting around the fact that the Rolex Datejust is one of the most important watches ever made. While its basic design calls back to another era completely, it has still managed to stay relevant in the modern world, its style remaining timeless now for three-quarters of a century.

The series has been through a number of generations, but each has evolved only subtly in outward appearance, forming one of the most cohesive families in all of horology. Inside, however, the Datejust has been kept at the very cutting-edge, its movements often leading the way in terms of what is possible with mechanical watchmaking. Despite being a legendary name in the Rolex canon, often the biggest surprise to people searching for their perfect model is how affordable the Rolex Datejust can be.

Below we’ve highlighted several examples that exemplify the quintessential Datejust spirit, all of them for less than $10,000.

Like other modern Rolex watches, the ref. 116234 is again forged from 904L steel and Rolex made use of its shimmering properties and gave the watch polished lugs, as opposed to the brushed type on the five-digit range it replaced. In addition, this time there is the added luxurious touch of a white gold fluted bezel. The model also gains a little bulk overall; nothing huge but just some extra wrist presence.

If there is a quintessential look, not only for the Datejust but for Rolex in general, this is it. The meeting of metals that is Rolesor – a two-tone blend of stainless steel and yellow gold, is one that the brand has made their own since they patented it way back in the 1930s. Since then, it has found its most effective home on the Datejust, an ever-present option that perfectly symbolizes the character of the watch.

The ref. 162XX range emerged in 1988 and was the one that first brought the Cal. 3135 movement to the model, replacing the former Cal. 3035. Additionally, it was the first generation to feature scratch-resistant sapphire crystals, rather than acrylic crystals like on the previous generation. Elsewhere, this is classic Rolex Datejust. 36mm in size and with a gold fluted bezel, winding crown, and central bracelet links, it was also the last series to use the traditionally proportioned case before Rolex updated the collection to feature thicker lugs, making the whole package a bit more understated than recent editions. 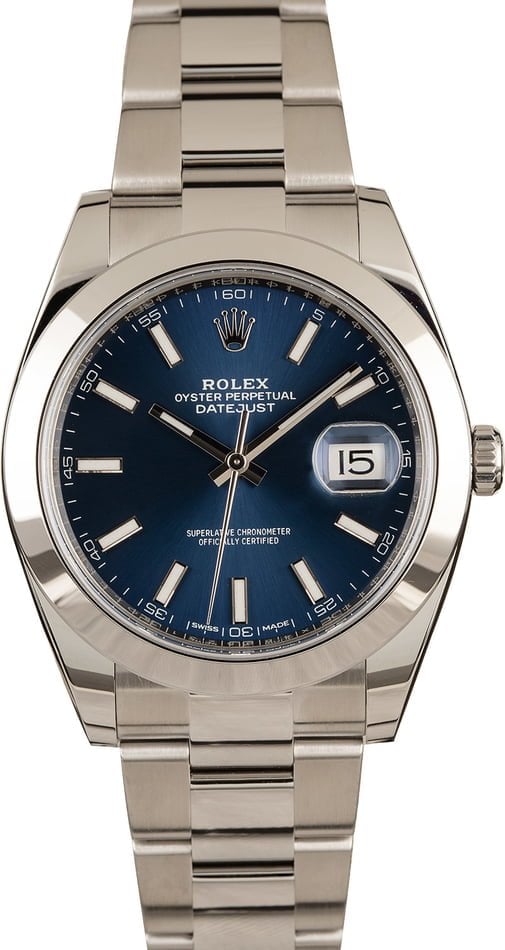 A revolution on its release in 1945 (the first waterproof, automatically-winding watch ever made to display a date function), over the next 75-years, the Rolex Datejust has settled into the role of the grand old statesman of the brand’s catalog. By far the biggest shakeup to its established routine came along in 2009 when the brand released a 41mm version, finally relenting to the contemporary public’s taste for bigger watches. The Rolex Datejust II topped the time-honored 36mm model, the largest available since the collection’s introduction, and gave the range its fifth size option. However, although it proved a highly popular addition, it was replaced in 2016 with a refreshed model with the same dimensions on paper, but one that stuck more closely to the original classic lines.

The following year, the first of the stainless steel, entry-level examples of the newly-christened Datejust 41 appeared, including the ref. 126300. Crafted from the incomparably strong 904L stainless steel, a metal usually found in the chemical engineering and aeronautical fields, it holds a polish like no other. Topped with a smooth bezel it has a pleasingly understated vibe, especially when paired with the three-link Oyster bracelet. On the intricate five-link Jubilee, it becomes a more formal option.

But the most significant upgrade is found under the hood, with the piece driven by the next generation Cal. 3235. A movement protected by 14 patents, some 90% of its components have been modified and enhanced over the previous caliber, the Cal. 3135 – a mechanism so good that it has been in service now for more than 30 years (it can still be found inside the current Submariner). Issued with the typically huge variety of different dial colors, the ref. 126300 is a Datejust for a younger audience – proof of its endless appeal.

Rolex’s Lady-Datejust is the brand’s best-selling collection of all time. Generally seen as the women’s luxury watch, it has been part of the portfolio since 1957 and represents a scaled-down version of the men’s model that still retains all the same elegant spirit as well as matching it for engineering prowess. The ref. 69XXX series launched in 1983 and was only the third generation in its long history, with the ref. 69178 as its top-of-the-line example. A 26mm 18k yellow gold case is topped with a fluted bezel. And like the ref. 16233 mentioned above, it also arrived mainly to debut a new movement with a Quickset function – in this case the Cal. 2135.

Rolex’s assortment of calibers built exclusively for their women’s watches tend to get overlooked next to those made for the men’s models, but they are often even more impressive. Held to the exact same standards for accuracy and resilience, they have to do it all in a much reduced space and with subsequently more demanding tolerances. The Cal. 2135, and its no-date equivalent the Cal. 2130, actually hold the record for the highest first-time pass rate of any movements tested by the COSC.

As you would expect, the ref. 69178 was given plenty of different dial options, with the champagne face matching the tones of the case and bracelet perfectly and proving especially popular. Alternatives such as black, white, silver, and grey gave a more restrained aesthetic, and a host of semiprecious stone pieces, with dials formed from mother-of-pearl, malachite, or lapis lazuli offered true one-of-a-kind exclusivity. There is no 26mm Lady-Datejust in the current lineup, giving the ref. 69178 an air of retro charm and, with prices remarkably affordable for the indulgence of a solid gold Rolex, it stands as something of a bargain on the pre-owned market.

Like many of the most successful names in the roster, the early life of the Rolex Datejust was fairly turbulent. The first few years of production saw it go through several different references in quick succession as styling and mechanical details were ironed out. The ref. 1601 emerged in 1959, some 14-years after the original watch made its debut, and really stands as the version which cemented what the Rolex Datejust should look like. So much so, in fact, that it wasn’t phased out until the end of the 1970s. In this era, Rolex’s numbering system wasn’t quite as regimented as it is now and so ref. 1601 covered a number of different models. All 36mm Rolesor pieces, the gold used could be yellow, white, or rose on a steel case with a fluted bezel. Additionally, it acted as something of a catchall number for the solid gold versions of each as well, so ref. 1601/5 was for the all-18K rose gold model, while ref. 1601/8 denoted 18K yellow gold, etc.

During its two-decade production run, the ref. 1601 went through two different movements; the initial examples used the Cal. 1565, beating at 18,000vph, before switching to the 19,800vph Cal. 1575 in the mid-60s. Both highly accomplished and well-respected calibers in the collector community, neither benefitted from a Quickset but still proved reliable and resilient timekeepers. This was also the series that really introduced the idea of such an enormous variety of dial colors, with everything from the most conservative shades to the brightly lurid on offer. And a feature beloved by all traditional connoisseurs, the faces were always pie-pan style, with a recessed outer edge that sloped downwards – resembling an upturned pie plate.

The ref. 1601 put the Datejust on the map, built-in vast numbers and in enough variety to appeal to anyone’s taste. It also represents arguably the most attractively priced model of any vintage Rolex, and as an entryway into the world of collecting, it doesn’t get much better than that.