The Most Popular Watches from the 1960s

The watch on your wrist can say a lot about your style and even your taste level. When it comes to luxury timepieces, it’s easy to get a little carried away. If a watch dripping in diamonds or boasting a robust 45mm case isn’t your thing, take a trip back in time and consider the elegance and class of 1960s horology.

The 1960s produced some of the most collectible and desired luxury watches in the world. Rolex had just developed the Submariner, GMT Master, Milgauss, and Day-Date in the 1950s and was hard at work improving upon their designs. Meanwhile, Omega was sending their Speedmaster to the Moon. This golden age in watchmaking brought us some of the most important timepieces in horology.

Read on for an in-depth review of some of the most popular 1960s watches. Many of the watches showcased here are also available for purchase during our 60’s inspired ‘Fresh Finds’ vintage Rolex auction: 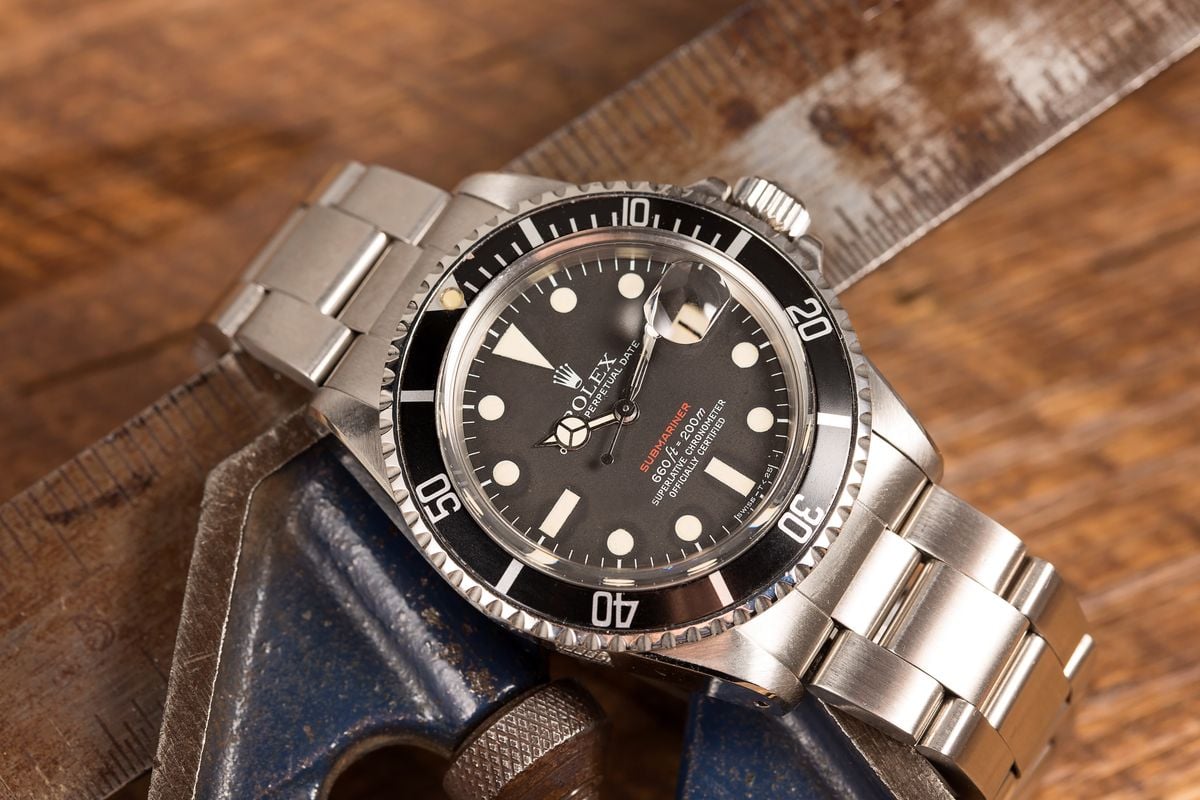 Click here to learn more about the Rolex Submariner.

Several of Rolex’s core models were released in the 1950s, including their first professional diver’s watch, the Submariner. Rolex built upon the design of the Submariner to include the date mechanism, which, by this time, had already become a staple of the brand’s portfolio. The date was initially left off the dial because there wasn’t a use for a date mechanism on a dive watch. However, as popularity for the Submariner soared, it just made sense to add it to the dial.

While there is still a dateless reference in production, the options with the iconic aperture on the dial remain the most successful. The ref. 1680, which was the first Submariner to display a date on its dial, is one of the most collectible and coveted Submariners ever produced.

Its value has increased significantly over the past several decades, with average prices ranging anywhere from $10k to $40k, depending on the watch’s rarity and condition.

During the reference 1680’s production, seven variations of the dial were produced. They are now referred to as Mark I through Mark VII. Examples of the variations between each Mark dial include meters or feet first, differences in font, and even the exact placement of various elements of the dial text. To many, the differences between the dials are nearly indistinguishable. But to the trained eye, each nuance between the many dial options is integral to the watch’s value and desirability on the secondary market. The dial options, many argue, is what makes the ref. 1680 such an exciting watch to collect and wear.

The first editions of the 1680 dial featured a red Submariner logo, earning the watch the nickname “Red Sub” Or “Red Submariner.” After the mid-1970s, the red log was swapped out for the white logo that is more commonly seen on the Submariner series today. The 1680 red logo Submariner remains one of the most prized editions of the reference 1680 among nearly every Submariner enthusiast.

With the addition of a date came a then-new movement in the form of the Caliber 1575. Aside from the date mechanism, this movement operates similarly to its dateless predecessor Caliber 1570. The movement is housed within Rolex’s patented Oyster case, which at the time of the ref. 1680’s production, offered water-resistance up to 200 meters and was fixed with an acrylic crystal. 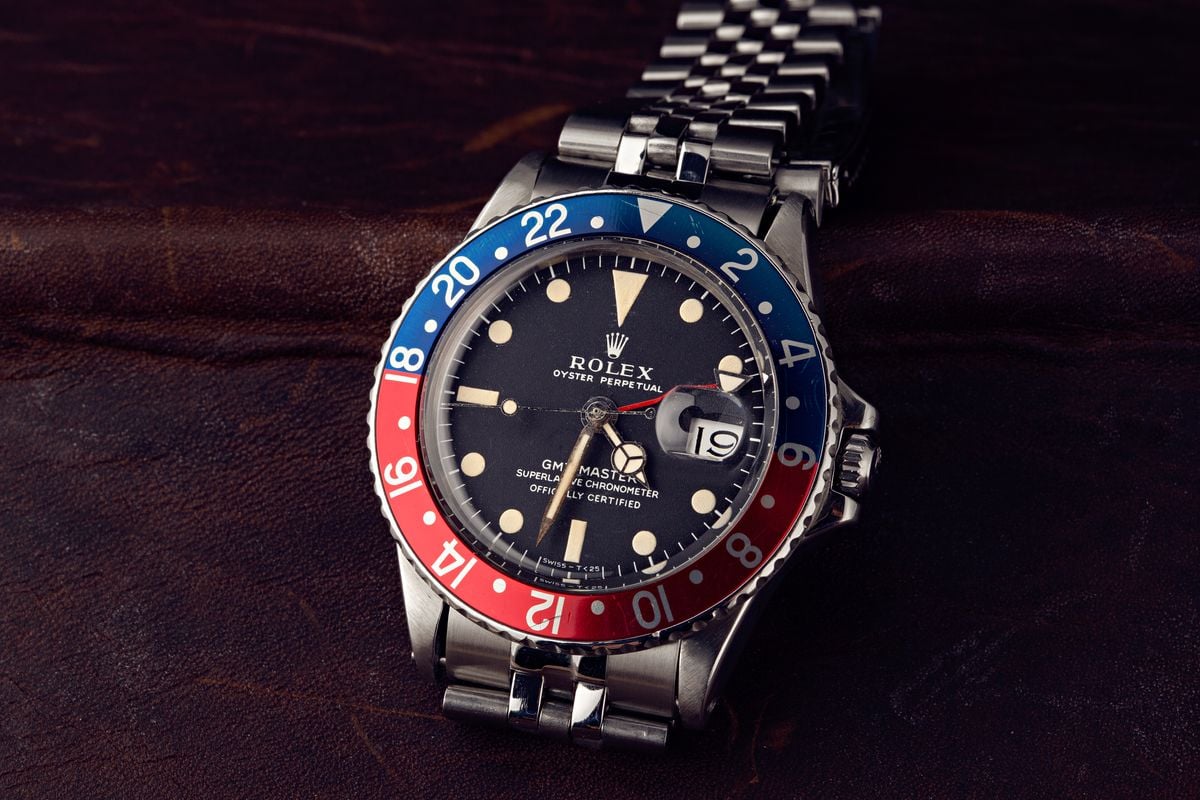 Click here to learn more about the history of the Rolex GMT-Master.

Another famous Rolex watch that is currently trending on the secondary market is the vintage GMT Master ref. 1675. Rolex released the pilot’s watch in 1954 via ref. 6542, aka the “Pussy Galore Rolex.” It only spent a couple of years on the market before it was replaced by reference 1675 in 1959. During its impressive 20-year production run, several upgrades were made to its design, making the GMT Master 1675 an enjoyable watch to hunt for. However, it can be a somewhat daunting task to find the exact 1675 of your dreams with so many variations to consider.

Until 1965, the ref. 1675 was powered by a Caliber 1565 Perpetual movement with 18,000vph and a 44-hour power reserve. This movement was eventually replaced with the Caliber 1575, which received a hacking seconds function, a 48-hour power reserve, and a higher frequency rating of 19,800vph. Both calibers include the GMT Master’s signature 24-hour hand for convenient, dual-timekeeping and are chronometer-rated.

The reference 1675 was produced with both a glossy and a matte dial. During the early years of its production, it sported a glossy dial with gilt printing. The first editions of the glossy dial also featured a chapter ring. Around the same time as the movement upgrade came the matte dial with white printing. A few years later, around the late 1960s, Rolex increased the size of the 24-hour hand to include a larger triangle tip for improved legibility. The most popular of these dial variants is the glossy dial topped with a small-tipped 24-hour hand.

Surrounding the case is the GMT Master’s iconic 24-hour bi-directional bezel. It features an aluminum insert, which replaced the Bakelite insert used on the ref. 6542. A few variations of the bezel were produced, including the highly coveted red and blue “Pepsi” edition, which also features fat font on earlier examples. Also available within the 1675 lineup are all-black bezels or the cult favorite Rootbeer bezel, the latter of which is often paired with a striking nipple dial.

Depending on the metal finish, year produced, and quality of the watch, you can add a ref. 1675 to your collection for between $10k and $35k. 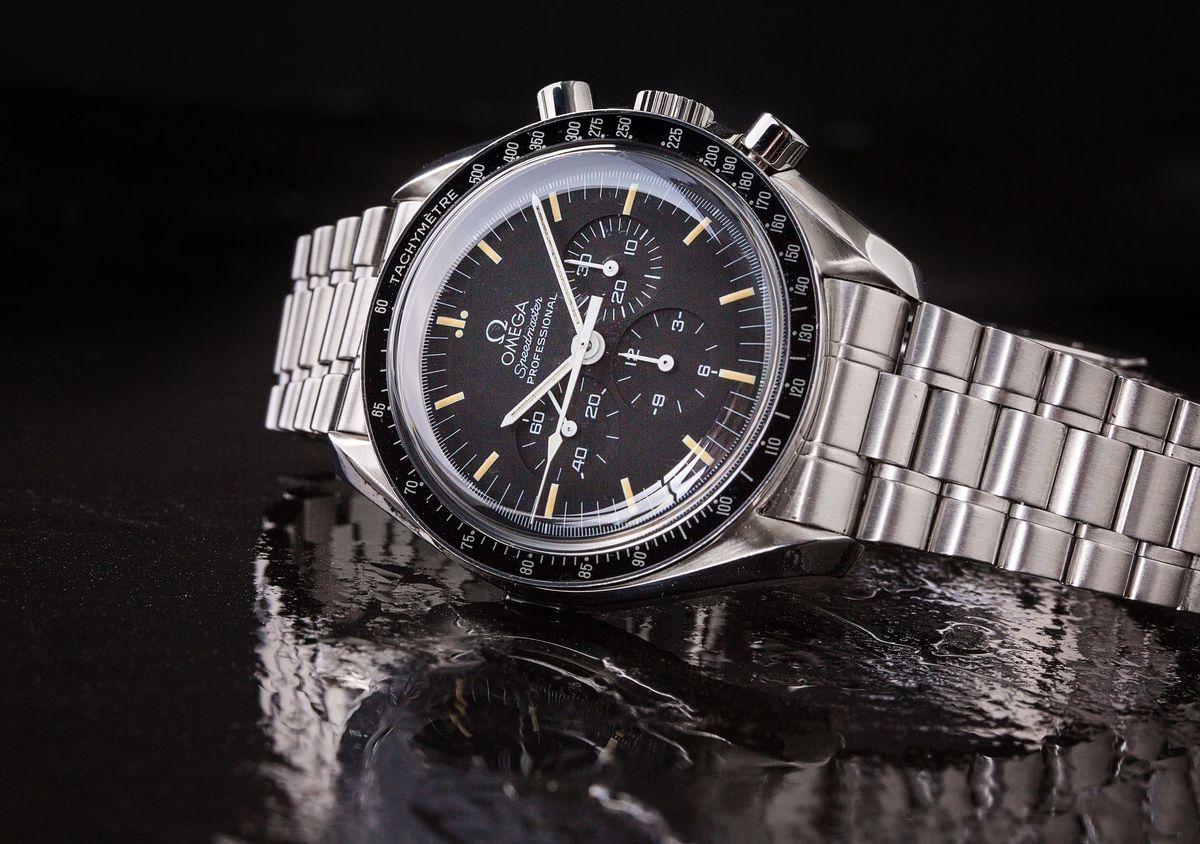 Click here to learn more about how NASA tested the Omega Speedmaster.

Whether you’re new to vintage luxury watches or desire a tool watch suited for both professional use and leisurewear, the Speedmaster will likely catch your eye. Since hitting the market in 1957, countless variations have been released. However, it’s hard to beat the classic, no-date editions powered by a manual-winding movement.

The ref. 105.003 is the epitome of cool vintage design with a slim Tachymeter bezel and black dial topped with traditional chronograph sub-dials. But what makes the reference 105.003 a popular collector’s item is its place within Omega’s history. As the story goes, the ref. 105.003 was the exact edition of the Speedmaster to become flight-certified by NASA, thus paving the way for the brand’s role as humankind took their first steps on the Moon. After 1969, the Speedmaster became known as the “Moon Watch.”

The ref. 105.003 is also known as the “Ed White” because it accompanied the astronaut as he performed the first American spacewalk. This Speedmaster is a legend and deserves a spot in any watch box. You can invest in an Ed White Omega Speedmaster ref. 105.003 for around $10k-$15k.

Introduced in 1964, the ref. 105.003 pre-dates the Speedmaster professional series. At first glance, one of its most distinguishing features is the straight lugs, which were replaced in later Speedmaster references in favor of twisted-style lugs. As is the case with most vintage watches, the older-style straight lugs are more desirable on the used market.

The ref. 105.003 replaced ref. 105.002 and featured larger side pushers and a slightly more “modern” dial design with slim hour and minute hands instead of the tapered alpha style of the ref. 105.002. It was also one of the last Speedmasters produced without crown guards.

The famed Caliber 321 movement is the powerhouse behind the ref. 105.003. During this era, the cal. 321 was revered for its precision. Much to the disappointment of many horology buffs, the movement was discontinued around the late 1960s in favor of Caliber 861, which was less expensive to produce. It is still very highly regarded today, with vintage watches powered by the legendary movement being among the most prized.

Omega redeemed themselves over 50 years later by resurrecting the Caliber 321 with a 55-hour power reserve and the same column-wheel design as the original. The 17-jewel movement that powers the ref. 105.003 boasts a frequency of 18,000vph and a 44-hour power reserve. 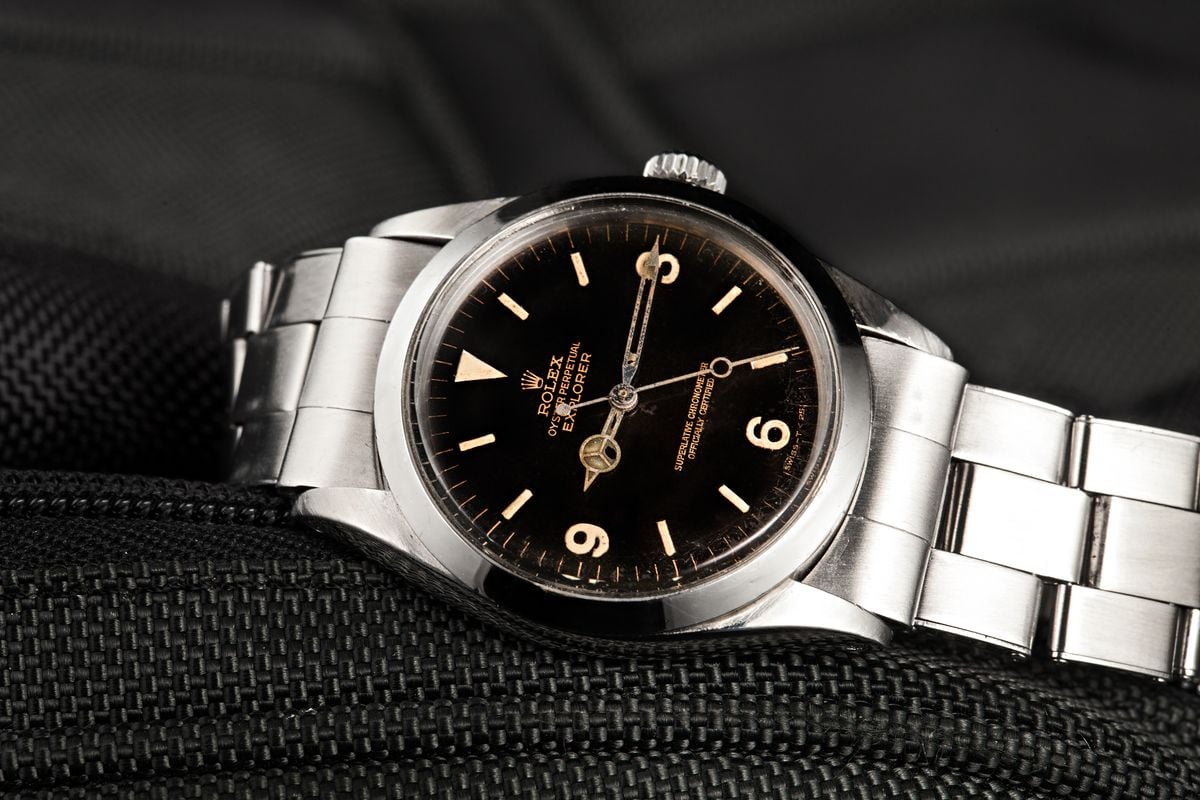 Click here to learn more about the reference 1016 Rolex Explorer.

The Rolex Explorer is another pillar model of the brand’s catalog. It is highly regarded for its simplistic yet rugged styling, making it a popular choice for anyone with a multi-faceted lifestyle. Rolex developed the iconic adventurer’s watch to celebrate the first successful climb to the peak of Mount Everest in 1953 by Tenzing Norgay and Sir Edmund Hillary.

Throughout its extensive production run, the Explorer’s core design remains the same with a smooth bezel, all-steel finish, and lumed display on the dial.

The ref. 1016 is, perhaps, one of the most famous editions of the Explorer. It remained in production from 1963 until the late 1980s, making it relatively easy to find on the secondary market. There are also several variants to consider while shopping for the ref. 1016. However, if you know what to look for, it’s possible to invest in a remarkable edition of the ref. 1016 without breaking the bank. There are several examples available on the market for around $14k.

Just like the GMT Master ref. 1675 mentioned above, the Explorer 1016 was first produced with a glossy dial topped with gilt printing. A matte black dial with white printing eventually replaced the glossy variant in the late 1960s. Depending on the year produced, the lume will also vary, with early examples featuring radium and older references utilizing Tritium. Among the rarest editions of the 1016 dial are the “Frog Dial” in which the Rolex crown somewhat resembles a frog foot, and the Space-Dweller, which was inspired by the astronauts of Project Mercury.

One Response to “The Most Popular Watches from the 1960s”