Bob’s Watches is proud to present the latest installment of our ‘Fresh Finds’ series of buyer’s premium-free auctions. Showcasing a curated selection of 4 incredibly rare vintage timepieces that have all been purchased directly from their original owners, this month’s ‘Fresh Finds’ vintage Rolex auction is all about 1960s sports watches!

Quartz timekeeping technology was not invented until 1969, meaning that the 1960s is often considered the final decade from the golden era of mechanical wristwatches. Prior to the advent of quartz movements, mechanical watches were at the forefront of timekeeping technology and they were regarded throughout the world as necessary tools, rather than luxury items, collectibles, or status symbols.

The purpose-built sport and tool watch models that first popped up during the 1950s matured and evolved into their own unique and highly-specialized designs during the 1960s. Created specifically for adventure sports and extreme environments, these iconic 1960s sports models represent the final generation of watches from the golden era of mechanical timekeeping. 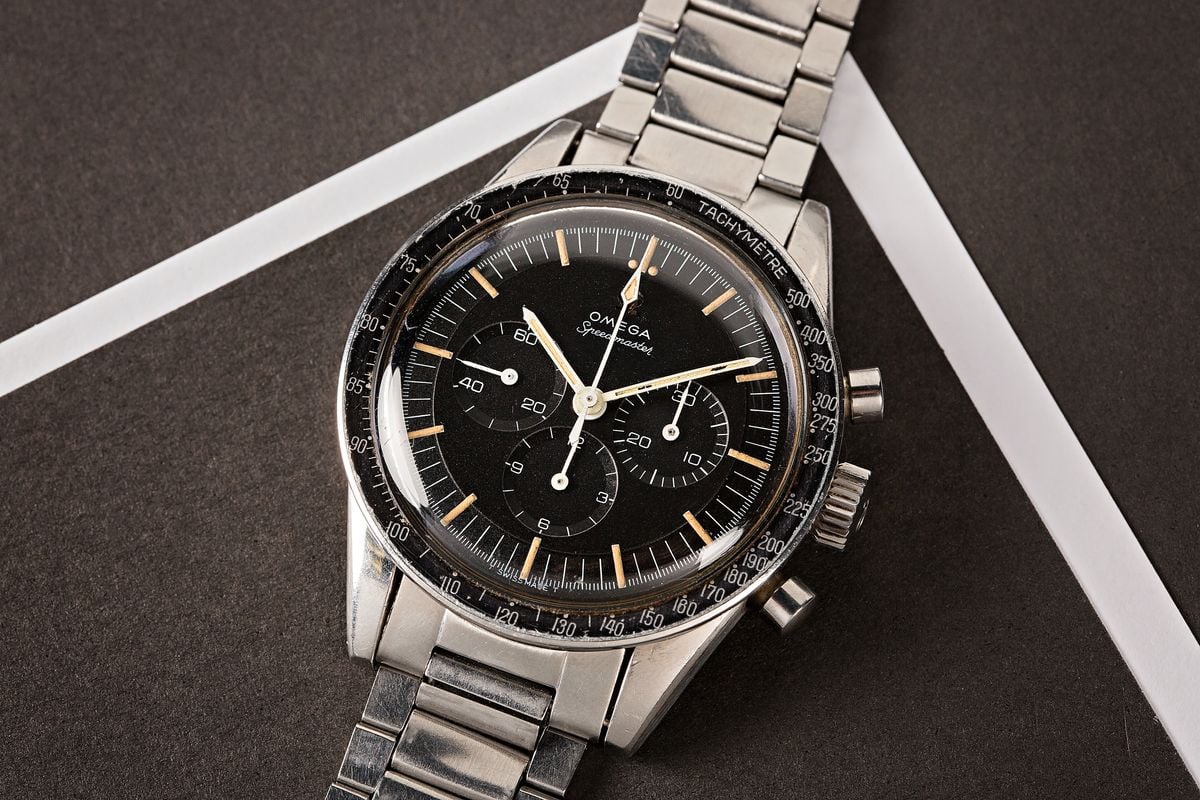 Check out our full history on the Omega Speedmaster right here.

While it is often the various Rolex sports watches that dominate much of the vintage market, the Omega Speedmaster can also claim to be one of the most famous sports watches in history. Becoming the first flight-certified watch of NASA in 1965 and then landing on the moon just a few later in 1969, there are few watches with the same sort of legendary pedigree as the Omega Speedmaster.

The Omega Speedmaster featured in our ‘Fresh Finds’ vintage auction is a ref. 105.003, which is the exact same model that first underwent NASA testing and won the Speedmaster its flight-certified status. This particular model dates back to 1965 and is what is known as an “Ed White” Speedmaster, as this reference was the personal watch of choice for American astronaut Ed White, who wore one on the outside of his spacesuit during the first American spacewalk as part of the Gemini 4 mission.

Visually distinct from all subsequent editions of the Speedmaster, the reference 105.003 remained in production for a relatively short period of time and represents the final evolution of the ‘Pre-Professional’ Speedmaster models with straight lugs. By 1969, Omega had switched to the lyre-lug style of cases, and the brand continues to use this case design on the modern Speedmaster watches that it produces today.

This particular example of the ref. 105.003 Omega Speedmaster is in excellent overall condition, and is complete with its original ‘Dot-Over-Ninety’ bezel (DON bezel), along with its original tritium dial and hands, which have developed a warm and rich patina – just like you would hope to find on a vintage 1060s Speedmaster. Fitted with a circa-correct Omega stretch bracelet, this ref. 105.003 is a well-preserved example of a vintage ‘Pre-Moon’ Speedmaster chronograph, and it perfectly represents the golden era of mechanical tool watches. 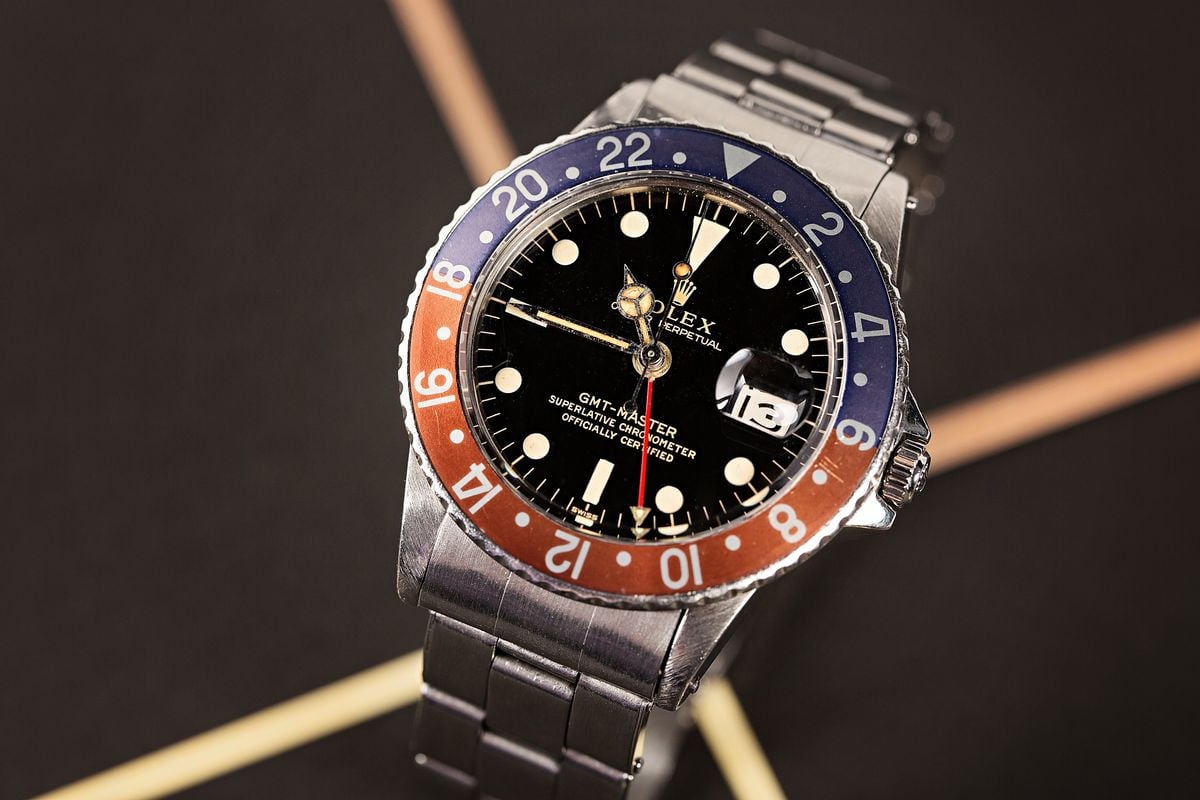 Read the complete history of the Rolex GMT-Master here.

For Rolex, the 1950s were characterized by a bloom of purpose-built sport and tool watches; however, up until roughly the end of the decade, these models were all largely based upon the platform of Rolex’s existing Turn-O-Graph watch. It would not be until the very end of the 50s that these collections would start to develop their own specialized designs, and Rolex sports watches (as we know them today) would start to take on what would ultimately become their present-day forms.

The reference 1675 debuted in 1959 as the follow-up to the inaugural Rolex GMT-Master. With the launch of the ref. 1675, the case diameter grew to 40mm, and crown-guards were added to the side of the case to offer better protection for the winding crown. While Rolex’s iconic pilot’s watch would go through numerous updates and refinements over the years, the blueprint first established by the reference 1675 would go on to define the general design of the GMT-Master collection for the next several decades.

The Rolex GMT-Master 1675 remained in production for a relatively long period of time and continued to be a part of Rolex’s catalog up until 1980. However, despite its long production run, the reference 1675 did not remain the exact same throughout the years, and the watch would undergo a number of updates and changes as Rolex continued to refine and improve upon its initial design.

The very first ref. 1675 GMT-Master watches received glossy gilt dials, small 24-hour hands, and cases that featured pointed crown guards (known as PCG cases). Throughout the 1960s, Rolex started to transition away from these traits, and by the mid/late 1960s, all GMT-Master 1675 watches featured matte dials, large 24-hour hands, and square crown-guards. While the reference number and core functionality of the watch did not change, early examples of the ref. 1675 represent significant aesthetic departures from their later-era counterparts.

This particular Rolex GMT-Master 1675 dates to approximately 1963 and features a PCG case, a gilt ‘Swiss-Only’ dial, a small 24-hour hand, and an original fat-font ‘Pepsi’ bezel insert. The luminous material on the original dial and hands has developed a rich and creamy patina, and the watch is fitted with a vintage rivet-link Oyster bracelet, which makes it an excellent example of an early-production reference 1675 Rolex GMT-Master wristwatch. 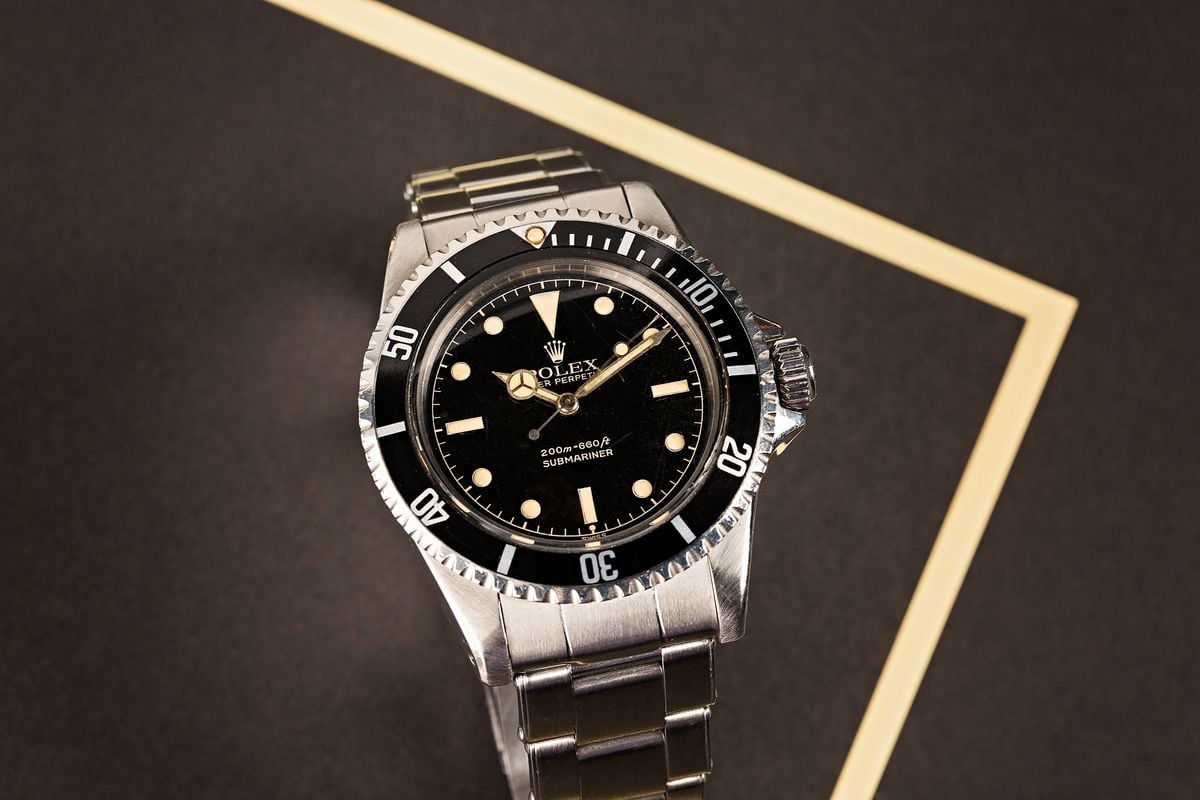 Check out our full history on the Rolex Submariner here.

Just like Rolex’s other legendary sports watch collections, the Submariner did not really come into its own design until the very end of the 1950s. With the launch of the reference 5512 in 1959, the case of the Rolex Submariner grew to 40mm, and crown-guards were added for the very first time. These two traits significantly altered the overall appearance of Rolex’s dive watch, and they have served as defining features of the Rolex Submariner ever since.

Production of Rolex Submariner 5512 lasted until 1978 and just like with Rolex’s other sports watch collections, the reference 5512 underwent a number of changes throughout the 1960s. During its production run, the ref. 5512 Submariner was fitted with a number of different dials, cases, bezels, and bracelets. Early examples were fitted with glossy gilt dials and pointed crown guard cases (PCG cases); however, both of these traits were phased out by the mid/late 1960s and were ultimately replaced by matte dials and square crown-guard cases.

Additionally, even among the early-production gilt dial versions of the Rolex Submariner 5512, there exists a range of further variations in regards to the specific type of gilt dial. This particular watch dates back to approximately 1961, which makes it a very early example of this historic Submariner reference. Like one would expect to find on an early-production reference 5512 Submariner, the PCG case is fitted with a glossy gilt dial; however, it is what is known as a “2-Line” dial since it pre-dates the arrival of the additional two lines of chronometer-certification text – something that defines all later-era examples of the Rolex Submariner 5512.

Additionally, the gilt dial of this particular example has both a chapter ring and an exclamation mark. The ‘chapter ring’ designation refers to the minute track markers, which are connected and enclosed by a circle along their periphery, while the ‘exclamation point’ appears as a small luminous dot located just below the 6 o’clock marker. The exclamation mark is a unique trait that only appears on vintage Rolex sports watches produced during the early 1960s. Although unconfirmed, it is believed that the marking was used to signify that the radiation levels of the luminous material had been adapted to the new Atomic Energy Commission regulations.

Adding to the intrigue and excitement for vintage collectors is the fact that this particular Rolex Submariner 5512 is fitted with a circa-correct rivet-link Oyster bracelet and a ‘Long 5’ bezel insert that still has its luminous pearl intact. Furthermore, the luminous material on the dial and hands have developed a rich and creamy patina, making this watch an excellent and well-preserved example of a rare and important reference from the Rolex Submariner’s history. 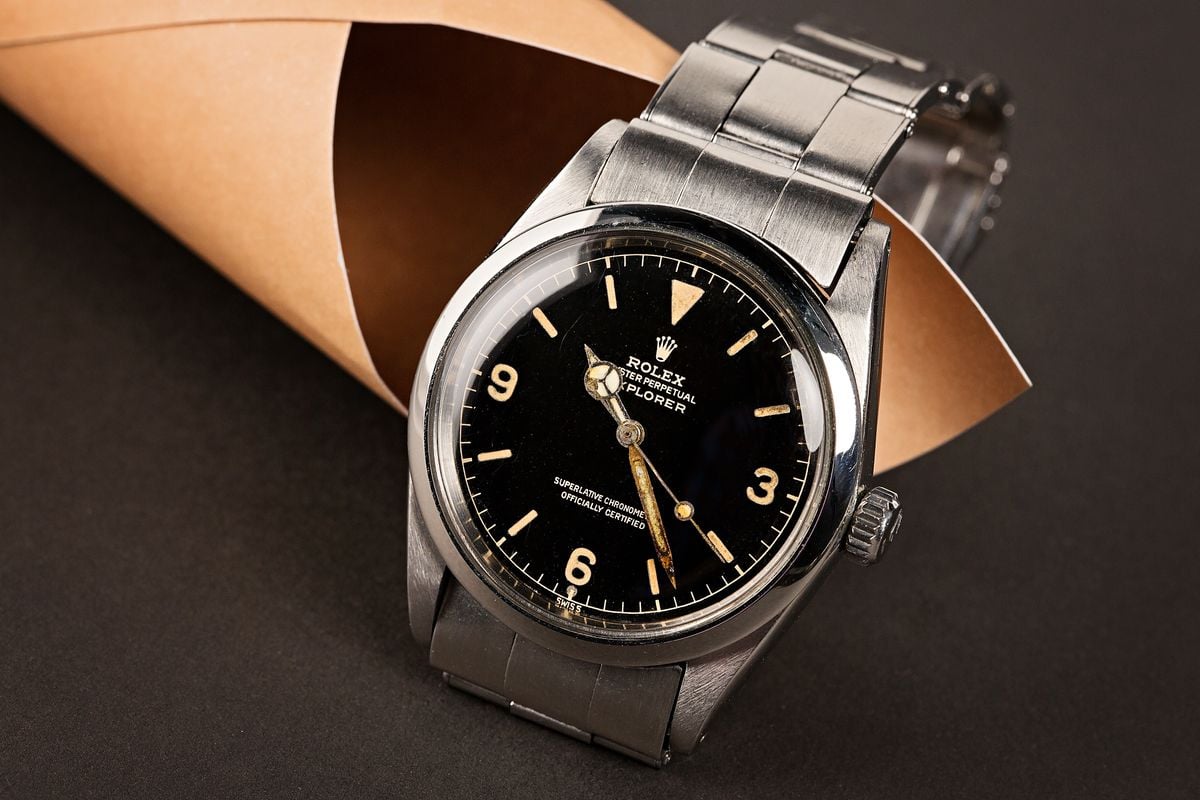 Read our spotlight on the Rolex Explorer 1016 right here.

While the classic Rolex Explorer may lack features or complications that make it specifically suited to one particular sport or environment, the Explorer is Rolex’s original sports watch collection. First launched in 1953 to celebrate mankind’s first successful summit of Mount Everest, the original Rolex Explorer was a highly durable, self-winding watch that was built to the highest possible standards.

Roughly a decade after the inaugural Rolex Explorer first made an appearance, Rolex launched the reference 1016. While a number of different models existed before this, the ref. 1016 solidified what would ultimately become the Explorer’s timeless and signature aesthetic. Today, the Explorer 1016 is considered by many to be the quintessential example of Rolex’s original sports watch, and the reference 1016 is easily the most well-known and fiercely collected Explorer model of all time.

Production of the Rolex Explorer ref. 1016 lasted until 1989, and much like other vintage Rolex sports watches, the reference 1016 was produced with a range of variation in terms of the types of dials and bracelets that were fitted to each watch. The very first examples were fitted with glossy gilt dials; however by around 1967, Rolex had made the switch to matte dials, and this style of dial remained in use until Rolex discontinued the reference 1016 Explorer altogether at the end of the 1980s.

Just like with many of Rolex’s other sports watches that existed during the 1950s and 1960s, there exists a range of variation among the original gilt dials that were fitted to reference 1016 Explorer watches. This particular example dates back to approximately 1963, and as one would expect from a very early example of this historic reference, the watch is fitted with a glossy gilt dial. However, since this Rolex Explorer 1016 was produced during the early years of the model’s production run, its gilt dial also features both a chapter ring and an exclamation point marking, the later of which signifies that its radiation levels had been adapted to the new Atomic Energy Commission standards.

Due to the production years of the reference 1016 Rolex Explorer, only the very earliest examples will be found with exclamation dials, making them incredibly rare and desirable among today’s vintage collectors. Completing the watch is a vintage Rolex rivet-link stretch Oyster bracelet, which helps to make this reference 1016 an excellent example of a timepiece from the golden era of Rolex sports watches.